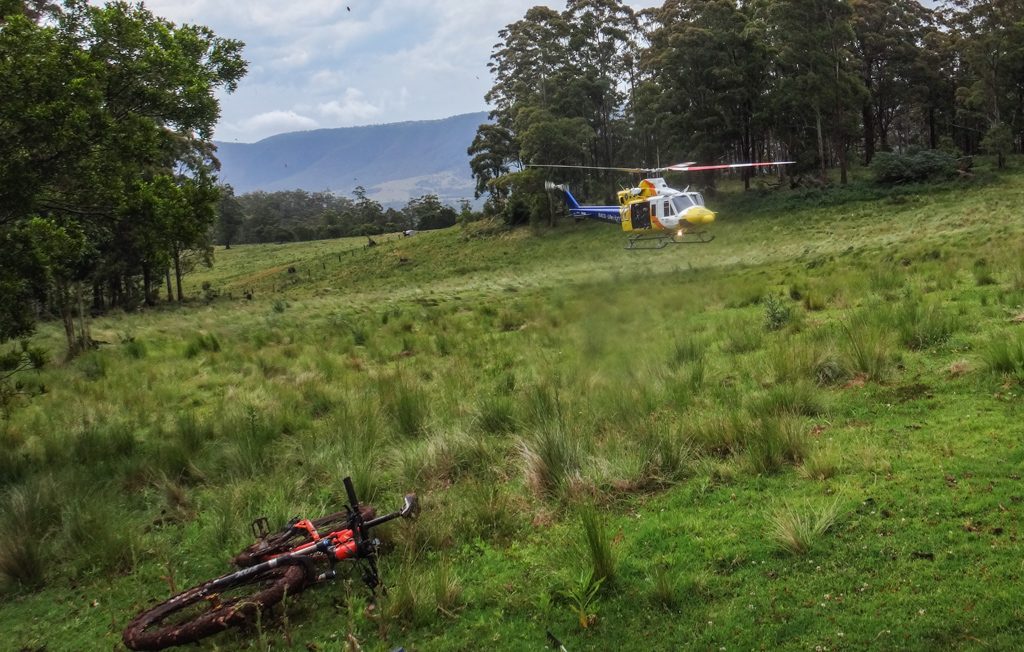 Our social ride to the Steamers didn’t go as planned after someone had a nasty crash and needed to be rescued by the LifeFlight Helicopter. 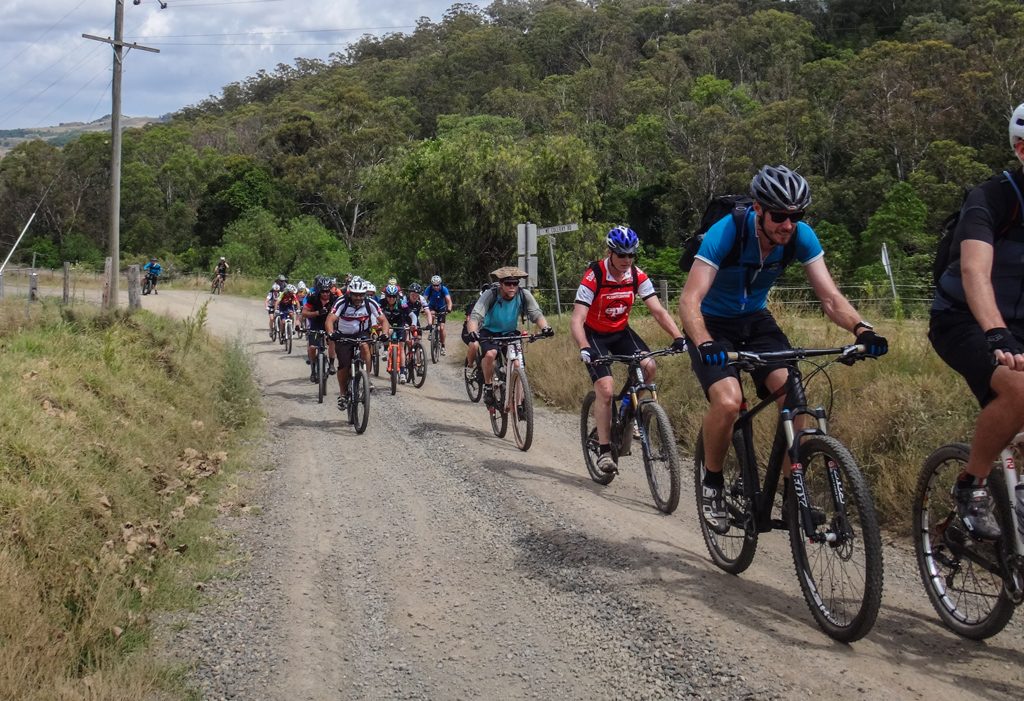 Twenty-nine tough riders started the day at the small town of Tannymorel, on the Southern Downs. 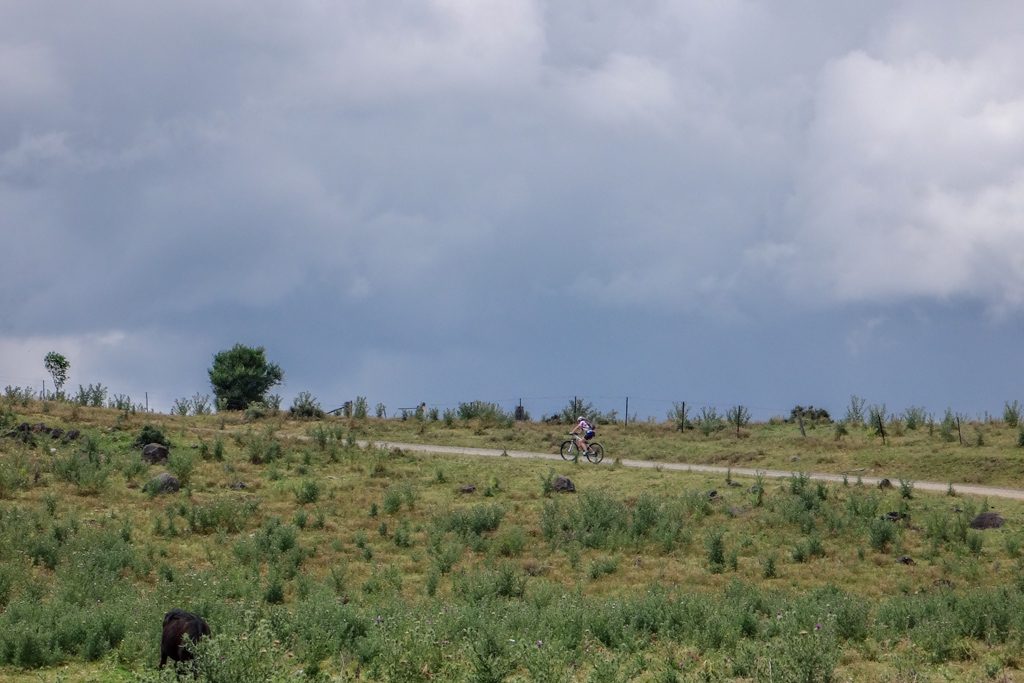 The long slow climb up to Gambubal State Forest stretched us out – each rider pedalling upwards at their own pace. 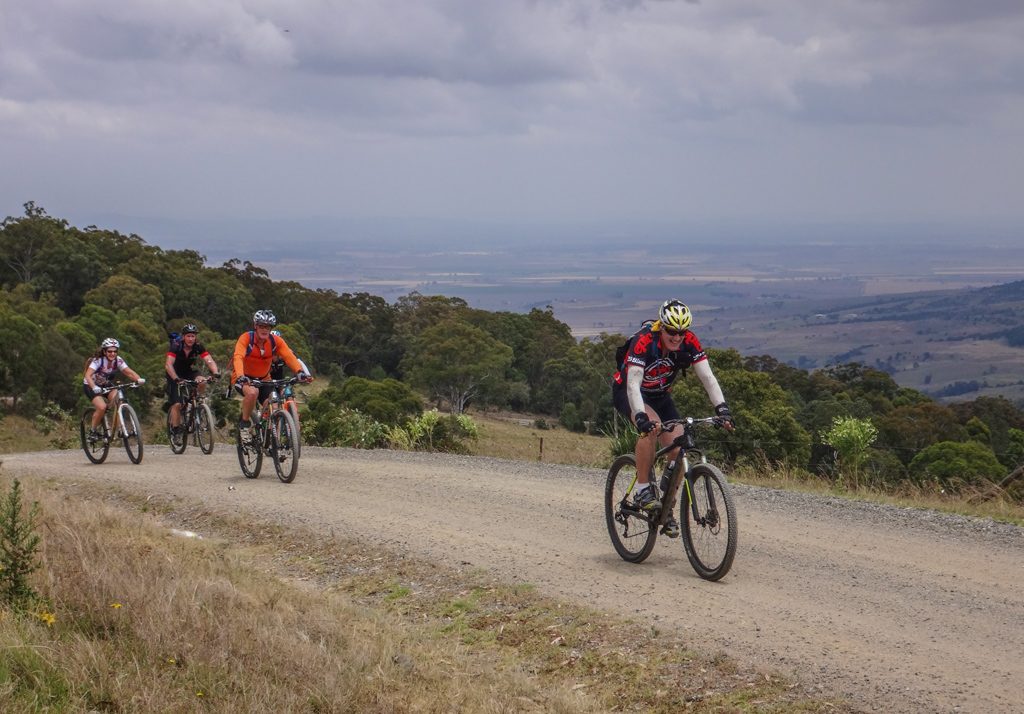 As we climbed, the vast plains of the Darling Downs spread out behind us – an oddly colored table-cloth on a gigantic table. 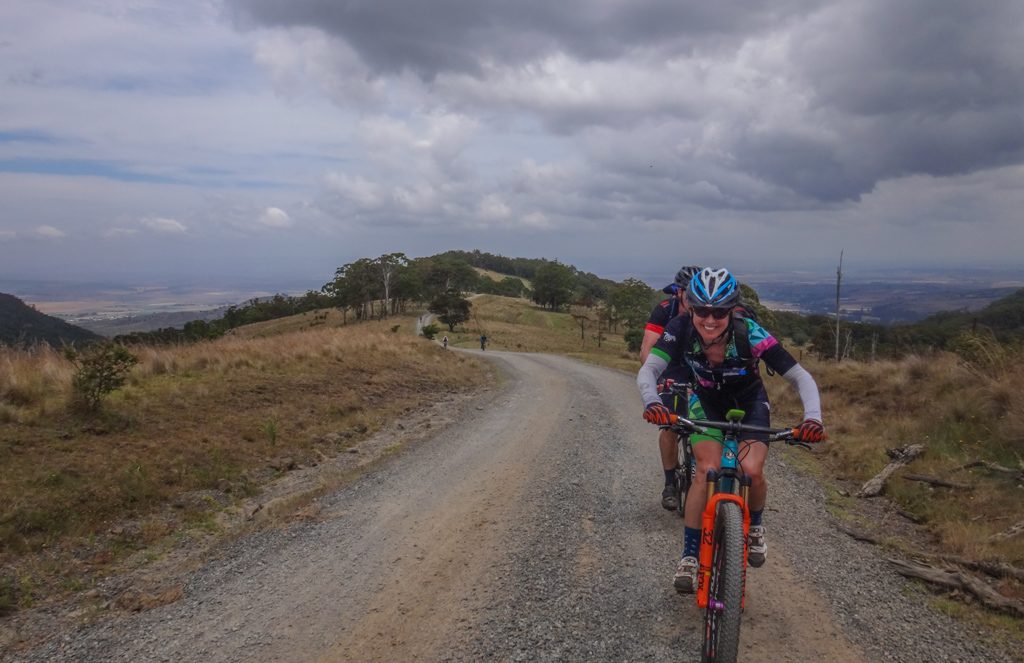 Everyone who turned up today was aware that there would be a challenging two-hour climb.  While climbs like this are hard work, you eventually get into a rhythm.  The slow metronome of each leg alternately pushing down is strangely relaxing.  Pleasant conversations with riding buddies distract you from the hard work, and before you realize it, you’re at the top of the hill. 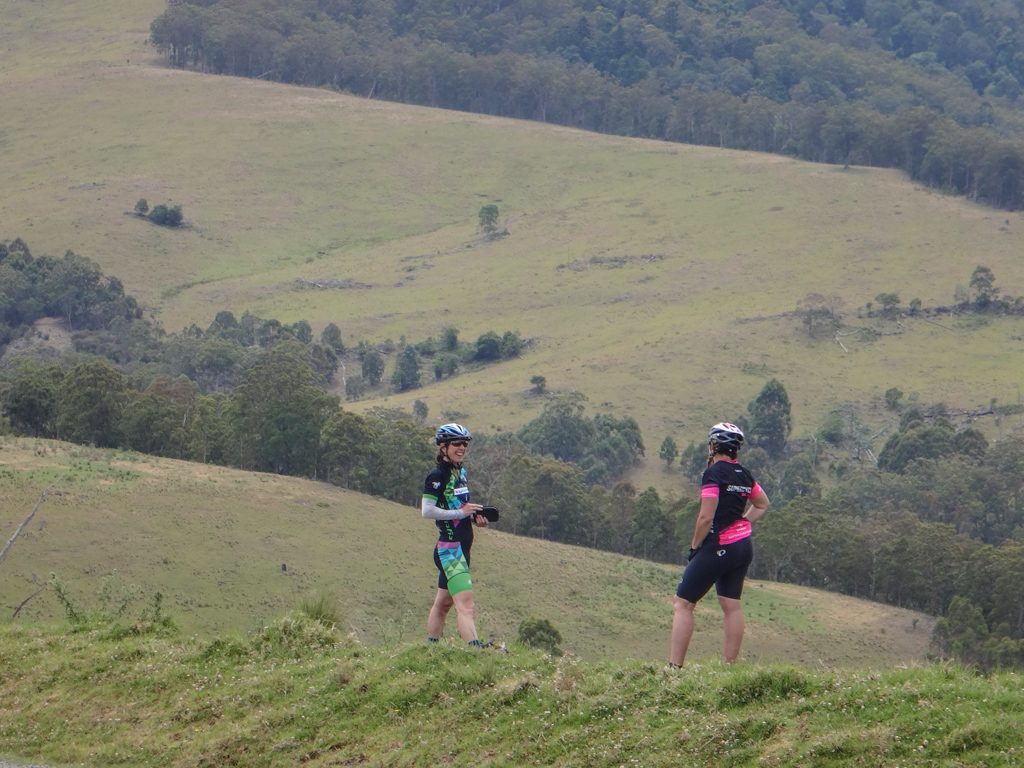 After the first major climb, we parked the bikes at by the side of the road and took a few photos.

Some friendly locals stopped by to say G’day. 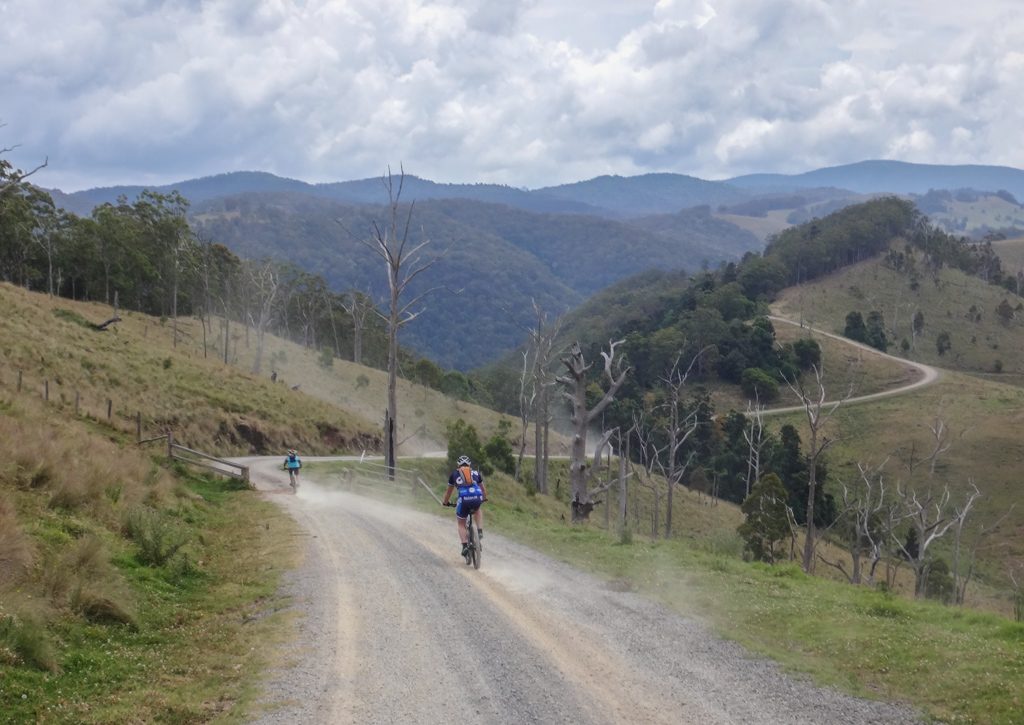 After cooling off for a few minutes, we rolled down the other side of the hill, fantails of dust following our rear tyres.

From here on, the landscape undulated with short periods of coasting followed by more climbing.  But the “big climb” of the day was behind us. 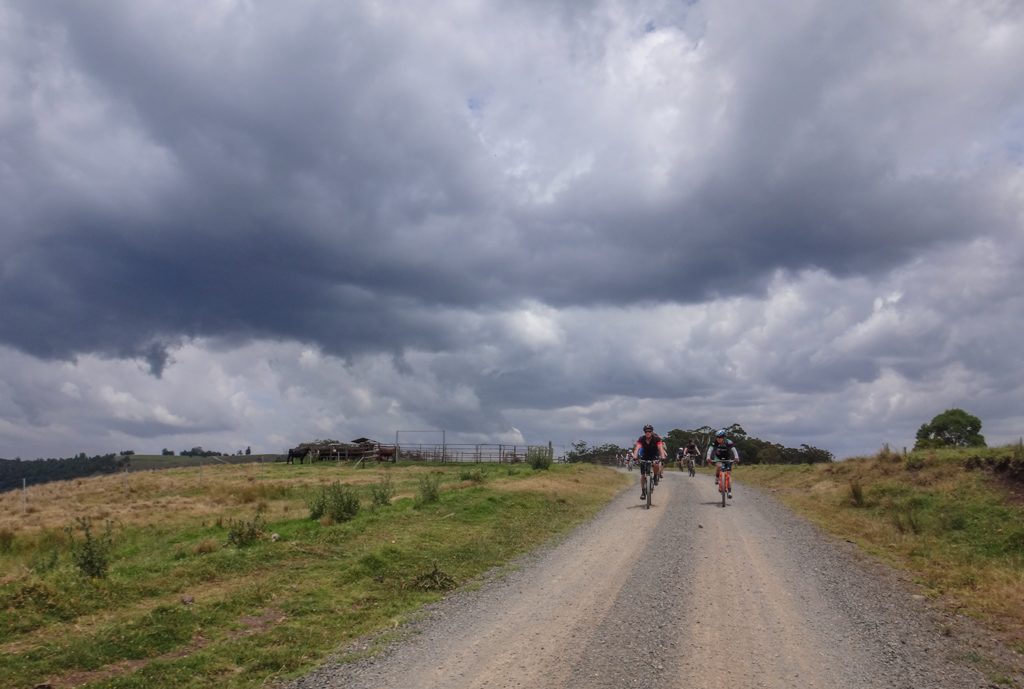 Behind us, dark clouds slowly rolled in from the west.  But as the Norwegians say “There’s no such thing as bad weather, only bad clothes”.  We had all packed rain gear, so we weren’t too intimidated by the threatening greyness.

We stopped for a quick bite to eat at the top of Hoffman Falls.  A few minutes downstream from here the water plummets over one hundred metres over a cliff.  One or two people wandered down to have a look… 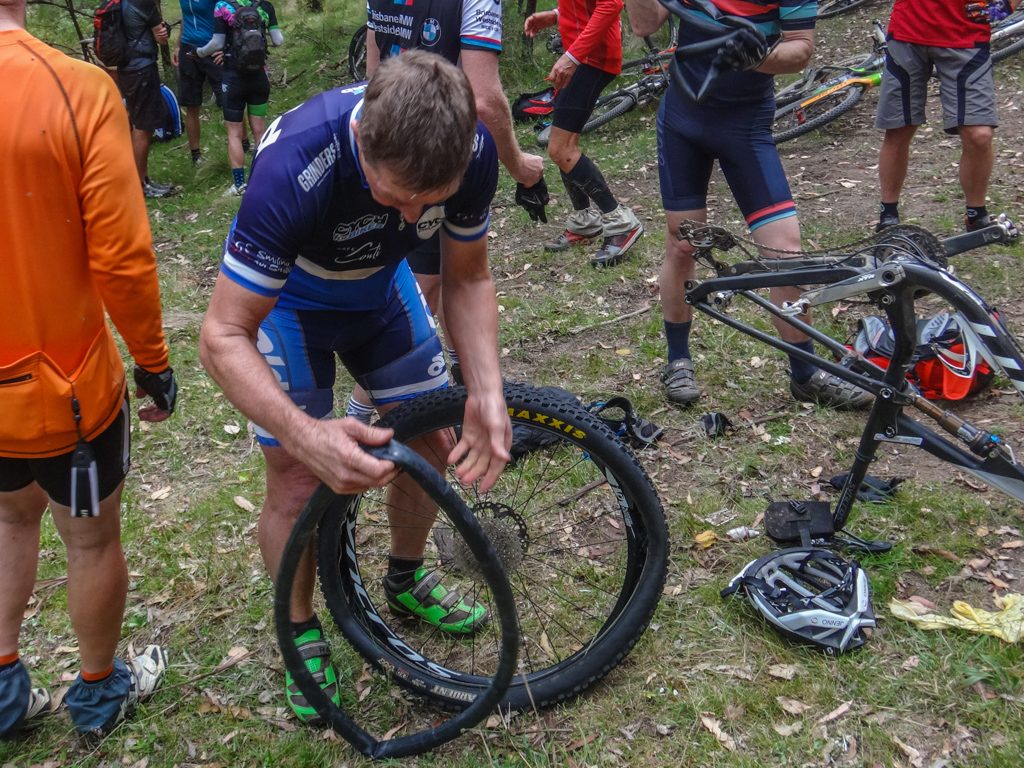 Others like Jenno repaired a few mechanical problems while others stood around offering friendly advice and commentary on his repair technique. 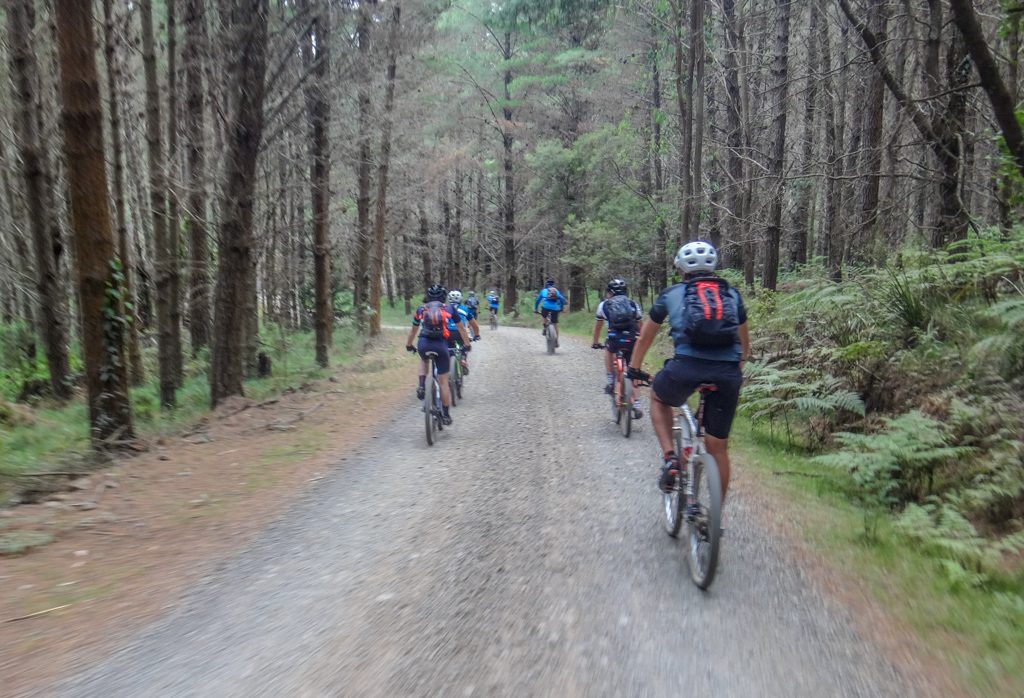 After the falls we entered the State Forest.  The terrain changed abruptly from rolling plateaus to thick pine plantations. 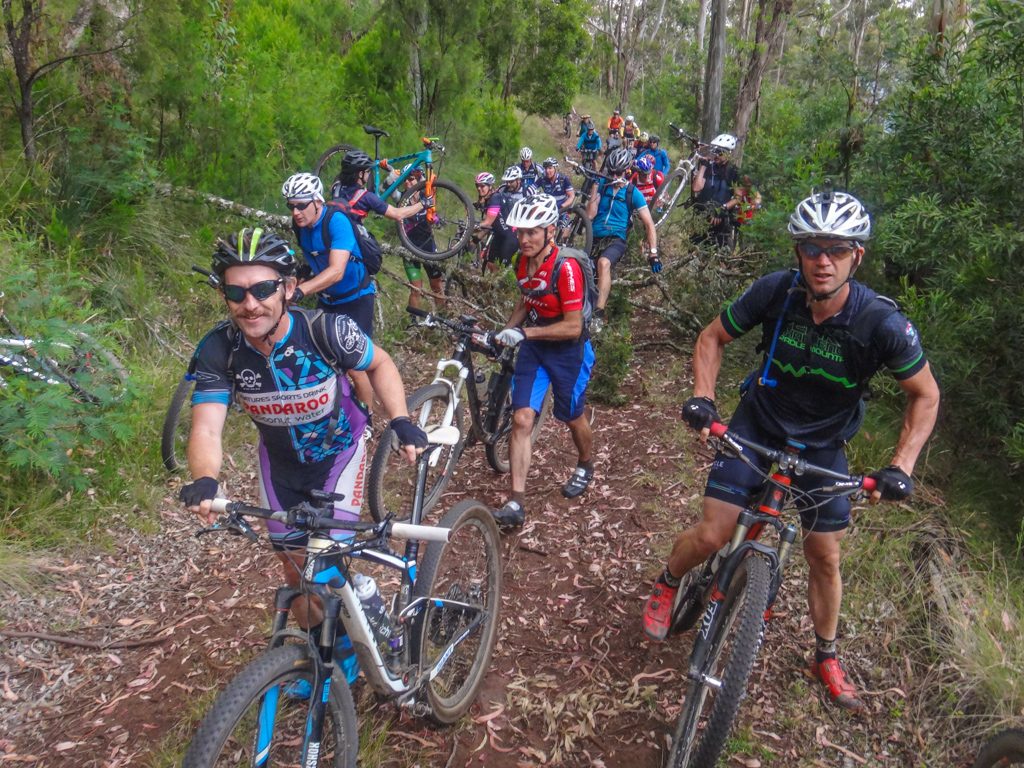 Eventually we reached the escarpment overlooking the Emu Creek valley.

“This is rough and steep,” I cautioned.  “There are lots of sticks lying around that could easily go through your spokes.”

We clambered over some fallen trees and made our way slowly upwards to the highpoint of the ride, Bald Mountain.

As we approached the summit the rain began to fall.

We had reached 1,197 metres above sea level.  You don’t often get to ride a bike on trails this high.

The view was impressive, but the clouds were quickly closing in.

We broke out our rain jackets, took a few quick photos, then jumped on the bikes to roll back down the hill.

Nick, who climbs hills quicker than I do, had arrived a few minutes earlier and managed to grab this quick picture just before the rain obscured the view.

Then the hail started to fall…

…the views were fantastic, but we needed to get out of the storm.

Damian got a stick through the spokes on his front wheel.  It locked up and threw him over the handlebars.

He was semi-conscious, with head injuries,  short-term memory loss and was experiencing difficulty breathing.

Due to our remote location, and the severity of Damian’s injuries, we decided to call an ambulance, explain the situation and follow their advice.

The operator immediately dispatched a helicopter and an ambulance.

We slowly helped Damian to a nearby clearing where the chopper could reach him.

I was worried – for Damian, but also for the helicopter crew.  We were on top of a mountain in a storm surrounded by clouds.  What if something went wrong?

I spoke with the pilot of the chopper on my phone.  I could hear him in the valley below us, but couldn’t see him.  He couldn’t see us.

“You’re south-west of us.  South.  Getting further away.  Now you’re getting closer.  Wow!  Now I can see you.”

This was amazing.  I was talking a helicopter in over the phone.

The LifeFlight helicopter arrived.  I stood slack-jawed at the skill of the pilot as he brought his aircraft down through the clouds and into the clearing. 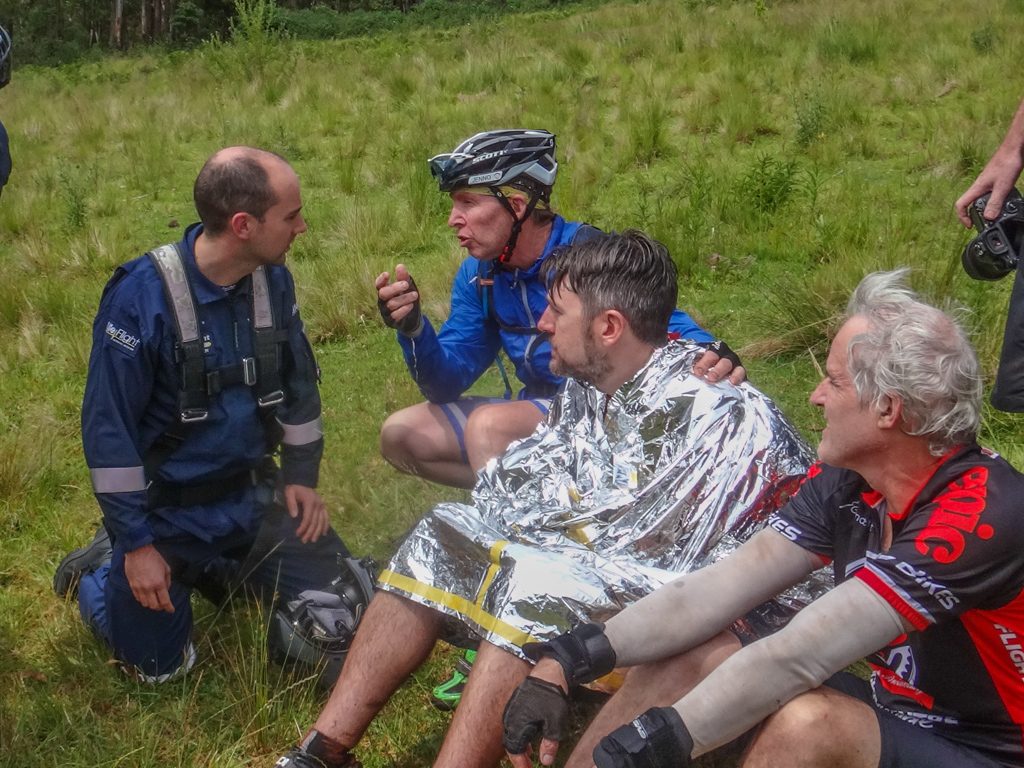 A doctor and paramedic emerged from the aircraft, walked across the field, removed their helmets, introduced themselves, then started tending to Damian.

We’d made the right decision.  Damian was in safe hands.  I felt relieved.

We helped Damo across the field and into the chopper. 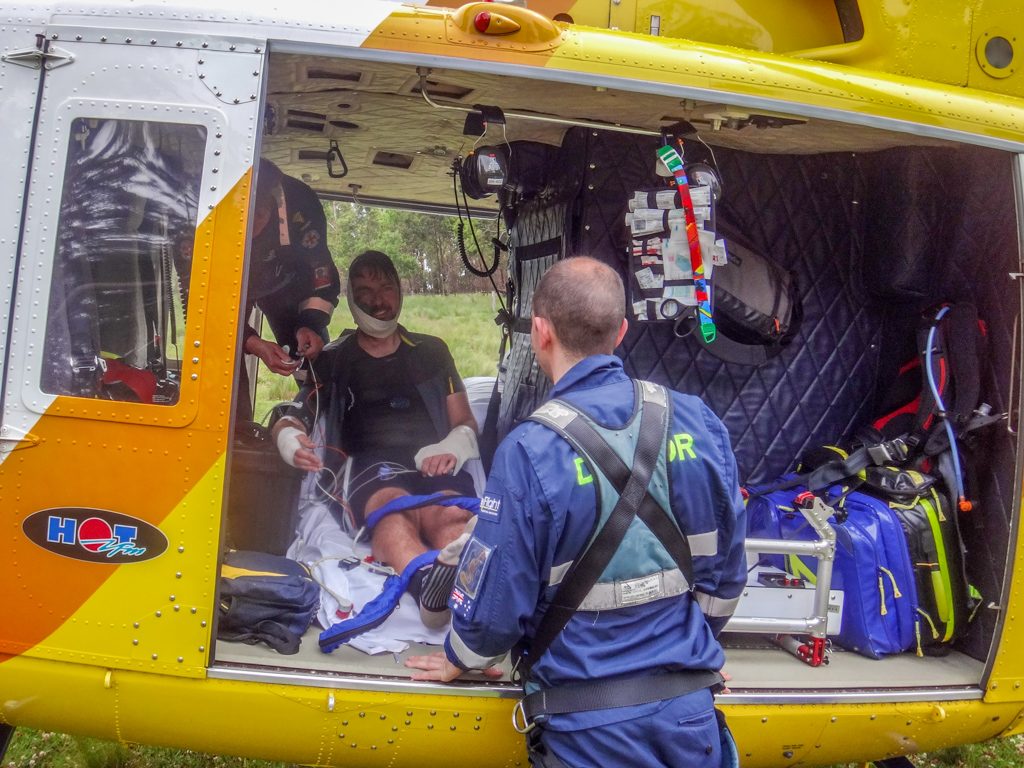 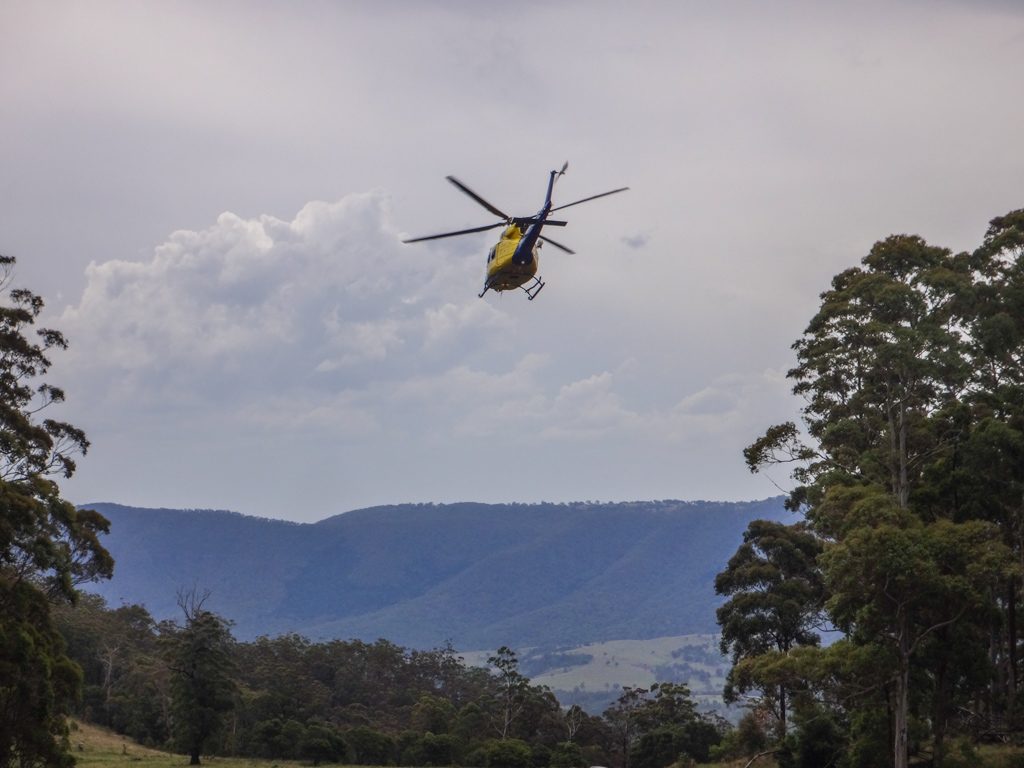 Then as quickly as it had arrived, the LifeFlight chopper had gone, carrying its precious cargo off to hospital. 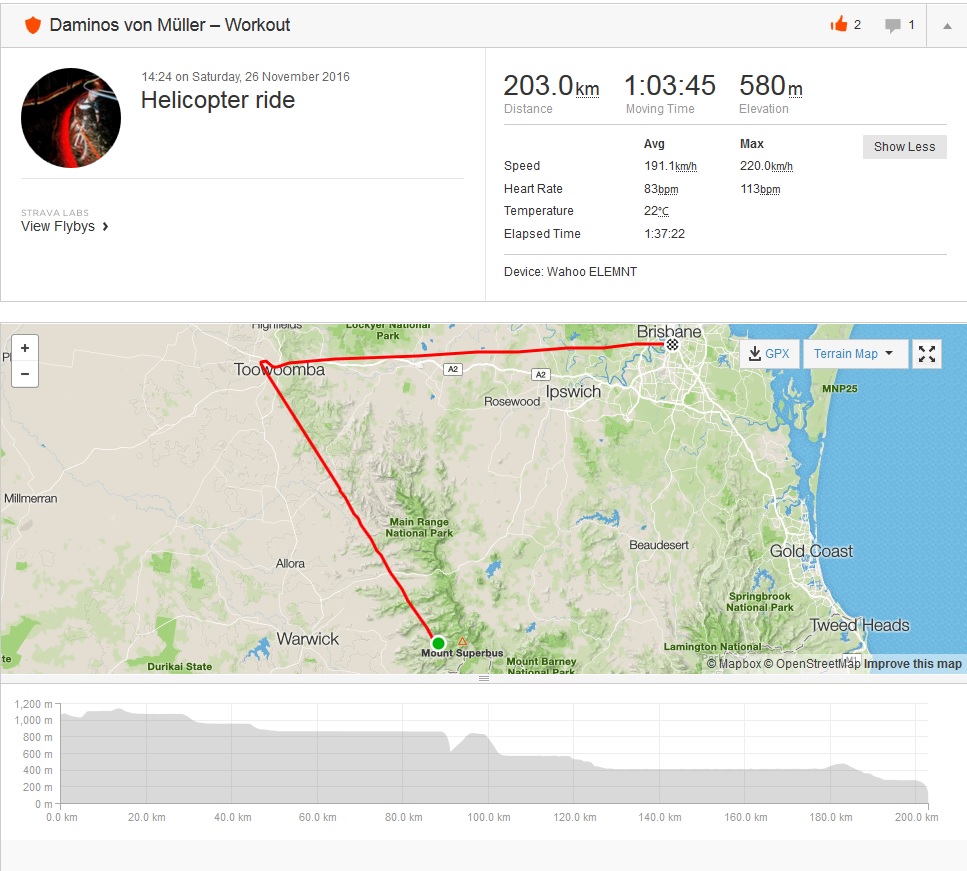 Like any good mountain-biker would, Damian left his Strava app on so he could track the flight from Bald Mountain to Brisbane.  Because the chopper had taken so long to find a gap in the clouds, they needed to refuel at Toowoomba before continuing to Brisbane. Rather than complete the course I had planned, we decided to retrace our steps back to the start.

The rescue had added almost two hours to our riding time, and we needed to get back as quickly and as safely as possible. 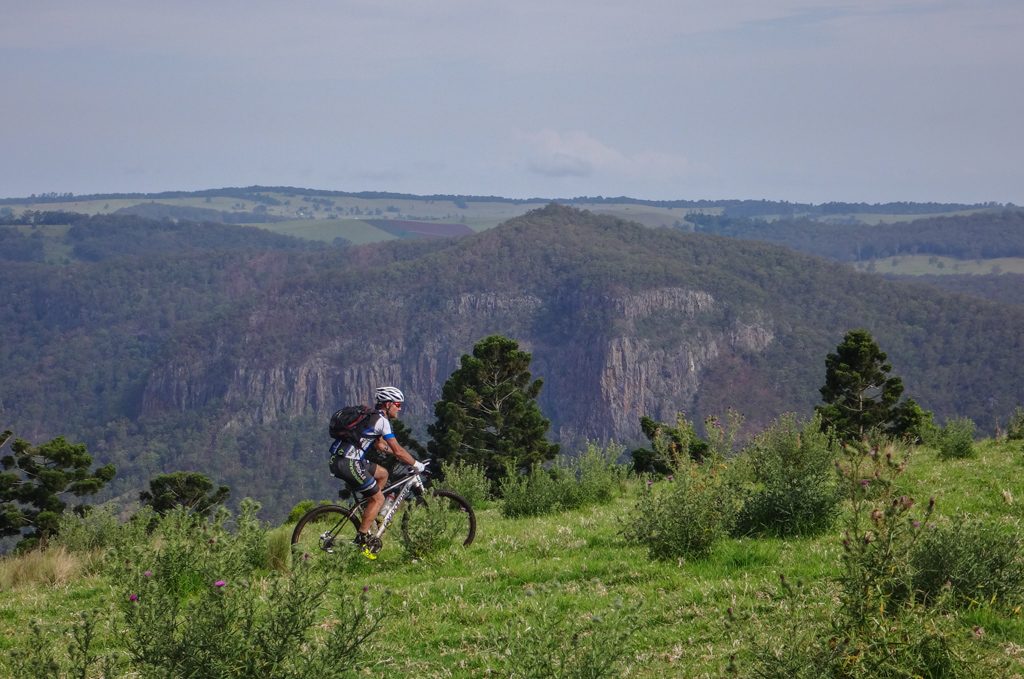 The scenery unfolded in reverse, which gave us more chances to enjoy the views we had missed earlier in the day.

What had been rapid descents earlier in the day were now slow uphills.

On the way down we met the ambulance from Killarney on its way up the hill.  The ambo’s had come up the mountain just in case the chopper wasn’t able to rescue Damo.  We let them know he was now safe.  They turned around and headed home.

We rocketed down hills which had taken us ages to climb.

At the Yangan pub, Peter realized he had an SMS on his phone from one of the LifeFlight aircrew.  This meant he had a number.  We all raised a glass to our rescuers, then Peter sent it off.

Almost immediately, we received a reply from the aircrew. 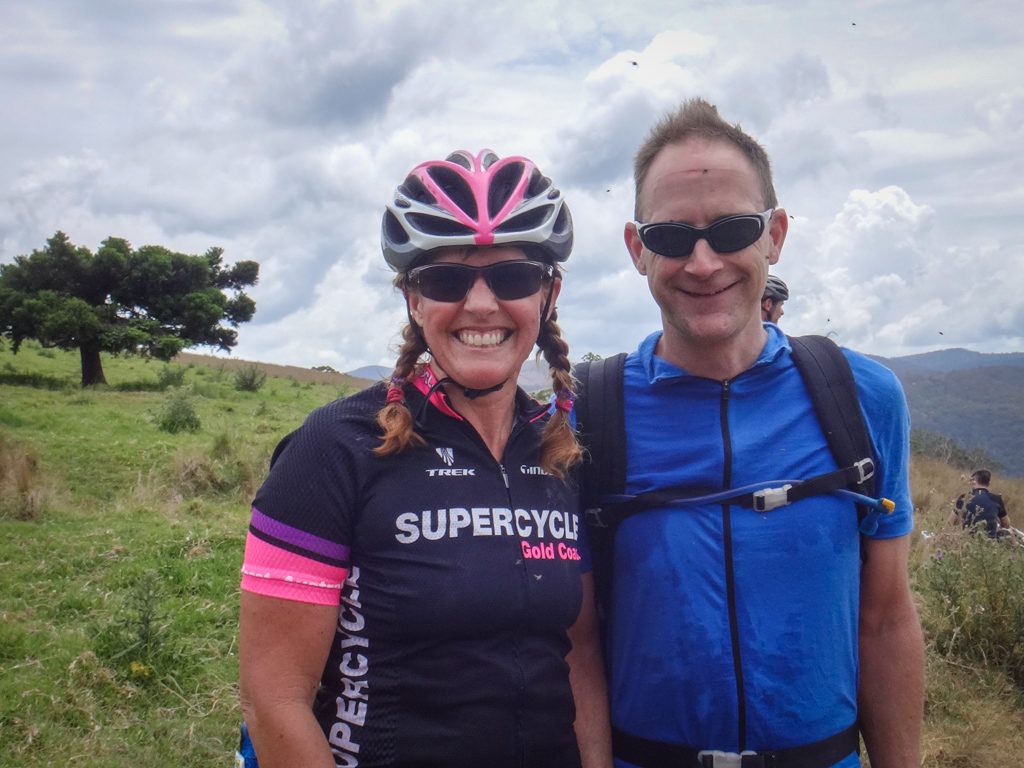 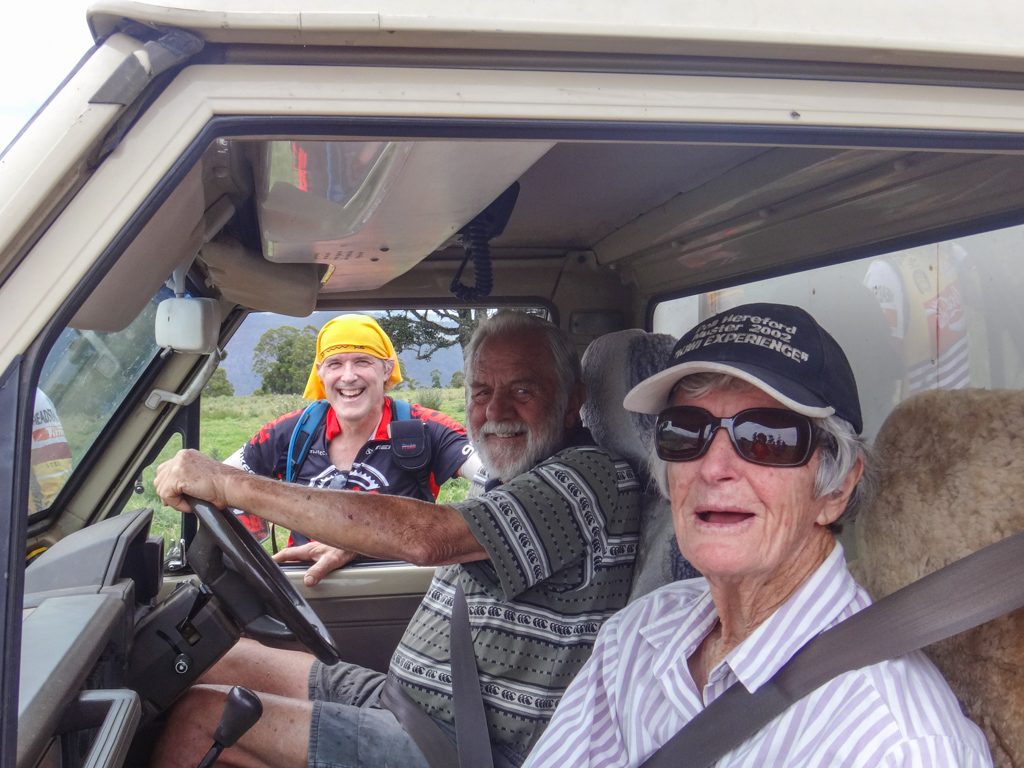 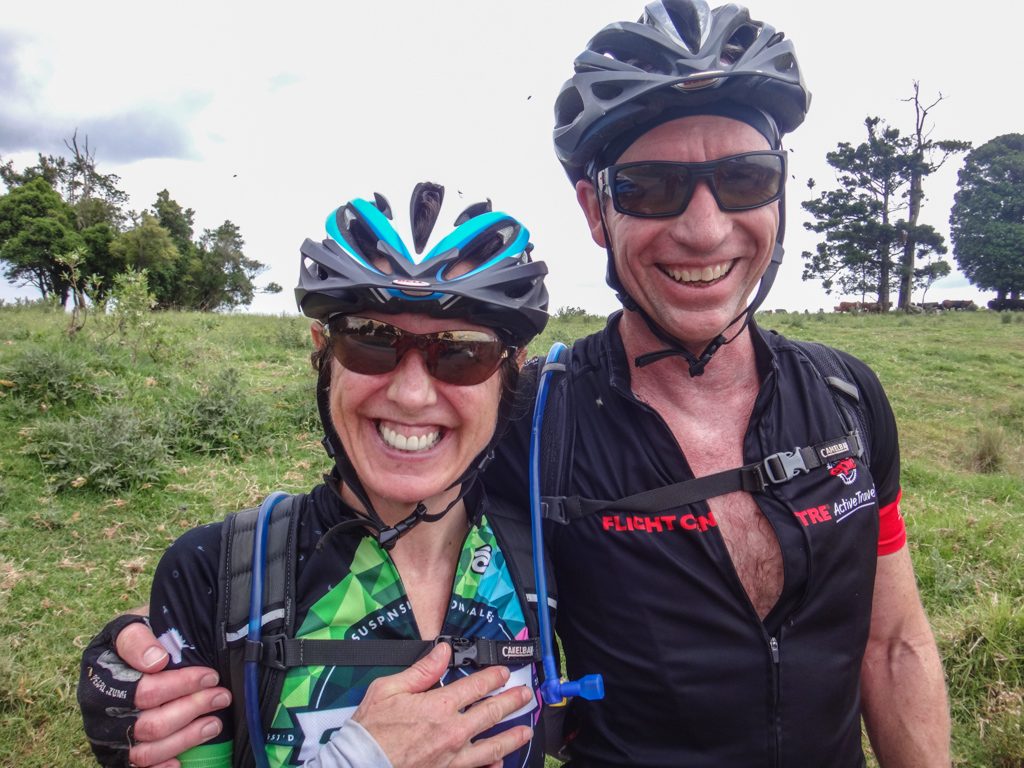 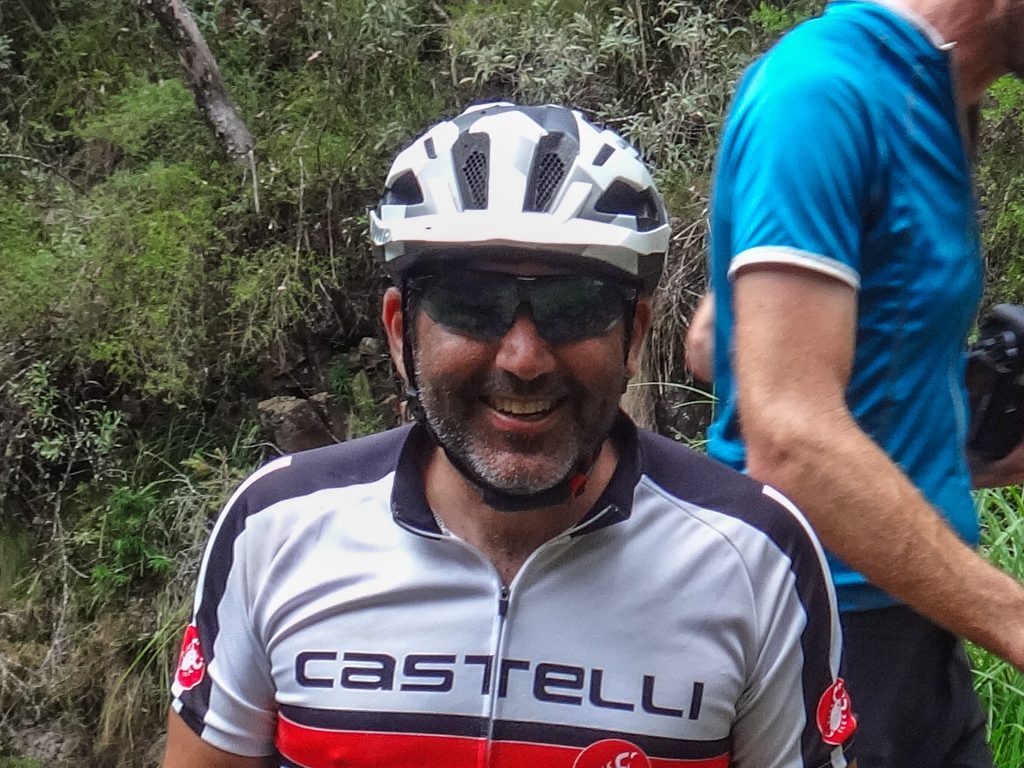 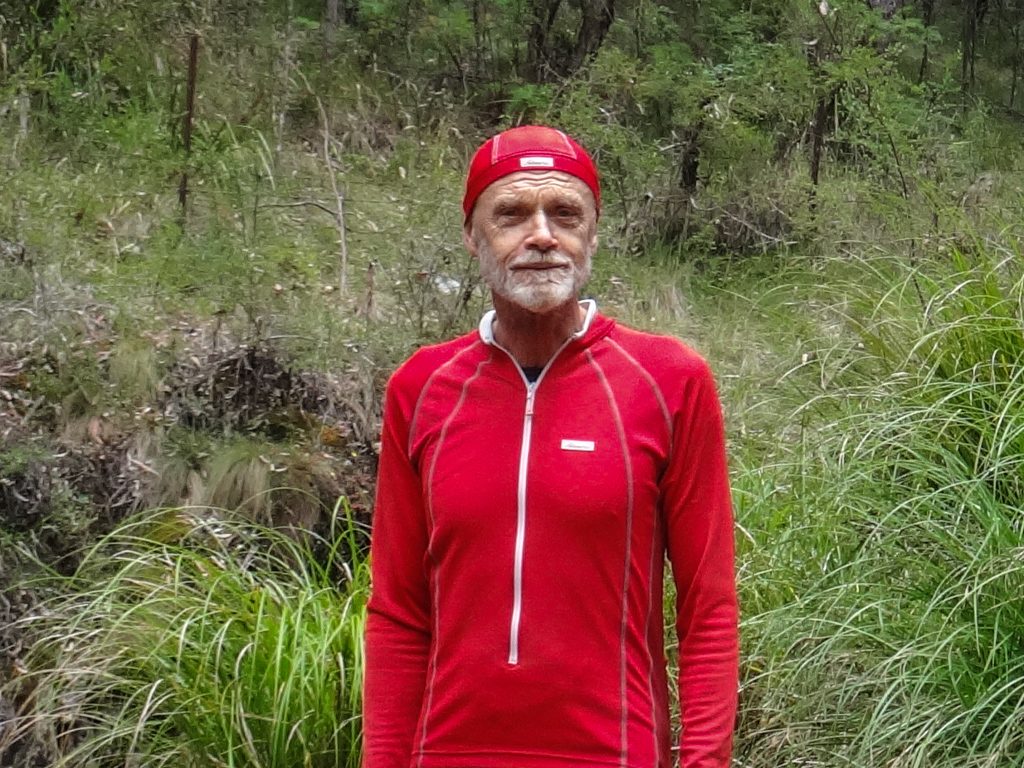 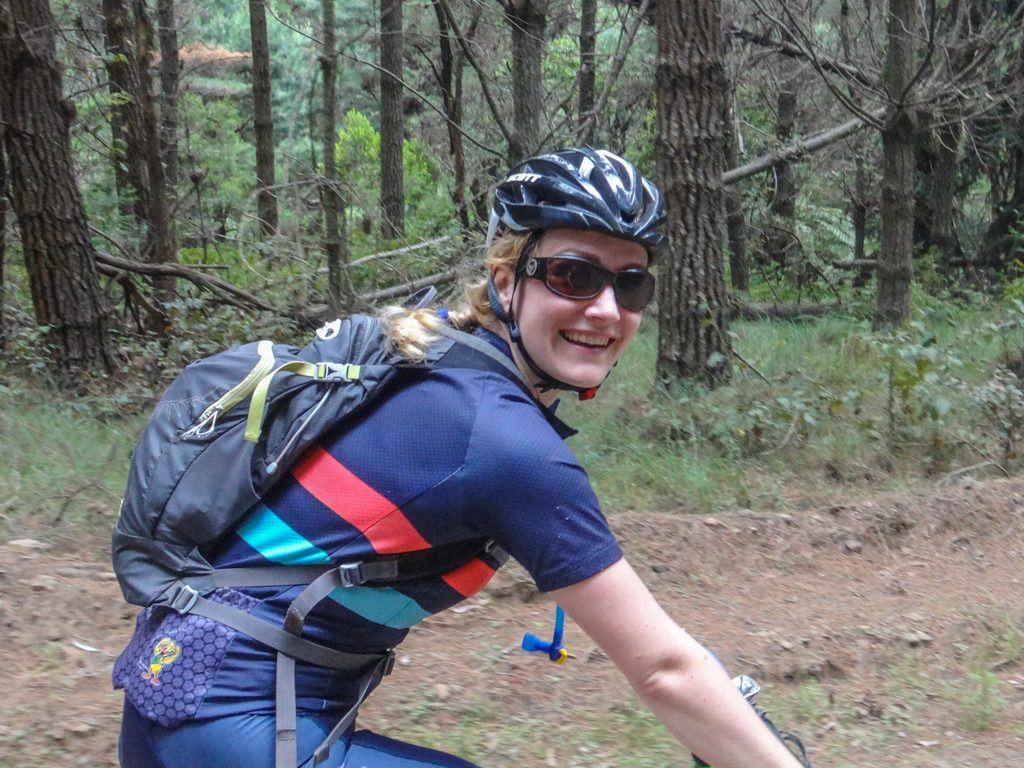 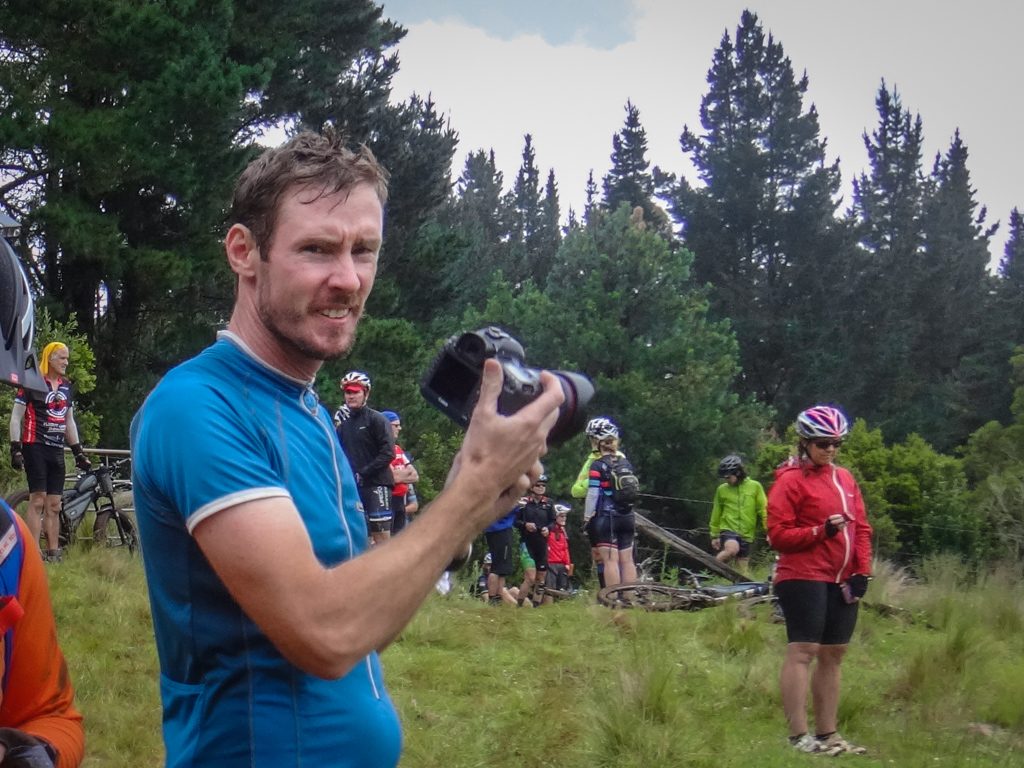 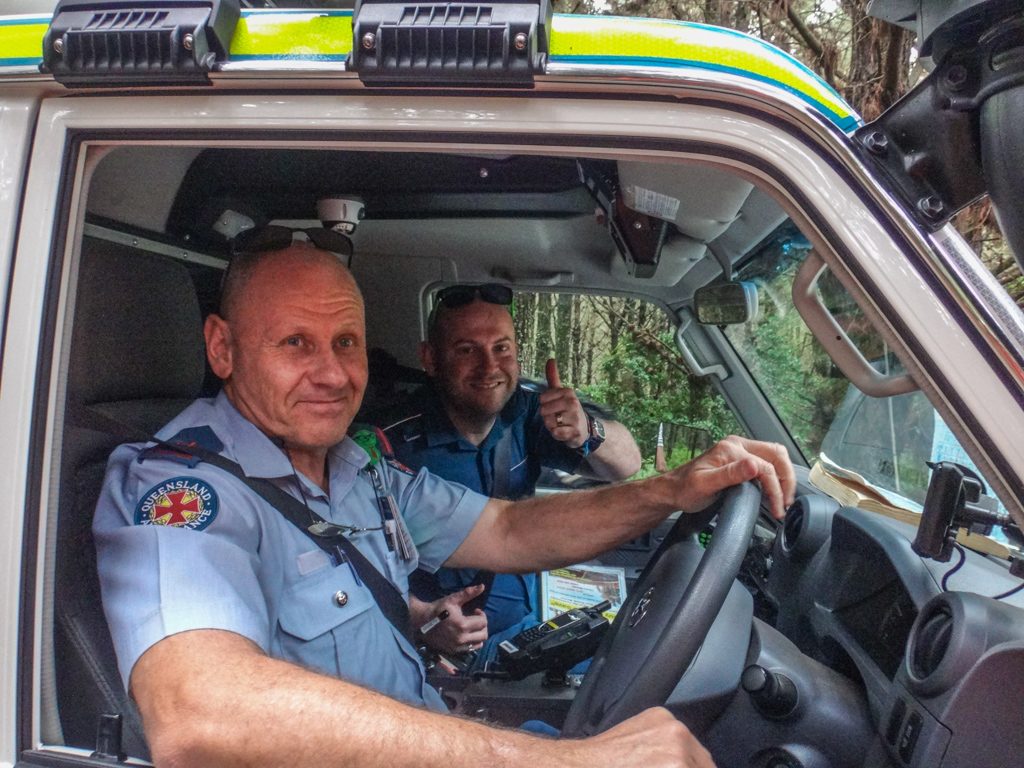 Thanks everyone for being part of a memorable day.

All up we rode 53 kilometres in 7 hours, climbing almost 1,350 metres in vertical ascent.

Here’s what we learned:

I also learned that I have amazing friends.  When things needed to be done, everyone worked as a team.  Some rode back to get cars, some looked after the injured, some contacted emergency.

Thank you to everyone for taking part in the ride, and for helping out when we needed you.

UPDATE: Damian is now safe at home and recovering after two days in hospital.

Mountain and Plain
Gambubal
Under the Steamers
Spicers Peak
Lantana