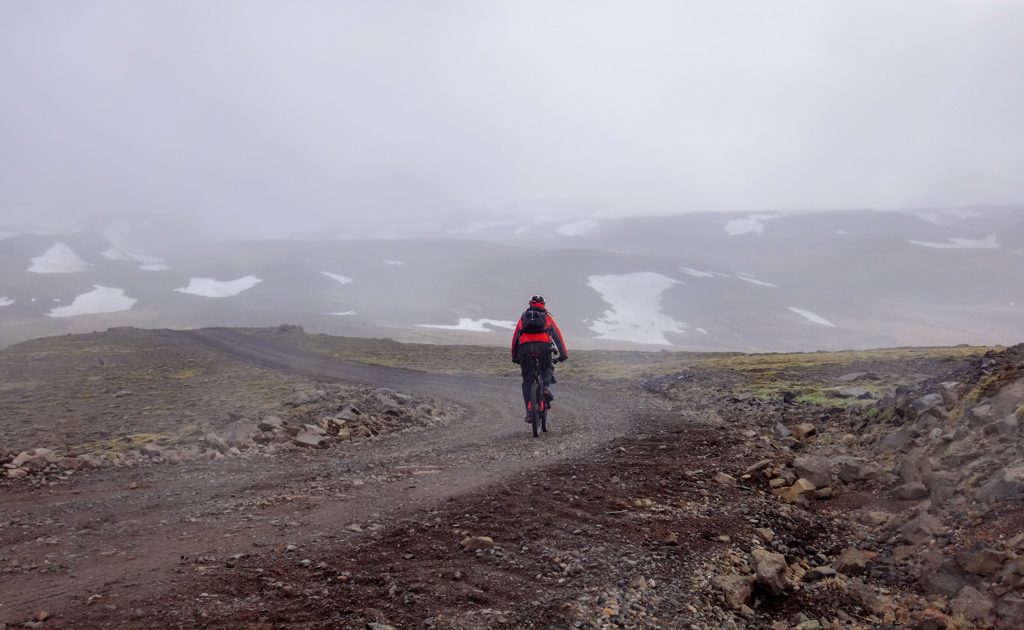 For my final ride in Iceland I wanted to get as close as I could to a large glacier in the west of the country. 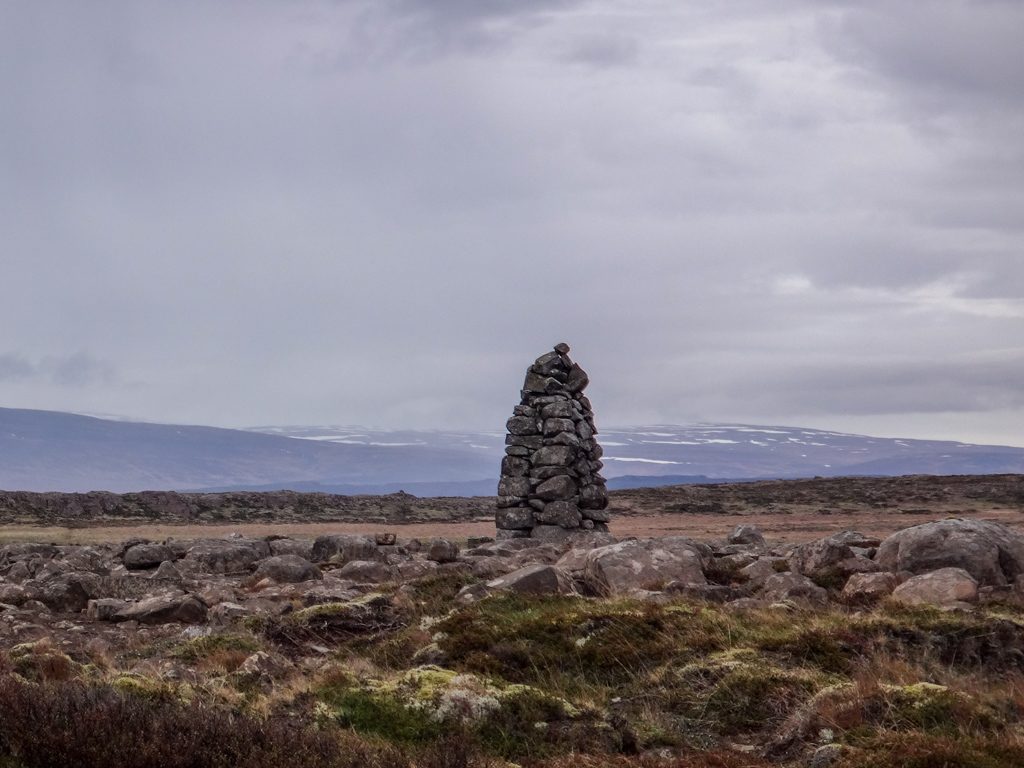 Snæfellsnes is a picturesque peninsula in the west of the country.  “Snæfells” (pronounced “SNIGH fettles”) literally means “Snow mountain”. 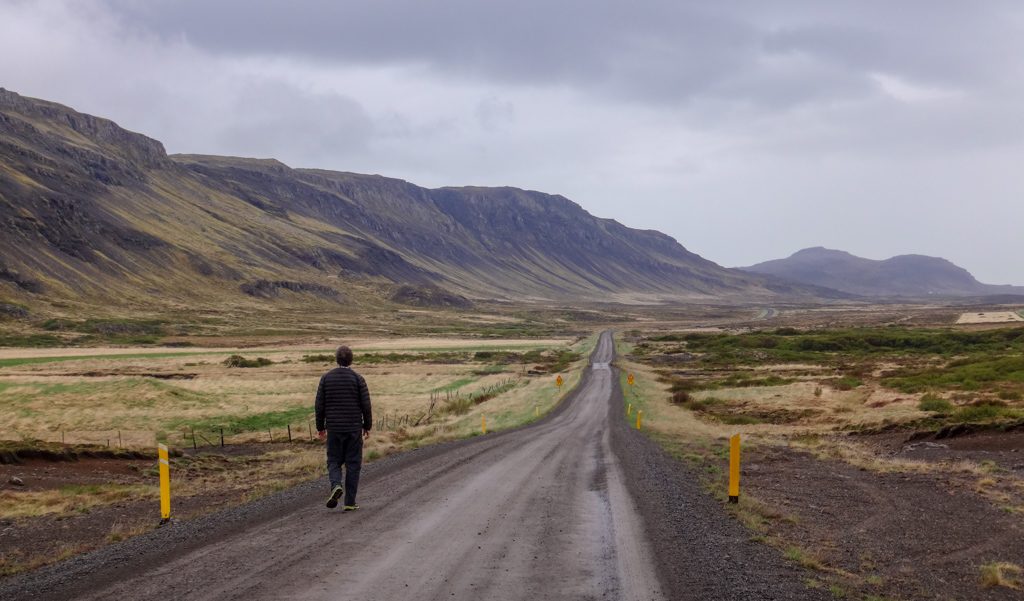 Liz and I spent a day wandering around this amazing place, simply soaking up the views. 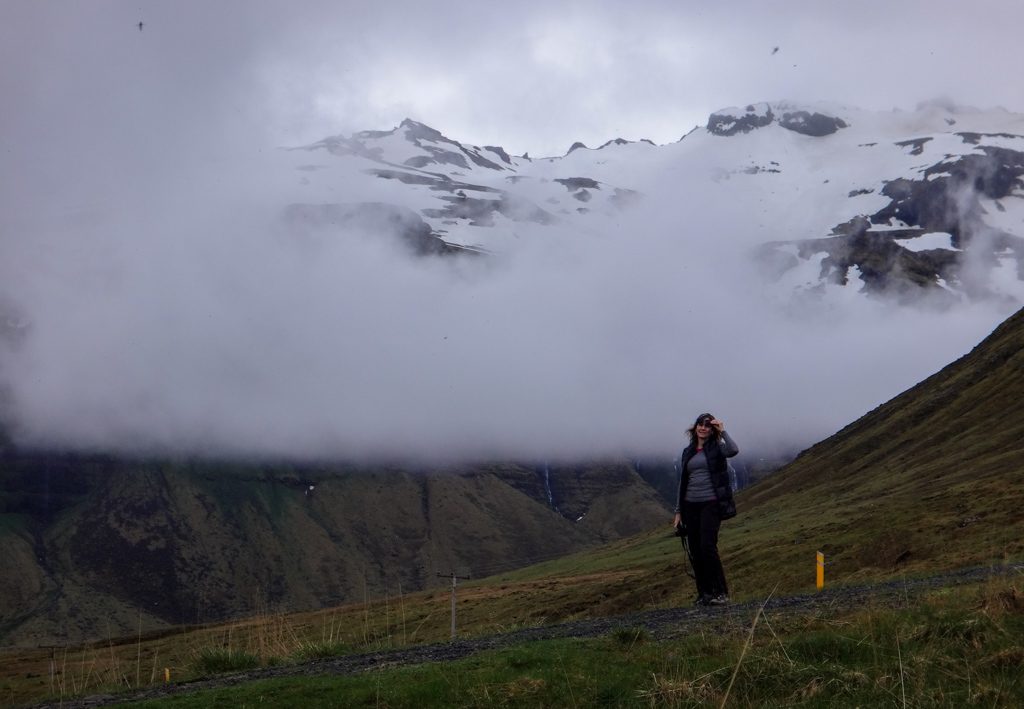 This mountainous finger of land boasts a variety of terrain.  It’s like a summary of the entire country in one small section.  There are waterfalls, snow-capped peaks, … 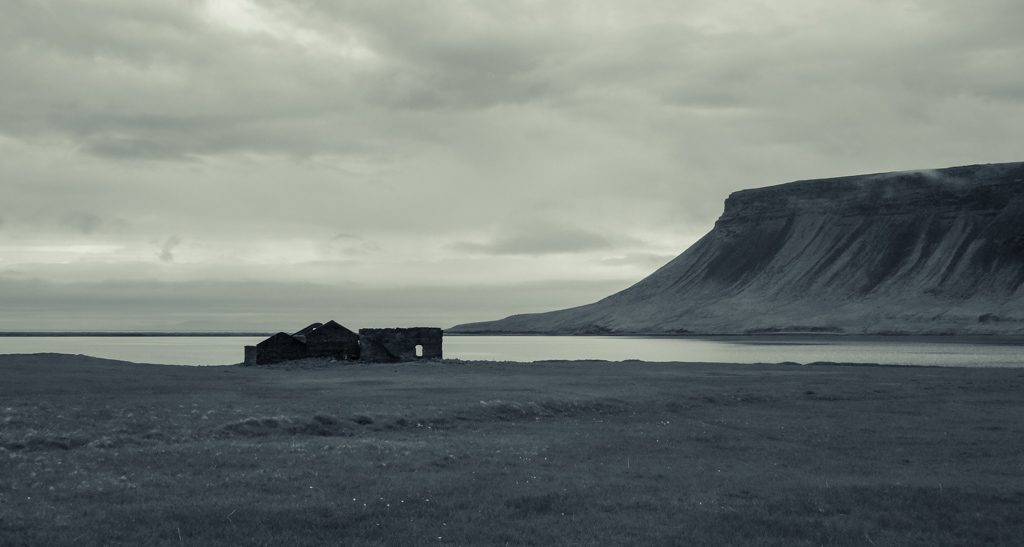 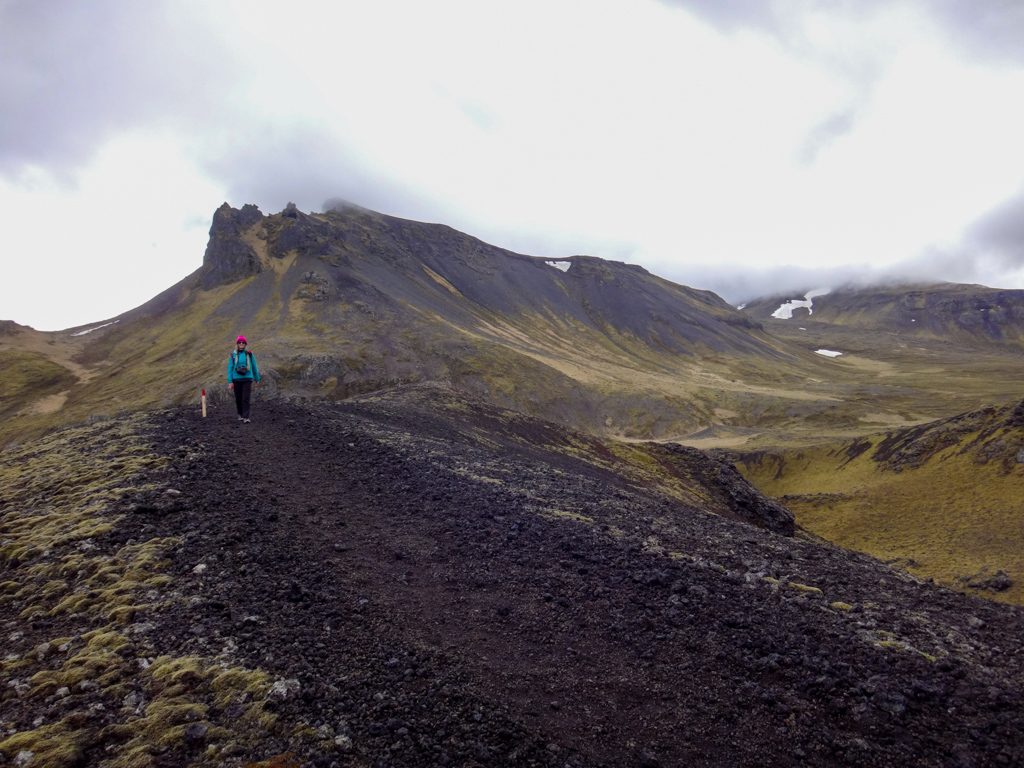 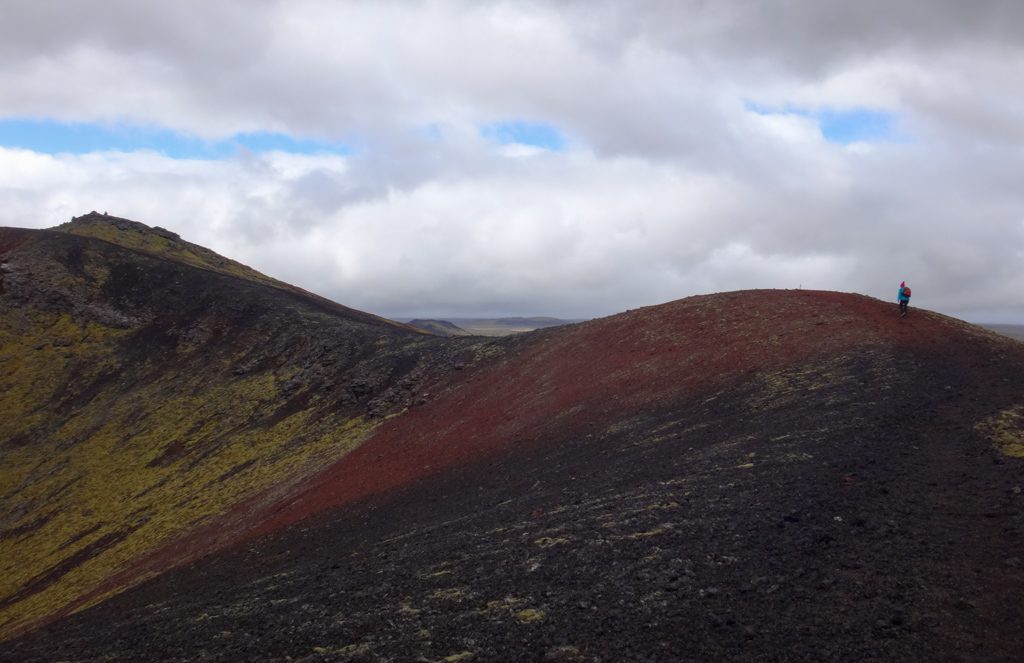 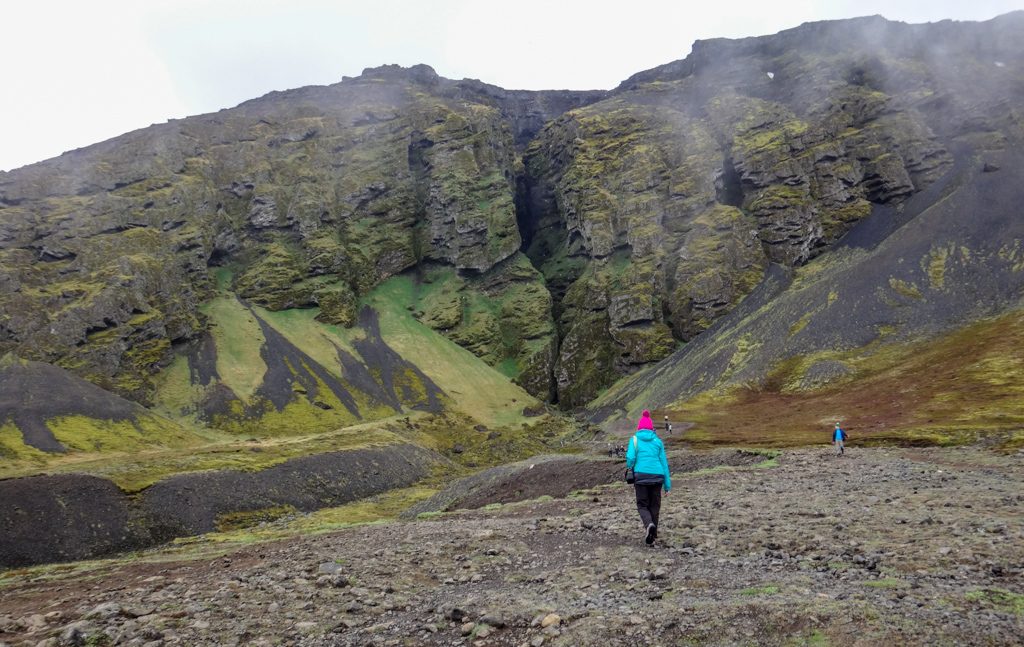 A few kilometers down the road we encountered a narrow canyon in a cliff, with icy water gushing from it. 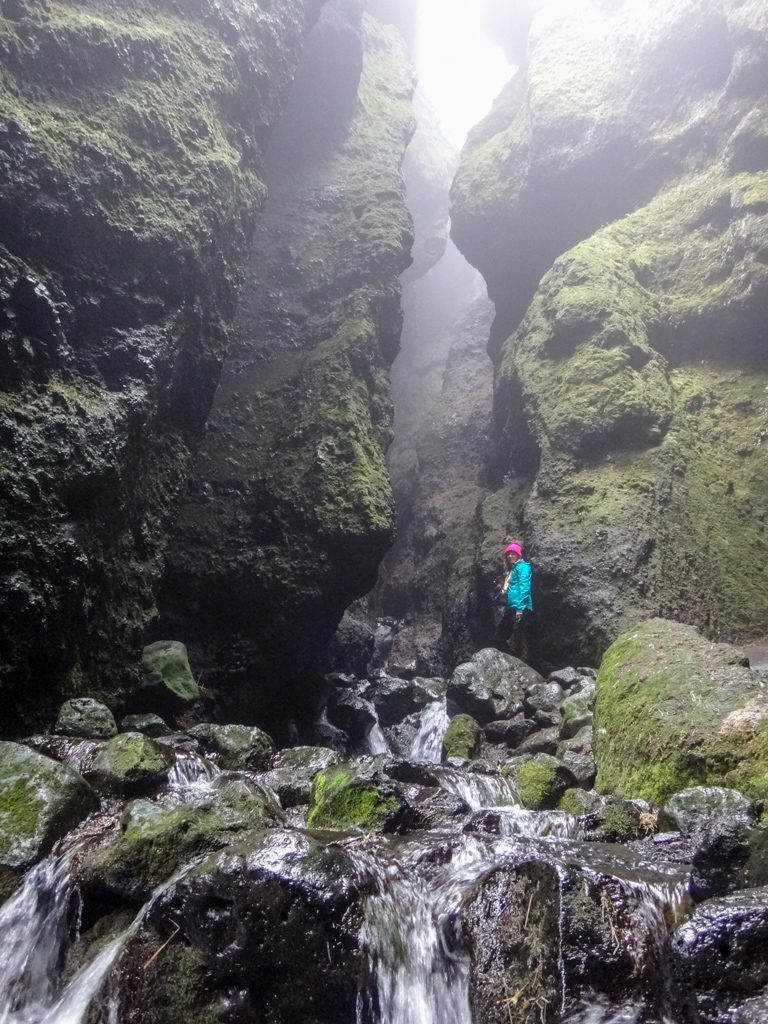 A hundred metres above us, flocks of birds swirled in the mist.  This place was stunning. 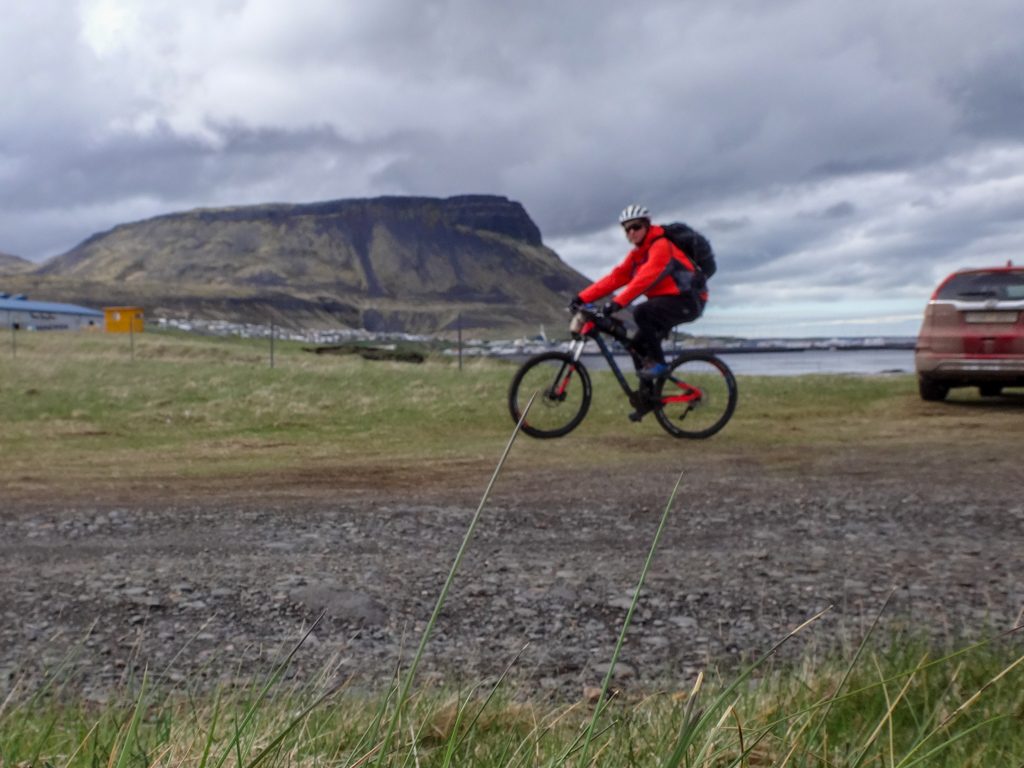 So I decided to come back a couple of hours later to explore it on the bike.  I started near the small town of Ólafsvík and headed upwards. 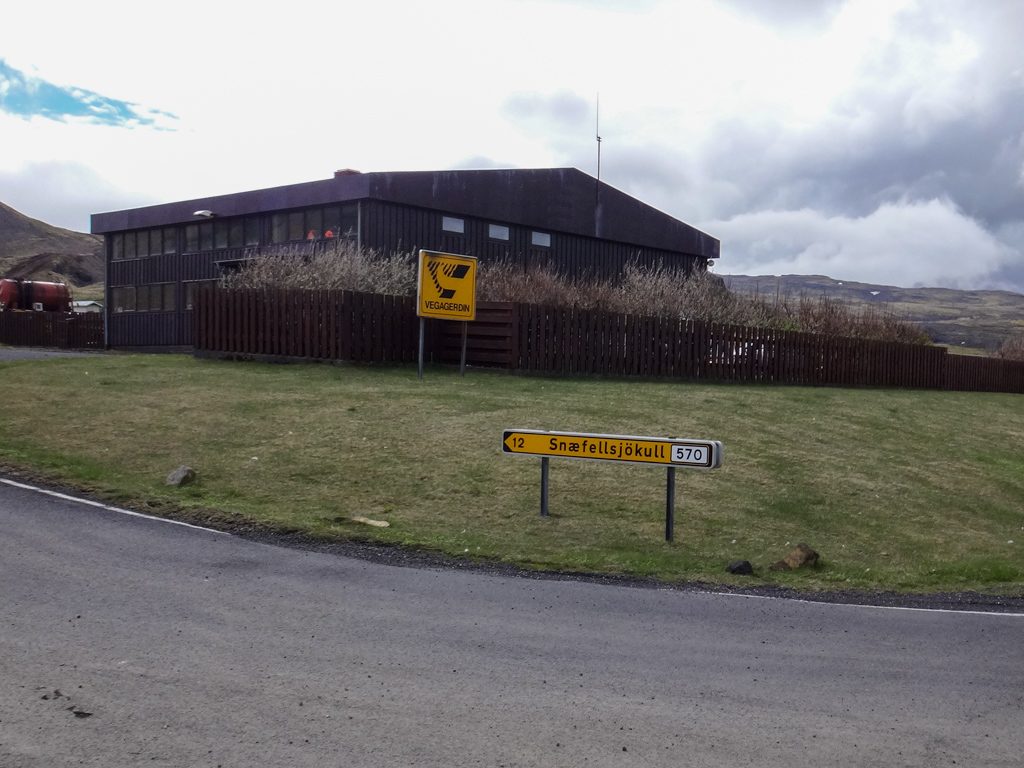 Snæfellsjökull is a strato-volcano, capped with a large glacier.  I wanted to see how close I could get on the bike. 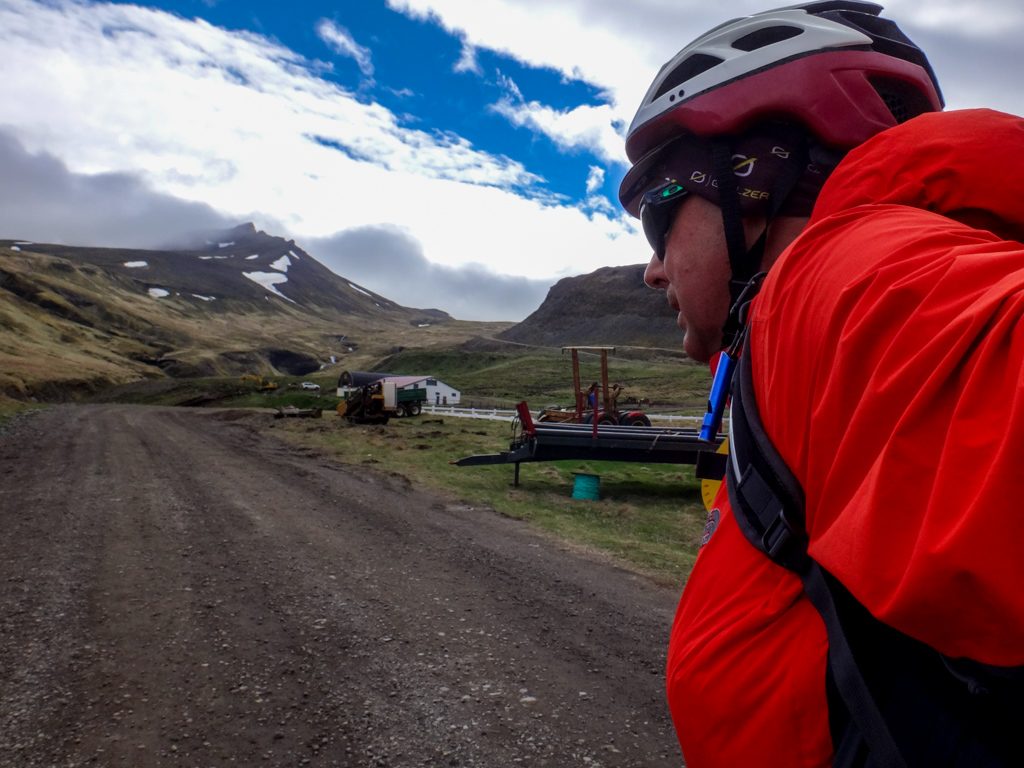 This involved a steep climb on a rough dirt road. 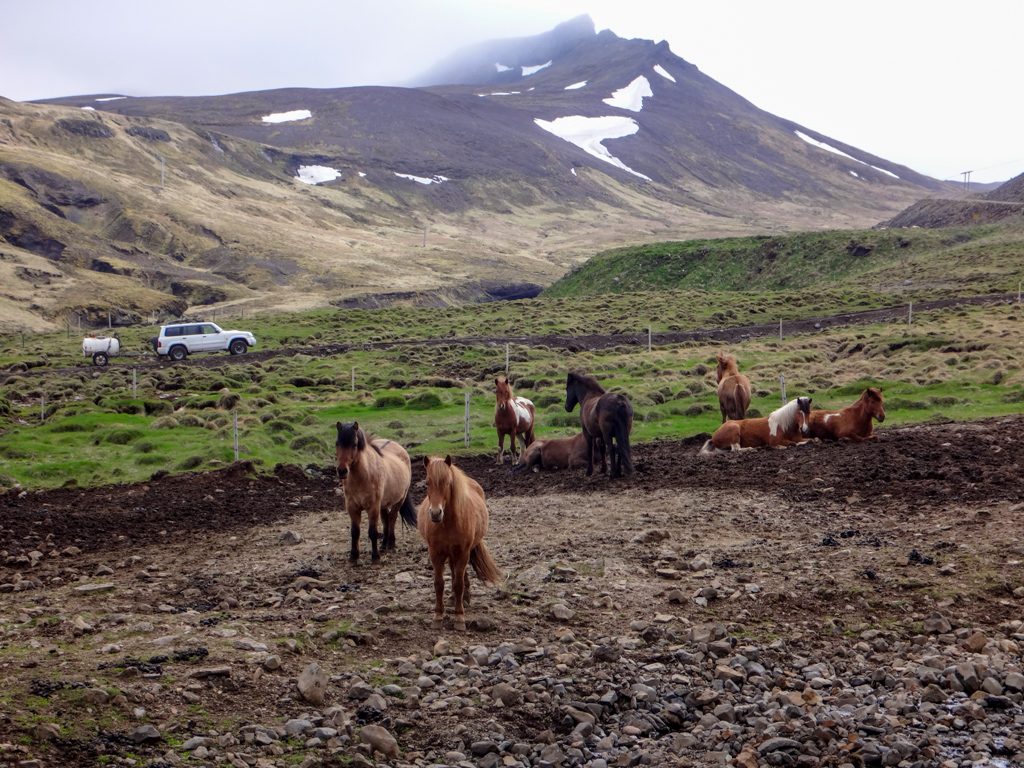 A bunch of Icelandic horses looked indifferently at this crazy tourist as I pedaled past their paddock. 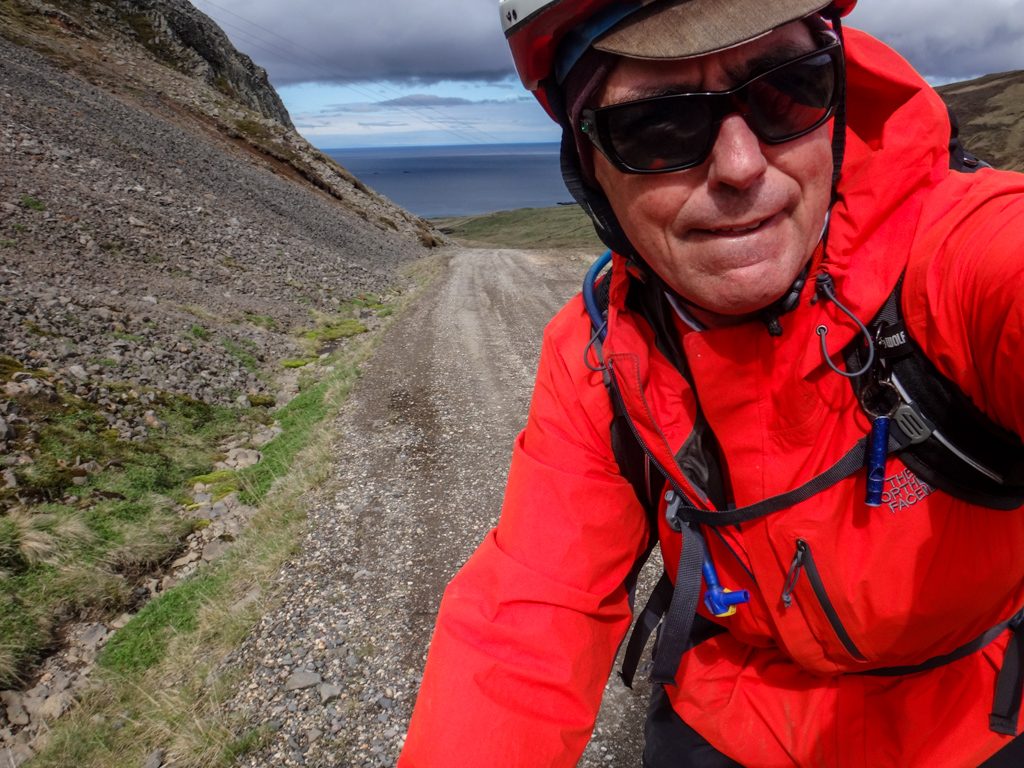 It was hard work.  A cold strong wind buffeted me from the side. 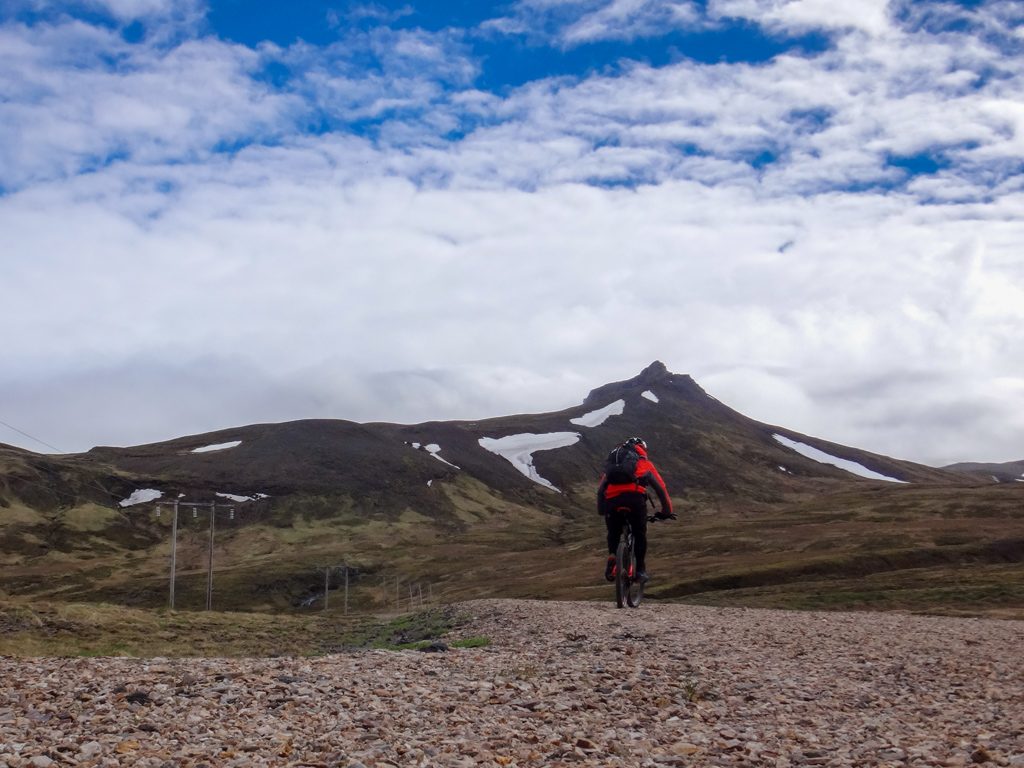 Clouds swirled behind some of the hills.  I couldn’t see the actual mountain.  It was too high, and the clouds were too thick.  I wasn’t sure how far I’d get, but like my other rides in Iceland, this was more about the journey than the destination. 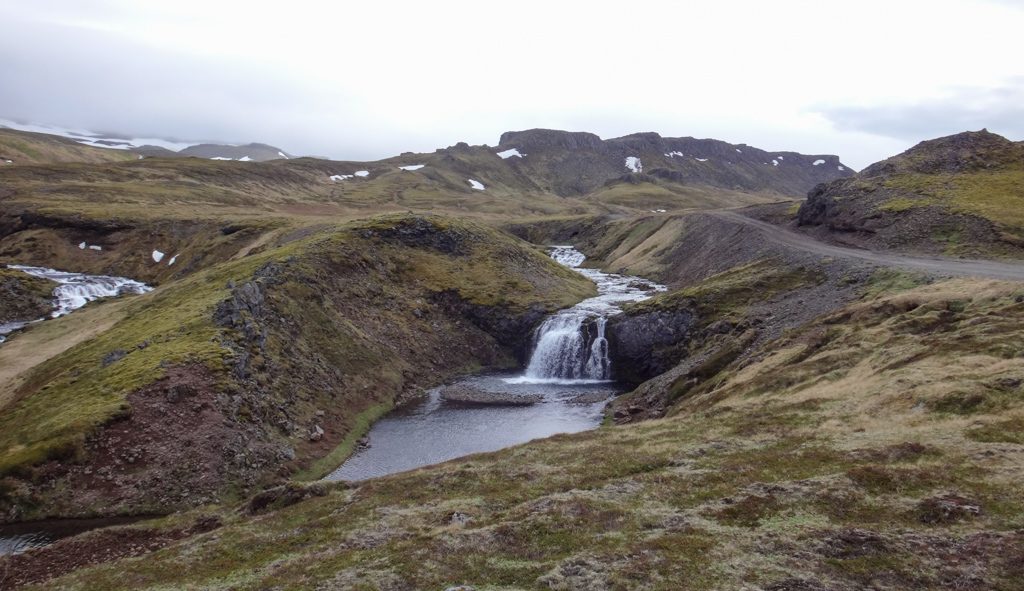 Melting snow fed a small stream which cascaded beside the road as I climbed.

Riding solo is frustrating, so I was excited to meet a couple of hikers coming down the hill. 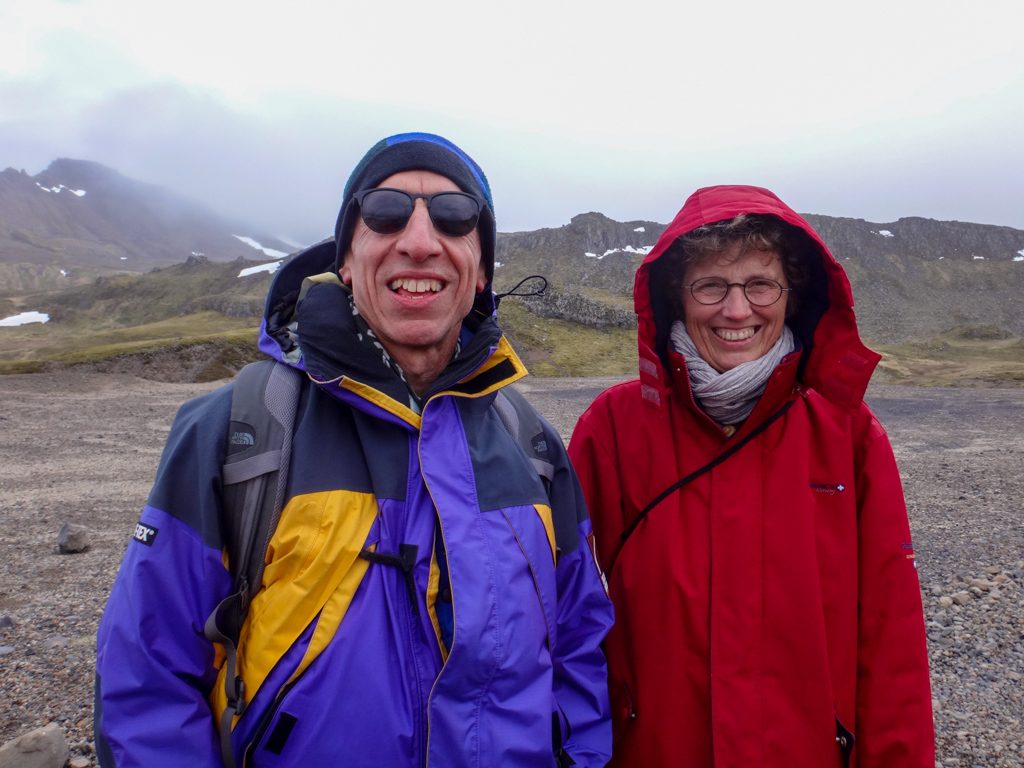 David and Barbara were visiting from the USA.

They warned me the road was closed a few kilometres ahead.

“Great!” I replied. I looked forward to checking out what it took to close a mountain road in this part of the world. 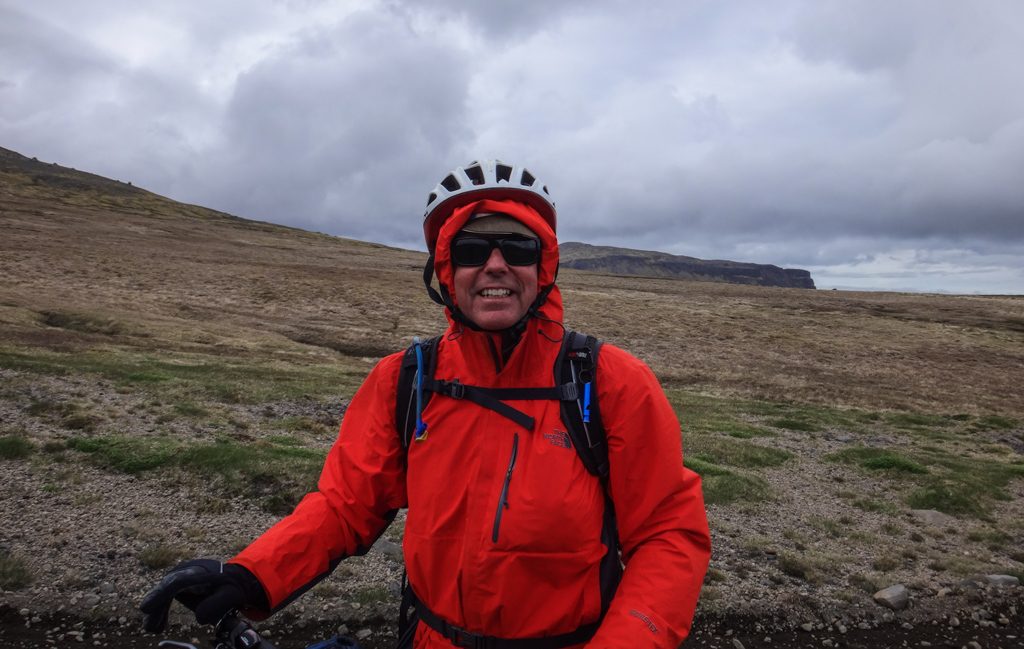 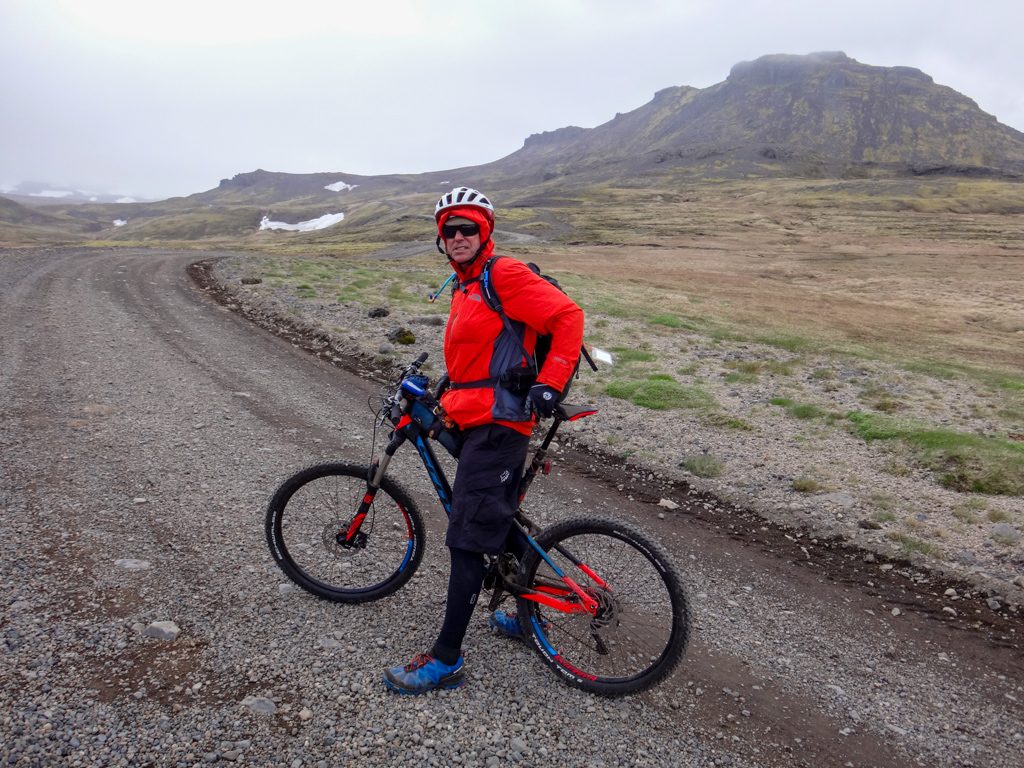 Barbara offered to take a few photos of me.  I was rugged up, but I felt cold. 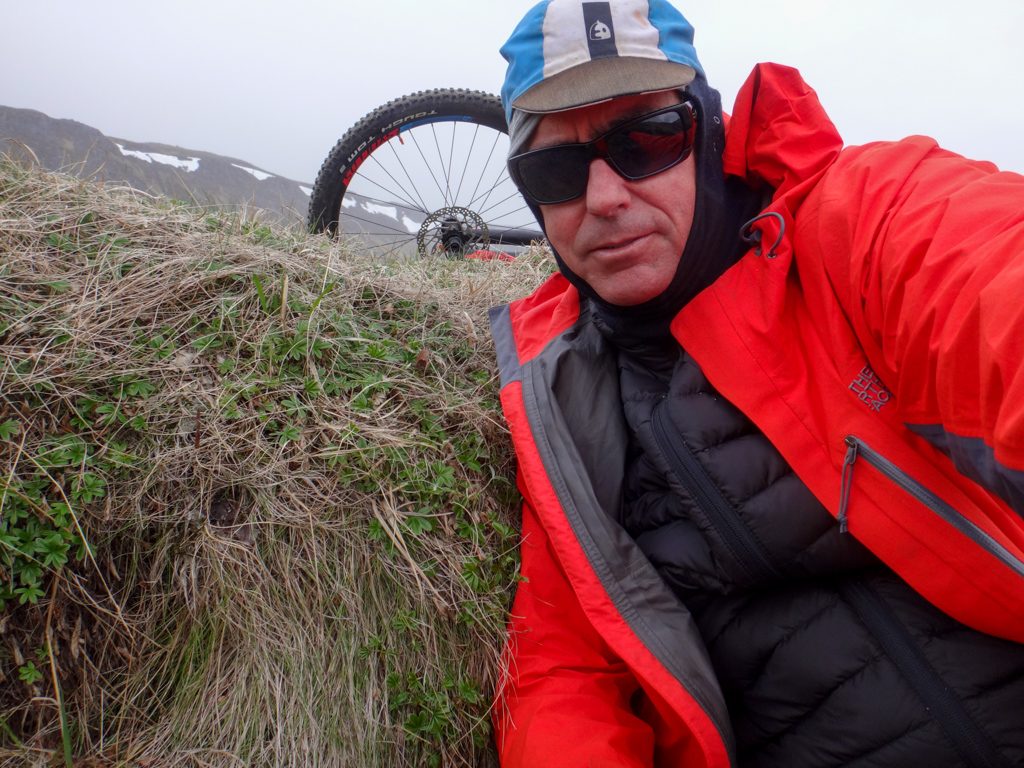 After riding a for few more minutes, I decided to have a rest in a ditch, out of the wind.  I munched on a chocolate bar, then put on a puffer jacket.

I had never worn so many layers while riding.  But despite the hard work, I wasn’t sweating.

I stood on a ridge and looked both ways.  This place was spectacular.  I felt overwhelmed with its beauty. 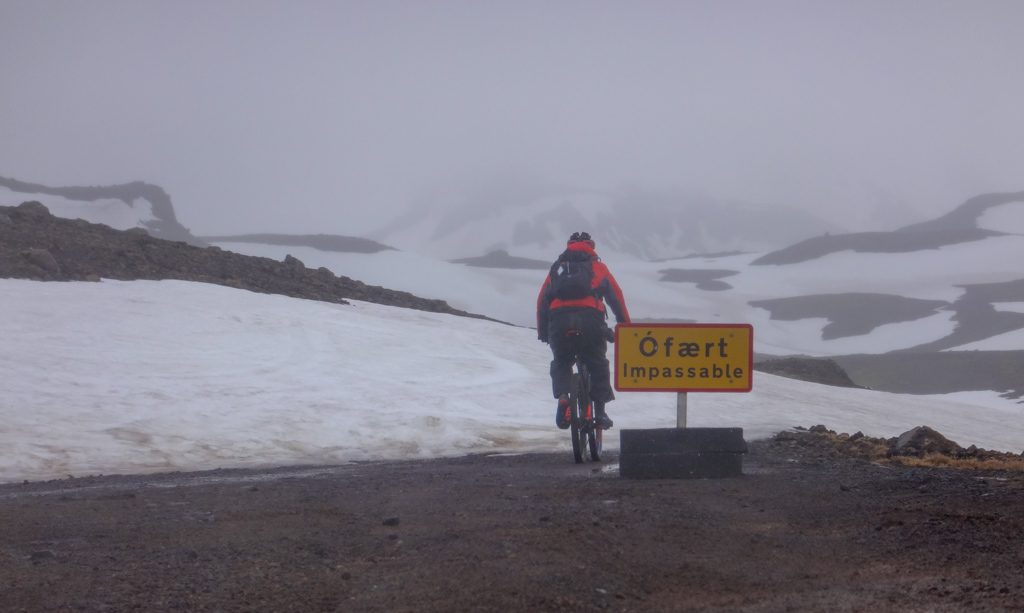 And then I came to the road closure.  Huge snow drifts covered the road.  There was no way I could go any further on my skinny tyres.

I saw the irony in the situation.  The road had come to an end, and so had my time in Iceland.

I felt grateful and sad at the same time.  A year ago I wouldn’t have even imagined that I’d have the chance to visit such an amazing place.  The time had flown.  I didn’t want to go.

Sometimes travel is a series of happy “hello’s” followed by sad “good bye’s”.  You can’t have one without the other.

Iceland is beautiful. If you’re looking for an unusual place to have an adventure, just go. You won’t regret it. 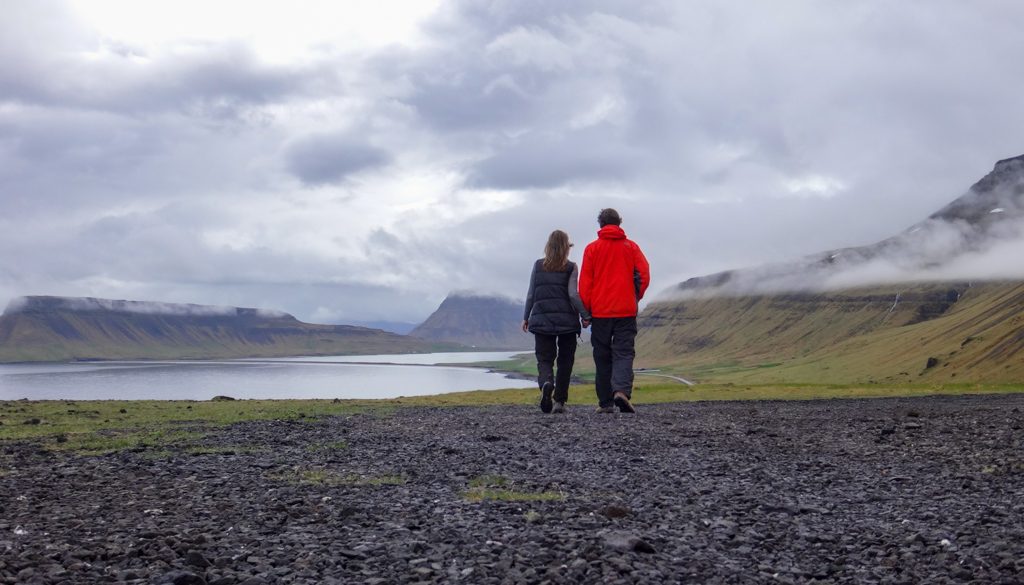