Skip to content
Dundalli was an Aboriginal leader and fighter from the Dalla people of the Blackall Ranges who was eventually adopted by the fearsome Djindubarri people of Bribie Island in the 1840’s.

He was convicted of the murder of Andrew Gregor and Mary Shannon in 1846. People much more qualified than I have described how the trial and conviction of Dundalli were unjust. I won’t regurgitate those arguments here, but if you’re interested, you might like to read some articles by Dr Libby Connors and Dr Dale Kerwin.

His execution was particularly gruesome. The hangman botched it while his distraught relatives looked on in horror from the hillside on what is now Wickham Terrace. The rope was too long, at the drop Dundalli actually landed on his coffin, and the hangman had to bend his legs and drag down on them to kill him.

This happened exactly 156 years ago today. So I decided to honour Dundalli by cycling into the city to the GPO and back (about 80km), stopping by “Yorks Hollow” – an important traditional camping ground for Aborigines prior to European settlement. Yorks Hollow used to cover most of what is Victoria Park Golf Course and the Exhibition Grounds. Today it’s little more than a small park beside the busy Inner City Bypass motorway. But it’s still a beautiful park – especially when you pause to think about what it was.

In her book, “Tom Petrie’s Reminiscences of Early Queensland”, Constance Campbell Petrie says of it:

Another big “tulan” or fight, Father remembers at
York’s Hollow (the Exhibition). He and his brother Walter
were standing looking on, when a fighting boomerang thrown
from the crowd circled round, and travelling in the direction
of the brothers, struck Walter Petrie on the cheek, causing
a deep flesh wound. The gins and blacks of the Brisbane
tribe commenced to cry about this, and said that the weapon
had come from the Bribie blacks’ side, and that they were
no good, but wild fellows. The brothers went home, and the
cut was sewn up. It did not take long to heal afterwards.

At that fight there must have been about eight hundred
blacks gathered from all parts, and there were about twenty
wounded. One very fine blackfellow lost his life. His
name was “Tunbur” (maggot). In the fight he got hit
on the ankle with a waddie, and next day died from lockjaw.
They carried the remains, and crossed the creek where the
Enoggera railway bridge is now, and further on made a fire
and skiimed the body and ate it. My father knew ” Tunbur”
well; he was one of the blacks who accompanied grandfather
Petrie on his trip in search of a sample of ” bon-yi ” wood. I was pleasantly surprised to find out someone else had the same idea and had erected some signs about Dundalli in Post Office Square across the road from the GPO. The GPO was actually built in 1871 on the site of the old Female Convict Factory. What struck me today was the irony. Here was a war memorial on the front wall of GPO comemorating soldiers who had died for their country in the First World War, yet it was the same place a black man was killed for trying to protect his country and uphold his people’s laws. Even the grand statue of Major General Sir William Glasgow appeared to look away in shame from the GPO and the memorial posters there. The trouble is we often become emotionally immune to irony, even though it can sometimes highlight painful truths. I’m glad I did what the sign said, and walked in his tracks. Cycling to the top

The Sir Leo Hielscher Bridges span the mouth of the Brisbane River.

Climbing to almost 80 metres above the water, they allow huge volumes of traffic to flow from one side of the river to ther other.

A bike path on this new bridge was officially opened today, which for the first time, allows pedestrians and cyclists to stand at the top of this magnificent gateway to the city and enjoy some breathtaking views out to the bay and back to the city – views you can’t really get in a car as you’re not allowed to stop at the top.

There are only two flies in the ointment which I’m sure will be fixed soon. The first is a 10km/h speed limit on cyclists using the bike way. The problem is that many cyclists have difficulty keeping a bicycle stable at speeds under 10 km/h, so in some ways it’s dangerous having this limit so low.

The second problem is connectivity. There don’t appear to be any connecting cycle paths at either end of the bridge so you need to bravely battle five to ten km of busy roads to get from one cycleway to the bridge.

But riding to the top of this bridge (twice) was a lot of fun for me. And I was impressed to see the importance that the state government has placed on putting infrastructure like this in place for cyclists.

I hope they build more! We drove out to the Boondall Entertainment Centre today so Liz and Lilly could see “Disney on Ice”.

Harrison and I took advantage of the trip, brought our bikes and explored the Boondall Wetlands while Liz and Lilly saw the show. It ended up being a real family affair because Lachlan phoned us and asked if he could join us.

Harrison and I were having so much fun that we asked Liz if she could drive home, and we’d ride back.

As you can see from the photos, it was a glorious day. Another great afternoon bike ride through the Boondal Wetlands with Liz and the kids. 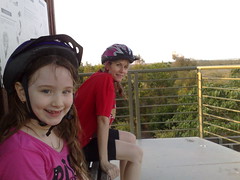 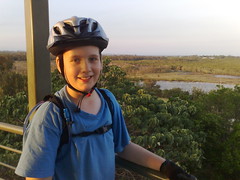 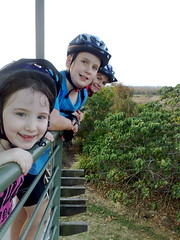 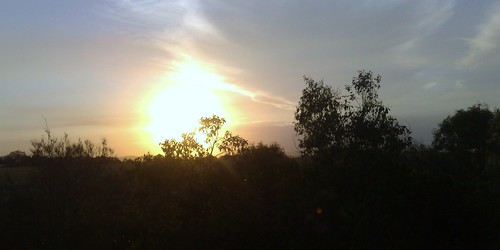 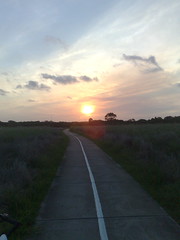 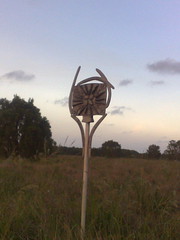 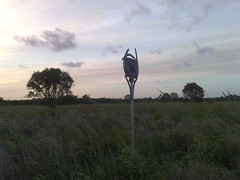 We spent an hour around sunset yesterday riding through the Boondall Wetlands along the Moreton Bay Bikeway.

No cars, lots of open space, and great views. What more could you want?

The Bikeway goes for miles, and for a lot of it, you can’t hear anything except wind!

I was impressed by this Aboriginal sculpture in the middle of nowhere. It’s framed by boomerangs and has a plant motif on one side, and a bird on the other.

These wetlands were used by Aborigines as pathways from the hinterland down to the sea. 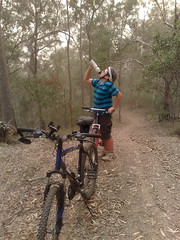 Riding up a Storm

The sky was light brown, and after a few minutes riding, my mouth tasted like dirt (yes, I’m very familiar with the taste of dirt).

But but that didn’t stop us zipping down dirt trails on the bikes!


I went over the handlebars three times today. 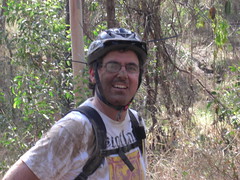 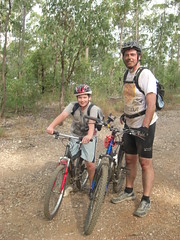 Harrison and Neil
after Crash #2 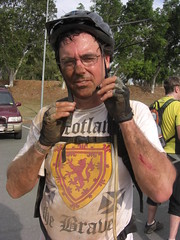 Thankfully I was with Simon & Sam, Steve G, Steve B and Harrison, so there were plenty of people to look out for me (and laugh).

We paid a visit to Bunyaville State Forest at Albany Creek to try our skills on the mountain bike trails there.  They’re amazing.  Miles and miles of dirt tracks with wierd names like “Nut Cracker”, “Psycho”, “Jurassic”, “Carnage”.

I thought to myself “Why do they have such strange names?” 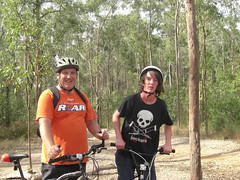 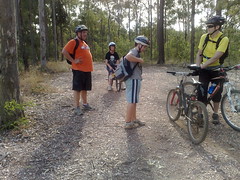 The first time over the handlebars, I used the front brakes too much.

The second time over the handlebars, I think I didn’t learn my lesson well enough from the first time, and used the front brakes too much.

The third time I couldn’t get up.  Some sadist had put a hidden pothole in the track, and my front wheel found it as accurately as a guided missile.  My helmet hit the ground with a horrible thud, and I saw stars.  I’m really glad Steve G was able to haul me up on my feet.

Now every inch of my body hurts.

Everyone (except me) rode really well and safely. I was really proud of Harrison too. For a nine year old he did really well on a tough ride. And Sam did amazingly well too considering he was on a BMX not a mountain bike.

And, unless I die first, I’ll be out again tomorrow morning trying my skills against another (easier) trail.

Thanks to Simon and Steve B for the photos, and thanks to Steve G for the map data.

We had a wonderful day at Southbank Parklands yesterday.

After checking out the “Machines of Da Vinci” exhibition, we headed down to Chez Laila to enjoy some fantastic Lebanese food, and thick, muddy Lebanese coffee. I thought I might have seen a young Ozzy Osborne there.

Then we hopped on the huge Ferris Wheel, the “Wheel of Brisbane” as the sun was going down. The view was spectacular, and we all agreed that Brissie is a much prettier city than we give her credit for.

Afterwards we went to the free comedy concert at the Piazza and watched The Kransky Sisters, Tripod plus a host of other comedians debating whether or not Queenslanders have more cause than other Australians to be happy. (Of course we do!)

Incidentally, the Kranskys are hilarious. Check out their website if you haven’t heard of them. Tripod are so funny you forget how talented they are as musicians.

All in all, a fantastic day! I hope we have many more days like this.