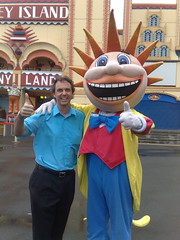 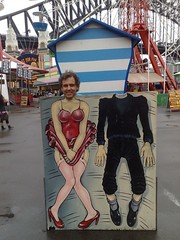 I had a great time in Sydney today at a client’s Christmas Party.

We had lunch at Luna Park, so I took a few minutes out to take a few photos of this fun place.

The smiley clown looking guy had a girl with him. I told her I was really Seven years old and just looked old, and would she take my picture please.

As you can see she obliged!

Here’s some slideshows and videos of our recent trip on Dawn Princess.

The thing I enjoyed most about it was being able to share it with Jonathan, see him experience the magic of his first cruise.

Thanks for being a great travel companion, Jonno!

Here’s a video of our cabin, the view from our window, and the deck outside. Lots of Englash Flags flying everywhere, but it’s nice to see a few Aussie ones on board too, even though she’s an english ship. 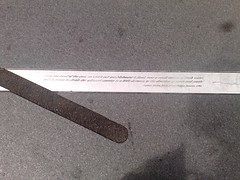 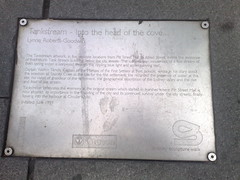 One of the reasons the first fleet decided to set up camp in Sydney Cove was because of the fresh water.

A small stream called “The Tank Stream” flowed into the harbour near where they landed.

Today it’s covered over by roads, railway lines, wharves and 200 years of other city “stuff”.

But if you look closley on the pavement at the top of Pitt Street near Circular Quay, you can see this marker which shows where the stream flows.

And if you’re lucky enough, you can be one of the few tourists who gets to do an underground tour of what’s left of the stream.

Look up “Tank Stream” on wikipedia of you’re interested.

It’s amazing what history lies under our feet, waiting to be rediscovered.

A view of our ship, and Sydney Harbour from Circular Quay.

Sorry about some of the camera movement – I’ll do a better job next video. Promise!

I’ll try an upload a video of our room and the view from our window later on this afternoon.