I cycled through the Blue Tiers in North Eastern Tasmania today. The day started beautifully at the small town of Weldborough, but the weather quickly deteriorated and I ended up doing most of the 35km in cold rain.  I’ve never ridden in such cold conditions (3 – 4 C) before, and it was satisfying to know I could do a tough ride in such difficult conditions.

The route was east out of Weldborough, up the mountain, then down a dirt road to Lottah, up to the Blue Tier camping ground at Poimena, and then down the “Descent” trail back into Weldborough. As I rode into Lottah, it was pouring with rain and freezing, so I waited a while at this little caravan and shelter. No one was there, and the door was unlocked. I went in, and there was a guest book on the table, so I signed it.

What a welcome sight to a cold, wet traveler! I celebrated by eating Snickers bar. I was amazed at how quickly the chocolate and nuts warmed me up. Which way to go? I had a pretty basic map and I tried to follow all the signs. Even so, there were still a few times I thought I had gone the wrong way.

I got sick of battling to climb all the rock gardens on foot, so I stopped and did a quick video 🙂 This is where I started and ended my ride. I was so glad to arrive there 90 minutes late at the end of the ride.

It was built in the 1880’s and is pretty spartan inside. So I had a Ham Pot Roast and a cup of tea as I sat by the warm fireplace.

That meal was better than any I have had at a fancy restaurant. It warmed me to my core.

All up, it was a total ascent of about 1,000m. The climb up was steep and I worked hard, but it was much more difficult coming down the mountain. There were some very rocky descents, and quite a few freezing flooded creeks that I had to cross.

I’d say this was the hardest ride I’ve done todate because I did it alone, so I had to be extra careful, and because of the unfamiliar conditions – very cold and very tricky downhills.

Because my phone conked out I don’t have a complete log, so I’m basing the profile and map on the manual route I worked out before the ride. I actually rode an extra 5km in the middle of the ride at Poimena because I made a mistake and got onto the descent trail the “long” way instead of the short way.

I plan to ride a mountain bike through the Blue Tiers in Tasmania this Sunday. It’s a picturesque, remote alpine area of north-eastern Tasmania that is supposed to be well worth the effort.

The only problem is that I’ll probably be riding it alone, and I’ve never been there before.

So to be on the safe side, I’m publishing my proposed route here, with some checkpoints along the way, and I’ll update my twitter feed with a photo from those checkpoints so that (if you’re interested) you can keep an eye on where I’m up to. If I fall off the bike, or get abducted by aliens, at least you’ll know how far I got and where I plan to go.

I’ll be leaving the Weldborough Hotel at about 10.30am and aim to be back by about 3pm.

I’m really looking forward to it, and hope to share some great photos.

I’ll be working in Launceston for the next week, so I thought I’d come down a day and a bit earlier and explore the place by mountain bike.

I hired a basic hardtail bike from a local shop, donned my cold weather gear, and took off into the hills on this beautiful cloudless late autumn day.

The first part of the trip was up to Trevallyn Reserve which is perched atop some of the hills to the west of town.

The reserve has some pretty steep and rocky trails which were hard work to negotiate, but worth the effort. The view down the river towards the dam is spectacular.

After a quick break, I then headed to the Kate Reed reserve to the south of town. This has a lot more narrow single track than Trevallyn, and it was here I suffered a pretty nasty “Gumby Stack” where I fell off my bike for no reason other than I couldn’t pull my feet out of my clip-in pedals. Luckily my shoulder survived the fall and I have no broken bones.

I’ve never ridden in such cold weather before. It takes a lot more preparation than I’m used to. And you still get hot, and cold, and wet with perspiration.

But it’s a great way to explore a city. I’ll definitely try this again! 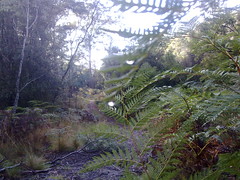 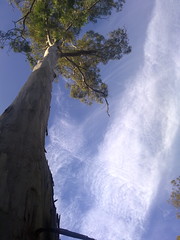 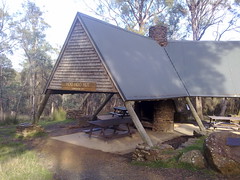 Legend has it that Sir Richard Branson once owned these cows.

Vandals stole the horns from one of the cows, and the legs from another one, but they still remain an excellent example of art in public spaces.

These cows have “lived” in this field close to the centre of Launceston, Tasmania for over a year, and (I think) look fantastic.

Someone told me that one morning, the people of Launceston awoke to find the cows had been moved to the middle of the local highway, aparently directing traffic.

Like the crazy bloke in the video says…. “Moo!”. 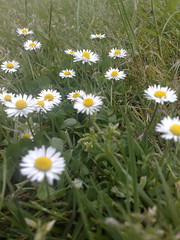 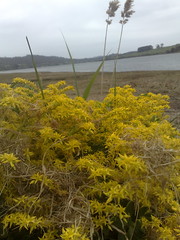 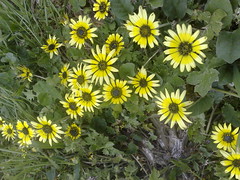 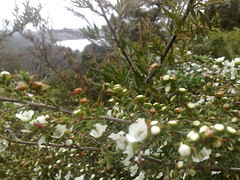 Spring has sprung in Tassie.

I’m here doing some work for a client, and thought it would be good to share some pictures I took with my mobile phone of some of the flowers that are blooming all over the place at the moment.

These flowers were taken near Rosevears, on the west side of the Tamar River, about 15km north of Launceston.

We don’t really get spring in Queensland. It’s about 3 weeks of winter and that’s it.

It’s lovely to experience what seasons are really like for the rest of the world. 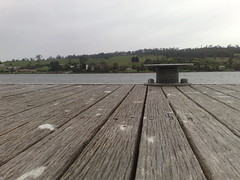 Sunset at Rosevears on the Tamar river
Posted by: neilius.

A tranquil place about 15 minutes drive from Launceston Tasmania. Taken with my mobile phone.

The Tamar River meanders from George Town on the northern coast of Tasmania down to Launceston, 55km away.

If you sailed it, you’d probably measure about 75km because of all the bends in the river.

Despite this meandering, it is quite deep and navigable for its entire length. Large ships regularly make the journey.

The spectacular Batman Bridge crosses the Tamar near Exeter, about 30 km north of Launceston.

Built in 1968, it is unusual in that it is a hybrid bridge (the technical term is “asymmetric cable-stayed”).

One side boasts one huge “A” shaped pylon that is secured deep into the bedrock on the western side of the river. Cables from it support the weight of most of the bridge.

The eastern side of the Tamar is not as rocky as the other side, so this end of the bridge rests on a series of trusses.

This particular part of the river is known as “Whirlpool Reach”. It is much narrower, and the currents can be very strong.