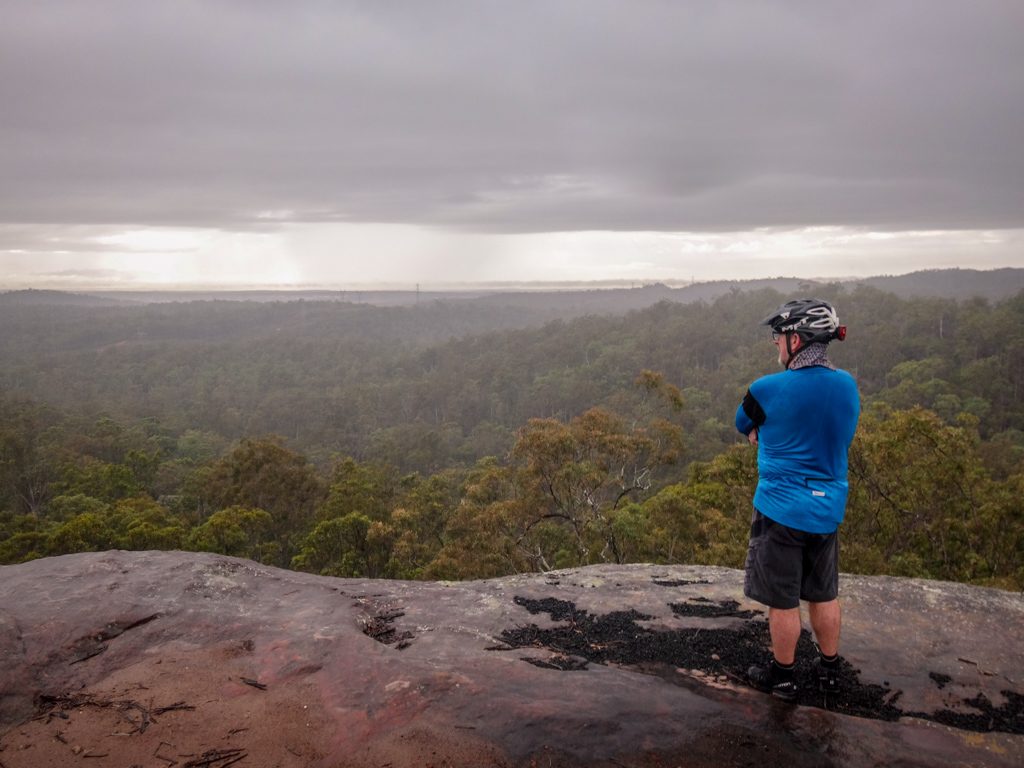 Today’s adventure took us on a large challenging loop through the hilly bushland and rocky outcrops of White Rock and Spring Mountain Conservation Parks near Ipswich. 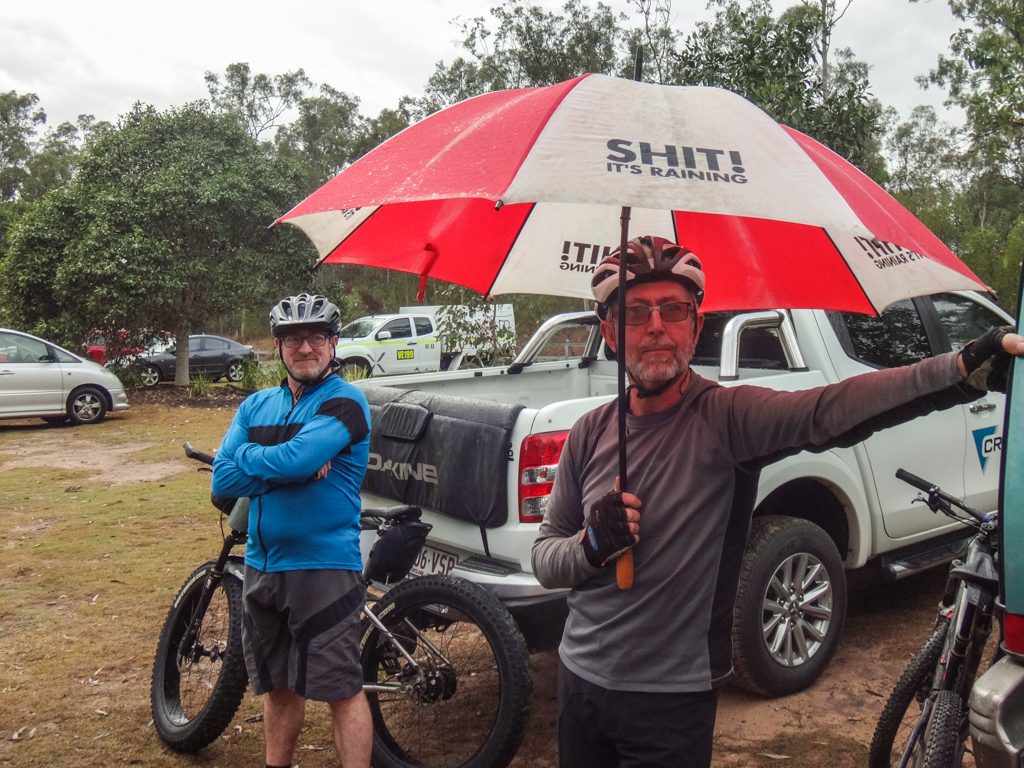 Light drizzle fell on dry, dusty soil while we waited for everyone to arrive at the car park.

September is usually dry.  Any rain this time of year is always welcome. 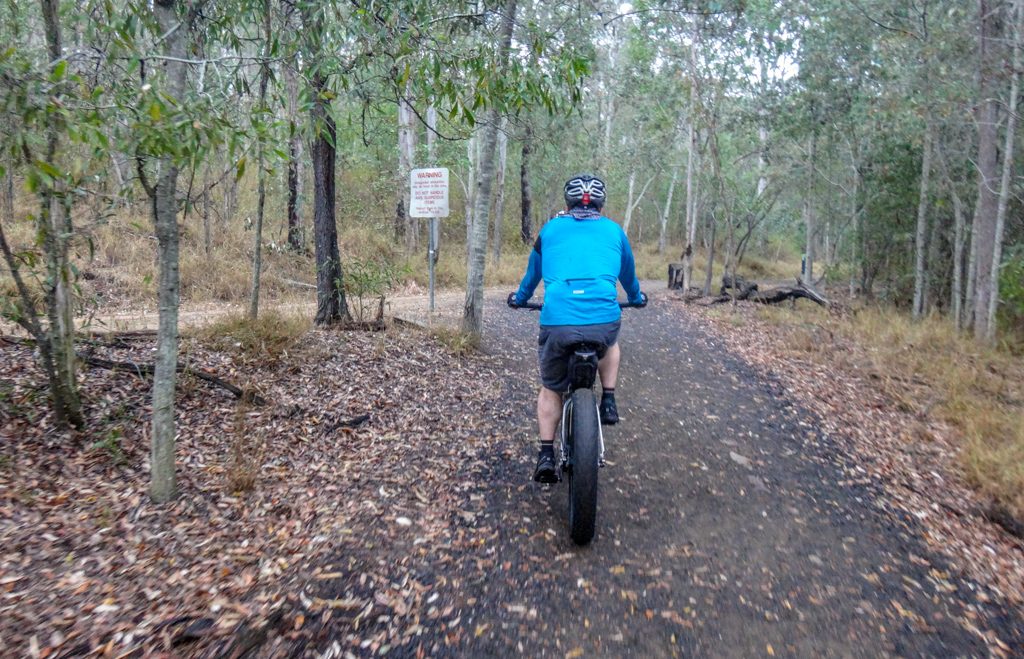 We followed Six Mile Creek out of the car park, towards “White Rock” – the large sandstone outcrop after which this park is named. 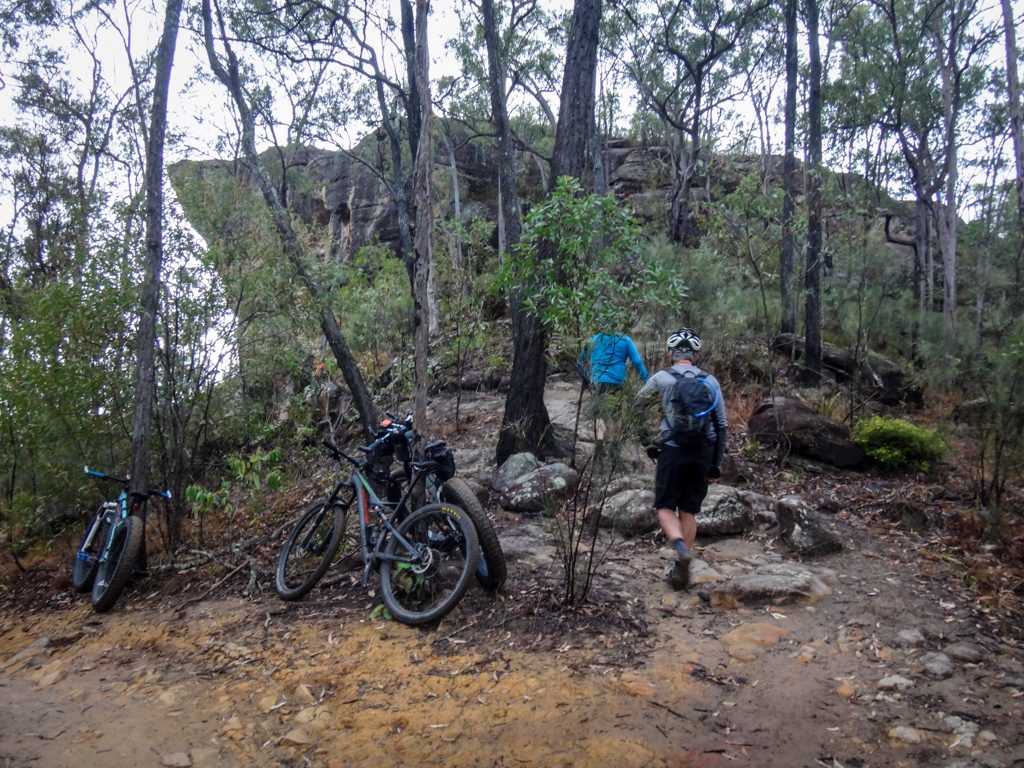 At the base of the rock, we parked the bike and walked the rest of the way. 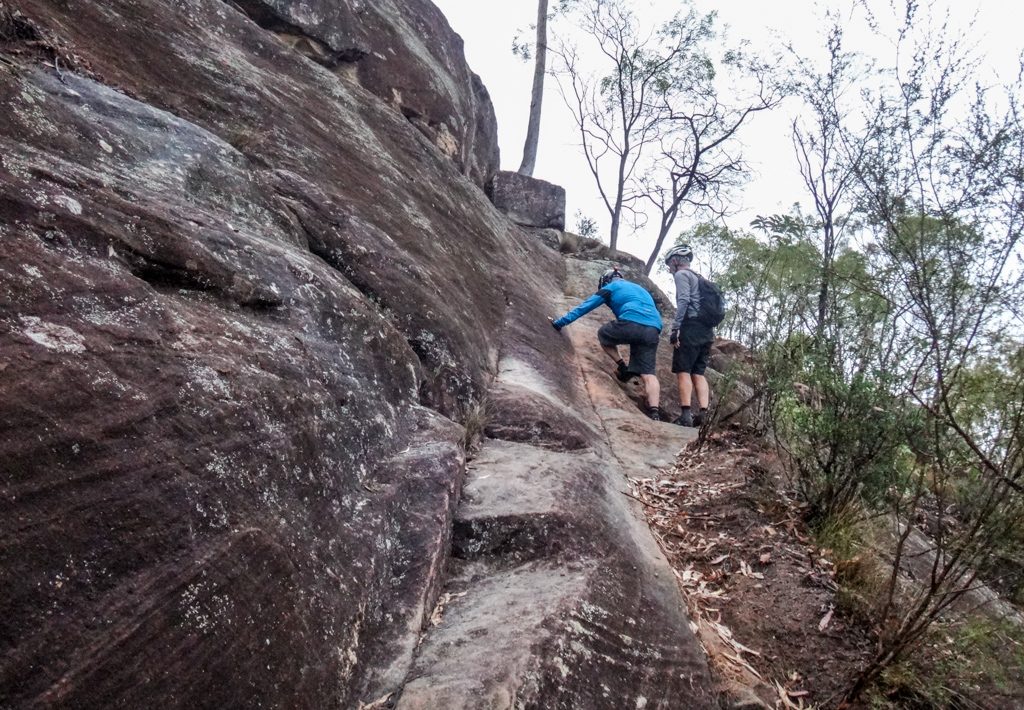 Darb and Eric climbed quickly to the top.

Calum his cycling shoes weren’t safe of the wet rocks, and waited at the bottom.

I was indecisive, slowly dragging myself upwards on hands and knees, scared of sliding off. 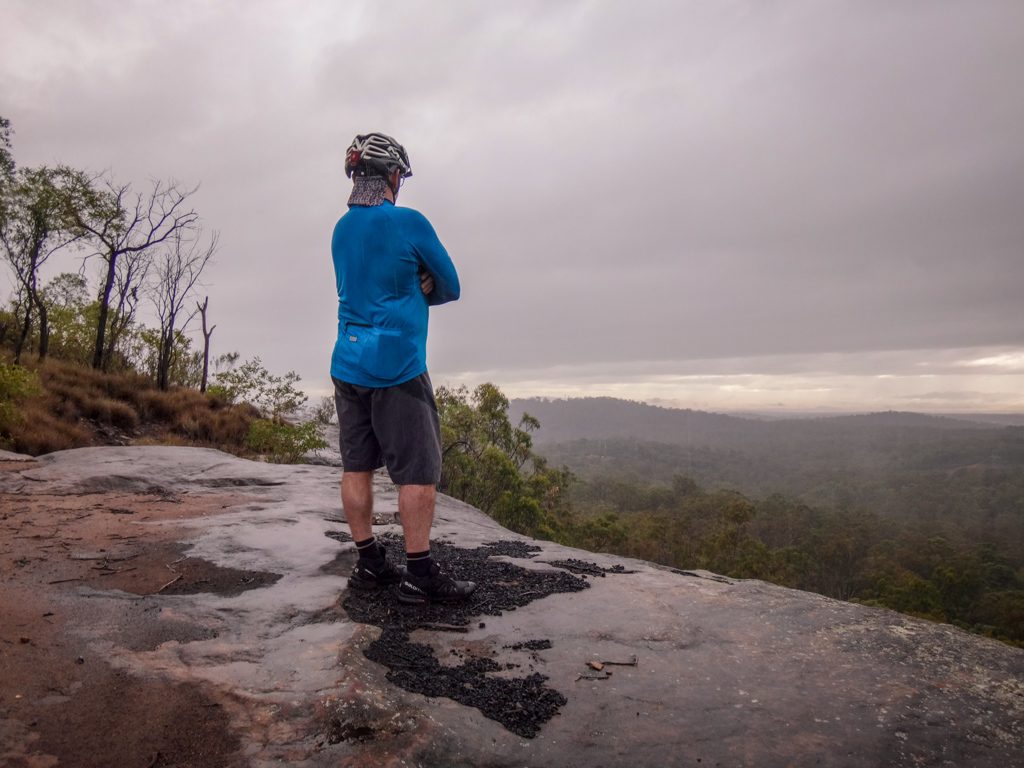 It was a tricky climb in cycling gear, but our efforts were rewarded with impressive views.

I could have sat up here for hours.

Eric and Darb completed the downward trip as quickly as the had climbed up.

I slid down on my backside, muttering to myself “Don’t fall.  Don’t slide off.” 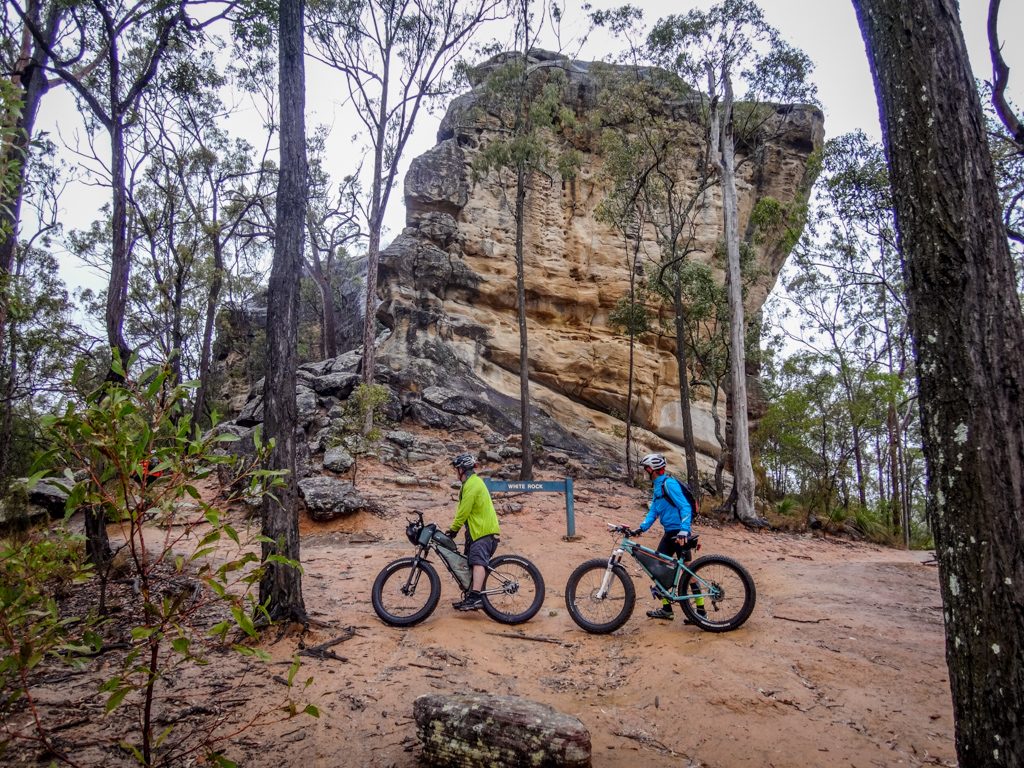 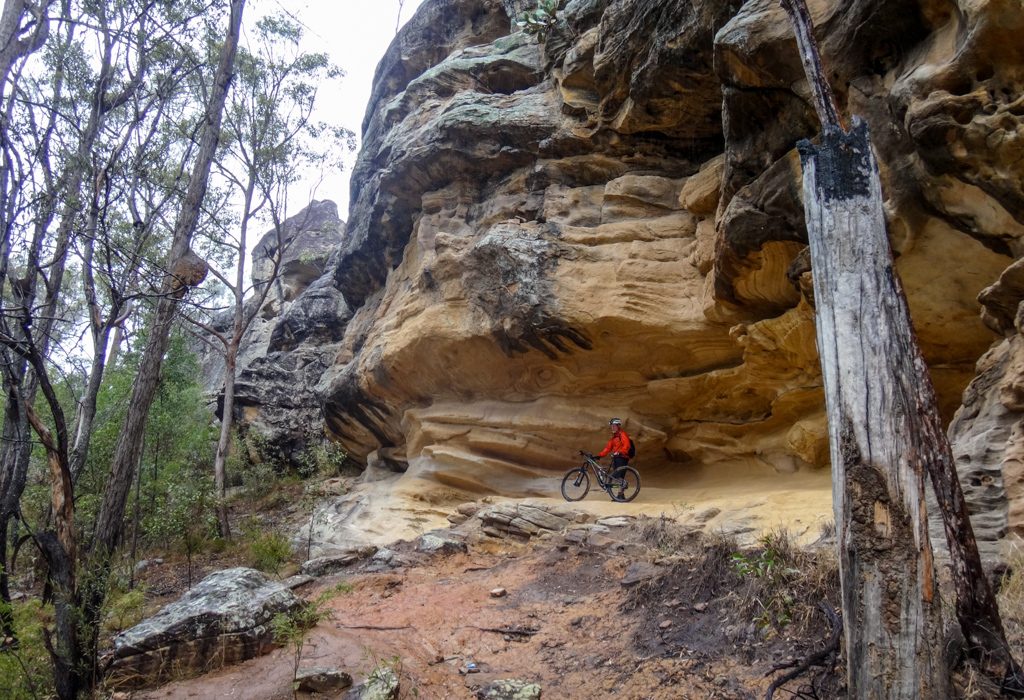 We pushed the bikes around the base of the rock, admiring its imposing structure. 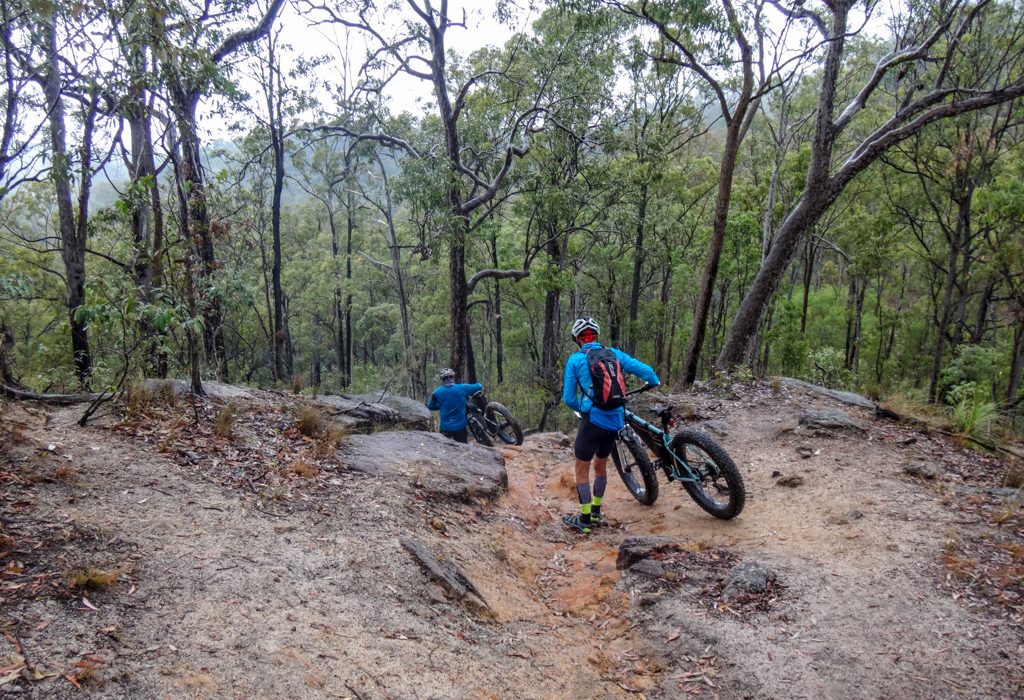 To get back to the main trail, we had to scramble down one of the steep tracks near the base of the rock. 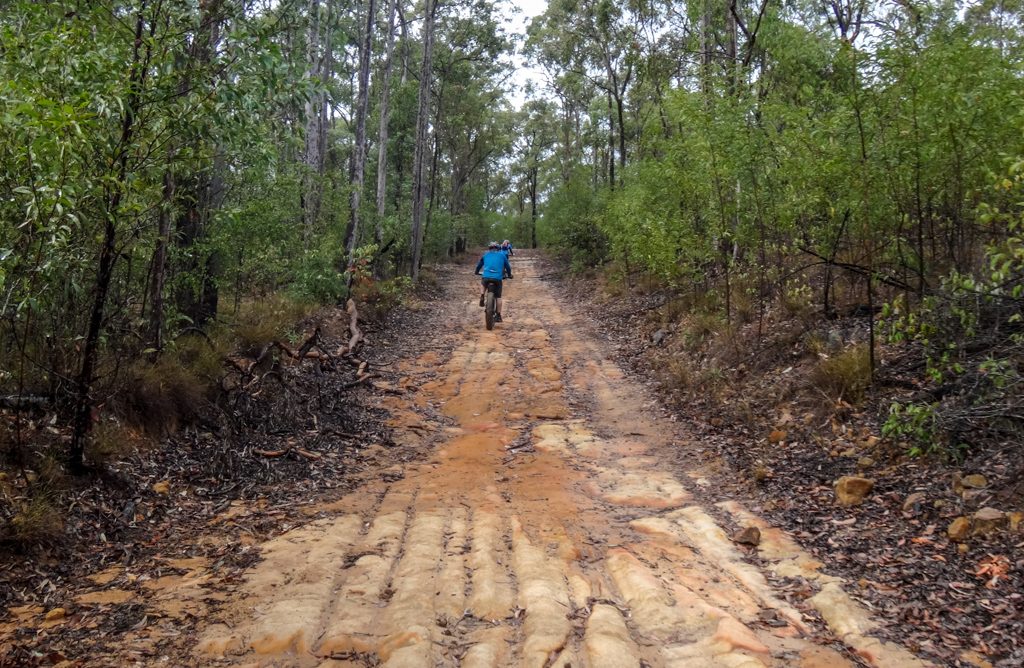 The Yaddamun Trail is a nine kilometre undulating track which links White Rock and Spring Mountain.

We followed it towards Spring Mountain. 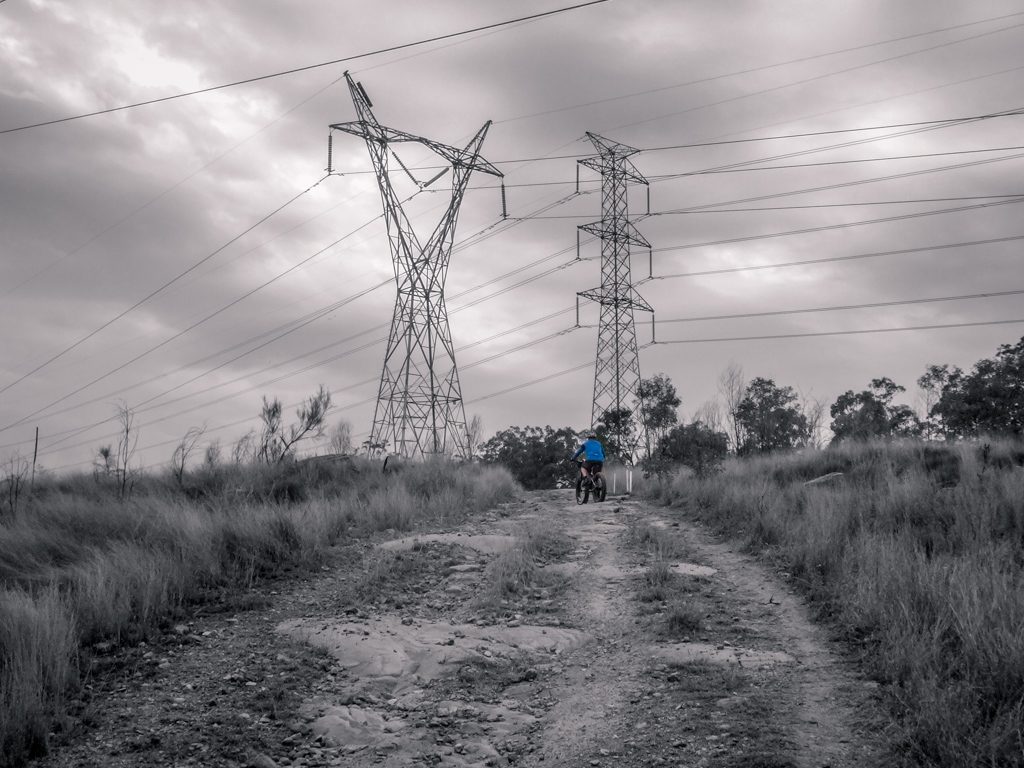 As we pedaled up and down the hills I was grateful for the cloudy skies and cool rainy weather.

This would be a hot thirsty ride in summer. 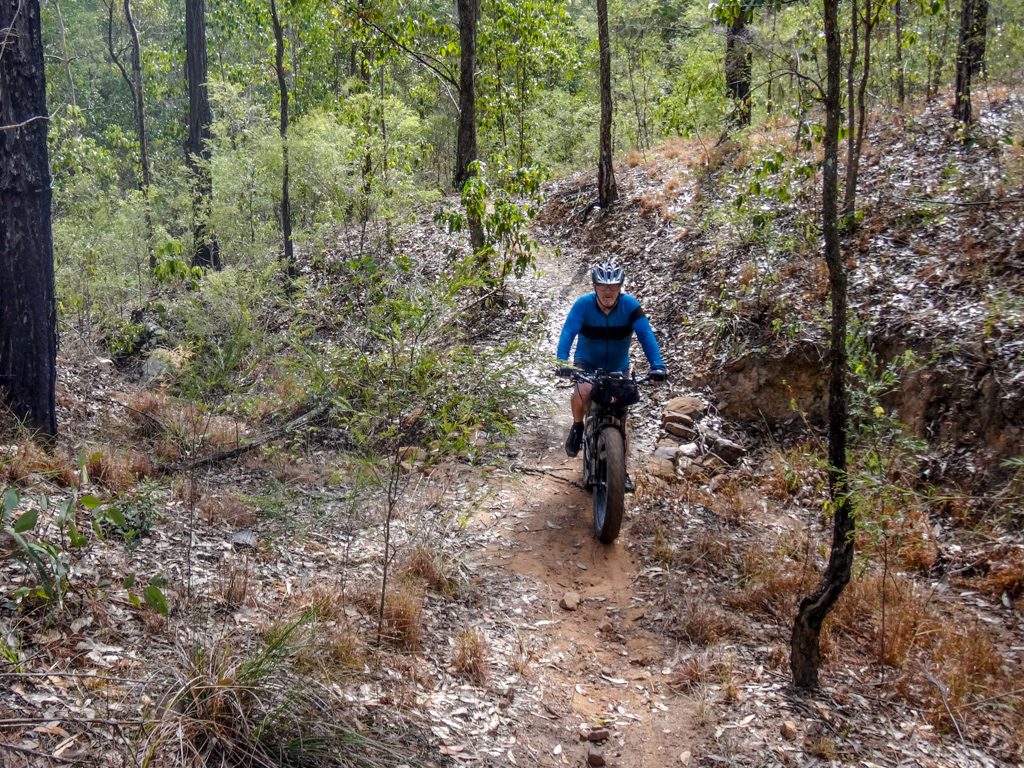 After one final hike-a-bike trail at Spring Mountain we rolled into a long network of single tracks. 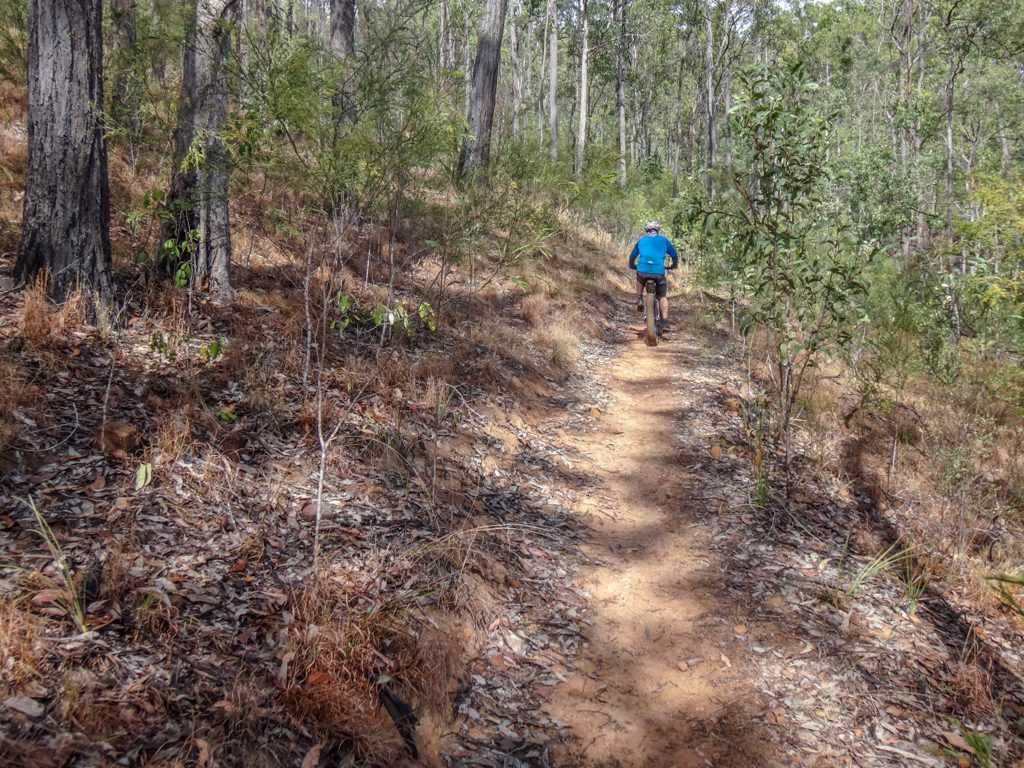 Starting with the “Monarch Track” this snaking narrow trail continued for almost ten kilometres, lazily following the contours around the hills. 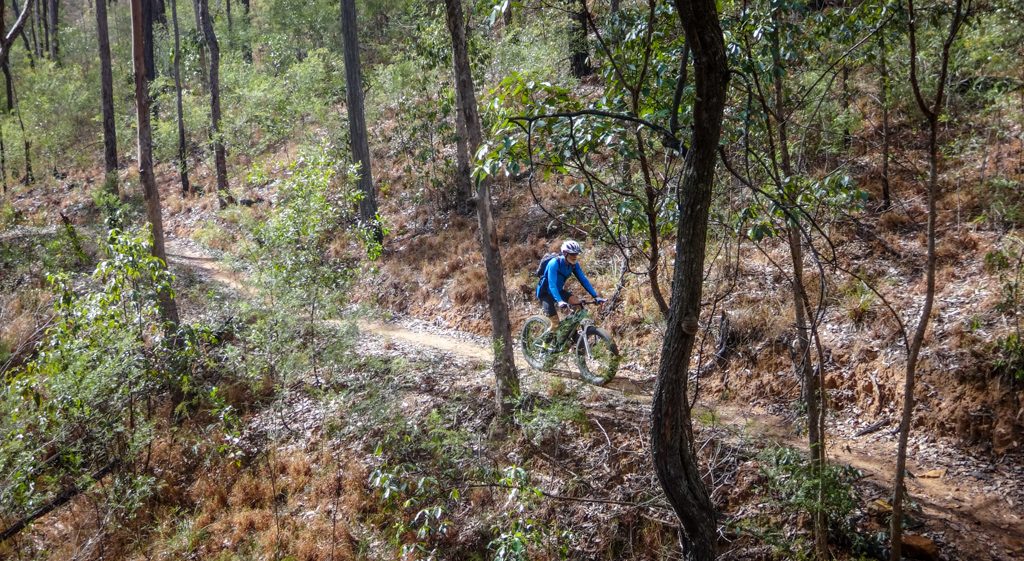 After the ups and downs of Yaddamun it was a relief to roll with the gravity gods rather than having to struggle against them. 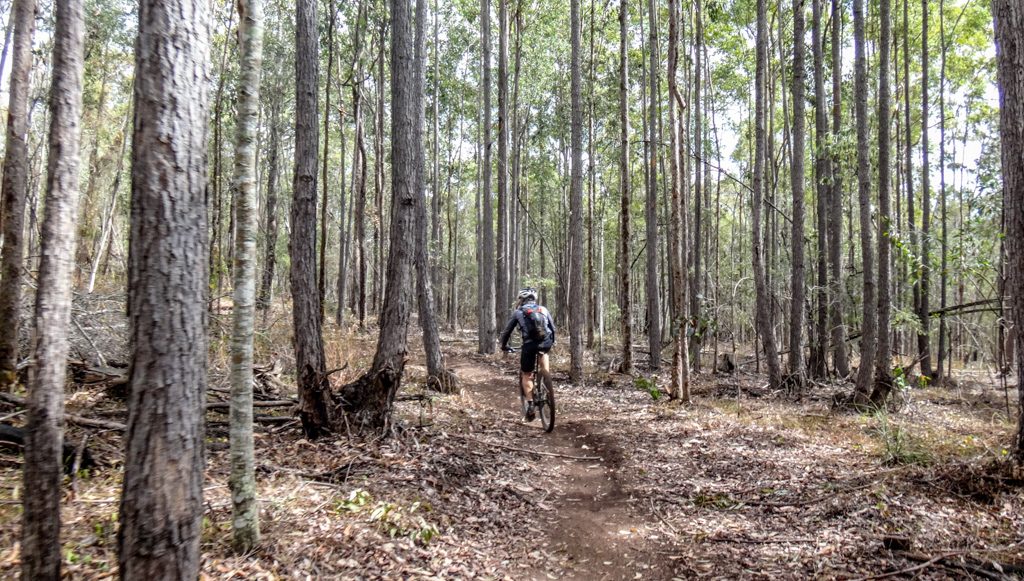 “Monarch Trail” led into “Horseshoe Loop” which led us to “Pinto Path”. 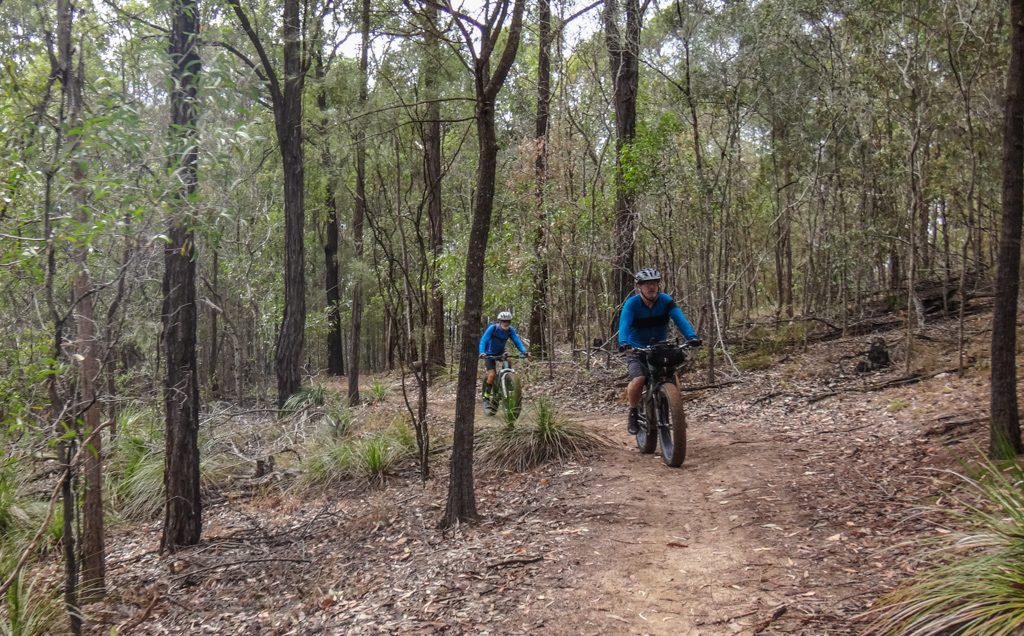 The single tracks continued for about ten kilometres, eventually bringing us back to the start of “Monarch Trail”. 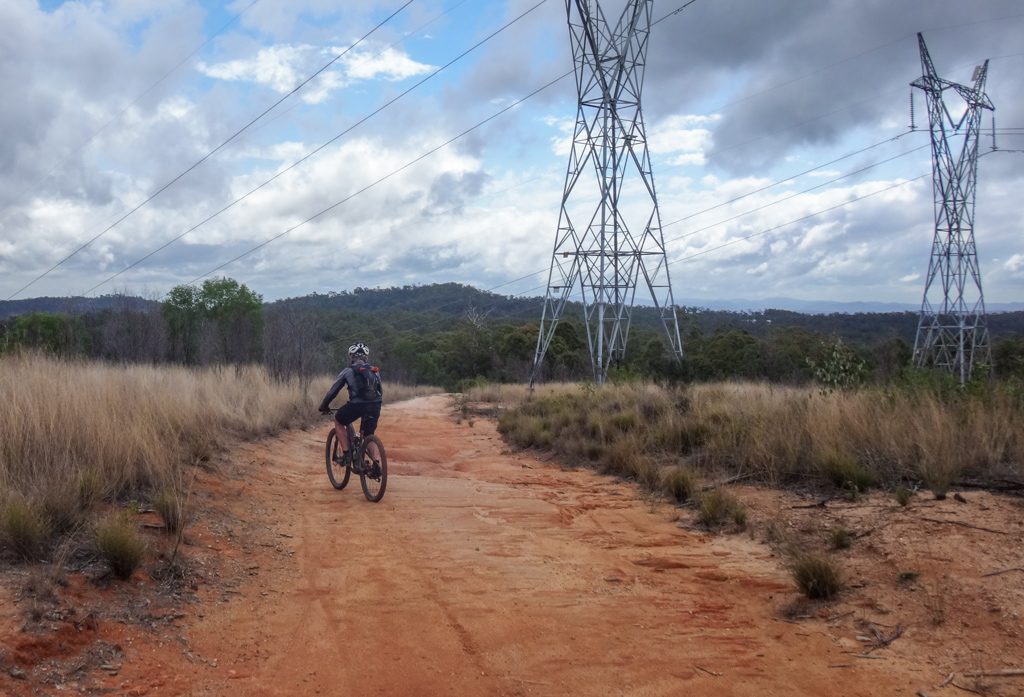 I had plans to explore more of Spring Mountain, but our legs had started to tire.

“Why don’t we just follow the Yaddamun Trail back to the start?” I suggested. 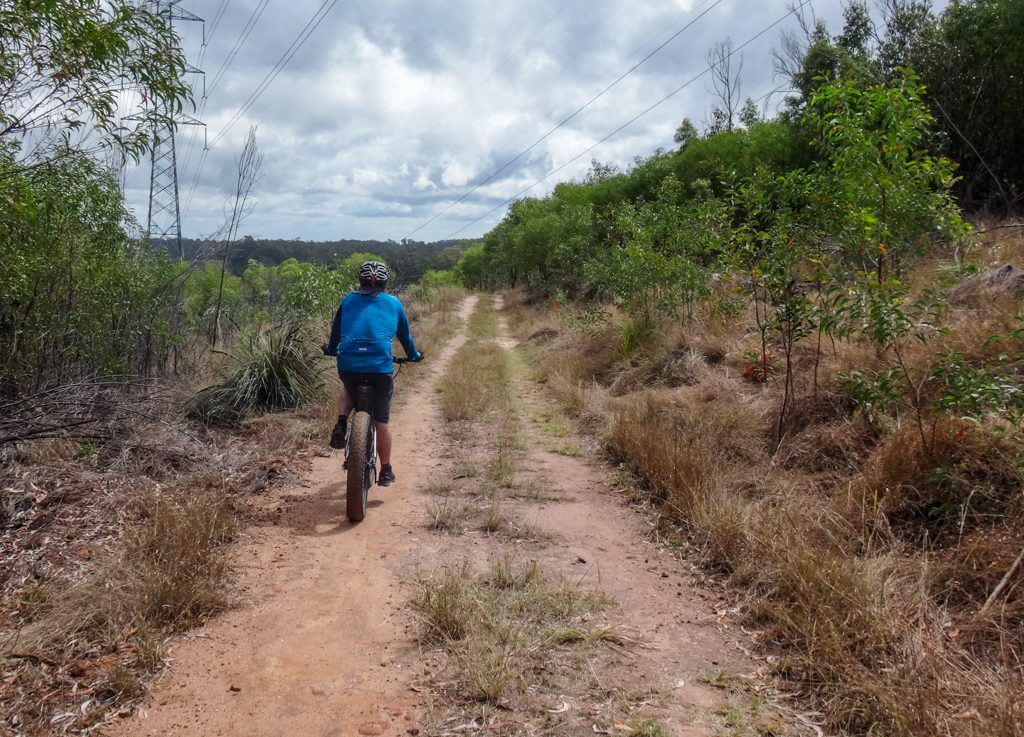 Some of the nearby hills were much steeper – this was the easiest and quickest way back. 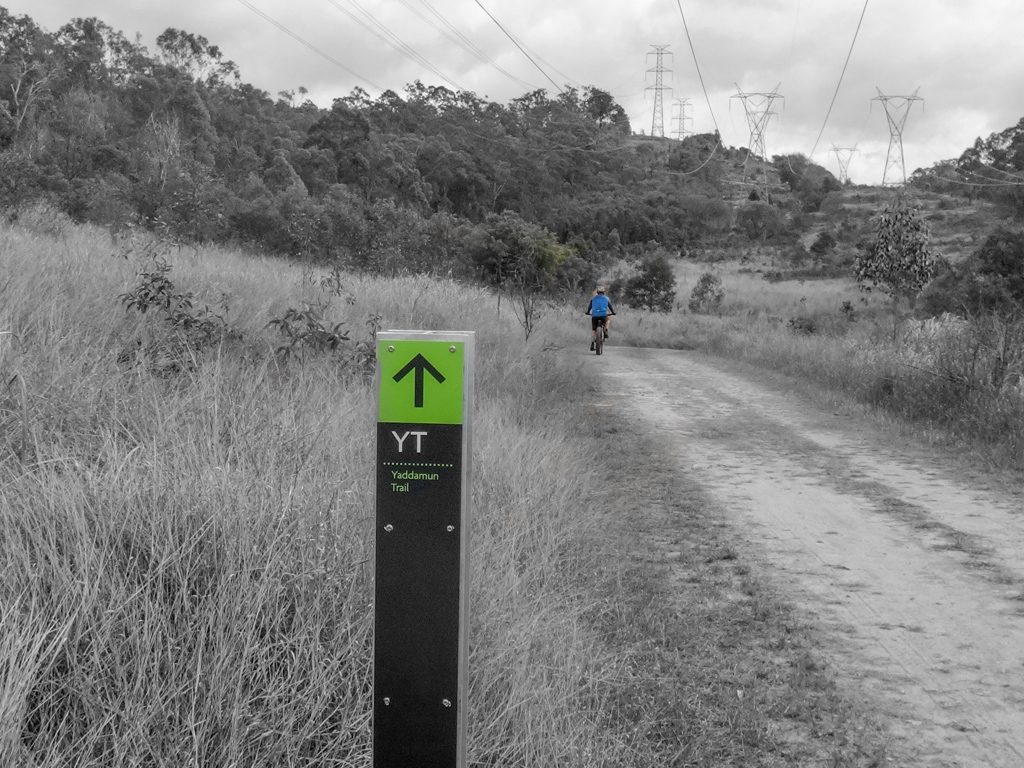 Getting back was uncomplicated.  We just followed the bright green “YT” markers back to the car park.

We rode almost thirty-one kilometres in just over four hours including breaks.

During that time we climbed about 1,100 metres in elevation and I burned about 2,000 kcal.

Despite the relatively short distance, this was a physically challenging ride.

Thanks Darb, Eric and Calum for a fun day out. 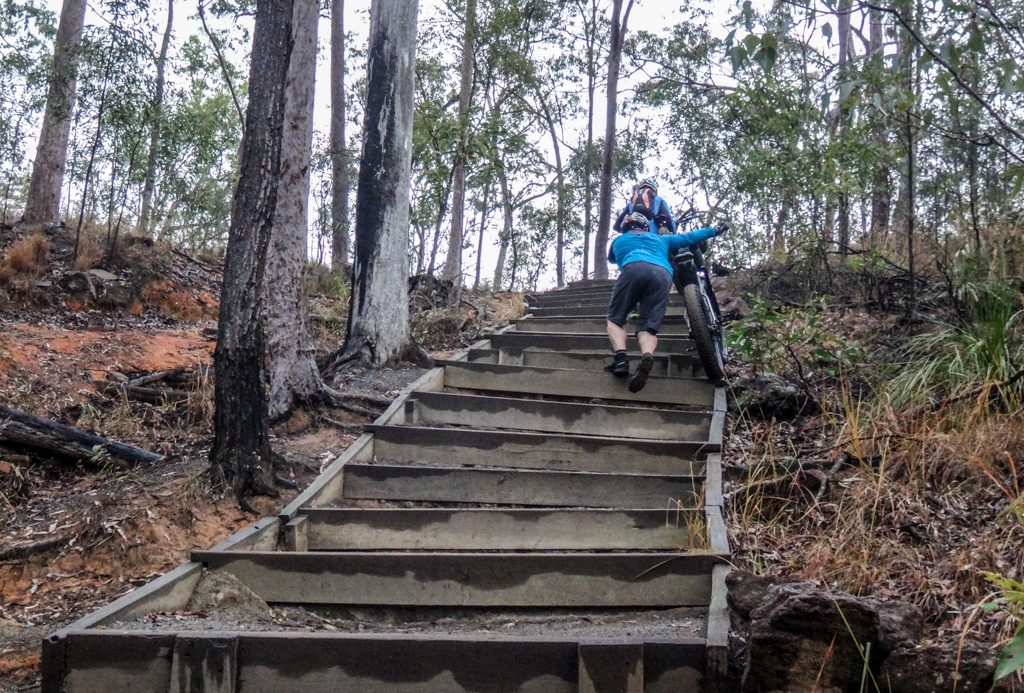