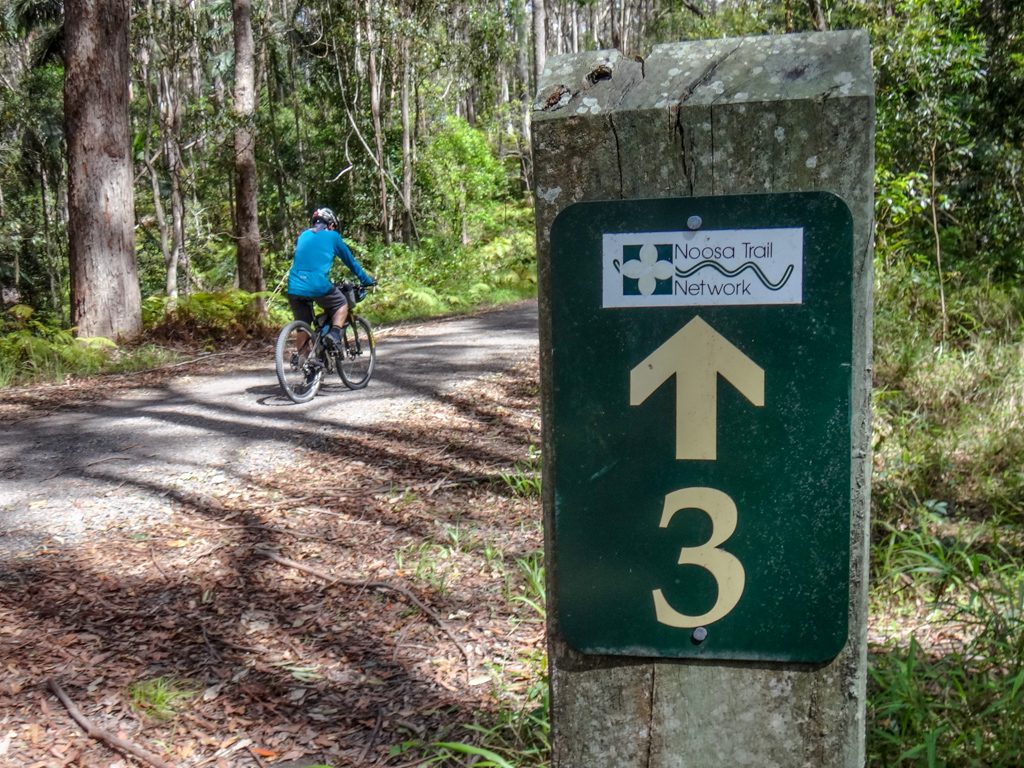 Woondum National Park spans the picturesque mountains near Gympie.  It’s a perfect place to explore on a mountain bike. 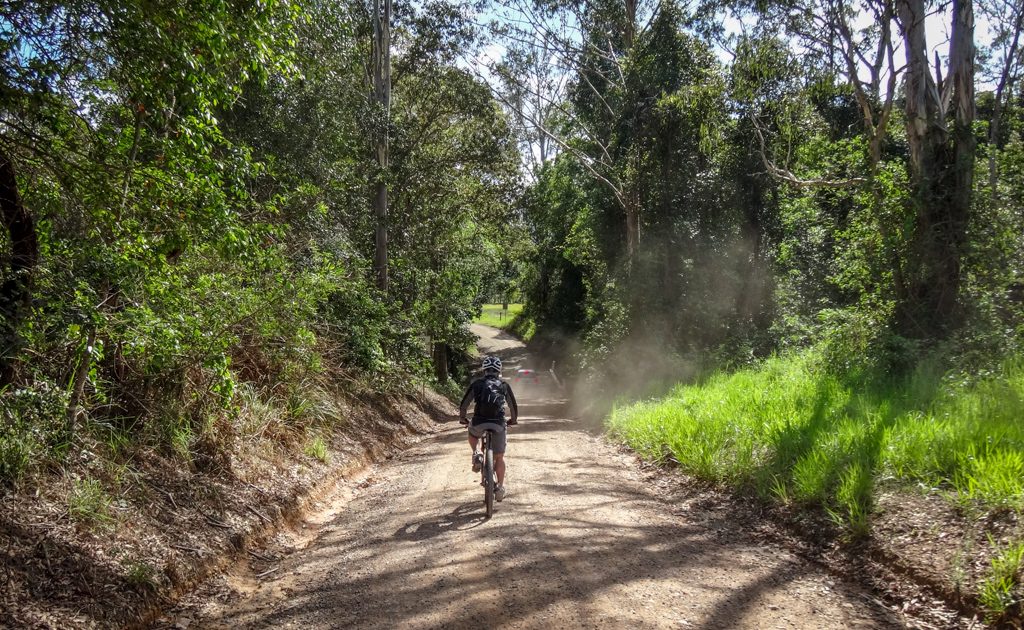 We parked our cars near Traveston Railway Station, south of Gympie, and pointed our bikes up into the hills. 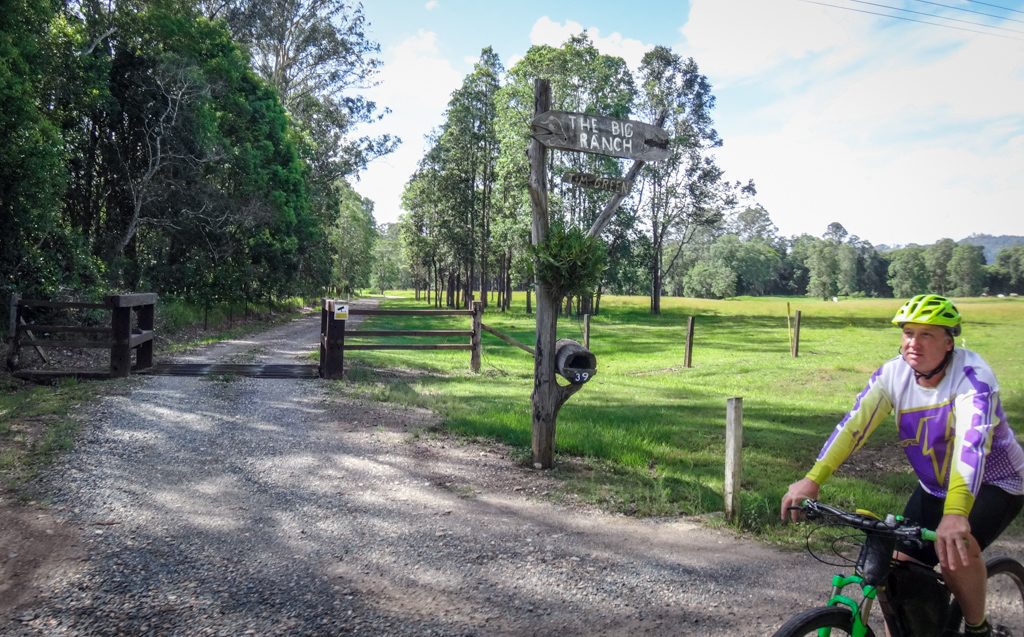 The surrounding landscape is a patchwork of lush farms dotted with well-fed cattle.

The weather has been kind to the farmers of Traveston. 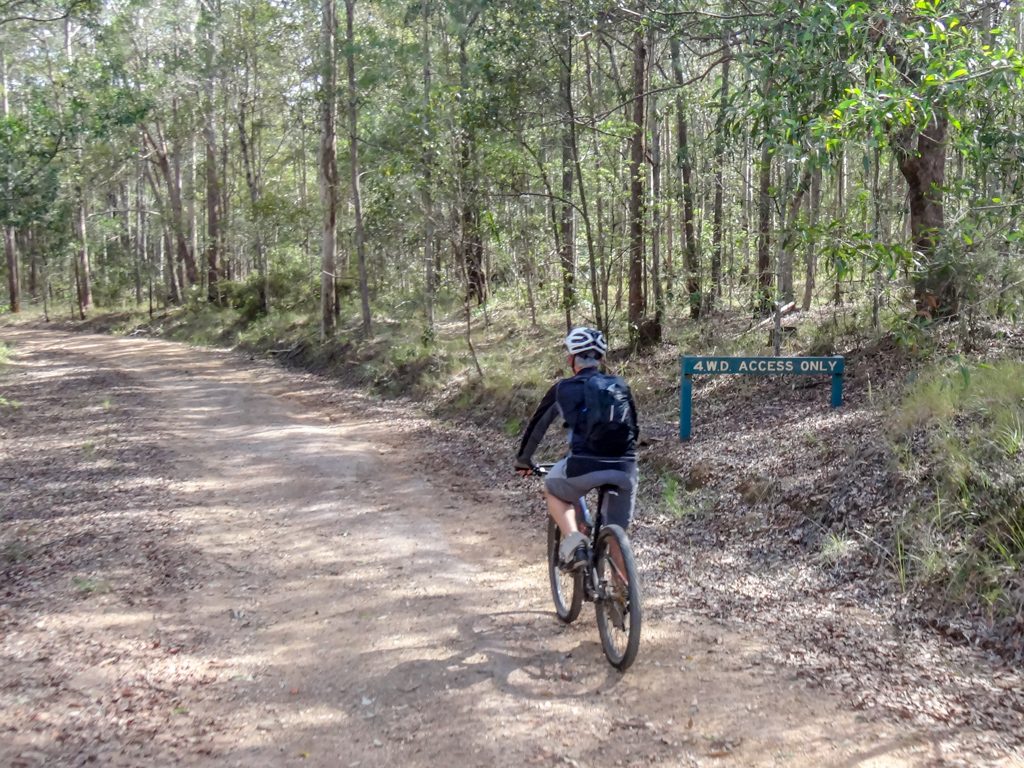 A quarter of an hour later, we entered the national park.  This place is popular with four-wheel drive enthusiasts… 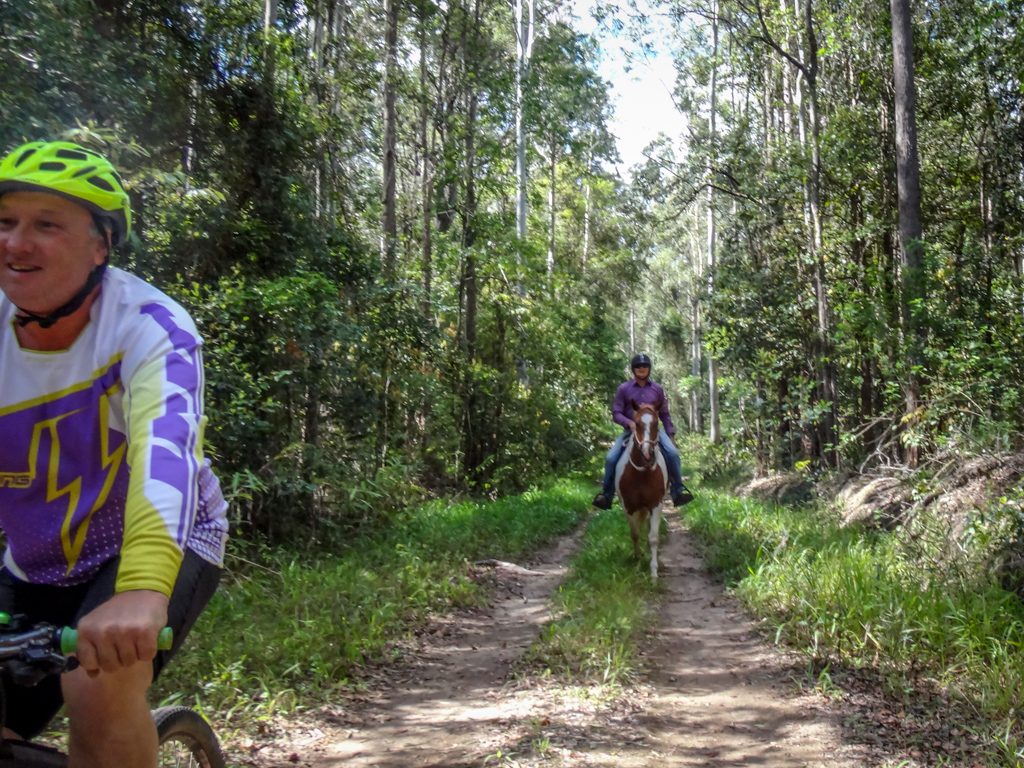 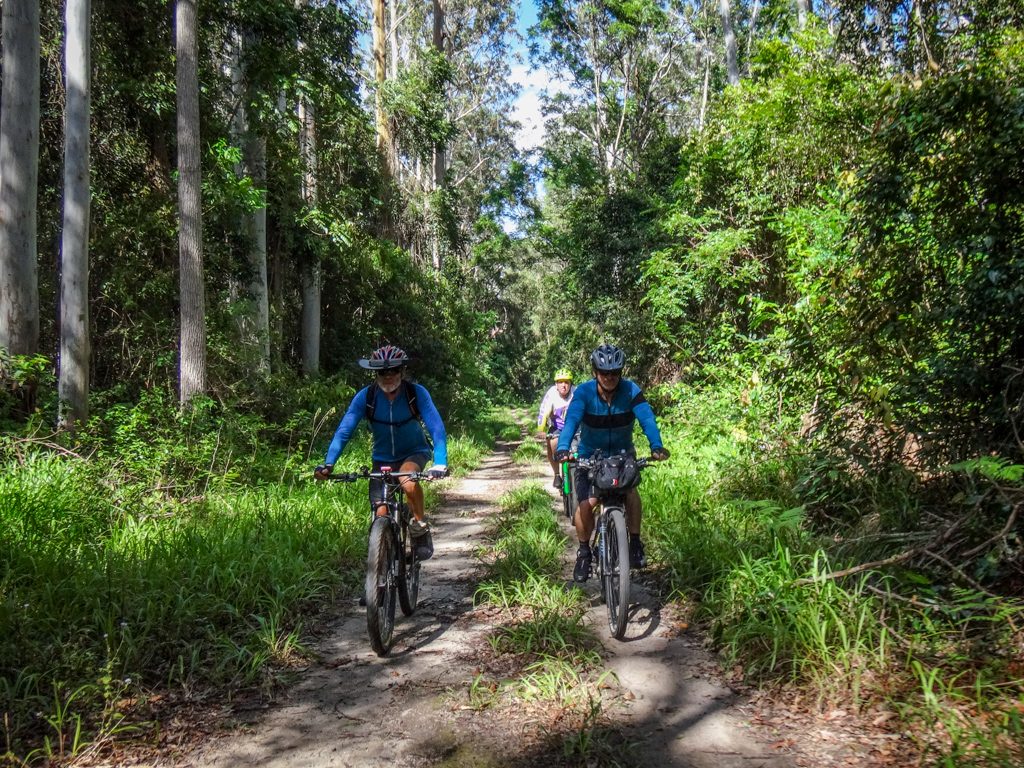 Mountain bikers love it too.

The tall trees provide welcome shade from the sun. 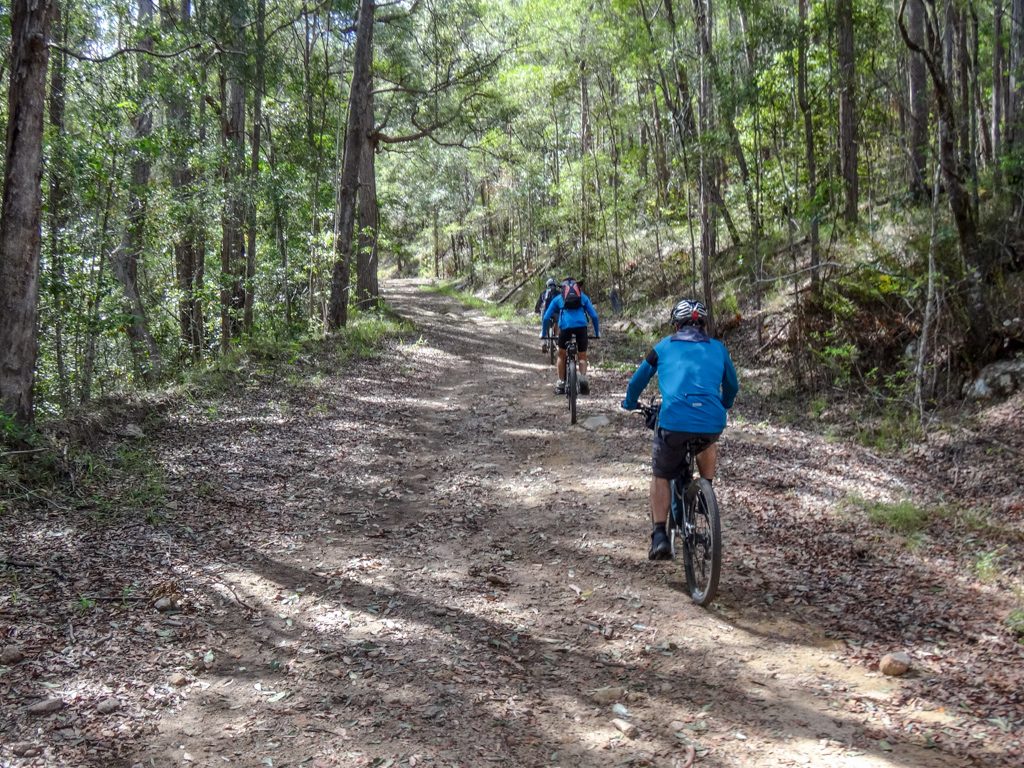 The track started pointing upwards.  It was time to click down a few gears and start working harder. 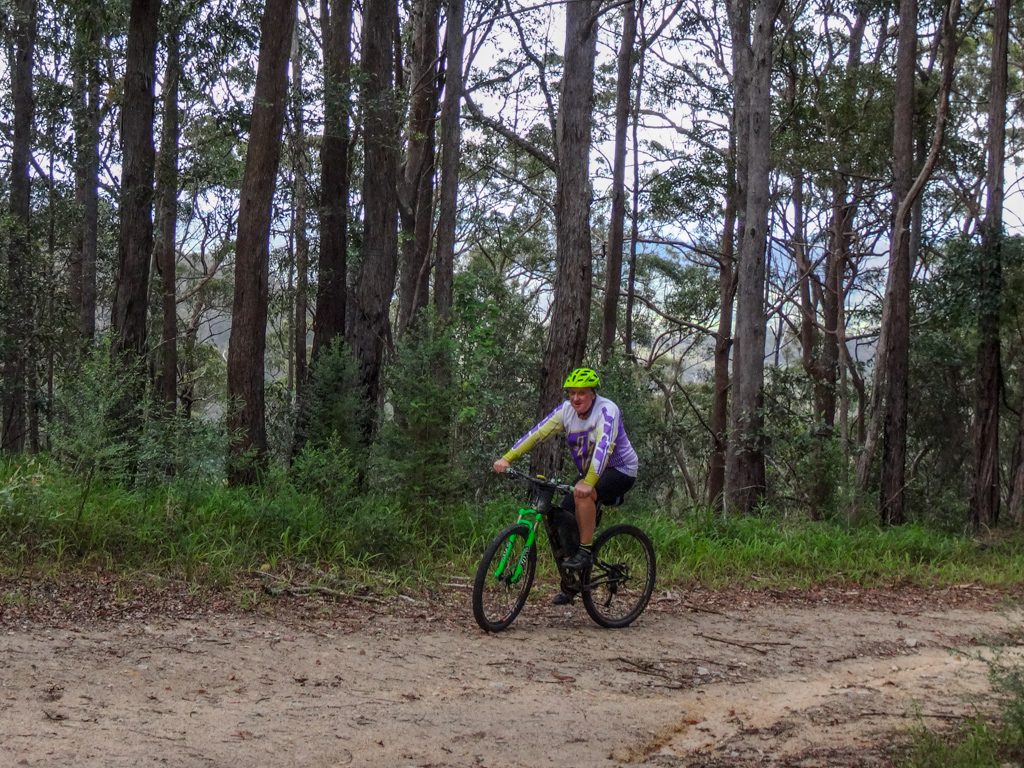 Through the trees we caught glimpses of the landscape below us. 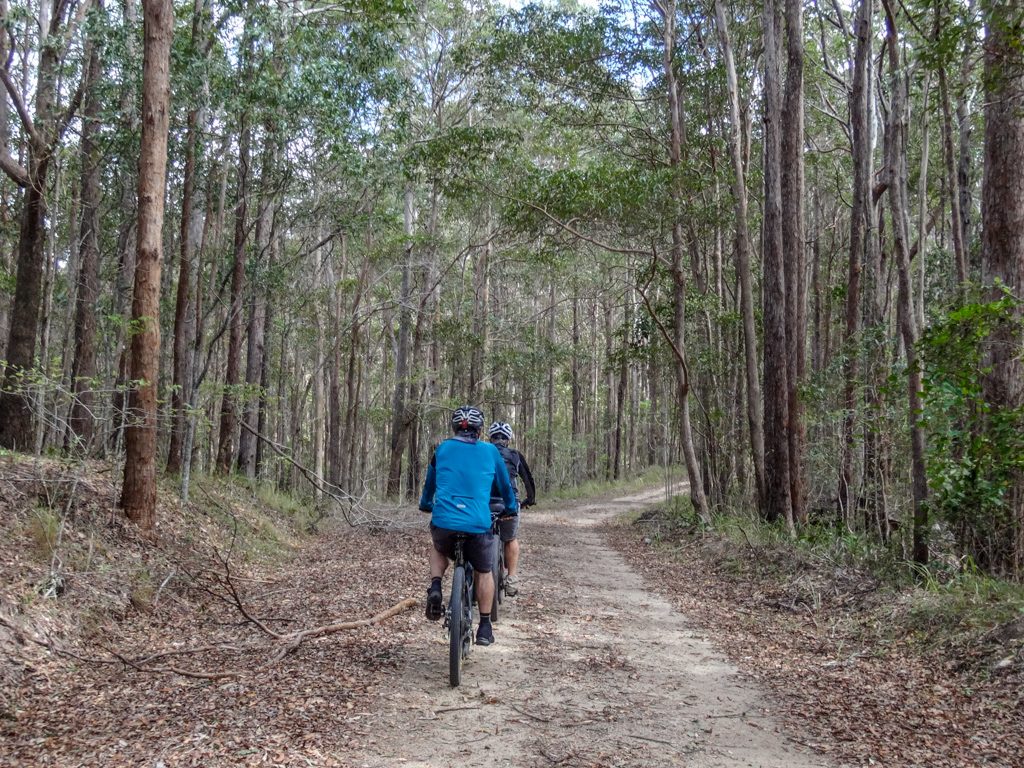 On this stretch we gained about four hundred metres in elevation over about four kilometres.  The gradient fluctuated around ten percent – reasonably hard work, but rideable. 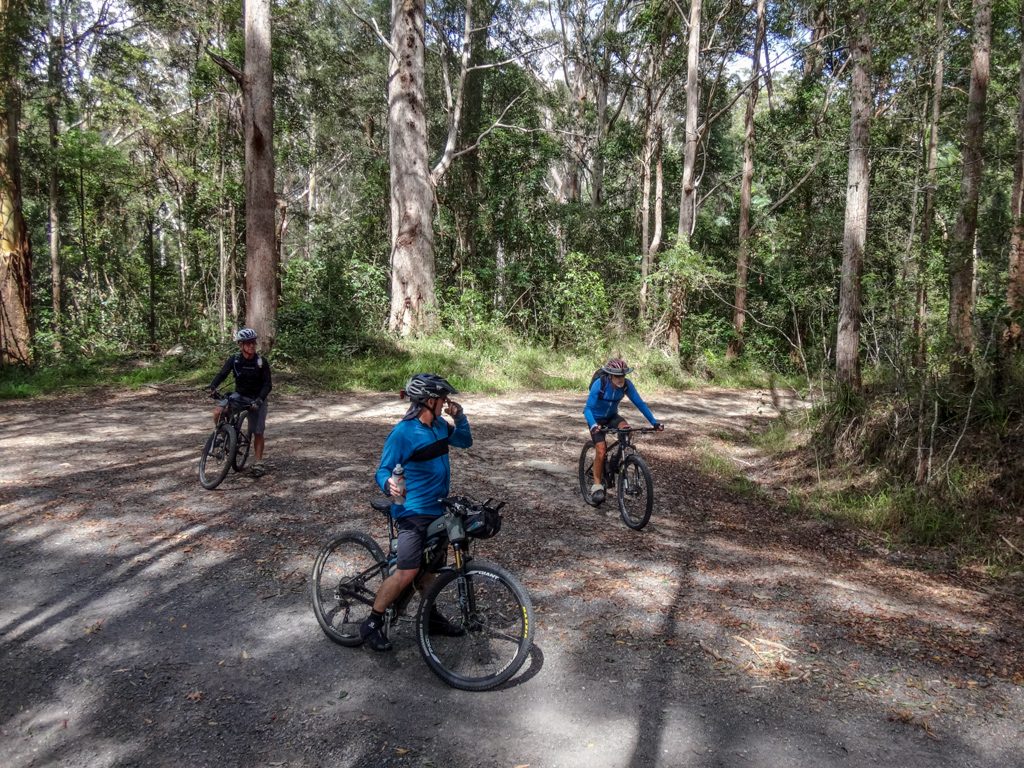 Eventually we reached Hill Road.  Paul and I had ridden up here a few years ago while exploring the Noosa Trails Network.  The OCD map monkeys in my head always feel satisfied when the route from one ride overlaps the route from an older ride.  They all join up over time making a wonderful spiderweb of ride routes branching out over my local area.

The road flattened out, allowing us to coast a while, cool down and catch our breath. 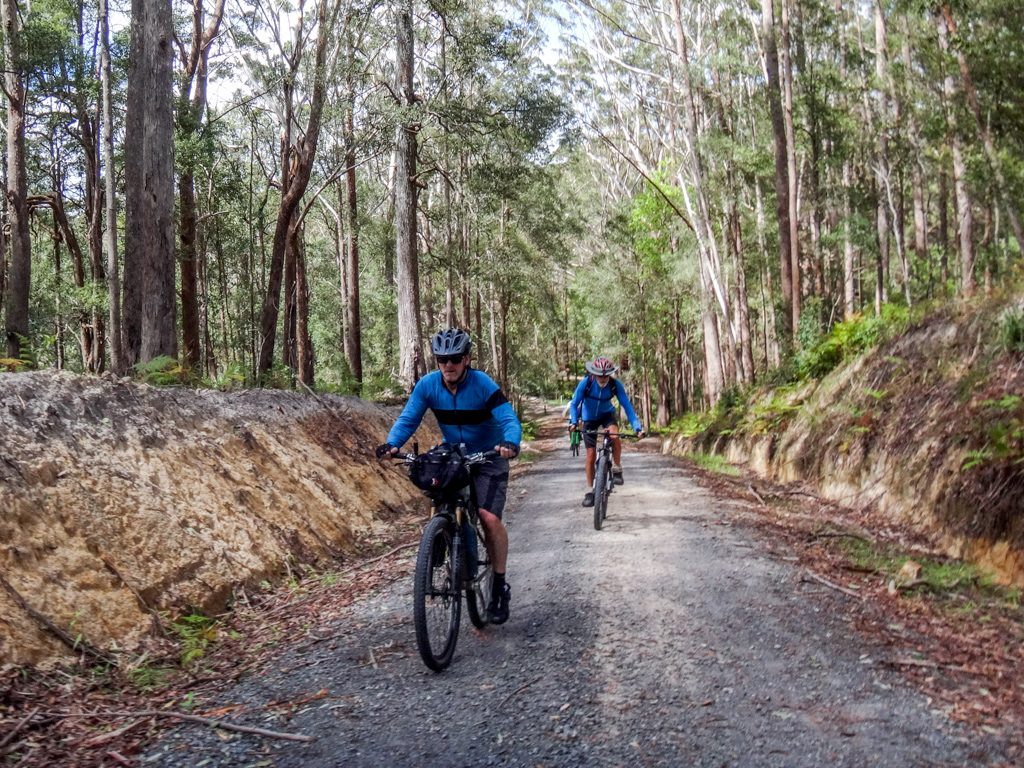 Although we’re only  three weeks away from summer, a cool fresh breeze kept the temperatures down as we rolled along the top of the range…. 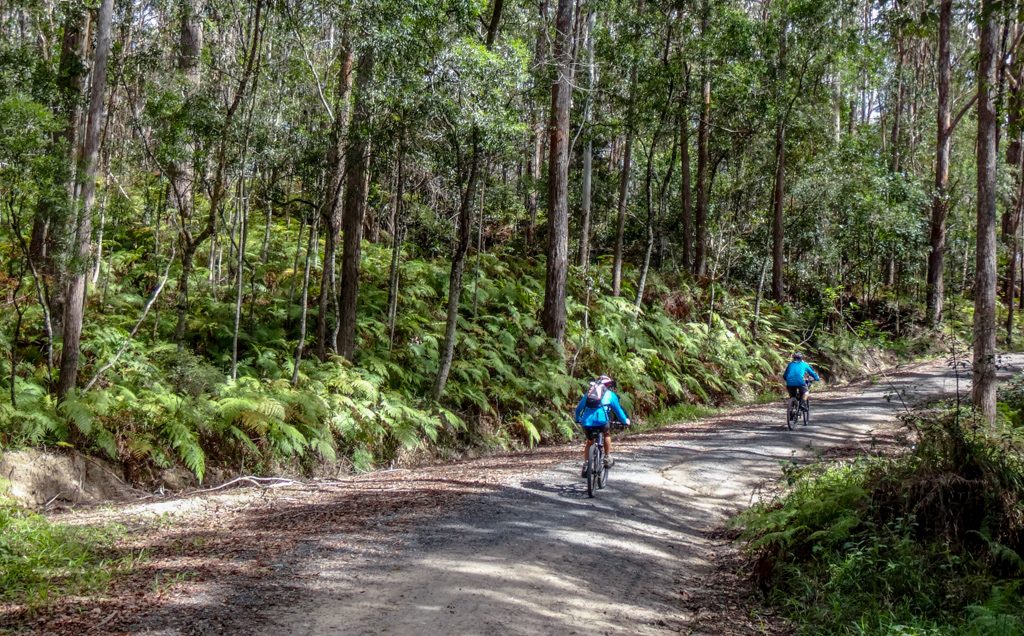 This was a perfect day to be riding.  Not too hot, not too cold.  Goldilocks would have been very happy. 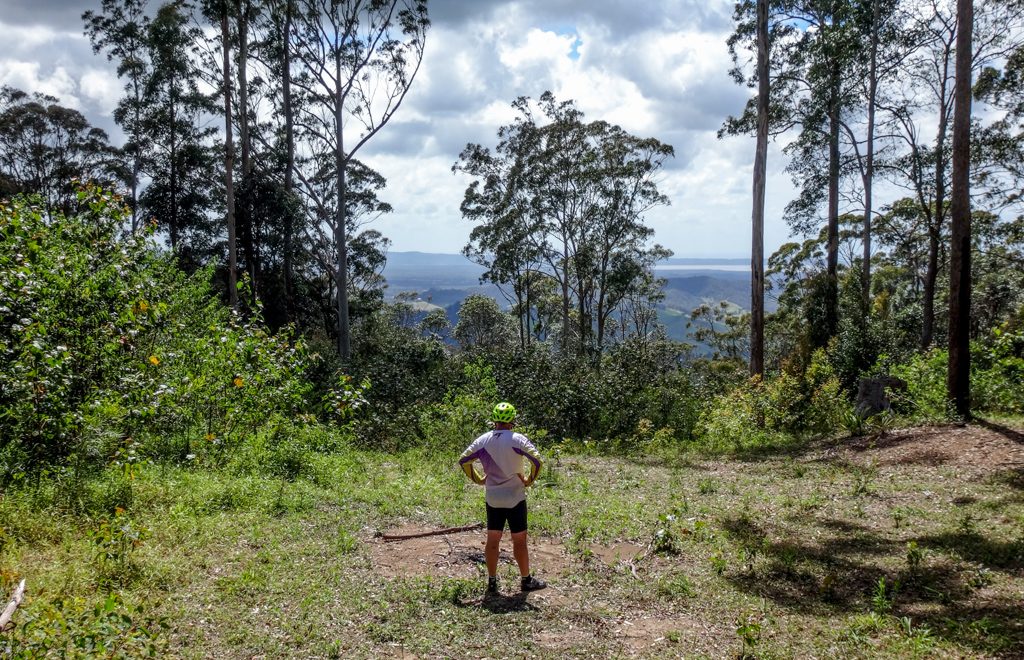 To our right, the terrain dropped away sharply.

When we got the chance, we parked the bikes to check out the view.

In the distance we could just see Lake Cootharaba, and behind it, the large sand dunes of the Cooloola Coast. 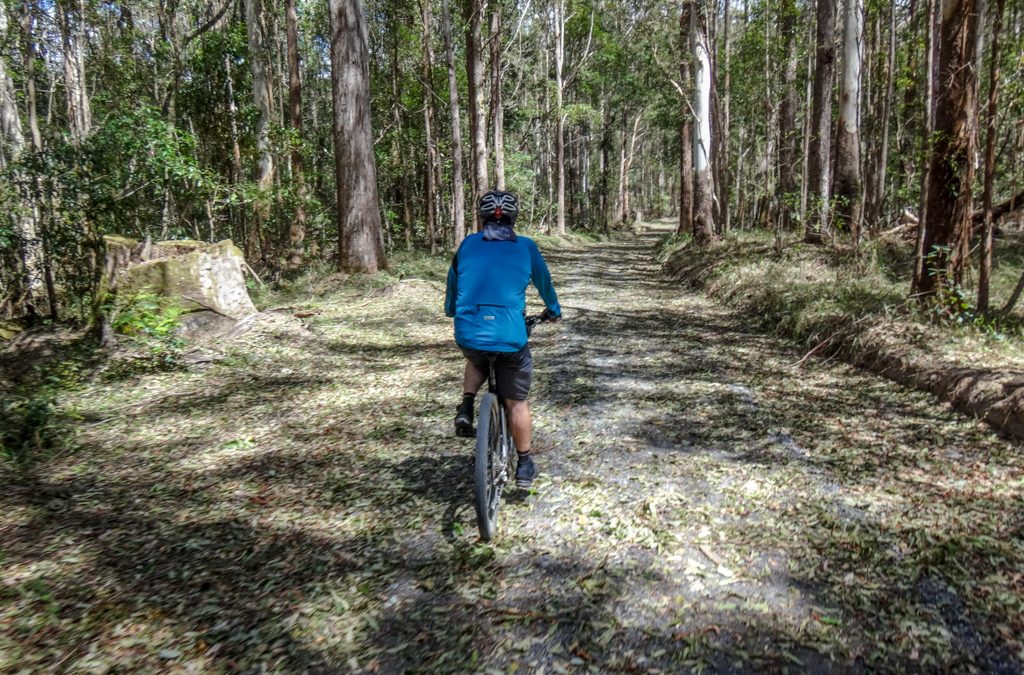 The highest point in the area is Mount Boulder which is accessed via an out-and-back track.

We followed the track for about five kilometres.

Darb said he thought this was caused by a recent hail storm.  Hail stones probably split the leaves like this, forming a verdant carpet for us to roll over. 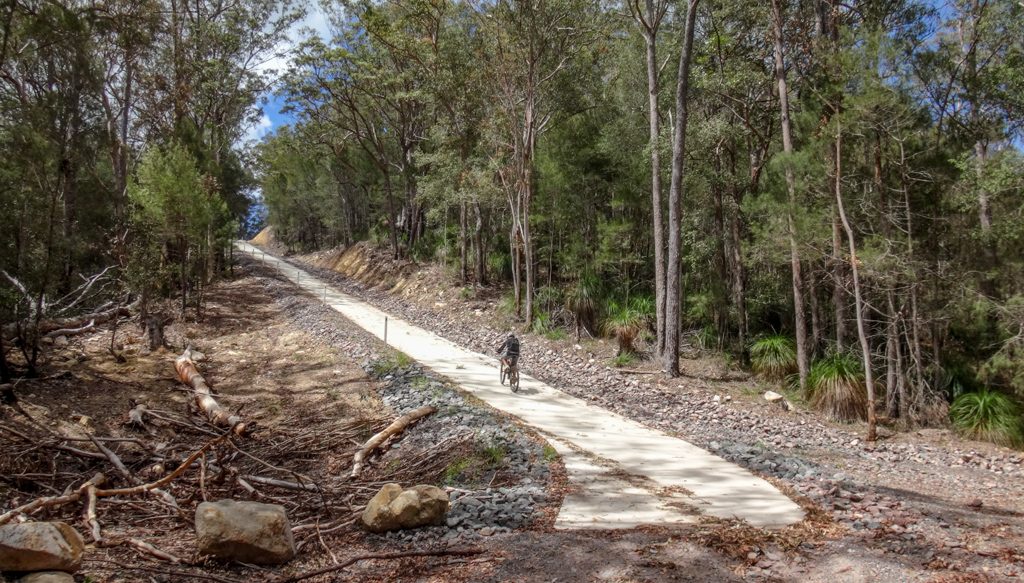 More unusual was this strange path near the summit of Mount Boulder.

A horse rider had told us earlier in the day to expect a steep rock scramble to the summit.

Instead, we found a concrete path, but unlike most paths, this one was very steep…

The gradient was a continual 25% grind.

Most of us mere mortals just walked our bikes up.

Darb mashed his pedals as hard as he could while we cheered him on. 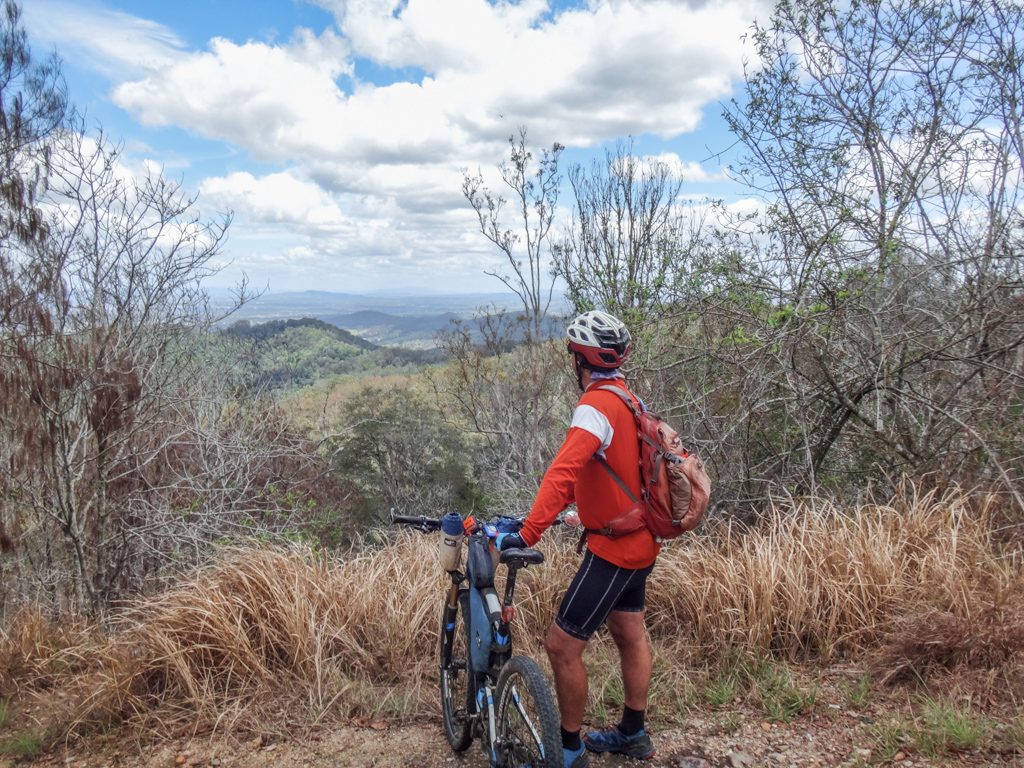 We enjoyed good views from the top north-west towards Gympie. 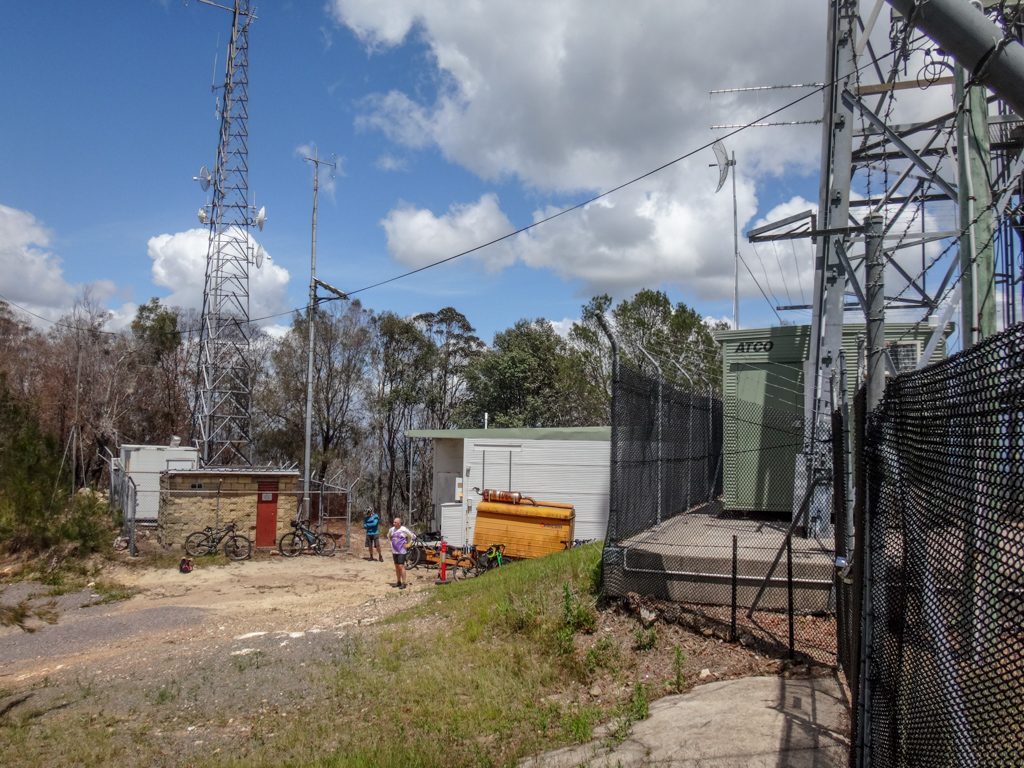 There’s lots of communication equipment on the summit of Mount Boulder.  No wonder they needed to pave a track to the top.

From this point it’s a short steep 1.6km hike down the side of the mountain to the Rock Pools.

We decided to play it safe and take the long way back via the gravel road.  It was ten kilometres this way, but we’d arrive in one piece. 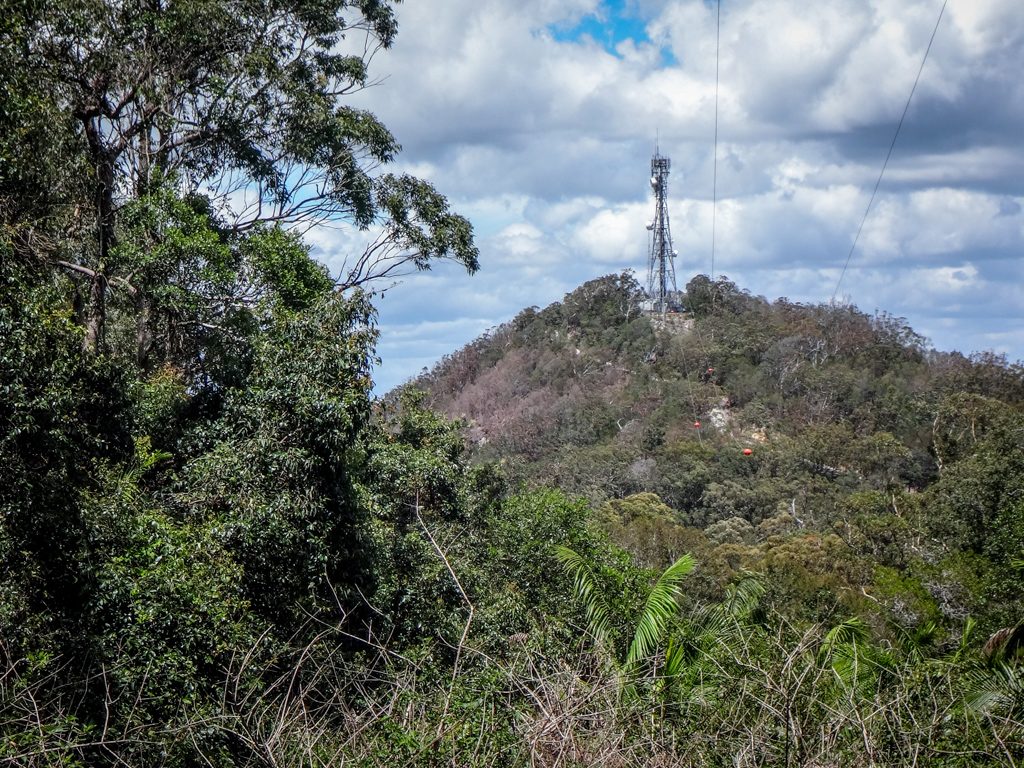 At the bottom of the hill we looked back up towards the summit.

That was one steep road.

I wonder how they got a cement mixer up there? 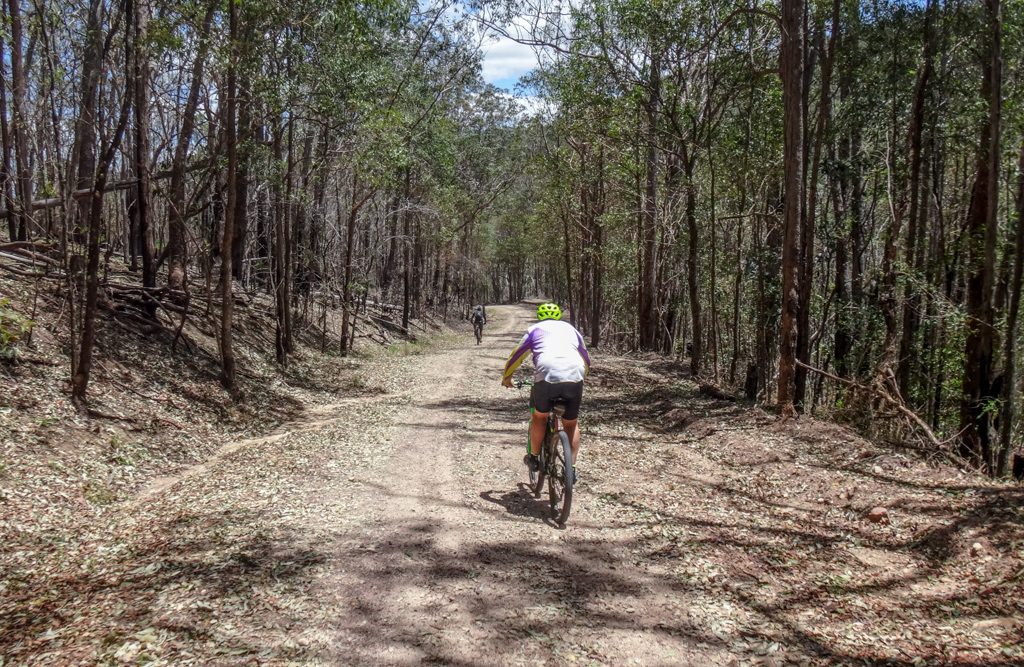 As we bounced down Hill Road, I thought how difficult it had been to gain this altitude, but how easy it was to lose it.

What took us almost an hour to climb would disappear behind us in a matter of minutes. 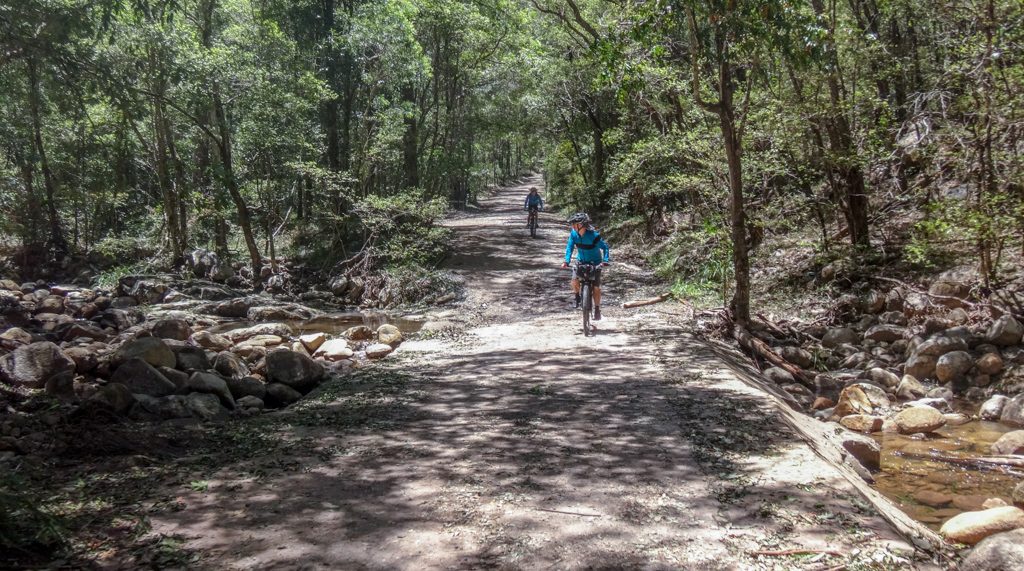 The gravity gods are tough but fair, and we were soon crossing Woondum Creek at the bottom of the hill. 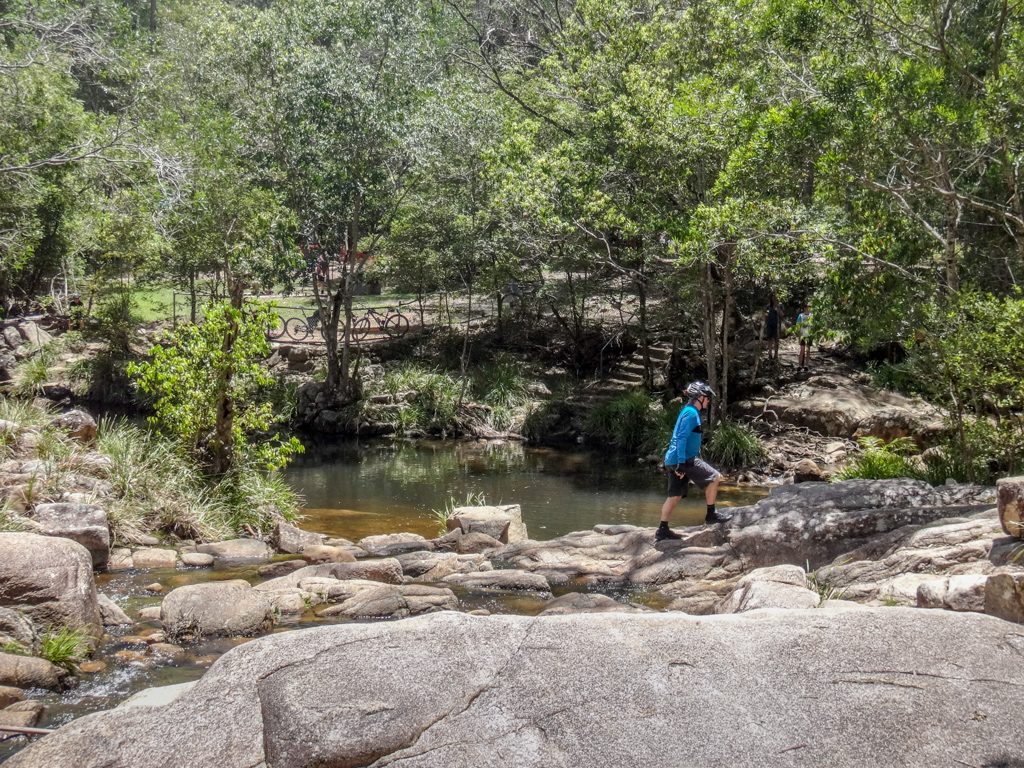 We spent a while carefully hopping over rocks in our cycling shoes.  Their hard soles are not meant for scrambling over boulders. 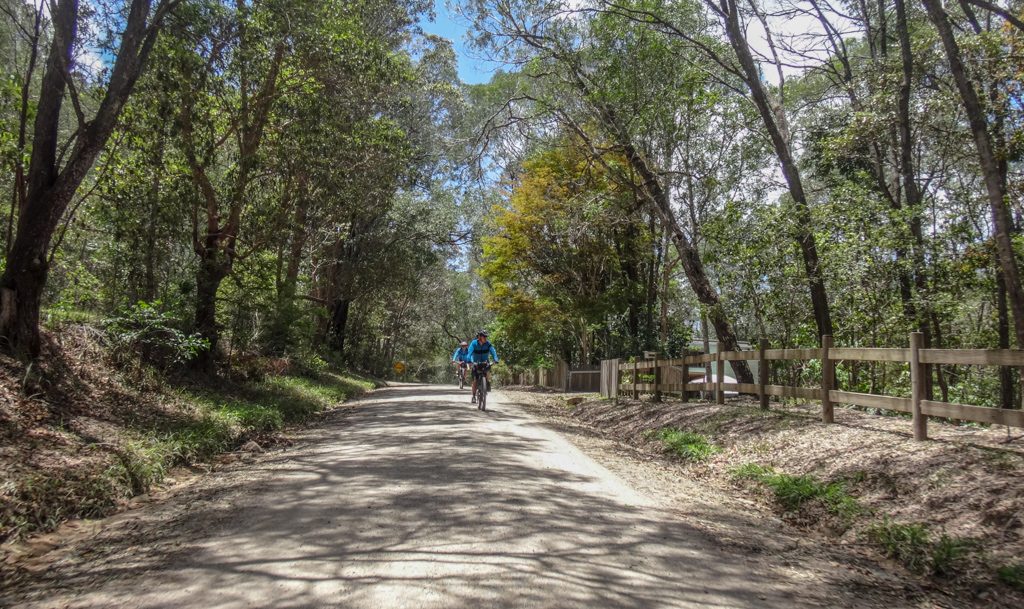 After a short break, we jumped back on the bikes and followed Hill Road past more contented farms. 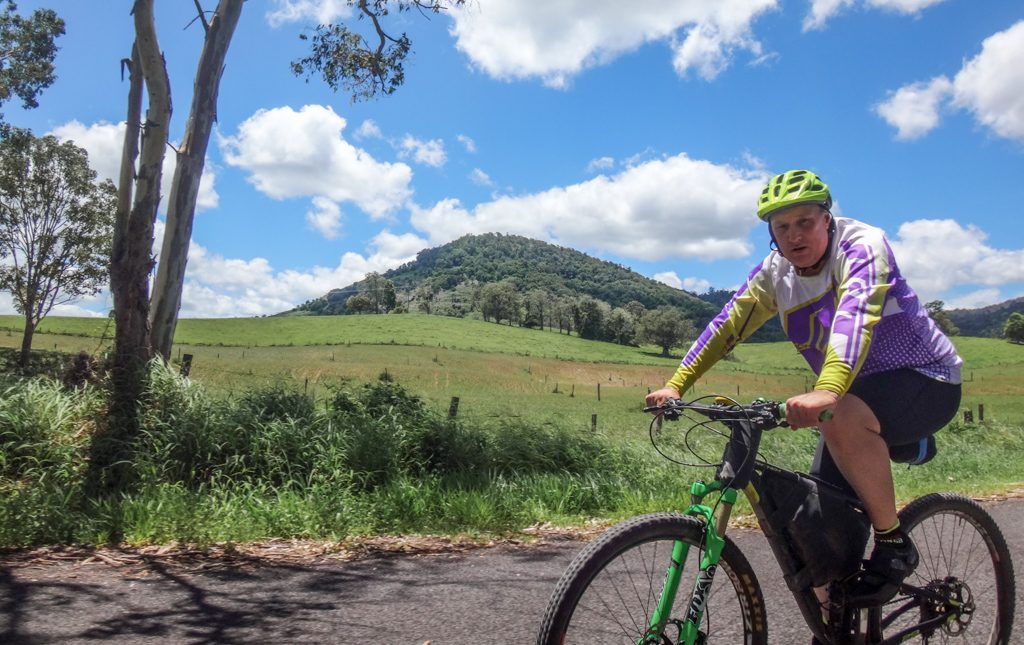 Gympie is fortunate to be surrounded by some beautiful landscapes.

After a short stint on a paved road we rode back into the National Park. 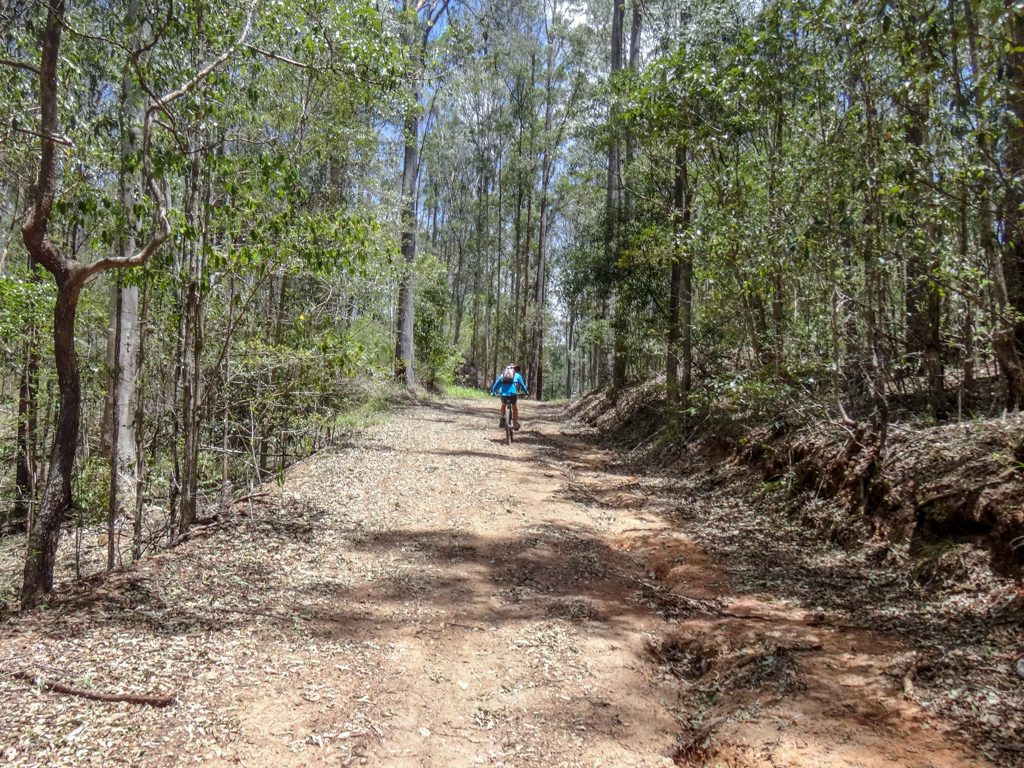 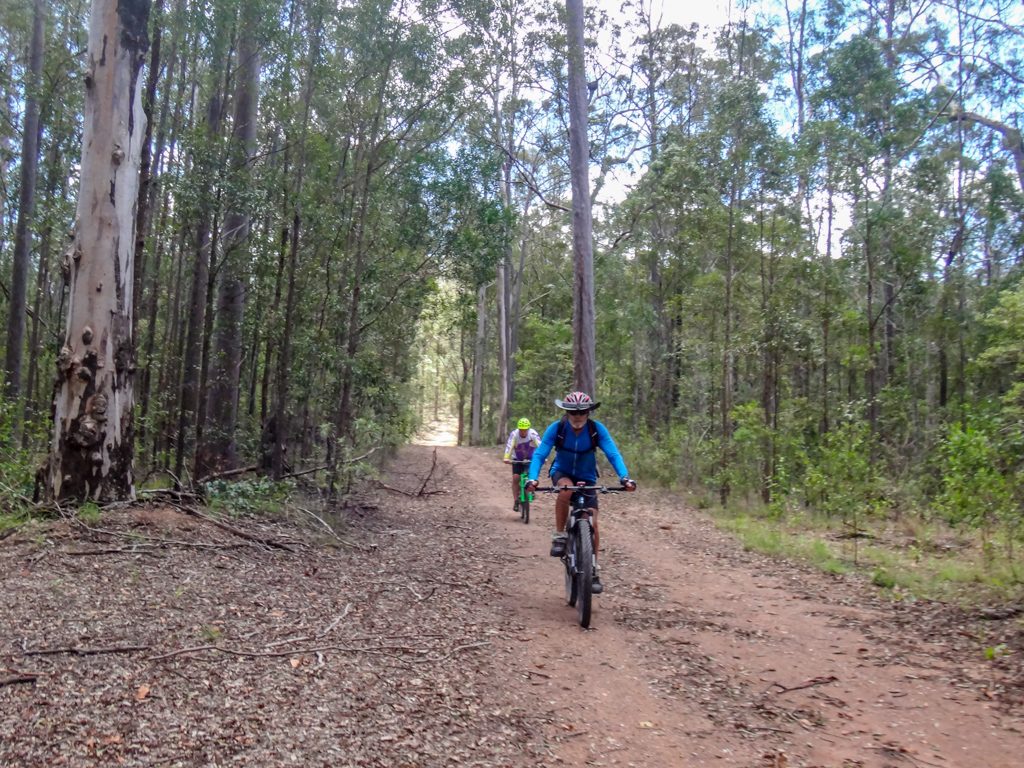 I pulled up beside Calum as we slowly pedaled over another hill.

“My legs are sore,” I complained.

“It’s not far now,” he said. “Only four or five kilometres.”

My mood lifted immediately.  I grinned and turned the pedals more enthusiastically. 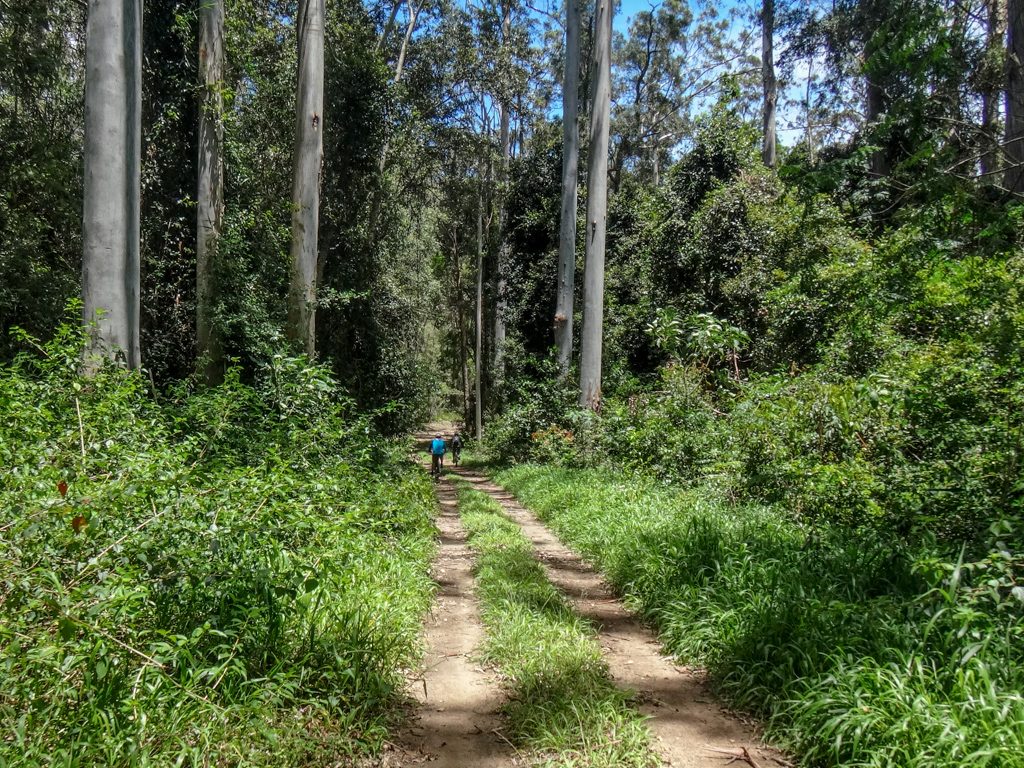 We had been here earlier in the day.

Not long to go now! 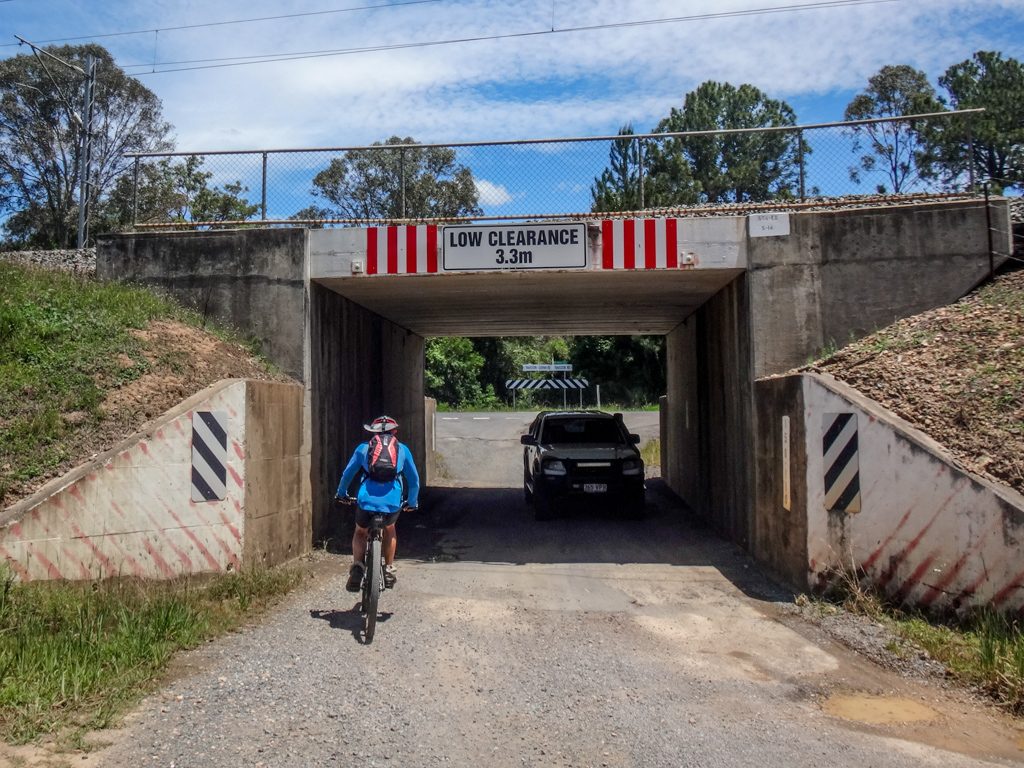 A few minutes later we rolled back under the railway bridge to Traveston.

We rode about forty kilometres in just over four hours.  During that time we climbed over a thousand metres in elevation and I burned about 1,800 kcal.

This ride was moderately difficult – mostly because of the long climb at the start.  But we were lucky to have cool weather.  On a warmer day it would have been much tougher.

Thanks Darb, Eric, Simon and Calum for another fun day on the bikes.