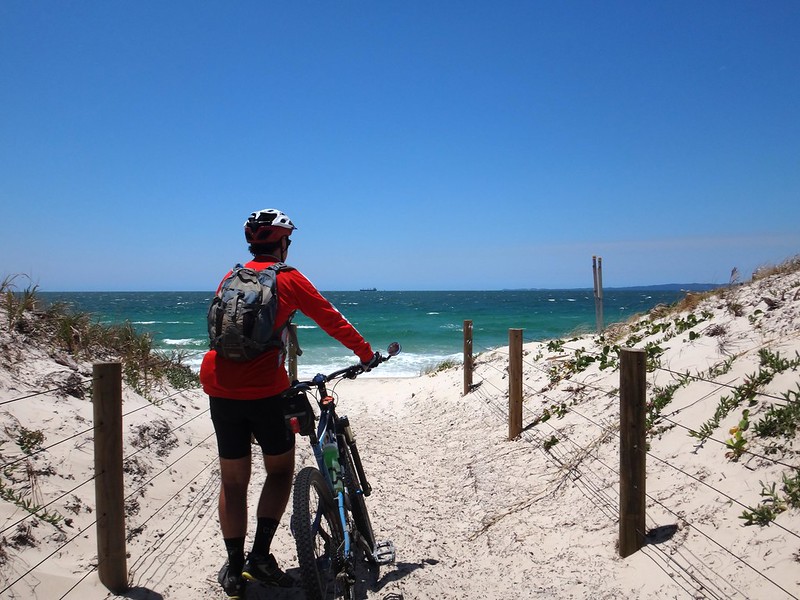 The aim of today’s ride was to join up a gap in my map. I’ve ridden through Ningi before with my friend Darb, and had a great time on the beach at Bribie with Murray riding Fat Bikes.

I’ll be having an operation in a couple of days, and my surgeon told me to avoid any activities which could might cause scratches or cuts to my skin, so a nice easy ride between Ningi and Woorim was the perfect choice.

The town of Ningi gets its name from the Ningi Ningi aboriginal people who lived in the coastal area east of Caboolture. The language spoken by the Ningi Ningi people was called “Oondoo” and is a dialect of the Kabi language group. The word “Ningi” means “Oyster” in the Oondoo dialect, so the name probably comes from the large number of oysters which could be found on the rocks around Sandstone Point near the Bribie bridge. 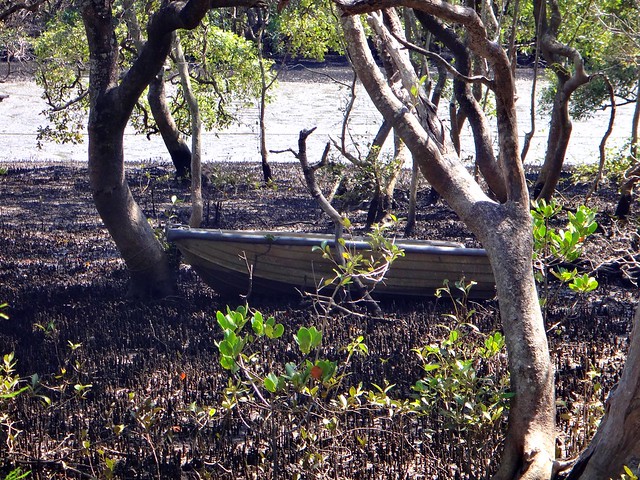 To avoid the main highway, I followed some quiet back streets through Ningi to the “Esplanade” which follows Ningi Creek towards the ocean. 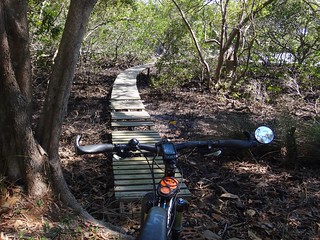 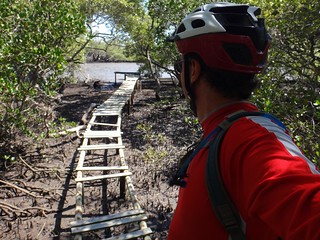 One interesting aspect of the Esplanade is the number of small private walkways that jut out through the mangroves, allowing residents to get to their boats on the creek. One wooden walkway looked inviting, but the small voice of reason in the back of my head kept reminding me to avoid scratches, so I gingerly walked to the end rather than riding it. Which us just as well because there were a few large gaps in the pailings. 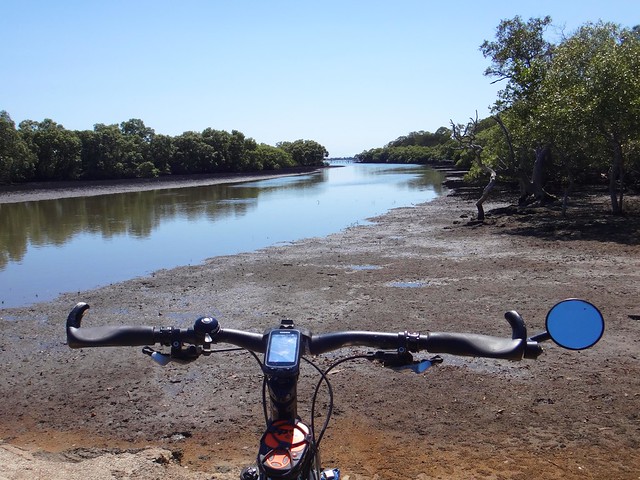 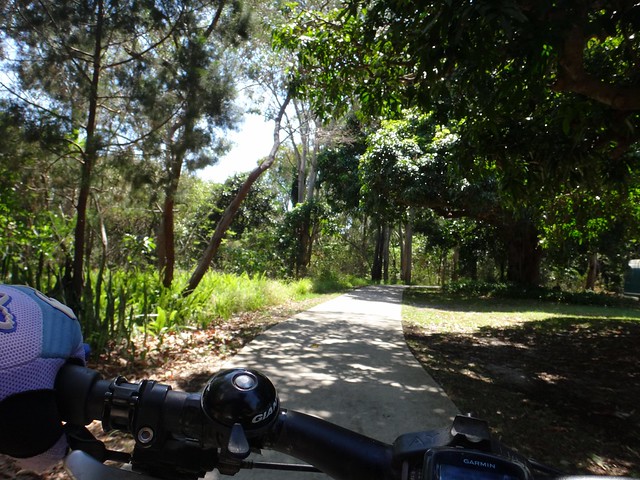 It’s a pleasant, easy ride by the water along the bikepath, which stretches almost 6km to the Bribie bridge. I just chilled out, turned the cranks, and felt glad to be alive. 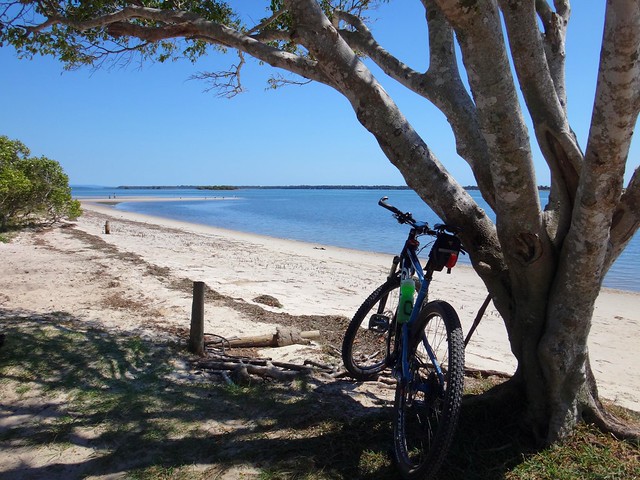 I took a short detour down to the beach at Turners Camp, remembering Kalmakuta – the Joondoobarrie aboriginal woman whose footsteps I traced a few months ago. 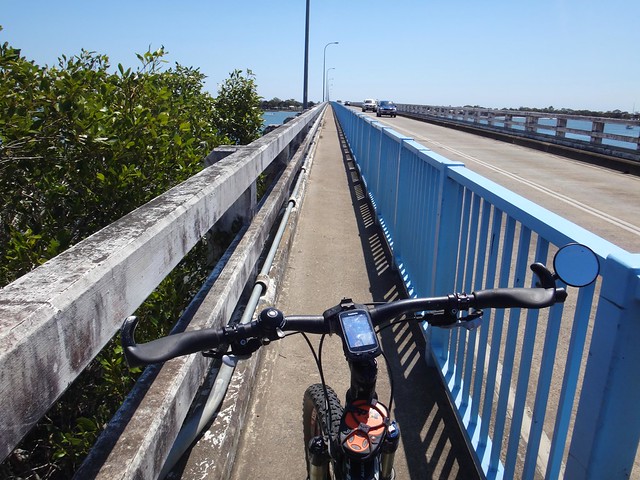 On thing that worried me about today’s trip was how I was going to get across the bridge. It’s narrow, with lots of traffic passing either way. If I crossed via the road I’d have a lot of angry impatient drivers behind me as there would be no room to pass. But the footpath is really narrow. I was worried that there would not be enough room for my handlebars.

After I pushed my mirror to one side, there was enough room for me to ride carefully across. For anyone else wondering about cycling over the bridge at Bribie I’d recommend the footpath. Just take it easy and stick to the middle of the path. 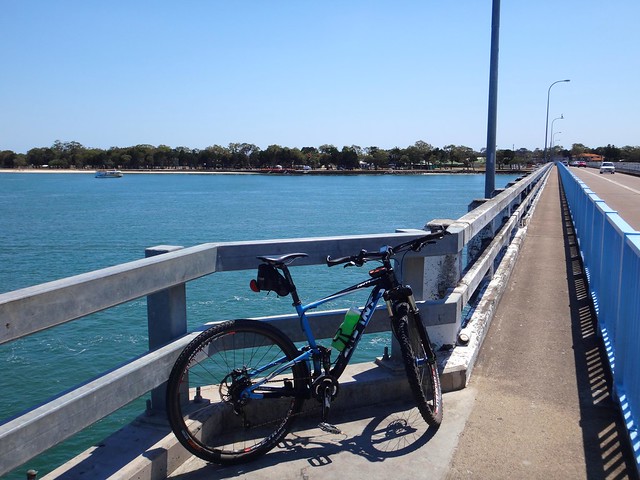 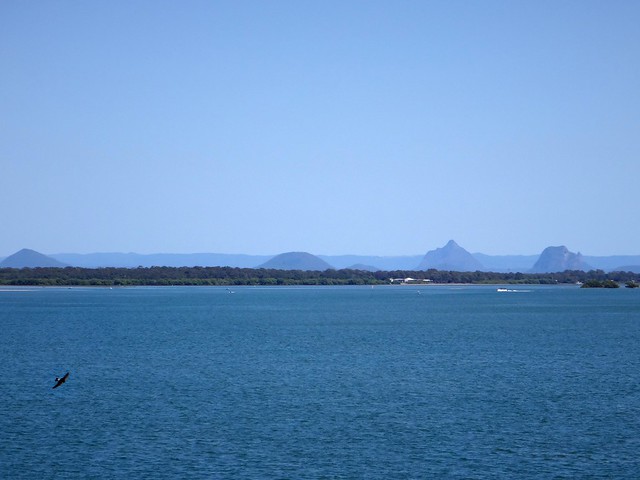 I used one of the passing bays to stop and take a few pics of the Glasshouse Mountains to the north-east. Over the last few weeks I’ve looked at them from a number of different directions. Looking at then from the water, I remembered Lt James Cook saw them from his ship as he sailed up the Queensland coast in 1770 and thought they resembled the conical furnaces in England that were used to manufacture glass at the time. 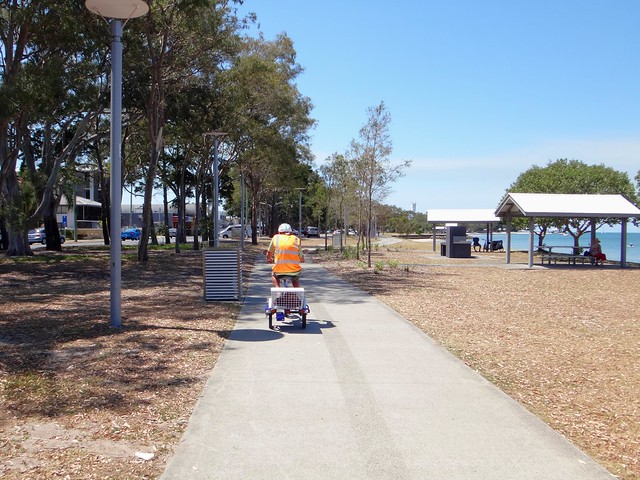 At the end of the bridge I followed the bike path south, past happy groups of families relaxing by the water towards the quiet seaside suburb of Bongaree. 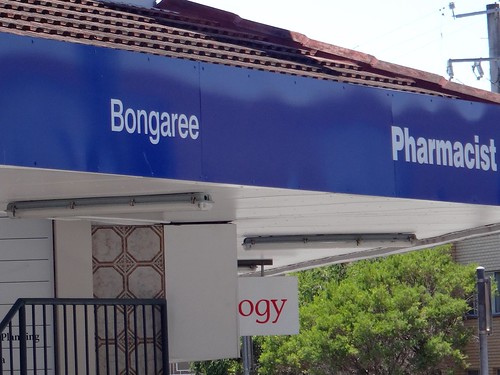 Bongaree was an aboriginal man from Broken Bay near Sydney. He learned to speak English and accompanied Matthew Flinders on the sloop Norfolk as he explored the East Australian coast line. European settlers mistakenly believed that all Australian aborigines spoke the same language, and that somehow Bongaree would be able to serve as interpreter for Flinders. Nothing could have been further from the truth. At the time of European settlement there were two hundred and fifty different Aboriginal languages in this continent. In 1996 David Horton produced a wonderful map illustrating this point.

An intelligent and entertaining man, Bongaree became the first Aborigine to circumnavigate the Australian continent in 1802. He had an uncanny knack for “reading” people’s intentions from non-verbal cues, so despite not being able to interpret for Flinders he was still able to greatly assist him when contacting new groups. He also had an acute sense of humour, and was able to mimic the affectations and mannerisms of many of the colonial leaders. He wore discarded naval uniforms and a cocked hat, and impressed new arrivals at Sydney Harbor when he welcomed them with a flamboyant bow and wave of his hat. 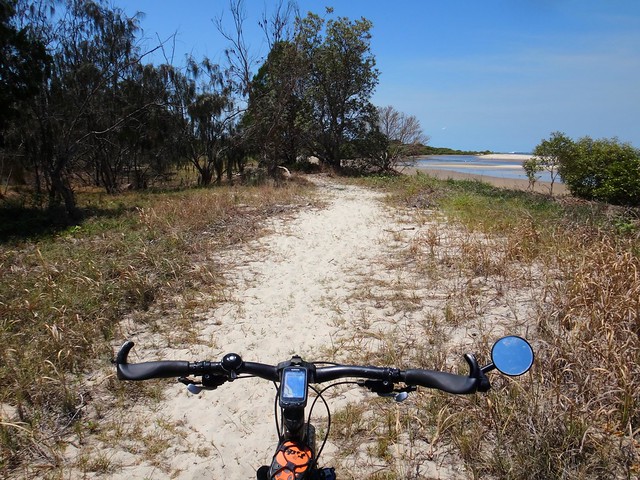 As I reached the end of the bike path, south of Bongaree, I took my chances on a sandy path near the beach. Riding the fat bike on sand a couple of weeks ago had given me an appetite for beach riding. Unfortunately I came back to earth (sand?) with a thud as I realzed soft sand was no place for my skinny 2.1 inch tyres. I ended up walking a couple of hundred metres instead. 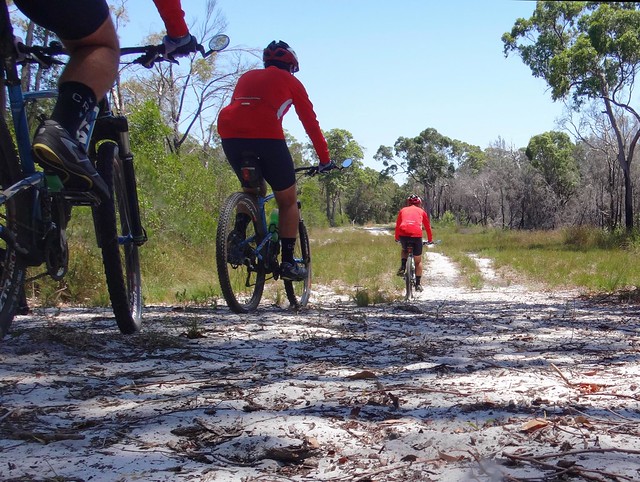 From there I followed a few sandy fire trails eastwards towards Woorim. The ground on some of the trails was a bit firmer and I was able to ride without any hassles. 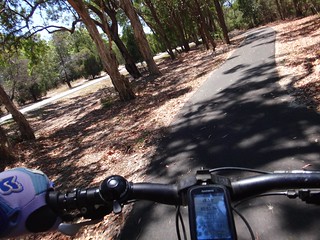 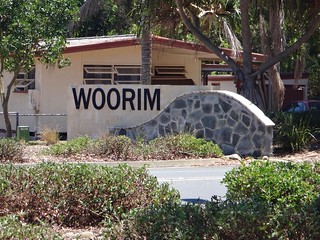 This eventually brought me out on the east-west bike path on First Avenue, the main road between Bongaree and Woorim. Like most places on Bribie, it’s quite flat and is ideal for a low-impact, cruisy ride. 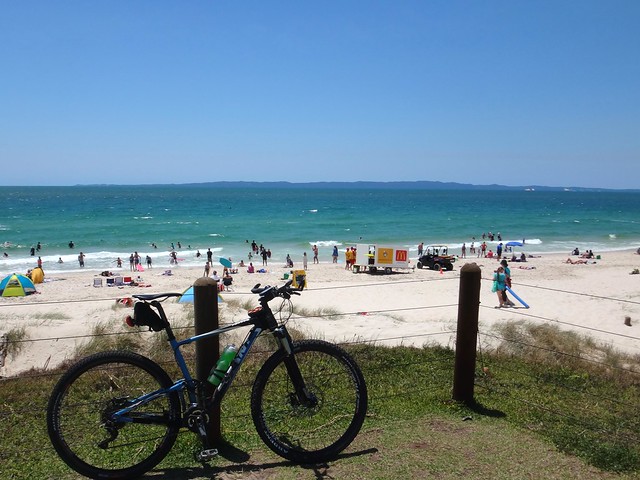 The blue sky, warm breeze and turquiose waters of Woorim Beach welcomed me. It’s a beautiful unspoilt place with clear views towards the northern tip of Moreton Island, and some great cafes. 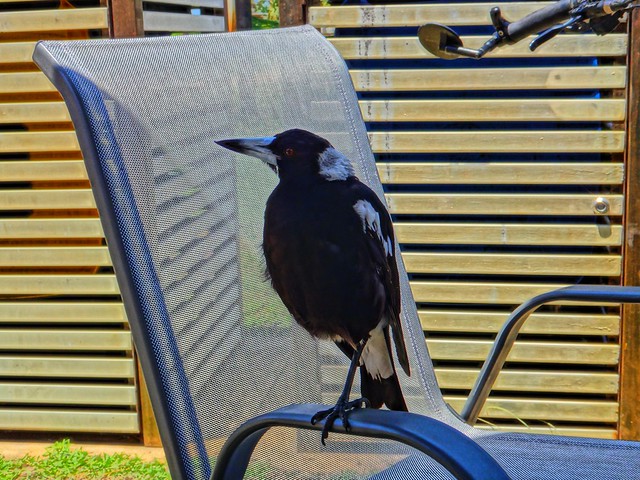 This local magpie thought the cafes were pretty good too, as he waited patiently for my BLT sandwich and coffee to arrive. 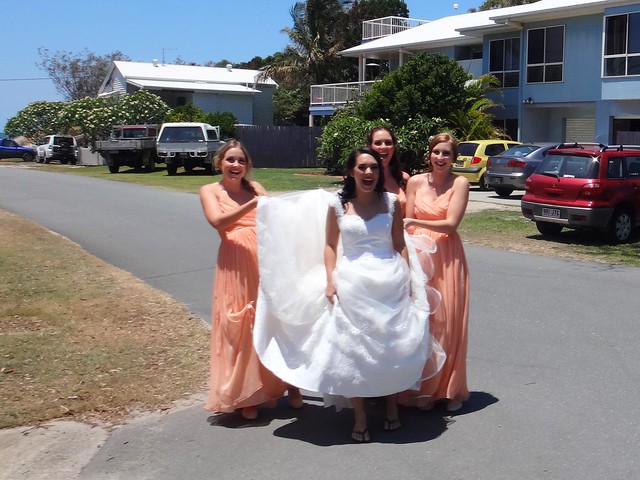 Before making my way back I did a lazy circuit of Woorim.

“Looking gorgeous, Ladies” I yelled out to this bridal party as I rode past. The women enthusiastically waved back, even the bride in her “non-bridal” footwear. They do look gorgeous, don’t they?

It’s at times like this I’m glad I always keep a camera in my back pocket whilst riding. 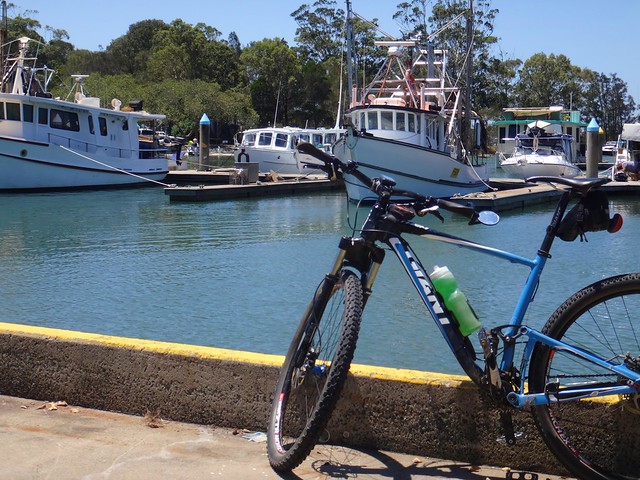 Stopping briefly at Spinnaker Sound marina on the other side of the bridge, I thought how much more fun my bike-owning experience was compared to my boat-owning experience. (My last boat sank in 2007) 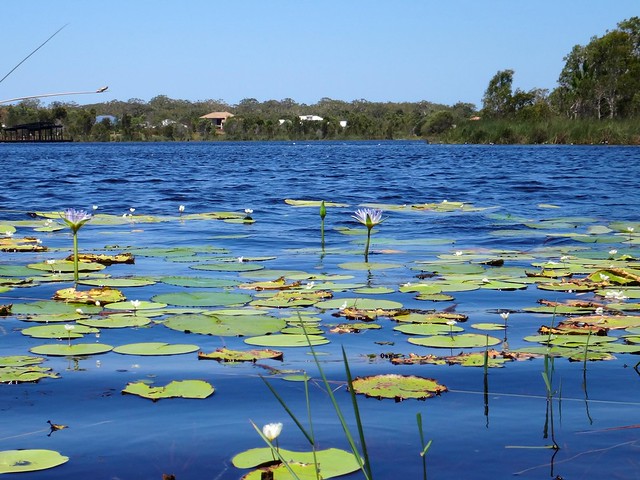 Before completing the final stretch back to Ningi, I meandered around the back streets of a new housing estate, enjoying some hidden tracks and a new artificial lake. “Bloody lovely” I muttered to myself as I squatted down at impossible angles to get photos of water lillies. 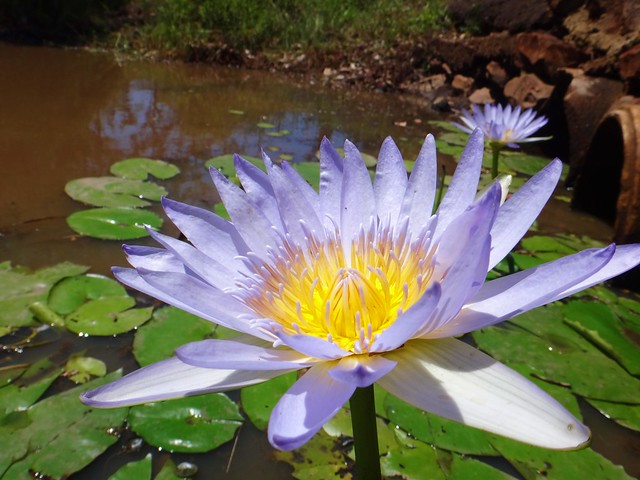 This is a very easy, low risk, cruisy ride – perfect for a family afternoon out (if you exclude the dirt tracks near Bongaree). I might bring Liz and the kids back here one afternoon.