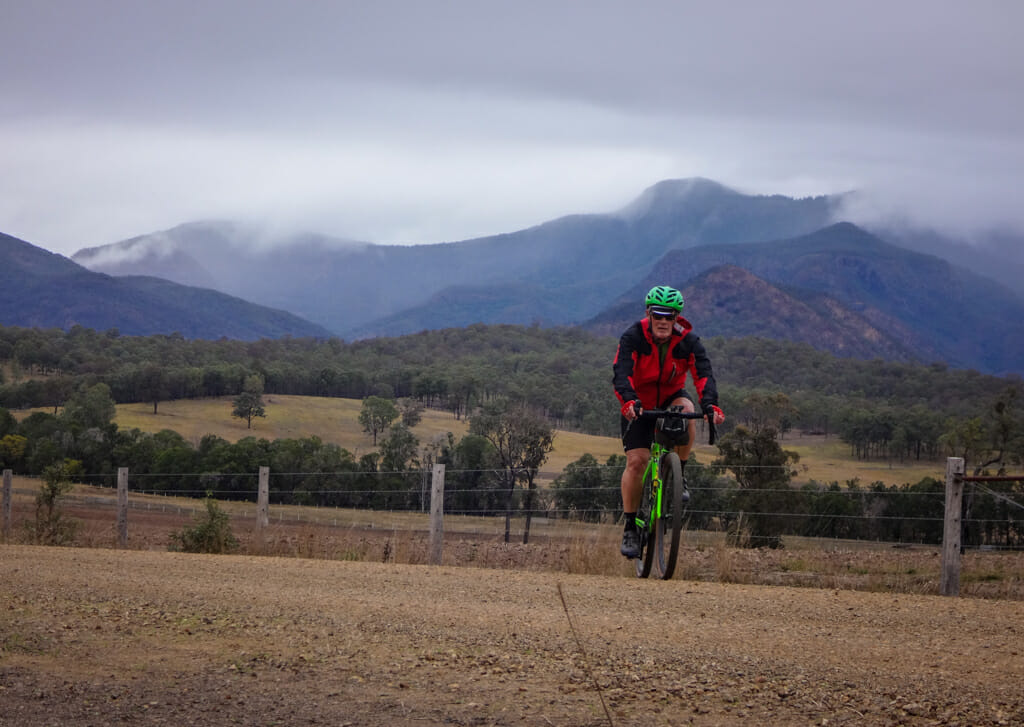 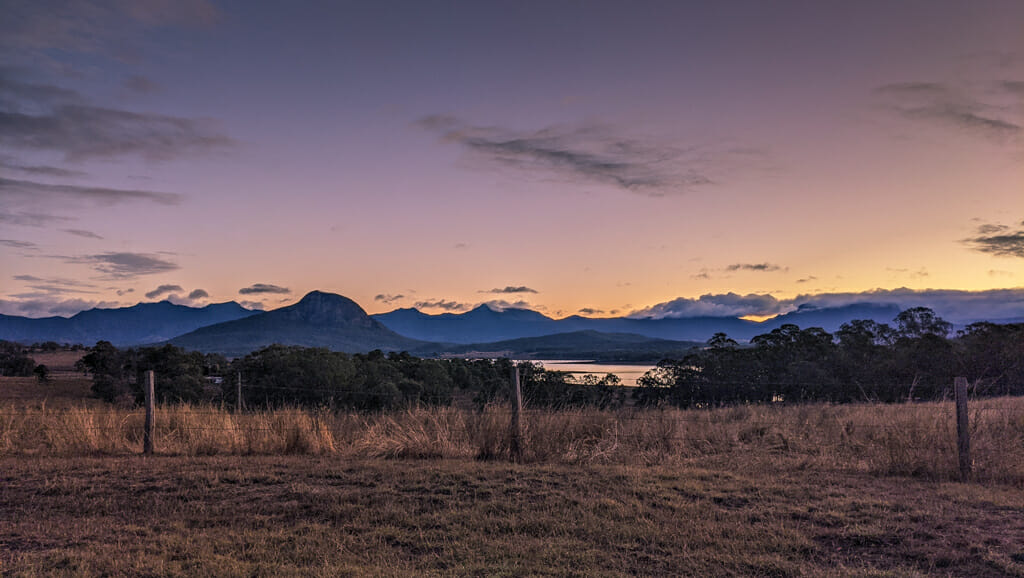 We stayed the night before at Russel’s childhood home – an old farm near the shore of Lake Moogerah.

While we sat in the back yard, the sky transformed through a stunning palette of colours as the day drew to a close.

We drank a few beers and had dinner together, while a fire kept us warm.

What a perfect way to start the weekend! 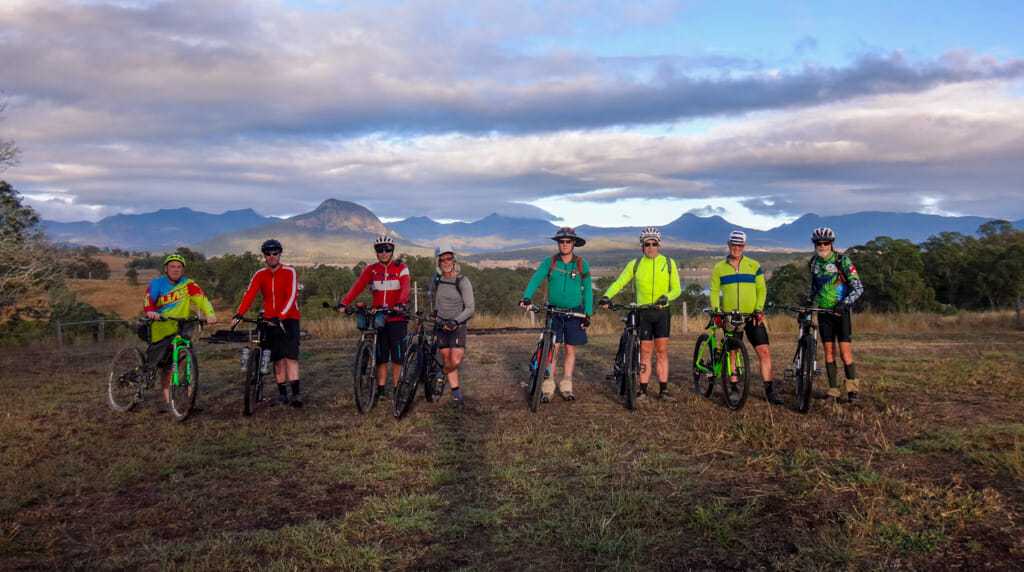 The “Dirty Boonah” is an annual long-distance ride designed by Justin Bennett as part of the Audax Australia long-distance cycling club.

Dozens of riders planned to participate on Sunday, so Justin asked a few of us if we’d like to check out the course the day before, to make sure there were no unexpected problems.

Russel was injured, and had kindly offered to be a support driver for the ride, in case any of us felt like we couldn’t finish and needed a lift back. 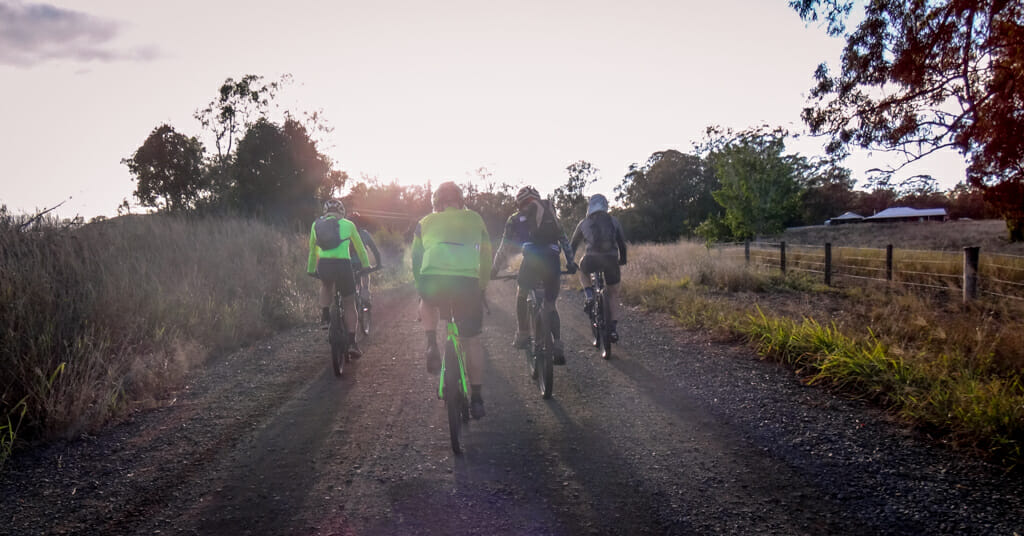 We set off up Tunstall Road while the sun was still low in the sky.

The forecast was for a cool damp day – perfect for a long ride. 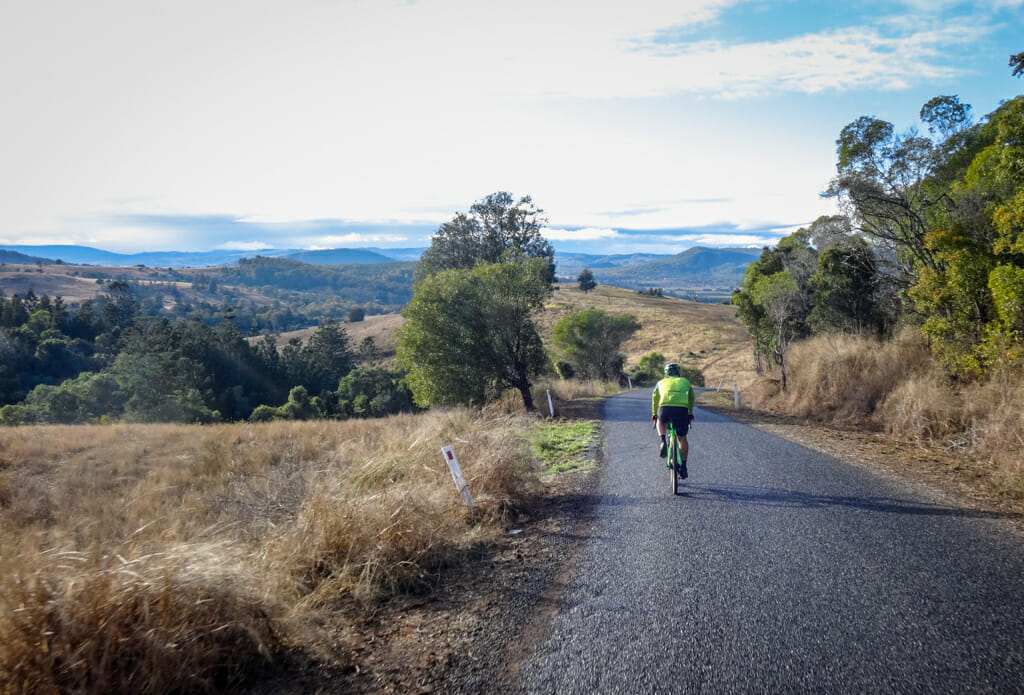 Mist filled the hollows and valleys below us as we coasted down the hill towards Mount Alford. 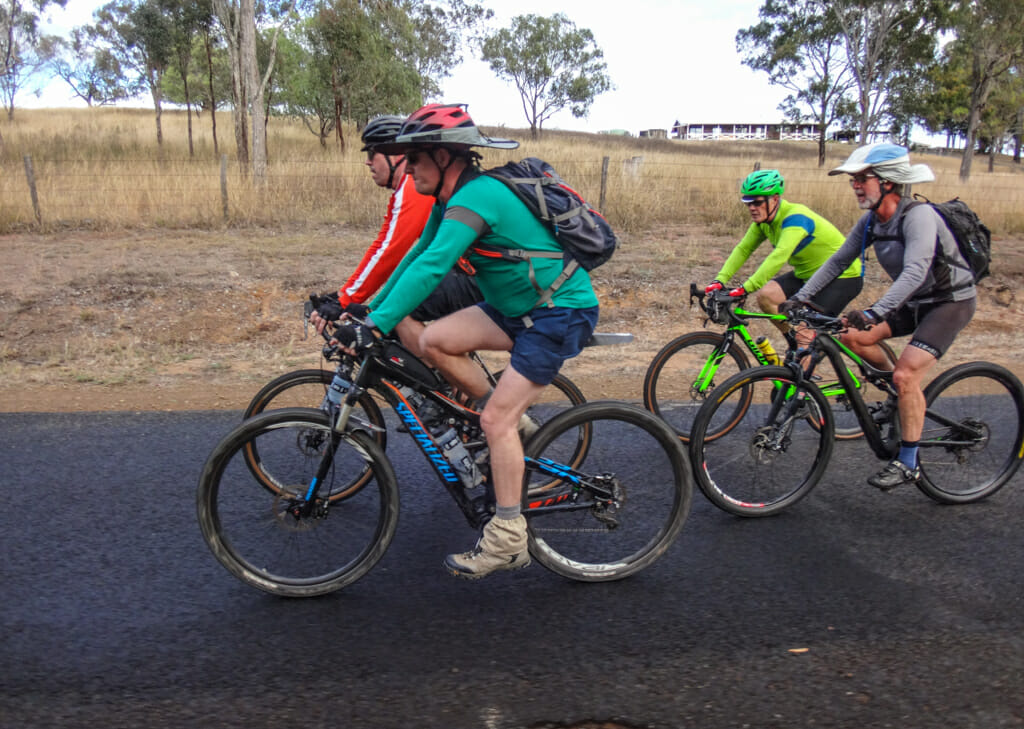 Justin’s Sunday course started in Boonah and had three options – a short 50km loop; a longer 100km ride; and a huge 160km epic for the ninja’s.

Today we took poetic license with his course, chopped a few bits off, altered the starting point and ended up with a 90km version that seemed do-able for most of us.

Justin didn’t mind.  It takes a special type of person to ride 160km.  I’m not that special 🙂 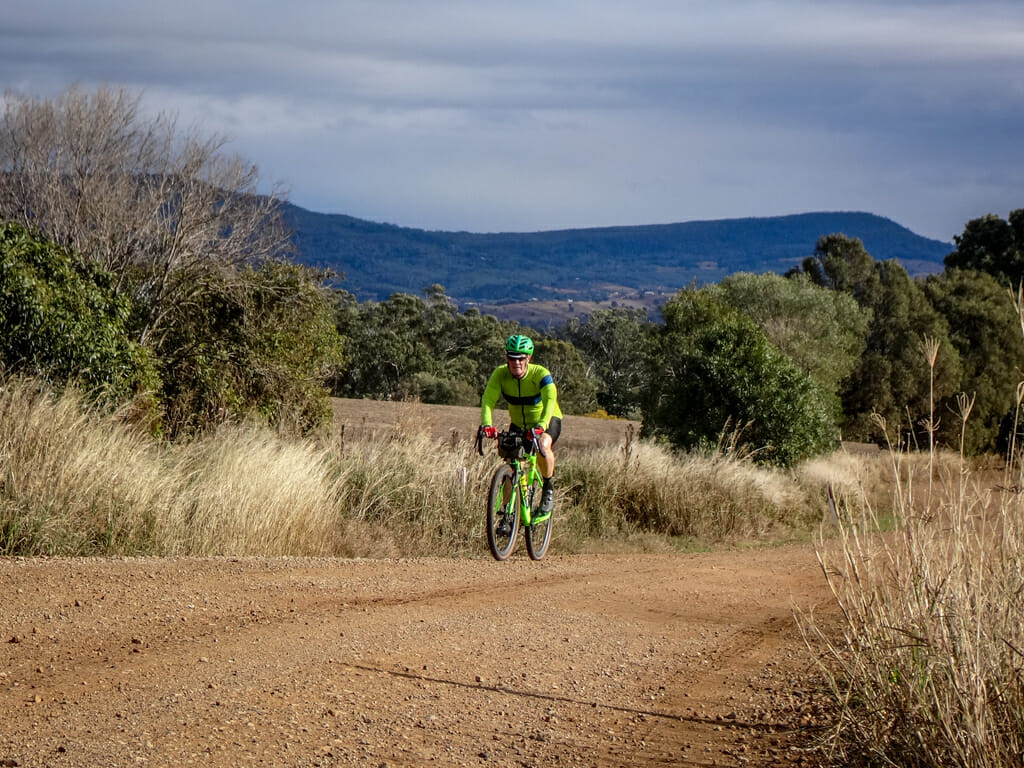 Bunburra Road is pretty with lots of rolling hills.

The ups and downs spread our group out over a couple of kilometres. 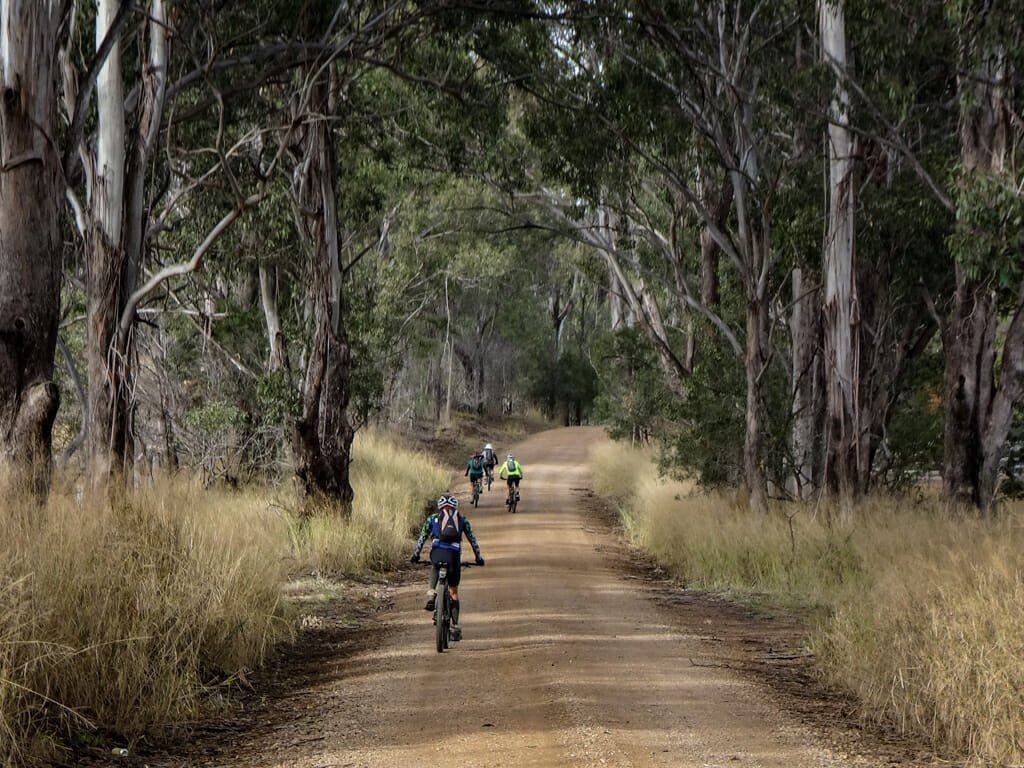 At Cannon Creek we headed south along a secluded gravel road. 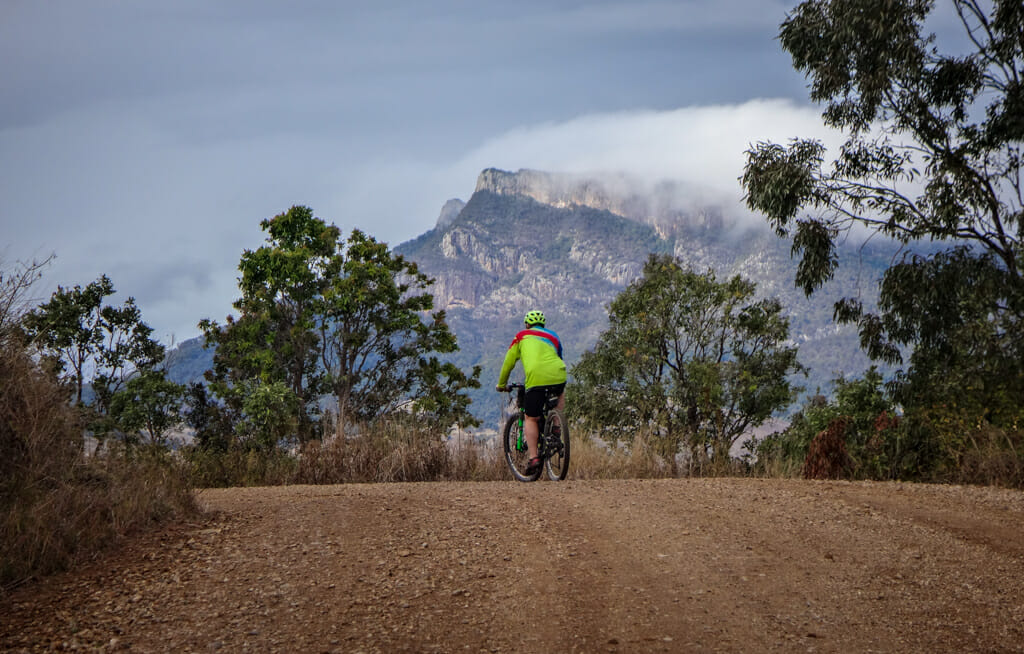 Clouds swirled over Mount Maroon as we crested another hill. 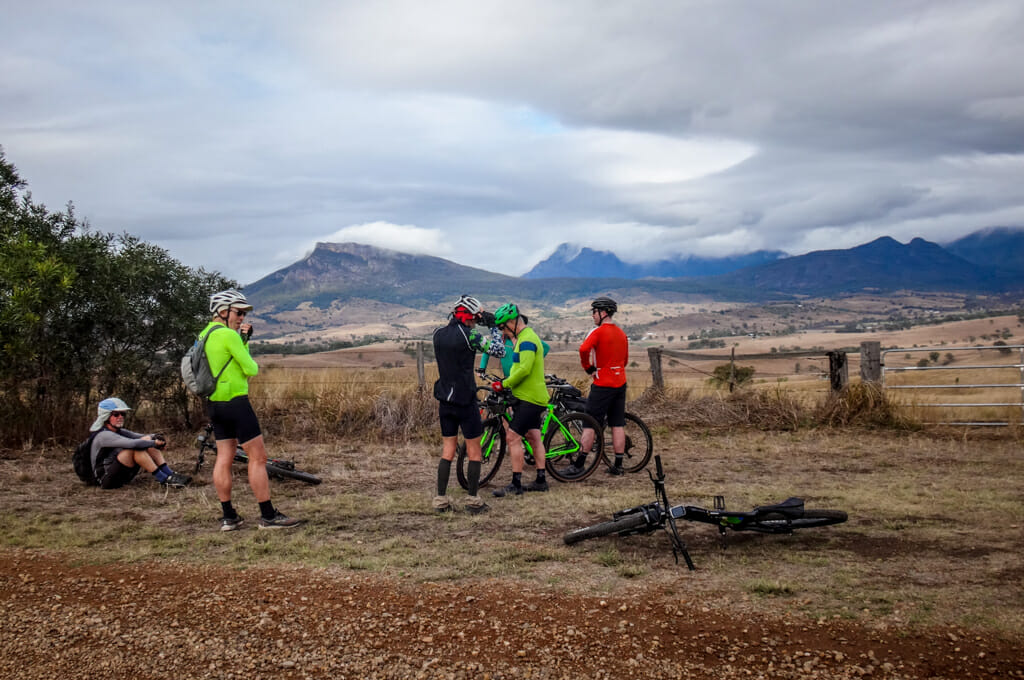 The faster riders waited for the rest of us at the top. 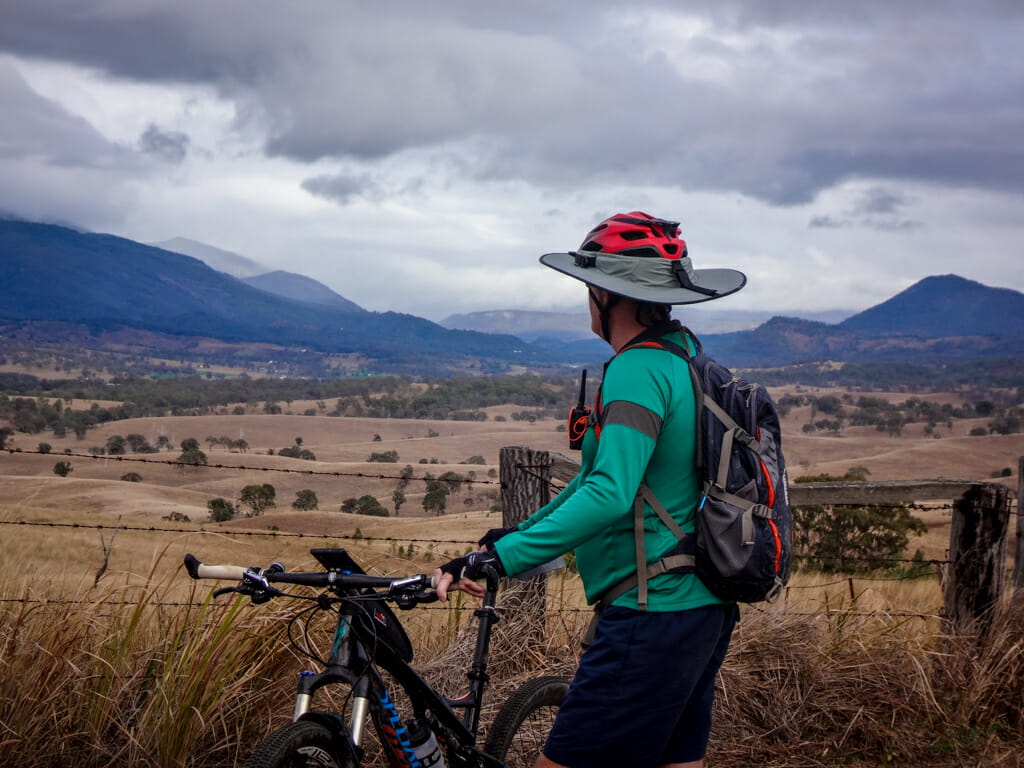 It’s at places like this that I realize why this place is called “The Scenic Rim”.

It’s beautiful – even on a cold cloudy day. 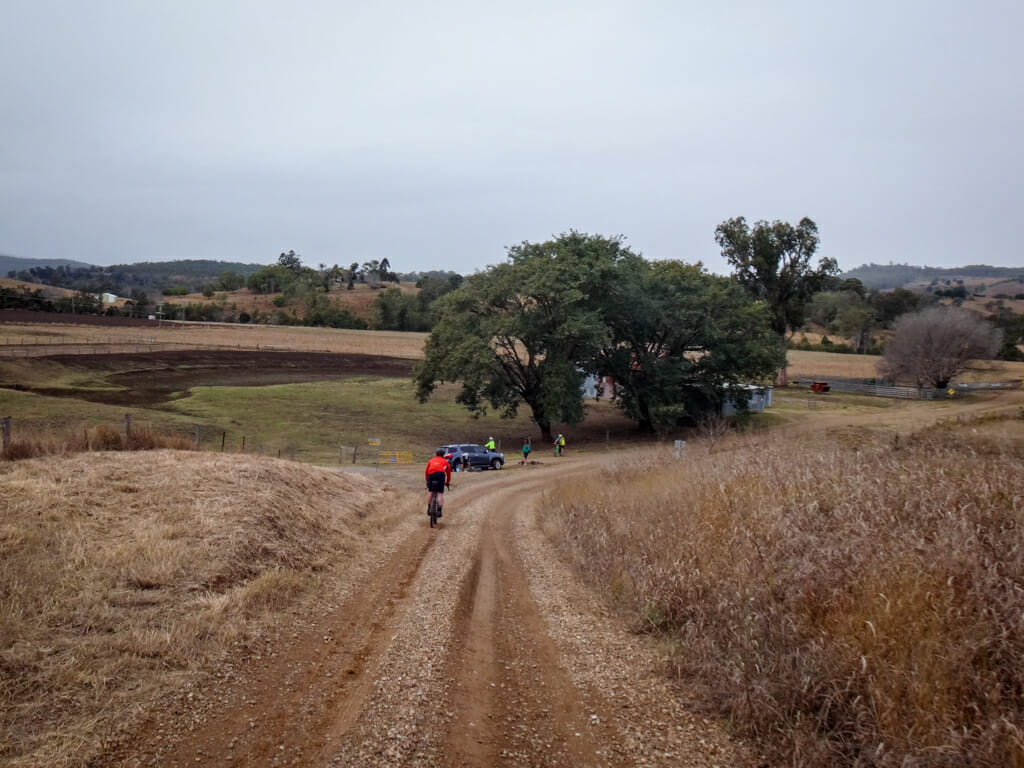 Russel met us in his car at the bottom of the hill with some spare water and fruit.  Thanks Russel!

I found a spot in the grass near the car and rested for a while.  Rain fell gently, but it wasn’t uncomfortable.

In the hundreds of rides we’ve done over the years, I can’t remember cancelling a single ride because of the weather.

“Just turning up regardless” has worked out well for us – although we have got wet a few times. 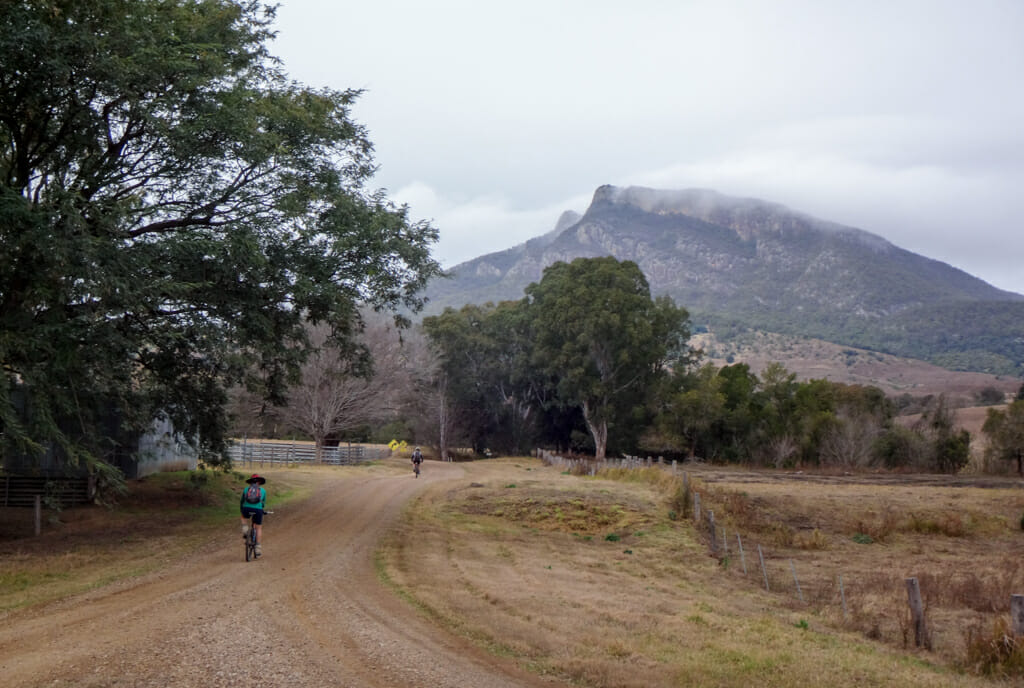 It was getting cool, so I zipped up my jacket, got back on the bike and started riding again. 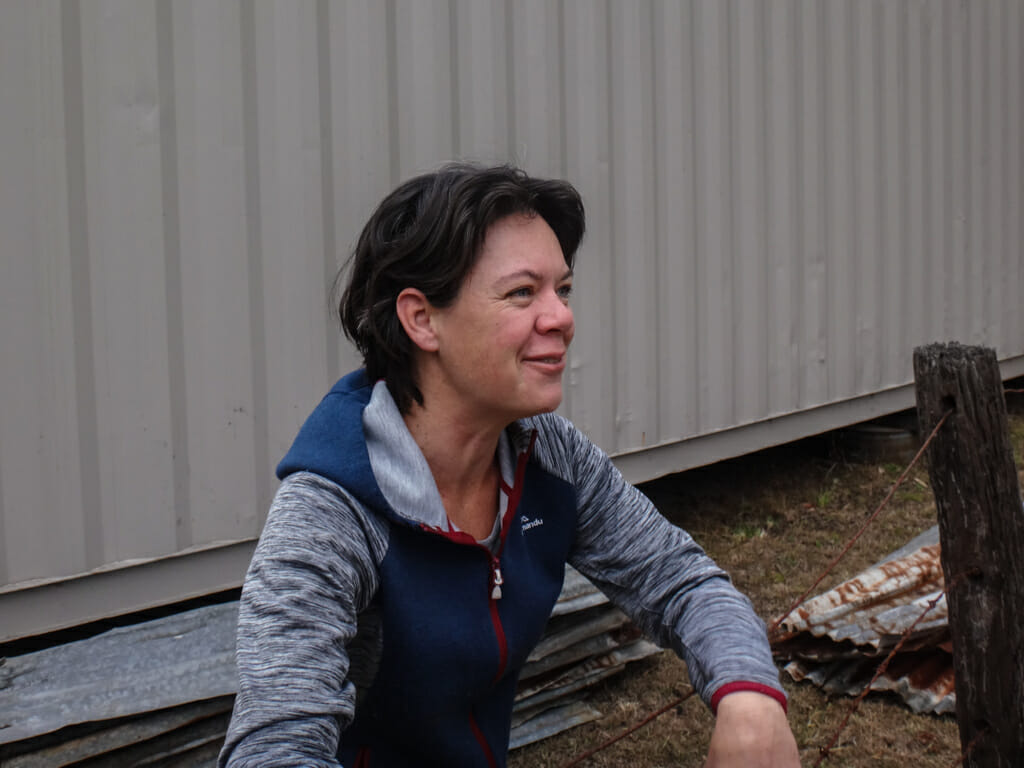 Just after Maroon school a woman called out to us over her front Fence.

Sharon has a small rural block with some chickens and happy dogs.  The dogs bounded about like mischievous kids while we chatted.

She was worried about her neighbor up the road.  He had a few cattle loose on the road a few days earlier, and passing cyclists had made the problem worse by not being aware of the problem.  She wanted to make sure we understood what was going on.

We promised Sharon we’d keep an eye out for any stray cattle. 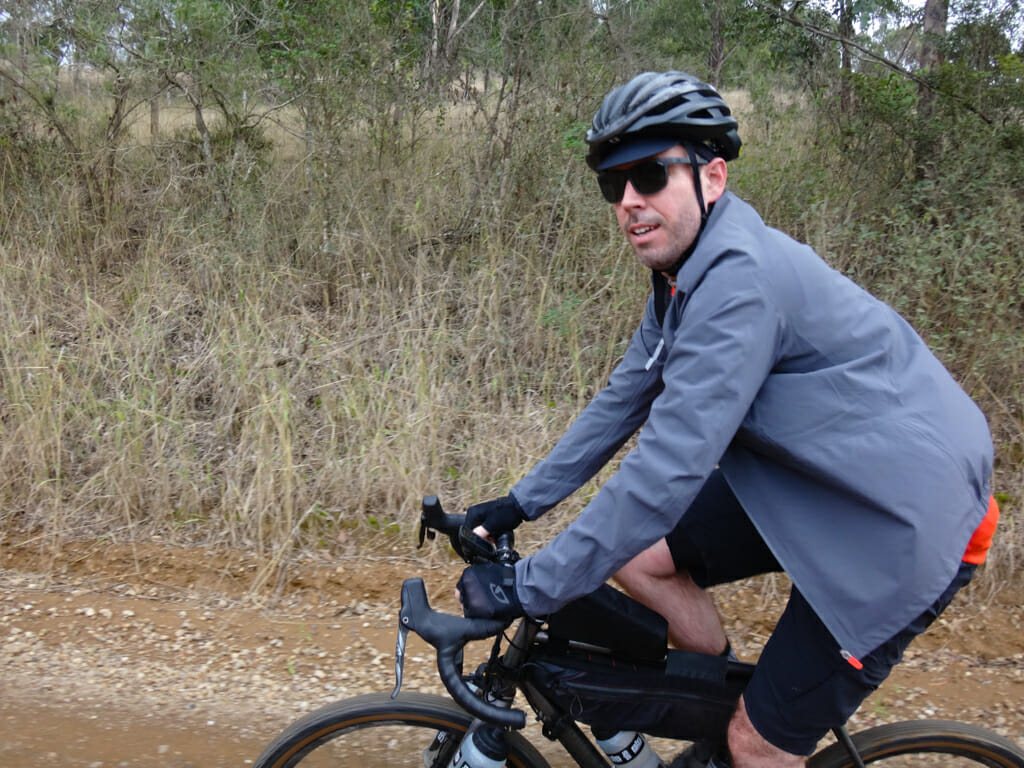 I had fallen behind most of the other riders, but Justin slowed down and rode with me.

Long rides are more fun when you’re not playing catch-up. 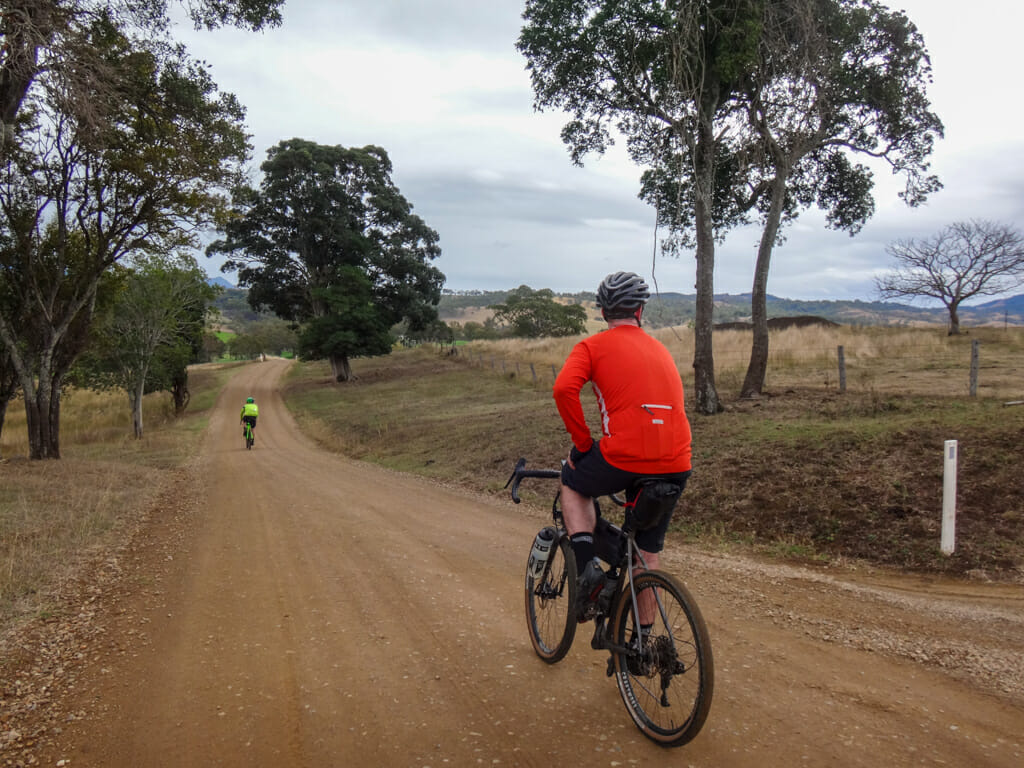 Justin told me he thought the next ten kilometres would be the toughest part of the ride. 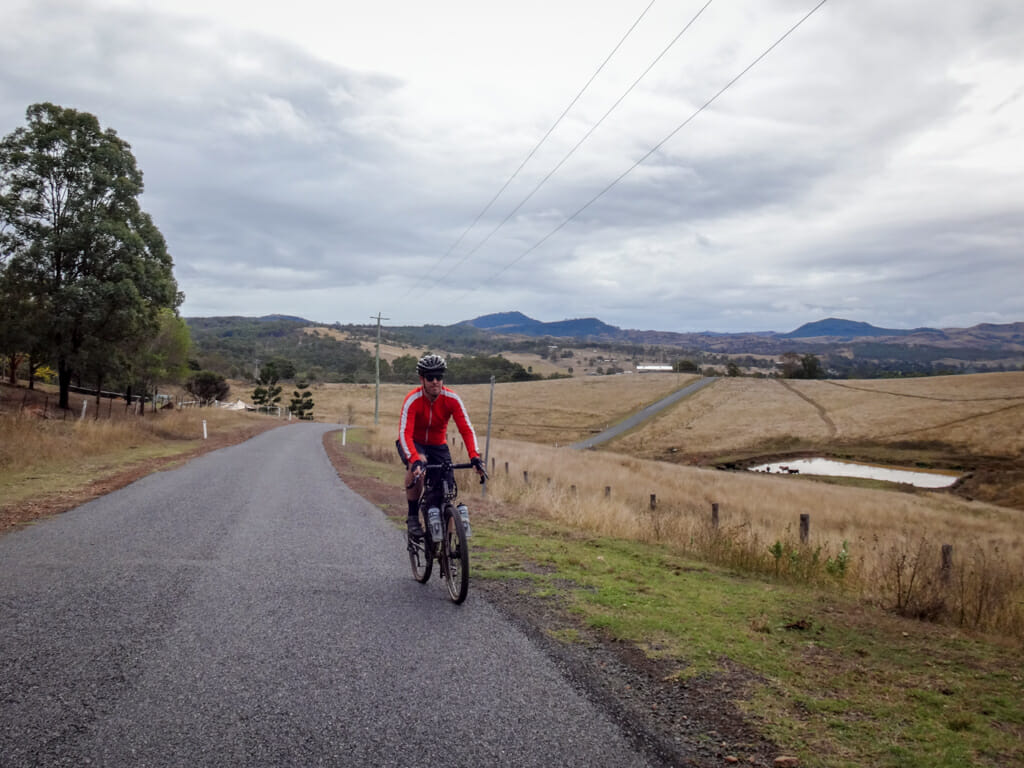 He was right.  Burnett Creek Road went up and down, and was rarely ever flat. 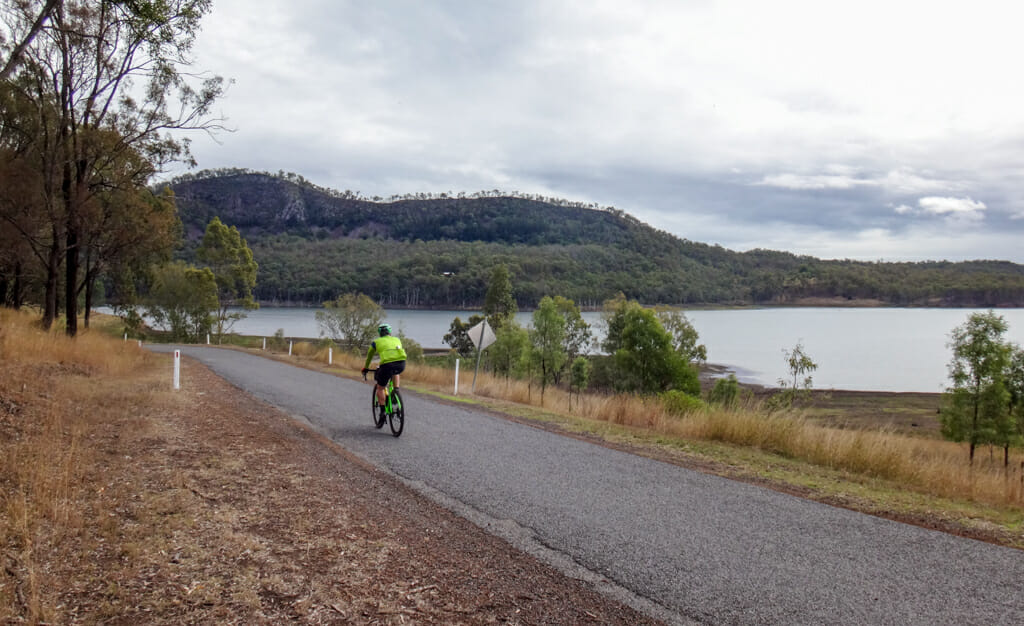 Despite the hard work, the views were pleasant. 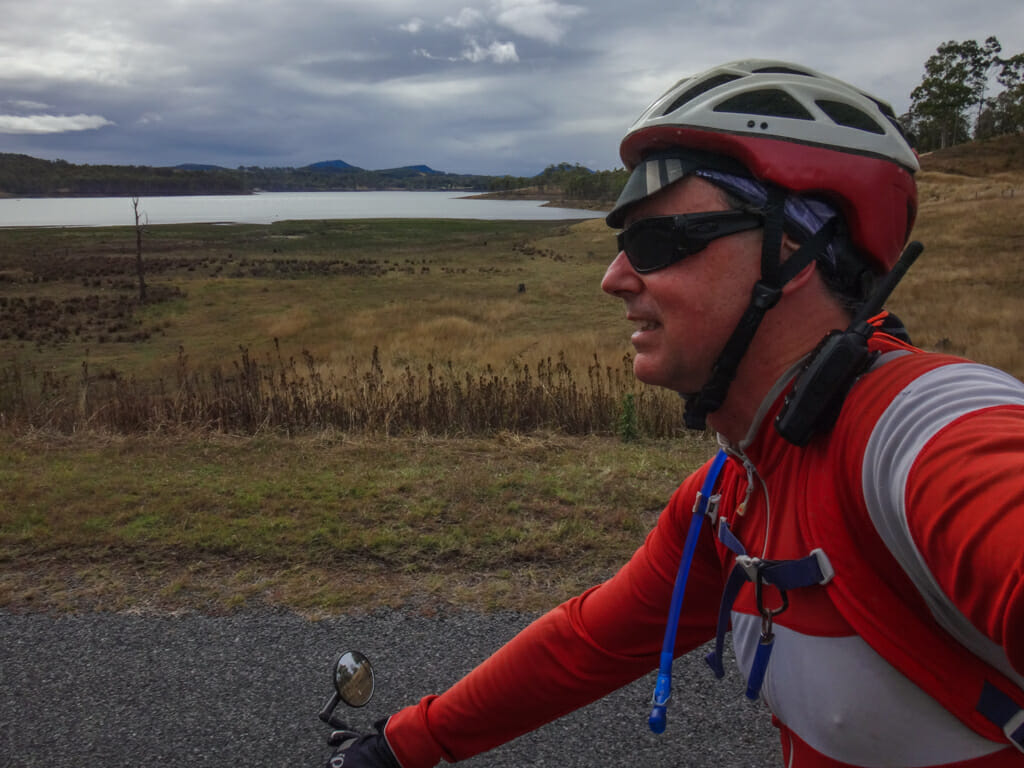 We followed the southern shoreline of Lake Maroon for a few kilometres. 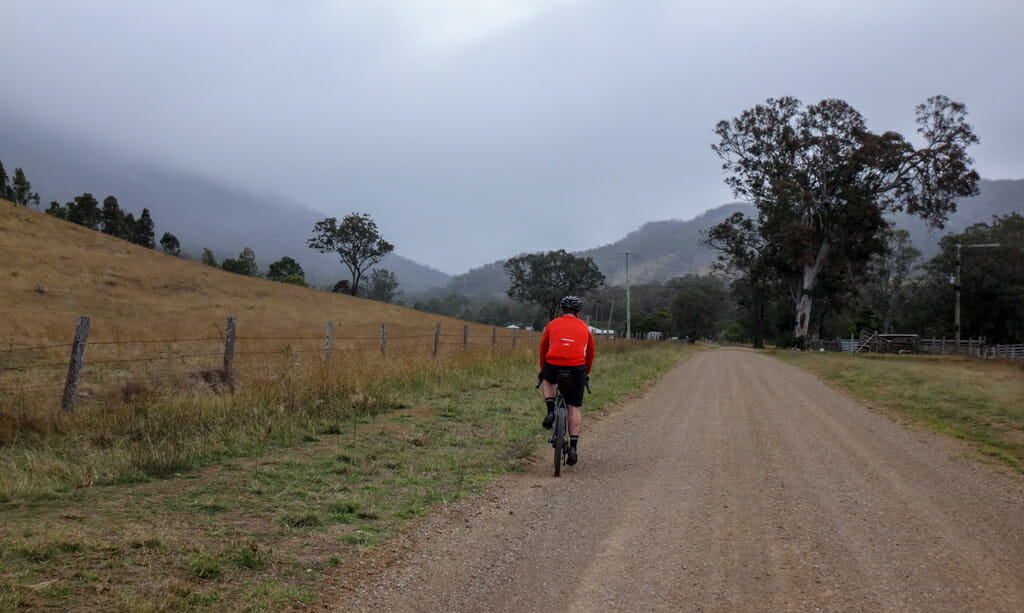 “It looks like the rain is getting closer,” I commented to Justin.

I wondered if we’d outrun it.

We turned right at Fletcher Road and began a long slow grind up the hill.

Justin got off and walked the bike with me a while.  Behind us, the clouds started rolling in.

Although it’s hard work, the views from Fletcher Road are stunning.  With the worst part behind me, I jumped back in the saddle, and continued slowly grinding the pedals upward. 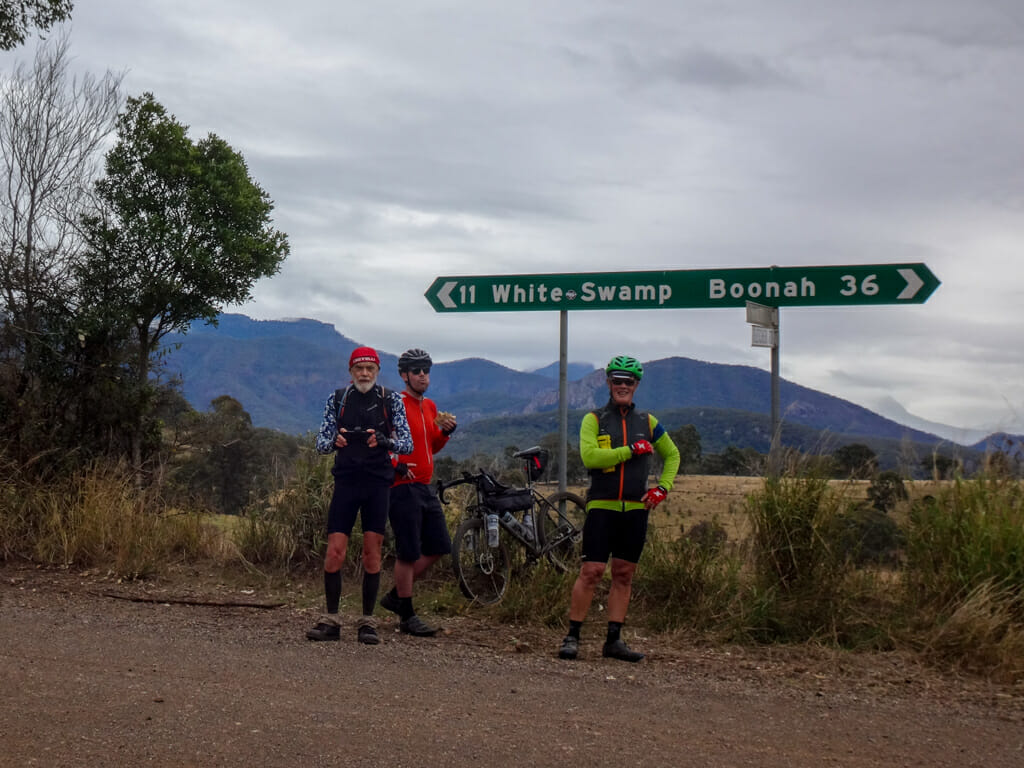 My friends were waiting for me at the top.

Carney’s Creek Road marked the highest point of the ride.  It was mostly downhill from here.

Before starting the descent, I took a quick break.

“I’m just going to have a sit down and a little cry” I said to my mates jokingly, and hungrily tore open a pack of sandwiches I’d prepared beforehand.. 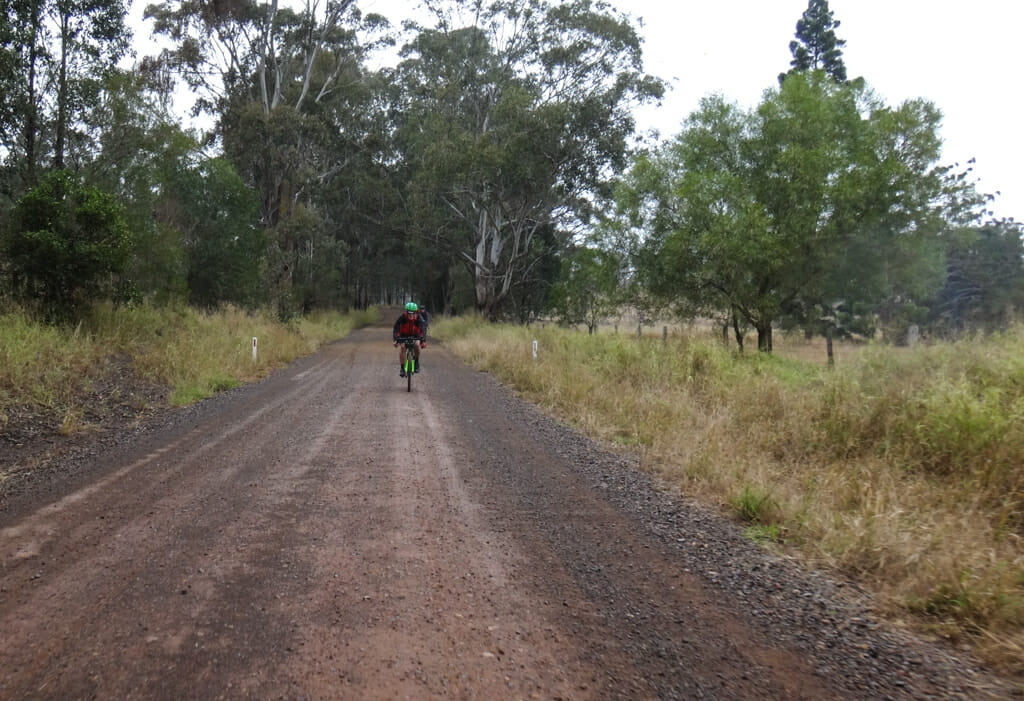 Normally you can enjoy a stunning panorama as you ride down Carneys Creek Road.  The light rain reduced our visibility today.  I zipped up my jacket and enjoyed a few kilometres of easy pedaling as I coasted downhill in the cool damp breeze. 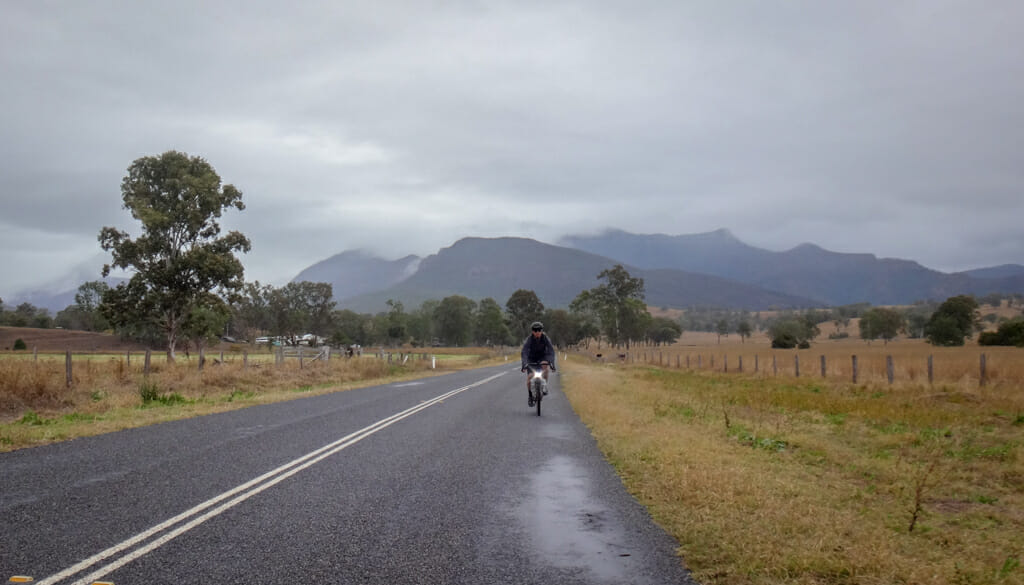 We met Russel in the support vehicle after we reached the paved road.  I told him I was feeling tired and might eventually need a lift.

He suggested I ride on a bit, and he’d catch up to me after he had retrieved a container from a water drop. 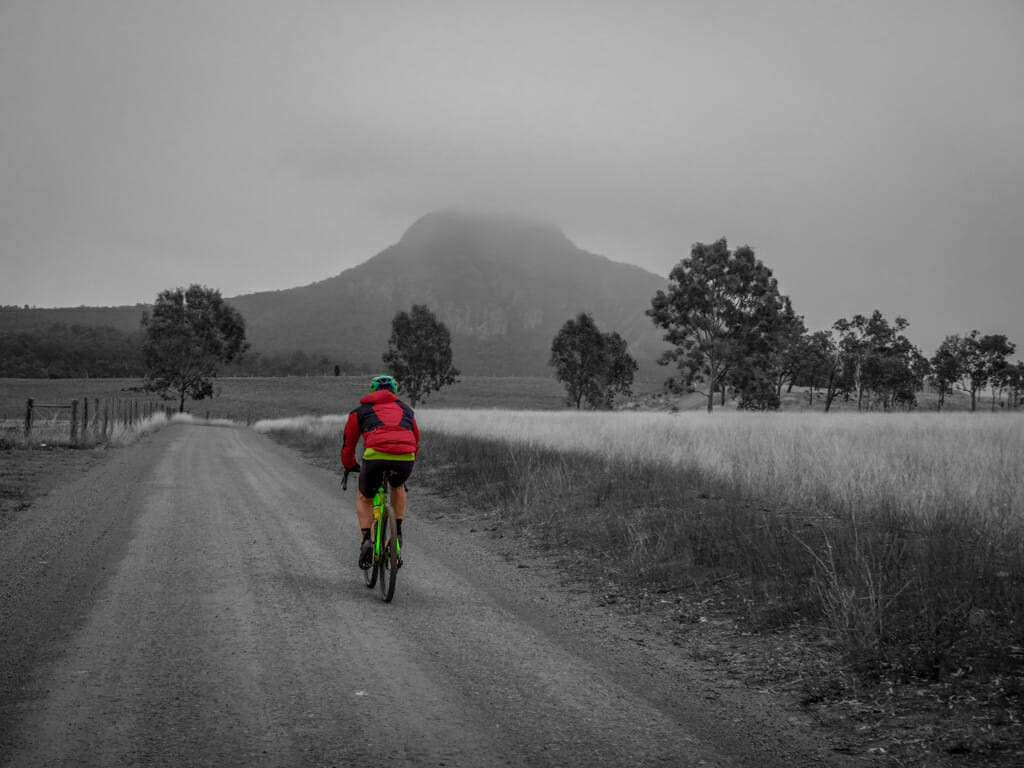 We turned into Croftby Road and pointed the bikes back towards Moogerah.

Open Eucalyptus forest alternated with rolling pastures on either side of this picturesque road.  On our left, the Great Divide formed an impenetrable wall.  To our right lay Mount Moon.  Ahead lay Mount Greville, shrouded in cloud. 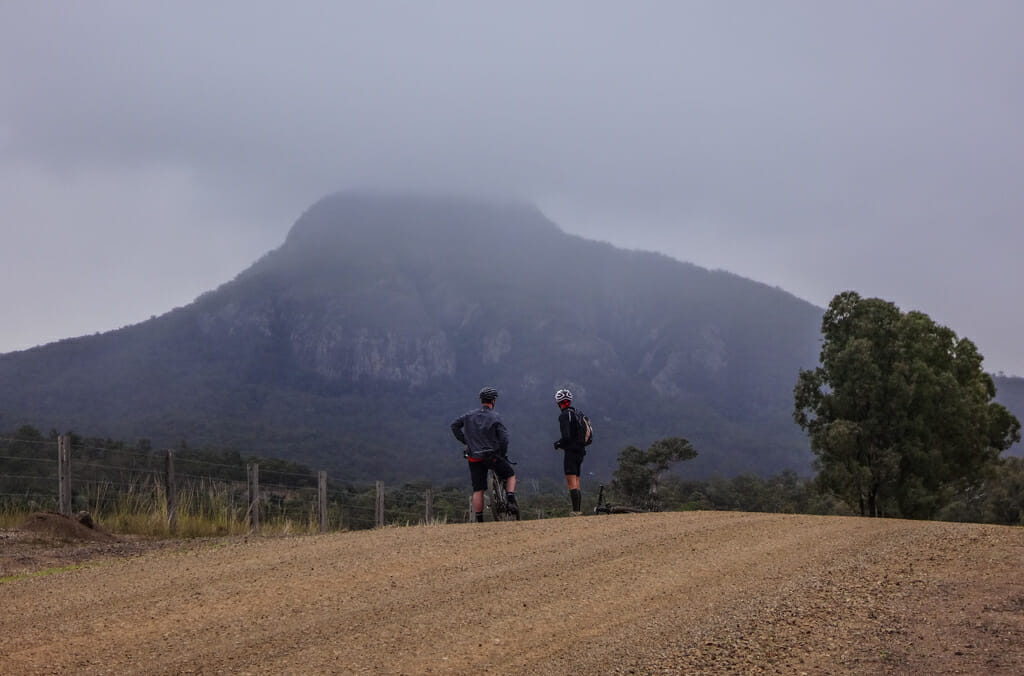 I rolled past Justin and Calum.

“I’m going to keep moving,” I said, aware that Russel might be just behind me in the car.  I didn’t want him to catch me just yet.  This was too much fun.

As it turned out, he didn’t catch me until I was about five kilometres from the end.

We rode about ninety kilometres in seven hours.  During that time we climbed about 1,750 metres and I burned about 5,000 kcal.

This was a tough ride.  I’ll rate it 9 out of 10 on the tough-o-meter.  In summer this would rate a solid ten on my scale – I wouldn’t attempt it.

Thanks Justin, Simon, Eric, Adam, Craig, Pete and Calum for a fun day out.

Thanks also to Russel for your cheerful hospitality, and for supporting us on the ride. 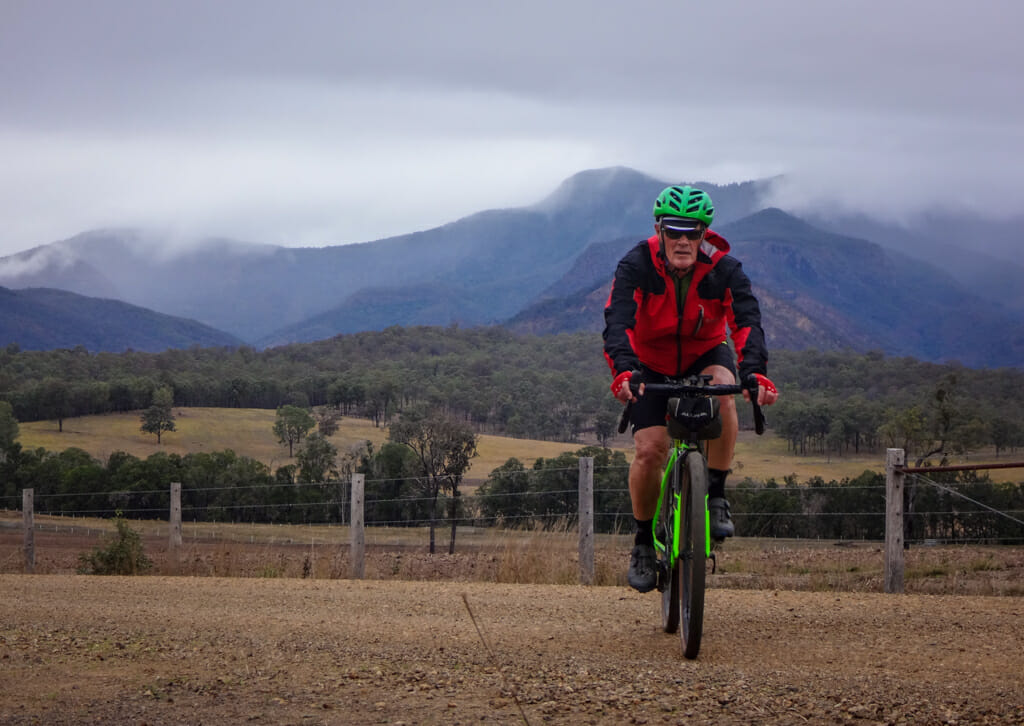