Even though most of the trails were pretty soggy from all the recent rain, they were still fun to ride. The Dularcha Railway Tunnel was built in 1890 as part of the original Brisbane – Cairns railway line. A newer, flatter route was built in 1931, when this particular section of the line was abandoned. It’s now part of the Dularcha National Park which contains beautiful rainforest. At the end of the ride we met a beautiful goanna who let us get pretty close to take photos, but started hissing loudly at us to let us know he didn’t like us crowding him too much.

If you ever drive into the Pine Rivers district and look west, the chances are you’ll see a pyramid-shaped mountain on the horizon. You can’t miss it. The 18th century English navigators didn’t miss it – they drew it on their sketches of the area. And the chances are if you read this blog you’ve already seen it in some of my photos: 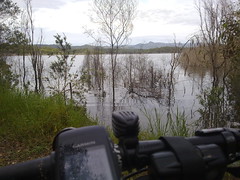 A week or so ago I decided I’d like to climb it, but I wanted to take my bike as far as I could up the mountain. It’s a tough climb for hikers, so when I told my plans to my dear long-suffering wife, she gave me a look which gave no doubts that I should ask some friends to come as well in case anything went wrong.

So I asked on the excellent local mountain biking website MTBDirt.com.au for some riding buddies. “You have to be crazy to do this ride”, I said. “I’ve never done it before, I don’t know if it’s rideable, it will be wet and muddy. If you’ve got any doubts, don’t come”. So seven other guys turned up this morning for the ride. I was stoked 🙂

We had permission from the local land owner who let us ride through their property up to the national park. (Thanks Gab & Shirley – we love you!). But when we got there, we took a wrong turn and ended up bashing through a few hundred metres of lantana before we’d even really started: Eventually, we found the fire trail, and half-rode, half dragged our bikes up the hill: We eventually made it to the 500m line which marks a saddle between the lesser peak to the north, and the imposing pyramid of Mount Samson. It’s at this point that Hang Gliders used to jump off and glide into the valley below. The views, even at this point, were spectacular – despite all the clouds and rain in the area: We pushed on and eventually reached a thick bunch of lantana that was impenetrable. There was no way we could drag the bikes any further, and as we tried to push through it, the horrible weed cut us and made any further progress impossible.

So we did what any fun-loving mountain bikers would do, turned the bikes around, and rolled down the hill. What a ride! About 450m of descent in 3 or 4 km. I crashed a couple of times as did others – but there was so much undergrowth that it was like landing on pillows. Also, while riding down we discovered the route we should have used coming up. It would have saved us some crazy hiking at the start and maybe saved us half an hour.

But it was a great ride with some really fun, fit, and slightly crazy guys. I’d love to try it again once I have a better idea of where to go when we reach the saddle at the top. I thought I’d take the boys for a ride around some of the locally flooded creeks.

Here’s some photos of them having fun. Sheep Station Creek is a 231 hectare environmental reserve about 6km south-west of Caboolture.

The dense eucalyptus forest is very popular with horse riders, but today I explored it on the MTB with a couple of friends.

With all the rain we’ve been experiencing, it’s very difficult to find off-road places that are rideable. The gravel trails here hold up well in the wet – but we still managed to get covered in mud.

Historically, Sheep Station Creek is important because it contains many scarred trees which may be of Aboriginal origin, and it contains the remnants of the original road between Brisbane and Gympie that Tom Petrie helped blaze in the mid 19th century.

Looking at the dense forest and muddy trails, I am stumped as to how anyone would have driven a horse and cart through there!

This is definitely a place I’d like to explore more in drier weather!

Many thanks to friends Tim and Michael for introducing me to this lovely place!

“When Davis (or ” Duramboi “) was asked to mark a road
to Gympie, he sought my father’s assistance for the first part
of the way, saying he would know where he was all right
when he got to the Glass House Mountains, as he had been
there before when living with the blacks. So Father took
him to the other side of Caboolture and put him and party
on his (” Tom ” Petrie’s) marked tree line to Petrie’s Creek,
on the Maroochy River. Then when the Kne to Gympie
was marked, he went with Cobb and Co. to help them pick
out stopping places for the changing of horses. . The road
was just frightful at that time ; we in these days could not
recognize it for the same.”

This little fellow and his friends visit our place regularly. Sometimes before I can drive up the driveway, I have to get out of the car and shoo them out of the way.

This afternoon he was checking us out, so I snuck up on him with Liz’s camera and took a few shots.

Liz’s camera is much easier to take good photos with than my mobile phone! Several weeks ago I rode out to the source of the North Pine River in the D’Aguilar Ranges. Today I thought I’d have a look at the other end of this beautiful river, near where it meets the South Pine River, and the sea.

Part of the trip was through John Oxley Reserve, where Oxley first set foot in our region in 1823. There are some well kept trails through the reserve which lead down to the river, and then eventually further downstream to Acacia Park.

There’s a small amount of single trail in Acacia Park and great views of the river. The confluence of the North Pine and South Pine Rivers as seen from Acacia Park, Murrumba Downs

Dohle’s Rocks is near the mouth of the river. It’s quiet because the only way out is the way you came in – so it’s a cul-de-sac. The area is named after the Dohle family who first settled there, and whose kids used to row across the river most mornings to get to school. As you can see it’s quite idyllic late in the afternoon.

It’s rides like this that remind me how fortunate our family is to live where we do!

The excessive rain around here means that there aren’t many dirt trails we can ride at the moment without getting bogged in mud. Harrison and I had a look at some of the flooded creeks in the area, but were particularly impressed with all the flood water in Sideling Creek. I normally ride the bike across a few rocks over Sideling Creek below the Dam that forms lake Kurwongbah. But today, there was no chance of riding across this creek. It was once the physical western boundary of Tom Petrie’s “Murrumba” property after he purchased if from the Griffins in 1858. It was definitely a physical boundary today! One of the Glasshouse Mountains. The rain stopped for a few seconds, and I thought I’d grab the chance while I could, despite the pesky power lines 🙂

The legend of Coonowrin is as old as humanity. In the Dream-time, Tibrogargan needed to rescue his wife, Beerwah from a flooded creek. He asked his son, Coonowrin for help, but Coonowrin was cowardly and didn’t help his father.

In a rage, Tibrogargan struck his son, and broke his neck. Tibrogargan is now stone, and stands facing the sea to the east to this day, with his back to the son who disappointed him.

Beerwah is now stone too, but she forgave her son and faces him.

Coonowrin is now stone, too. And as you can see from this picture, his broken neck is still visible – testament to fiery emotions that can exist between parents and children in times of crisis.

The incident caused many tears, which is why there are so many small streams in the area.