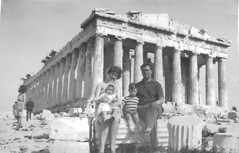 Ellinis stopped in Piraeus, Greece on her way from Southampton to Brisbane.

We stopped at a few Ports. Piraeus, we visited the Acropolis which was amazing. It was the first time I had tasted Calamari. We then travelled through the Suez Canal, it was so hot. Some small boats came along side the ship, Bruce said they were called “bum boats”. The men that paddled these boats were Egyptians who were trying to sell their wares to the passengers. They would call up “hey Mactavish” they called everyone by Scottish names. The next stop was Port Said where we walked around the docks for a short while; Bruce was asked if he wanted to buy a wife! Of course he declined, showing me in all my glory along with two children! We made a quick retreat and returned to the ship. The next port was Aden, we stopped there for a few hours. This was very interesting; we visited the markets and also bought a camera. Most of the time travelling to these different places we were just amazed at all the different sights.

When we left Aden we were at sea for about 1 week, it was at the end of this week that Neil & I saw the dolphins! He was very excited but wasn’t too sure what they were.

Incidentally, once of my earliest childhood memories is looking over the side of the ship, seeing people coming alongside in small boats to sell things. Someone would pass a container down on a rope, the people in the boats would put merchandise in it, and the passengers would take what they wanted and leave money in the container.

When mum mentions Port Said above, I think it was actually Suez. Port Said is at the start of the Suez canal when you’re heading south, and Suez is at the southern end. That bit of knowledge might come in handy if anyone is in the market for buying an Egyptian wife 🙂