Last week Simon and I rode from Wamuran to Moorina along the historic Old North Road.

This week we wanted to complete the southern section of where we think the road went, between Kurwongbah and Moorina. 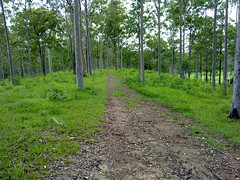 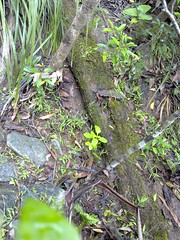 We started at Dunlop Lane then headed north along Smiths Road where it crosses Mosquito Creek. I looked around here for any traces of an old bridge but could find nothing except an old beam in one of the banks. 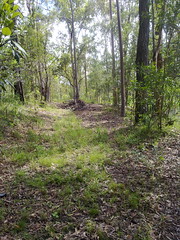 Merelyn very kindly let us look around her property which is on the southern end of historic Franz Road where it used to meet Alf Dobson Road. She showed us the remnants of the Old Road, with what I think are survey marks clearly chopped out of a dead tree near the road.

Merelyn has records of the road reserve being re-gazetted from it’s historic route past her front door, to a point along one of the boundaries of her farm.

The ground is heavily compacted showing evidence of frequent traffic at some time in the past.

Merelyn has had conversations with several old-timers who tell her cattle used to be driven southwards along the road prior to the early 20th century. 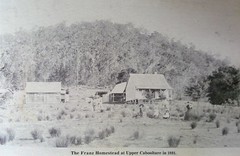 Cliff, Owen and Cathy very kindly let us ride through their farm trying to find any remnants of the road.

As Franz Road heads north, we tried to retrace the road by referencing an old survey plan by William Fryar in 1868.

These old trees are close to where Fryar’s plan showed trees that he used as reference markers for his pegs. Unfortunately the original trees are long gone.

I would have made a hopeless surveyor, and found it difficult to differentiate between what I thought were remnants of the old road, and more recent farm tracks.

Cathy showed us this old photo of the old Franz homestead near where we passed. 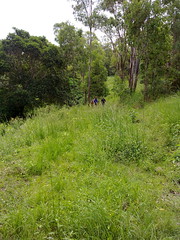 Judy and Ken kindly showed us the remnants of an old road passing through their property.

Judy tells me that the road was used by Cobb & Co in the 19th century.

It winds up a fairly steep hill, and in some places it’s possible to see evidence of past maintenance, including an old log bridge, and frequent large rocks lining the sides of the road.