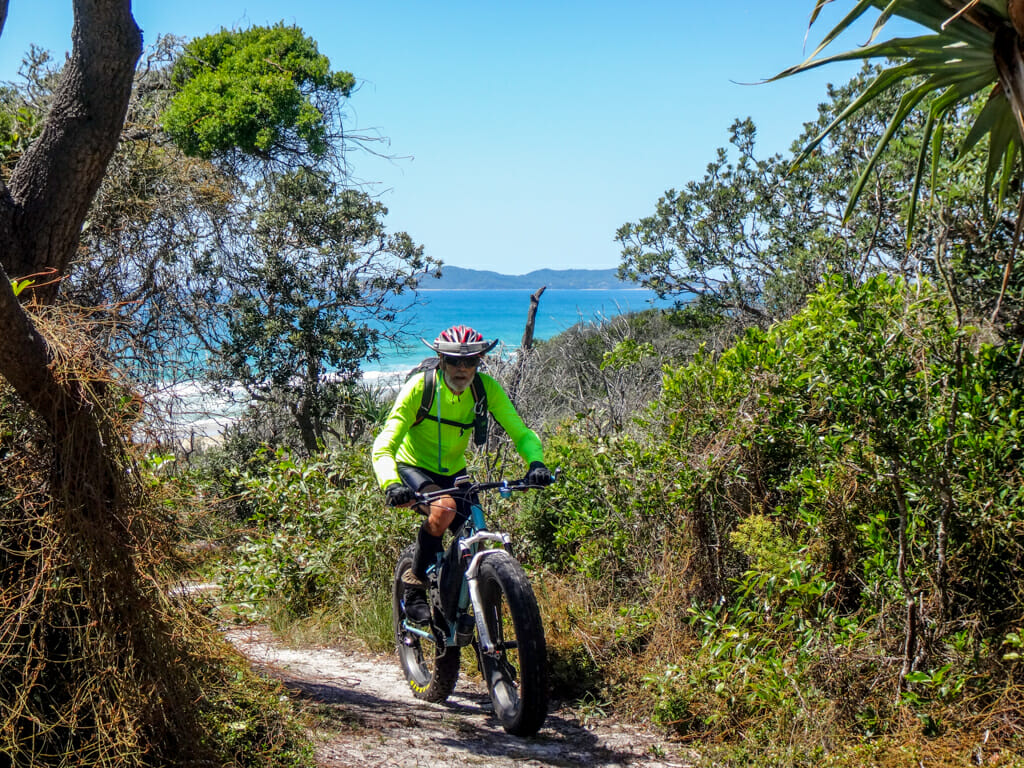 A short ferry ride over the Noosa River from Tewantin, there is a vast sandy wilderness next to the ocean, perfect for exploring on a fat bike. 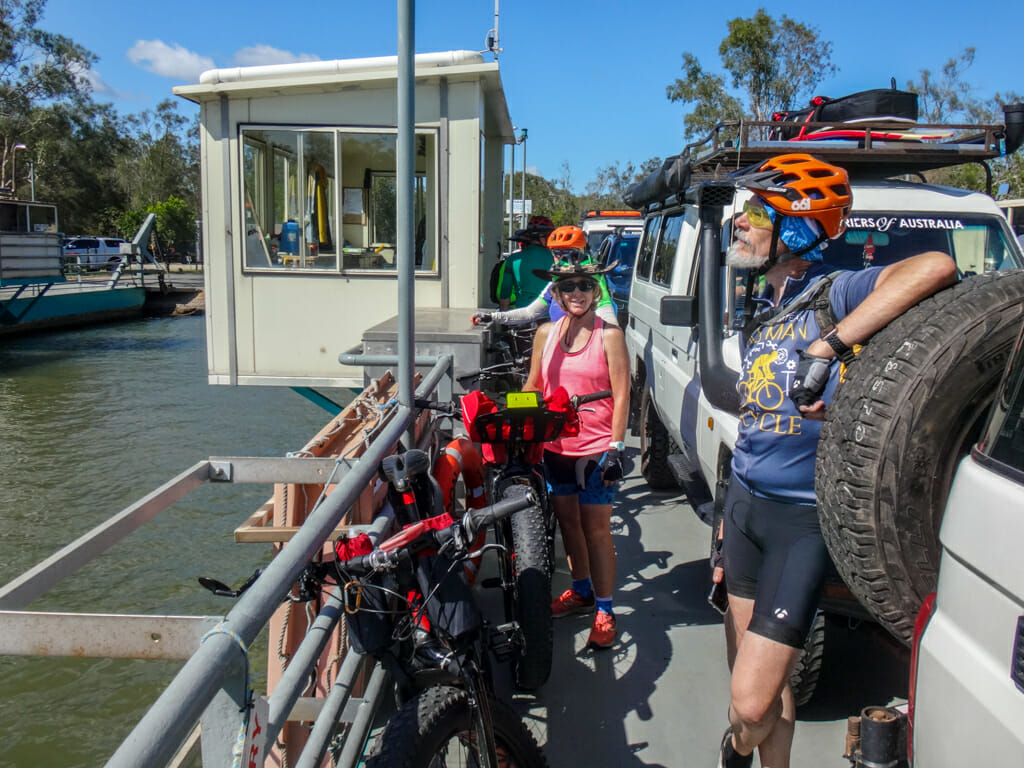 One Saturday morning we paid a dollar to the ferryman, and took the two-minute trip to this magical  new world. 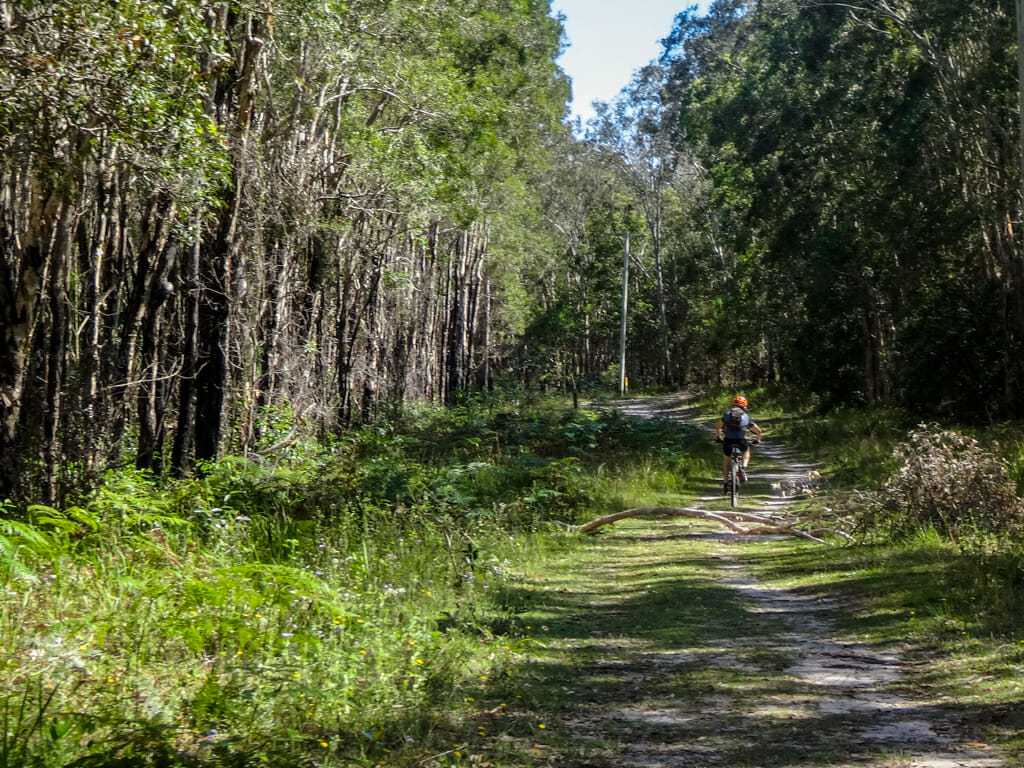 At the end of a short stretch of paved road, a sandy track disappeared into the trees… 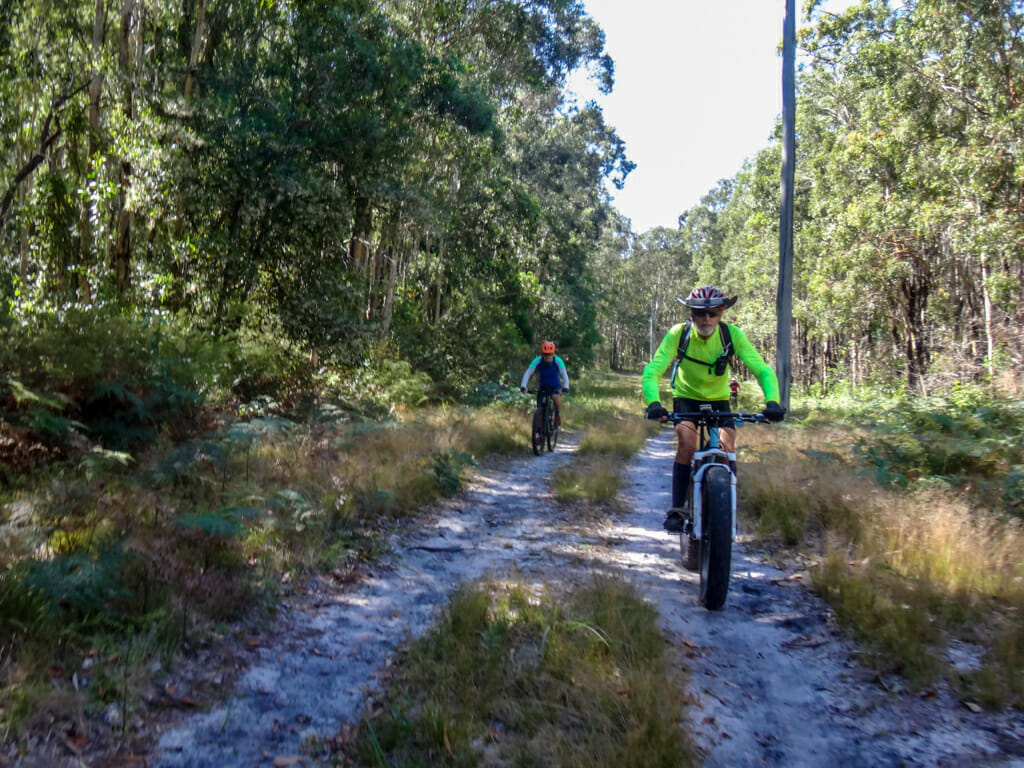 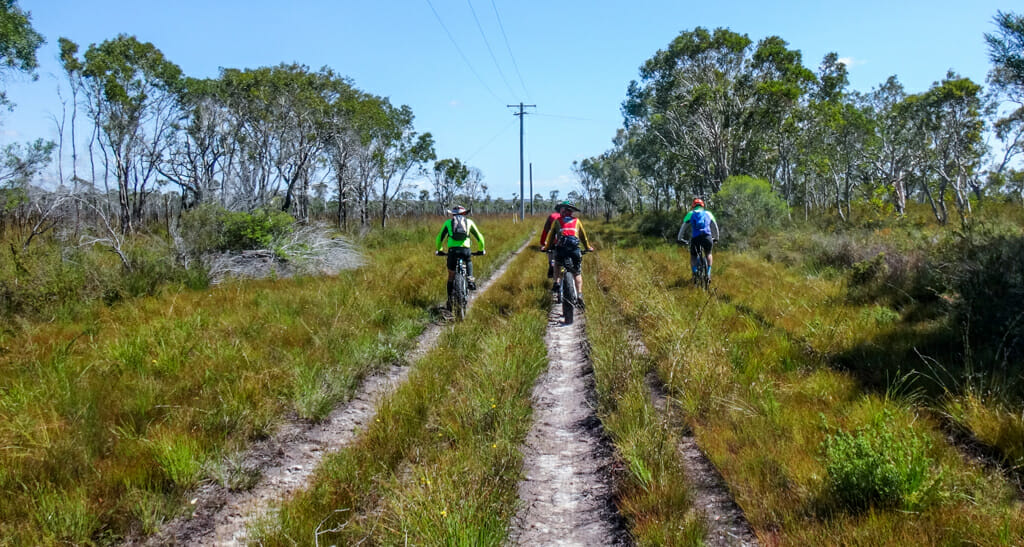 The forest thinned out.  We followed tyre tracks through wide open heath-land. 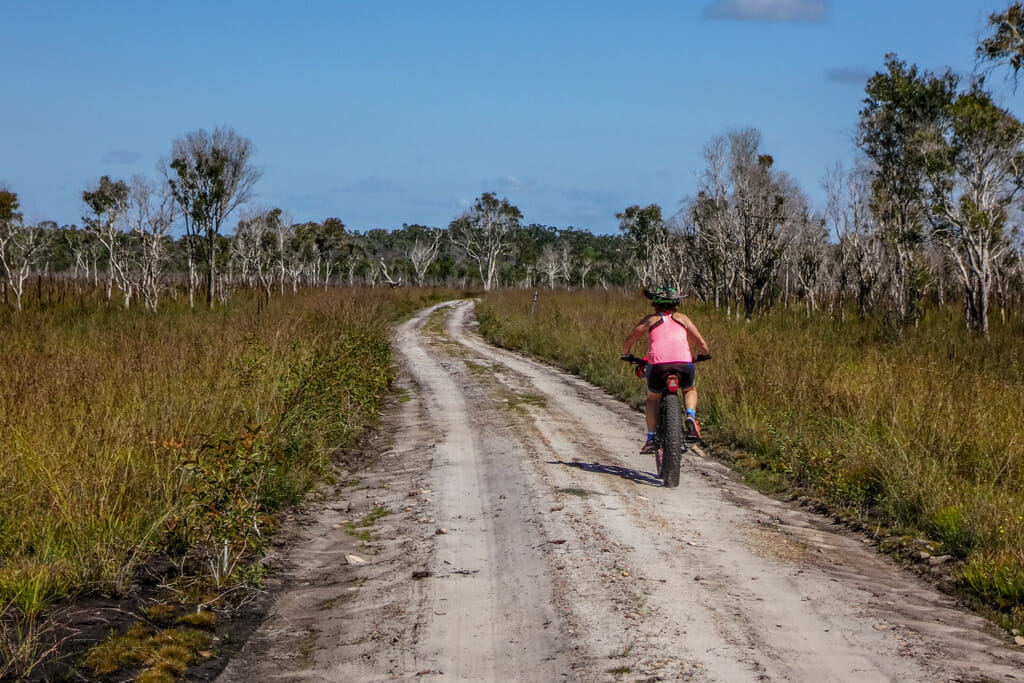 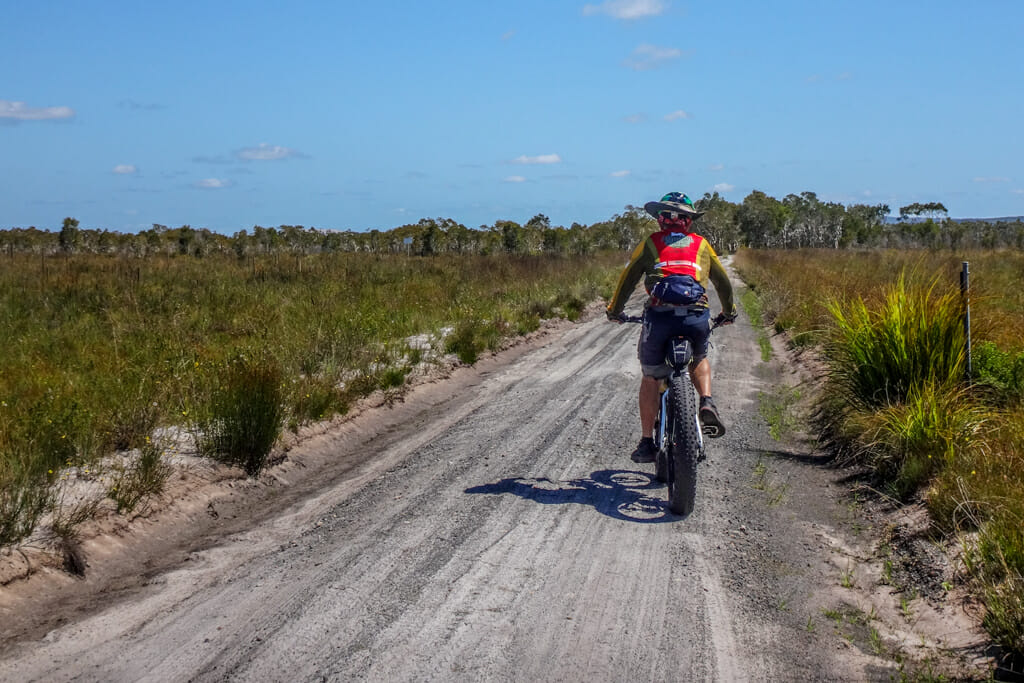 There were no hills to climb, but we had to pedal with more effort than usual because of the soft surface. 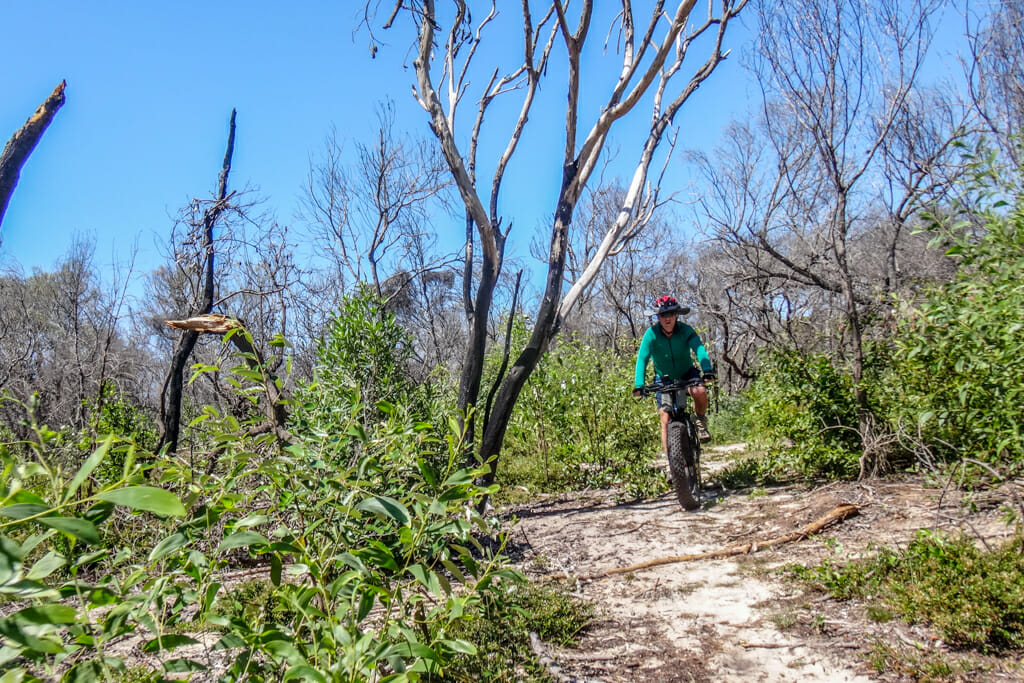 We eventually left the fire trail and followed the walking track for a few kilometres as it snaked through the dunes. 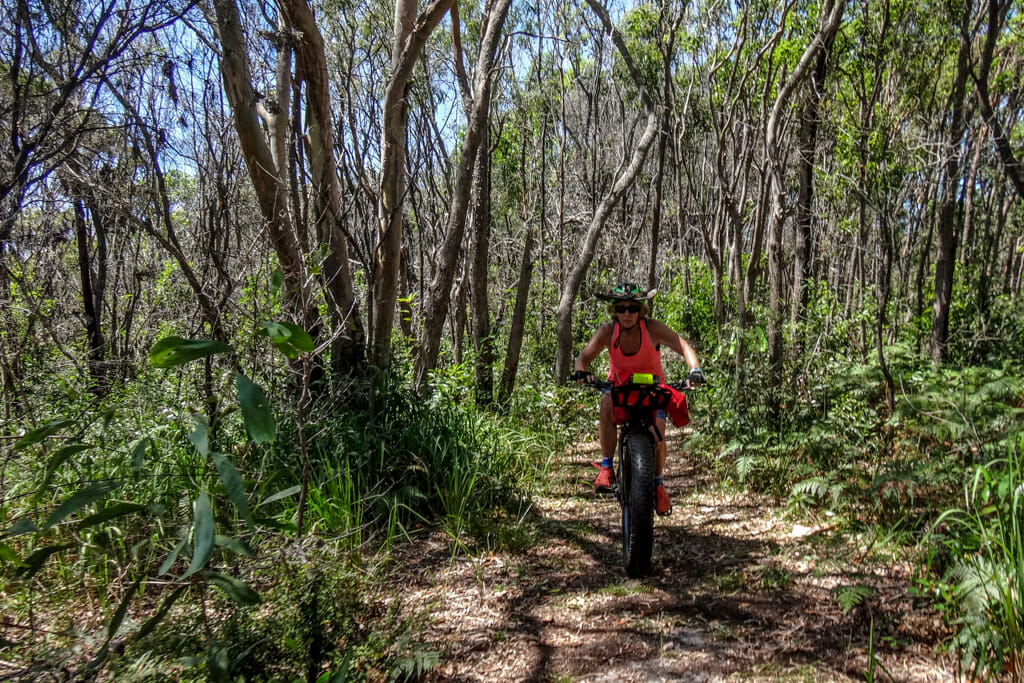 Grass and leaf-litter gave us a harder surface on which to ride.

The tight turns and undulating surface slowed us down slightly, but it was nice to be out of the sun. 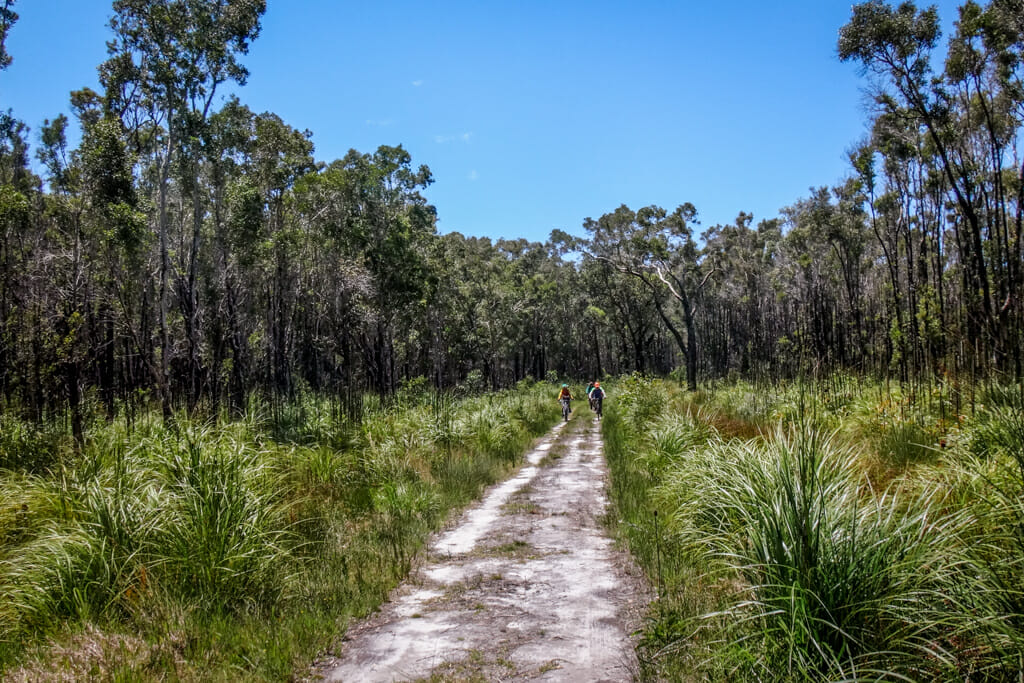 When the walking track crossed another fire trail, we followed it westward towards Lake Cootharaba. 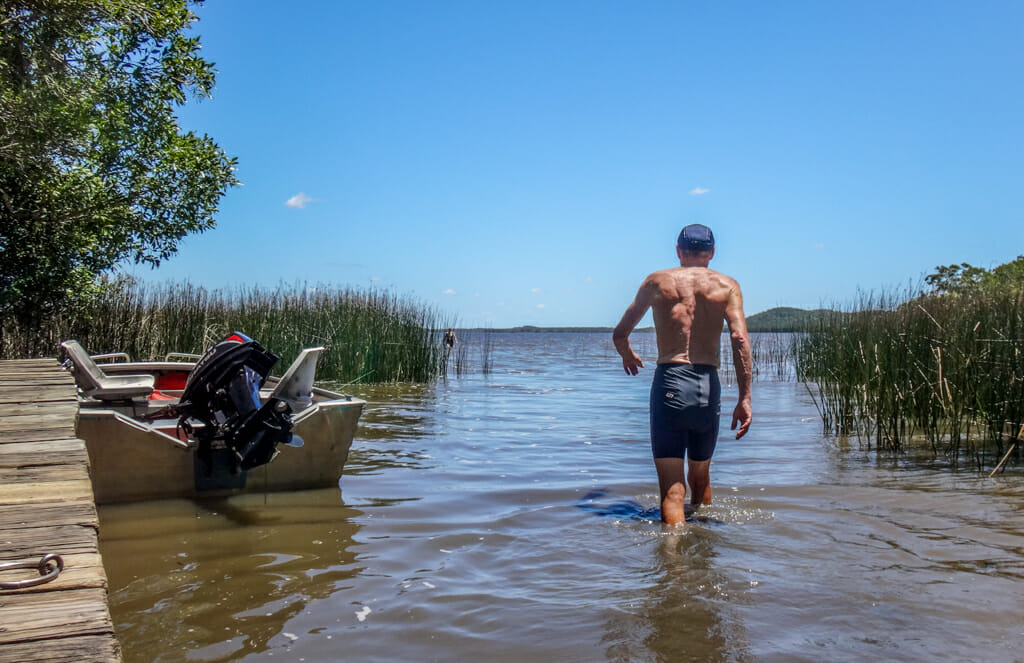 Teewah Landing is a small secluded jetty on the eastern shoreline of Lake Cootharaba. 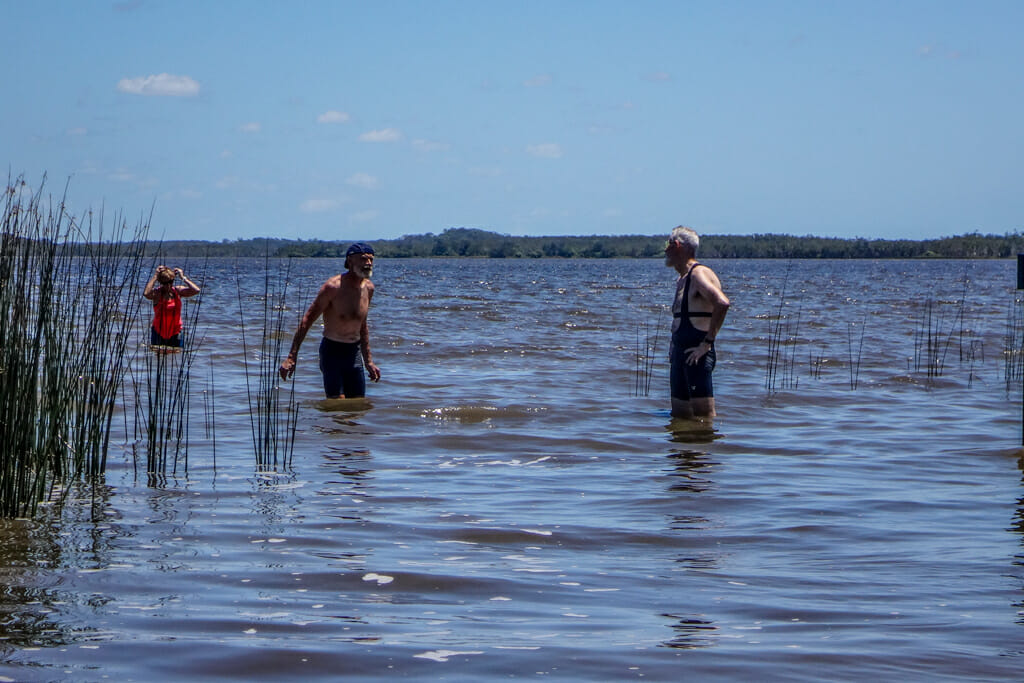 This shallow freshwater lake is popular with canoeists who cross it on their way to the upper Noosa River and the Everglades.

It was pleasant to sit in the water and cool off. 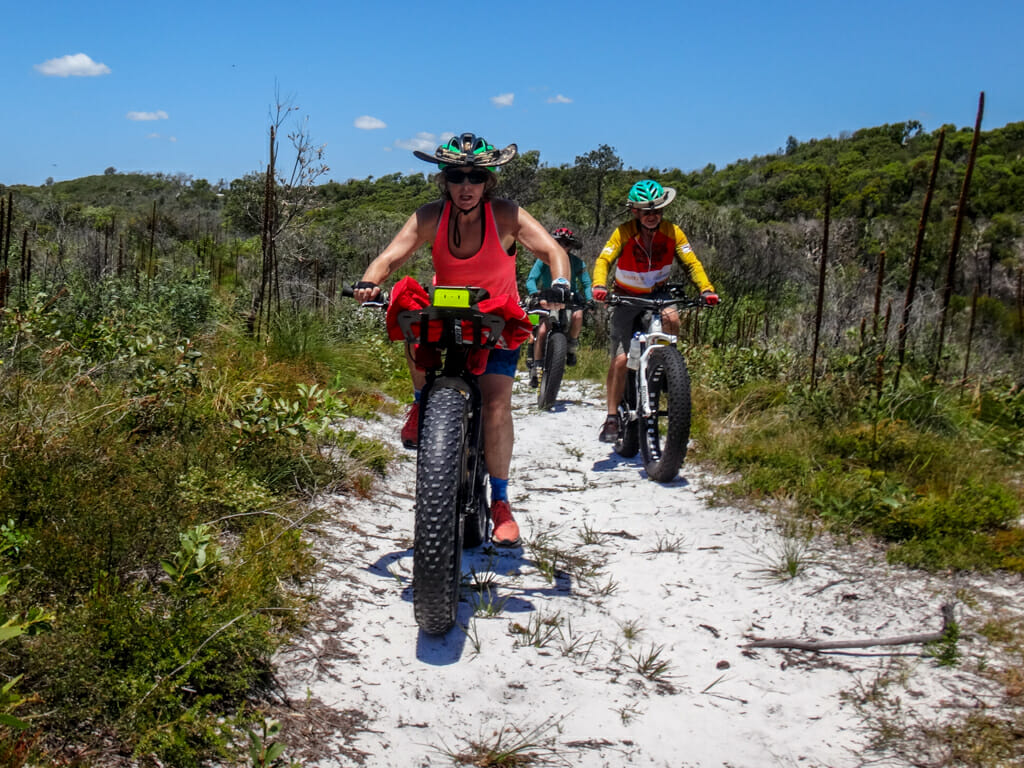 After our swim, we dried off and pointed our bikes up the hill towards the top of Mount Seawah.

The one and a half kilometre climb was steep in parts, and soft in others.  I had to walk in one or two places. 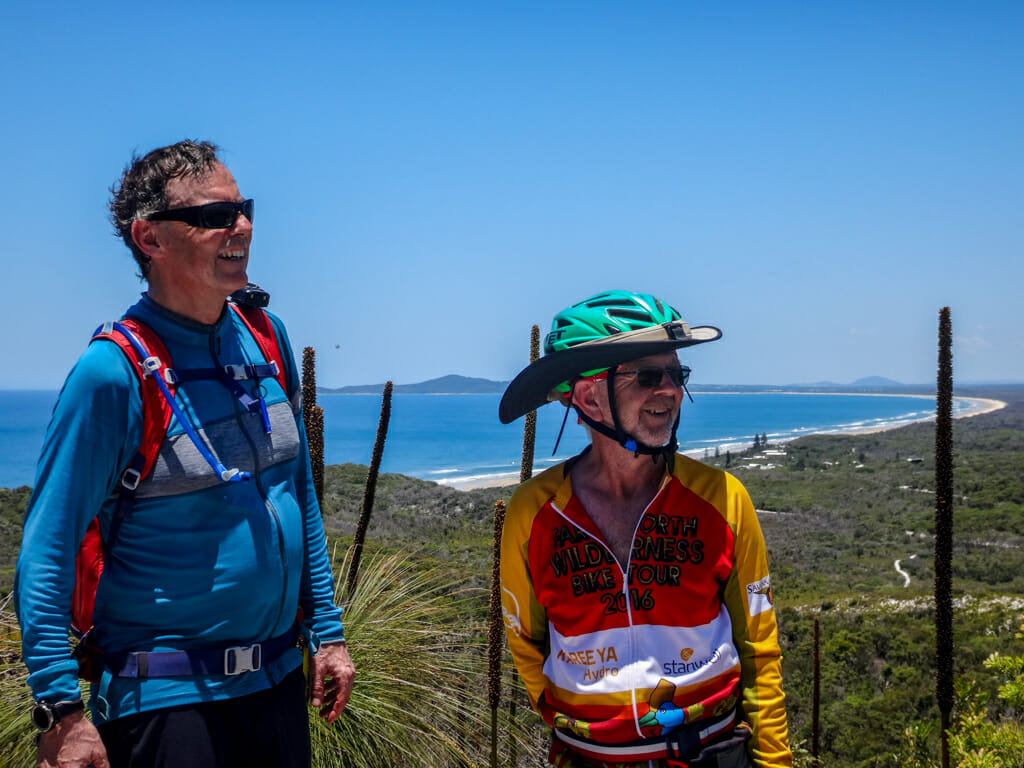 We had a great view from the top.

To the south we could see Noosa Headland.

To the west we could see Lake Cootharaba and Elanda Point. 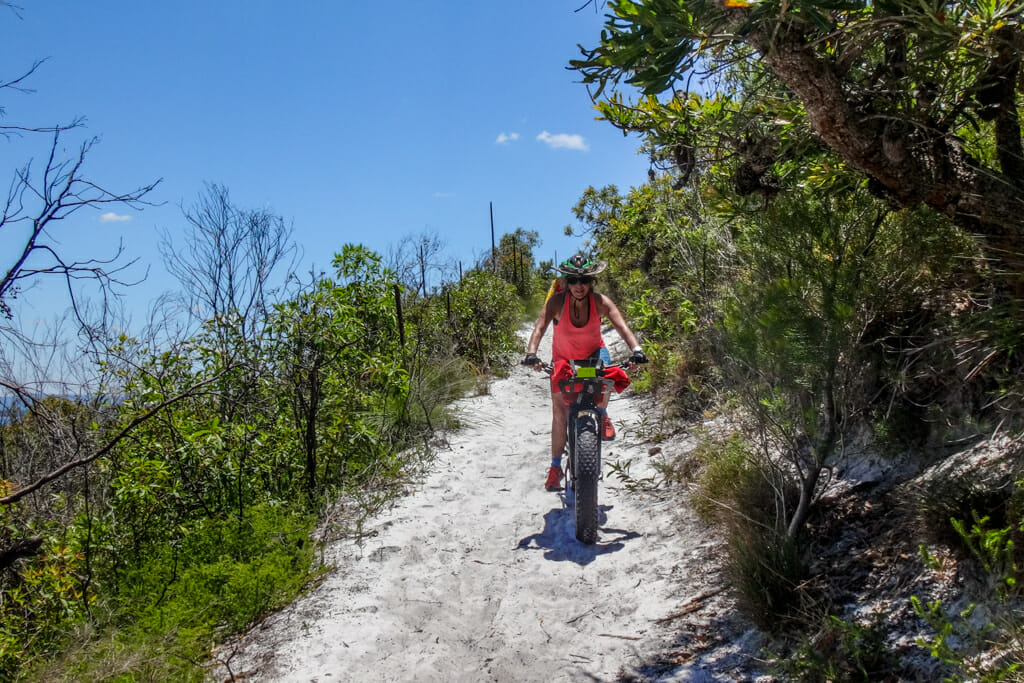 It was much quicker rolling back down the hill that it was climbing up.

I released the brakes and enjoyed the slight drift as I coasted around the soft sandy corners. 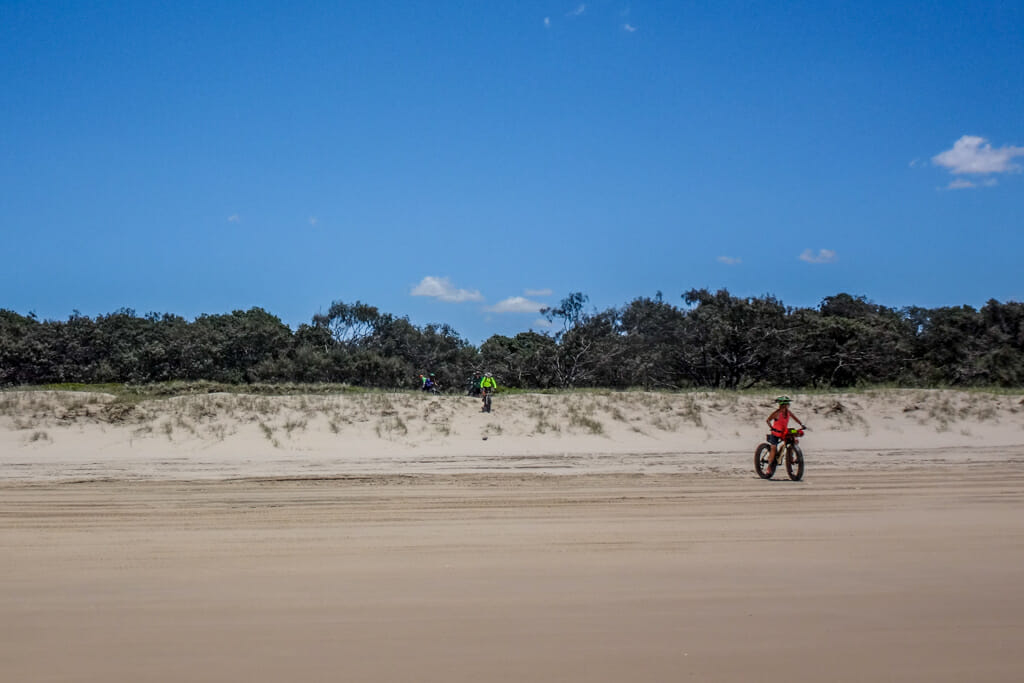 Our track emerged at the beach.

It was busy with 4×4 traffic on their way up to Rainbow Beach, so it took us a few minutes to cross the busy “road”. 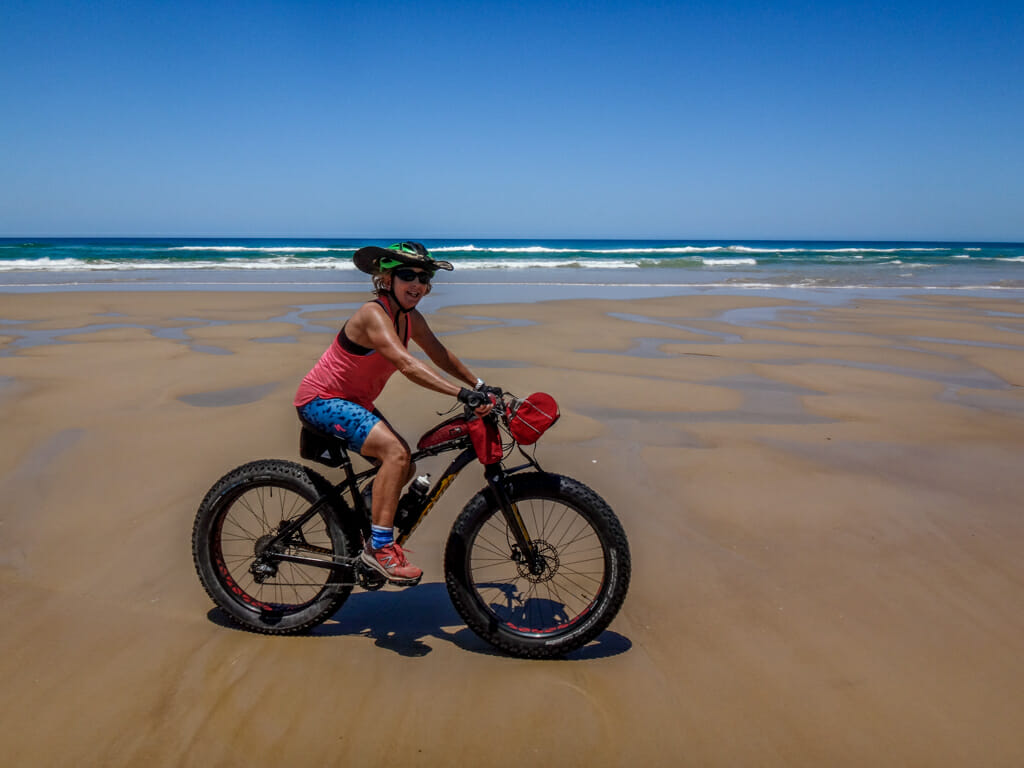 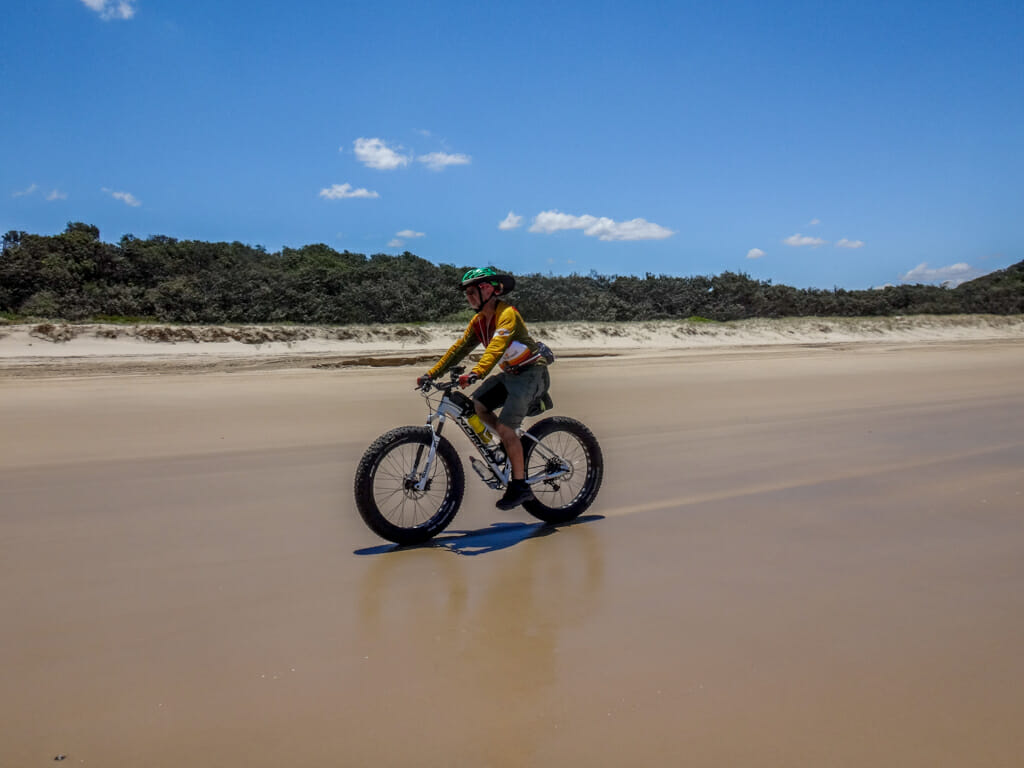 The wind was at our backs.  Pedaling down the beach was effortless, but hot.  We were riding the same speed as the wind – so we didn’t feel it.  There was no breeze to cool us down. 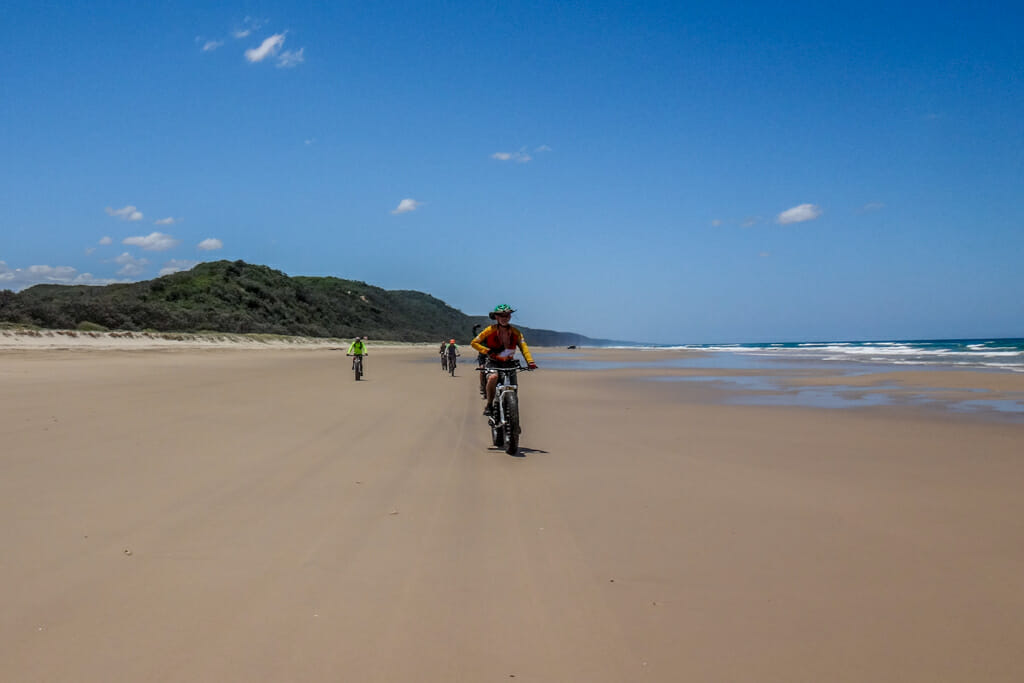 A couple of us took a short cut back to the resort to get some cool drinks, while everyone else rode as far south as possible towards the mouth of the Noosa River.

Colorful surf-kites waved around in the breeze.  Hastings Street bustled a few hundred metres away on the other side of the water. 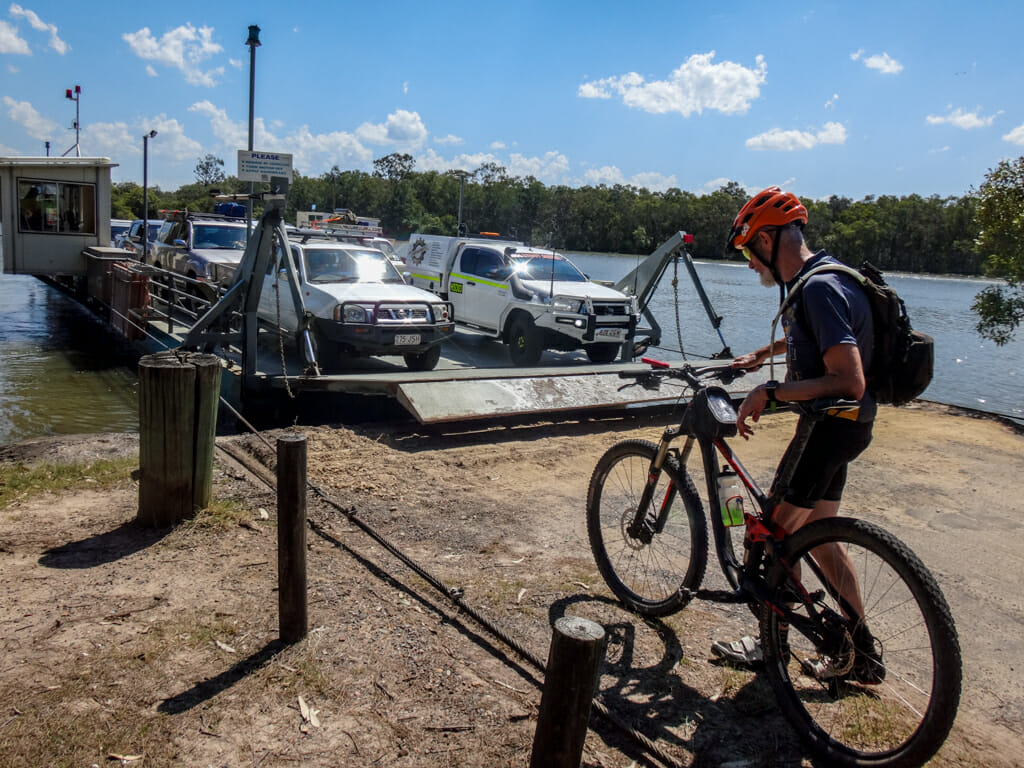 We jumped back on the ferry for the short ride back to the start.

Here’s Tim’s video of his ride down the hill

We rode about 40km in six hours including breaks.

During that time we climbed about 330m in elevation and I burned about 2,000kcal.

This was a pleasant ride on a hot day.

It would be easier in winter (6 out of 10) but harder if you ride a normal mountain bike without fat tyres (8 out of 10).

Thanks Adam, Calum, Kaye, Russel, Tim, Peter and Simon for a fun day out.

One Reply to “Noosa North Shore”