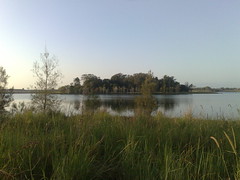 This is the only remaing parcel of virgin rainforest in the Pine Rivers district. It’s never been cleared, and apart from a few noxious weeds like Lantana and Umbrella Trees, it’s pretty much the same as it was before Europeans arrived 200 years ago.

Ironically it’s in the middle of a gravel quarry. The ground around it has been excavated to such an extent that it’s almost an island.

Before Europan settlement, all the land around our neighborhood along the river looked like this. I half expected early 19th century elder, Dalaipi, to peer out at me from behind the trees.

Environmental reports suggest that the salinity of the soil is increasing due to the surrounding excavation, so its lifetime is limited.

I just wanted to capture a glimpse of pre-colonial Australia before it disappears.

And to touch it.

Here’s an excerpt from the Australian Heritage Database about Bell’s Scrub:

Bell’s Scrub is one of the very few remaining patches of lowland rainforest in the Pine Rivers Shire and one of few in the wider area of south-east Queensland. However, the site is small and not in good condition. Bell’s Scrub represents the southern limit of distribution of brown pearwood (AMOPHOSPERMUM ANTILOGUM), and the crown of gold tree (BARKLYA SYRINGIFOLIA). The fig trees on the site are utilized by brown (MACROPYGIA AMBOINENSIS) and topknot (LOPHOLAIMUS ANTARCTICUS) pigeons.

Riding Through the Swamp