In 1859, hopeful gold miners once trekked through this area on their way to the diggings at Tooloom on the Clarence River. Today we thought we’d retrace some of their journey. 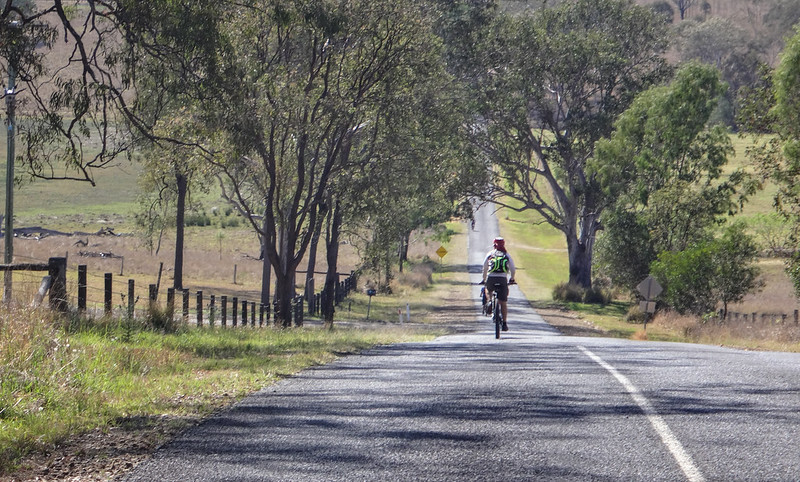 We started at the Mount Alford Pub and headed south.

I had walked some of this route with Justin a few weeks ago, and was eager to return on the bike. 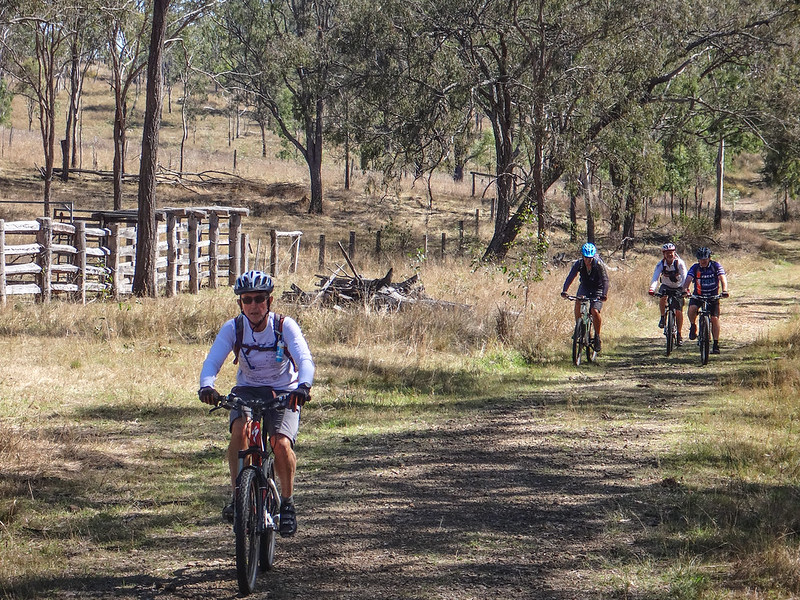 We left the paved road after a few kilometres and followed an old road reserve west through a cattle property. 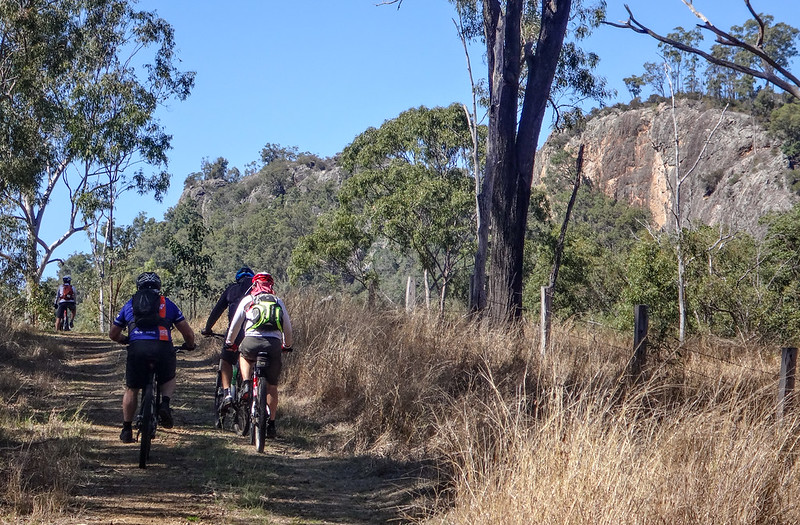 The unusual rocky outcrop of Mount Minto loomed beside us. At just over 330 metres high it’s quite short compared to some of the peaks around here, but it stands in the middle of a plain and is visible from almost every direction. 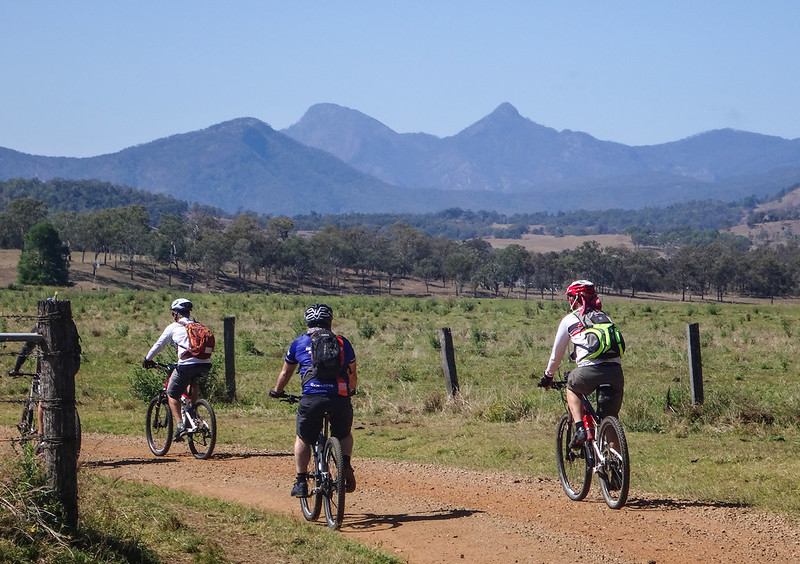 In contrast, at over 1,350 metres in height, Mount Barney blocked the horizon in front of us. Some of the mountains around here are huge. 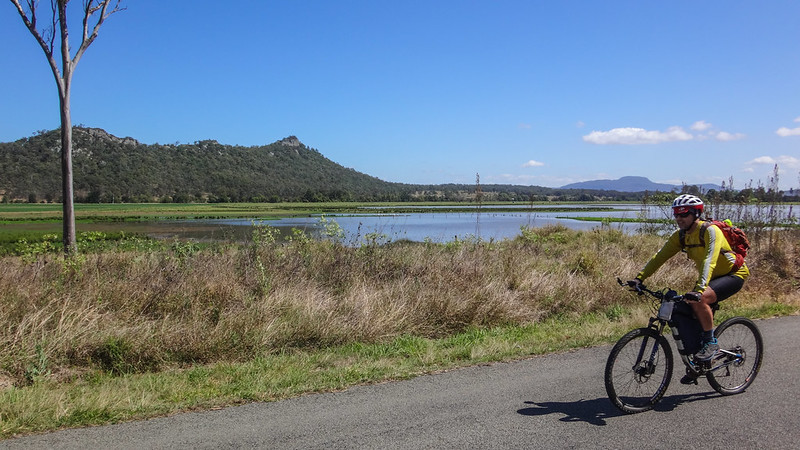 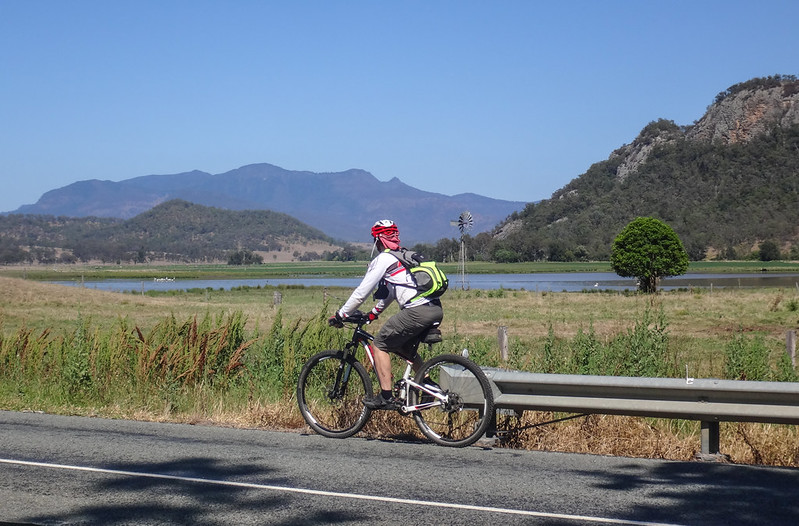 As with most of our rides we tried to avoid paved roads as much as possible. This short section of Carneys Creek Road was relatively quiet and had some good views of the peaks to the west up towards Spicers Gap. 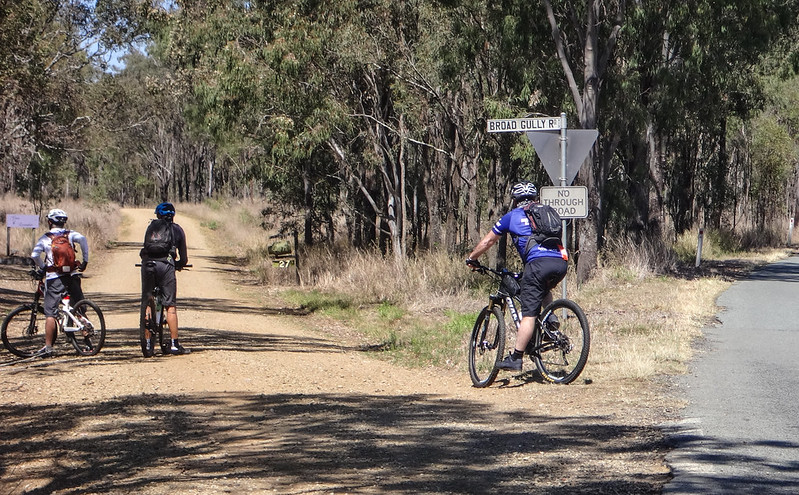 Broad Gully Road looked interesting. From the aerial photos, the road reserve looked rough in places, but it headed in the direction we wanted to go, and I thought it was worth checking out. 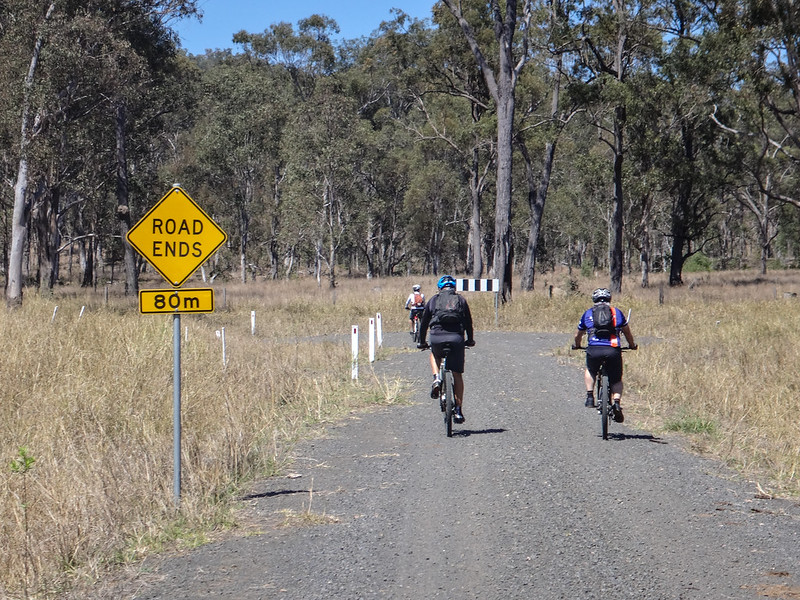 After a few kilometres the road came to an end, but the reserve kept going. So did we. 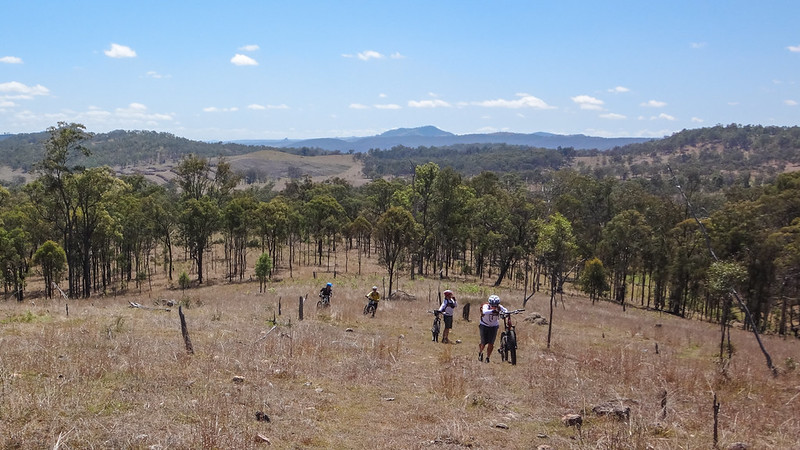 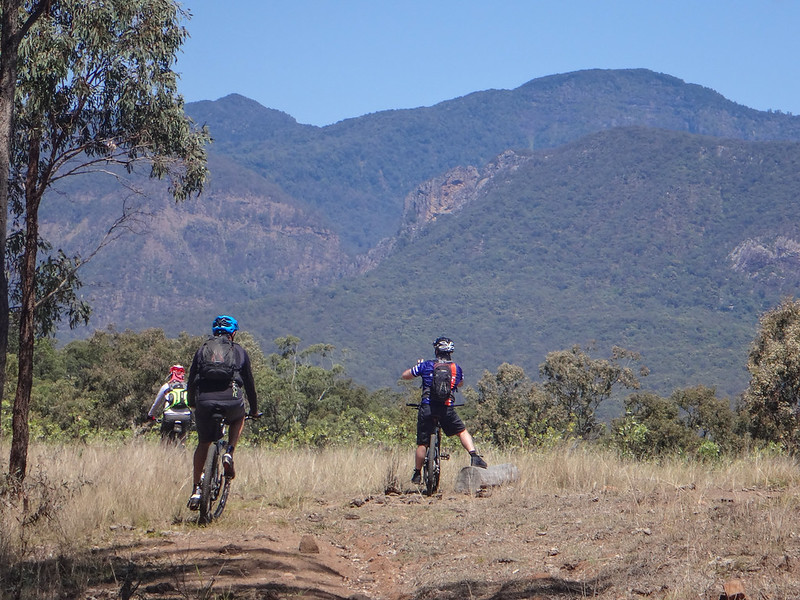 It was rugged and steep, but it was beautiful. 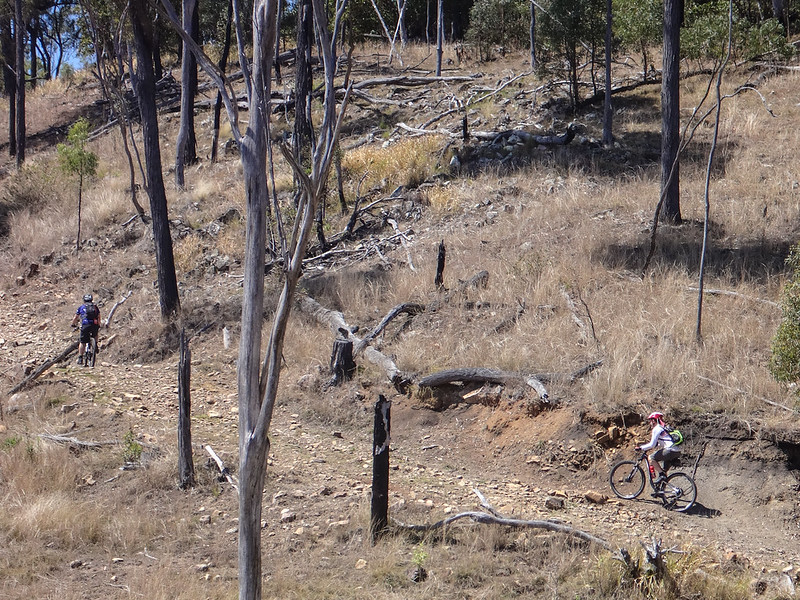 Although large rocks were strewn over the track, this was perfect terrain for the low gears and soft suspension of a mountain bike. 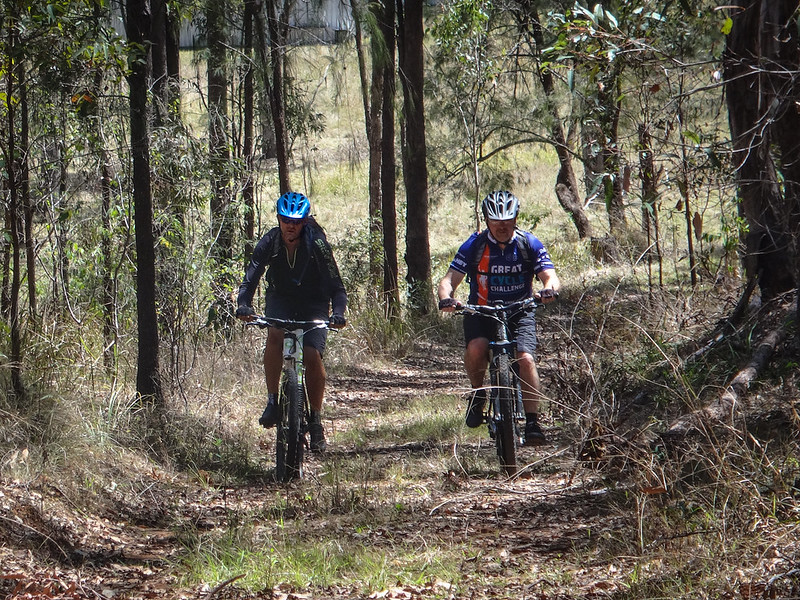 Eventually the track became smoother, and we rolled down the other side of the hill back to Carney’s Creek Road. 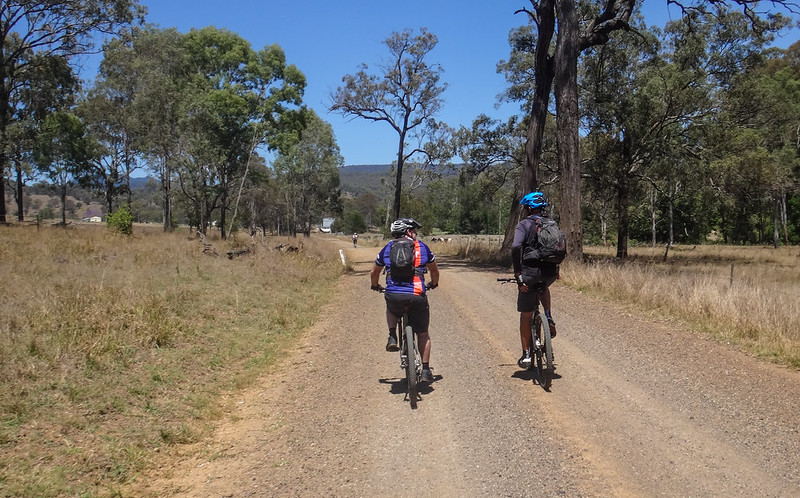 On Chalk Road we passed the historic site of Patrick Carney’s accommodation house and stockyards.

When Gold was discovered at Tooloom in 1859, miners took this road over the Koreelah Range, and stayed at “Carneys Camp”.

One of the locals, Lindsay Chalk (after whom this road was named) wrote that the buildings at the camp were “slab with dirt floors and consisted of a pub with a few huts in which up to 140 miners with their families slept”. Chalk owned “Balbi’s Inn” at Clumber, near Spicers Gap, and claimed Carney had a secret past and may have been an ex-convict. 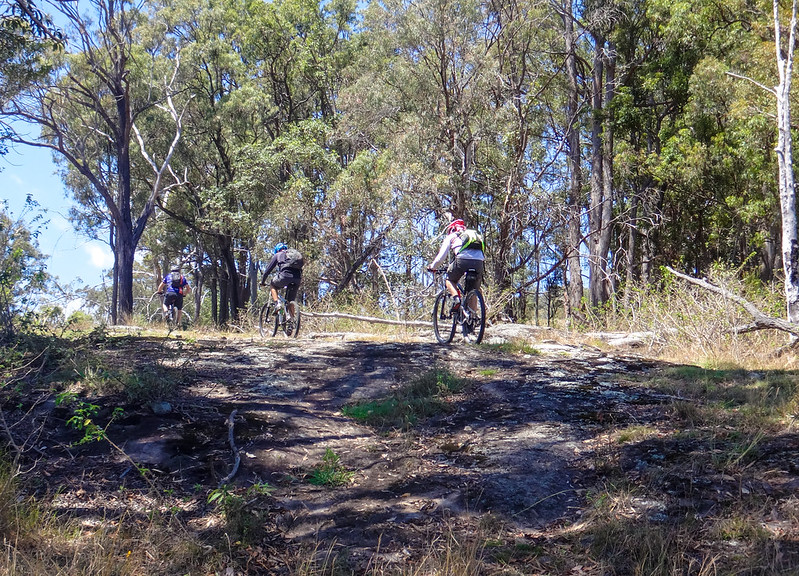 I spoke about this road with local farmer, Steve Wieland. He told me that in order to get safely down these steep roads coach drivers would jam lengths of wood between the spokes of the wheels on their coaches to lock the wheels. The carts would then skid down the hill, not having to rely on their brakes. Thankfully we were going UP the hill. 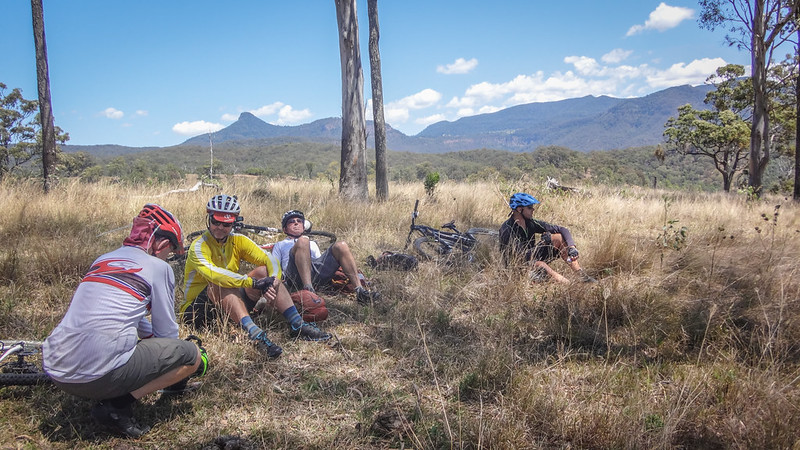 It was hard work climbing these steep hills, so we took a break towards the top and enjoyed the view. 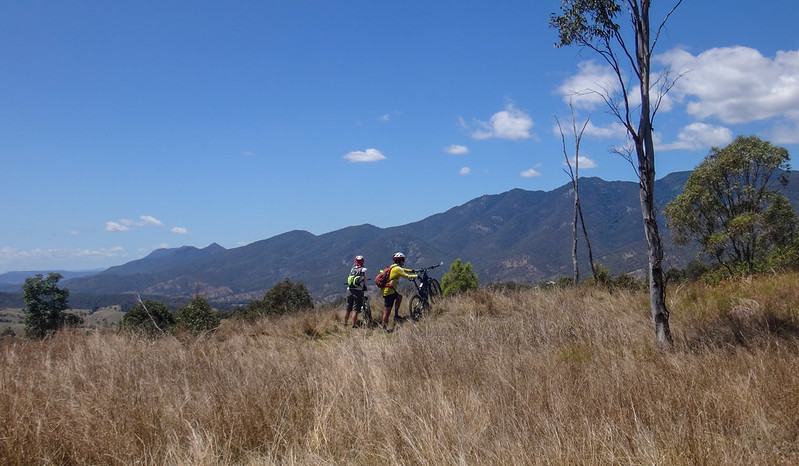 Mountains towered up around us in every direction. The views were wonderful, but as I pushed up the hill I pitied the poor horses that had to haul carts up here 150 years ago. 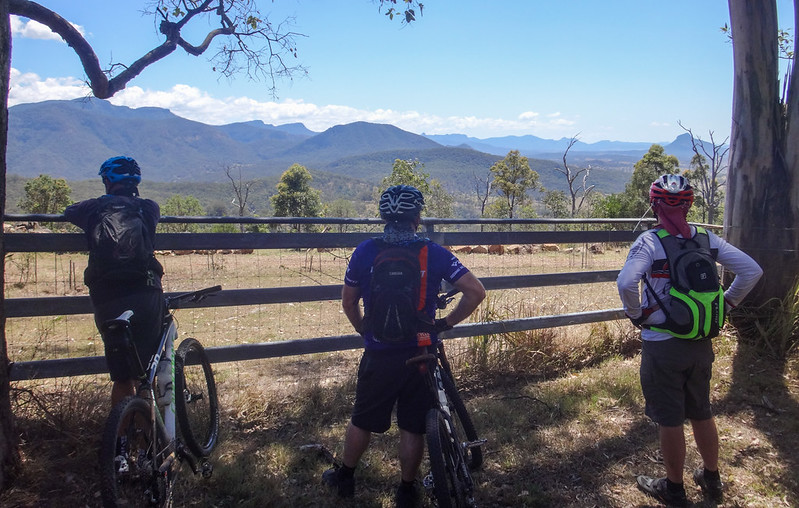 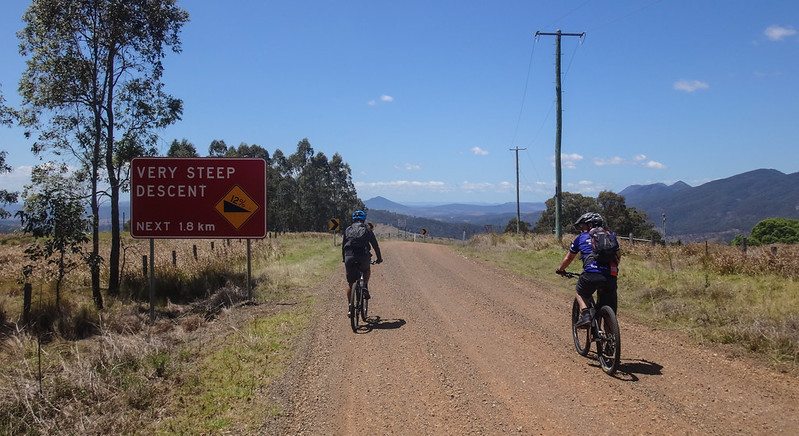 At the top of the hill we joined up with Carneys Creek Road again, and enjoyed the panorama one last time before the long roll back down. 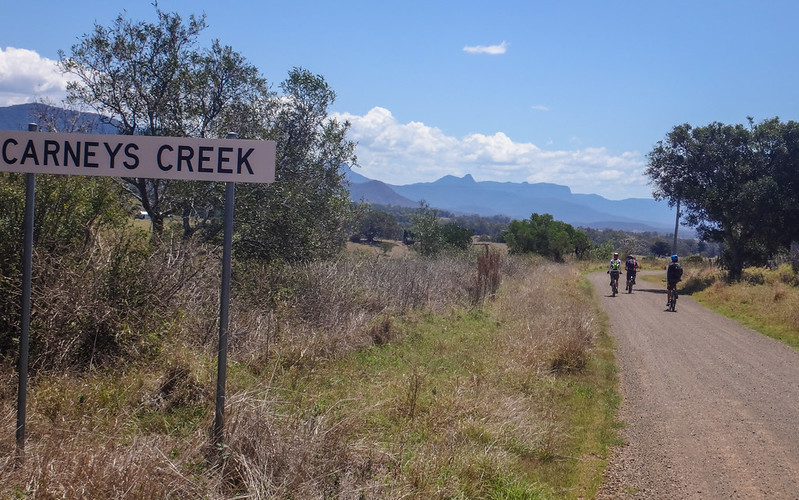 It took us over an hour to get up there, and about 5 minutes to get back down 🙂 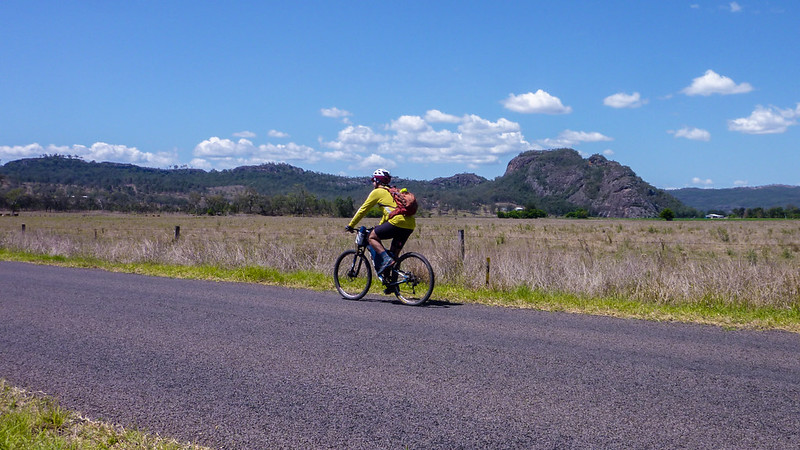 At the bottom of the hill we took the “easy” way back to Mount Alford along the paved road, and enjoyed a long lunch in the pub.

We travelled a total of 52km in 5 hours including breaks, climbing a total of about 900 metres.

This is a reasonably challenging ride. On a reasonably warm day like today I’ll rate it 7.5 out of 10 on the tough-o-meter. Add an extra point in summer.

Thanks Darb, Eric, Paul and Russel for another fun day out on the bikes.