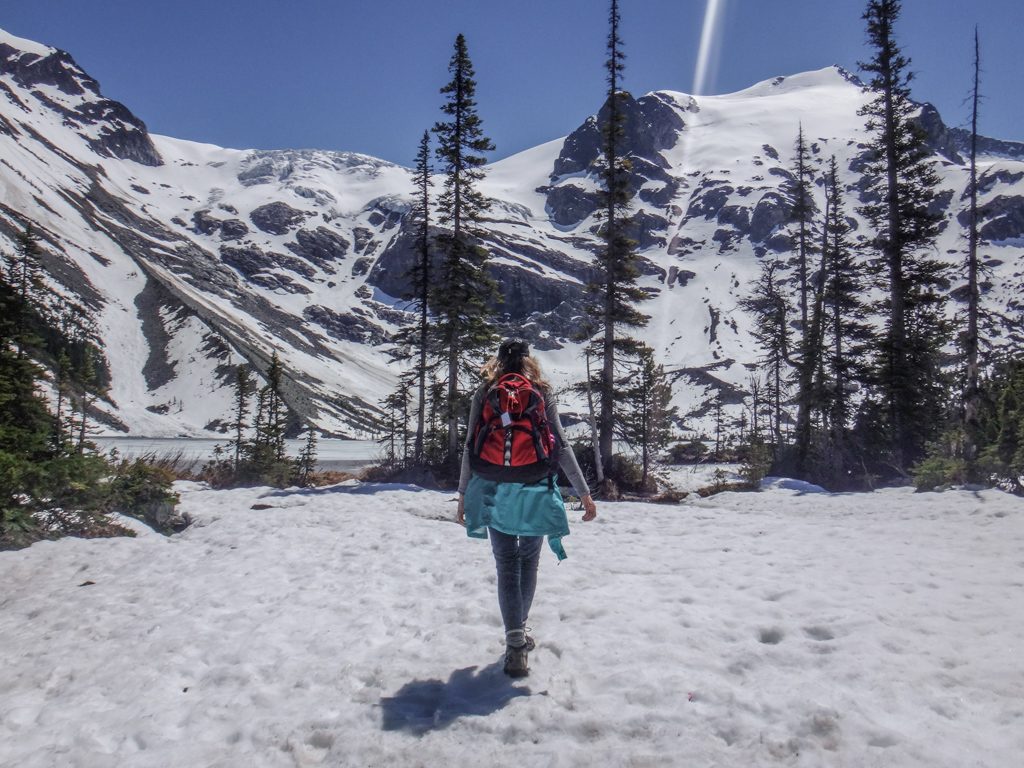 Joffre Lakes is a set of three glacier-fed lakes high in the Canadian Rocky Mountains between Whistler and Jasper. Today Liz and I decided to check them out.

Driving through the Rocky Mountains can be time-consuming. The roads are great, but so are the views. We often found ourselves pulling over to the side of the road to enjoy the view. A drive which should have taken an hour or two would take twice as long because (as tourists do) we wanted to stop and appreciate the panorama.

We started our hike near the lower lake. The water has taken on a distinct aqua colour from the “rock flour” in the water. Over time, glaciers grind at the rocks, releasing a fine powder into the water. The powder makes the water appear a stunning blue-green color. I understood the science, but I was still impressed when I saw it. 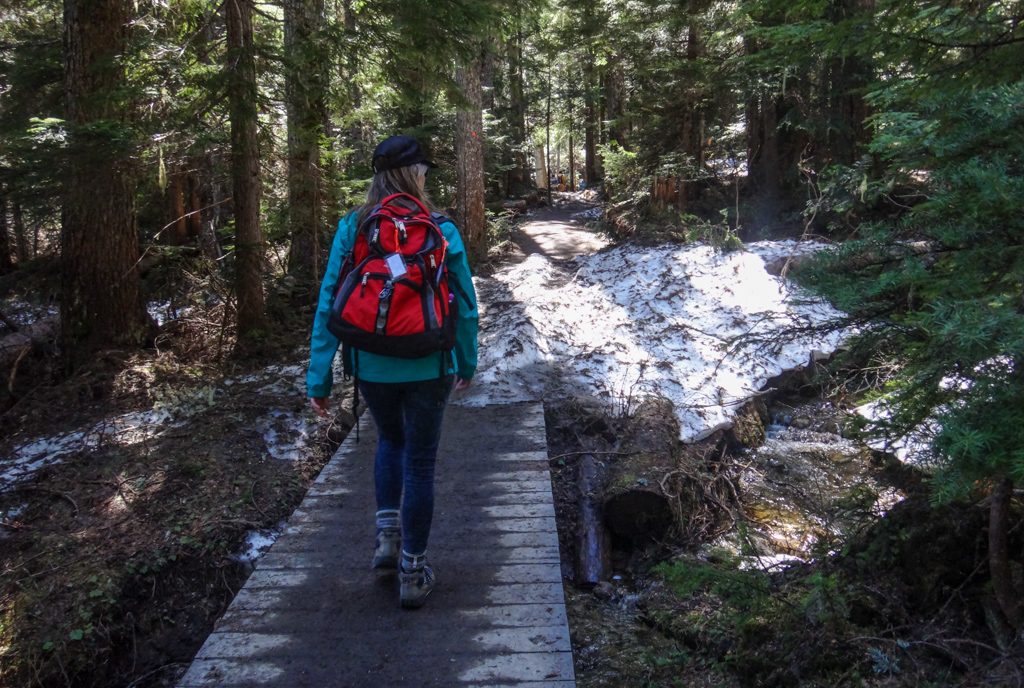 The trail followed the eastern side of the lower lake, through a pine forest and up the hill.

Despite it being early June, and therefore early Summer, thick drifts of snow still lay on the ground. As people who aren’t used to snow, we were excited to walk around on it – even if it was hard and slippery. 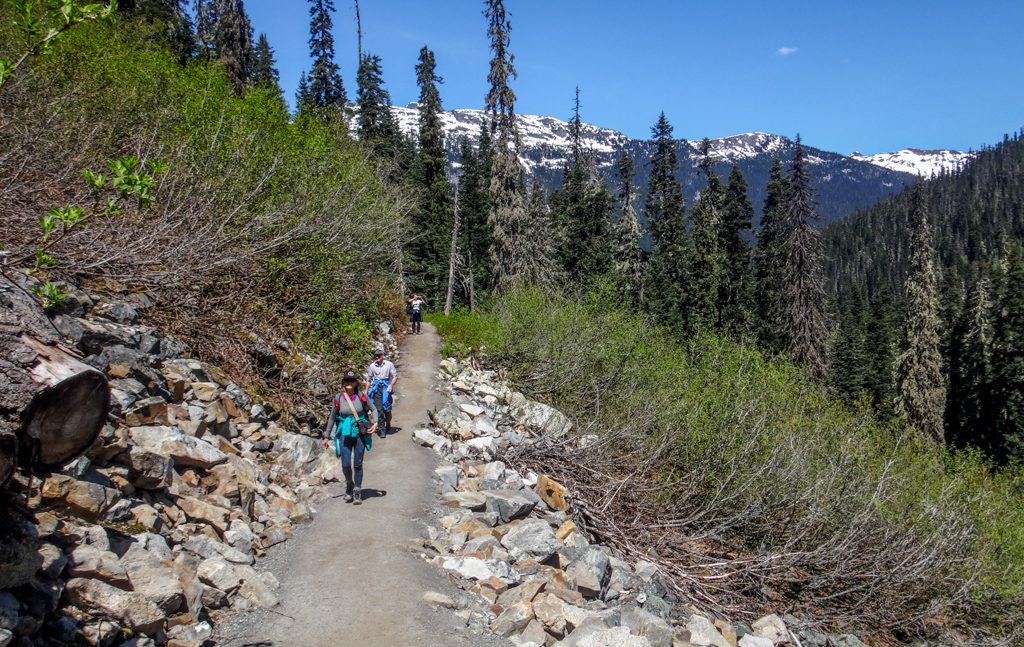 After a short distance the trail left the shelter of the pine trees, and we slowly climbed towards the middle lake in brilliant sunshine. Snow, hot sun, blue skies – this was strange weather. We were loving it. 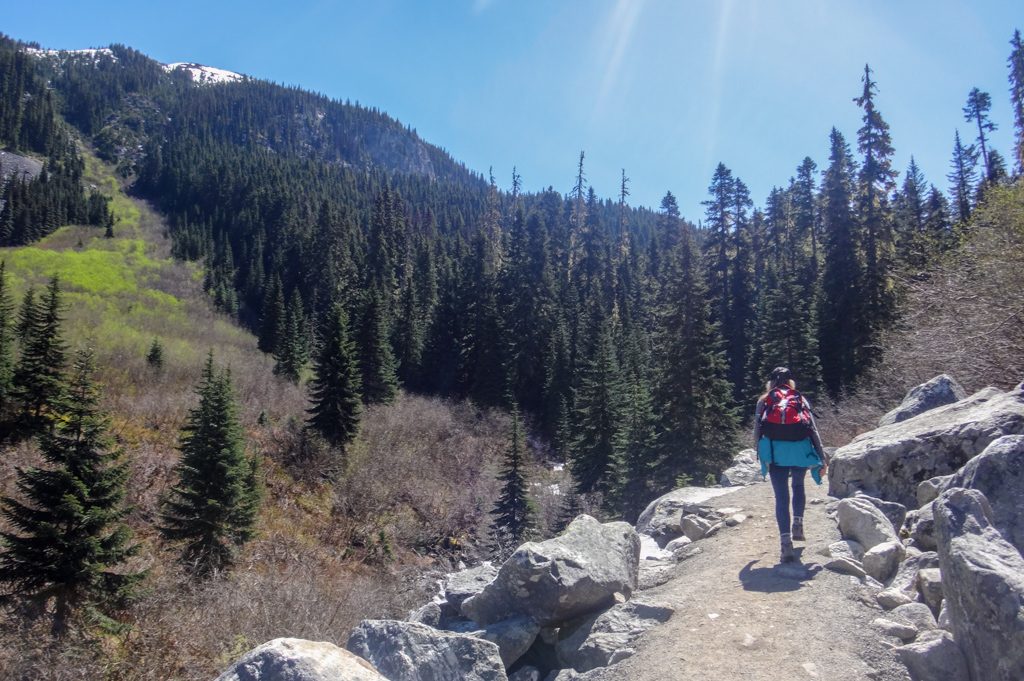 One exciting thing about travel is visiting landscapes that are unfamiliar to us. These steep snow-capped, pine-clad hills were definitely not like anything we’d seen in Australia.

As Dorothy said in “The Wizard of Oz”, “Toto, I’ve a feeling we’re not in Kansas anymore”. 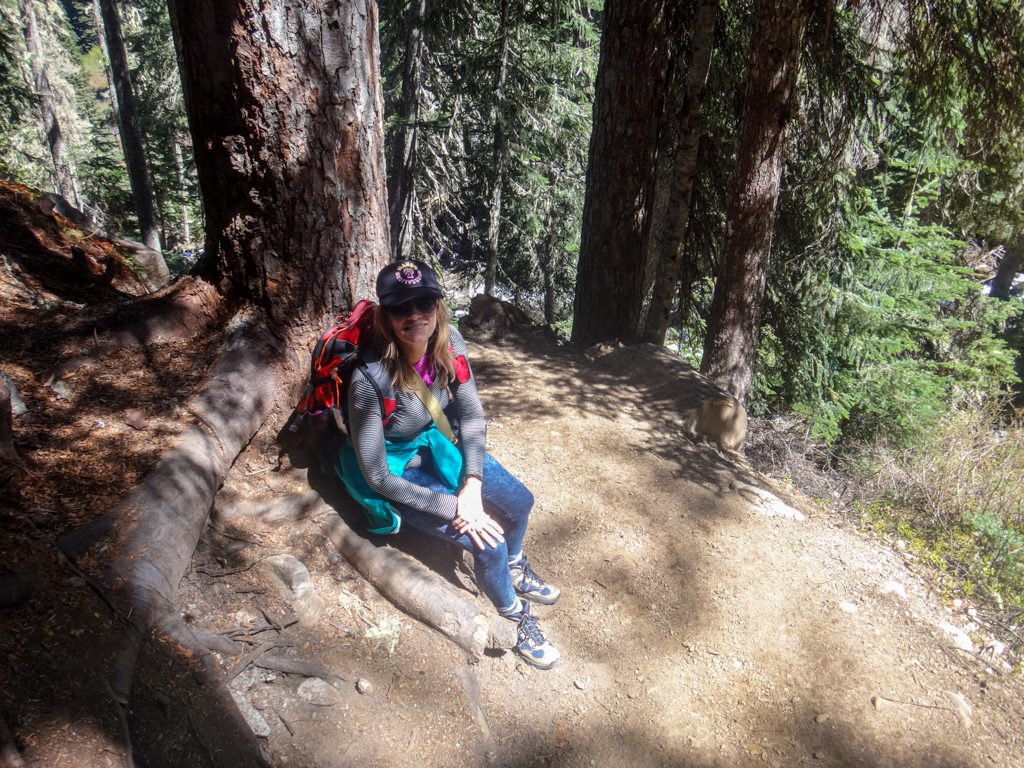 It was a tough climb. We stopped a couple of times to catch our breath.

Once or twice we asked ourselves, “Is this really worth the effort?”

An Aussie couple passed us as we rested.

“It it much further?” we asked.

“Not far,” they replied, “but the third lake is even more impressive. Make sure you have a look.” 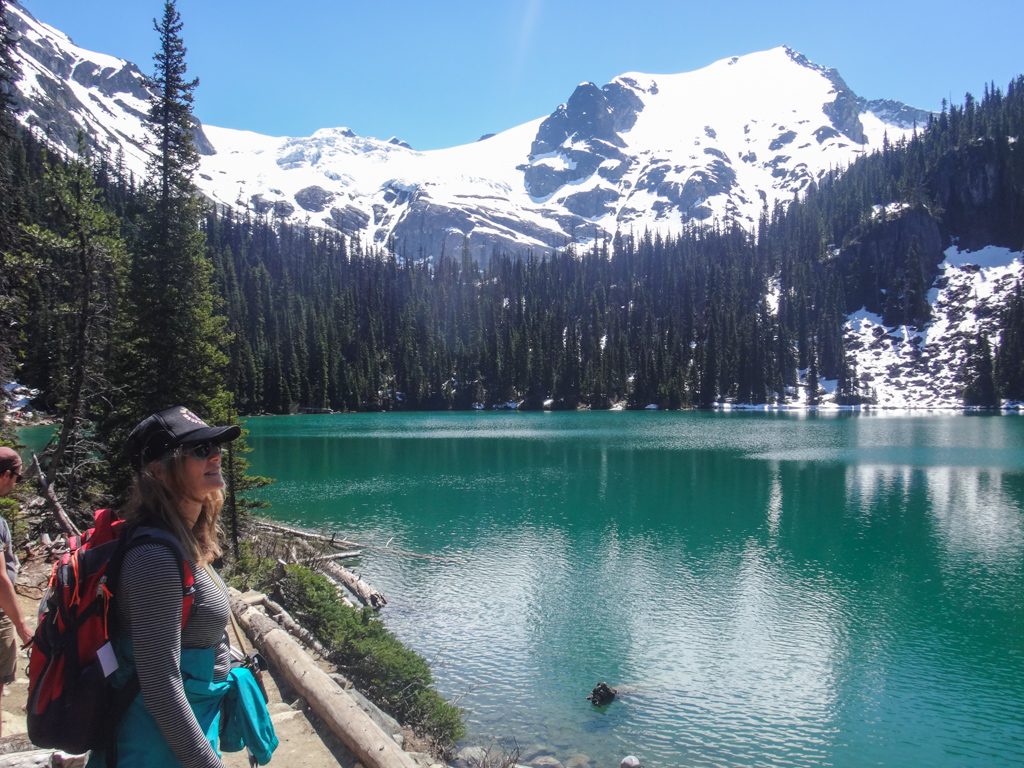 The middle lake was more impressive than the first.

Snow came down to the shore line. The water seemed even bluer. The white caps of the mountain tops seemed even closer.

It was worth the effort. 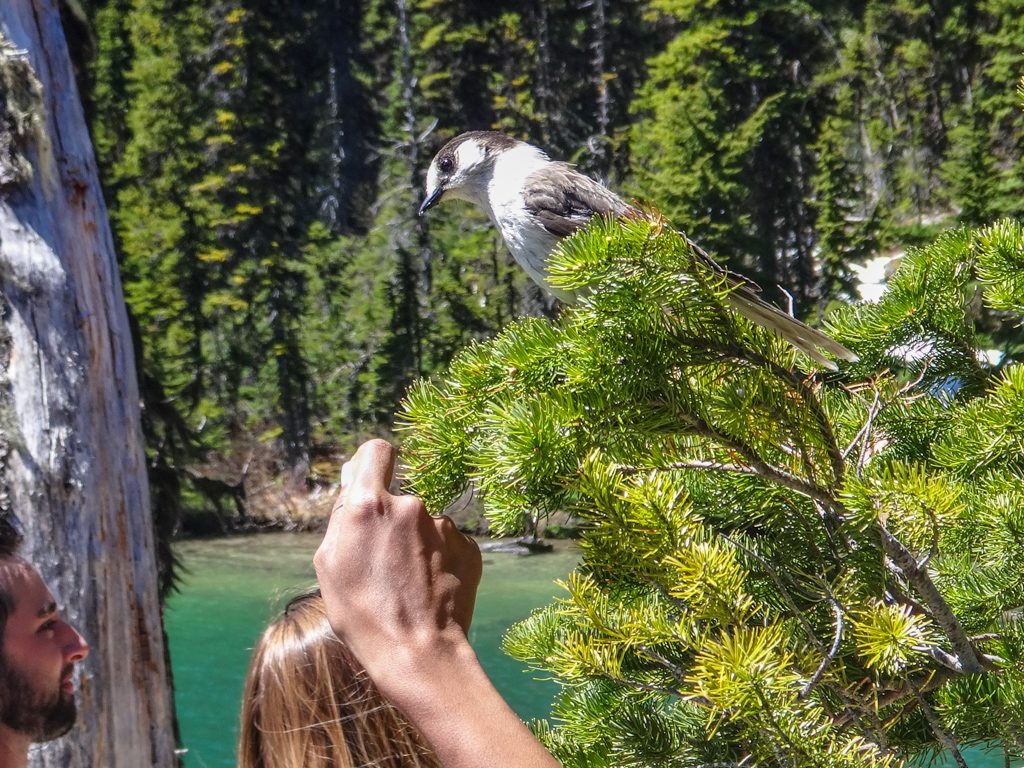 The birds were bold. Signs constantly reminded us not to feed the wildlife. But even if you pretended to have something in your fingers, the birds would jump onto your hand and look for it. They were fearless. 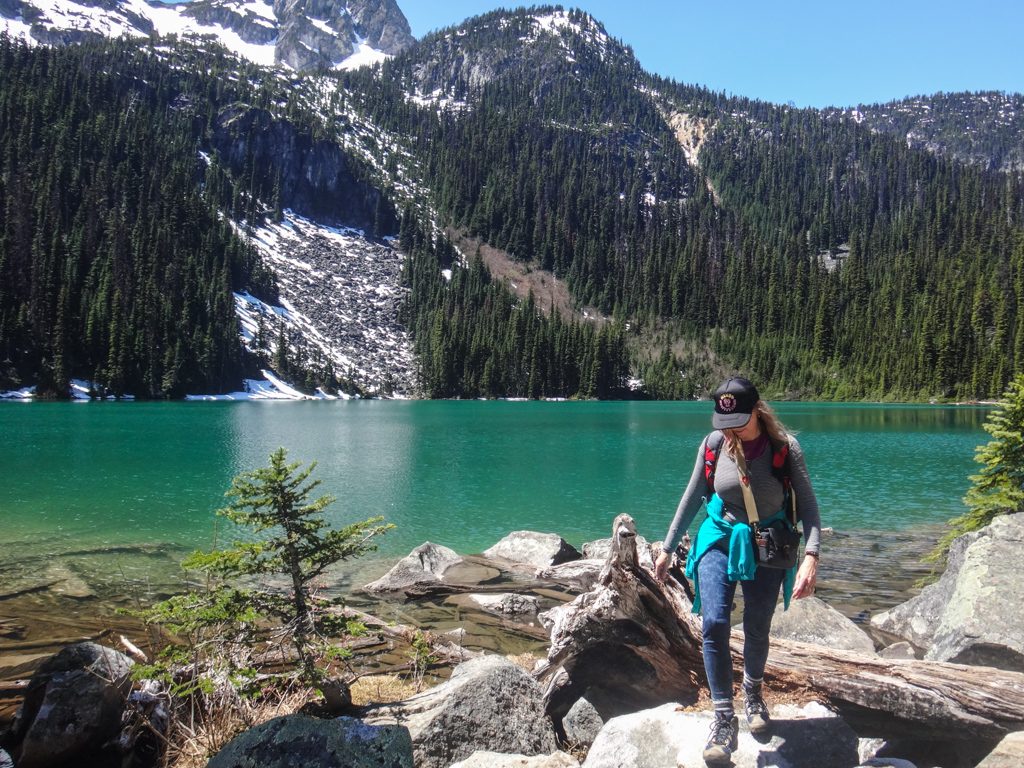 We spent a short time admiring the view, but decided to climb further and have a look at the upper lake.

An icy waterfall cascaded down rocks beside track.

There were so many amazing sights in one walk. It was difficult to take it in. 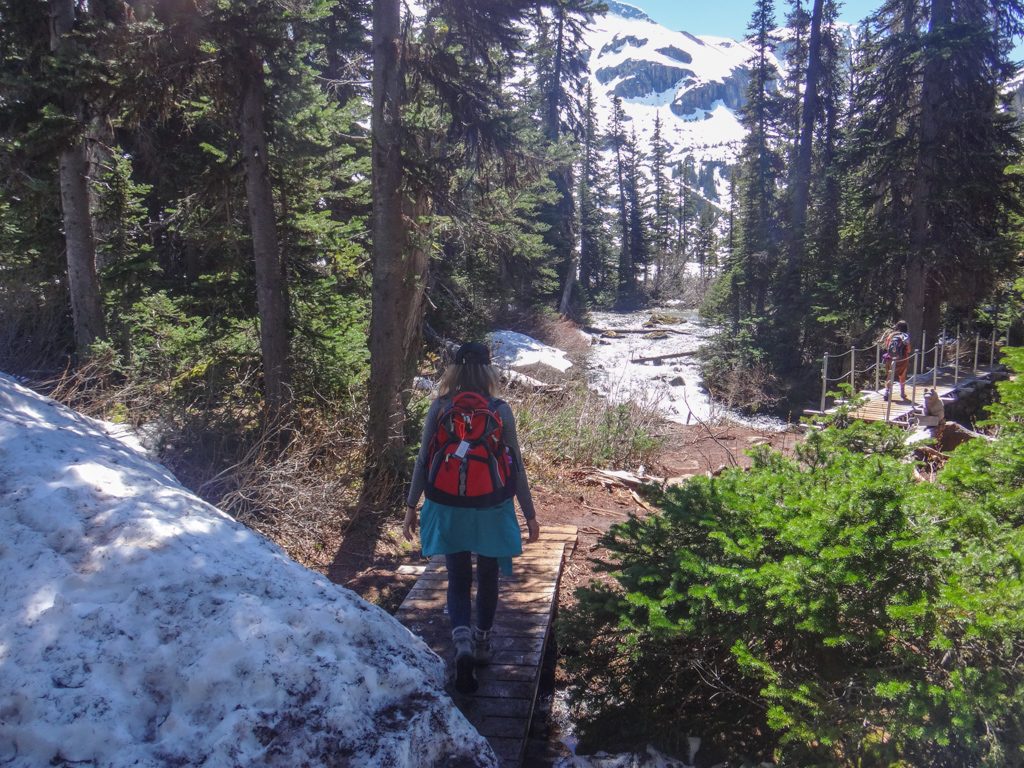 The snow grew thicker. We crossed a couple of wooden bridges over cold babbling streams. We were almost there.

Through the trees we could make out a frozen lake with glaciers coming down to shore.

We trudged through more snow, looking for a place where we could have a better view of the lake.

We scrambled over a few rocks, found a flat spot to sit down, and soaked up the beauty with a few other people.

What a beautiful place. Liz and I were both happy we’d made the effort to climb up here.

I’d rather see more things like this than be wealthy. There’s something powerfully inspiring about feeling awe in nature. I love it.

Reluctantly we started our return journey down the mountain. 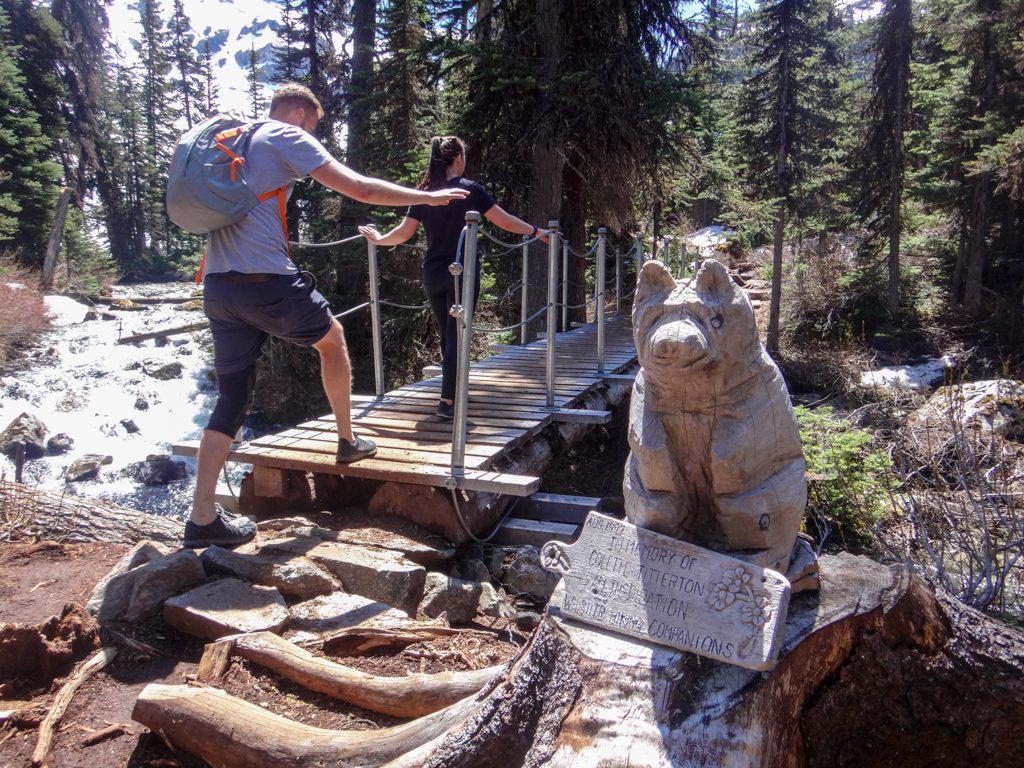 It’s amazing what you notice on the way back – things that escaped my attention on the way up. 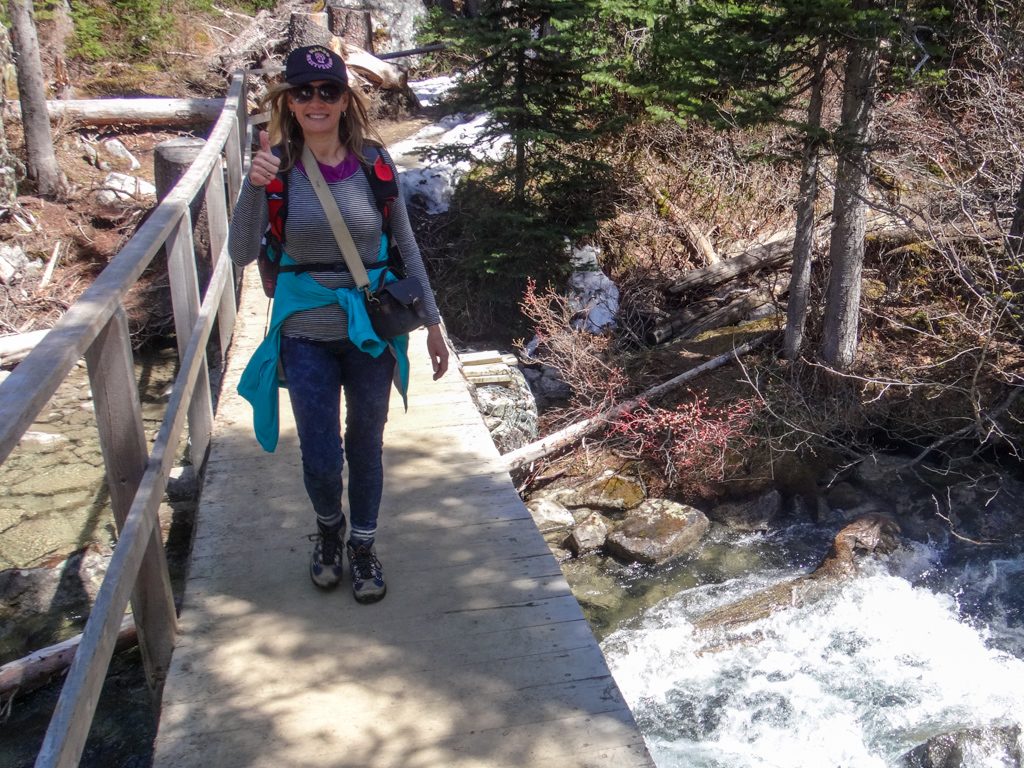 Back over bubbling mountain streams.

This had been a good day. 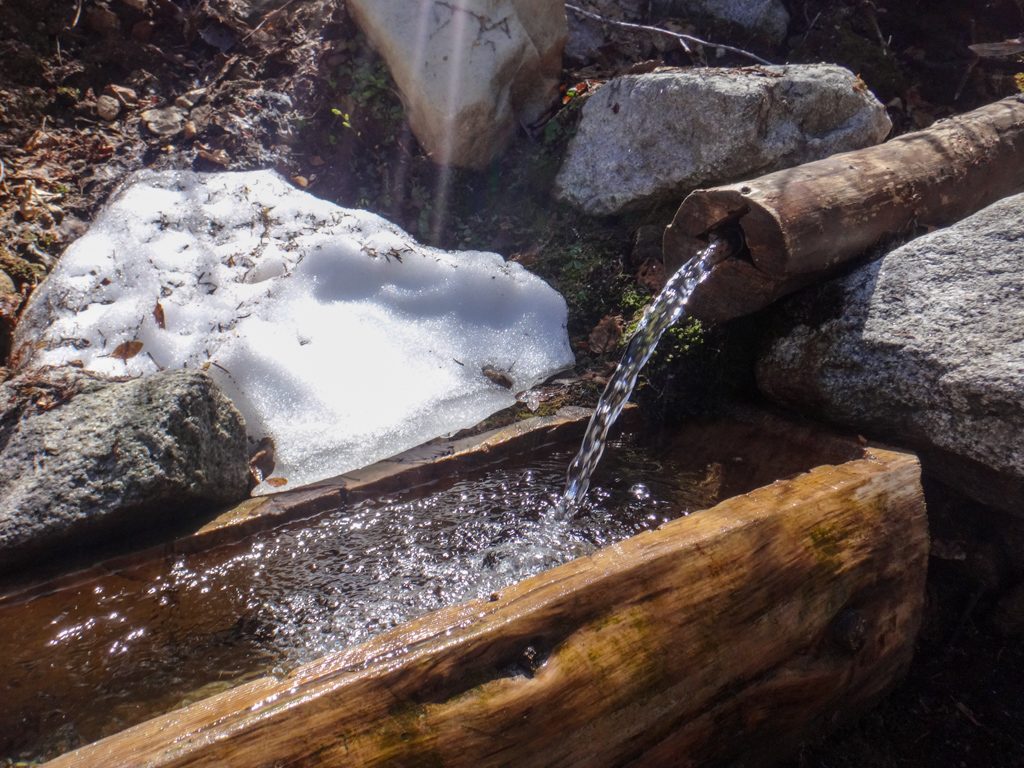 The water looked pure. Someone had even rigged up a wooden pipe to let people refill their bottles. 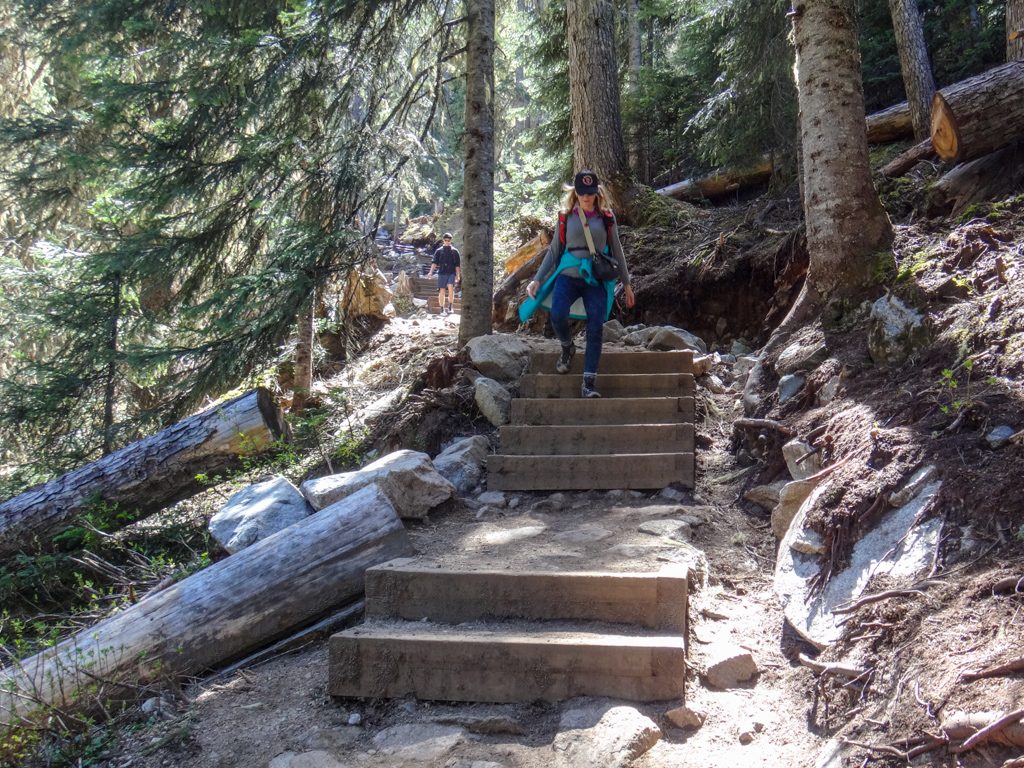 As any experienced cyclist will tell you, it’s easier going downhill than up.

This was a beautiful hike through some stunning country. 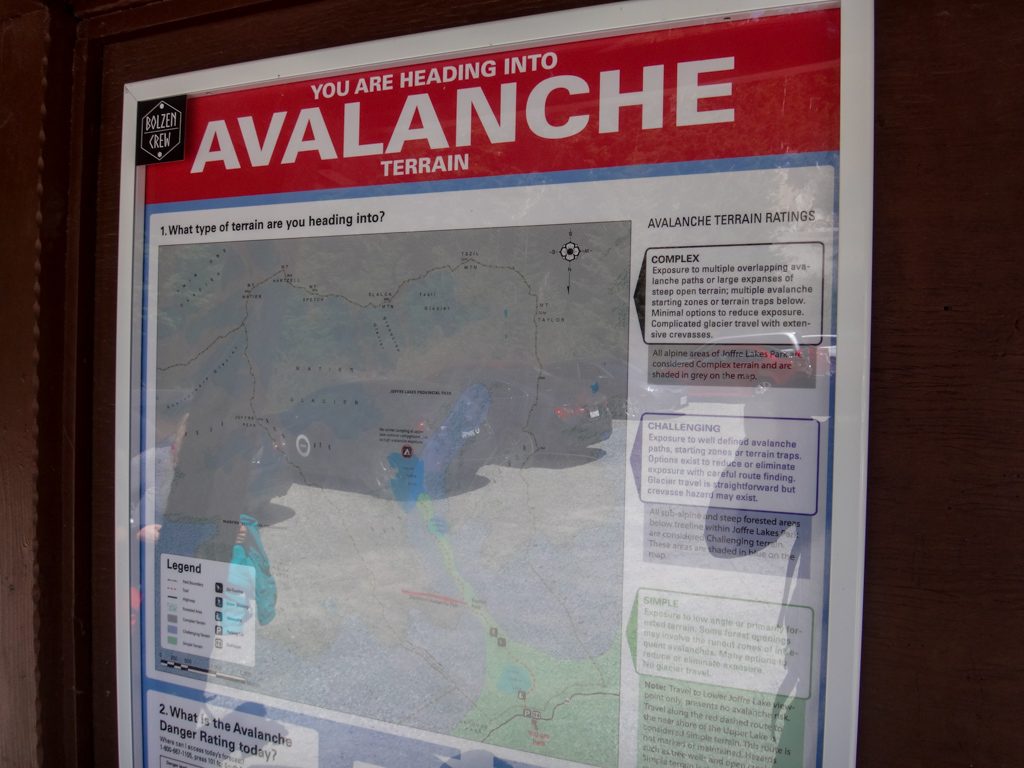 …but it can also be dangerous depending on the conditions. An avalanche had blocked roads around here only two weeks earlier.

It took us just over three hours to hike about eight kilometres, but we stopped frequently to take photos and admire the view. During that time we climbed just under 700 metres in vertical elevation.

Thanks Liz for agreeing to do this hike and sharing the memories with me.

Thanks also to our friends, Sharon and Leith for suggesting it.