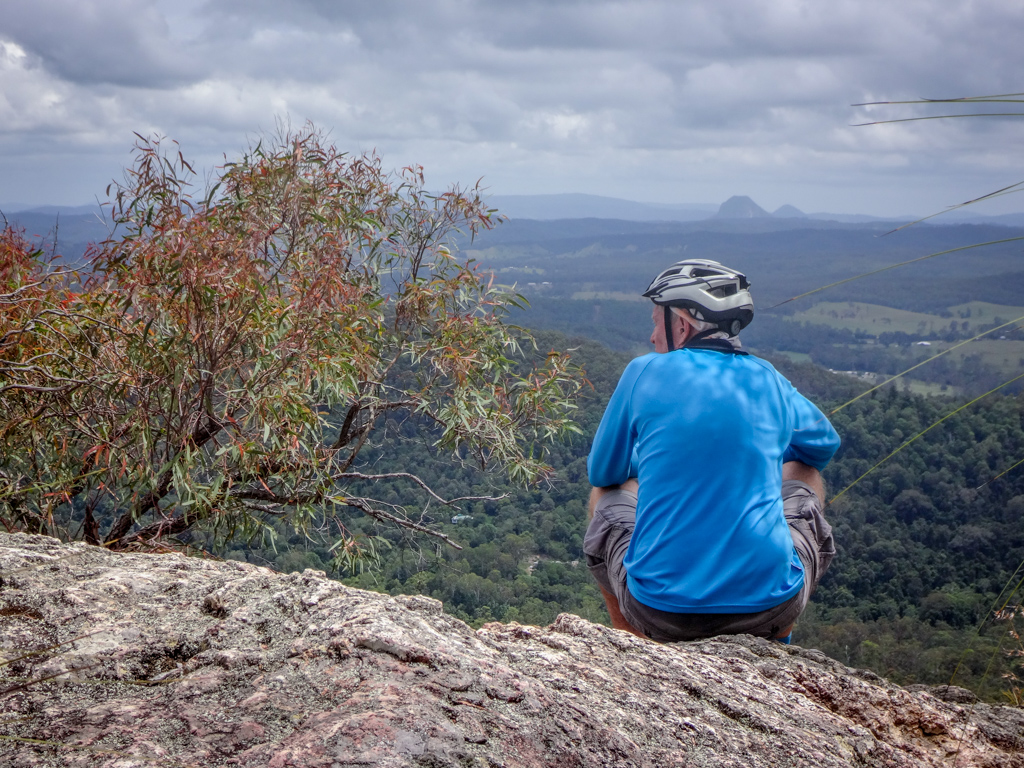 With its wonderfully long descent, and gruelling uphill climb, today’s ride through Mapleton National Park was the perfect place to prove the old saying: “What goes down must come up”. 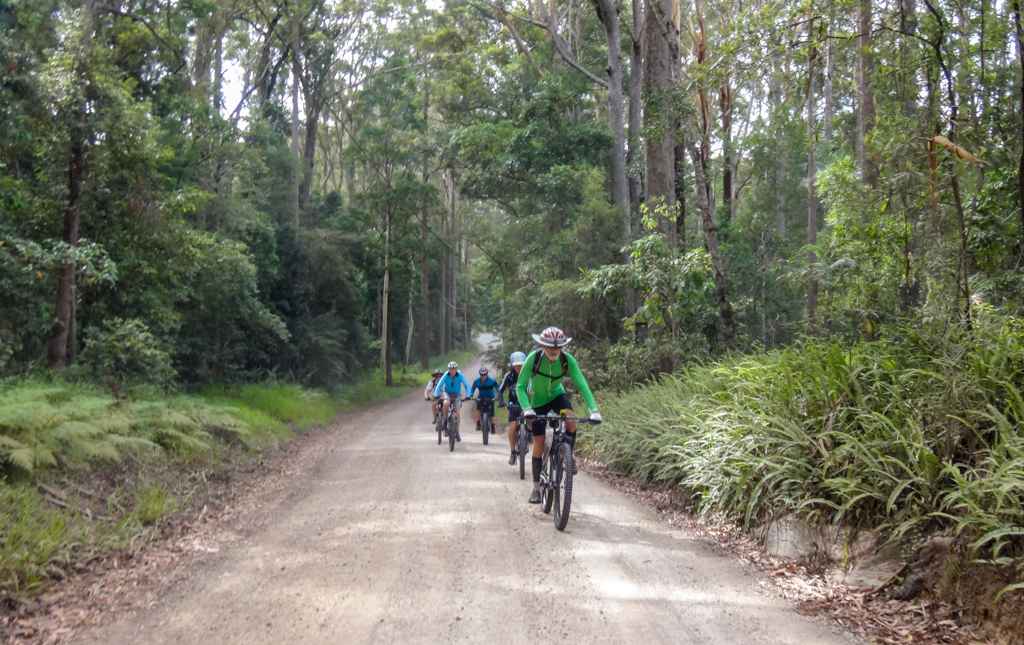 We started out by following Mapleton Forest Road through towering trees, and lush green ferns. 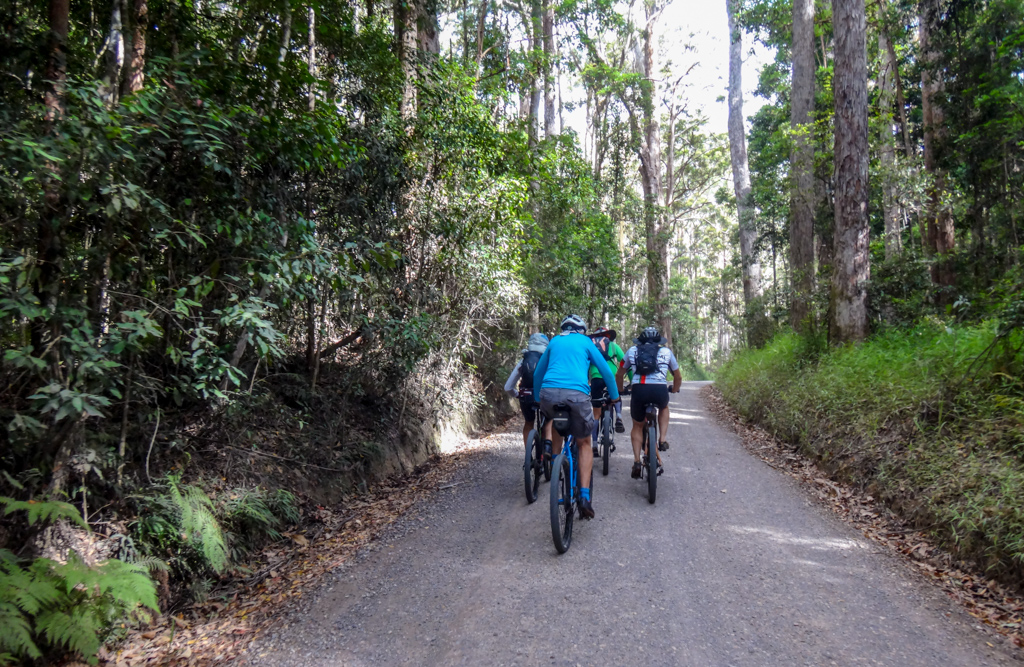 We enjoyed our previous visits here, but were mindful that we were on a ridge line.  Any turn to the left or right would eventually lead to a steep descent from the mountain range we were on.  Which would mean a lot of hard work later in the day. 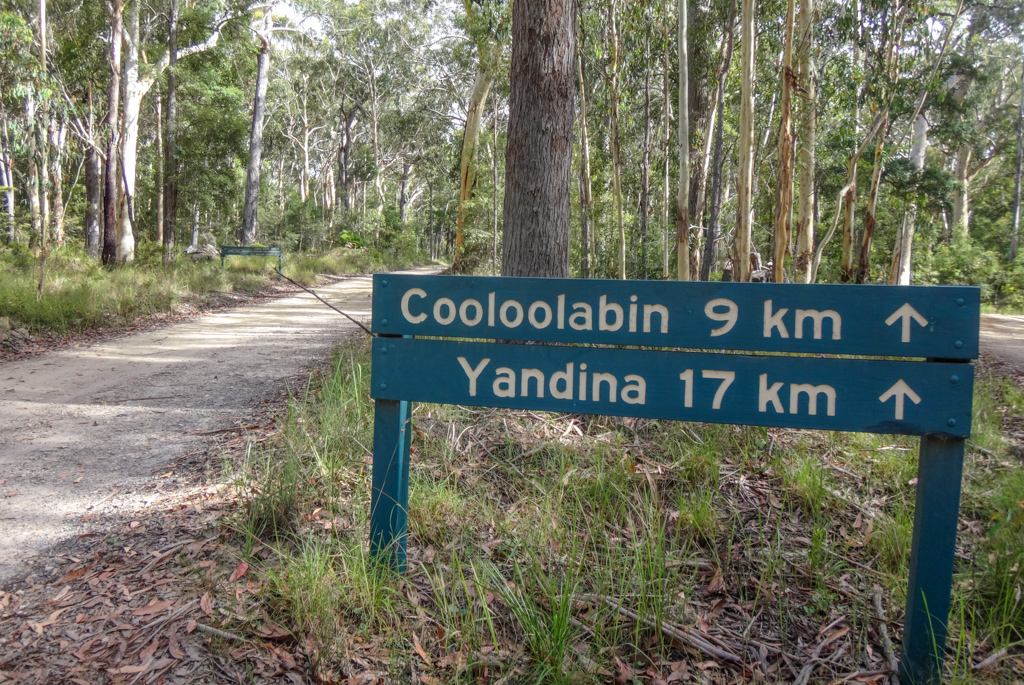 At a fork in the road we took “The Road Less Traveled” and turned left towards Cedar Creek. 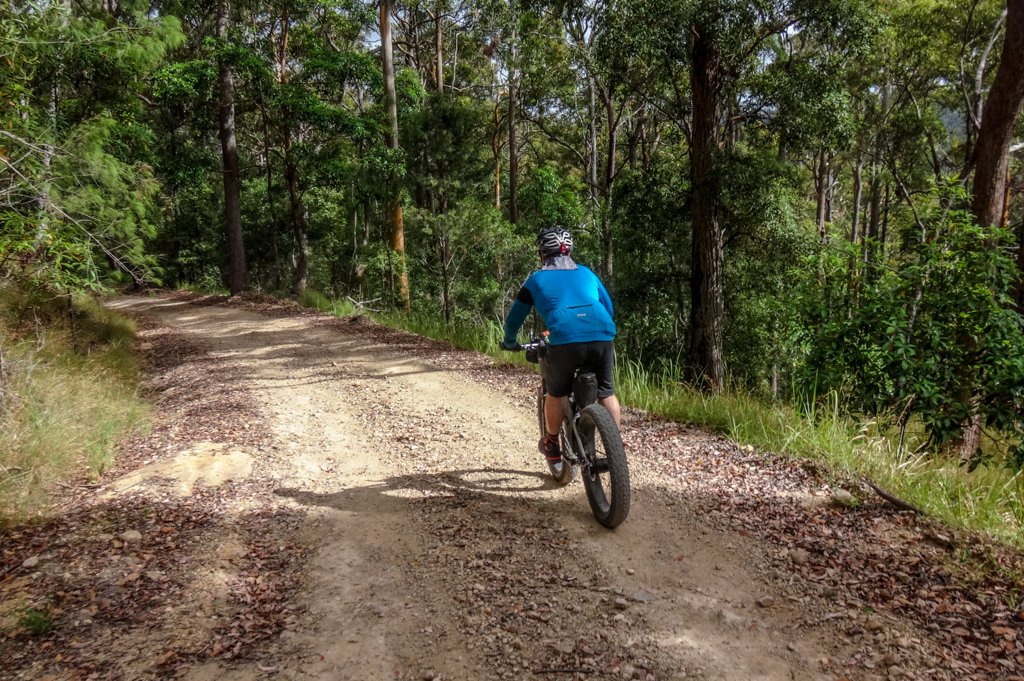 The slope grew sharper as we accelerated down the hill.

Our bikes bumped frantically over the rocky track while trees rushed by in a blur of green.

I grinned stupidly, and held on tightly. 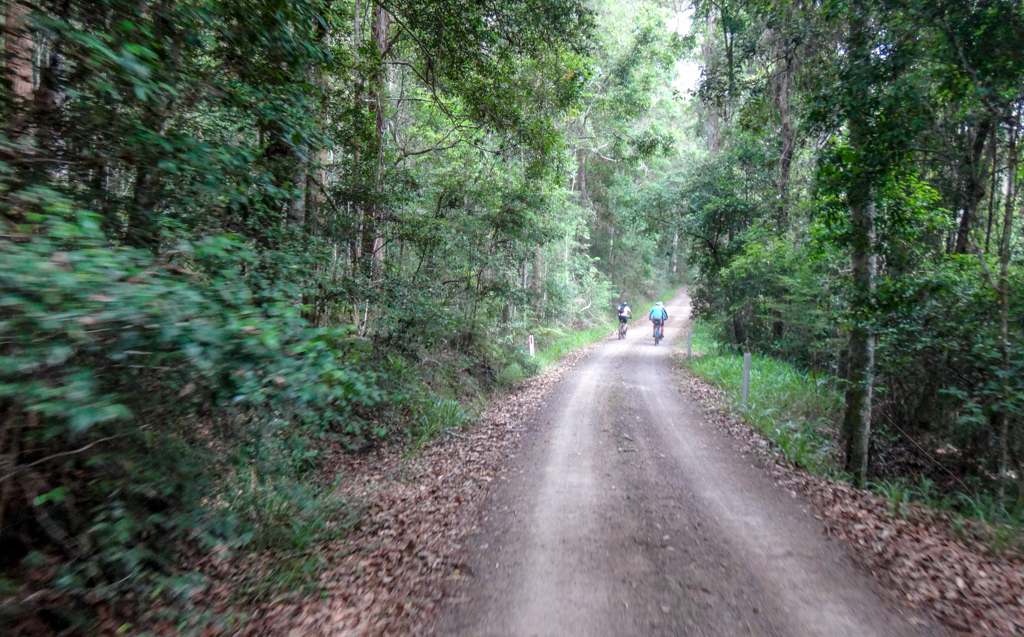 A few intense minutes later we emerged at the top of the Cedar Creek Valley – a hidden gem of a place tucked tightly away in the folds of the Blackall Range. 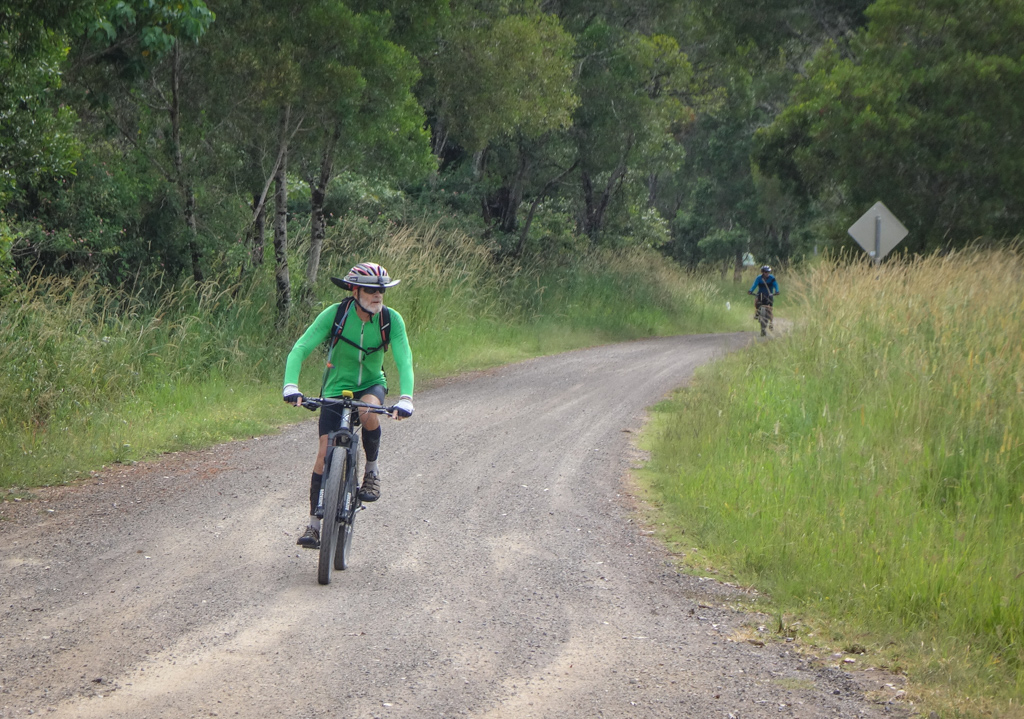 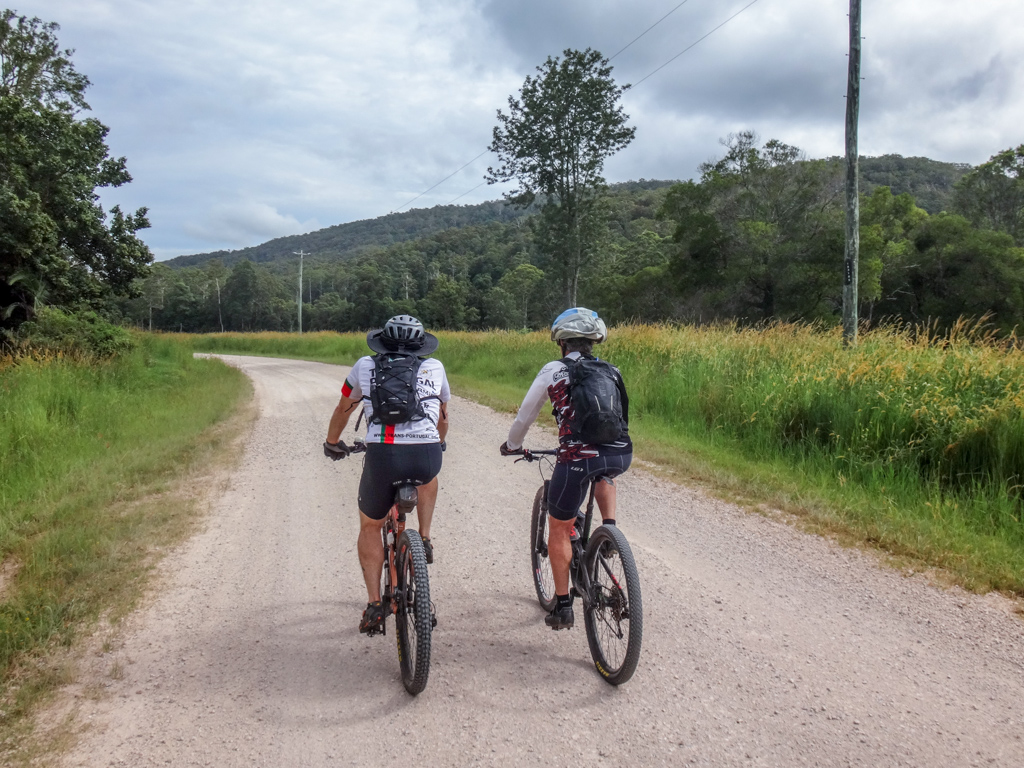 We followed the gravel road slowly down the valley. 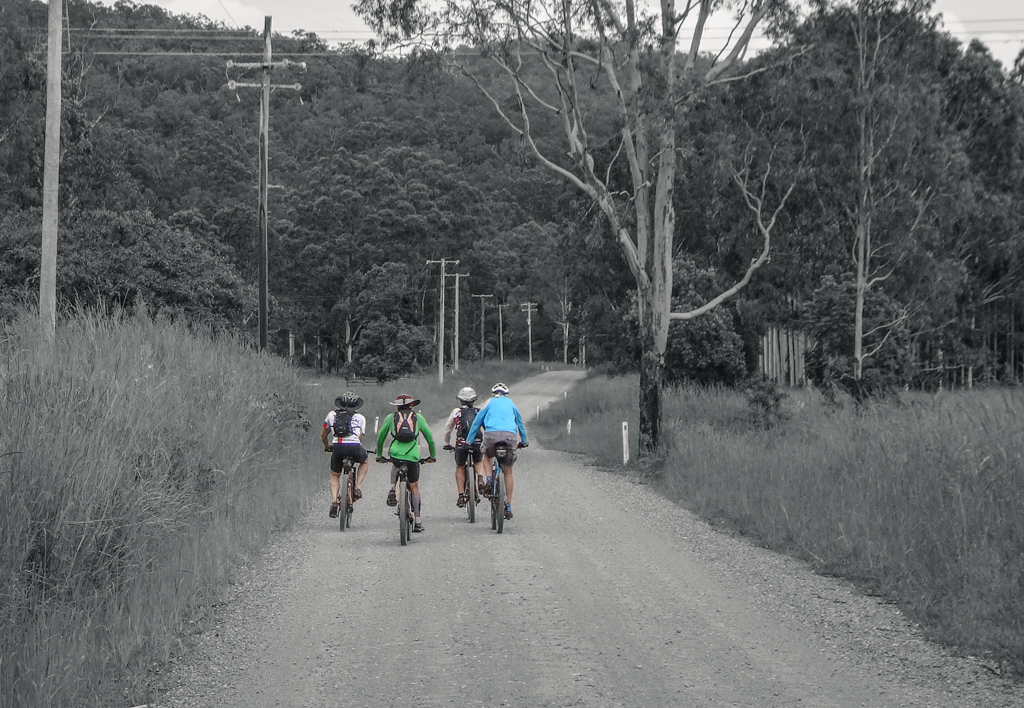 I knew what lay ahead, and relished the relative ease while it lasted. 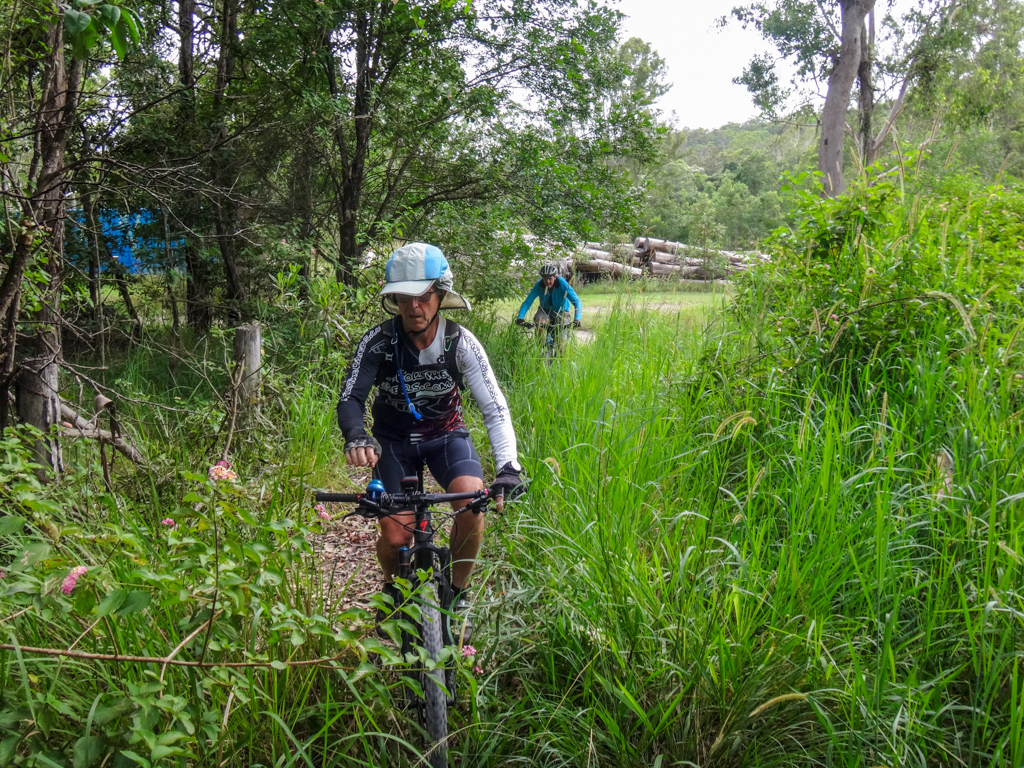 After a few kilometres we left the road and bashed through overgrowth to a national park gate. 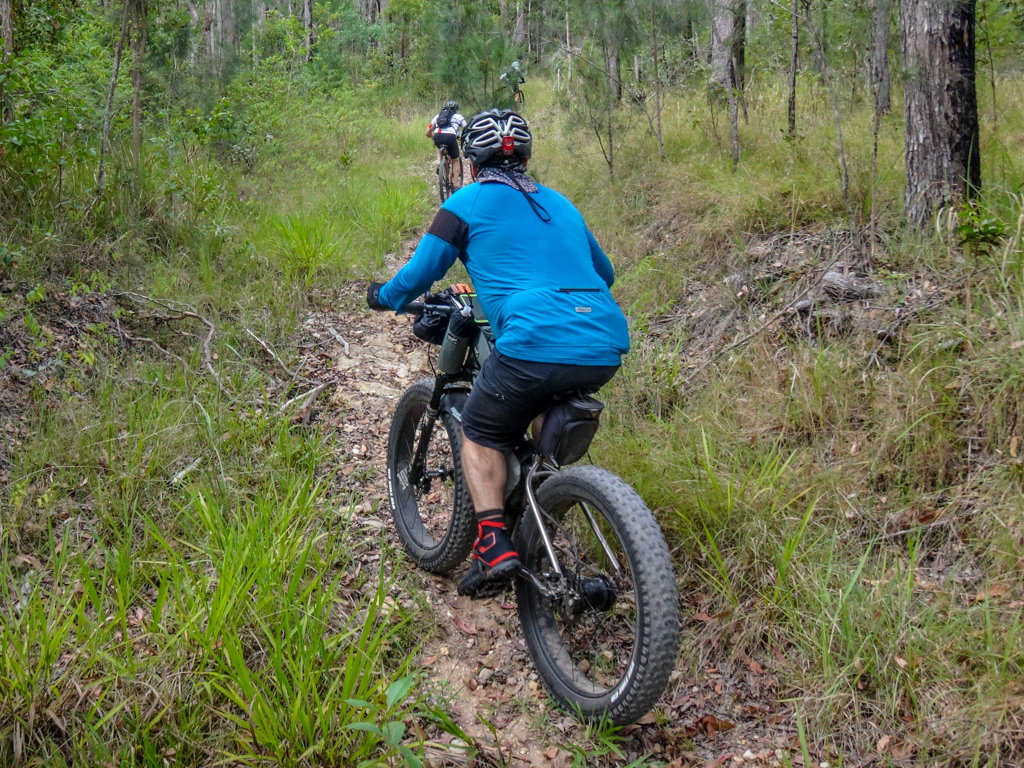 The track started off steeply.

We clicked down a few gears and pedaled hard.

But no gear was low enough for this slope.  It was rough, slippery and steep. 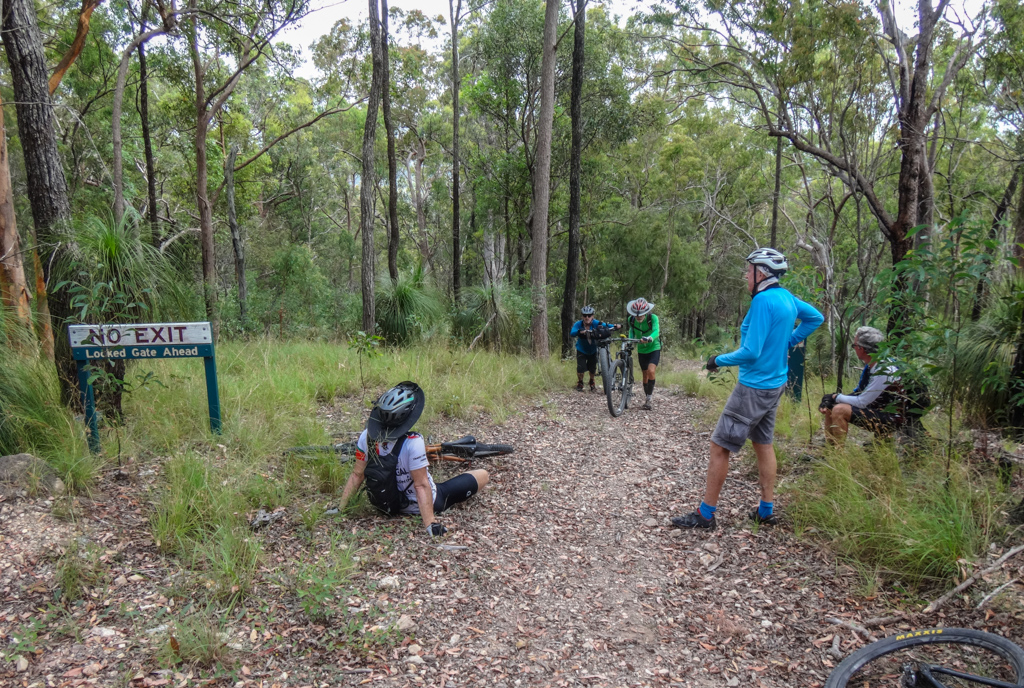 The track ended at a T-junction.  To the left was a tempting-looking downhill track.  To the right was yet more monster climbs… 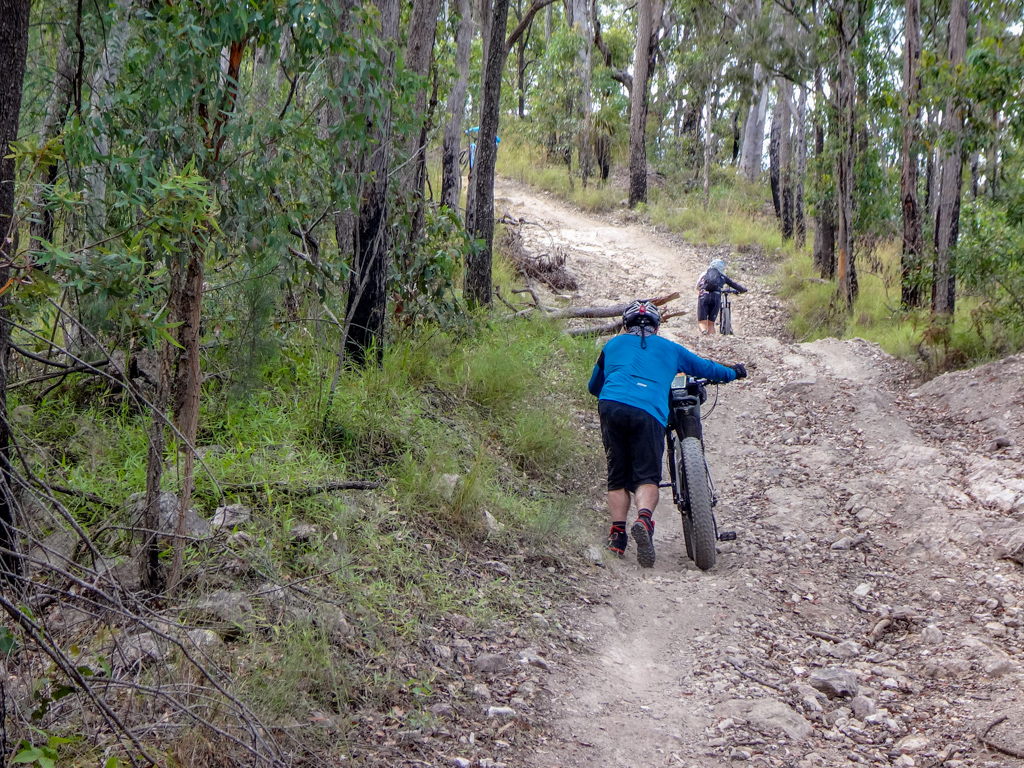 Thankfully, all hills have a summit.  Eventually we reached the top, mounted the bikes, and continued past lush ferns in the welcome shade of the forest.

The track ended at Oaky Creek Lookout, at the end of a long ridge, with sweeping 270 degree views from the Mary Valley to our left to Cedar Creek on our right. 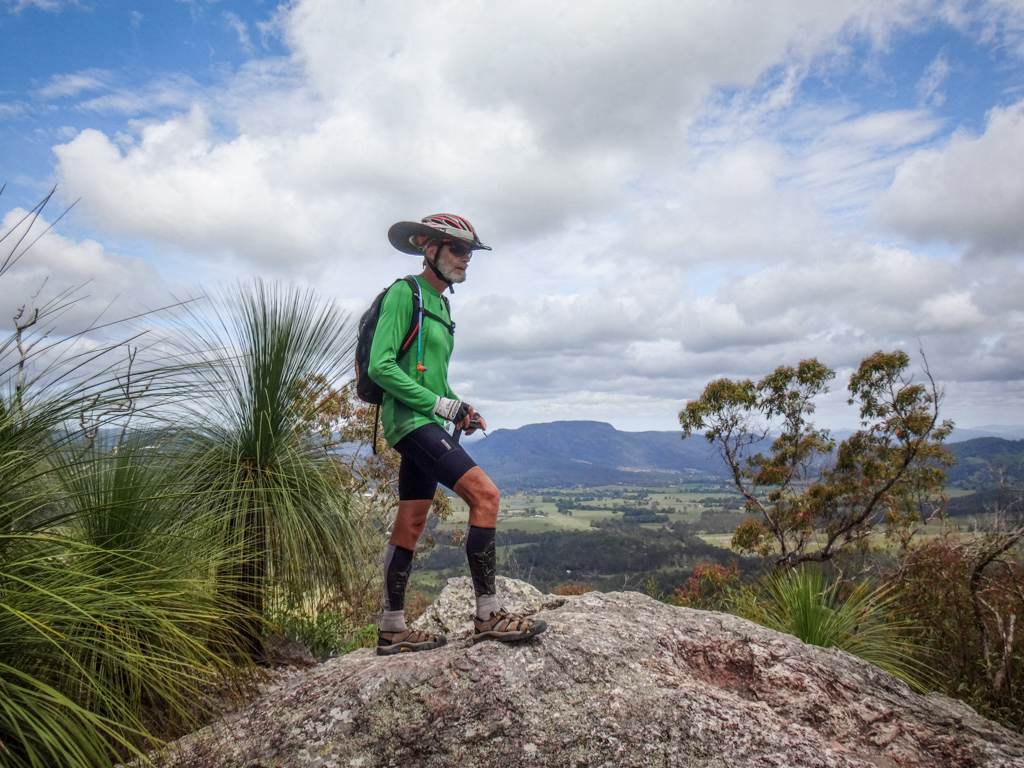 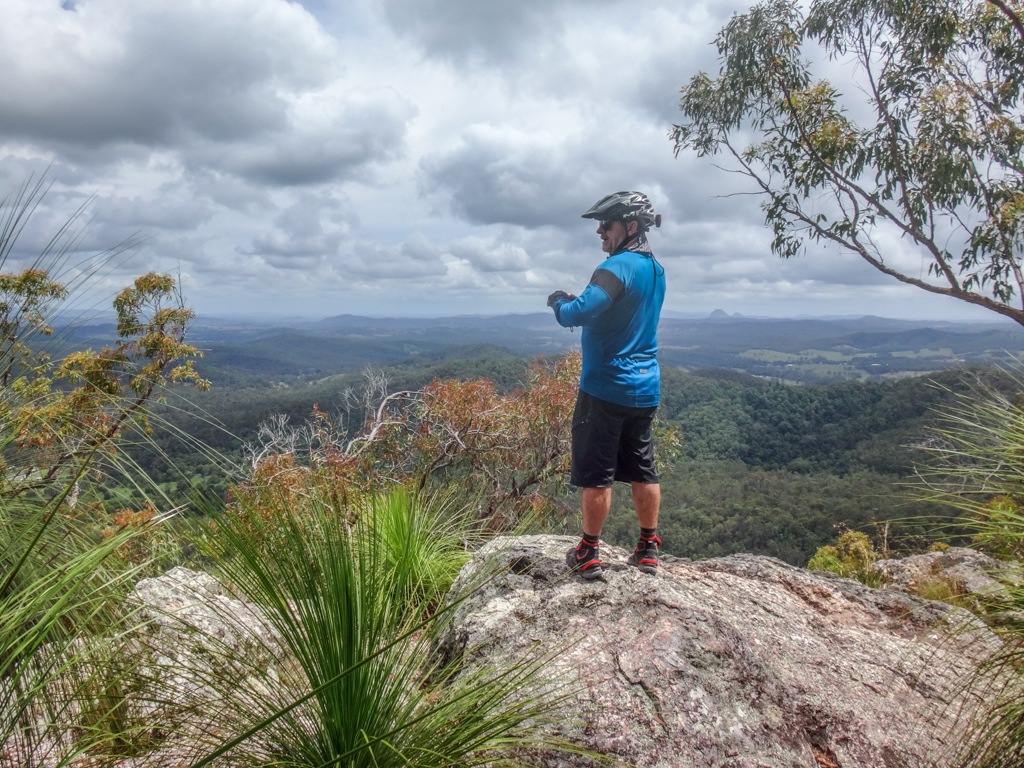 We sat on the rocks, gazed out at the panorama, and enjoyed the short break. 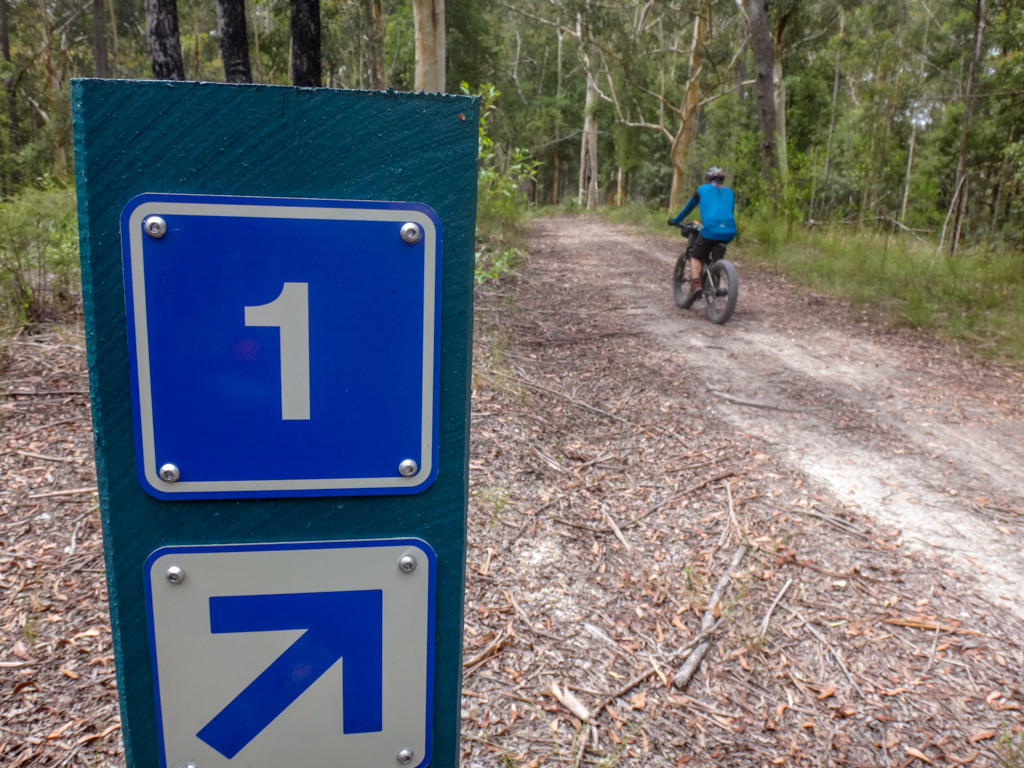 Returning from the lookout, we followed the ridge-line track back towards Mapleton.  It was clearly marked with friendly signposts, so there was little chance of getting lost. 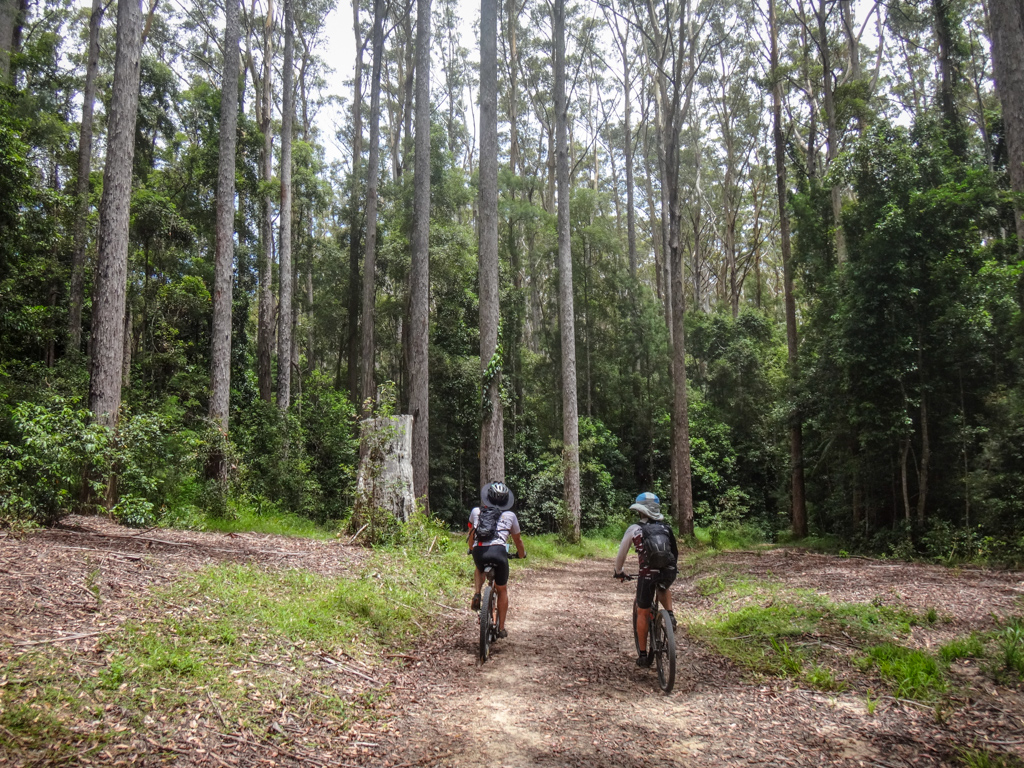 As we neared the end of our ride, Jason suggested following a few more tracks through the thicker part of the forest. 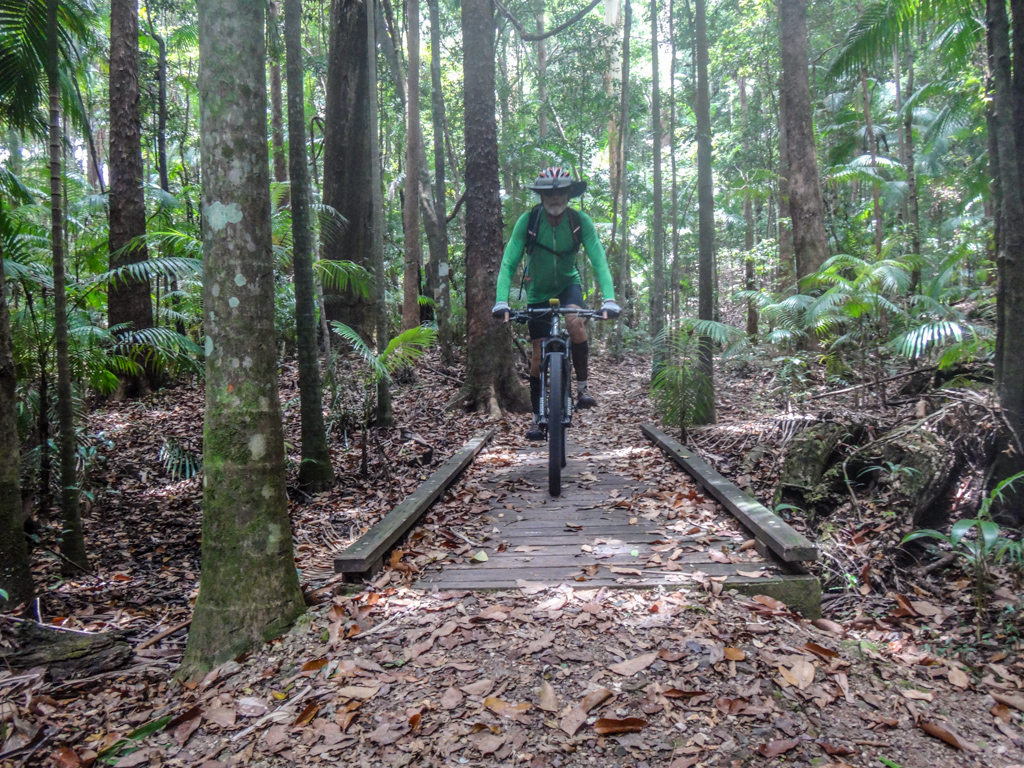 We entered another world.

The narrow tracks twisted tightly through the rain forest and over creeks.

The temperature dropped a few degrees.

We followed the snaking track around huge fallen trees, over a thick carpet of dead leaves as we made our way back into town.

We rode just under 35km in about four hours.

During that time we climbed about 1,000 metres in elevation and I burned about 2,000 kcal.

Despite its short distance, this is a tough ride – especially in summer.

Thanks Darb, Eric, Calum, Jason and Paul for a great day out.

I love our rides 🙂