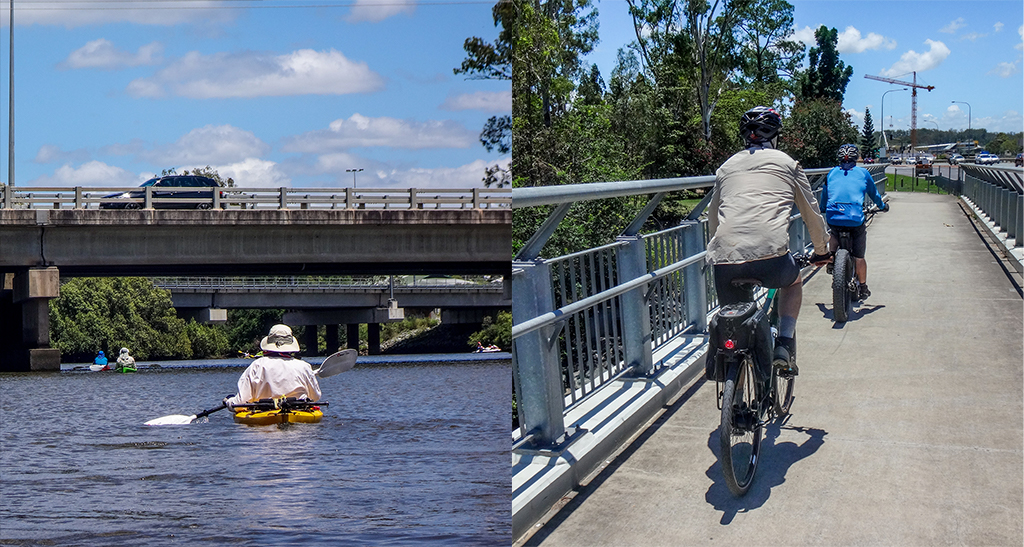 Today’s adventure involved kayaks and bikes as we traced out a large loop around the North Pine River and Redcliffe. 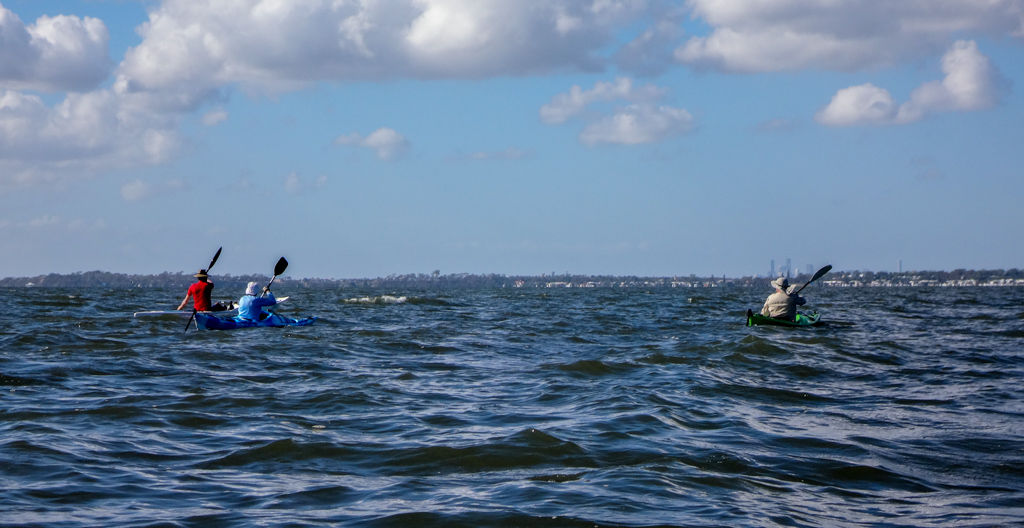 We started at Clontarf on the south-western tip of the Redcliffe Peninsula, and set out across Bramble Bay with the tide and wind at our backs.

We were paddling up-river on an incoming tide.  We’d be paddling with the current, which would make our journey much easier.

The downside was that the tide was still low, so we had to take care to not run aground on sand banks. 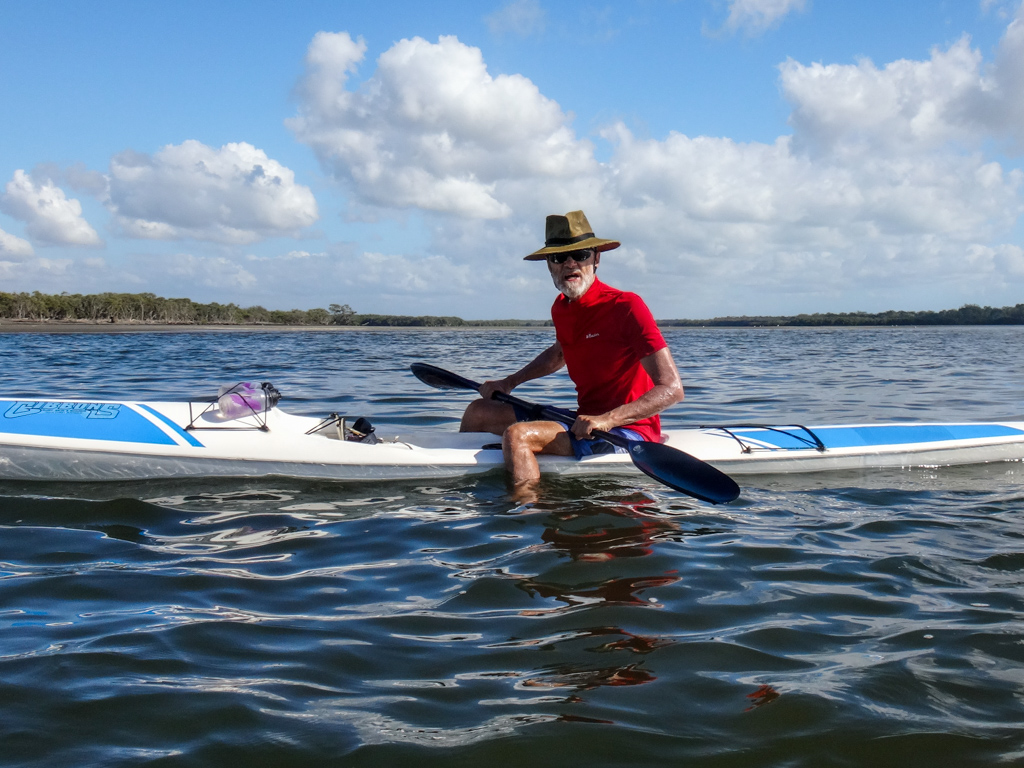 My friends had long sleek boats that cut through the water.

My kayak was short and fat: nice and stable for an inexperienced paddler like me, but slower.  Thankfully we took our time, and everyone waited patiently for me to catch up.

The incoming tide, and easterly breeze helped push us up the Pine River, as we left the bridges behind. 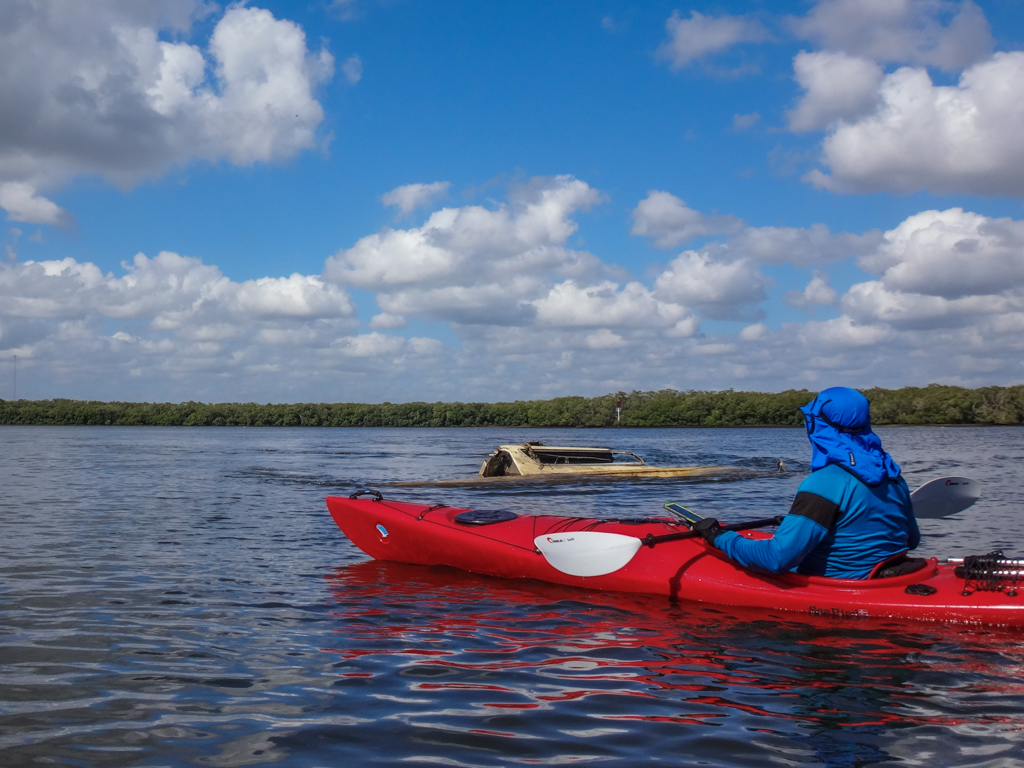 The strength of the current became apparent as we floated pas a submerged wreck. 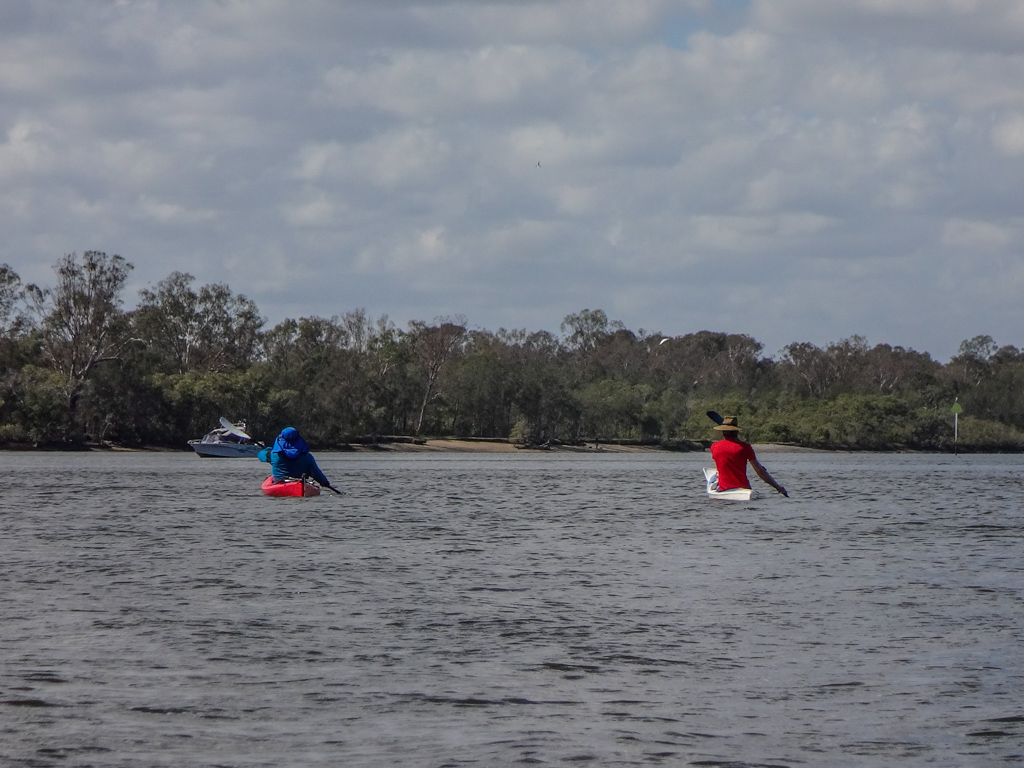 On our port side (I’ll let you guess which side that is) lay Deepwater Bend. 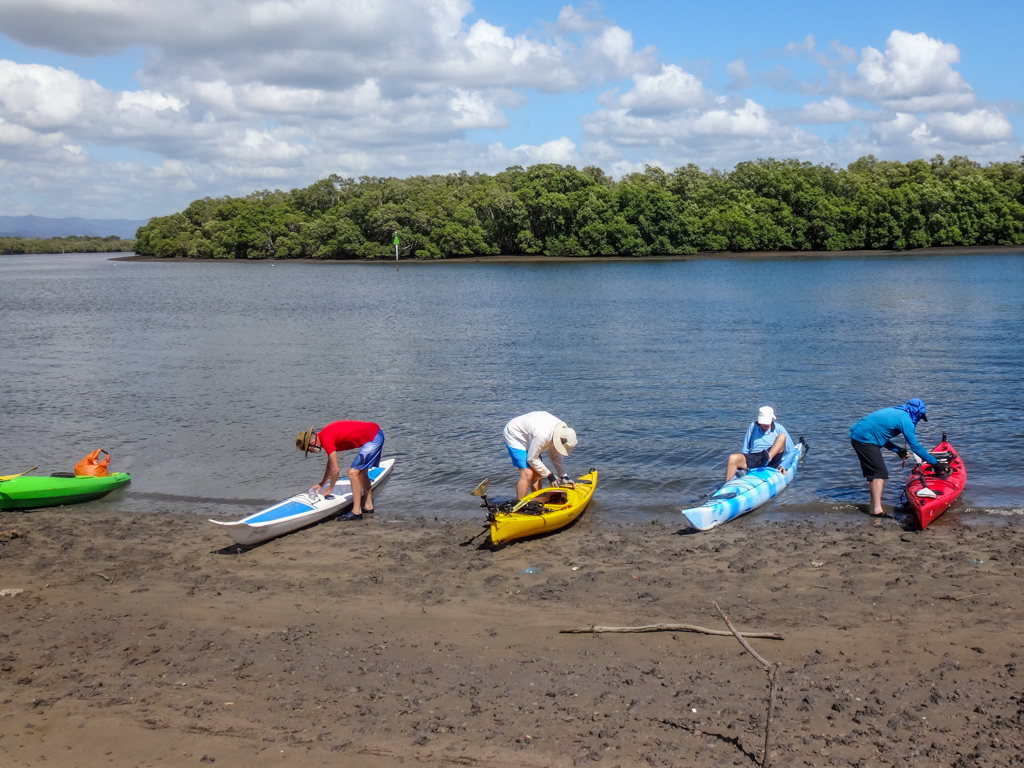 We’d been paddling for about an hour, so decided to pull our vessels ashore and have a short break. 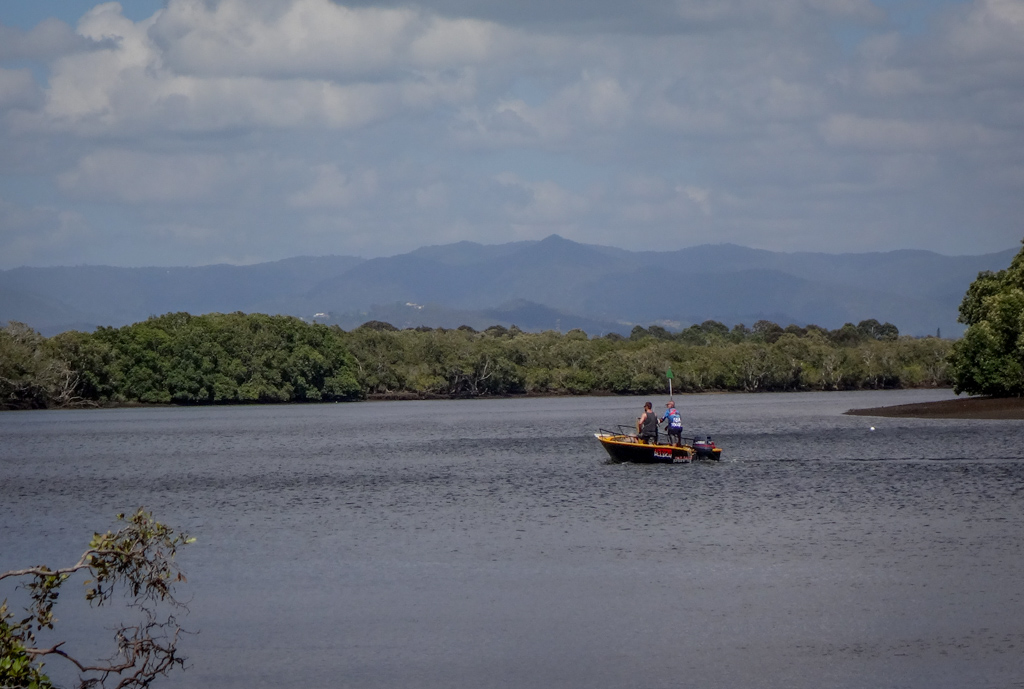 On the horizon lay the unmistakable triangular peak of Mount Samson, jutting above the D’Aguilar Range.  I often look at this range and imagine our tyre tracks all over its shady trails.

We’ve had a lot of fun in those mountains!

Our short rest stop over, we continued our paddle upstream past Deepwater Bend… 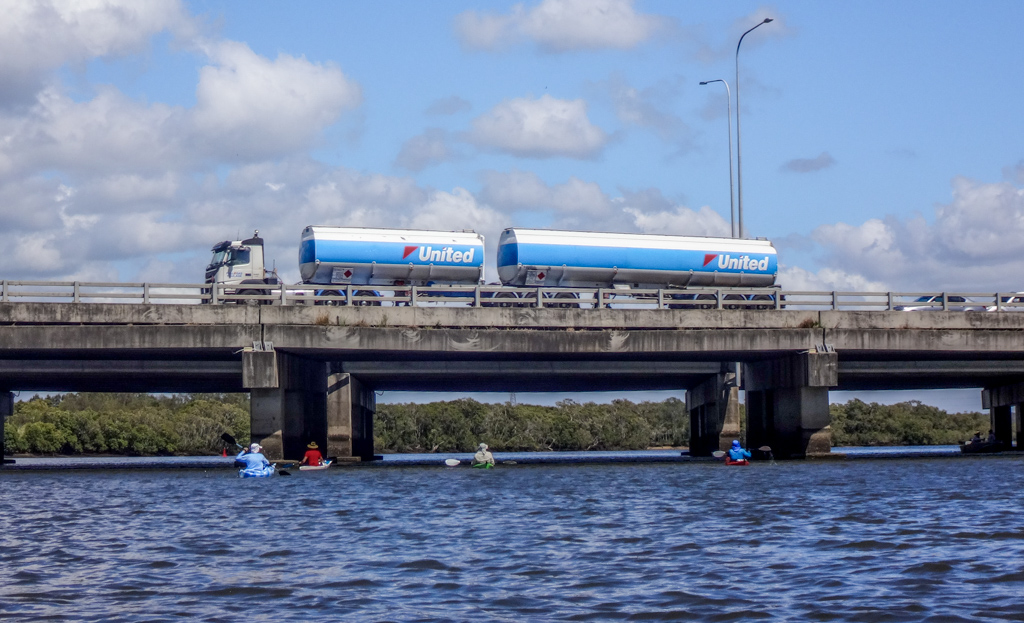 …and under the Pine River bridge on the Bruce Highway. 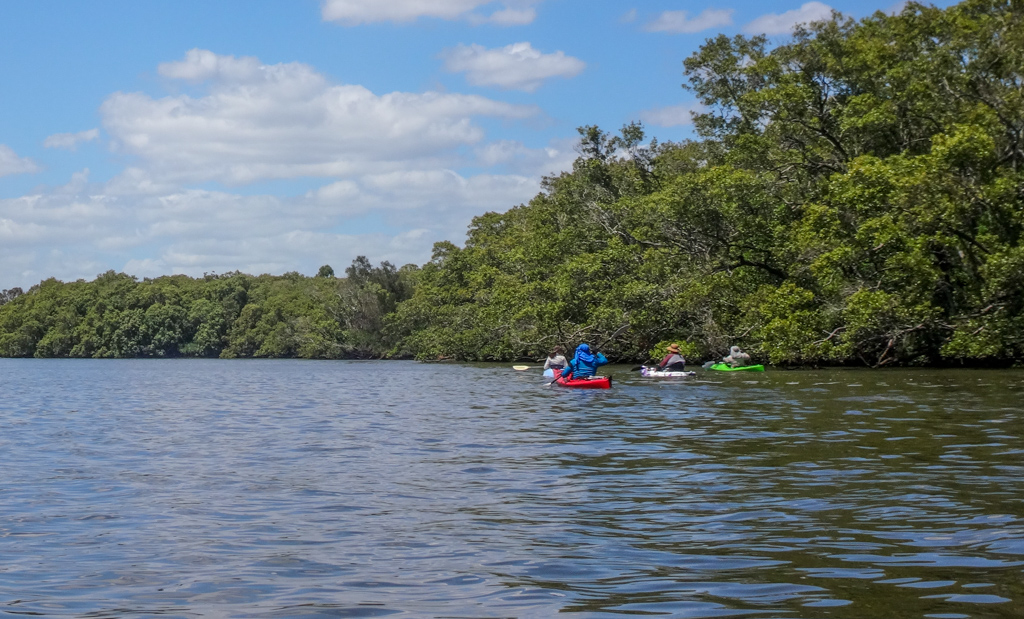 The river split in two at this point.

To our left, the South Pine River twisted slowly away to its headwaters on the slopes of Mount Glorious.

The North Pine River lay ahead.  We followed.

Despite the assistance from the elements, my shoulders felt tired and sore. 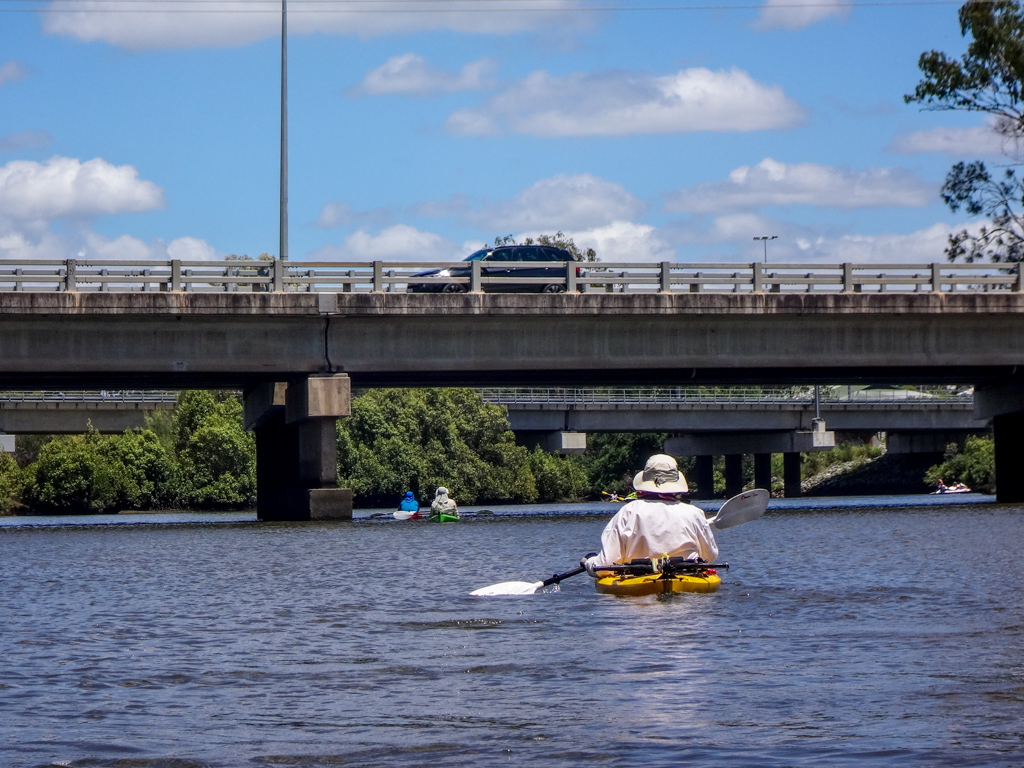 We floated under our road of the day – The A J Wyllie Bridge between Petrie and Lawnton.

We had come about fifteen kilometers.

Not long now,” I said to my mates.  Half to encourage them – half to myself. 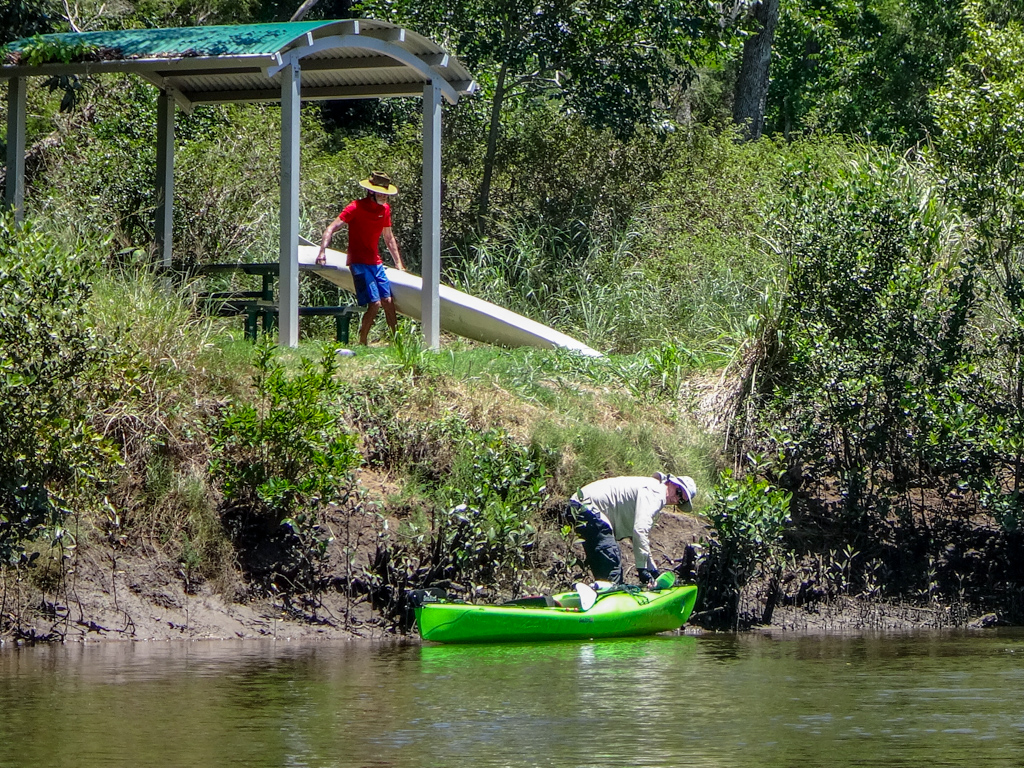 We came ashore at Stephen Lawn Park in Lawnton.

The park is named after the man who owned the land on which Lawnton Railway Station was built.

Stephen Lawn was a blacksmith from Yorkshire.  During the Gympie gold rush of the 1860’s, travelers would stop at his Wheelwright  and Blacksmiths Shop on Gympie Road for repairs. 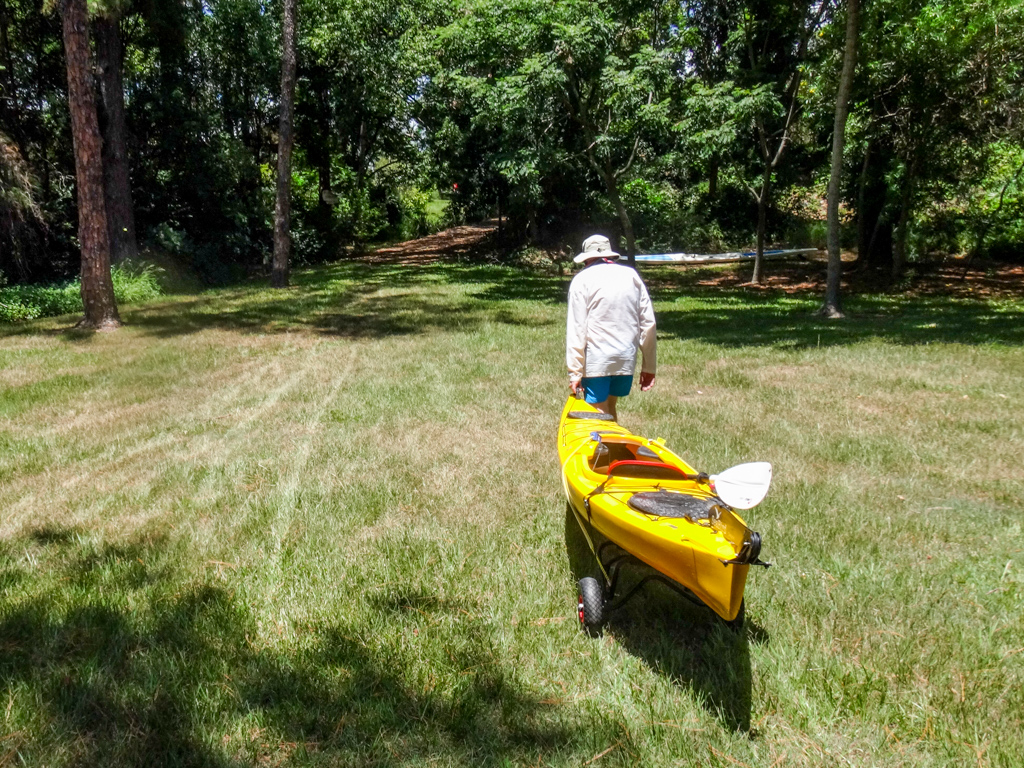 We had no need of a wheelwright today.

We lifted the boats onto trollies, then hauled them through the park, and down the street to my place. 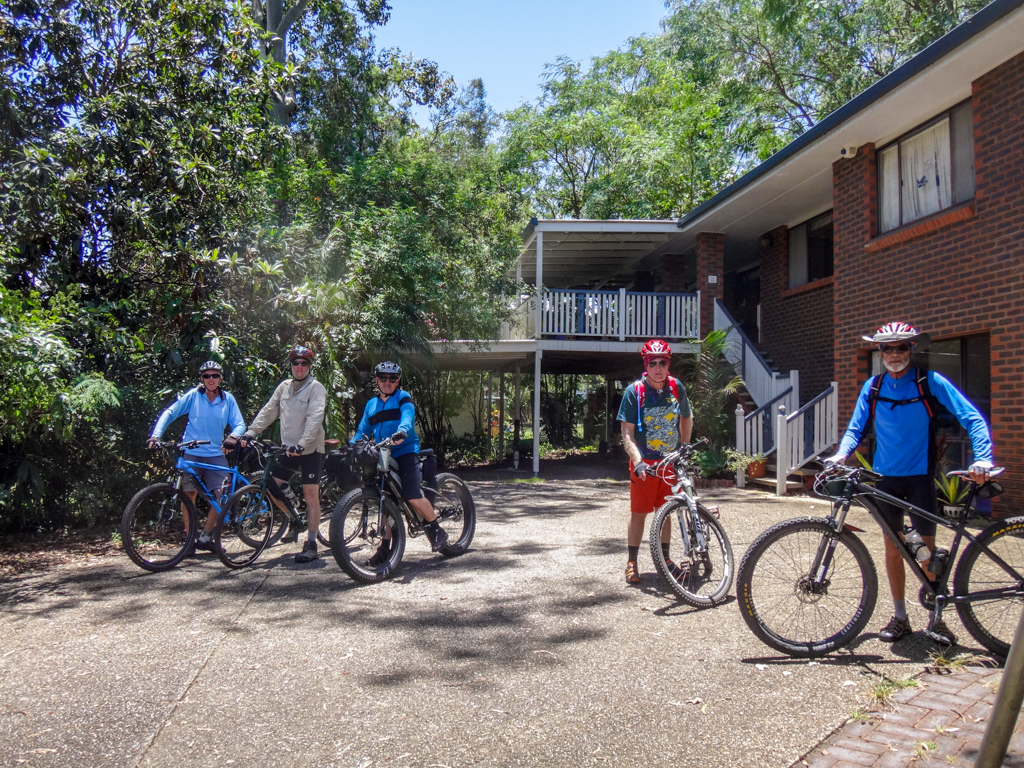 After a quick break, we stowed the kayaks, donned our cycling gear, and set off back to Redcliffe for the second half of our adventure. 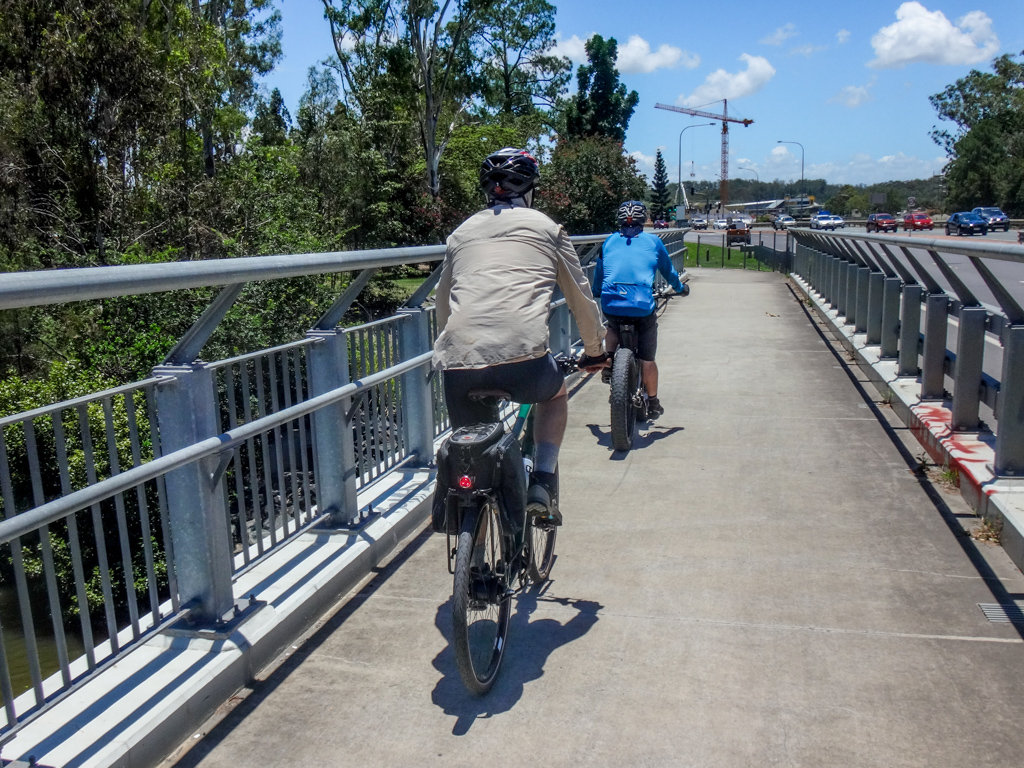 “Gee this is easier than paddling” I said to Adam as we rolled over the bridge that we’d paddled under half an hour ago. 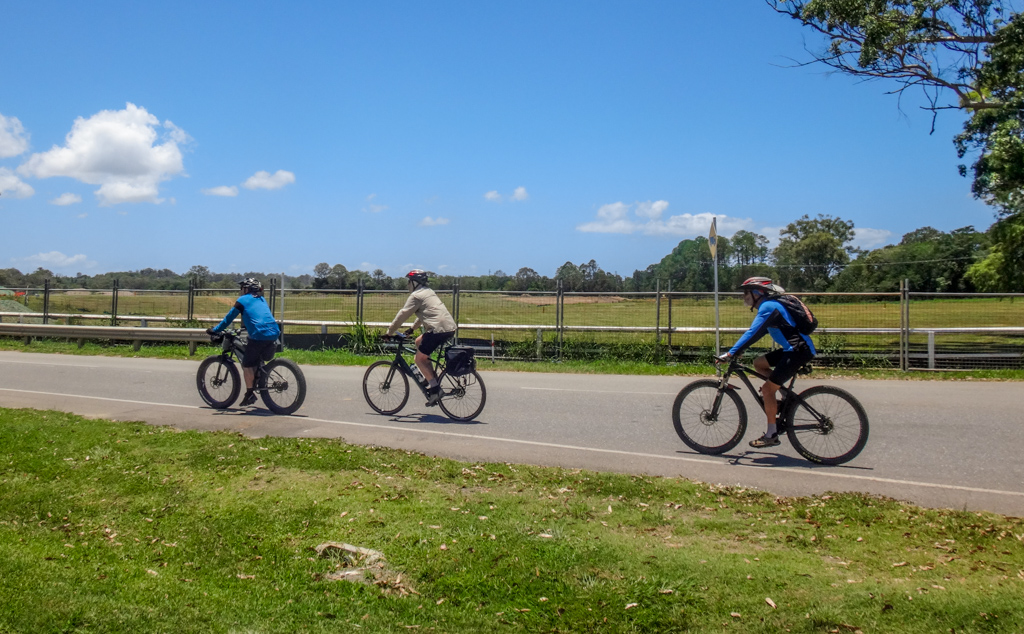 For most of the trip back to Redcliffe we followed the bike path adjacent to the Kippa Ring railway line. 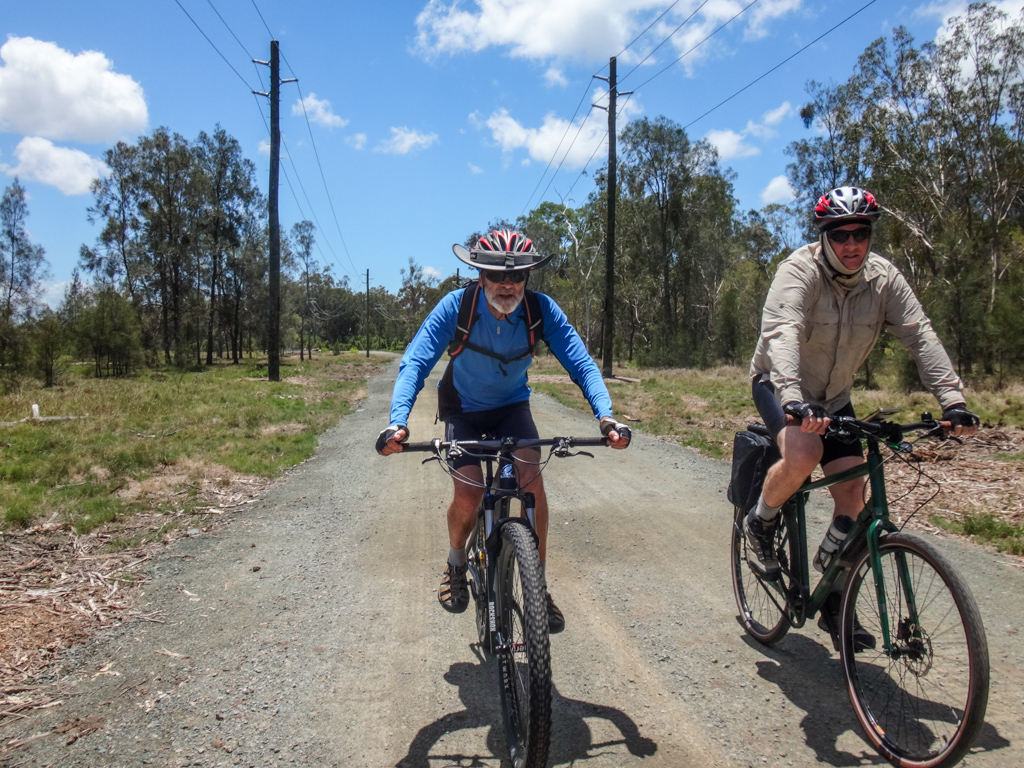 But it wouldn’t have been a real “ride” unless we spent some time on dirt, so we were happy to eventually leave the bike path and follow a gravel track through Hayes Inlet. 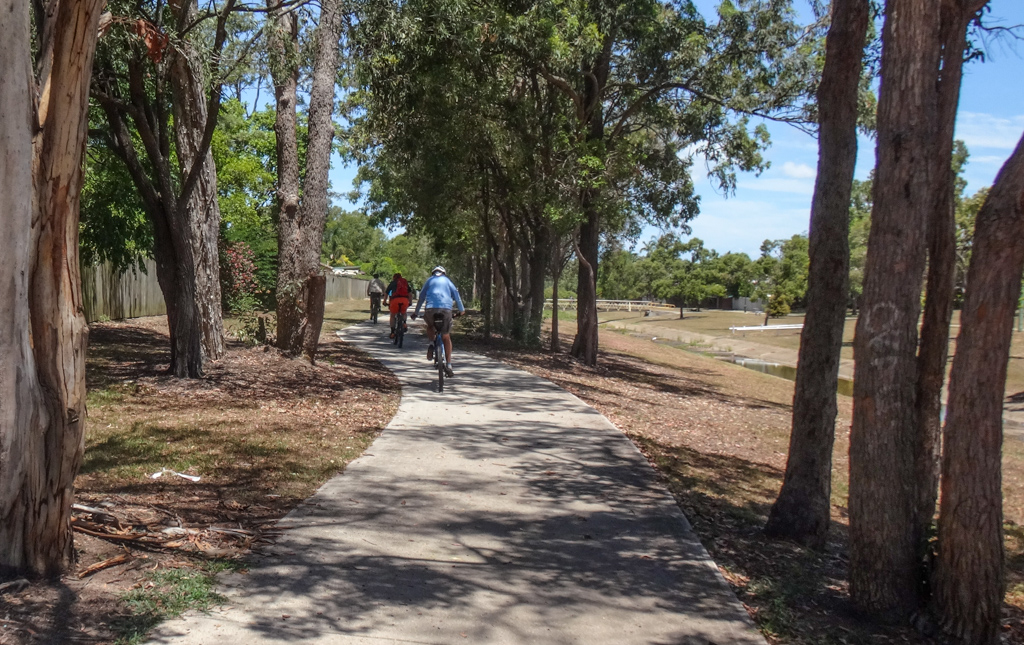 At Clontarf we continued along a shady bike path through quiet parks towards the water. 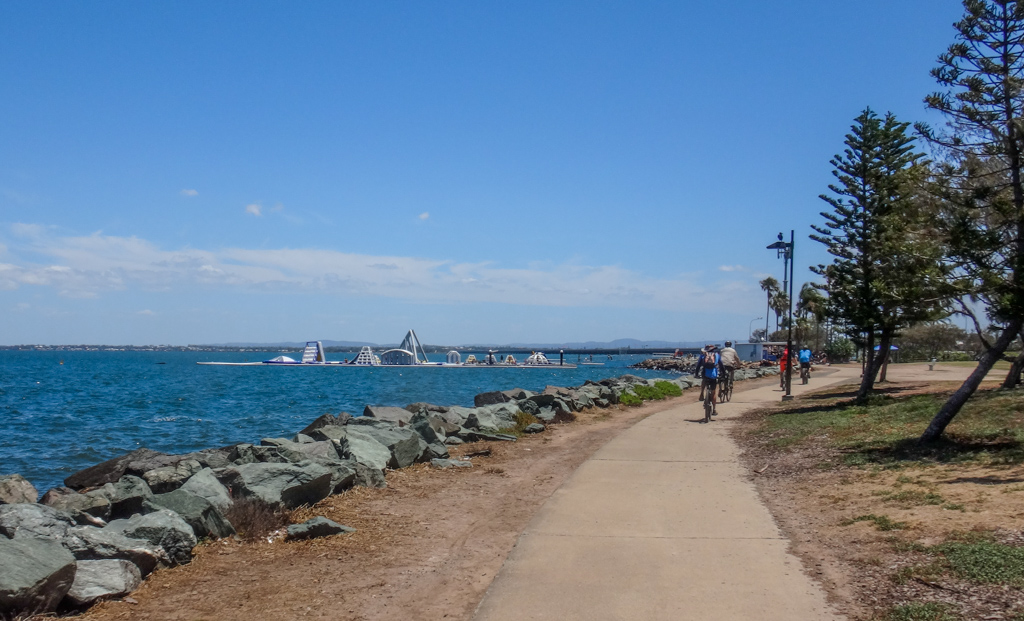 The sun was now high, and a stiff breeze blew across the bay.

It was a glorious day, but I was glad we had completed our “paddle” earlier in the morning

We traveled about forty-two kilometres in about five hours.

The half on water took us three and a half hours.

The second half took about ninety minutes.

The paddle was hard work – I’d rate it about 8 out of 10 on the tough-o-meter.  This section is always best done in the morning and on an incoming tide.  In other conditions it would be much more uncomfortable.

The ride was easy and rates a leisurely 4 out of 10 on the tough-o-meter.

Thanks Darb, Calum, Adam, Paul and Stephen for an unusual fun adventure! 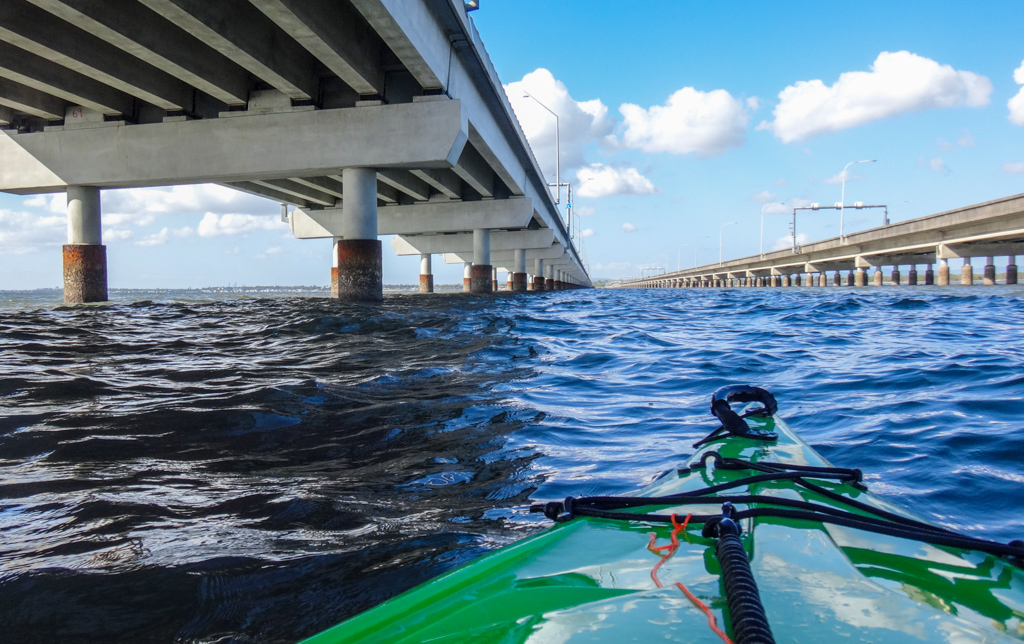