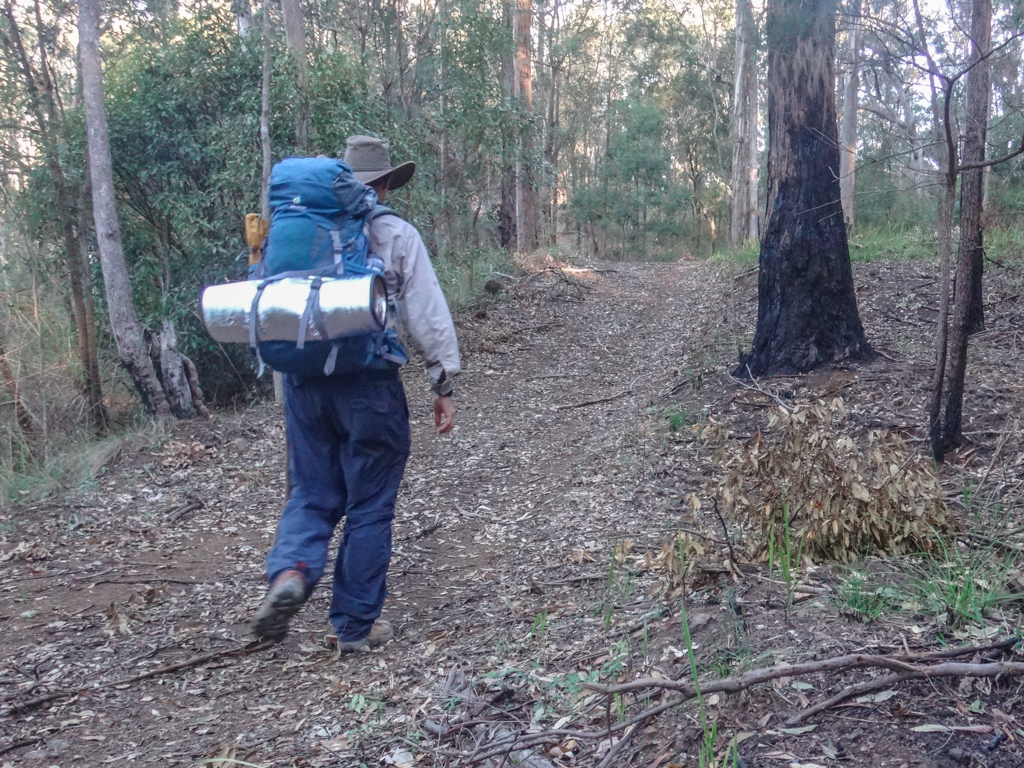 I’ve never done a solo hike and camp-out before. Today I thought I’d see what it was like. 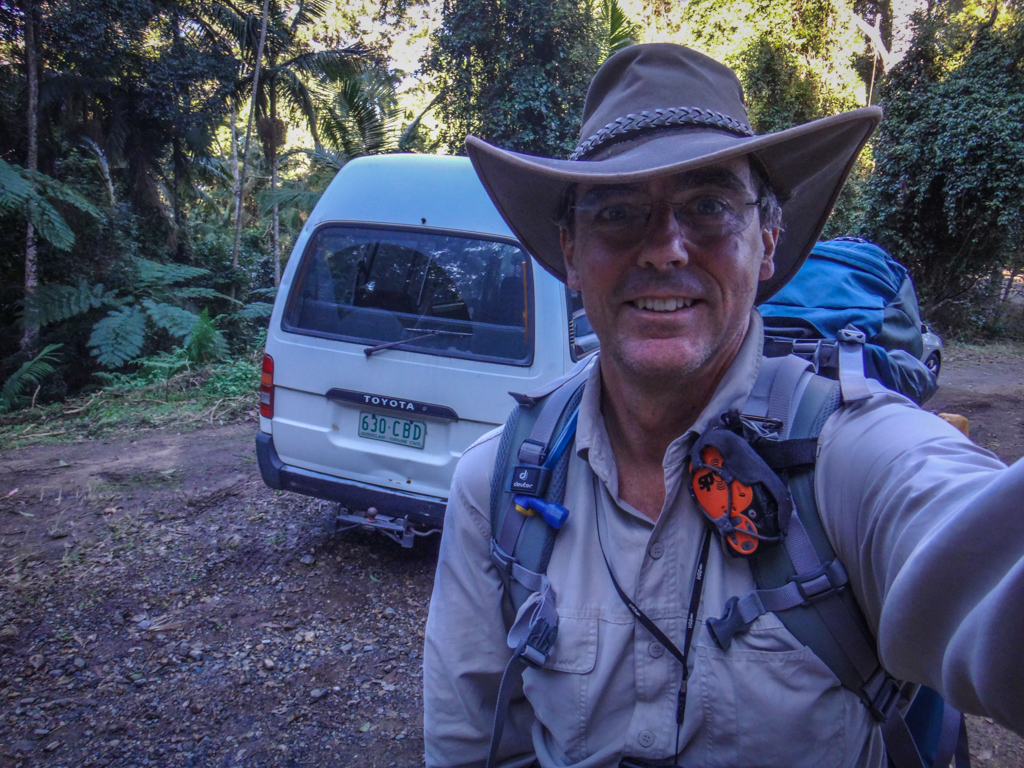 A while ago my friends and I rode our bikes down some stupidly steep tracks to Middle Kobble bush camp in D’Aguilar National Park. Today I left the bike at home, loaded up my brand-new backpack (way too heavily) and did the 5km trip on foot.

I was greedy for outdoor fun. Having already spent the morning riding my bike with friends at the Glasshouse Mountains, I was pleasantly tired. But as the afternoon sun slipped slowly down the afternoon sky, I parked the car at the entrance to the Lepidozamia track on Northbrook Parkway, and decided I’d do my best to get to the camp site before sunset. 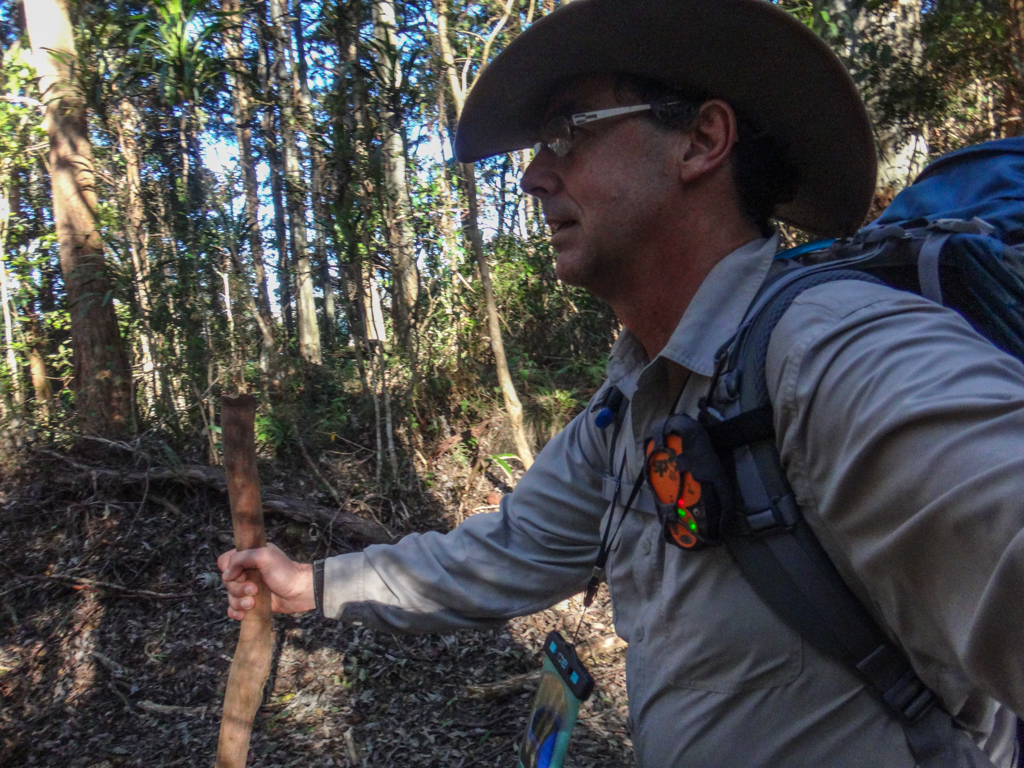 This wasn’t a leisurely stroll. I had a deadline. With a large straight branch to steady me on the slippery slopes I marched down the Lepidozamia Track through the rainforest towards Middle Kobble Break.

Normally when I walk on dirt my feet drum out a comforting even “one-two one-two” rhythm on the ground. Today with this makeshift staff gripped tightly in my hand, it was more of a lop-sided waltz: “one-two-and-a-half one-two-and-a-half” as my feet slapped the ground followed closely by the end of the stick.

The pack weighed in at a hefty 15kg. My scrawny cyclist shoulders weren’t used to this sort of load. I pulled the waist-strap of the pack as tight as I could, and kept marching. 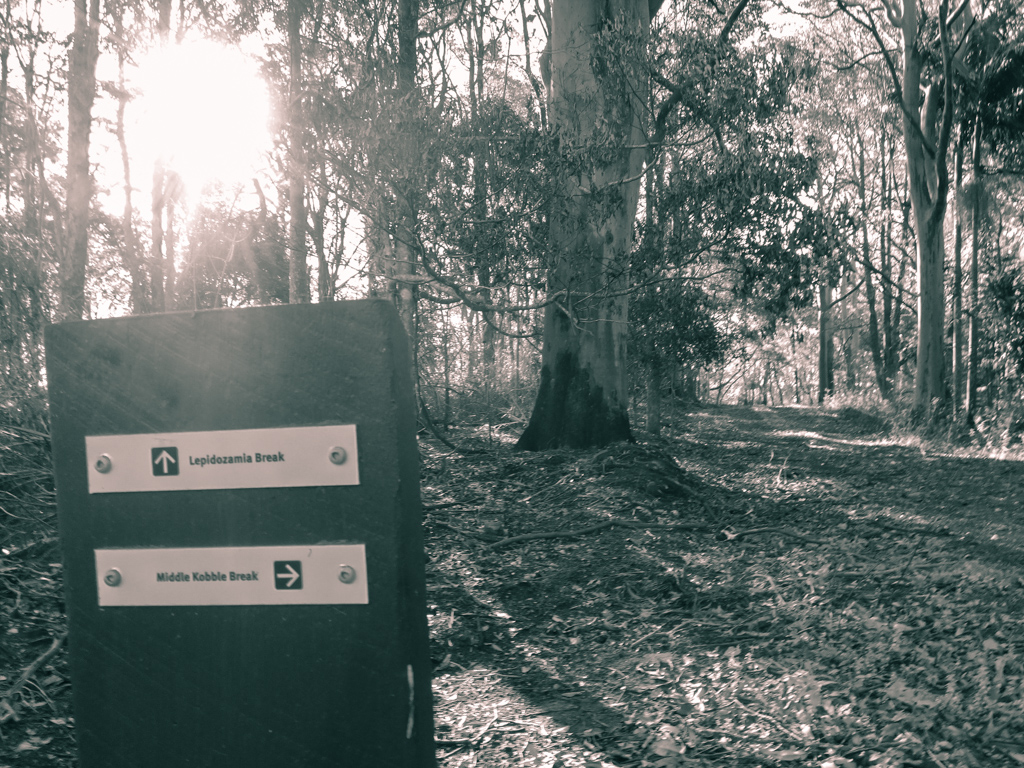 The intersections were well-marked. My “P” shaped route followed a clockwise loop. I passed the track I’d be coming up tomorrow and kept walking down “The Lep”. 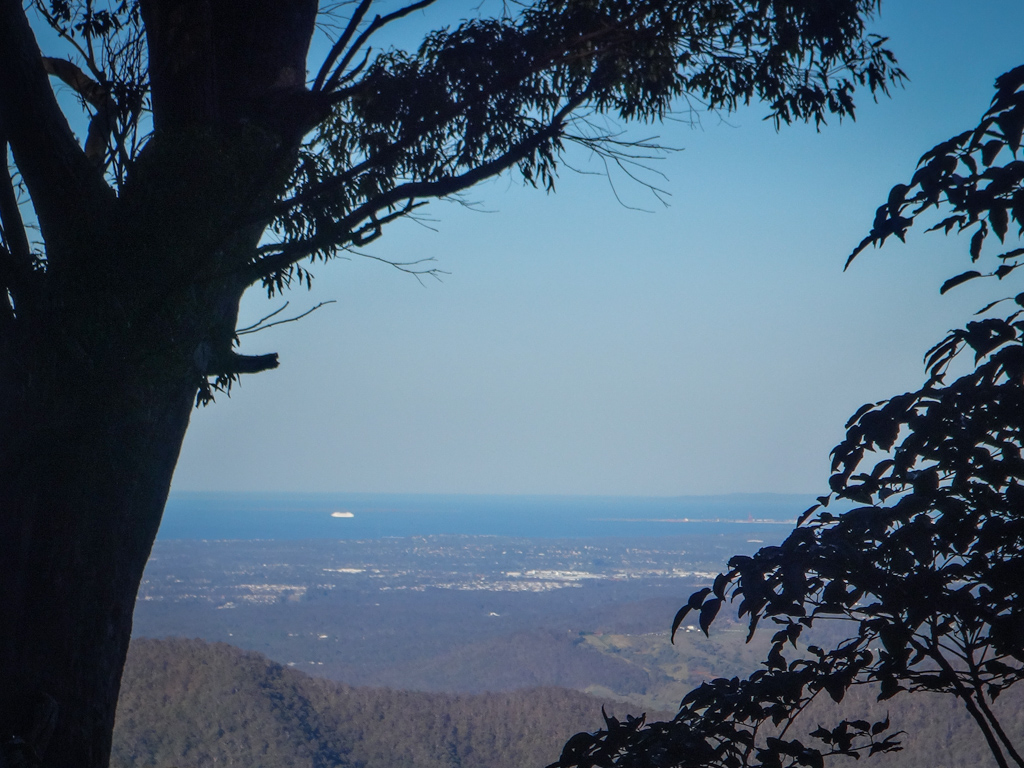 Views of Moreton Bay flashed through the thick trees. On the horizon a dazzling white cruise ship slipped seaward.

I have enjoyed cruising in the past: it’s relaxing and indulgent, but on this day I thought to myself how lucky I was to be here alone in the bush rather than on that ship. I wouldn’t have swapped with those passengers even if someone had paid me. 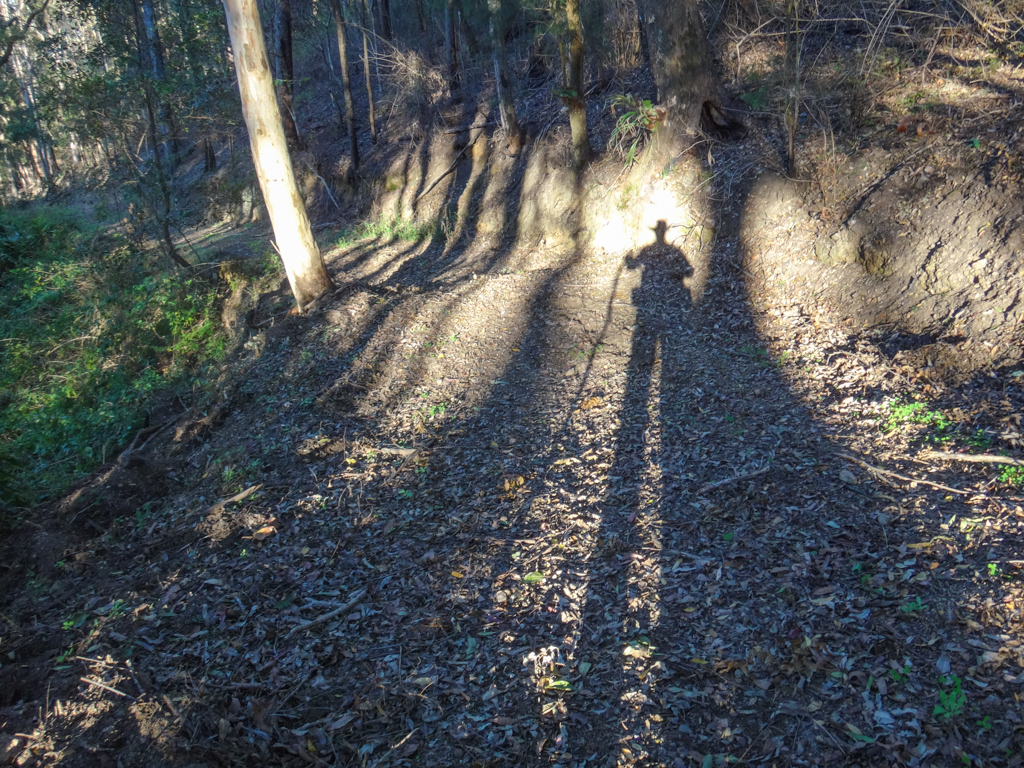 As the sun slipped lower, so did the tracks. The slopes pointed downward at an increasing rate. 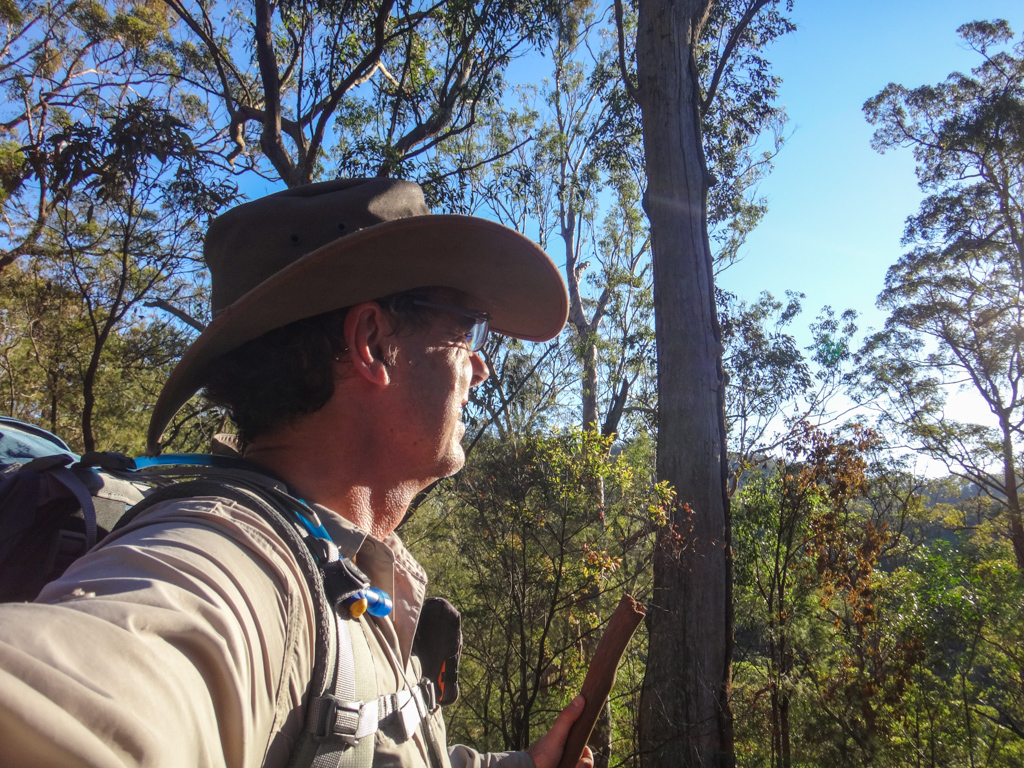 Being in the bush is all about soaking up the surroundings. I stopped my frantic march for a moment and looked around me. This was beautiful. The mountain slopes were thick with trees. A moderate breeze whispered through the leaves and branches. The late afternoon sun warmed my face. I had this place to myself and I was glad for it. 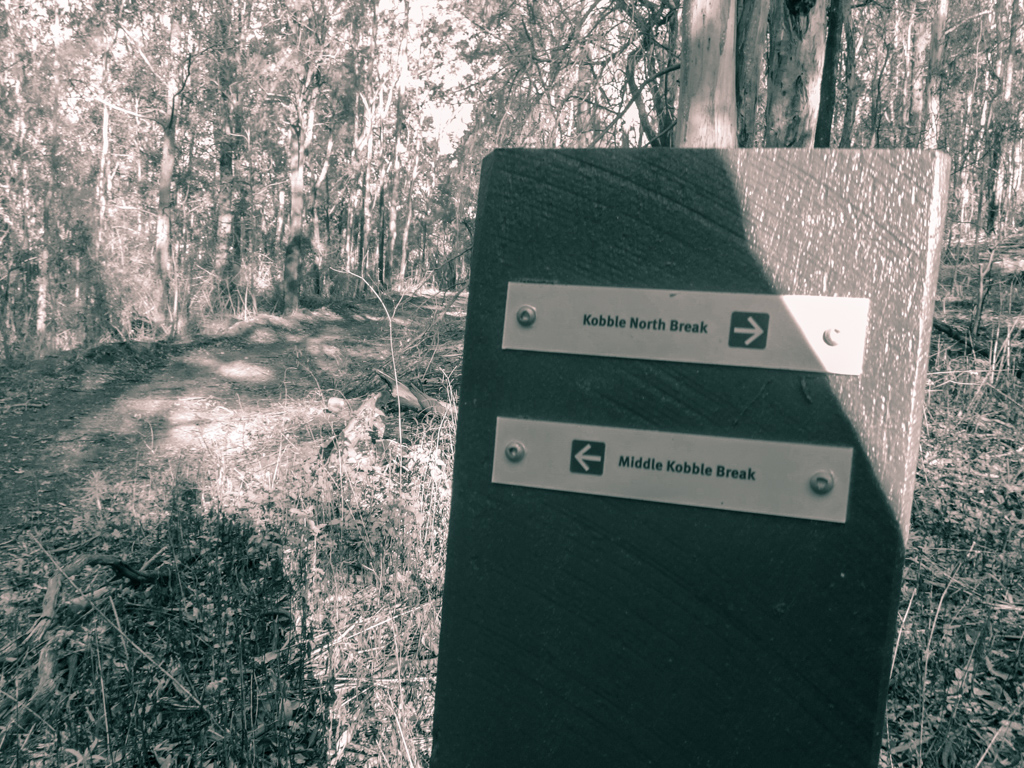 At the second intersection with Middle Kobble Break I followed the signs and turned right.

I remembered when we had come down here on the bikes, and I knew what was ahead. 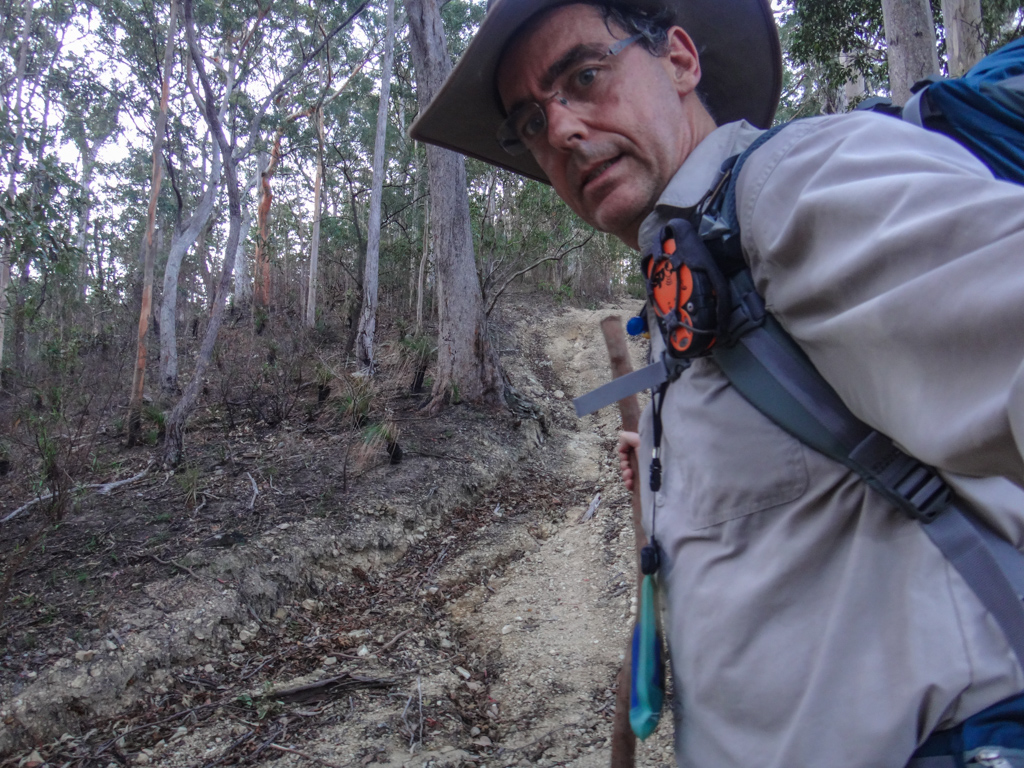 This was crazy. Each step was tricky. I carefully placed one foot in front of the other, and used my makeshift wooden staff to steady myself. A couple of times my foot slipped forward and I frantically flayed an arm to regain my balance.

How did I ever ride a bike down this? 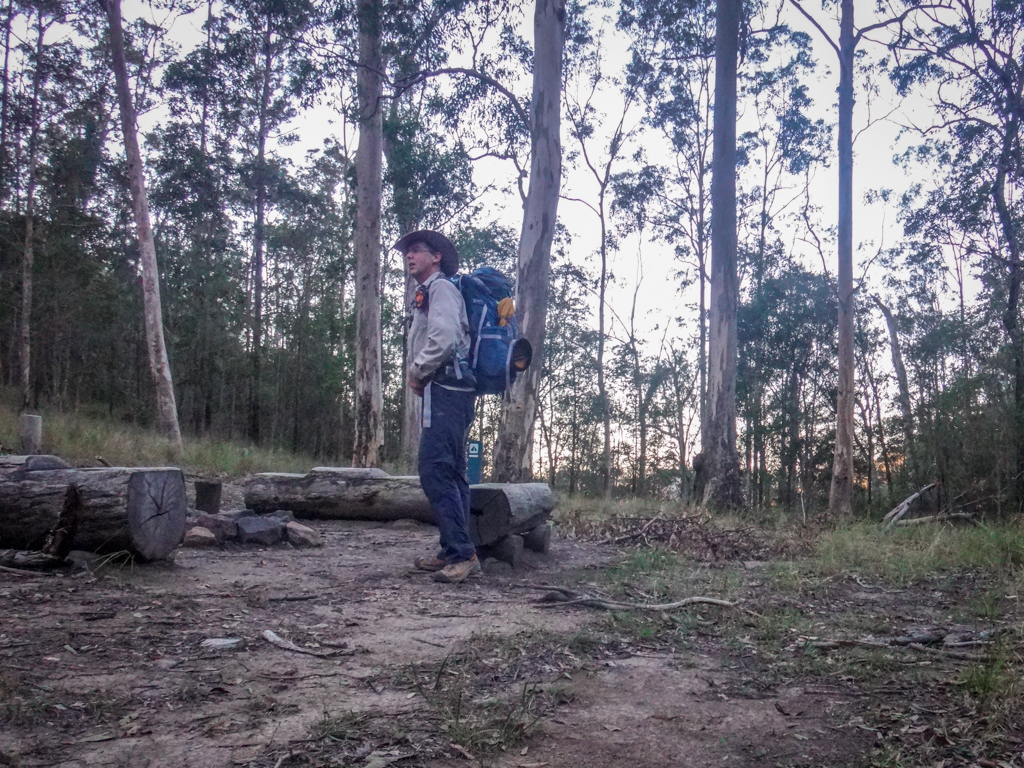 The campsite was at the bottom of the descent.

I dropped the pack and felt like I would float skywards because of the sudden reduction in weight. 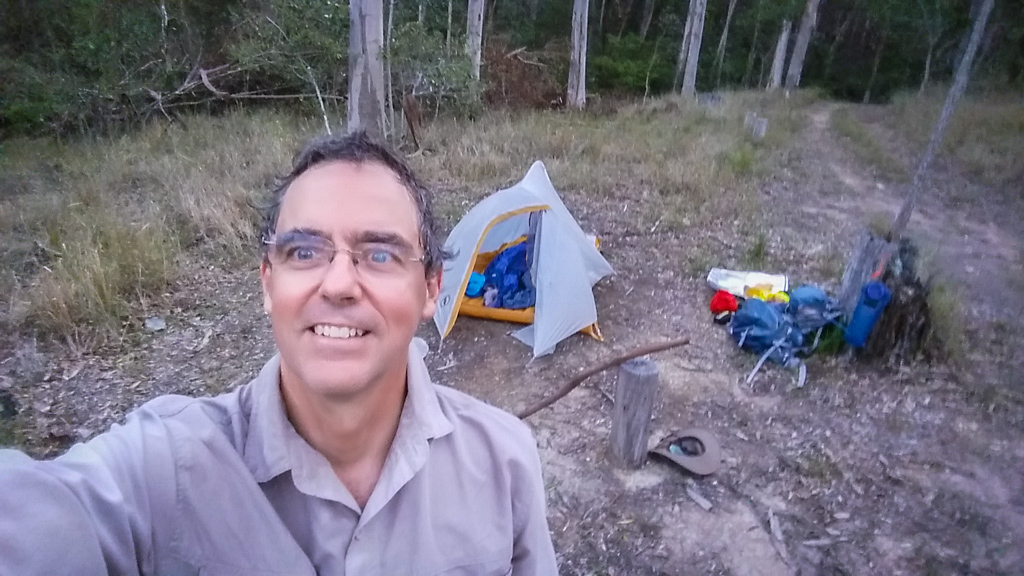 I had my tent set up in a few minutes, but realized I had left a few key things behind: my inflatable pillow and my air-mattress pump. Oh well, at least I could improvise. 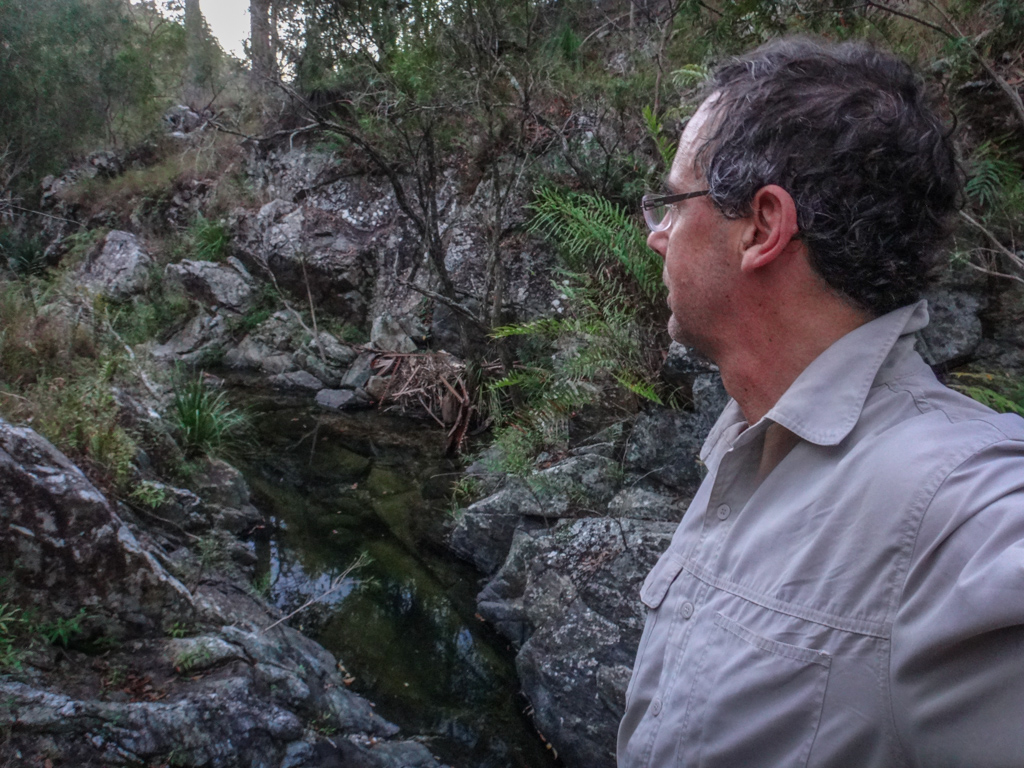 There was about 20 minutes left before dark. The fireplace had plenty of wood, so I hopped around the rocks and had a look at the waterfall.

A small trickle of water in the creek bubbled over rocks. There was no mighty cascade over the falls today, but it was still pretty.

The fire started first go. I didn’t need any metho or paper. After a couple of minutes I proudly admired my creation and warmed myself by its flames.

The night grew dark, the stars shone bright, and the wind freshened. I recalled Banjo Patterson’s description of the bush at night from The Man From Snowy River:

And down by Kosciusko, where the pine-clad ridges raise
Their torn and rugged battlements on high,
Where the air is clear as crystal, and the white stars fairly blaze
At midnight in the cold and frosty sky, …

Even though it wasn’t frosty on this winter’s night, I shared Banjo’s love of camping out in the bush.

I went to bed early and slept well, waking occasionally to hear powerful waves of wind rolling through the trees on the slopes above me. It rarely reached me in this sheltered little valley, only shaking my tent a couple of times. 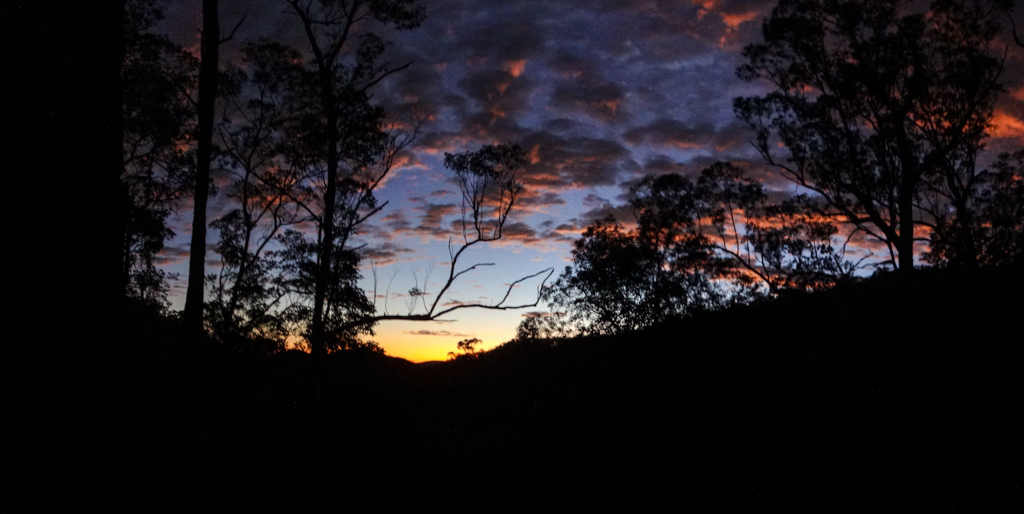 I awoke before dawn, had a bite to eat and packed my things. 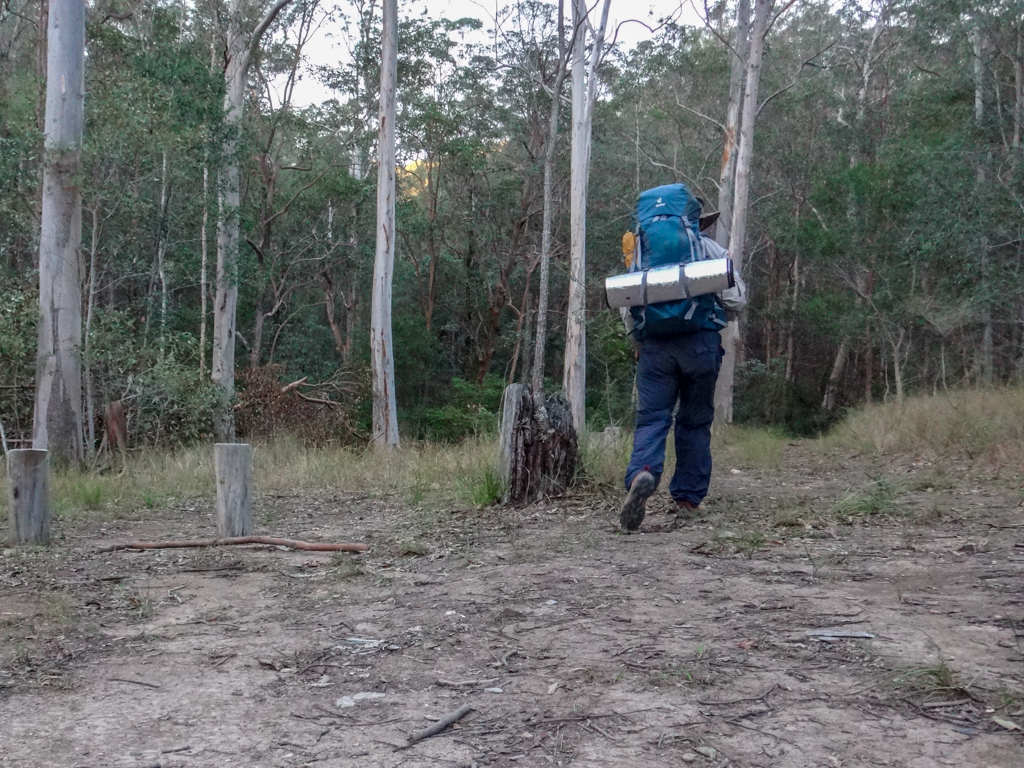 After I had consumed most of my water and food, my pack felt a lot lighter. In hindsight I could have filtered the creek water rather than hauling in 4 litres, but sometimes it’s difficult to know these things in advance. 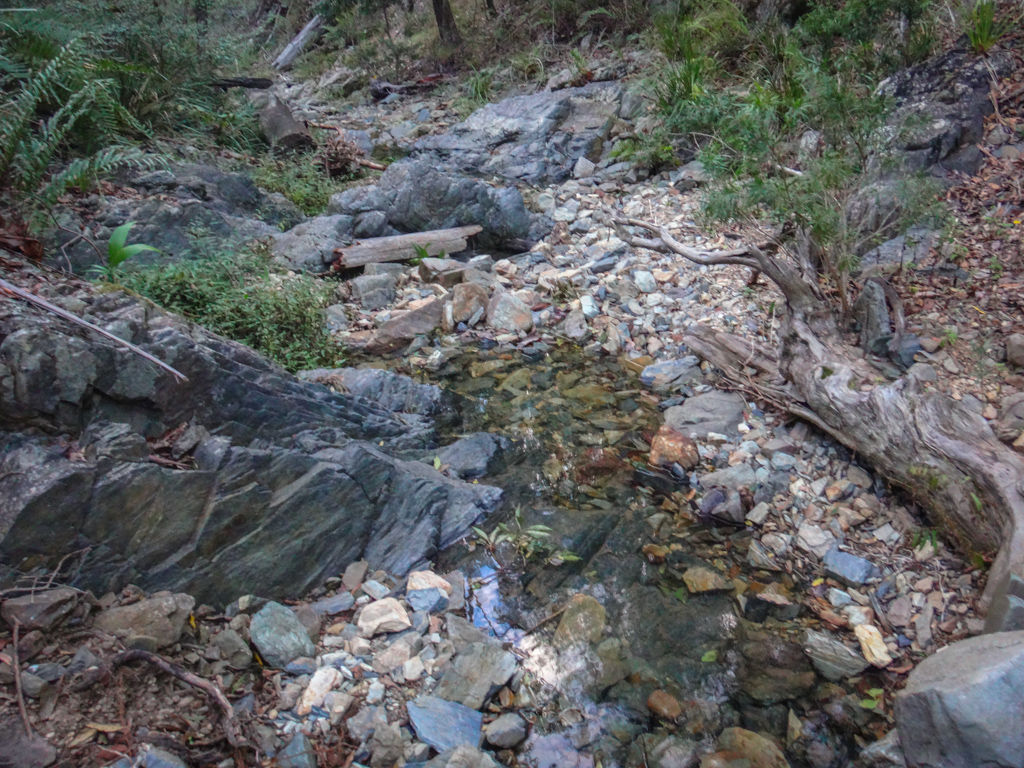 I bade farewell to Middle Kobble Creek and started my long uphill trek.

Yesterday my walking stick had made my descents much easier. Today I used it to pull me uphill. When one arm grew tired of the work, I switched hands. Occasionally I’d hold the branch in two hands and pull on it like the oar of a boat. It must have looked clumsy, but no one was watching. 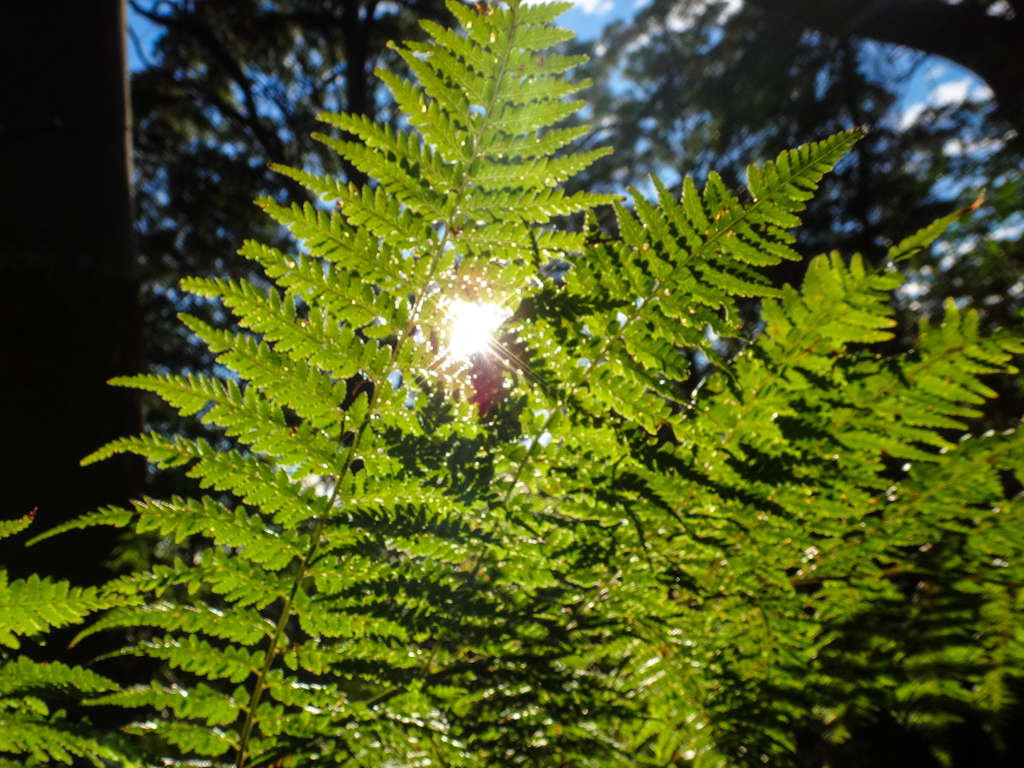 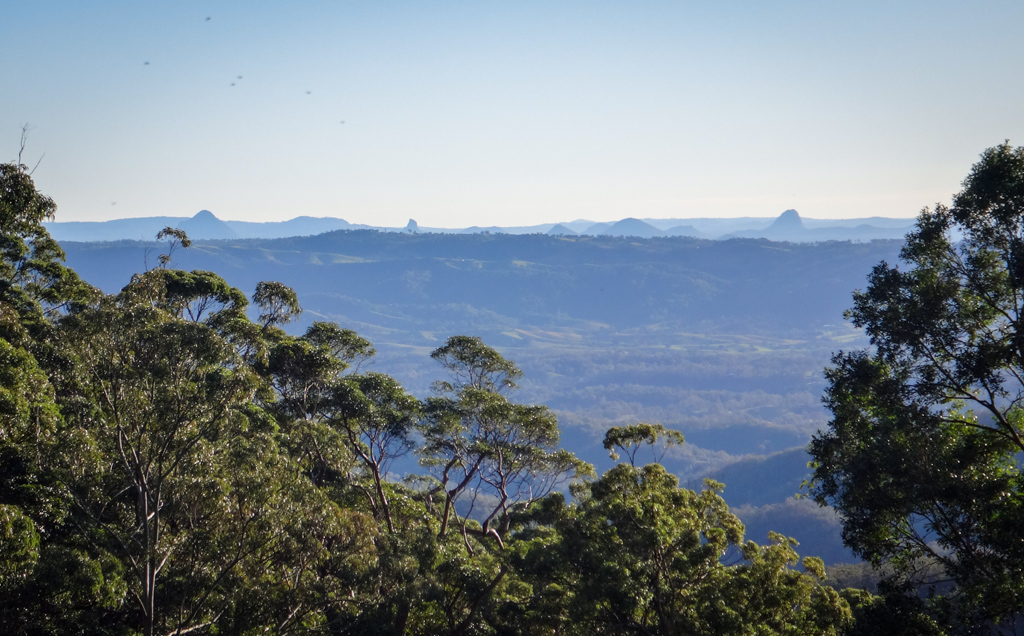 Through the trees the odd-shaped peaks of the Glasshouse Mountains beckoned to me. I had ridden through here with my friends the previous day. Now one day later I was looking at them from another mountain. Their familiar peaks reminded me that I’m fortunate to have such a large back yard to play in. I belong to this place. 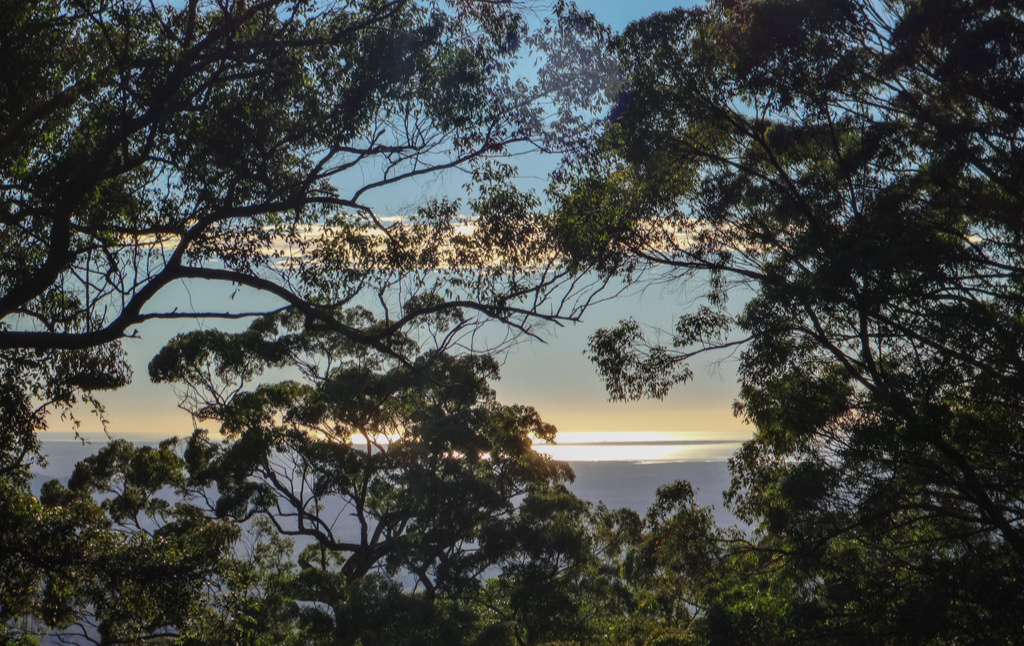 To the east the morning sun glistened on Moreton Bay – almost blindingly through the trees. 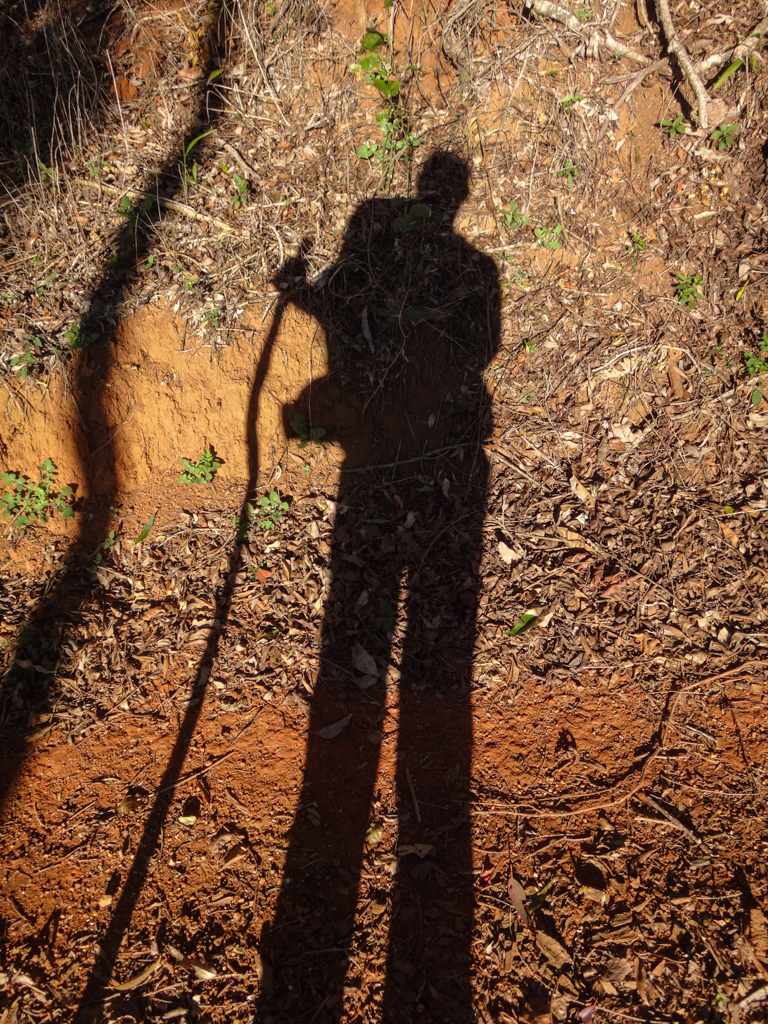 My shadow shortened as the sun rose higher. Yesterday was playing out in reverse. 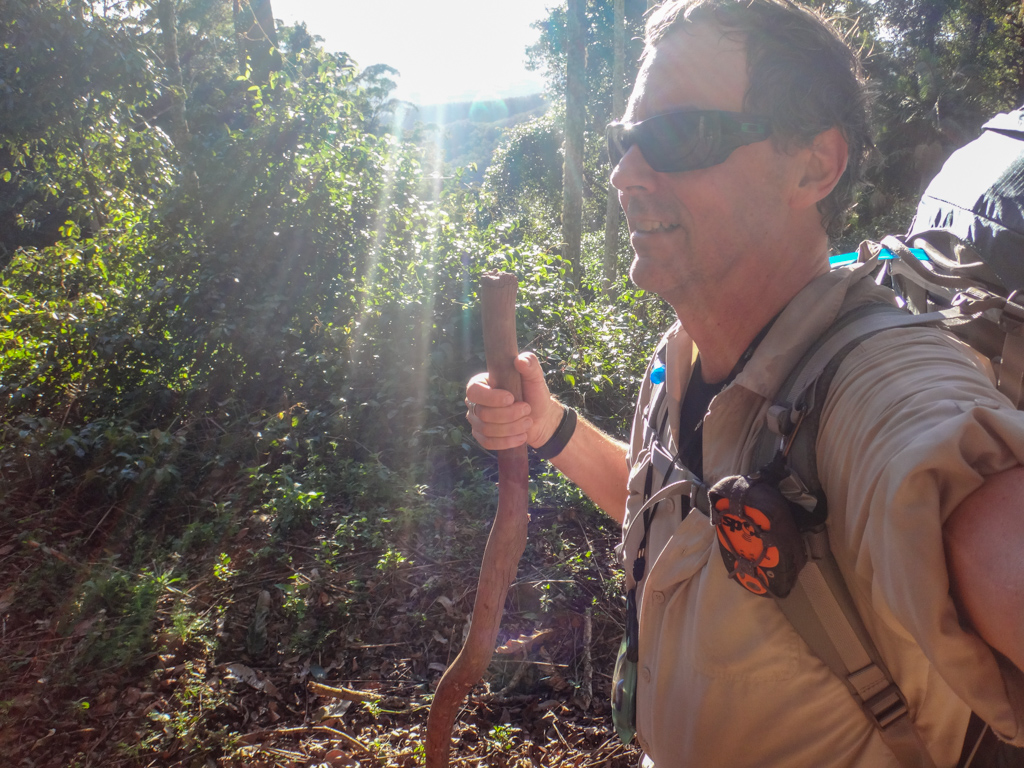 I felt relief at the top of the climb. It was reasonably flat now. The hard work was over. I grinned inwardly as I listened to the “one-two-and-a-half one-two-and-a-half” of boots and staff on the ground.

This was a lot of fun. I want to do it again. 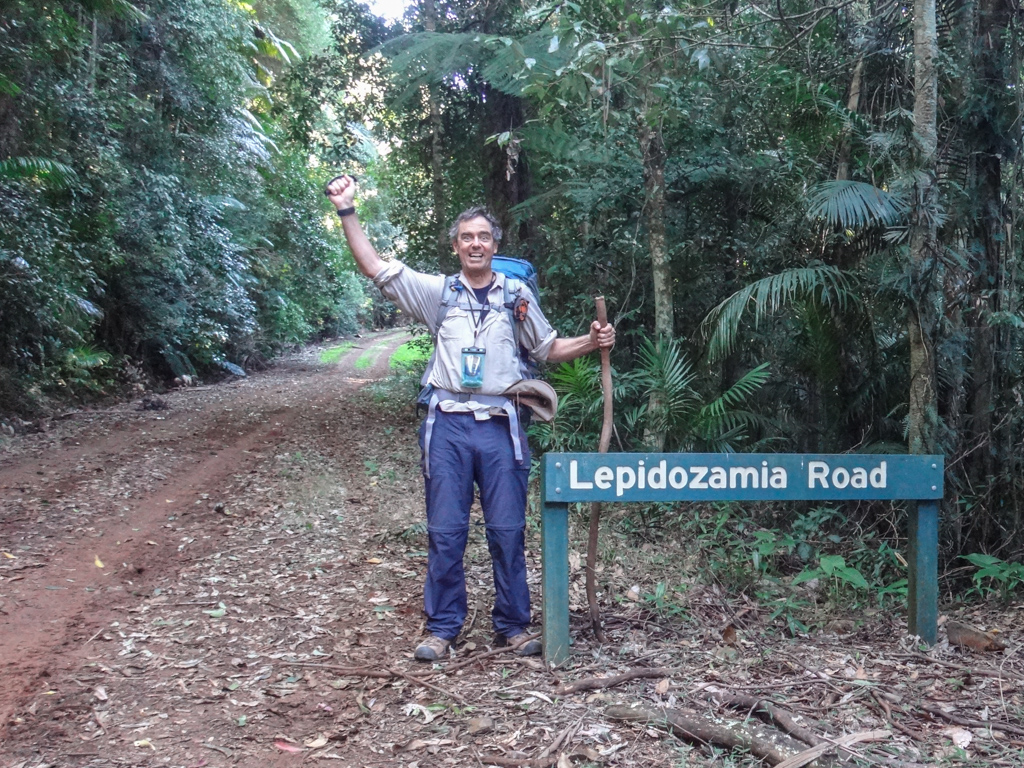 The GPS tracks were a little inaccurate because of the trees, but basically the hike in was about 5.5km with about 400 metres of descent. The hike out was about 4.5km with about 400 metres of climbing. Both sections took me about an hour and three-quarters. To do the walks justice, and enjoy it, I’d recommend allowing two-and-a-half to three hours each way. Take a walking stick – those slopes are challenging.