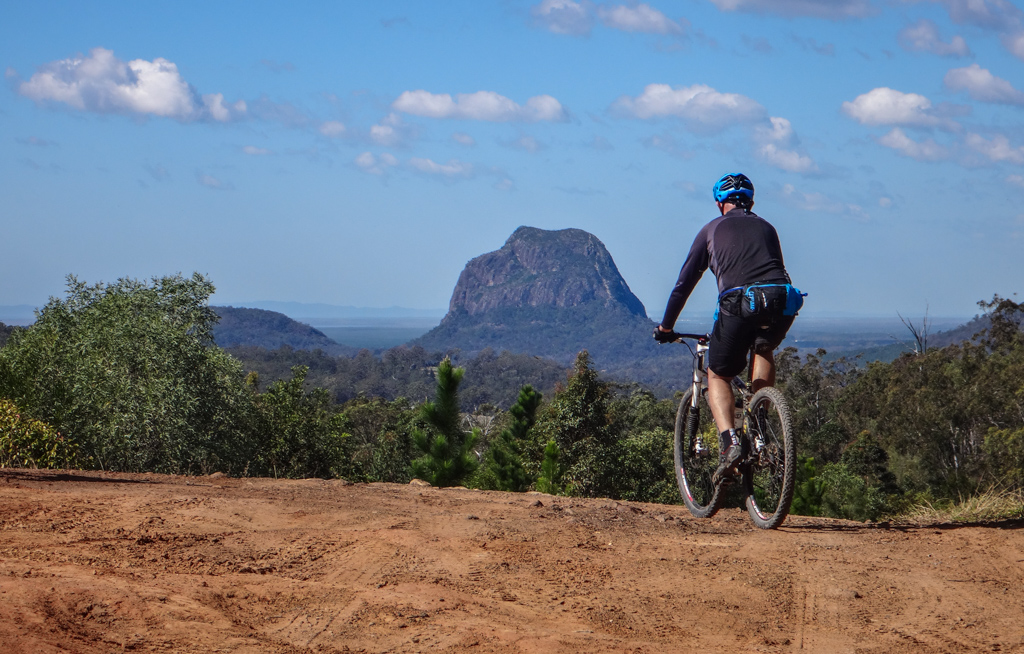 Every year we enjoy a social ride with a large group of cyclists exploring the Glasshouse Mountains. A lot of groundwork goes into checking the trails to make sure they’ll be rideable. Today’s adventure helped us work out which tracks would be worth including, and which ones would be best avoided. 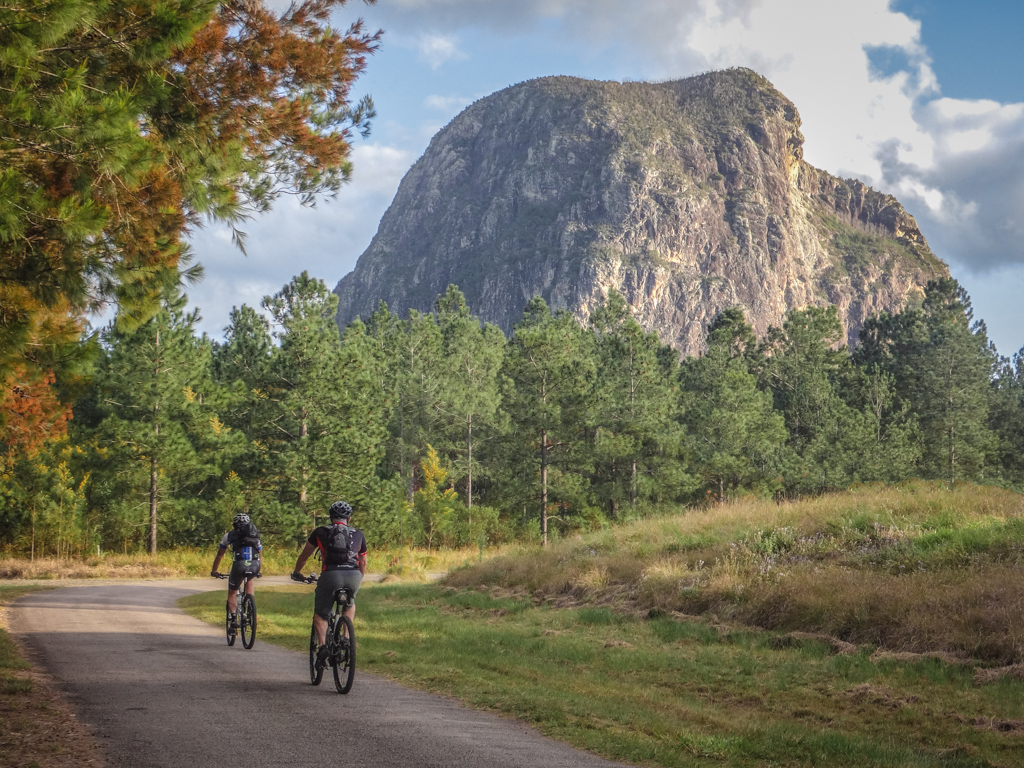 We started at Flinders Park in Beerburrum under the brooding gaze of Tibrogargan as he stared out to sea. The Kabi legend of the Glasshouse Mountains tells how father Tibrogargan watched the ocean and could tell when storms were approaching. When he was angry, he also gazed out at the ocean – not in vigilance but as a way to keep emotional distance between him and his eldest son.

Luckily, there were no storms approaching today, and no one was angry. 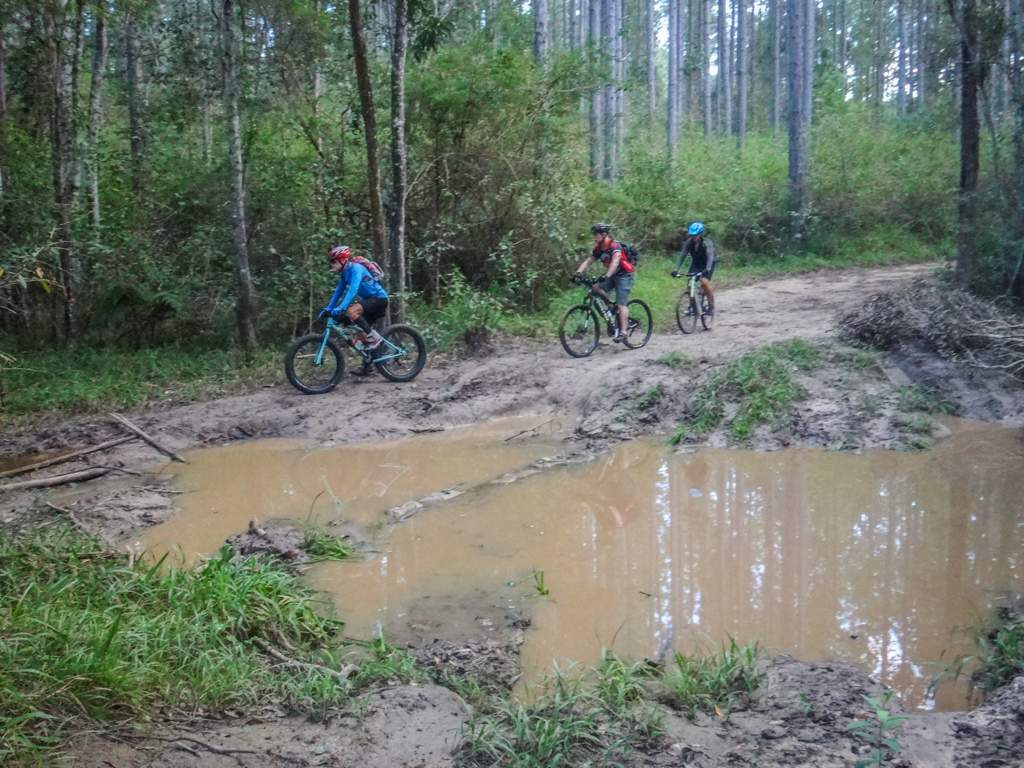 Recent rain has created lots of large puddles on some of the familiar tracks. We rolled around the edge where we were able. 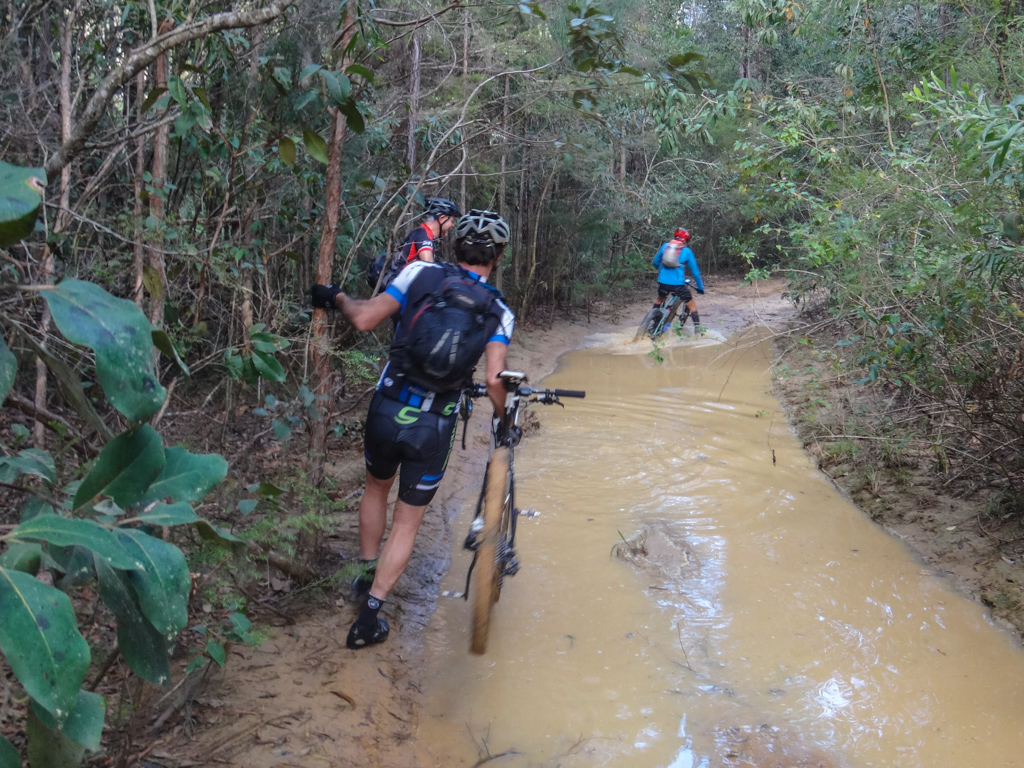 In other places we tried to plough through, or carry the bikes past the worst bits.

“Why don’t we try this new track?” I suggested to everyone… 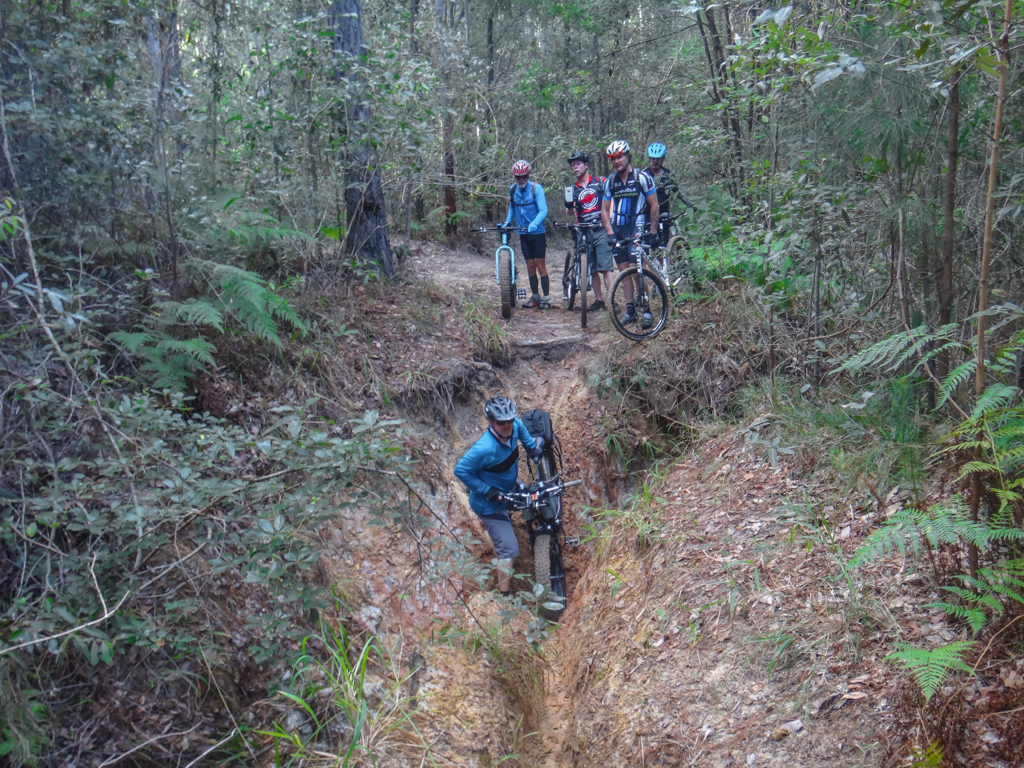 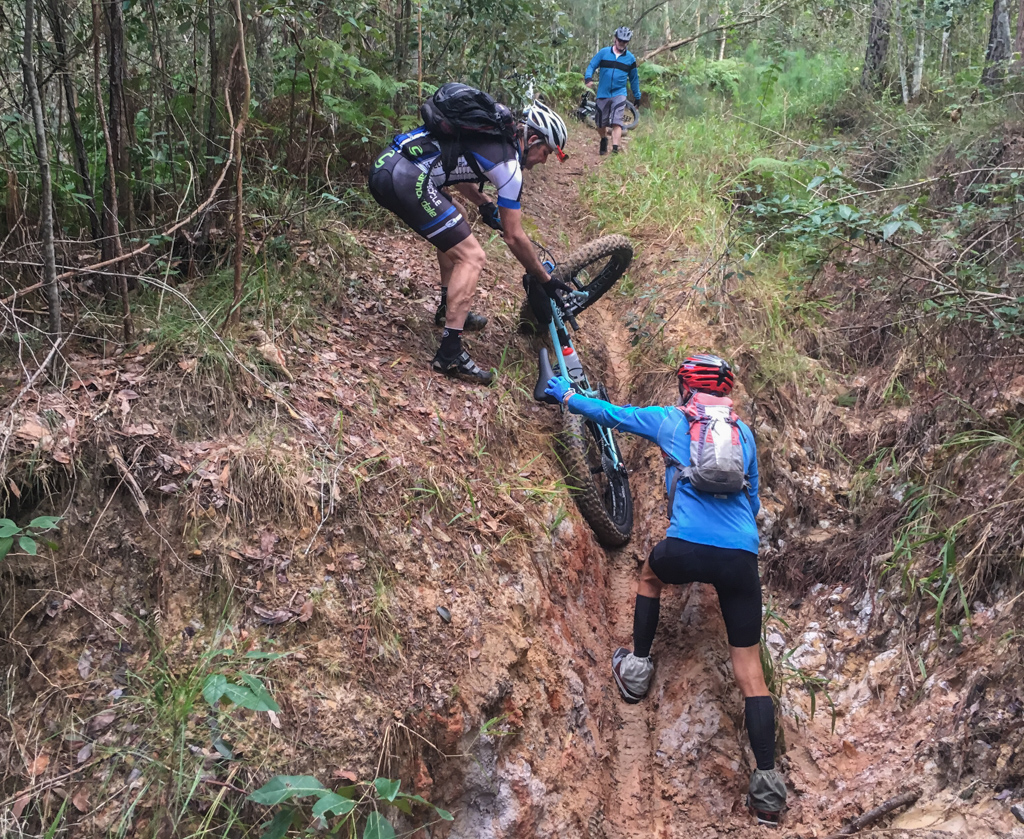 … Well – maybe not. I think we’ll be giving this one a miss next month. There’s a good chance we could lose some riders in that mud. 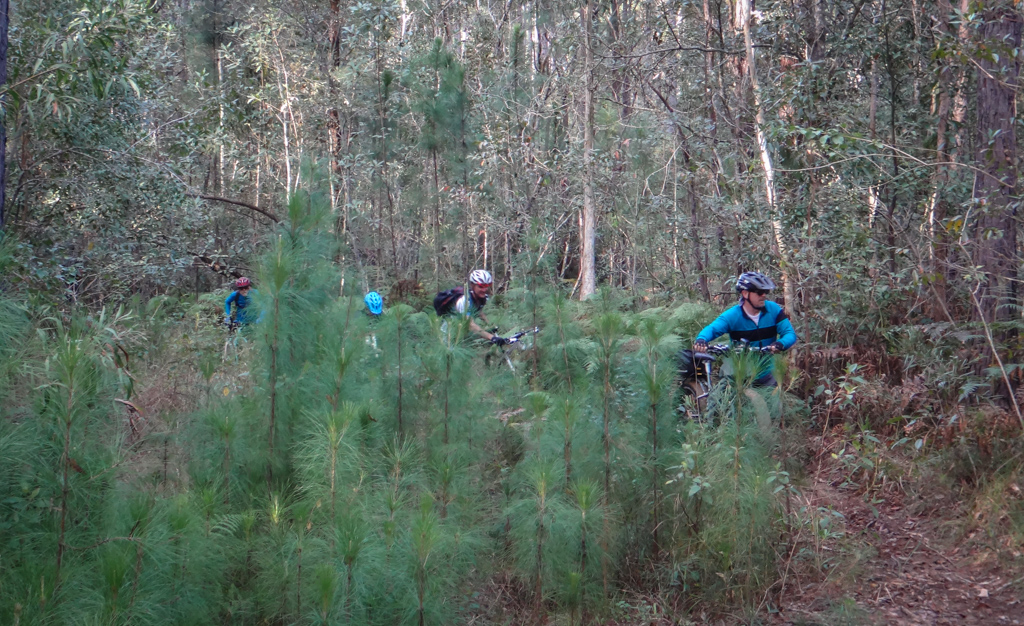 We had decided in advance to scout out a few new tracks, just to see what they were like. On the map they looked quite good, but in reality they were a little more difficult to follow. We didn’t mind. Today was all about asking questions. 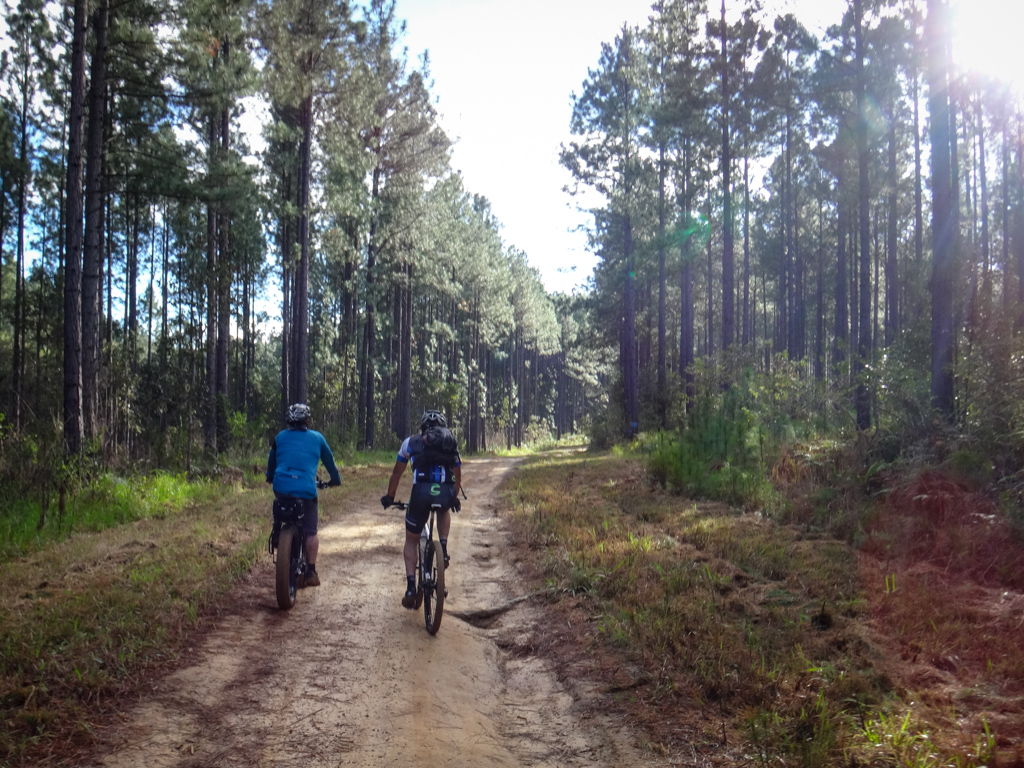 We eventually emerged from our barely visible track onto a broad clay fire road which we followed through the forest for a few kilometres.

The winter sun hung low in the morning sky causing the pine needles in the trees above to glow a silvery green. 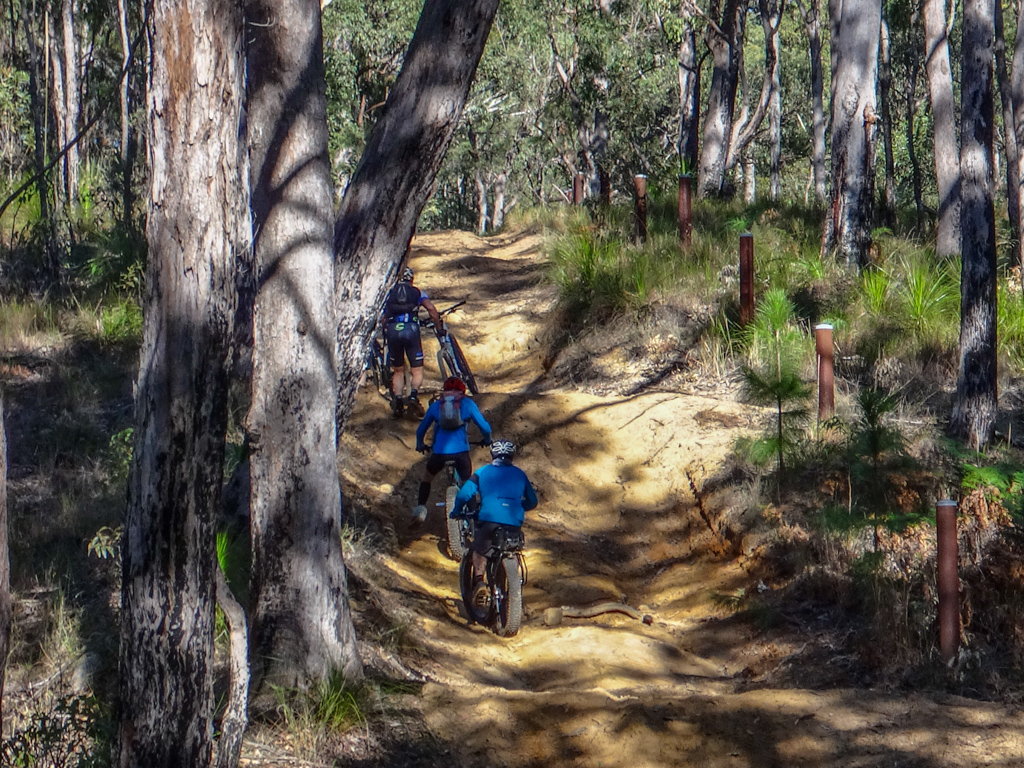 At Woodrows Road we mashed the pedals for a while as we climbed up some steep slick-rock hills. 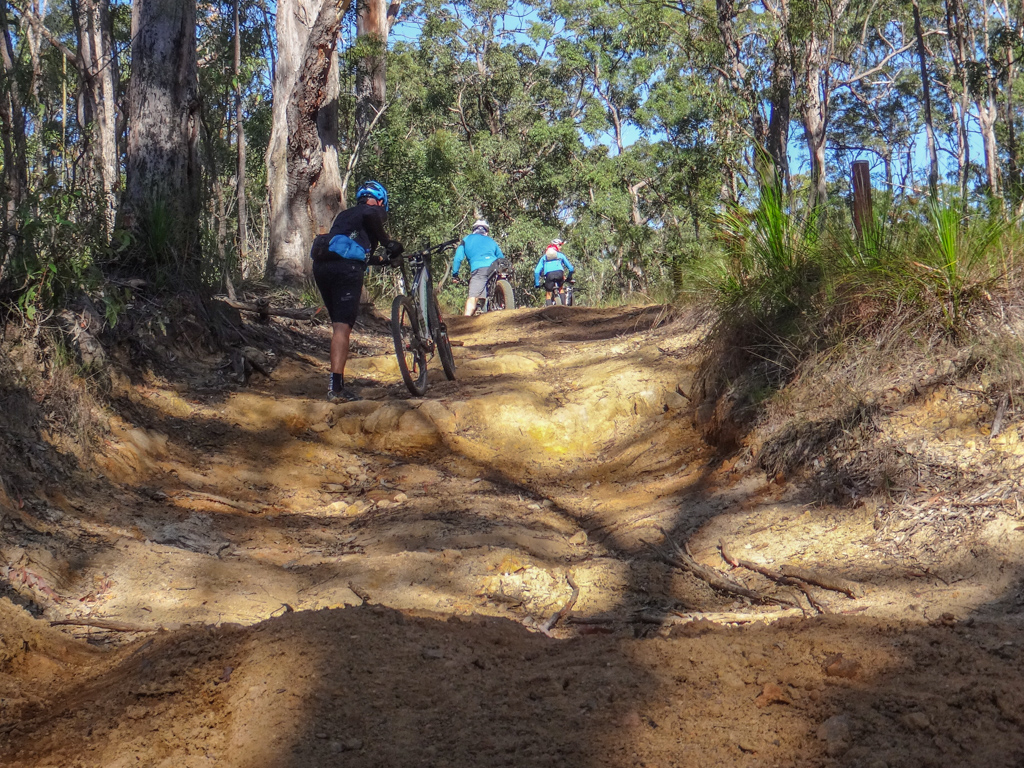 In one or two places it was a bit too steep for us to ride.

Paul has been off the bike due to injury for the past few months. It was good to have him back, but I’m sure these hills were tougher on him. To his great credit he kept smiling and didn’t complain. 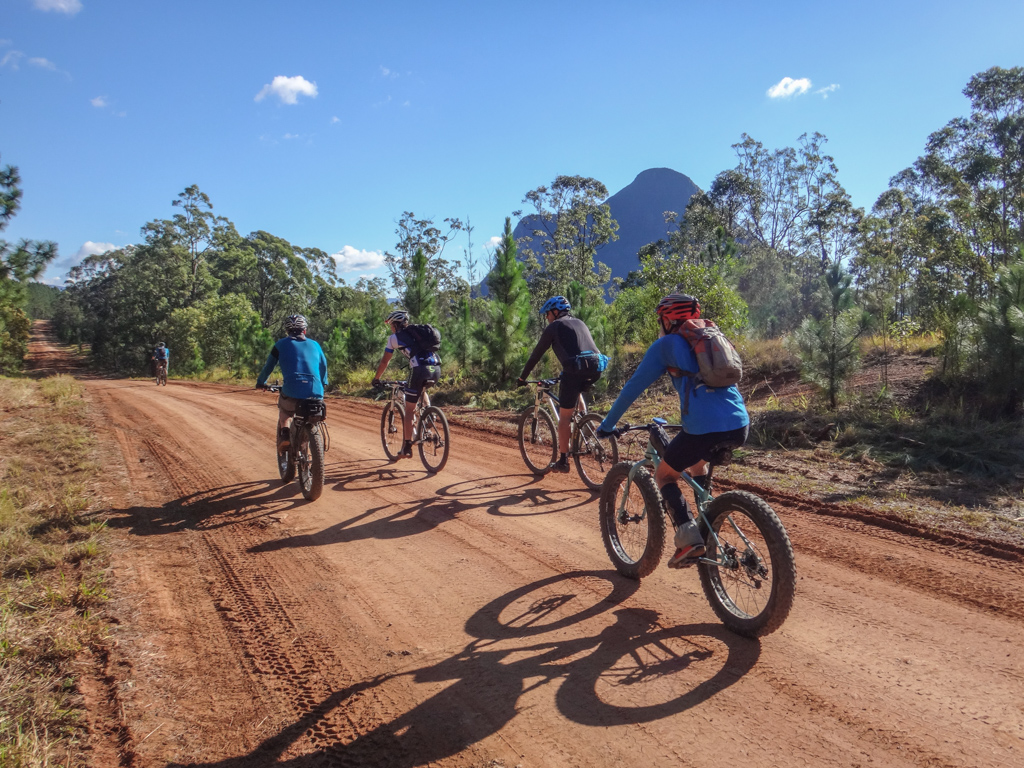 The sharp climb up Woodrows Road spat us out onto Connection Road which leads towards Mount Beerwah. There were a few more trails around here that looked interesting, so my ever-patient riding buddies agreed to have a look at them… 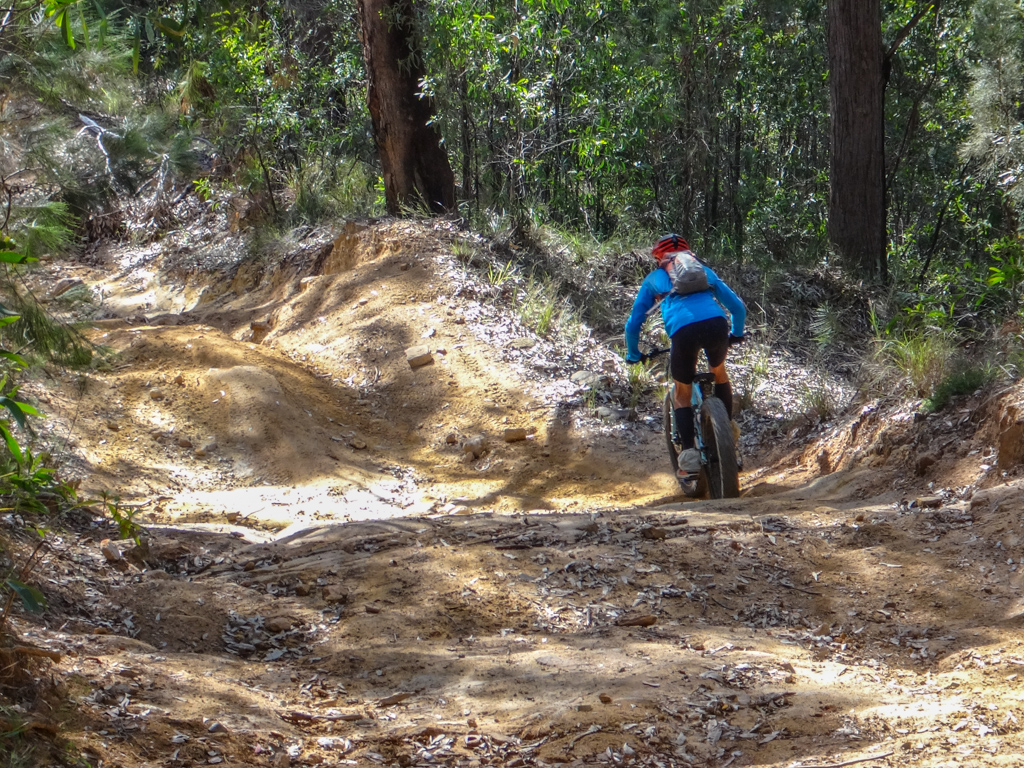 The first descent was great. Calum fearlessly took off down the hill, his fat tyres skidding on the clay. We suppressed our fear and followed him. 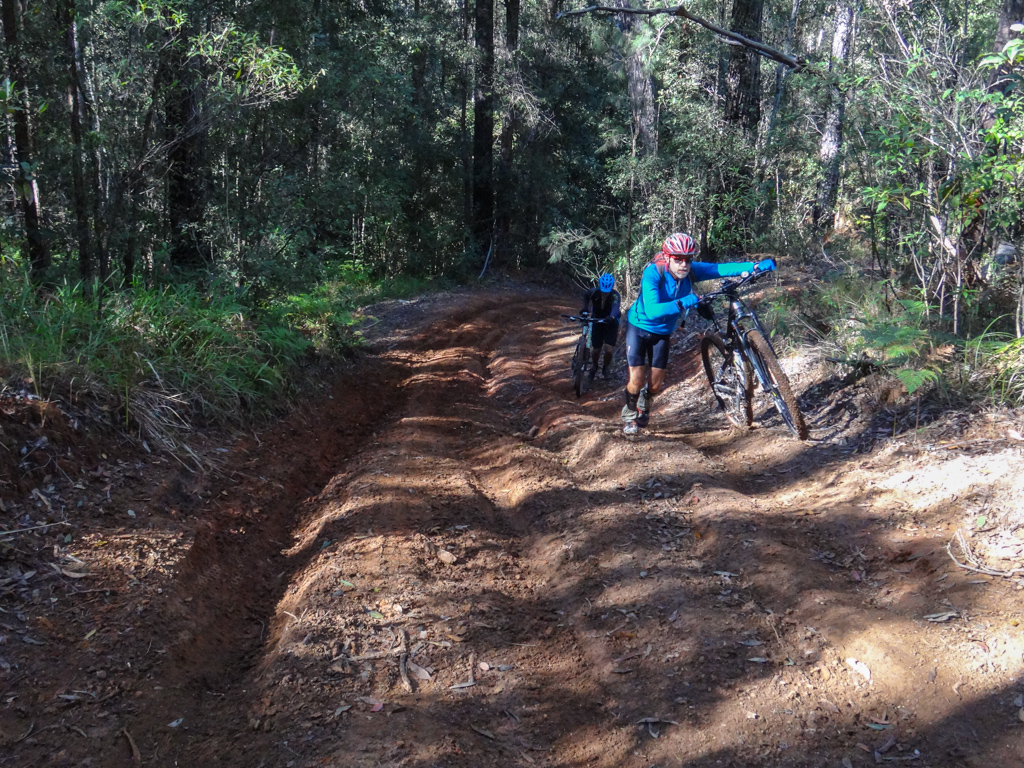 The problem with going down a hill on a bike is that you inevitably have to ride back up another hill.

This time the slope was too intense so we pushed up instead. 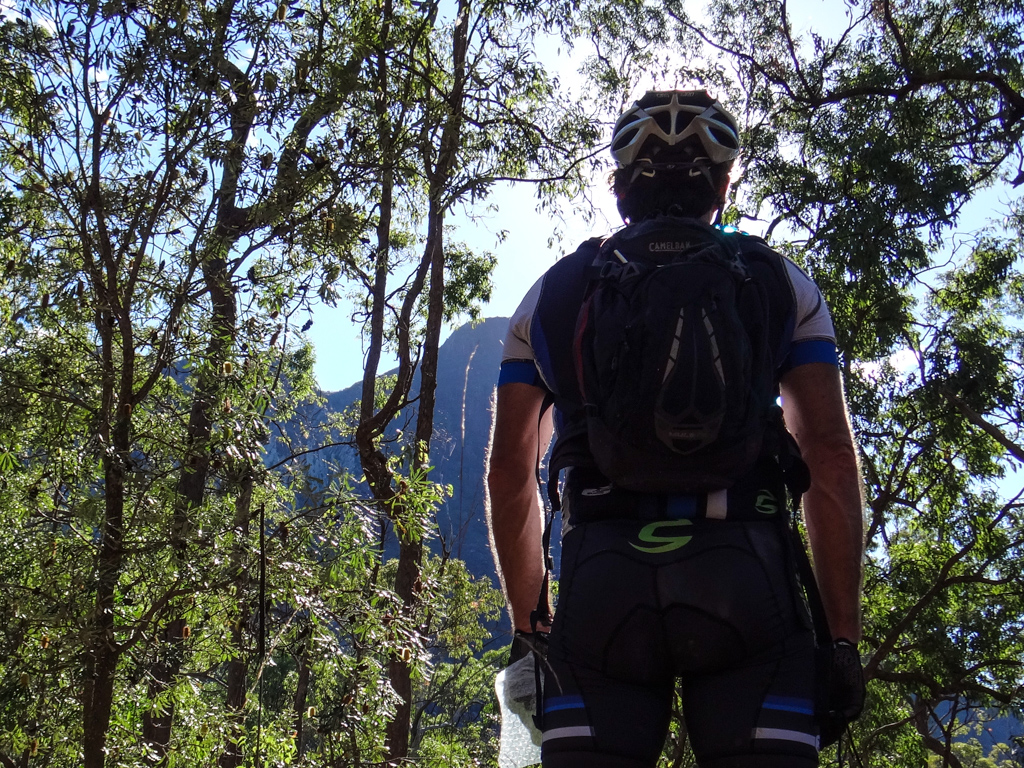 We drew closer to Mount Beerwah. At 556 metres, Beerwah is the tallest of the Glasshouse Mountains. In aboriginal legend, she is the mother of this family of mountains, married to Tibrogargan. She’s also pregnant, and has been for thousands of years because it takes ages for a mountain to give birth. Whenever I ride near her, I am reassured by the thought of a giant mother looking down at me. 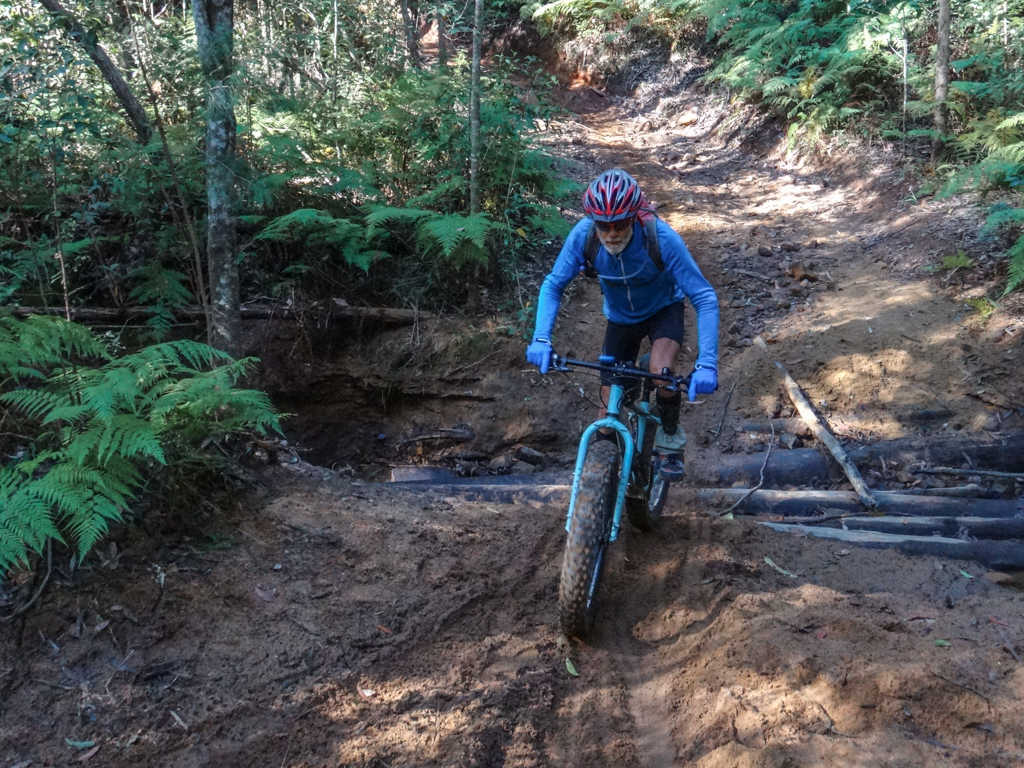 We rolled down another steep track. Someone had covered a deep hole at the bottom with logs which we gratefully rolled over. 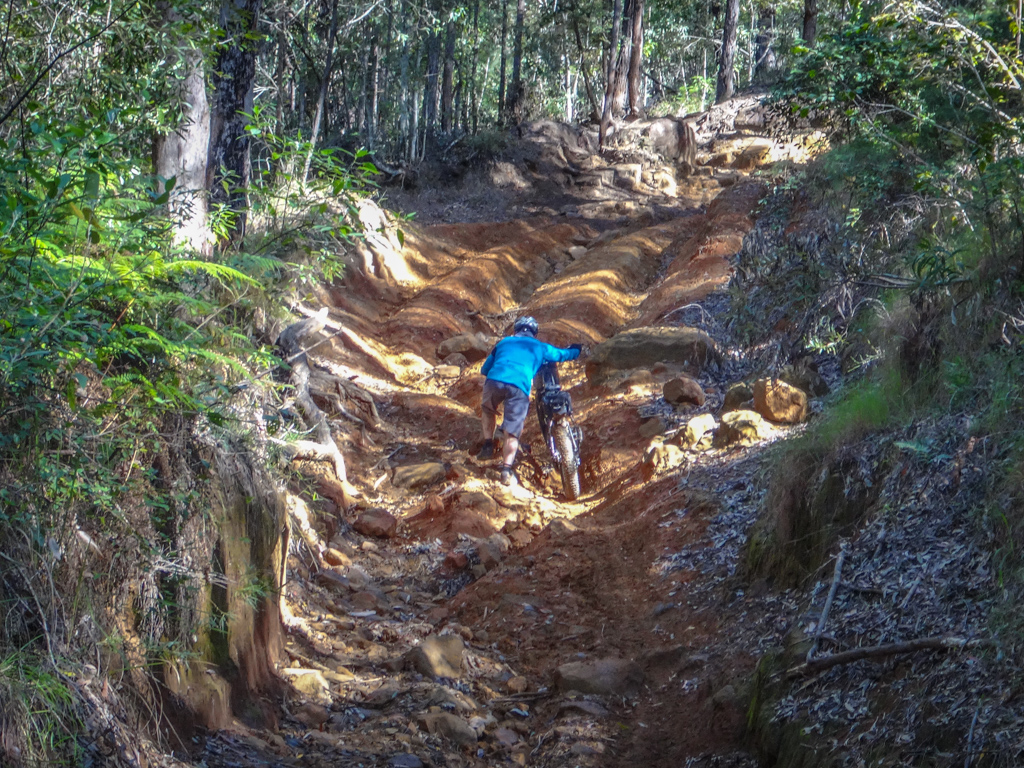 And then another massive hill… 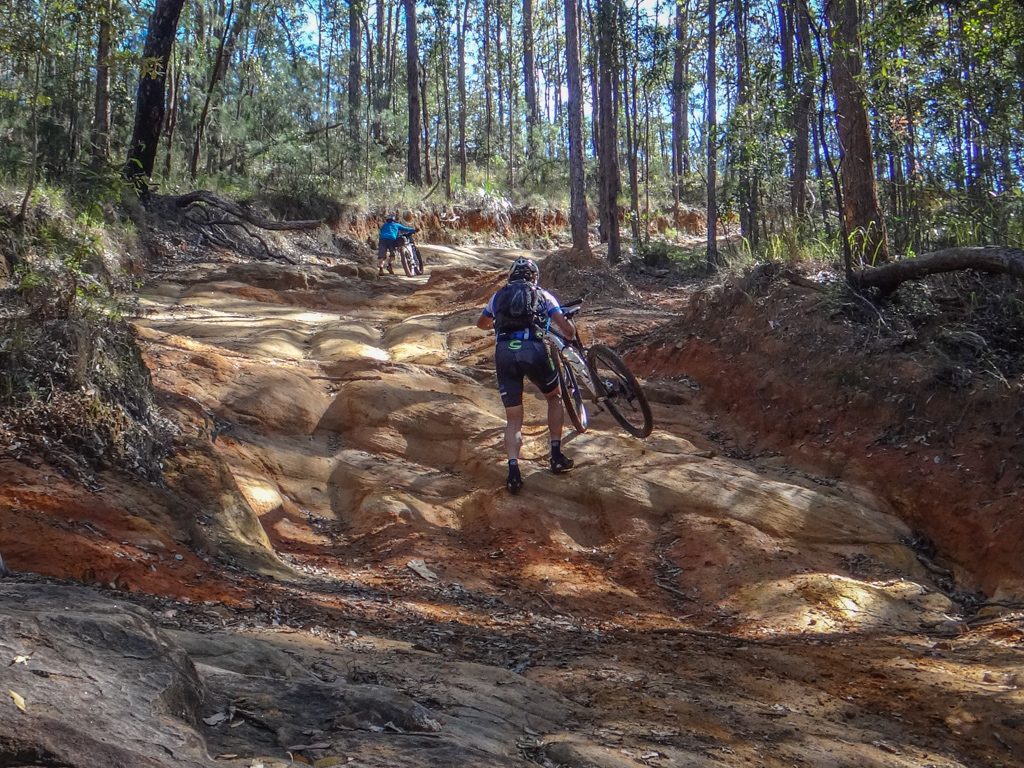 “Are we going to bring people here next month?” someone asked…

I joked that perhaps we should save this trail for people we didn’t like.

“Does that mean you don’t you like us?” someone replied. 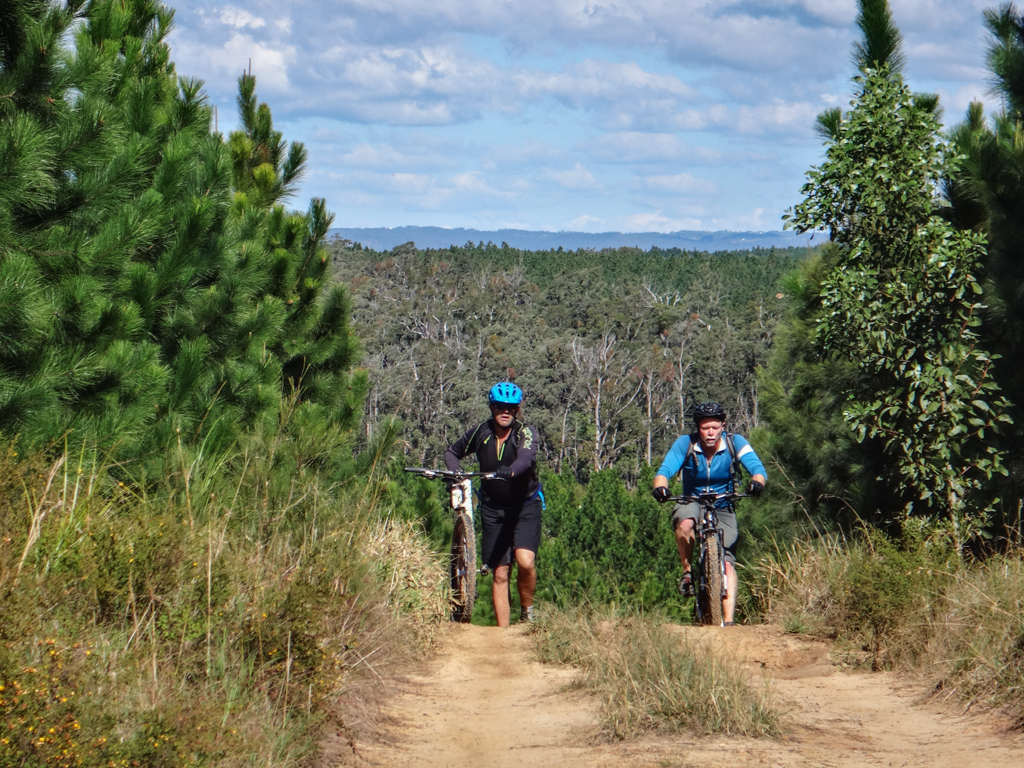 Around the back of Mount Beerwah we followed a 4WD track up another hill. I had driven here in Darb’s car last year and wanted to show everyone the view. 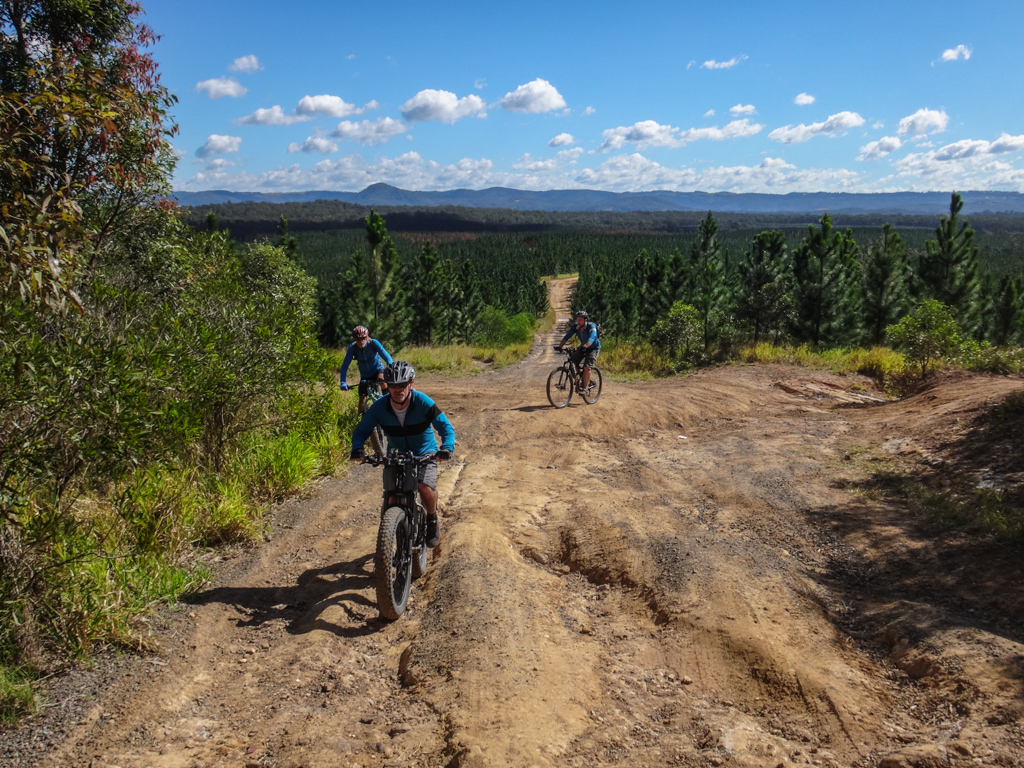 It’s much easier when you drive, but I think the views are always better from a bike.

As we gained height the pine plantation spread below us, a carpet of dark green. 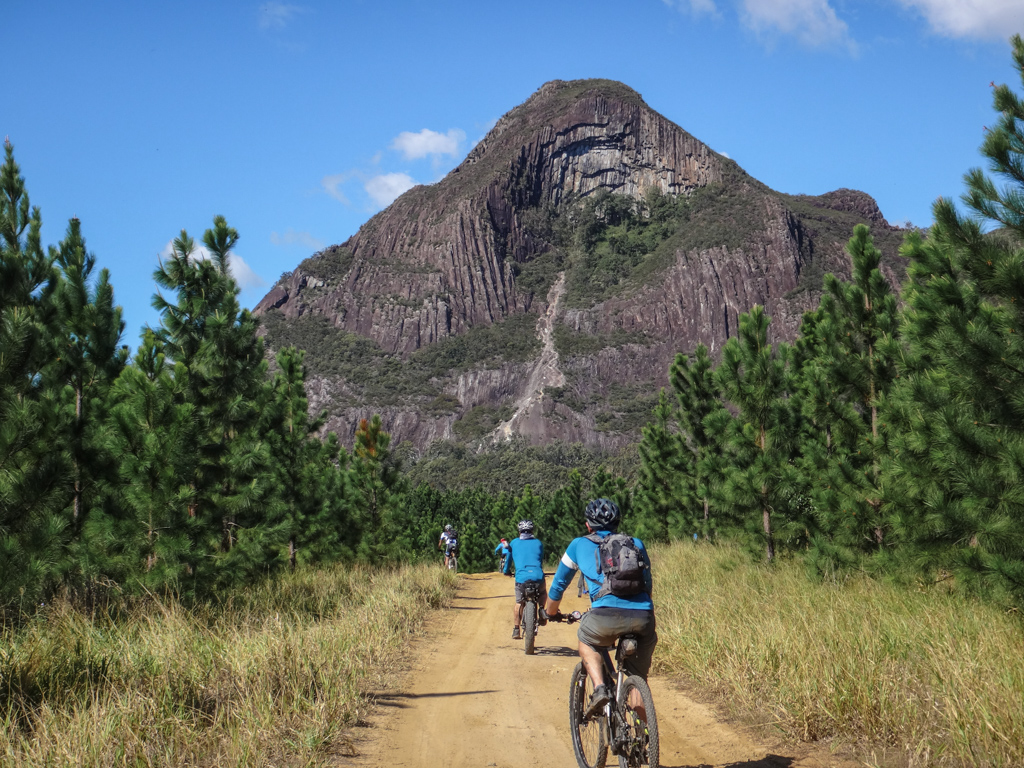 “Can you see a face?” Jason asked.

I think these Kabi legends are starting to affect our minds. Which is a good thing. 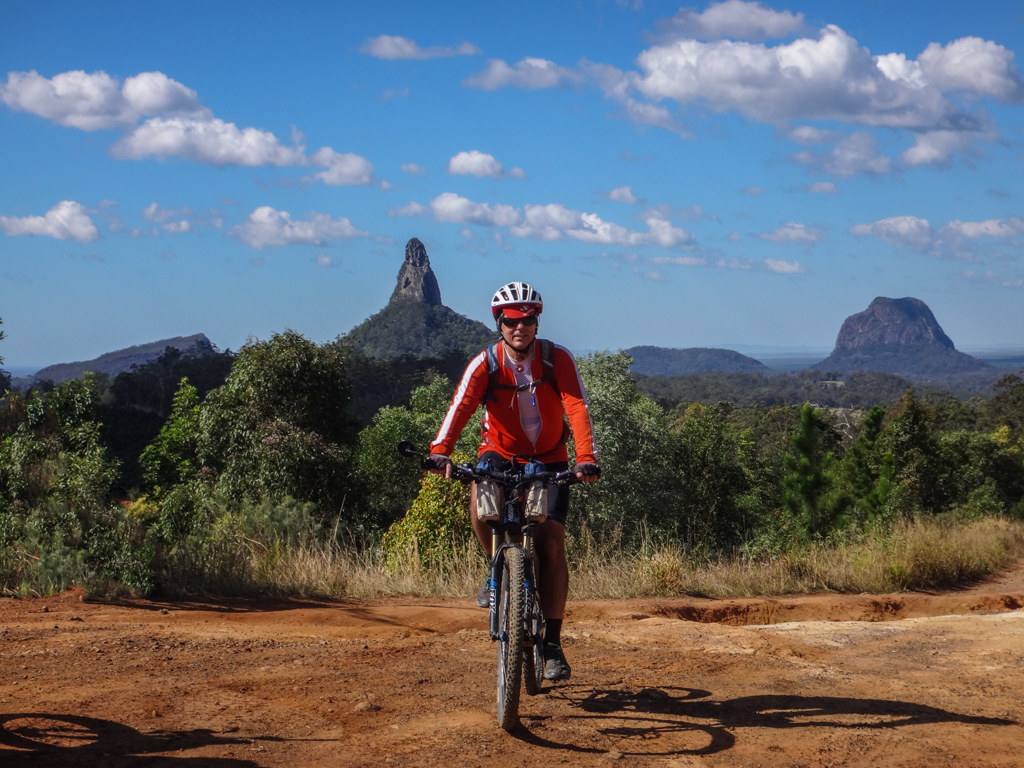 At the top of the hill we could see it all. On the horizon the islands of Moreton Bay sparkled in the ocean.

In front of them, the strange shapes of the other mountains stood like Titans.

Beerwah towered over us on our right.

“Yes, we’ve got to bring people here,” I thought out loud. 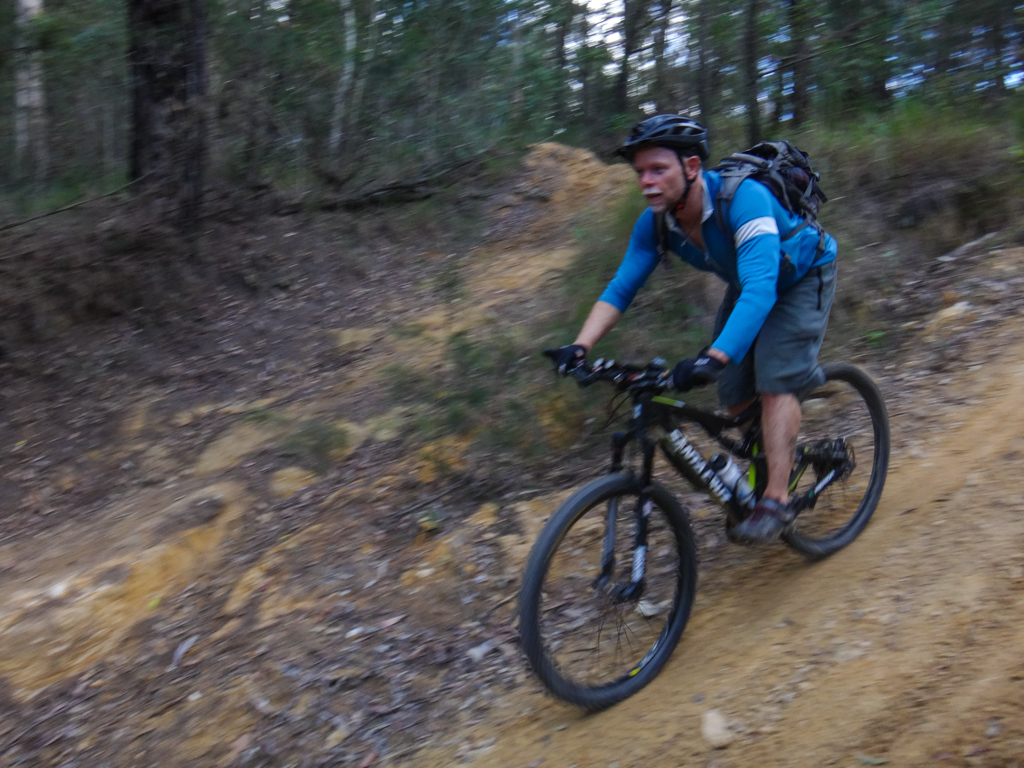 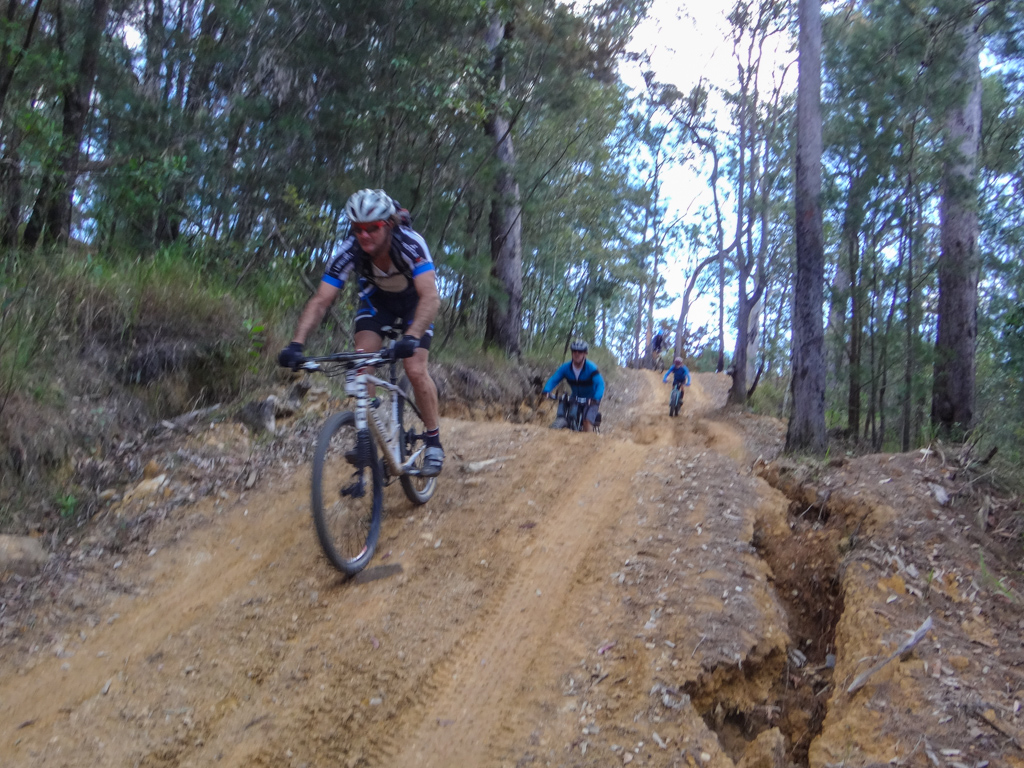 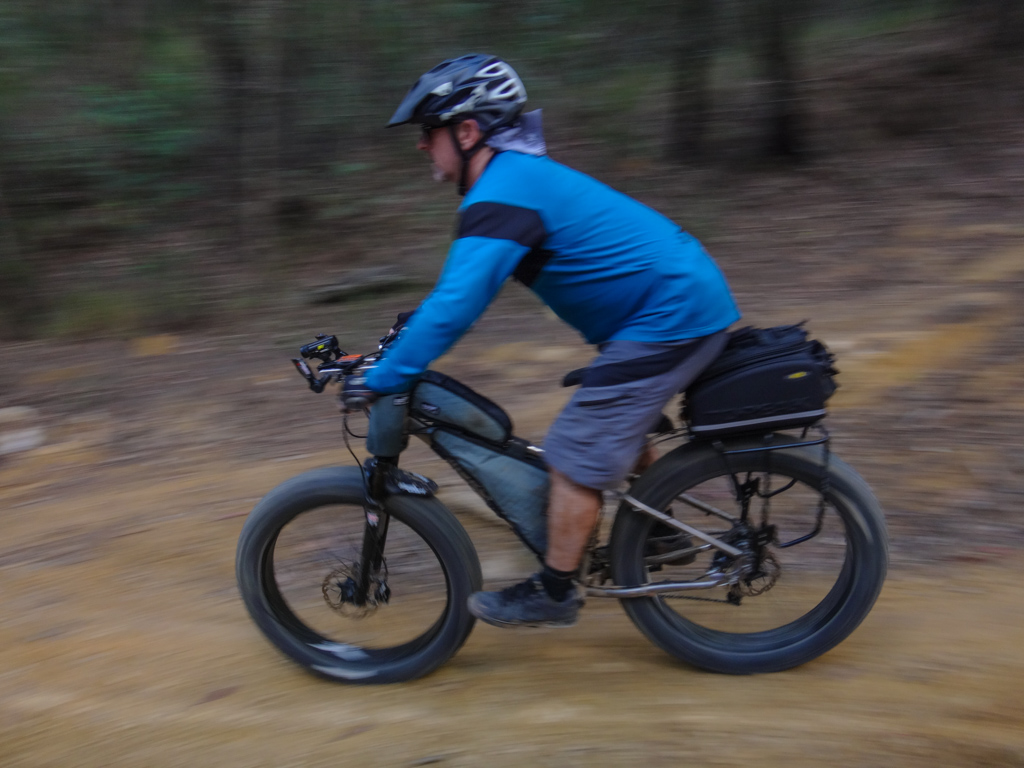 After the lookout we sped down another steep trail behind Coonowrin.

We usually come this way on the homeward stretch of our Glasshouse Rides. The water bars and twisting turns are magical to ride on a bike.

But I had a different twist in mind… 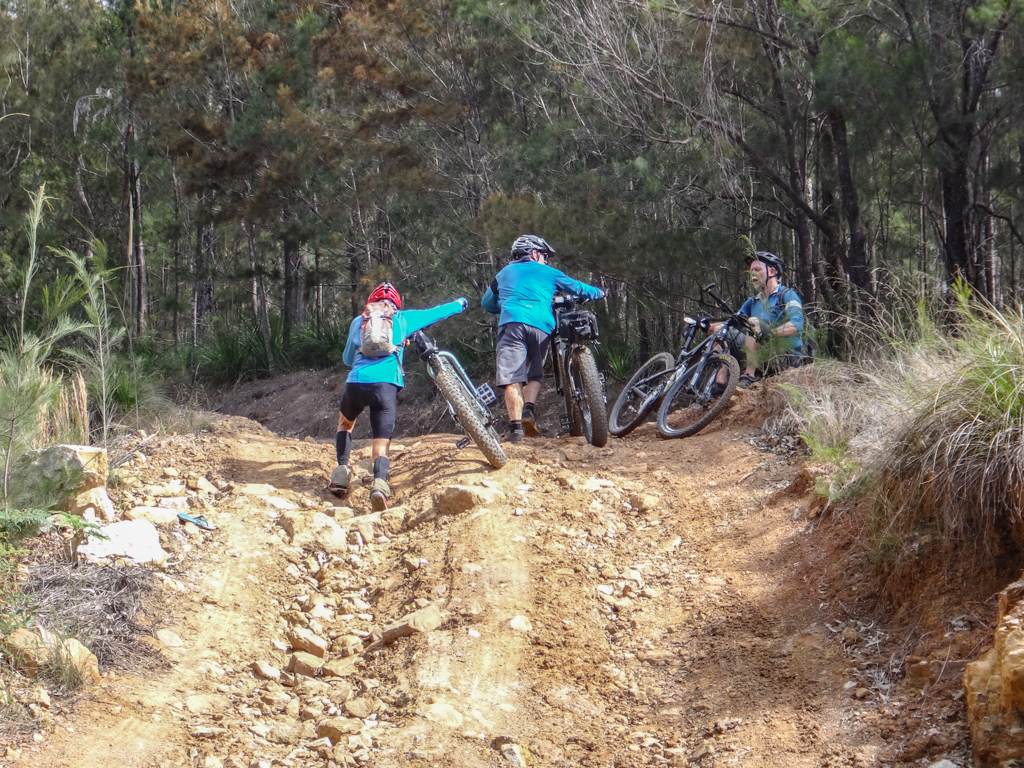 I explained to everyone, “If we follow the tracks behind Mount Coonowrin we can avoid Old Gympie Road”

It sounded reasonable in theory.

But the trails were too steep. While Darb nailed the climbs impressively, I admitted this probably wasn’t the best track on which to bring a tired bunch of people towards the end of a hard ride. 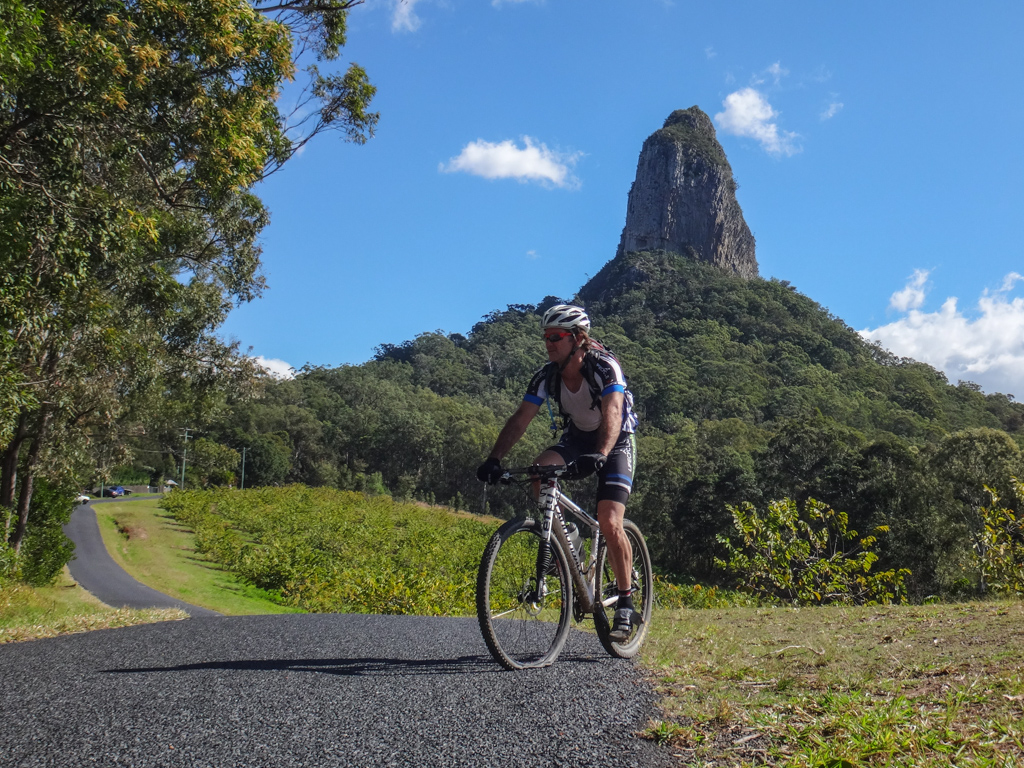 In the Kabi legend, Coonowrin was the fearful son who didn’t help his mother. As we rolled away from the peak I could imagine a defiant young mountain of a man folding his arms and looking down at us with disdain.

Back on familiar ground we followed the bike path back to our starting point.

We rode just under 40km in five and a half hours.

During that time we climbed about 830 metres in vertical ascent, and I burned about 2,600 kcal.

The Glasshouse Mountains are a spectacular riding destination. There are a variety of tracks with different levels of difficulty to suit riders of any skill level.

The tracks on todays ride were difficult. We won’t be using most of them in our social ride, but if you plan to follow the course we took today I’d rate it 8 out of 10 on the tough-o-meter.

If you’d like to see more of this wonderful place, why not join us in a few weeks time?

Thanks Darb, Paul, Jason R, Jason G and Calum for another fun day out on the bikes.