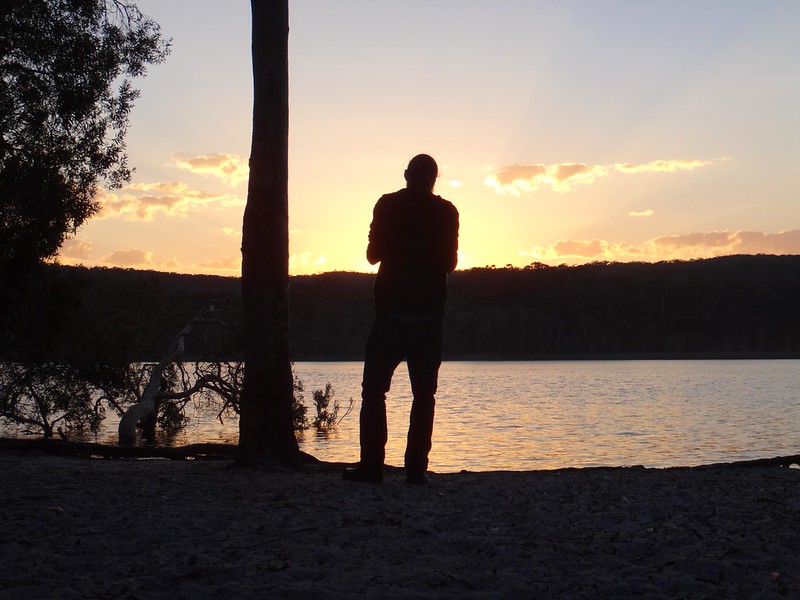 North Stradbroke Island is a stunning sand island which frames the eastern border of Moreton Bay, near Brisbane. It’s the second largest sand island in the world, after Fraser Island – a couple of hundred kilometres further north.

I spent a day roaming over this special place with my son, Jonathan.

Until about a century ago, it was one island. During a fierce storm, a ship laden explosives was wrecked on the Jumpinpin Bar. Local authorities detonated the explosives rather than risk a catastrophe while trying to retrieve the cargo. This weakened the sand bar, which allowed rough seas from the storm to break through, cleaving the island in two, forming a new passage between North and South Stradbroke Islands.

“Minjerribah” is the aboriginal name for Stradbroke Island. “Moorgumpin” is their name for Moreton Island. These islands, together with all of Moreton Bay are known as “Quandamooka” country. The Quandamooka Aboriginal people comprise three groups: The Goenpul and Noonukul from Minjerribah, and the Ngugi from Moorgumpin. 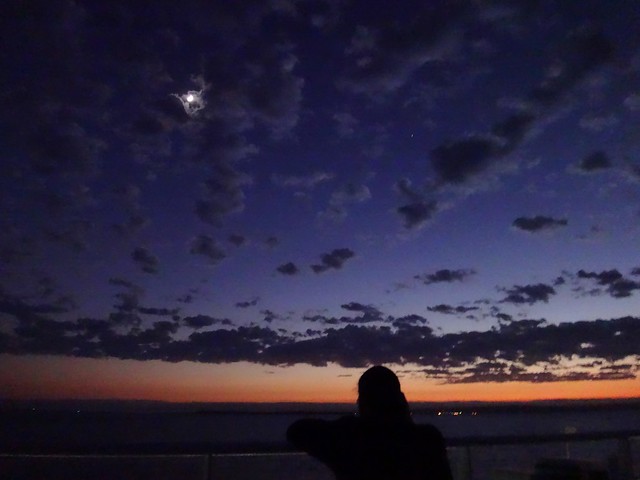 The only way to get to “Straddie” is by boat. Our ferry left Cleveland at 5:15am, so I had to get up at 3am in order to pick up Jonathan and get to the ferry on time. 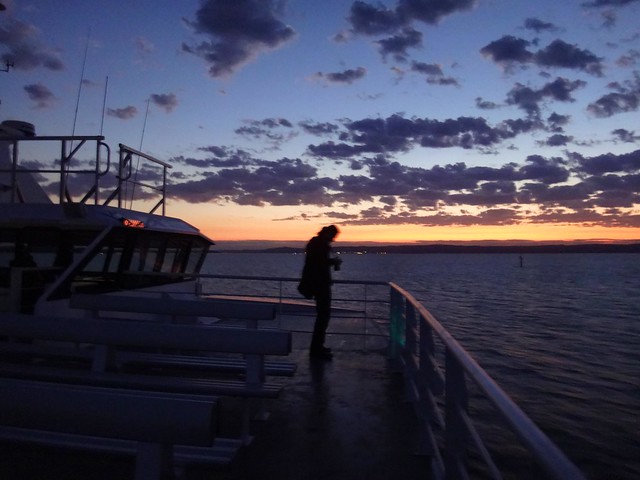 Bleary eyed, and dosed up to the eyeballs with strong coffee, we stood out on the deck of the ferry, “Big Red Cat”, and marvelled at the amazing dawn. 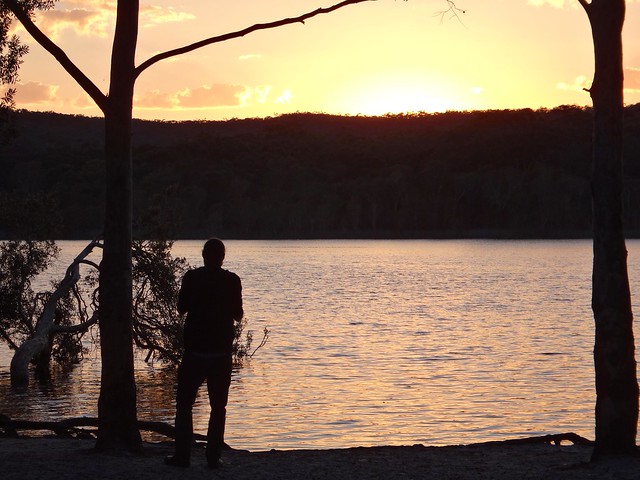 As we drove off the ferry, our first destination was Brown Lake – an elevated fresh water lake in the middle of the island. 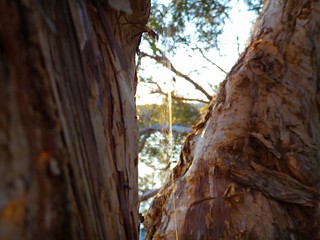 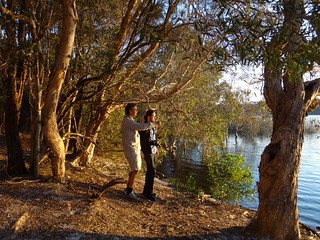 The sun was just rising over the hills as we arrived, so in true tourist fashion we gaped at the beauty while clicking off dozens of photos. It’s not every day you get to see a sunrise over a pristine freshwater lake.

A little further towards the east we arrived at the “Eighteen Mile Swamp” a coastal freshwater swamp stretching for almost 30 kilometres behind the coastal dunes. This amazing lake is the largest of its kind in the world and is home to a large number of rare and endangered species. 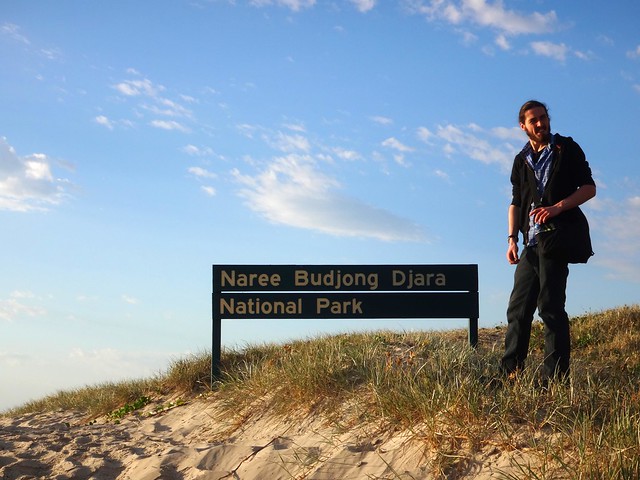 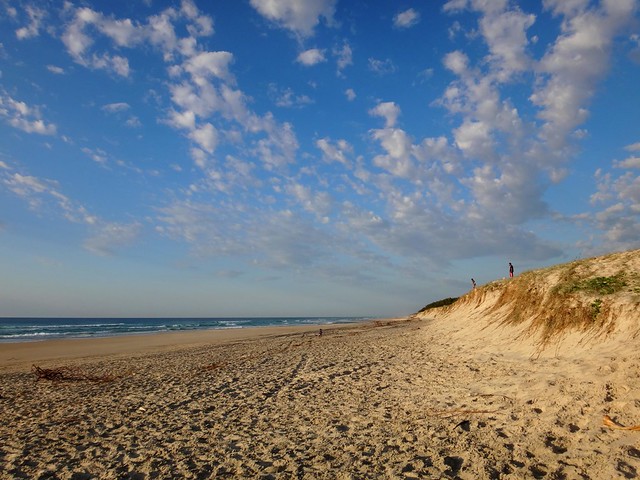 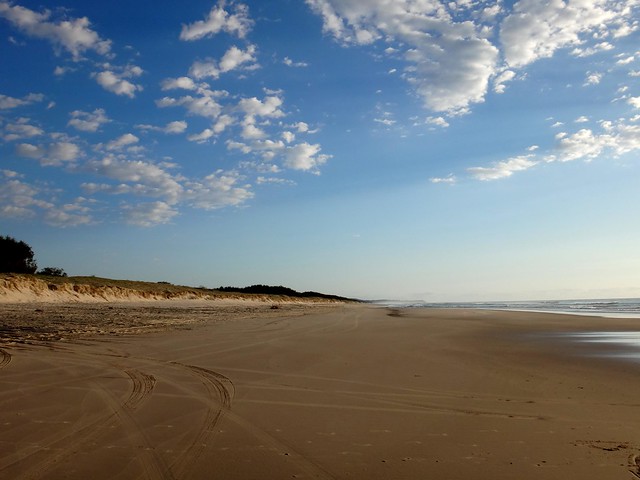 The beach here stretches as far as the eye can see in either direction. It was a wonderful feeling to be one of only a handful of people on the entire beach. Lots of space is good for the soul. 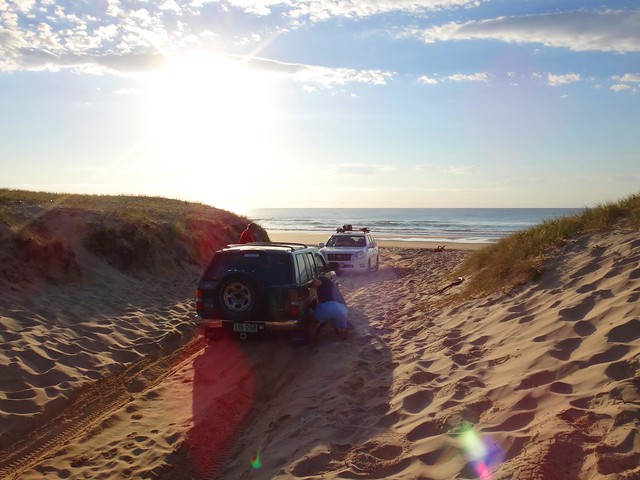 It’s important to remember that the beach is an official road, and that vehicles could pass by at any time. These drivers were bogged in sand and were desperately trying to free their car by scooping sand out from under the tyres.

As we made our way back from the beach, we stopped for a short walk around Toroise Lagoon – another fresh water lake that forms part of the “Blue Lake” system. 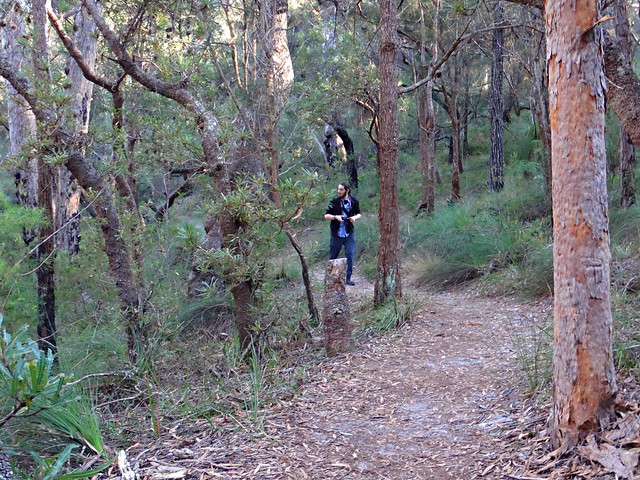 Because of my knee, I didn’t feel able to complete the full 6km walk around Blue Lake, but I felt pretty good about doing the shorter 3.5km loop around Tortoise Lagoon instead. 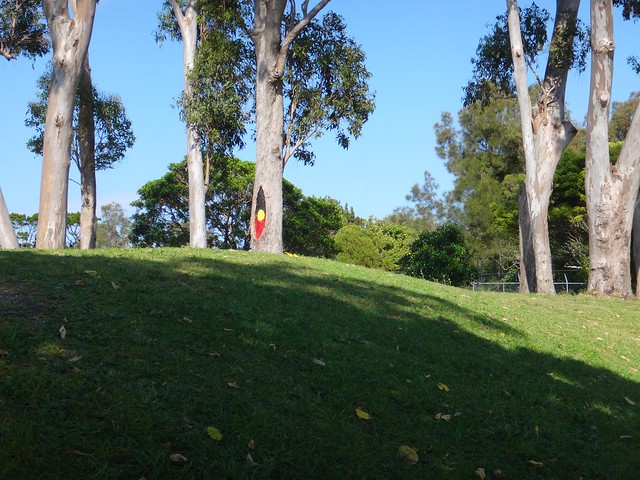 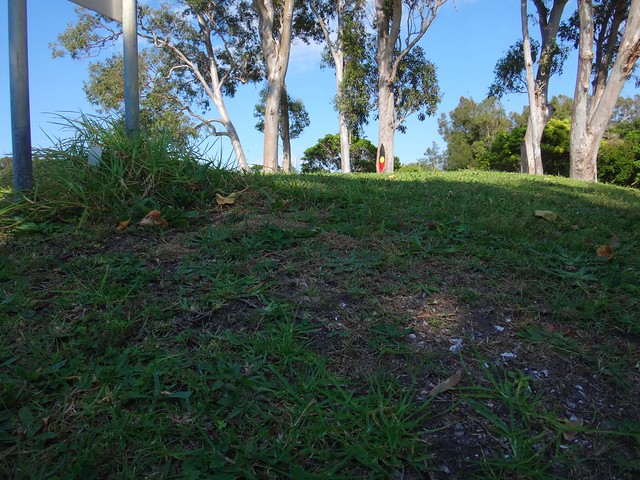 Back on the bay-side of the island near Dunwich, we checked out one of the few remaining Shell Middens on the island. Over centuries, Aborigines would sit around here, enjoying shellfish, oysters, crabs, etc. The left-over shells were discarded in a large pile. Over time this heap grew to several metres in width and a couple of metres high. I explained it to Jonathan as the remnants of a two-thousand year long indigenous seafood party. 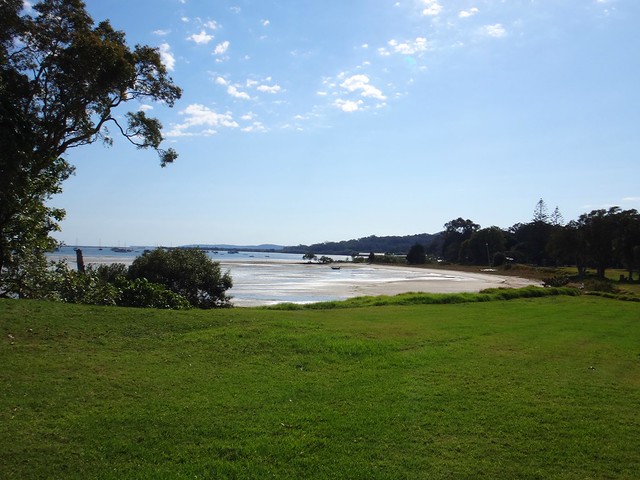 “Imagine being able to go out on the rocks and pick up a handful of Sydney Rock Oysters, or Moreton Bay Bugs whenever you wanted”, I said to Jonathan.

Before European colonisation, this place was paradise. Life here must have been full of contentment. 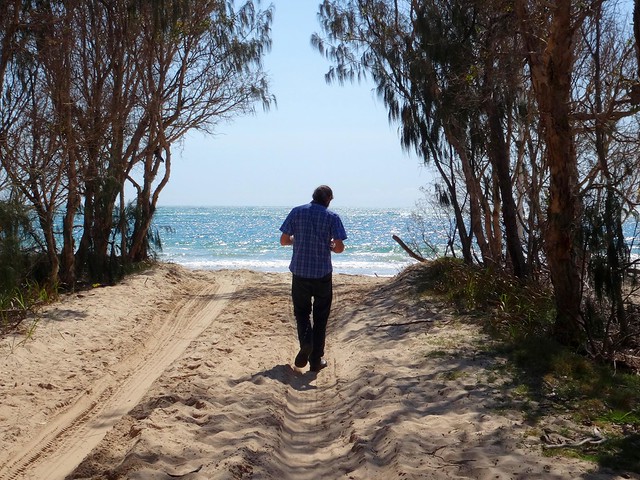 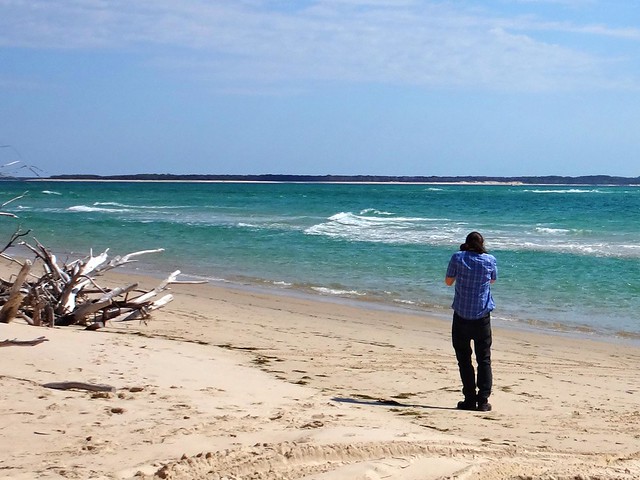 We then made our way northwards towards Amity Point, at the north-western tip of the island.

This is a fascinating point for a number of reasons:

It’s not far from here across the treacherous South Passage to Moreton Island. This is a dangerous passage because of shifting sand bars, strong currents, and unpredictable conditions.

At this point in 1823, the local Aboriginal people had their first face to face contact with Europeans. Last week I wrote about three shipwrecked ticket of leave convicts who were rescued by John Oxley on Bribie Island. Finnegan, Parsons and Pamphlett were washed ashore on Moreton Island. The Ngugi people on Moreton kindly fed these poor begraggled strangers for two weeks, and then rowed them across the South Passage to Amity Point. The Noonukul cared for them for another five weeks before eventually sending them on their way across the bay to the mainland via Peel Island, coming ashore near Ormiston. 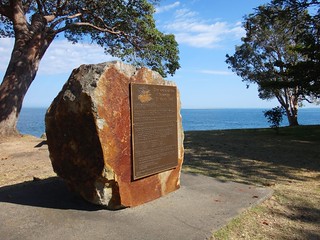 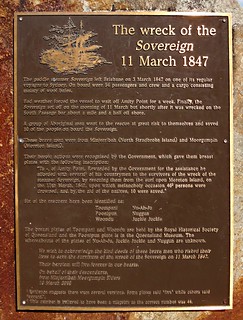 A couple of decades later, Europeans were colonising Moreton Bay, including the Island. Amity Point was chosen as a Pilot station because of its proximity to the South Passage. The Cargo Ship, Sovreign, was moored off Amity for over a week in heavy weather. She attempted to clear South Passage, but was wrecked in the process, going down about two kilometres off shore.

A group of Aboriginal men, some from Minjerribah, some from Moorgumpin swam to the wreck, at great risk to their own lives. They were able to save the lives of ten passengers. Unfortunately, 44 people drowned.

It was a tragedy, but the aboriginal men were heroes, and were honored by the NSW government for their bravery.

Today, two of these brave men, Toompany and Nuggin, have streets in Amity named after them. 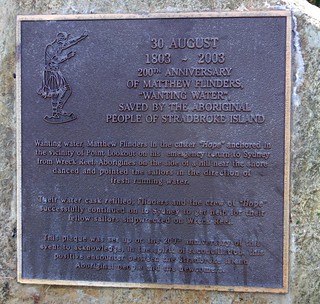 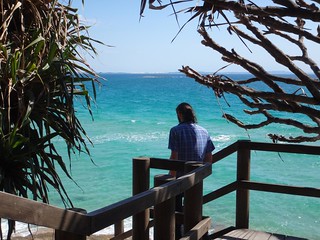 As we drove along the northern tip of the island, towards Point Lookout, Jonathan and I discovered more historical gems at Cylinder Beach.

In 1803, the colonial ships, “Cato” and “Porpoise”, were wrecked on reefs east of Gladstone. Matthew Flinders took the ship’s cutter, and decided to sail the small open boat back to Sydney with thirteen other men. After sailing 600 km south, they were running dangerously low on water, and anchored off Cyclinder Beach to find water. Some aborigines on the cliffs saw them, and signalled to them where they could find fresh water from a small creek nearby. After refilling their casks, the crew were able to complete the perilous 1,000 km voyage to Sydney. 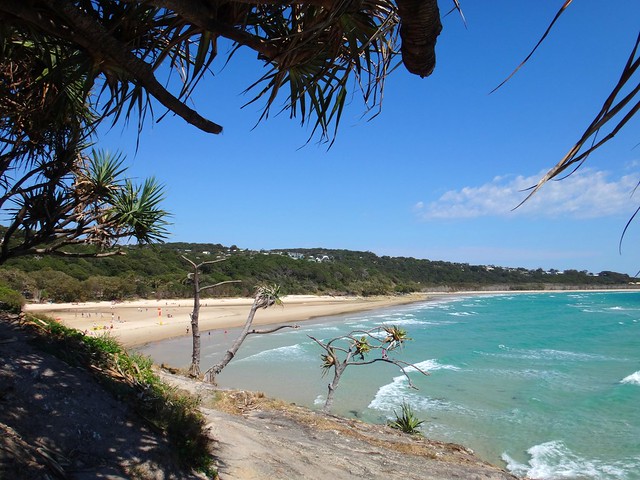 When we looked along Cylinder Beach today, speckled with holiday makers, it seemed a long way from the remote water stop for thirsty sailors over two centuries ago. 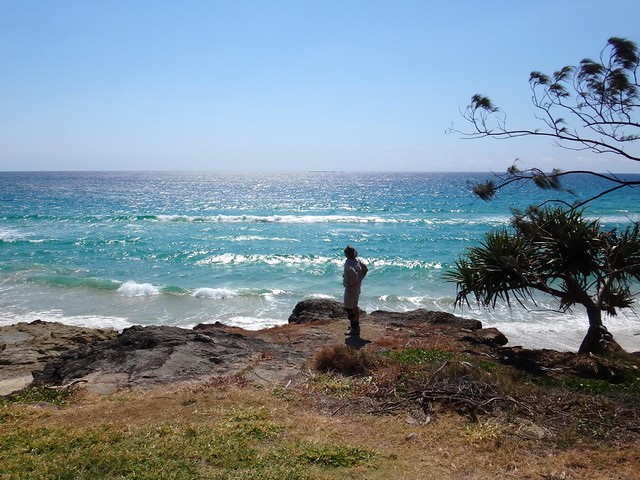 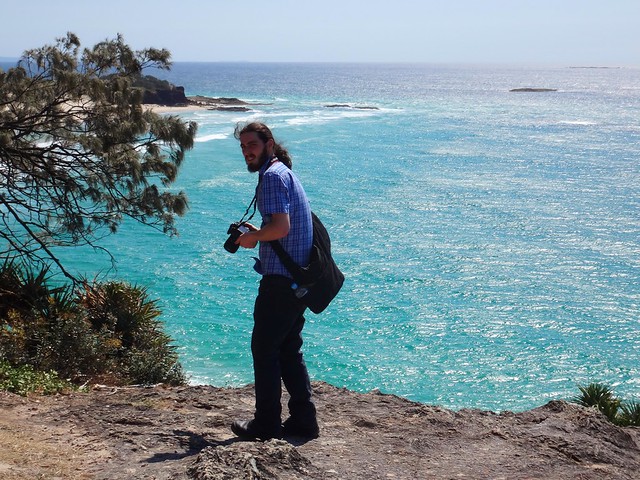 The warm turquiose ocean is stunning to look at here. As I soaked in the beauty it occurred to me that the original inhabitants of this place were fortunate to live happy, healthy lives in one of the most bountiful places on the planet. They enjoyed a standard of living higher than most of the Europeans who were trying to colonize them. In most early contacts, they responded with kind-hearted generosity.

Thomas Pamphlett came from the north of England during the industrial revolution. It would have been cold, dirty and crowded. His poverty would have made it difficult to find food to eat each day. I wonder how he would have remembered his seven weeks in the sun with the Quandamooka people? 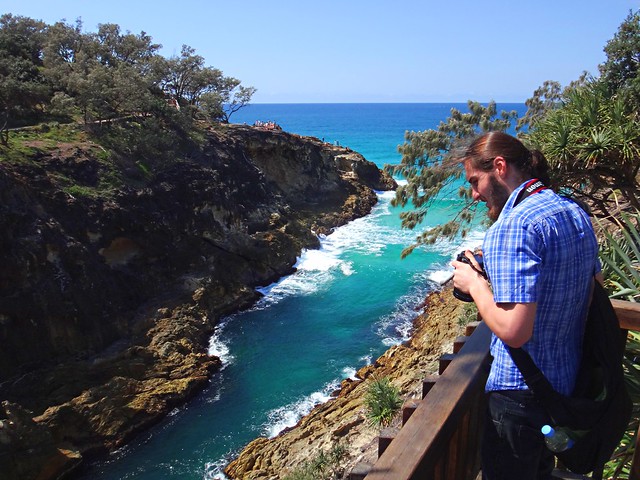 At Point Lookout, on the north-eastern tip of the island, we walked around North Gorge. This is a spectacular inlet where the waves rush up the narrowing gorge. 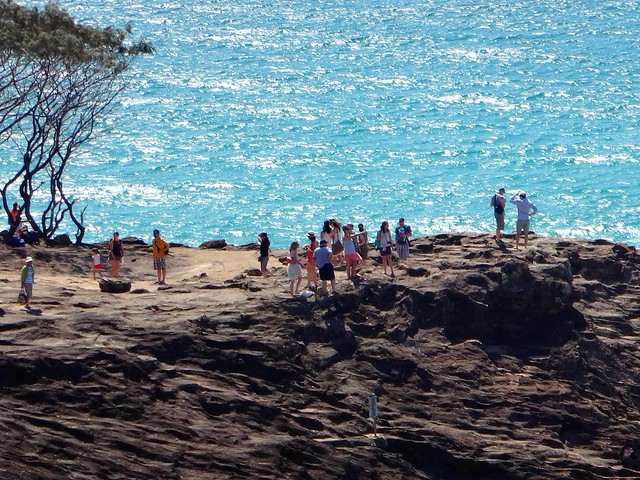 It’s also a great spot to gaze out at the Pacific Ocean and watch for migrating Humpback whales. 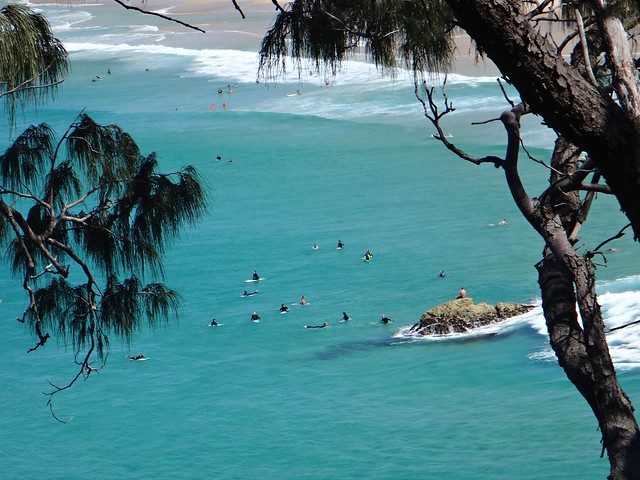 You wouldn’t believe it was the last day of “winter” – the warm water was full of surfers. 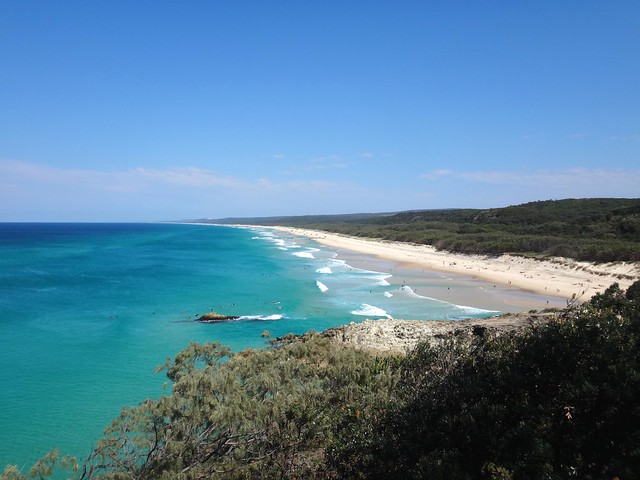 From the headland we were able to look southwards down Main Beach as far as our eyes could see.

What an amazing place. I’m definitely coming back here on a bike when I am able 🙂

All up we travelled about 220km. It was 55km each way to the ferry at Cleveland, 10km each way across the bay and back on the ferry, and about 100km of driving on the island. To take a car on the ferry costs about $140, although during the winter months if you catch the early ferry it only costs $80. For a car with 4 or 5 passengers all contributing to the fare, it works out pretty cheaply.

We spent 9 hours on the island and didn’t feel rushed looking at all the things we wanted to see.