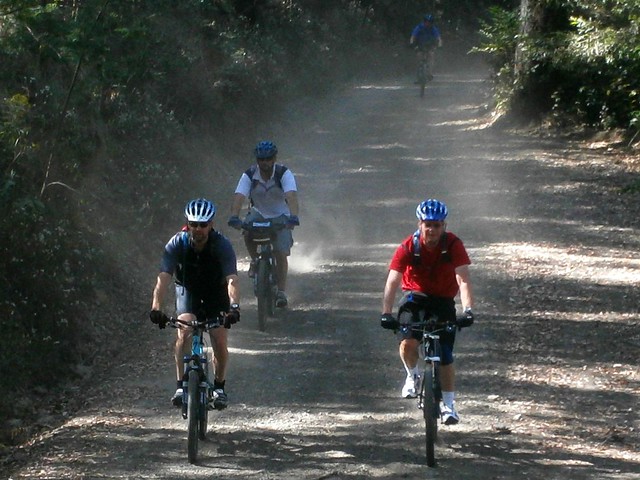 My friend David told me he and a few mates were interested in exploring D’Aguilar National Park. So I jumped at the opportunity to organize a social ride along some of my favourite tracks there today. 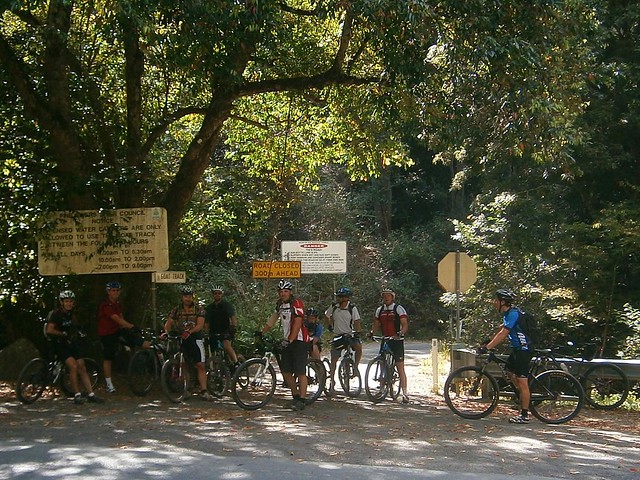 As with most expeditions in D’Aguilar NP, this one started with a short climb up the Goat Track which affords great views out to Moreton Bay, but you’ve got to work for it as you climb 400m in just over 3km. 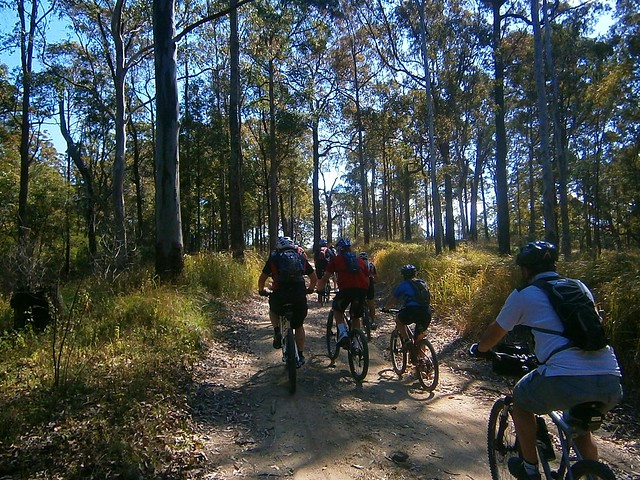 Rather than follow the bitumen at the top, we elected to ride up Hammermeister Road – a steep dirt road to the west of Mount Nebo. The road is named after Lou Hammermeister who started working in the timber industry at Mount Nebo during the Second World War and continued there for almost twenty years.

According to the Mt Nebo local newspaper “Mountain News“, Lou lived at Mount Nebo for over 60 years. He blazed any of the roads and fire trails in the area using his dozer. He also used his dozer to help build an Oval and Tennis Court at the Mt Nebo School. Lou started as a timber cutter, moving to Main Roads when logging at Nebo ceased in the 1960’s. As someone who regularly rides at Mount Nebo (including Hammermeister Road), I am grateful for Lou’s legacy. 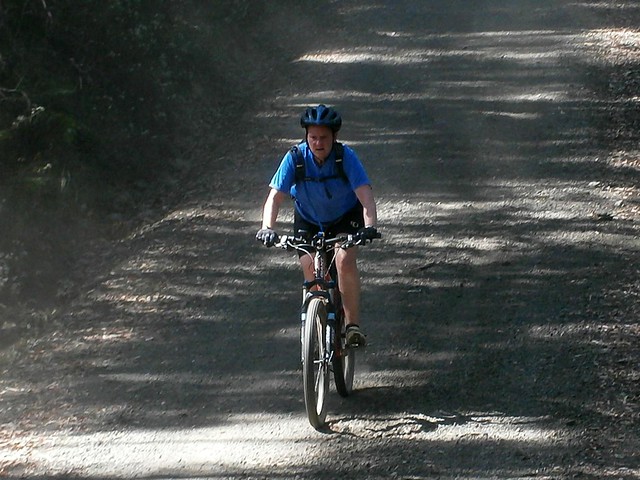 A lot of my friends enjoyed Lou’s legacy today too 🙂 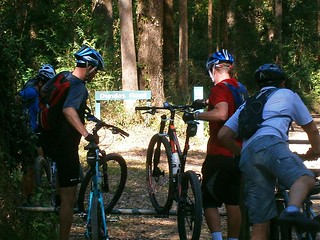 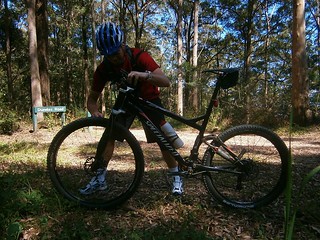 From there it’s a short jump to Dundas Road behind the transfer station at Mount Nebo. This is where the long descent to England Creek begins. A few of the riders, including Jeff (pictured) took the opportunity to drop some of the pressure in their tyres to get a bit more grip on the dusty track surface. It was then I realized Jeff was riding a hybrid bike. It had a 29 inch front wheel and a 26 inch rear wheel. Bikes with 29 inch wheels are affectionately called “Twenty niners”. But when you’ve got “one of each” on your bike, the collogual term for the bike is a “Sixty-niner”. Jeff’s bike is even stranger. The front fork only has one staunchion on the left-hand side. So this is the only “Lefty Sixty-niner” that I’ve ever seen. 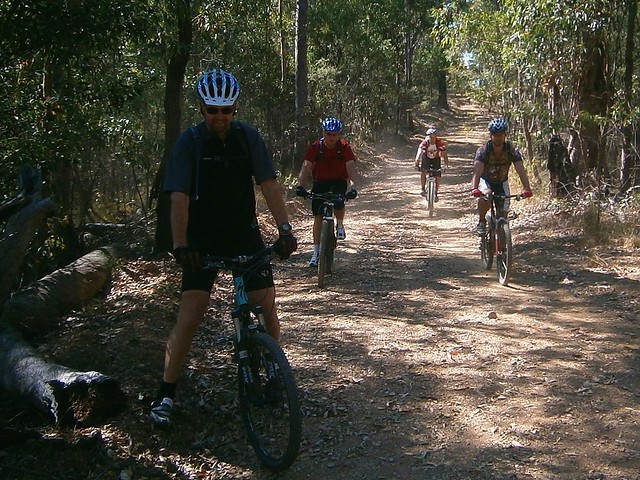 From Dundas Road we rode into Goodes Road and enjoyed the quick drop down the mountain. It’s difficult to enjoy the spectacular views while riding so fast, but I think we managed. One of the “surprises” on Goodes Road is a gate across a steep section of road half-way down, which can sometimes cause riders to skid as they grab the brakes to avoid hitting the gate. 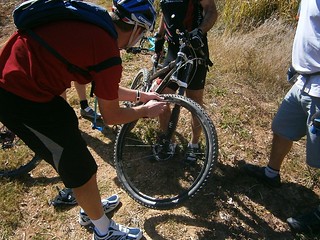 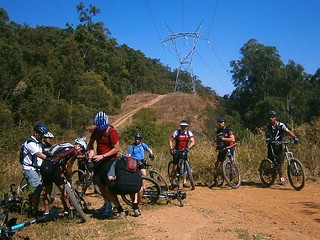 Unfortunately, Jeff got a puncture during the descent. This was when I discovered another surprise about “lefty” forks. You don’t need to remove the front wheel to change the inner tube. Since there’s only one staunchion, you can remove the tube while the wheel is attached. Amazing stuff. 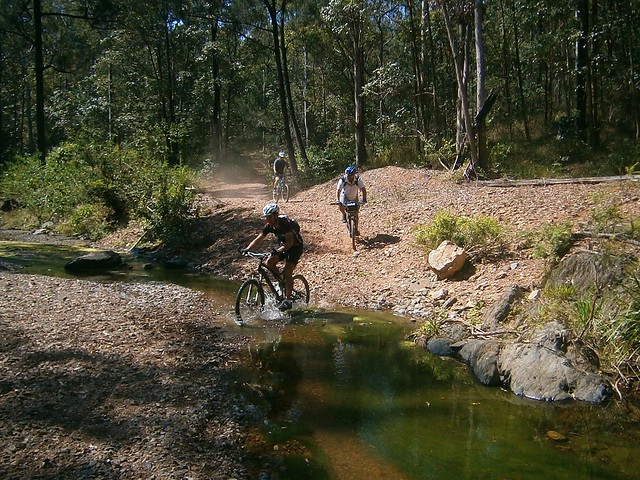 After fixing the puncture, we enjoyed the final sketchy descent down to England Creek and splashed through the creek crossing before having a break. 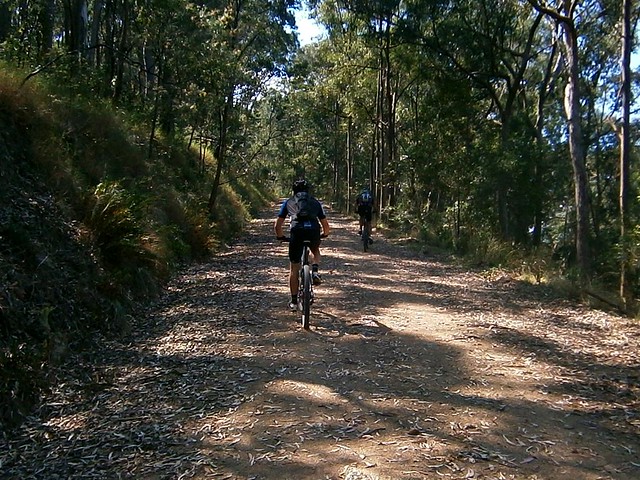 It’s worthwhile having a break at England Creek because it takes about 90 minutes to ride from there up to the top of the hill on Joyners Ridge Road. It’s not steep (as mountain bike hills go) but it is still a long climb. 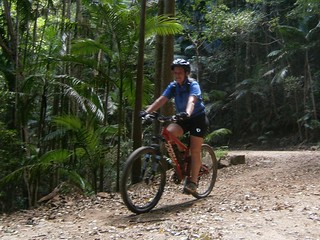 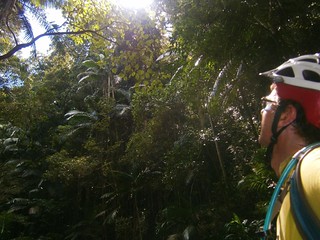 The highlight of riding up Joyners Ridge Road is reaching the Rainforest at the top. It’s a lush, cool, green reminder that the climb is over. I think we all heaved a sigh of relief once we reached the top. 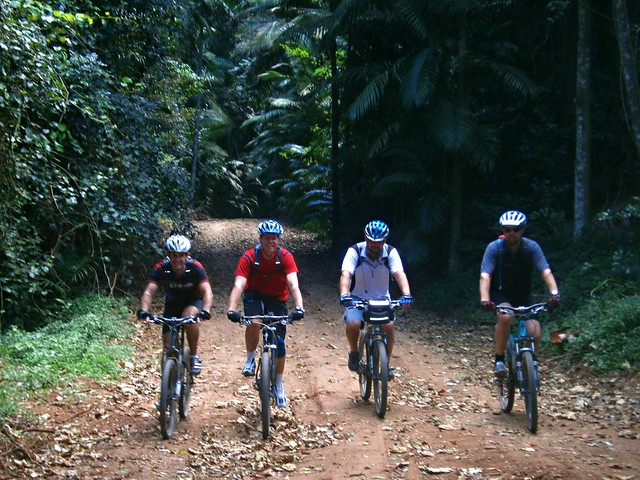 All up, this ride was about 35km with about 1,300m of vertical ascent. It took us 5 hours including breaks and repairs (we had a long lunch at the Mt Glorious Cafe), and I burned about 3,000kcal. Wtih todays perfect cool spring weather, I rate this one 7.5 out of 10 on the tough-o-meter. Add an extra point in summer or wet weather.