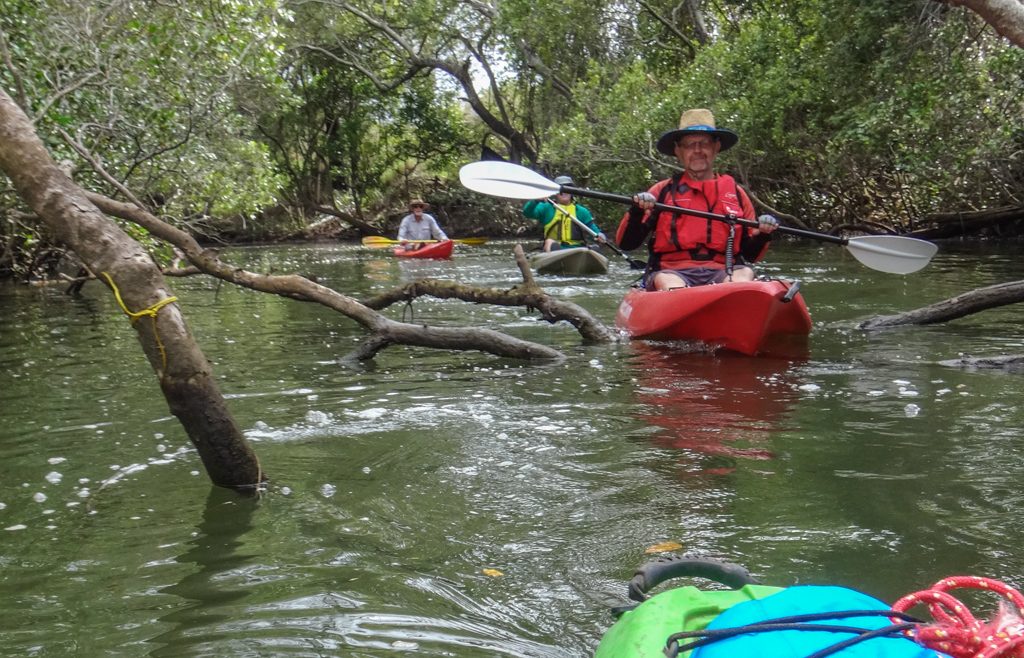 Today we decided to paddle instead of pedal, following the North Pine River downstream to some places you don’t get to see on a bike. 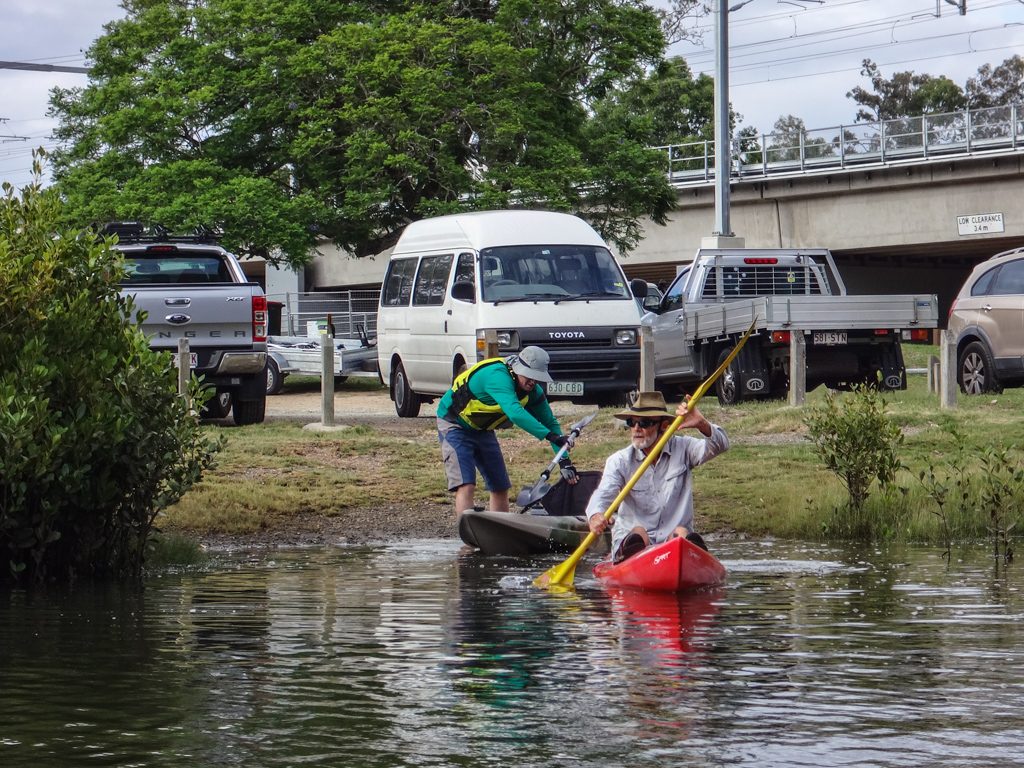 Even though it’s twelve kilometres up-stream from Moreton Bay, the river here is strongly influenced by tides. We launched our kayaks into the river at Leis Park just down the road from my place. The deep high-tide water was perfect for newbies like me who didn’t have a clue about how to use a kayak.

Drifting slowly downstream on the calm early morning water I had a familiar thought: “We’ve come to the right place”.

In the lead-up to most of our adventures I often wonder if my plans will live up to our “No boring rides” motto. Most days, after the first five minutes I secretly give myself a thumbs-up. “Yep – today is going to be fun”. Today was no exception. 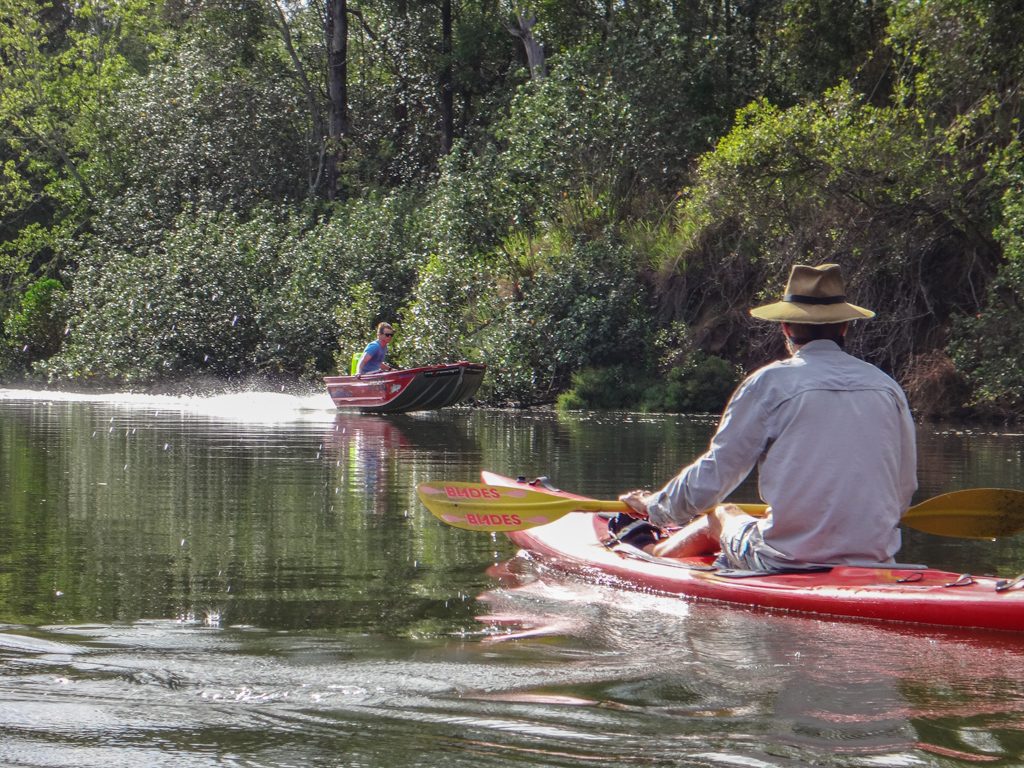 “Car up!” someone called out in jest.

Normally when you’re on the road on a bike, and a car approaches, you yell “Car back!” or “Car up!” to alert your buddies to the traffic. On the river we decided it was no different, except we had to contend with the wake of boats rocking our little kayaks as they zoomed past. 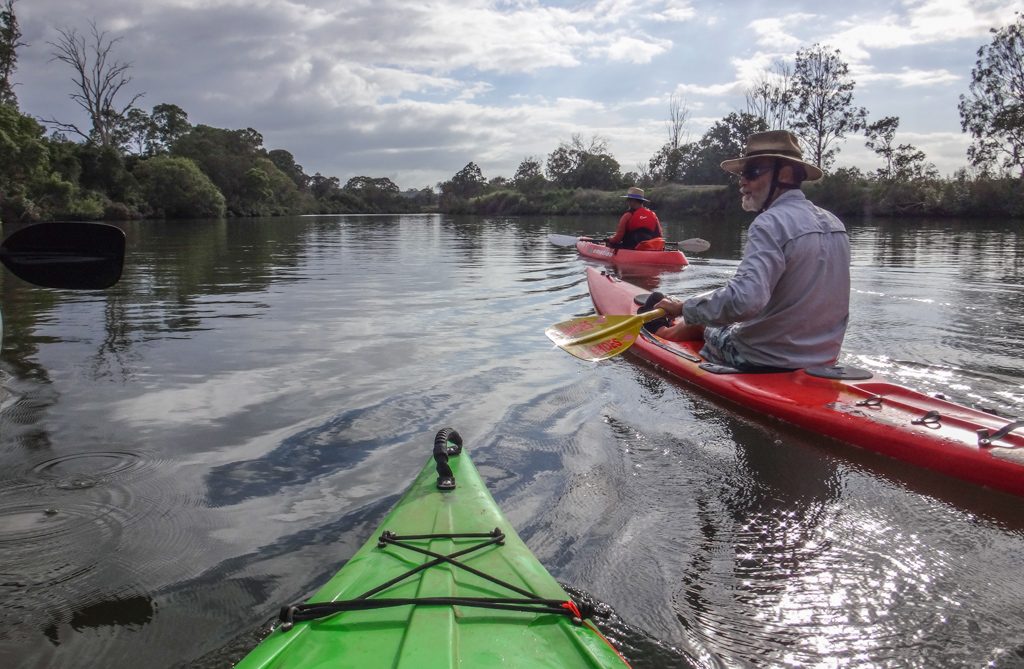 Calam is an experienced paddler. He explained to me that the secret of paddling is to use your back, not your arms, to pull the paddle.

“Put the paddle blade in the water. Pretend you’ve stuck it in honey. Twist your back to pull yourself forward rather than trying to push the paddle backwards.”

“Hmmmmm. Honey!” I thought to myself as I twisted myself through imaginary nectar. It seemed to work. 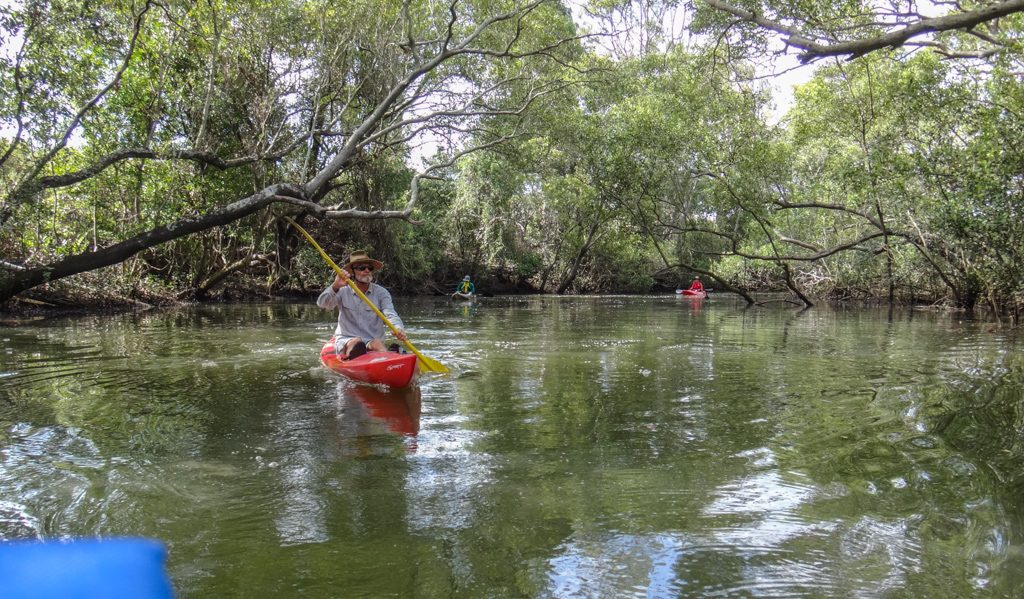 After a few minutes we reached Yebri Creek.

I’ve been curious about this creek for years.

In 1824 some settlers from the Redcliffe penal colony rowed up this creek to fell a large hoop-pine. Some local Turrbal aborigines were impressed by the effectiveness of the colonist’s axe and tried to steal it. In the ensuing misunderstanding the colonists shot and killed one of the aborigines.

“Yebri” in the Turrbal language means “Put it down”. 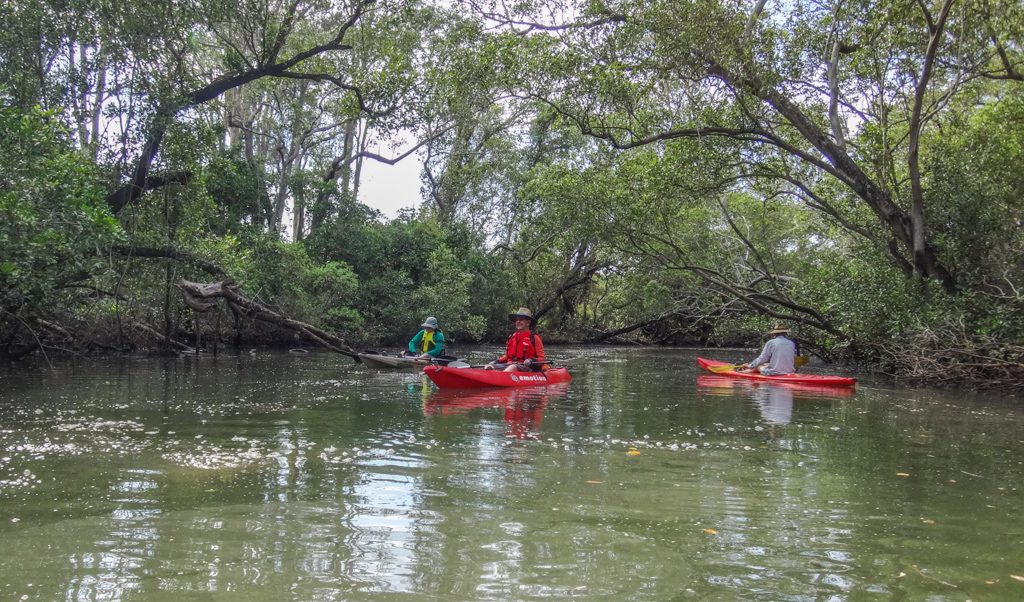 The mangroves closed in. The sulphuric smell intensified. We decided we’d had enough of Yebri Creek for today and followed it back to the river.

I found paddling very similar to pedalling. We kept up a gentle rhythm as we drifted past beautiful scenery and chatted happily to each other.

The river was perfect. There was no strong breeze. The current was gentle. I felt like I could do this all day. 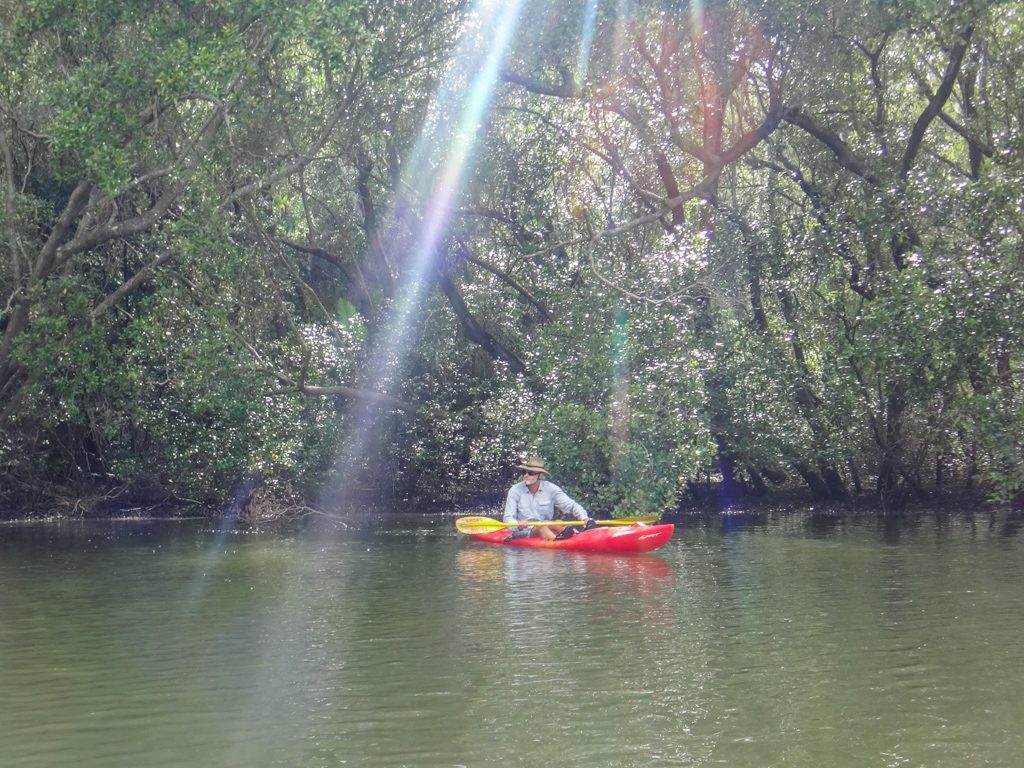 Our next historical stop was John Oxley Reserve.

Explorer and surveyor, John Oxley came ashore here and was impressed by the tall straight hoop pines. As a mariner he saw their potential as raw material for ship masts which needed to be true, strong and tall.

Sadly, there’s only one solitary hoop pine that remains in the reserve. Presumably many of them were used on British ships. 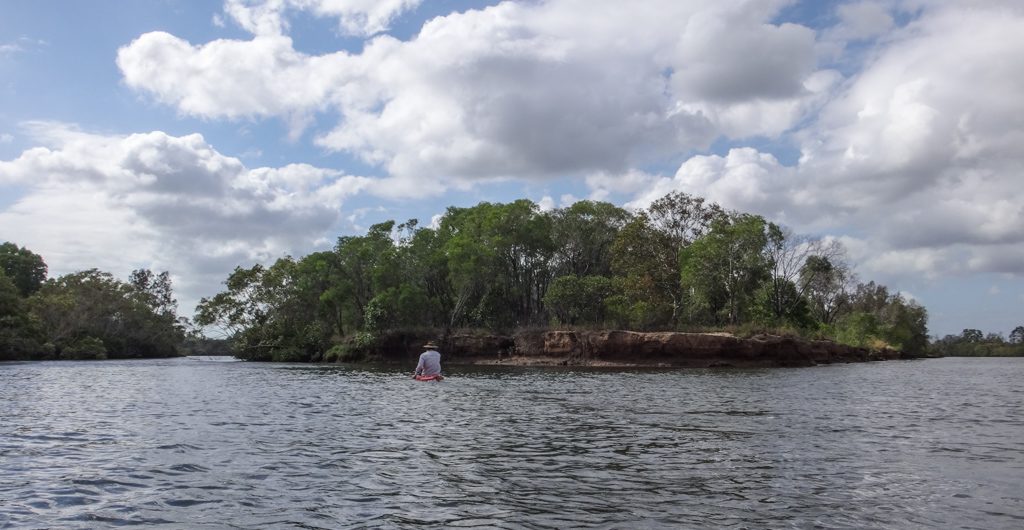 Further downstream, the river fans out into a series of islands. Calum pointed out one section which had been promised as a marina by an over-enthusiastic developer.

People built roads, bought houses and waited, but the marina was never built.

As we floated past silently, I didn’t feel any disappointment. 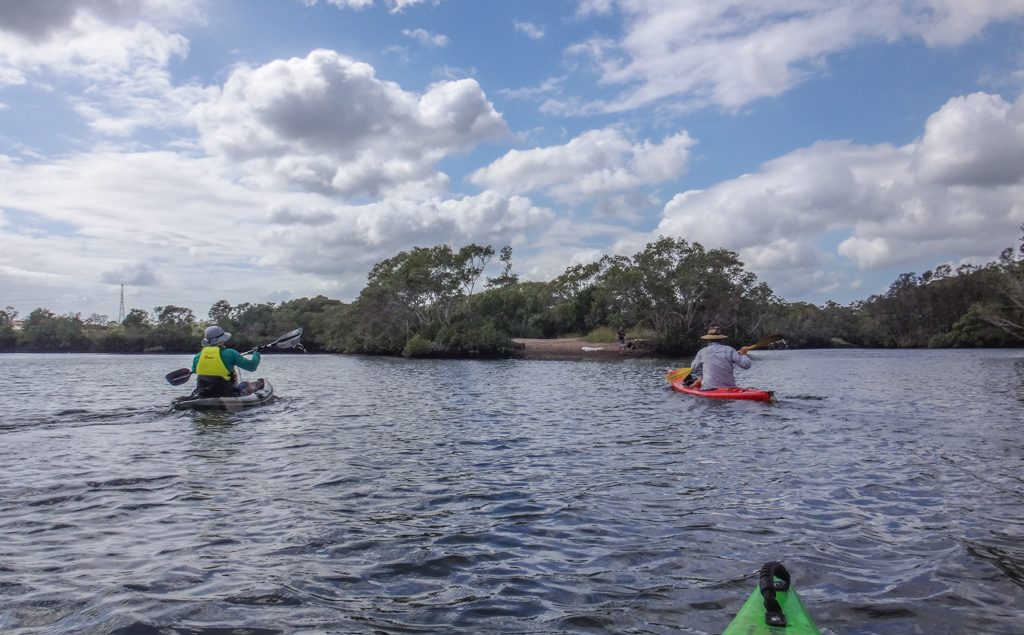 “Hey that looks like a nice spot to stop!”

We spied a small beach at the end of a green finger of land. 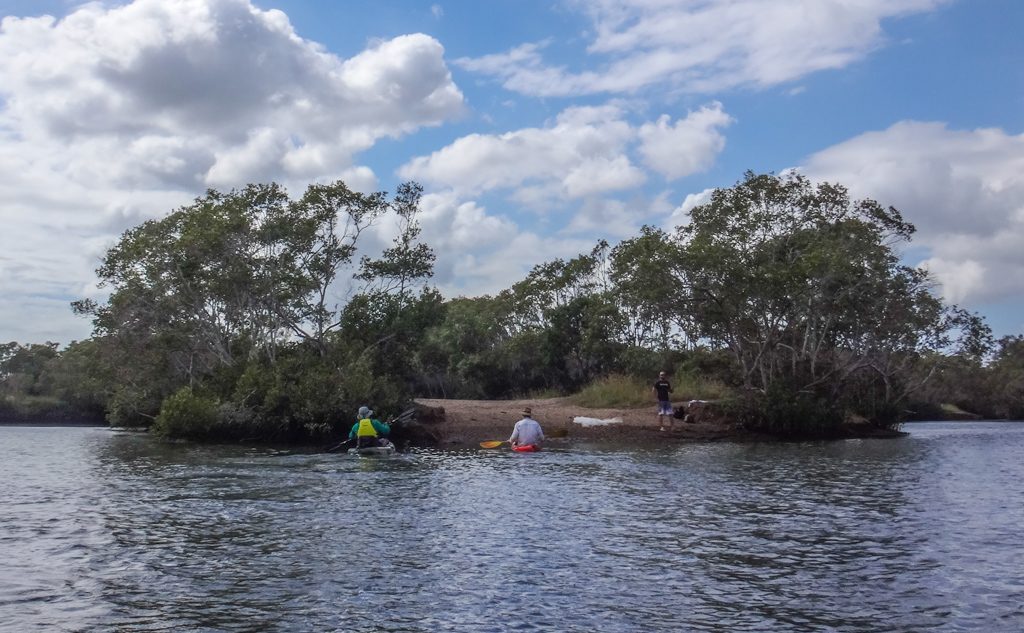 “Sorry to bother you, mate”

The fisherman didn’t seem to mind. 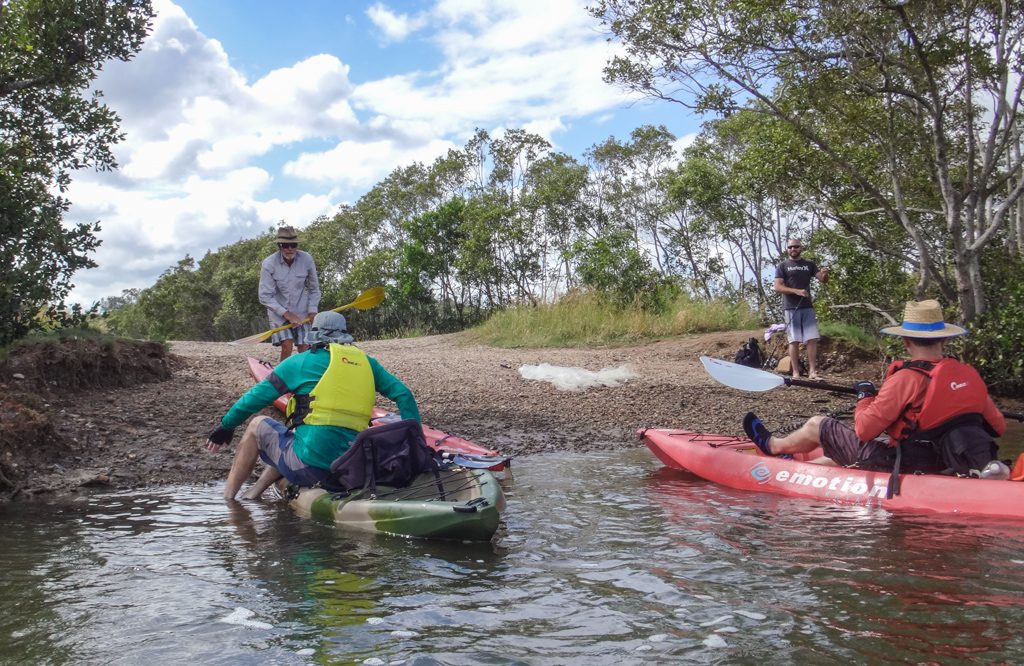 We beached the boats and hopped out.

It took me a bit longer to disembark. I’m still getting the hang of these kayak things. 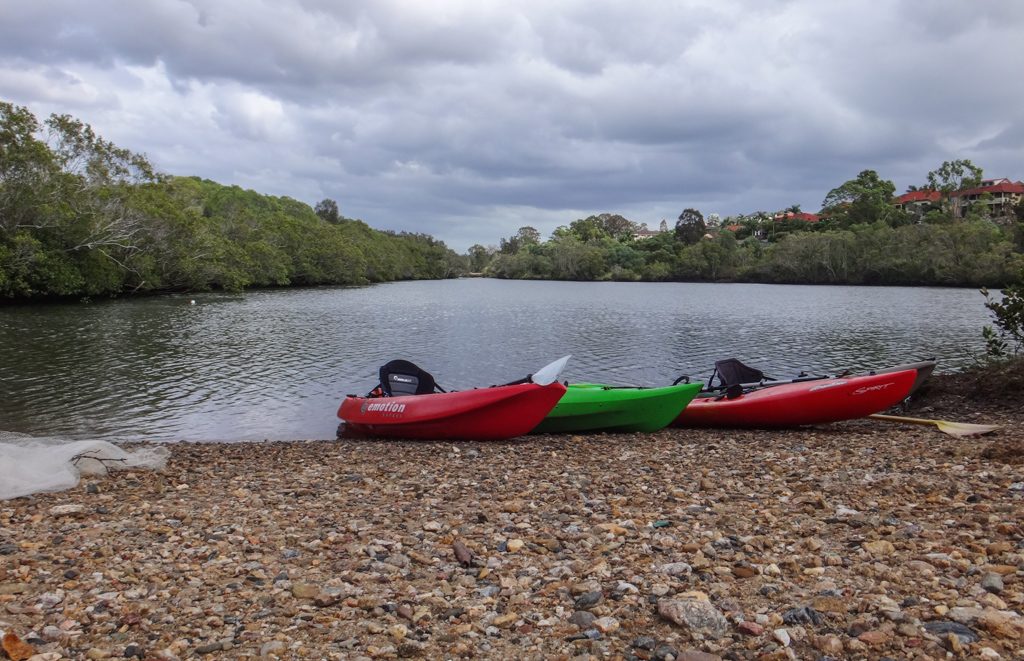 We squatted in the shade, nibbled on snacks and sipped water.

Paddling might be slower, but it didn’t seem to use as much energy as cycling. I didn’t need as much drinking water or snacks as what I would have used while riding a bike.

Paddling in open water might be different, but this gentle river was a perfect place to experience kayaking for the first time. 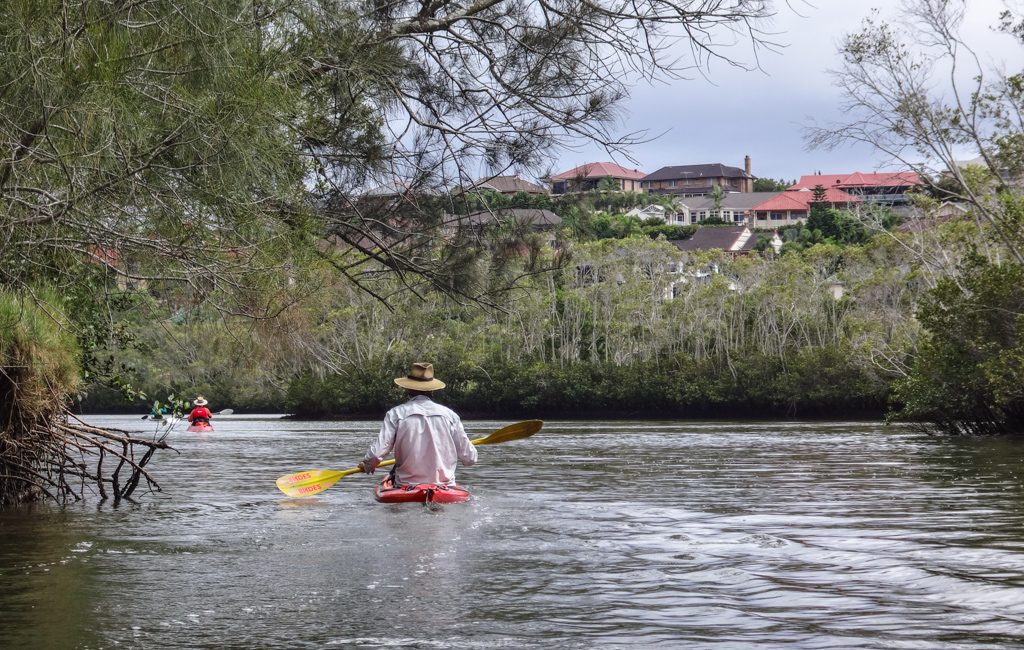 Back in the boats, we decided we’d reached the half-way point and pointed the bow (the pointy bit at the front) upstream. 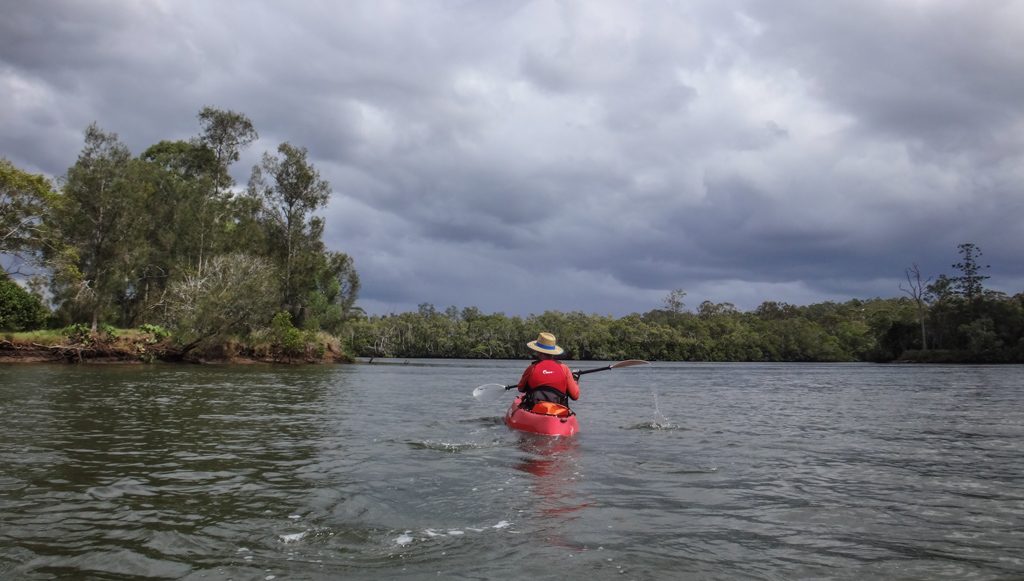 Now we were working against the current and the breeze.

In a typical lazy-cycling manoeuvre, I tucked in behind Russel to avoid the wind, and matched my pace with his.

We kept close to the “lee shore” so that the trees could shelter us from the wind. 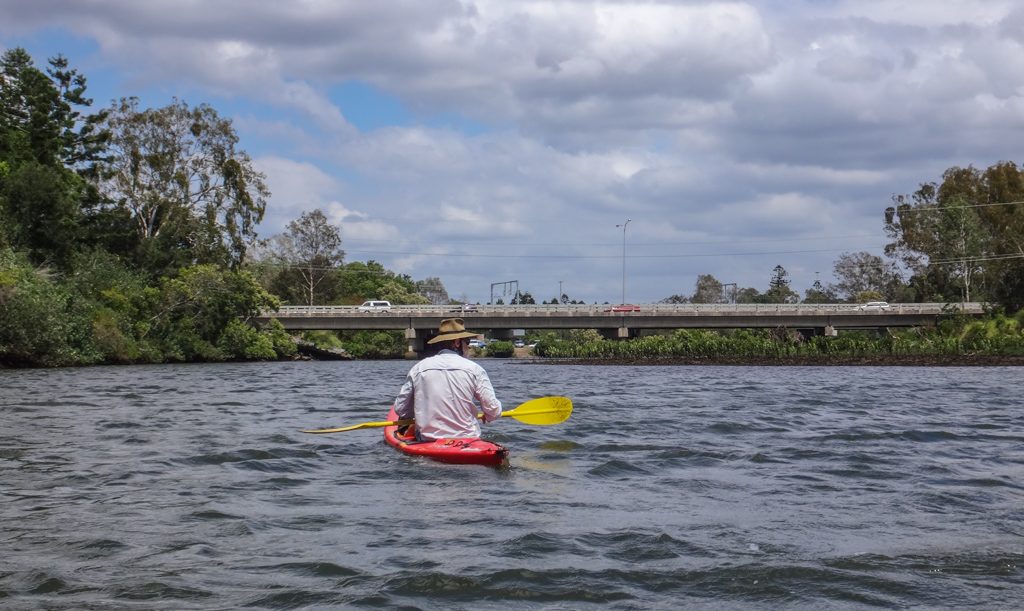 In a surprisingly short time we were back at the A.J.Wyllie bridge on Gympie Road at Lawnton. 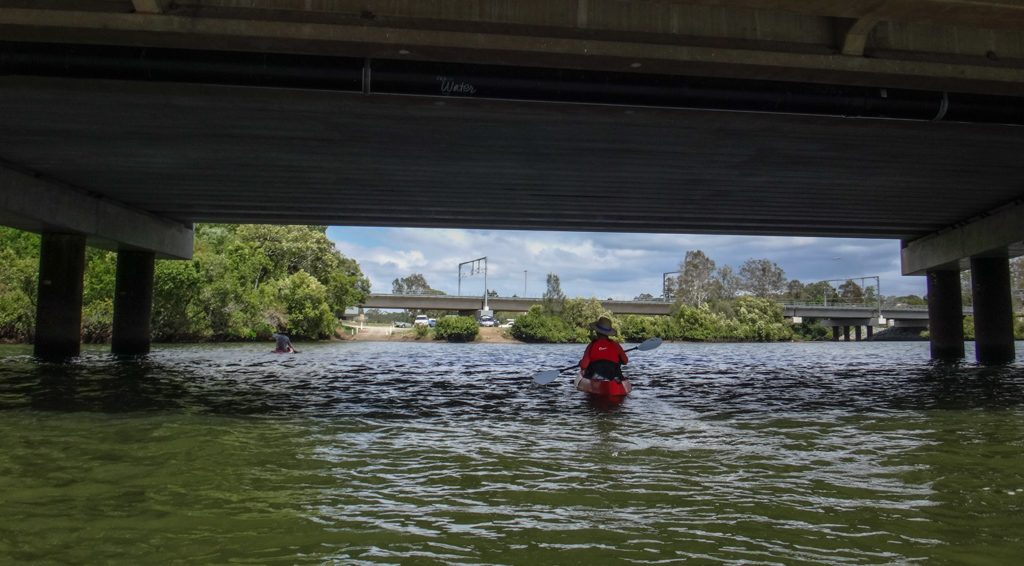 I felt a bit “under done” and suggested to everyone that we paddle upstream a while before ending our adventure. 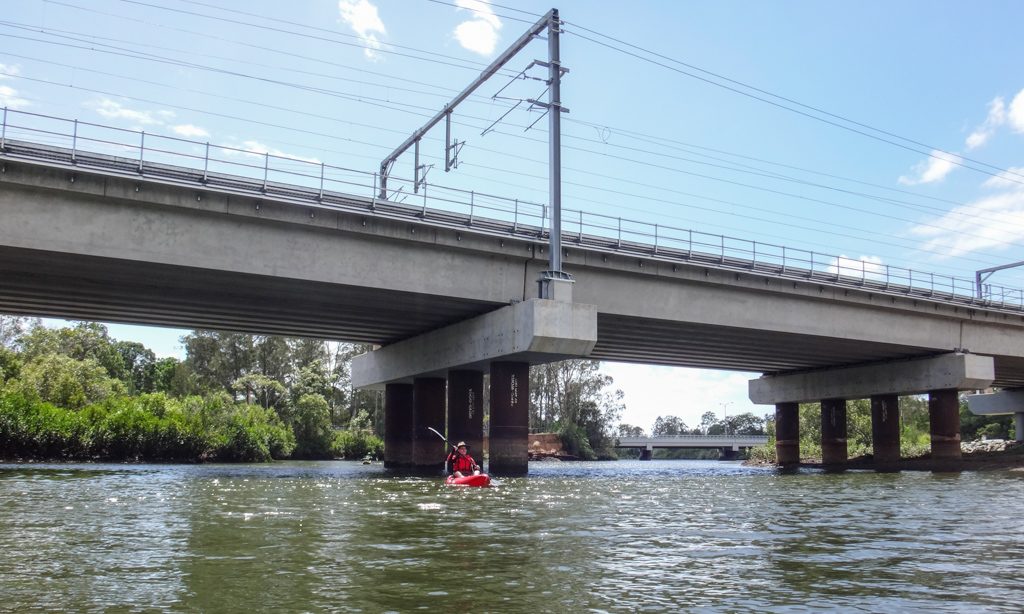 Under the new railway bridge we headed west. 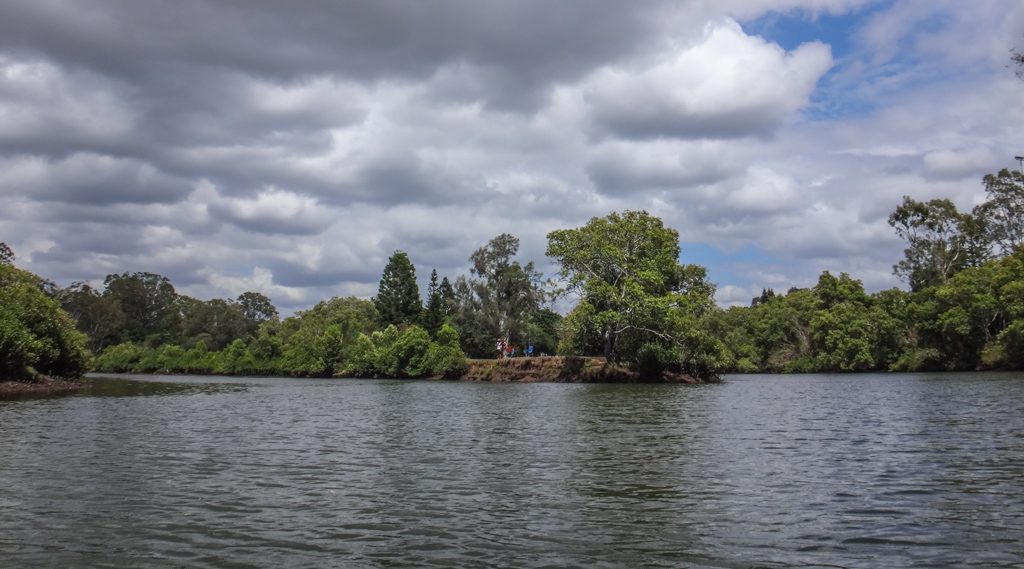 There’s a small inlet on the starboard (right hand) bank of the river as you head upstream.

Called “Mandin” by the local Turrbal people, it was used as a fish trap. When John Oxley rowed up here, he noted that aboriginal children had fenced off the opening of the inlet at high-tide, using reeds and sticks. As the tide flowed out, fish would get caught behind the reeds, which the children would catch.

Today there were no ingenious kids – just a few optimistic anglers hoping to catch the descendants of the fish that got away. 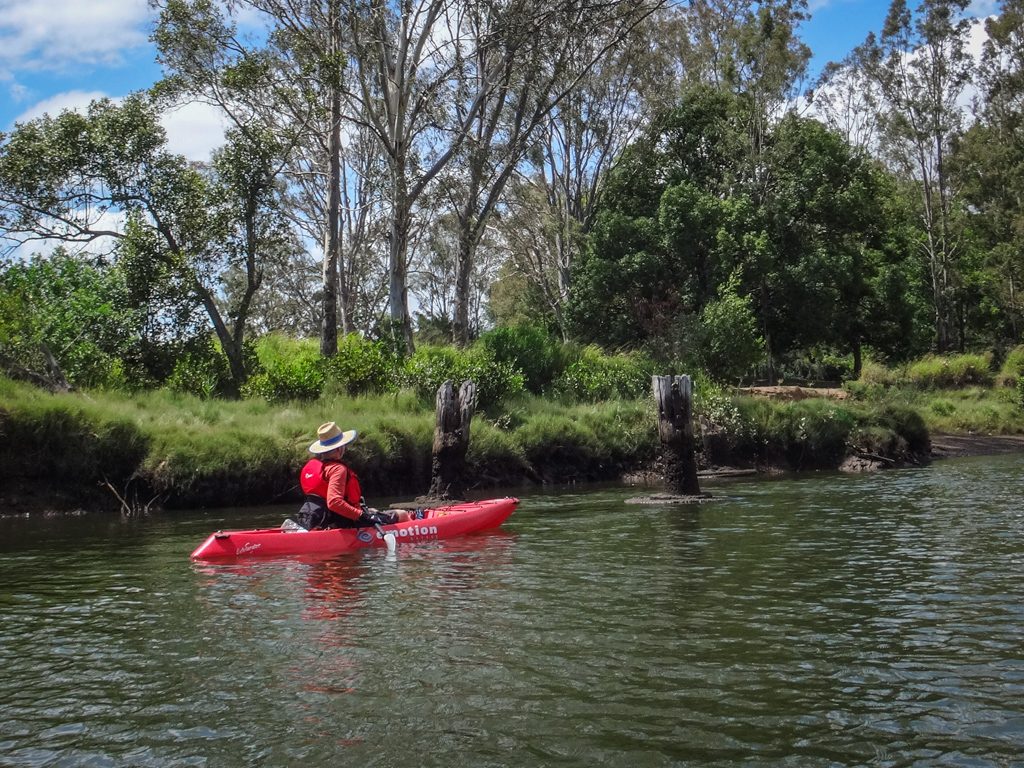 On the left we spotted a couple of old wooden pylons sticking out of the water – all that remains of the old Bruce Highway which crossed the river here in the early twentieth century.

It’s amazing what you see while floating on a river! 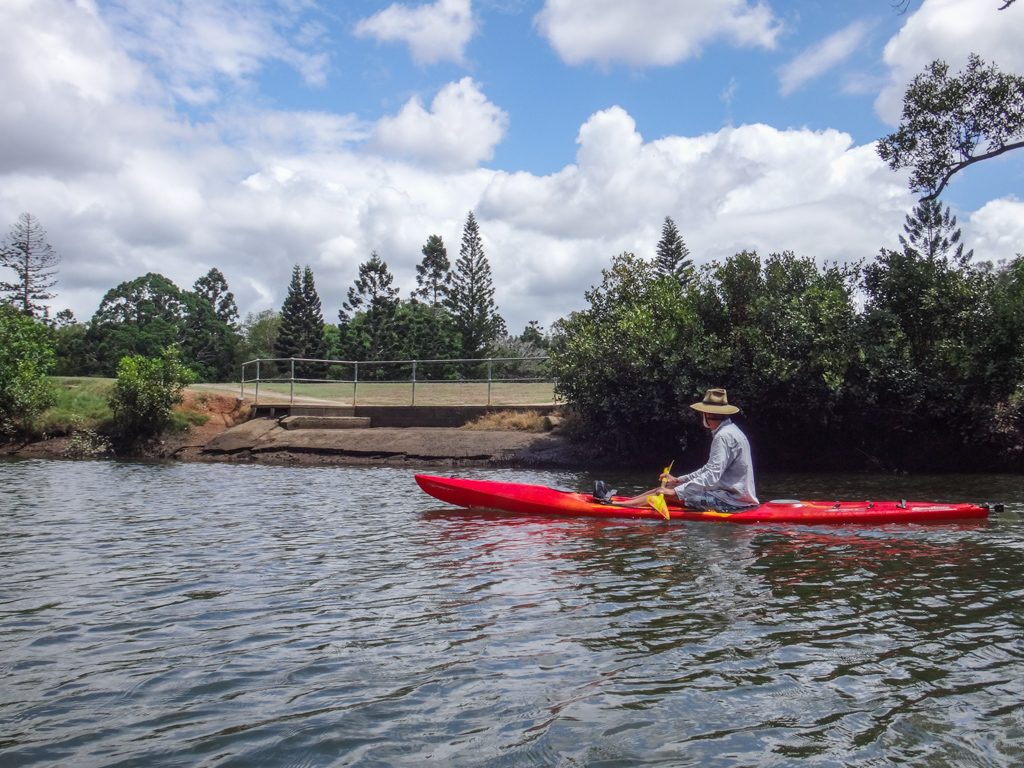 At Sweeney Reserve we decided we’d come far enough, let the boats drift to a halt, then slowly returned to the boat ramp.

Kayaks are heavy (especially the cheap ones).

We disembarked and dragged our heavy toys up the ramp and onto the grass.

During that time I burned a leisurely 650 kcal, and my Garmin says I gained 180 metres in elevation which isn’t true.

I’ll rate this one 3.5 out of 10 on the tough-o-meter. It was easy, pleasant and fascinating.

And just for the record, thanks to Calum’s “pushing through honey” advice, my arms and back felt fine the next day. I could easily do this again.

Thanks Russel, Adam and Calum for another fun day!