If you follow the Brisbane River as far upstream as you can possibly go, you’ll end up at Mount Stanley. It’s a beautiful secluded valley, but after a good downpour of rain, it’s spectacular.

We started the day at Linville, then drove the vehicles northwards in a convoy towards the starting point for the ride.

The crossings eventually became unsuitable for the smaller cars, so we parked by the side of the road, prepared the bikes, and set off!

Earlier in the week, I warned everyone: “Water will be over the causeways.  You’ll get wet feet”

But I didn’t anticipate such thick mud.

I walked through it.  Kaye showed me how real mountain bikers do it.  She clicked down a few gears and pedaled furiously.

I’ll remember that for next time.

A few kilometres later, the river split into two branches.  So did the road.

The Eastern Branch meandered off to the right.  We followed the Western Branch to the left.

The river crossed the road dozens of times

As I rode over the causeways, the water made a rushing noise when my front wheel cut through it, splashing cool droplets on my shins.

I felt like I was nine years old again.

Everything was green.  The whole valley felt alive.

I think I understand why rain and green paddocks make farmers happy, and why long dusty droughts are so heart-breaking.

As John Williamson sings in “Galleries of Pink Gallahs”

The drought appears to be over in this part of paradise.  The land and its inhabitants are sighing with relief.

We continued northwards up the valley over numerous crossings – each one submerged.

The signs at each river crossing kept tally of the number of times we had crossed the river.  16, 17, … 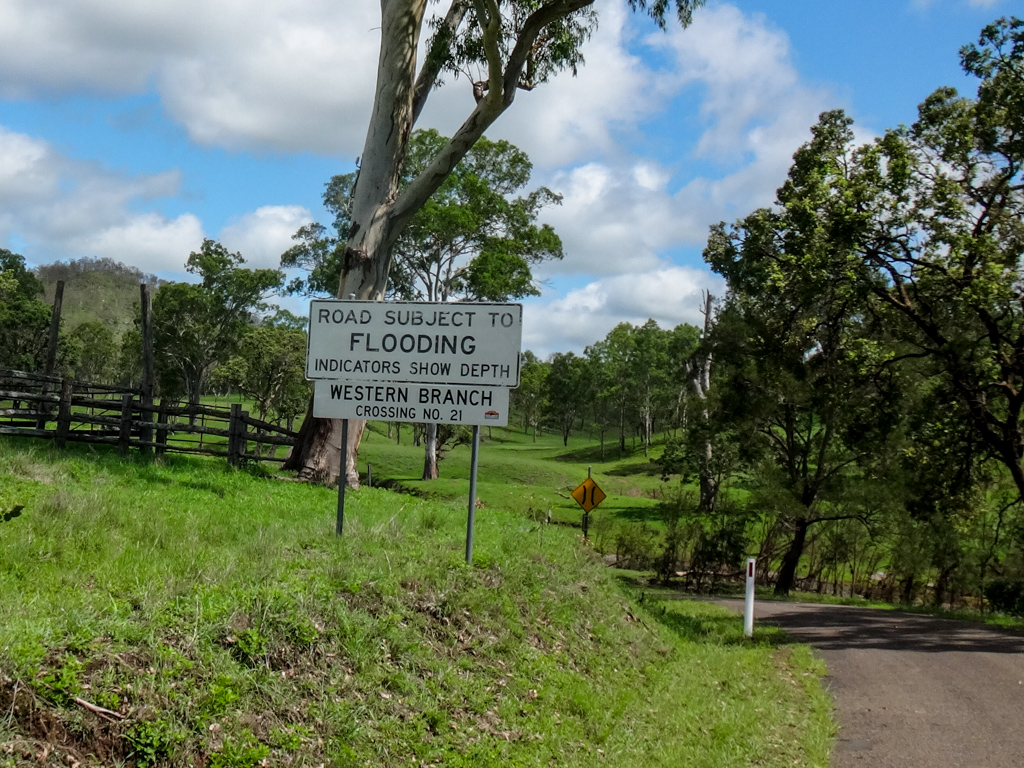 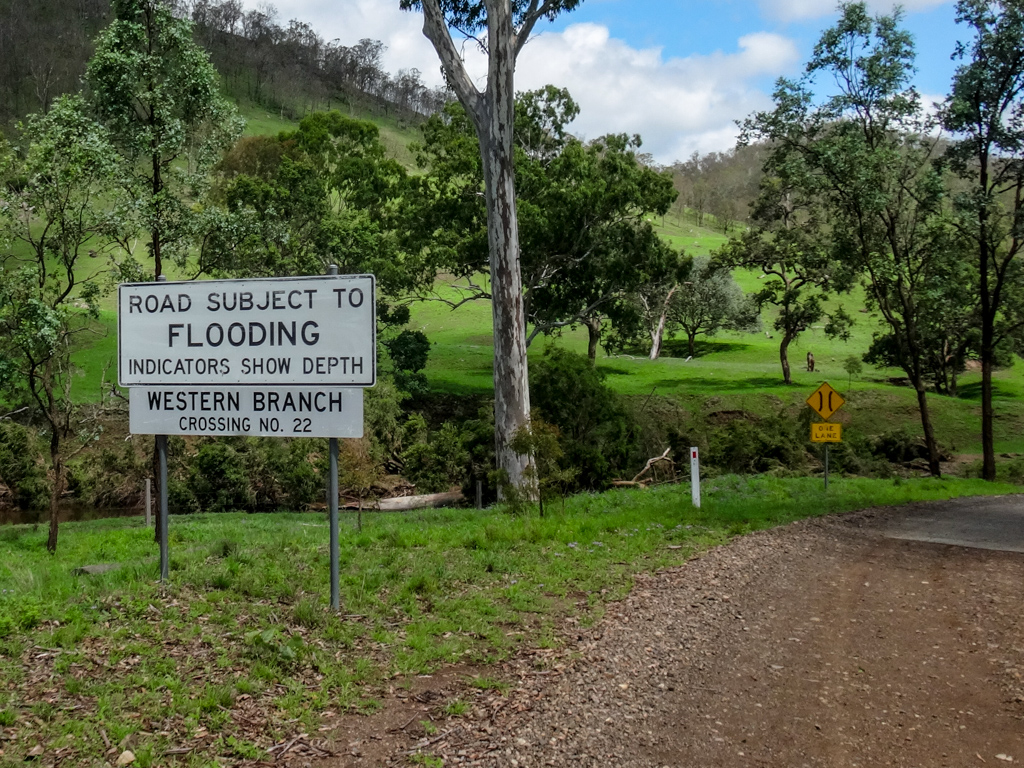 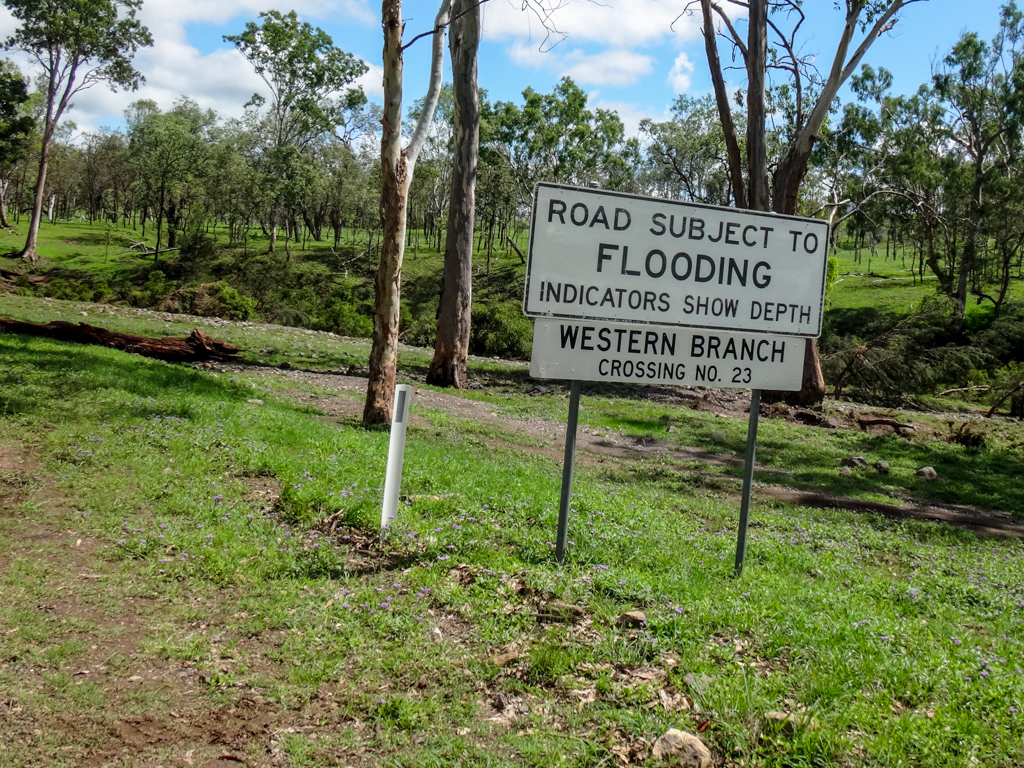 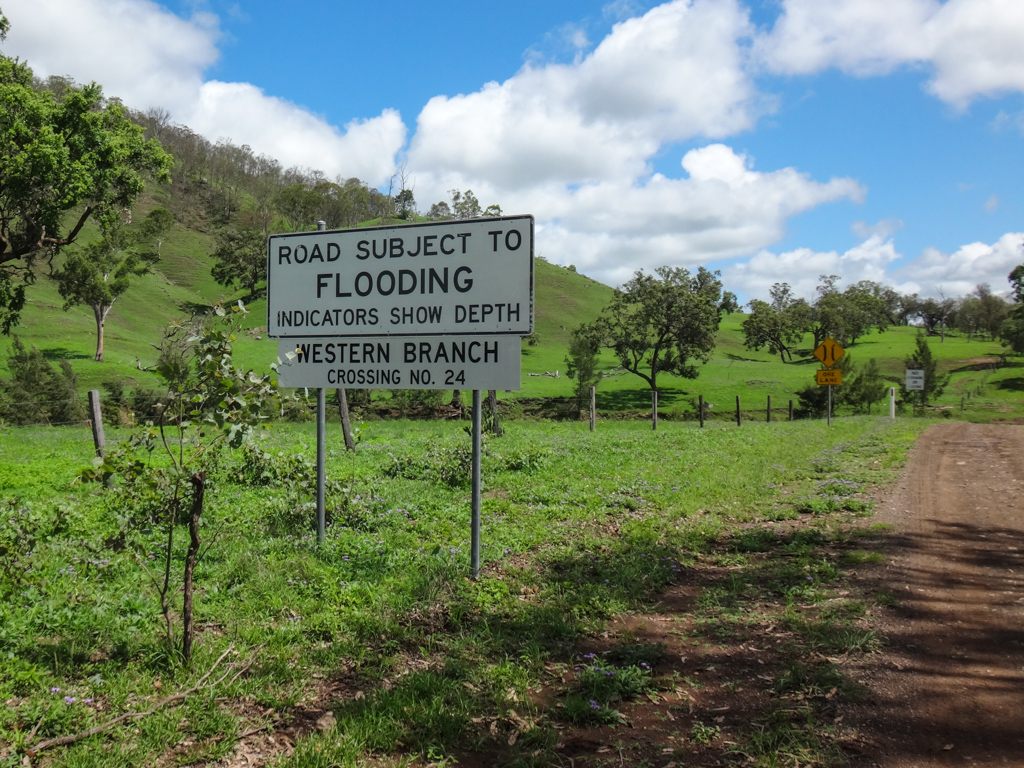 We crossed it twenty-four times on our way up the valley.

At the old forestry station, we turned off Western Branch Road and headed up the hill.

Russel called out to the cattle to calm them down as we rode.

He grew up on a farm and speaks fluent Bovine.  The cattle seemed to understand him, and ran along in front of us as if to show us where to go.

The six kilometre climb to the top was hard work in the humid heat.

It spread us out – some reaching the top faster than others.

I stopped a few times to catch my breath…

…then sighed happily at the top. We emerged at the top of the Eastern Branch Valley, on the other side of the mountains.

On our previous trips here, Wombi Creek had always just been a dry creek bed.  In fact We’ve camped in that creek bed before.

Today it was full of water.

We took a break by the creek to allow everyone to regroup.

The Eastern Branch Valley was like the Western Branch in reverse.  Instead of counting up the number of river crossings, we counted down.

Each crossing was flowing.

My shoes were drenched, but I was enjoying it. 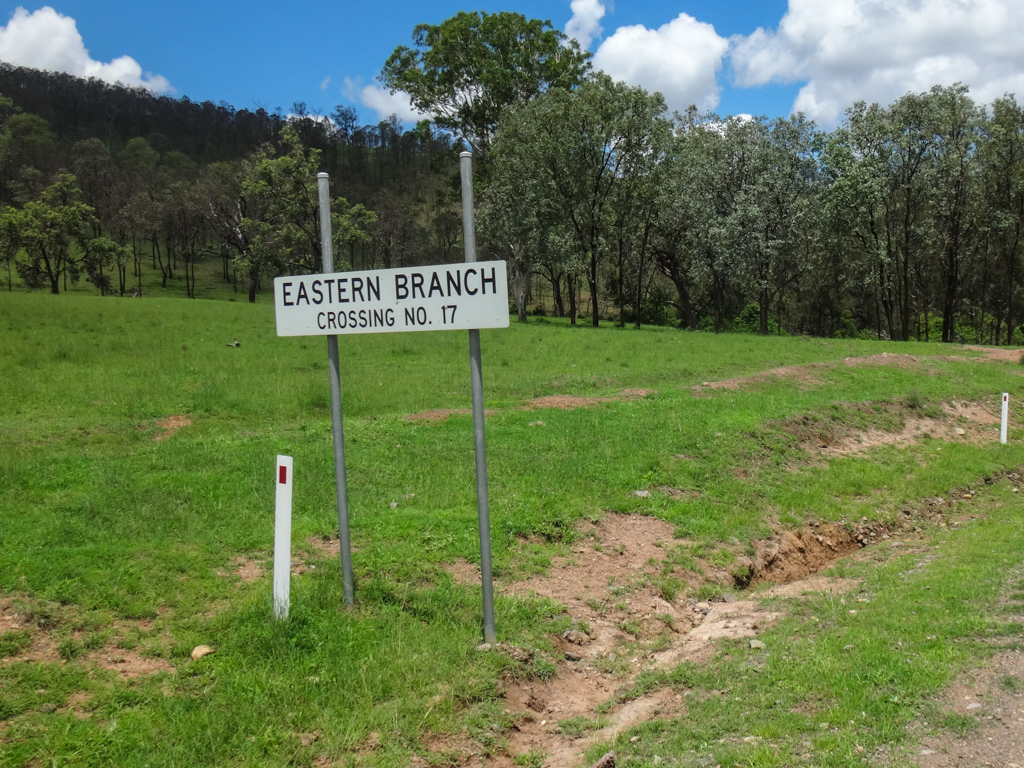 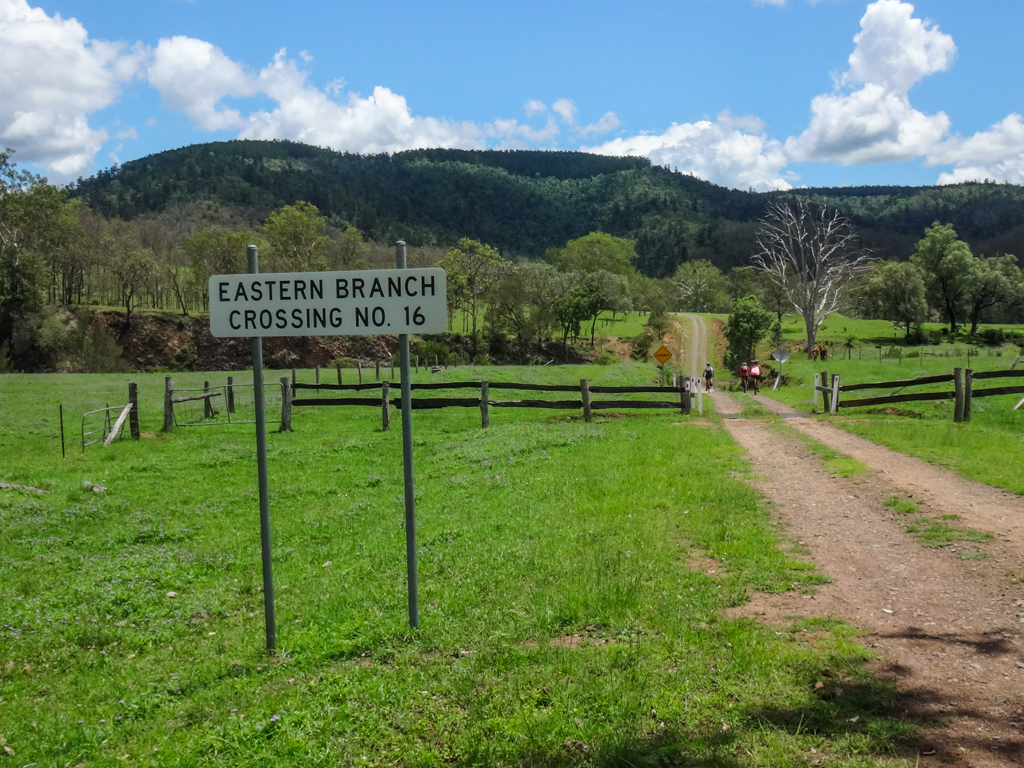 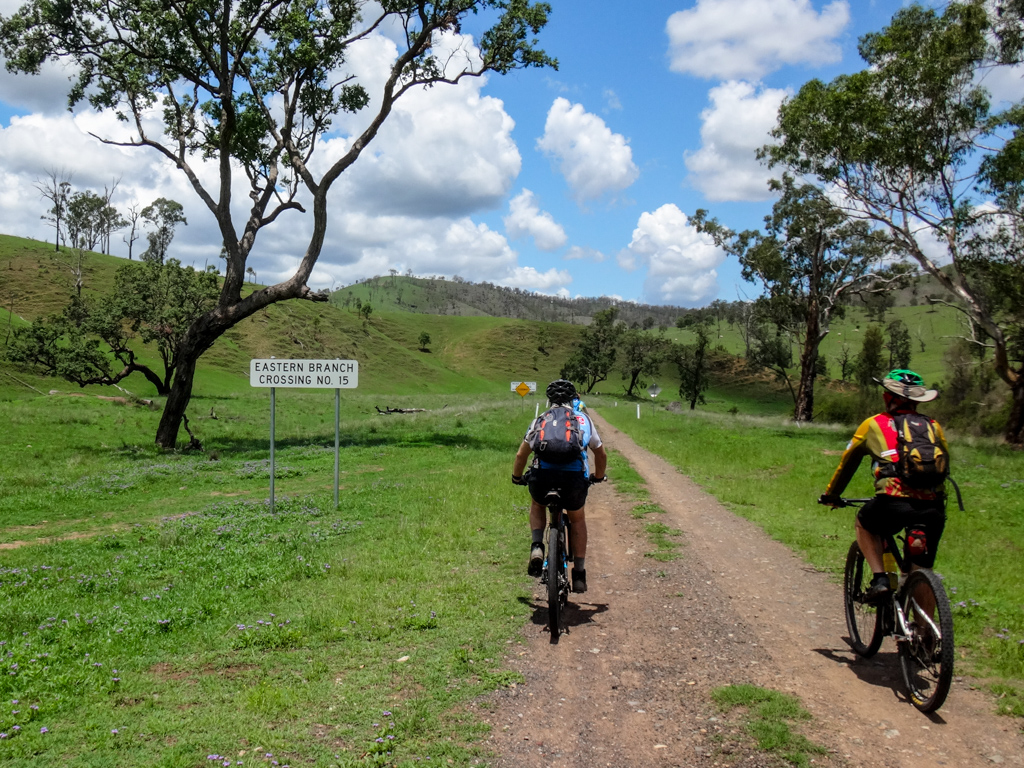 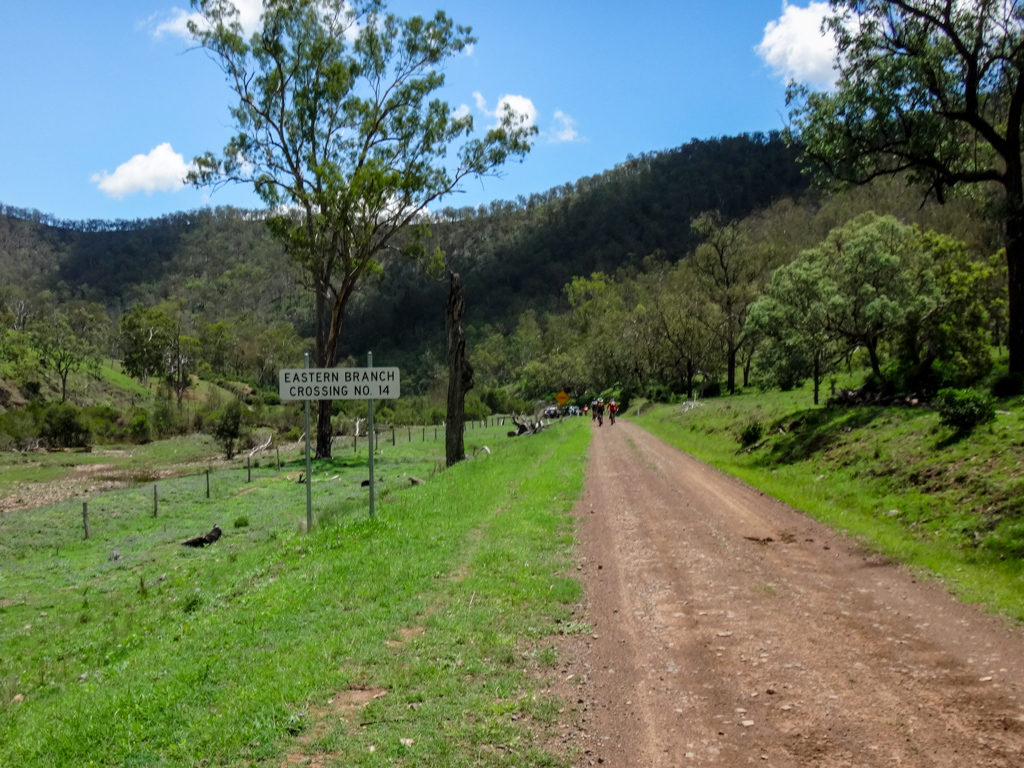 The friendly signs helped us keep track of how many more causeways remained. Over the next few weeks, most of this water will slowly make its way one hundred kilometres downstream to Wivenhoe Dam, supplying water to the city of Brisbane.

Up here it’s wild and fresh, and the worries of the city seem remote.

Before the graziers, loggers harvested timber from the thick forests that once grew here.

At a few different places along the road, the council has erected signs commemorating the old timber-getters.

We stopped for a swim at Crossing 3.

The crossing has an unmistakable huge boulder which the locals have named “Barrow Annie”.

I held my breath, submerged my head and cooled off.

After a quick dry off, we jumped back on the bikes to complete the final two river crossings on the Eastern Branch

Check out the video if you’d like a 30 second sample of what it’s like to ride over a wet causeway on a bike.

We rode about fifty kilometres in just over five hours including breaks.

During that time we climbed about 900 metres in elevation, and I burned about 2,500 kcal.

I’ll rate this one 7.5 out of 10 on the tough-o-meter.  The only tough bit was the hot and humid climb over the hill in the middle.

Thanks Kaye, Calum, Russel, Jason, Peter W, Simon, Adam, and Peter B for a fun day out.