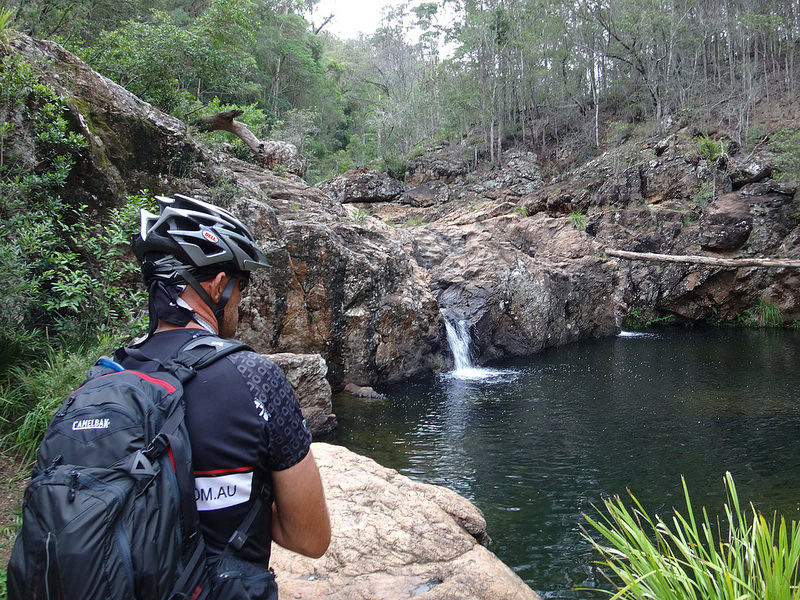 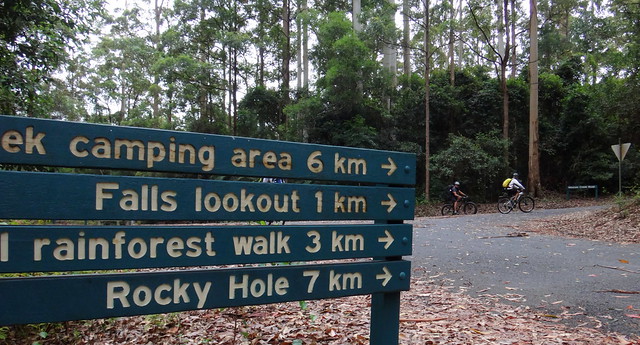 My friend, Paul Brian is a 4WD / 4X4 enthusiast. He is familiar with many secret spots in the bush of South East Queensland and kindly told me about a swimming spot on Neurum Creek called “Rocky Hole” near Mount Mee. (Thanks Paul!)

After a bit of research we decided that it would be worth checking out, especially after all the recent rain. 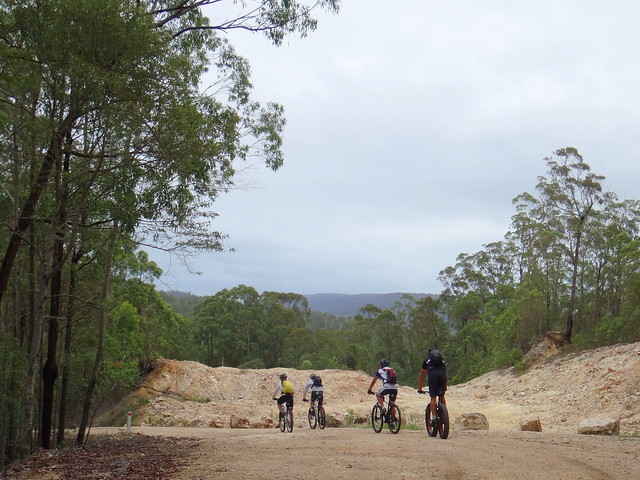 Unusually, we started our ride with a 30 minute descent to Neurum Creek. While this is a nice easy way to start a ride, it ensured that we’d spend the later stages of the ride repaying our debt to gravity, as we climbed back up the hill. 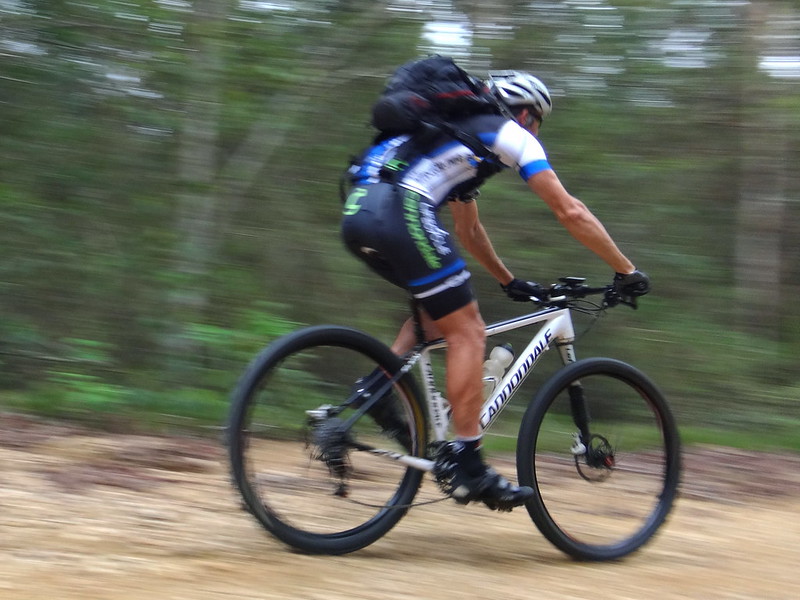 At the bottom of the hill we took a short detour down to Neurum Creek to explore the Camp Ground. 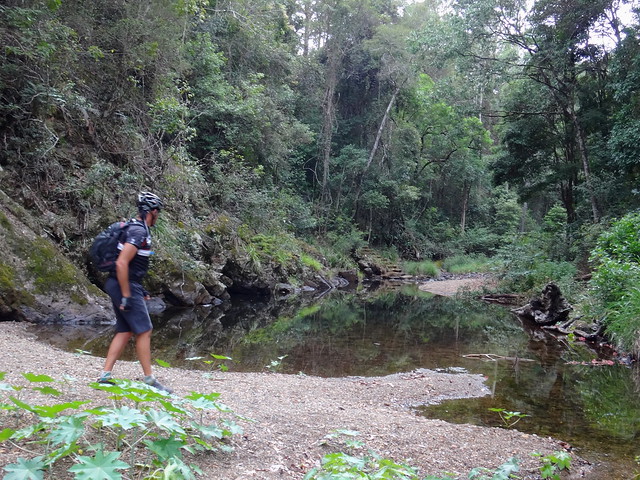 Neurum Creek Camp Ground is right on the banks of the creek. We had the place to ourselves except for one solitary camper who seemed surprised to see 5 eager mountain bikers rolling around the camp ground. 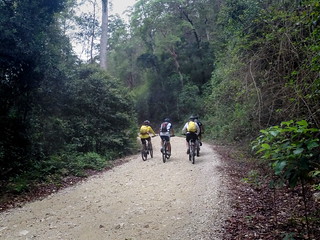 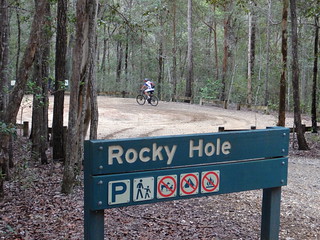 From there we climbed back up to the main track and made our way downstream to Rocky Hole.

What a beautiful spot! 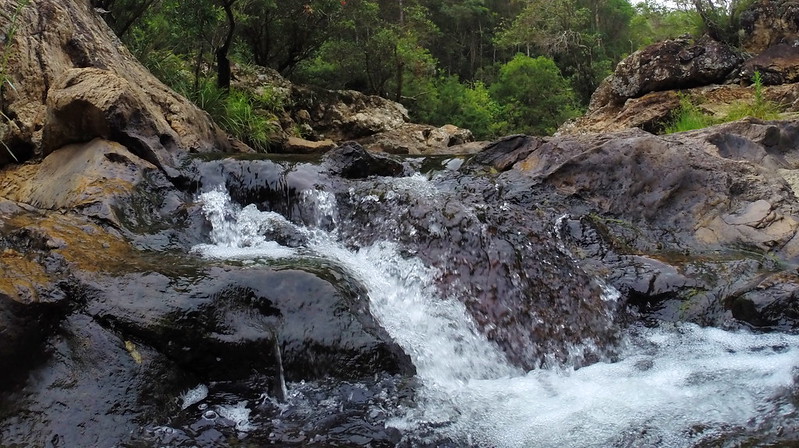 Clear water bubbled over boulders into a deep pool. 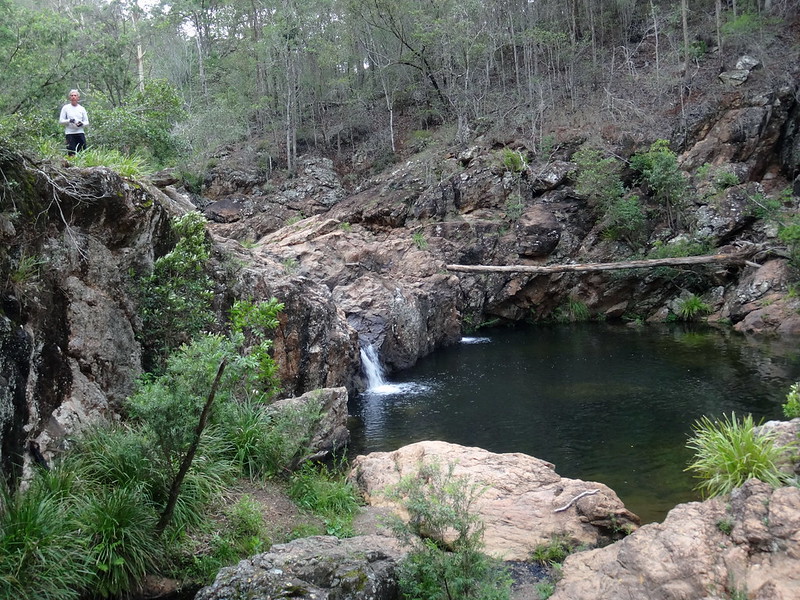 I made a mental note to bring my family back here on a hot day. 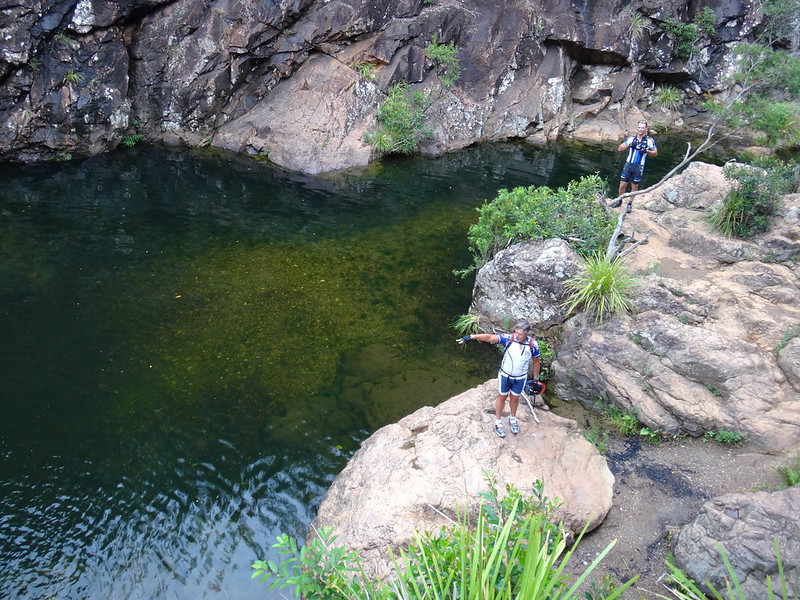 I feel so fortunate to be able to explore such magical places as this, so easily accessible from my front door.

It wasn’t always so…

In 1851, young (20-year-old) Tom Petrie accompanied an ambitious prospector to Neurum Creek to help him look for gold.

It was a three-day journey from Brisbane, with two overnight stops at Upper Caboolture then Durrundur (near present day Woodford), before Tom, who was fluent in the local aboriginal language, persuaded some local aborigines to show him a shortcut over the range from Durrundur to Neurum Creek.

When morning came they started off, with the natives leading, and travelled several miles without interruption. Then climbing up the spur of a mountain, and going down the other side, they came into a very thick scrub, where about one hundred blacks were hunting for paddymelons, making a great row. The two blacks who were with the white men sang out to the others, who immediately clustered round and asked questions. Some of the young fellows grew very bold, and the merchant suggested to Father to get the gun ready, for by this time he was very much afraid; but the, boy said to leave it to him, it would be all right, and he commenced to talk to and chaff them in their own tongue. Soon they were all laughing, and made no objection when the party started to push on, which they did with a will, reaching their destination that night, and camping there on the bank of a creek.

The prospector was a nervous man who grew overly anxious about the presence of so many aborigines and finally decided to abandon the expedition; and got Tom to take him home via Mount Brisbane.

In those days my father could find his way anywhere through the bush to where he wished to go, so long as the sun was shining, and he knew in what direction the place lay, or if he had been once before. One could never lose him in the bush, but, of course, over the mountains the blacks had tracks cut, and it saved time to be shown these. 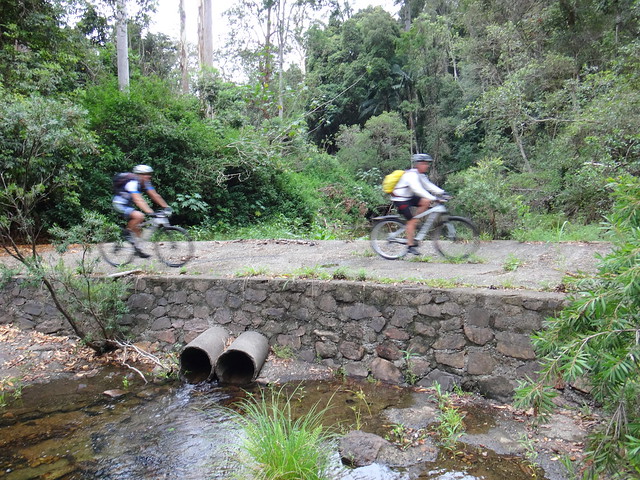 What fascinates me about these stories from over 150 years ago is that they involve places that my friends and I visit today.

Many of the dirt tracks and trails we follow were probably blazed by indigenous travellers over thousands of years.

For now, portions of the ancient forests remain, and I’m privileged to experience them. 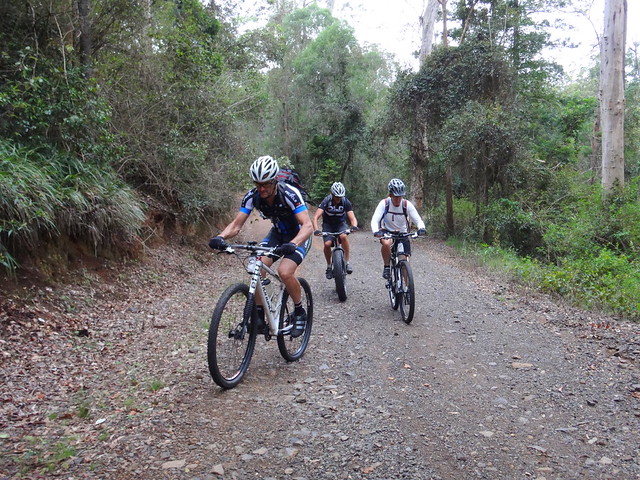 Shortly after leaving the Rocky Hole we started repaying our gravity debt as we slowly climbed out of the valley. 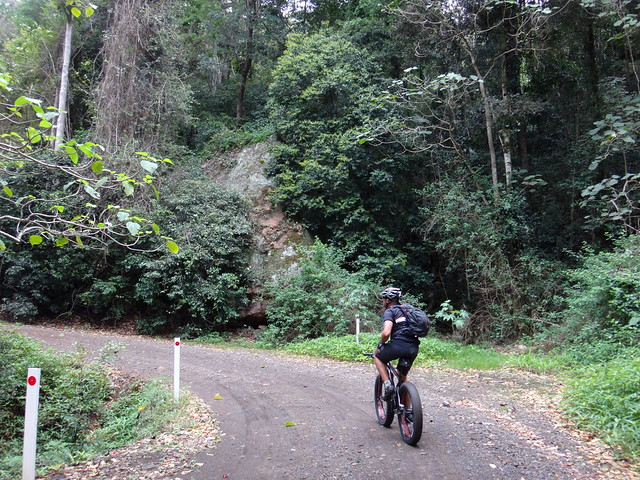 The dirt road snaked up the range under towering Gympie Gypmie (Stinging) trees. The leaves of these poisonous trees cause intense burning pain if you touch them.

We decided to leave them alone and keep climbing. 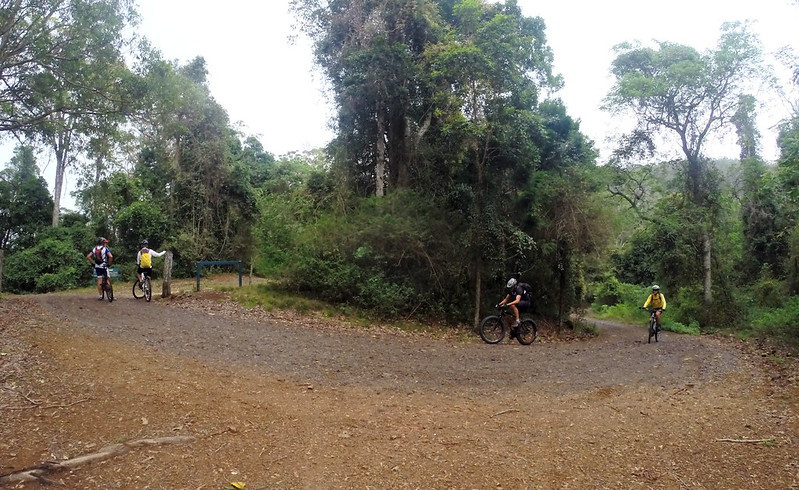 Eventually we reached Lovedays Road which follows the main ridge line along the top of the range. Sadly this was less than half of the 10km climb back to our starting point. The hill still had a long way to go. 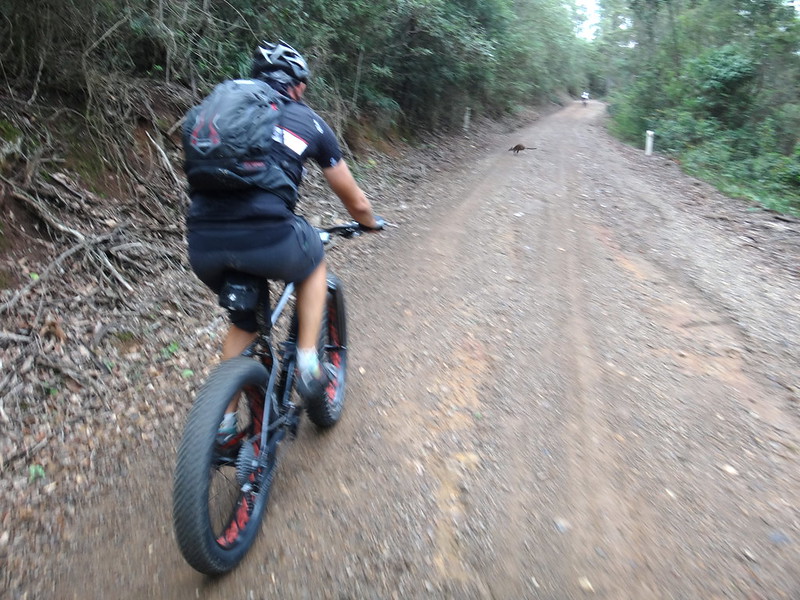 A timid Paddymelon (a small wallaby) darted across the road in front of us.

A hundred and fifty years ago, Tom Petrie’s aboriginal friends might have had him for lunch.

Today, all he had to worry about were the huge tyres on Paul’s fat bike. 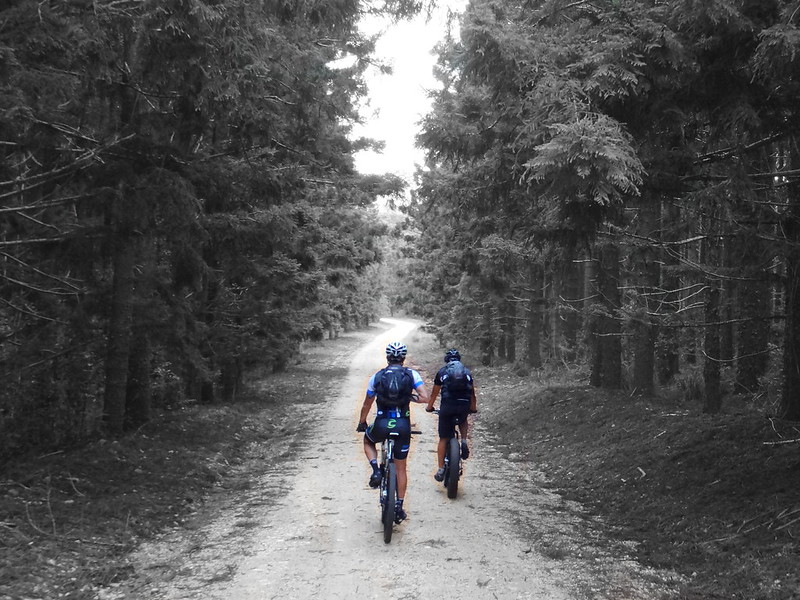 All hills come to an end, and we eventually relaxed as the bikes rolled through the Hoop Pine forests at the top of the range. 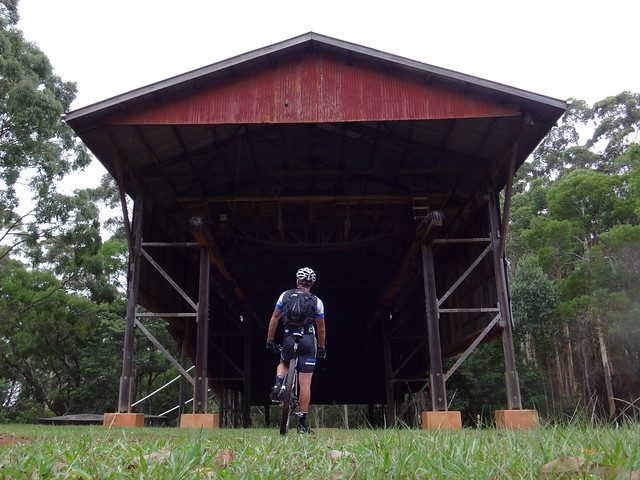 We arrived back at the Gantry after about 3 hours of riding.

Travelling only 24 kilometres, we had climbed about 850 metres, and I burned just under 1,400 kcal.

We had kept this ride much shorter than usual because we were unsure of the weather conditions, and we all felt like taking it easy in keeping with the laid-back time of year.

I’ll rate this ride 6.5 out of 10 on the tough-o-meter. It would be a great spot to bring a larger group back for a social ride.

Thanks Eric, Paul, Jason and Mike for another great ride!