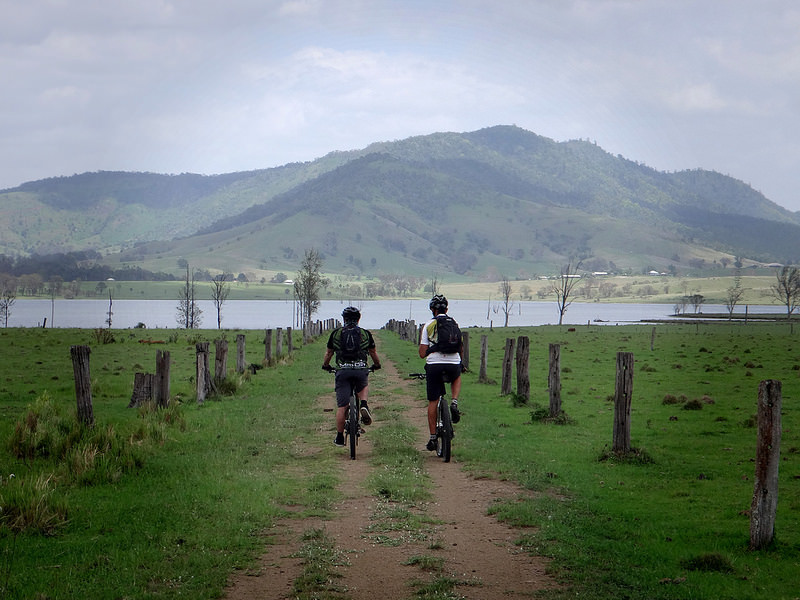 Today’s adventure took Darb, Paul and me over the mountains to Westvale – a small farming community nestled between Somerset Dam and the D’Aguilar Range. 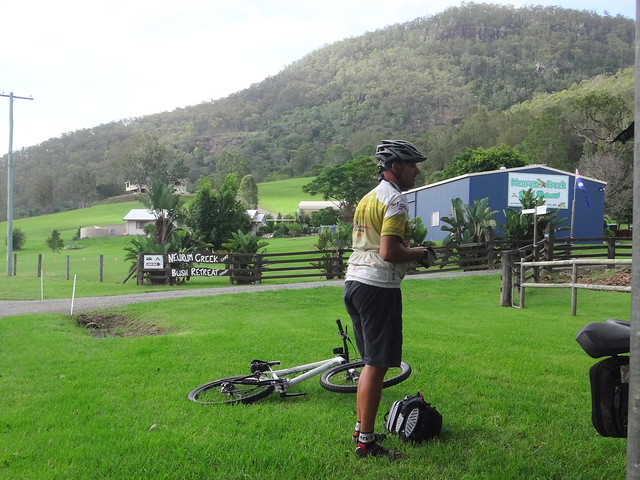 We parked the car at Neurum Creek Bush Retreat, near Woodford, before slowly making our way up the hill into the National Park. 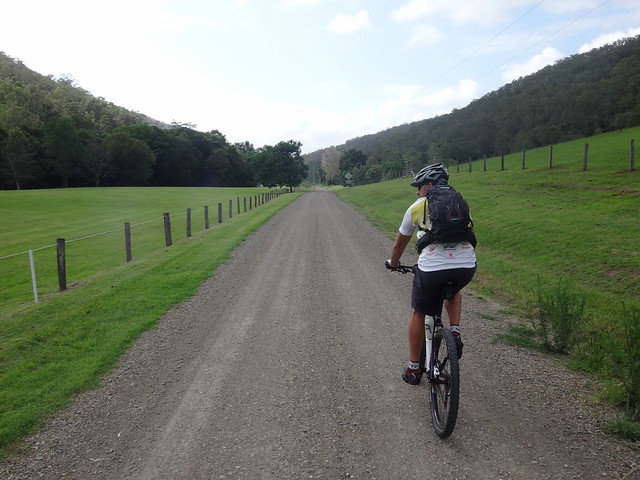 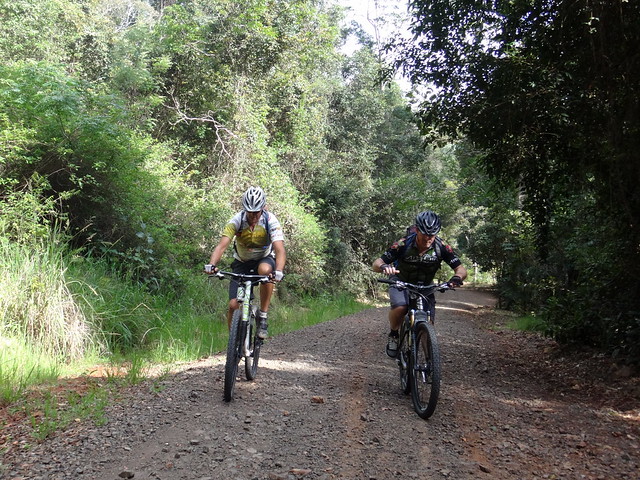 … but slowly grew steeper as we pushed up the hill. 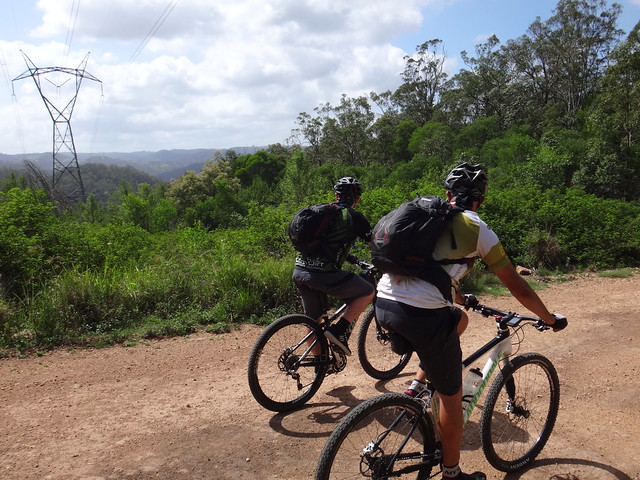 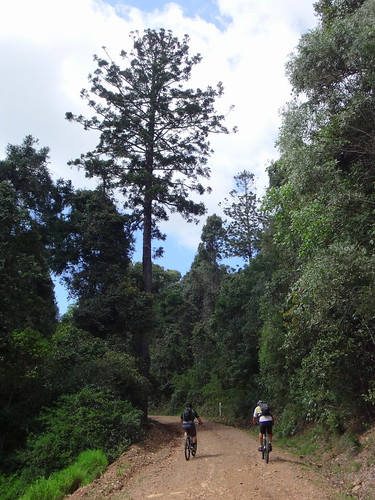 It took us an hour of hard work to reach the top, where we enjoyed a brief respite in the cool breeze before dropping down the other side. 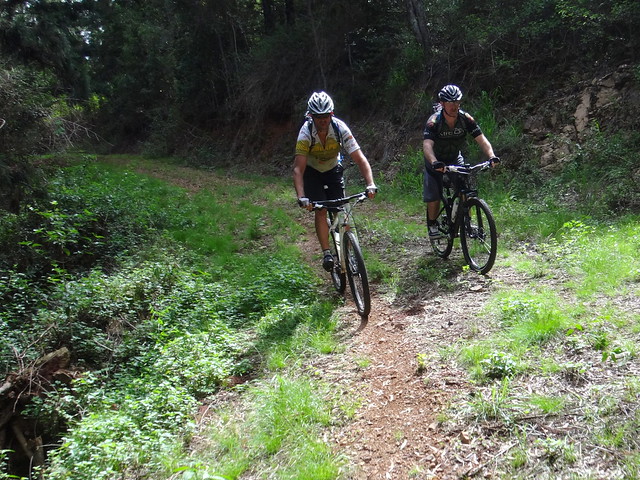 We pointed the bikes westwards towards Lake Somerset and followed the steep trail down through rugged plantation forests. The lonely track had rarely seen any activity except for an occasional forestry worker, so we took it easy as we rolled over the loose gravel. 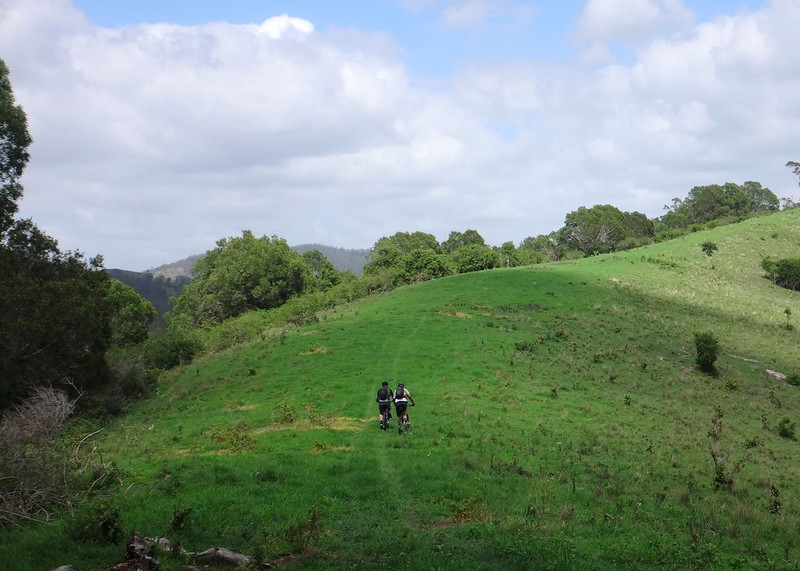 We emerged from the forest to open rolling green hills, and followed faint tyre tracks through the lush grass. 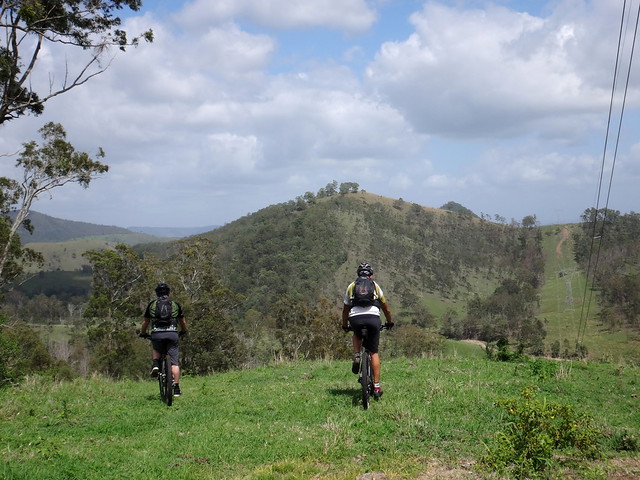 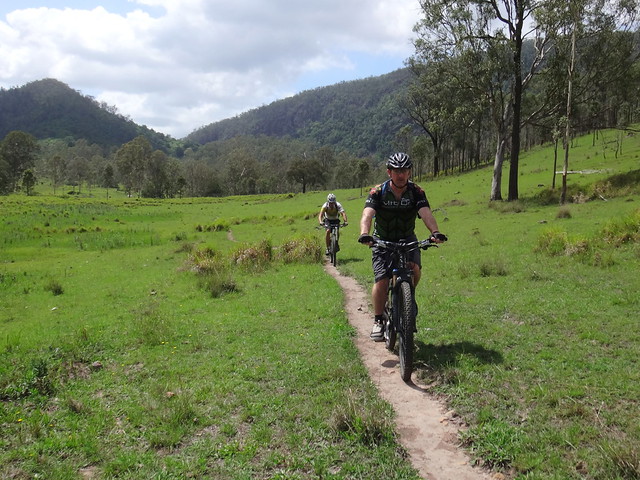 Tyre tracks gave way to bovine single tracks as they snaked through paddocks towards the creek. Cattle unerringly pick the easiest way over rough terrain. Over the years their hooves wear smooth trails as they repeatedly follow the same path. Those smooth trails are perfect for riding on a bike – provided you remember to dodge the cow pats! 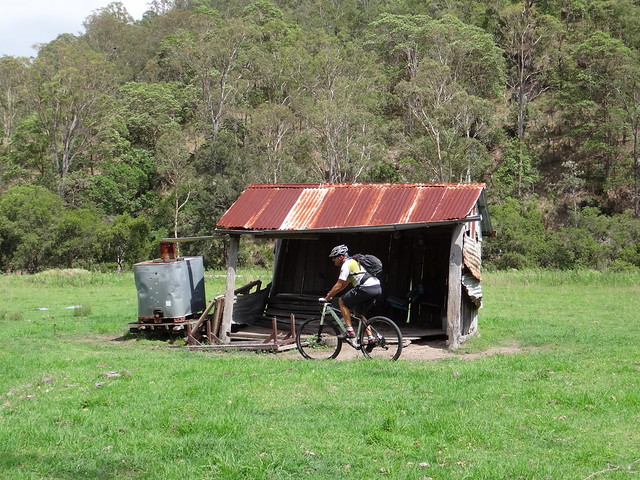 We decided against staying the night at the “Westvale Hilton”. 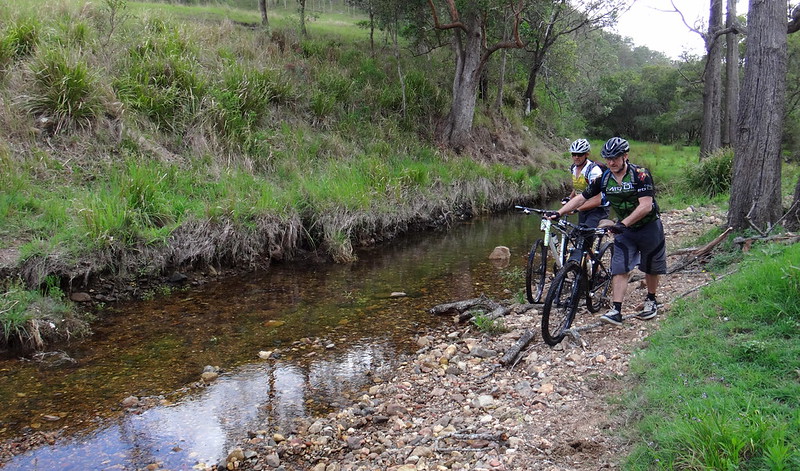 After following cattle tracks for about a kilometre we reached Oaky Creek, flowing with clear fresh water after recent rain.

We crossed the creek many times as we followed an old road reserve towards the lake.

Darb showed us a novel way to keep his feet dry. 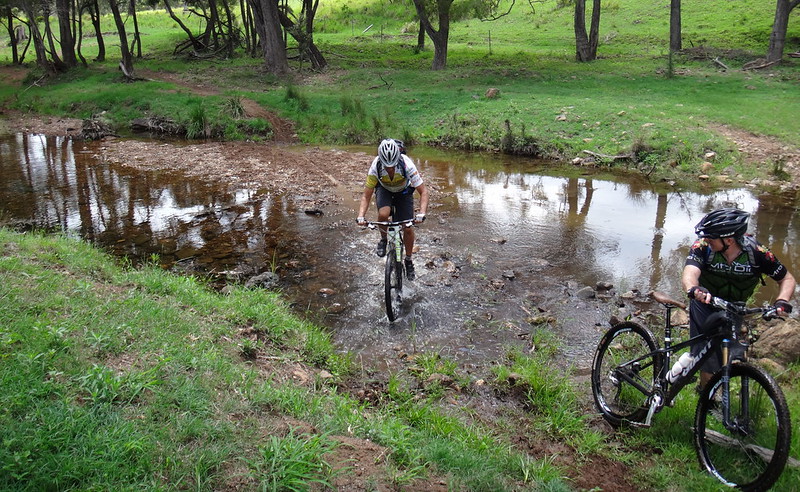 Not to be outdone, Paul showed us an even better way. 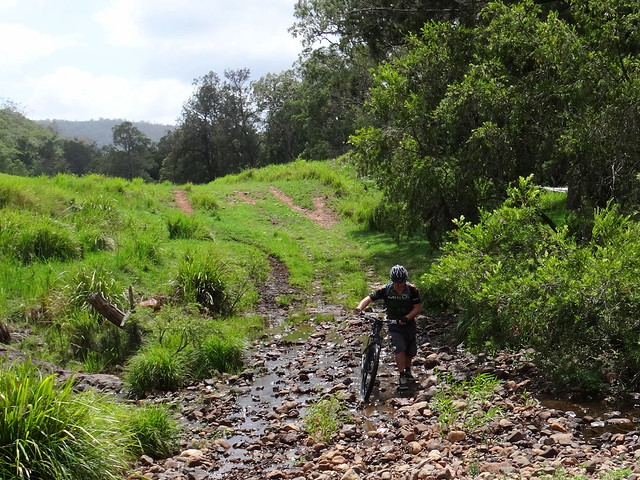 Some of the “rock grdens” were too rough and we just pushed the bikes over the rough boulders. 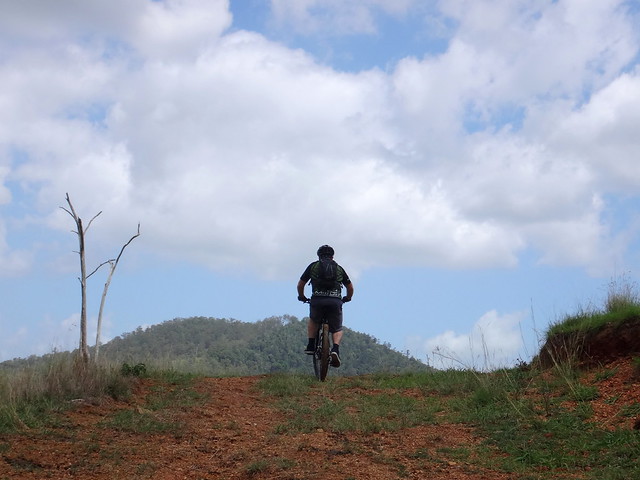 I was amazed at how tough modern mountain bikes are. We push them quite hard over rugged terrain, and they never let us down. 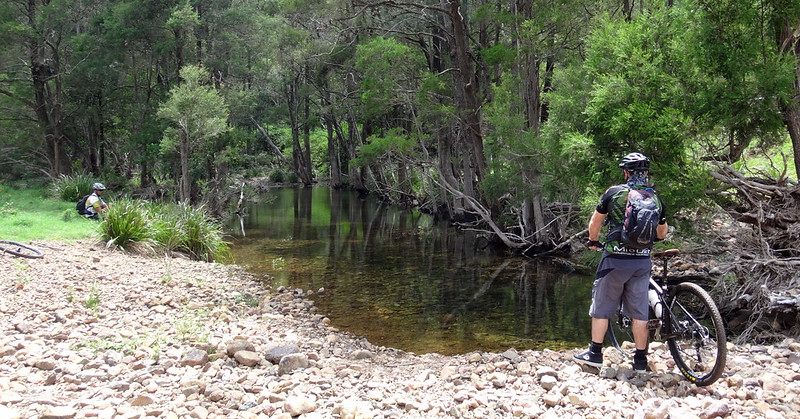 We stopped for a short break and a bite to eat on the banks of the creek. 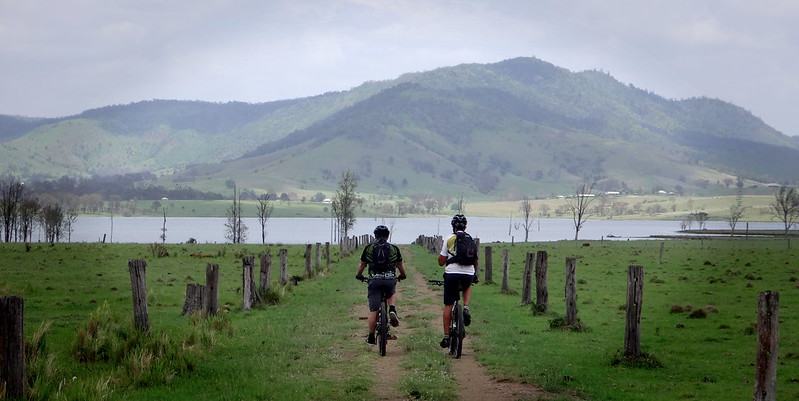 We reached the shoreline of Lake Somerset around lunch time – what a perfect spot for lunch.

Somerset Dam was built over a twenty year period between about 1930 and 1950. Before the dam, the Stanley River flowed through this valley towards its junction with the Brisbane River about twenty kilometres downstream. 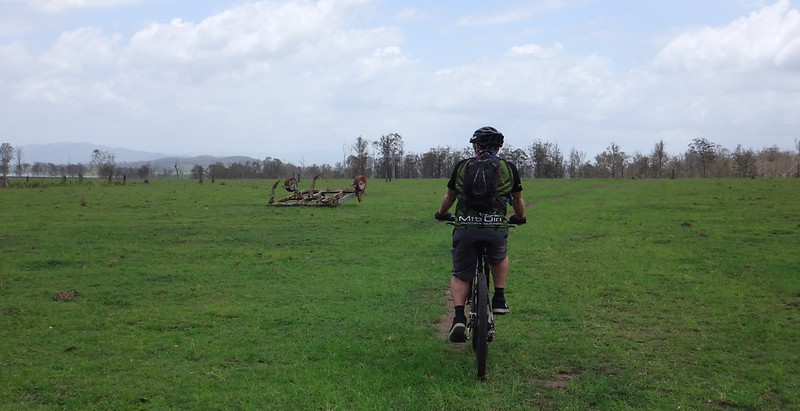 Not far from the busy town of Kilcoy, “Westvale” was a thriving timber and cattle district established on the banks of the Stanley River between 1887 and 1910. It had its own school and village.

The indigenous owners of the area are the Jinibara Aboriginal People. One of the most famous Jinibara men was Gaiarbau (also known as “Willie Mackenzie”) of the Darwabada clan. His intimate knowledge of the customs, language and stories of the Jinibara people was recorded in the 1950’s by Dr L.P. Winterbotham – an anthropologist from the University of Queensland. This information proved critical in the native title court case which recognized the claim of the Jinibara people to the surrounding country. 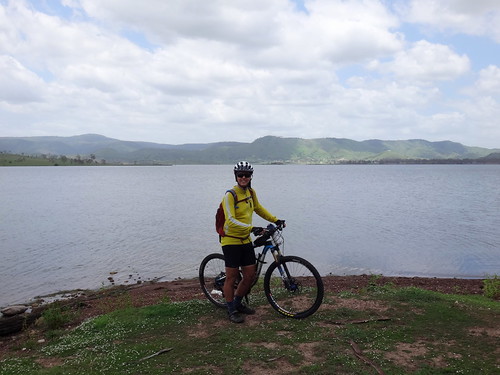 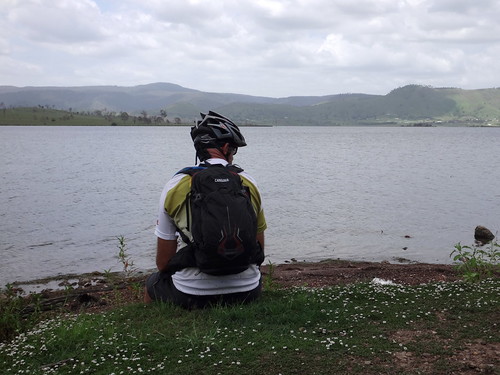 A cool breeze wafted over the water as we relaxed on the shoreline. We could hear the distant hum of speed boats and mused smugly about the difference in fuel consumption rates between outboard motors and mountain bikes 🙂 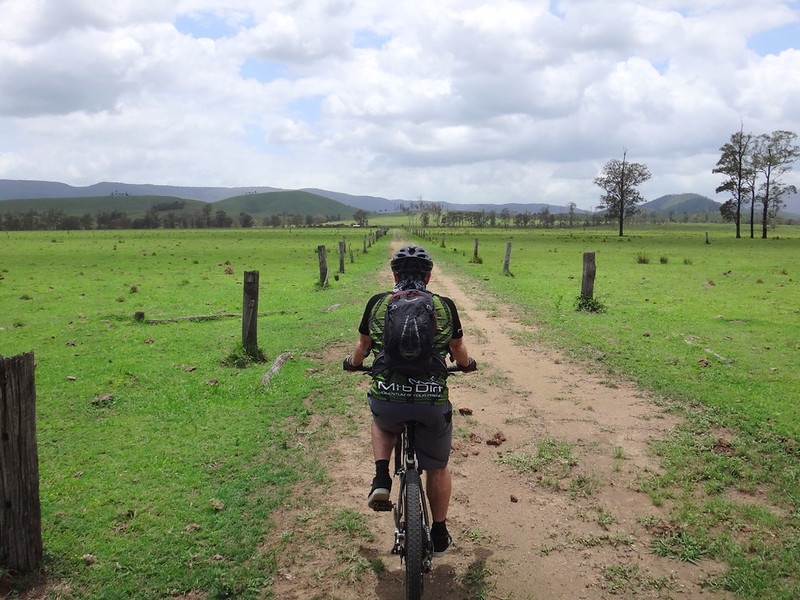 The final leg of our ride followed the shoreline of the lake back towards Neurum Creek. 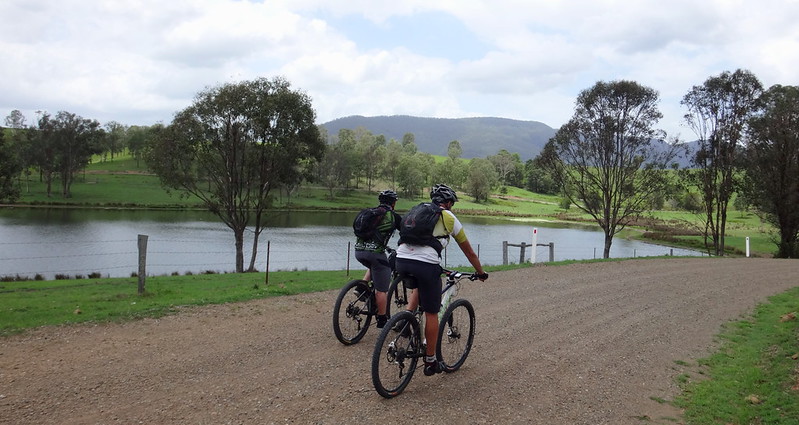 Around here the lake seems to poke long fingers into the land, forcing the dirt road to meander as it follows the shore. 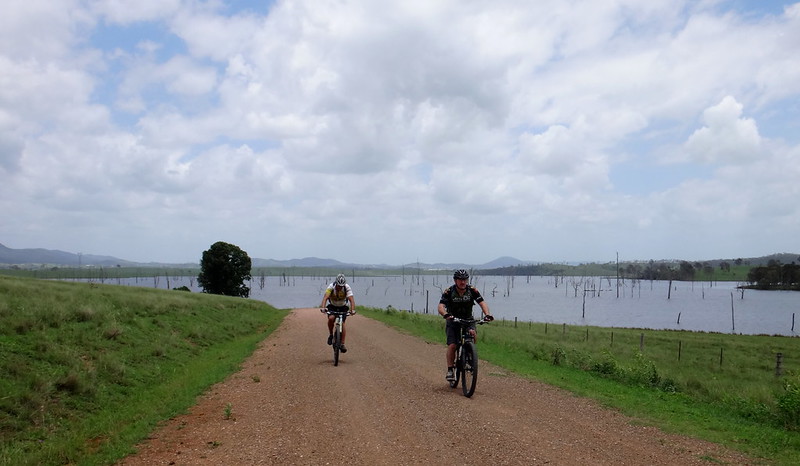 Although the terrain was relatively flat, we still had to contend with a stiff headwind as we rode eastwards. 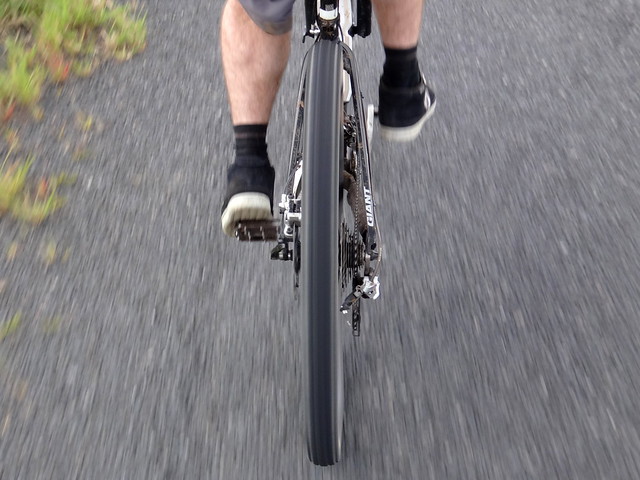 When we hit the paved road, I followed Darb’s rear wheel closely to avoid the headwind. Drafting behind a stronger rider is a great help when battling the wind – provided the draftee doesn’t mind 🙂 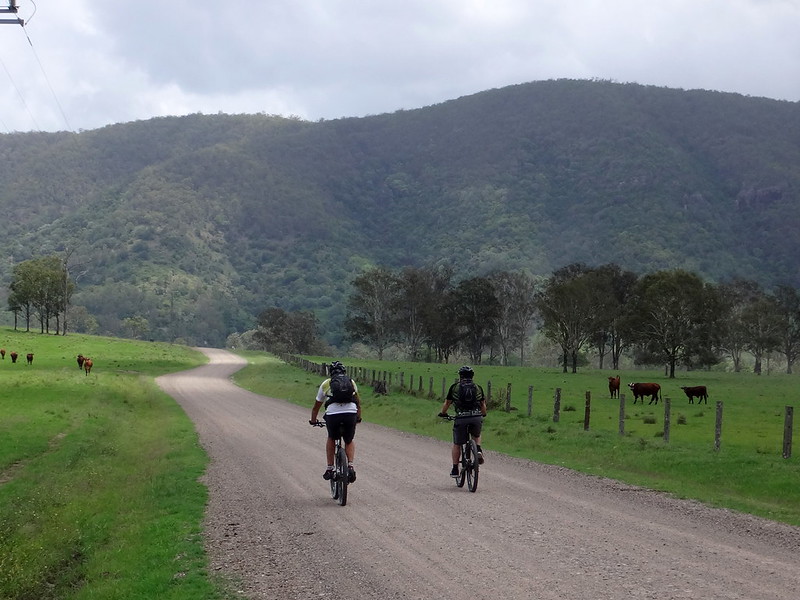 We rolled back into Neurum Creek Bush Retreat after about five hours of riding, including breaks.

We had ridden about 50 kilometres with almost 900 metres of vertical ascent.

This was a relatively easy and pleasant ride despite the warm weather. There was only one large climb at the start. The major challenge was navigational – if you plan to head westwards from the D’Aguilar Range a GPS is essential because of the complex and potentially confusing network of trails and tracks. 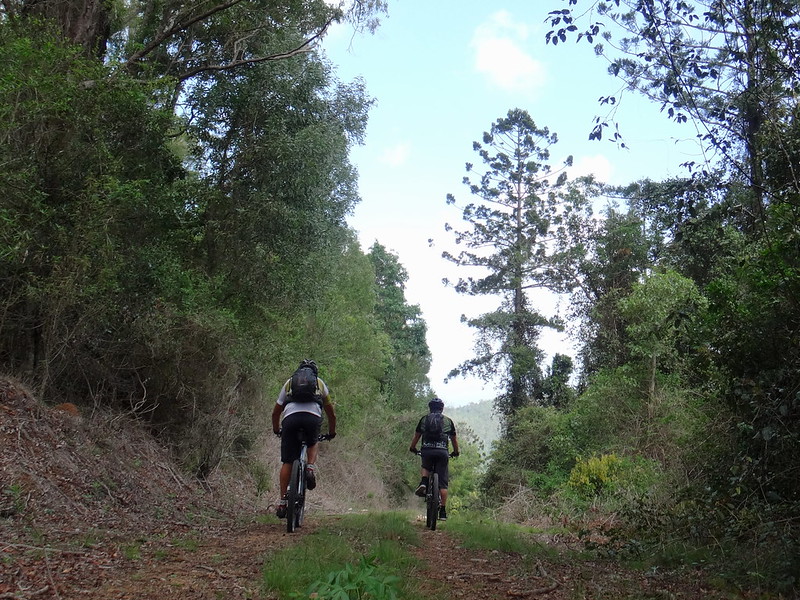 Thanks Darb and Paul for another great ride!