Finally able to ride again after two months of recovery, I decided that today I would make up for lost time. We weren’t quite sure where we could end up – the idea was to keep on riding as long as it was enjoyable… which is very open-ended. 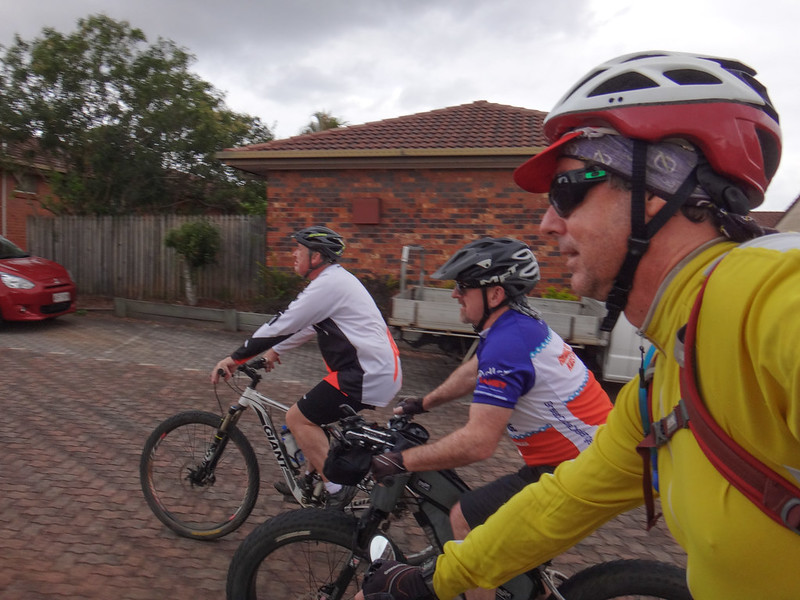 Although I could ride, my surgeon advised me to avoid rough surfaces for now. His primary rule for me was “Don’t fall off”.

So the challenge was to find a nice long course that was safe, reasonably smooth and fun. 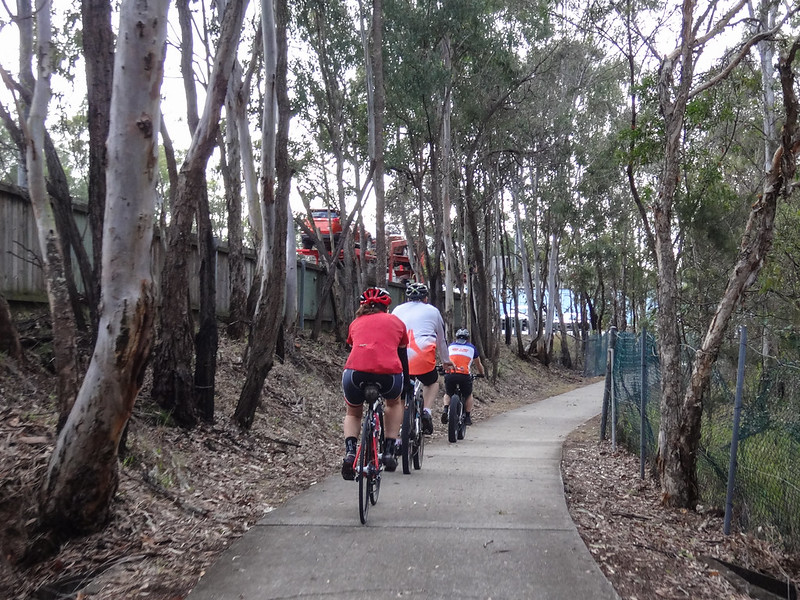 We started the day following the wonderful network of bike paths south-east towards the Boondall wetlands. 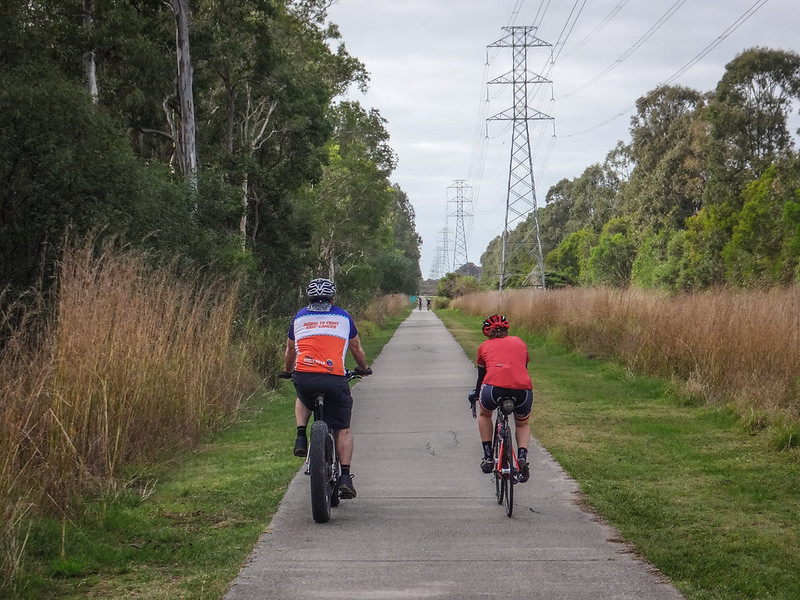 Our group looked quite odd. You don’t normally see mountain bikes, a fat bike and a road bike all riding together. 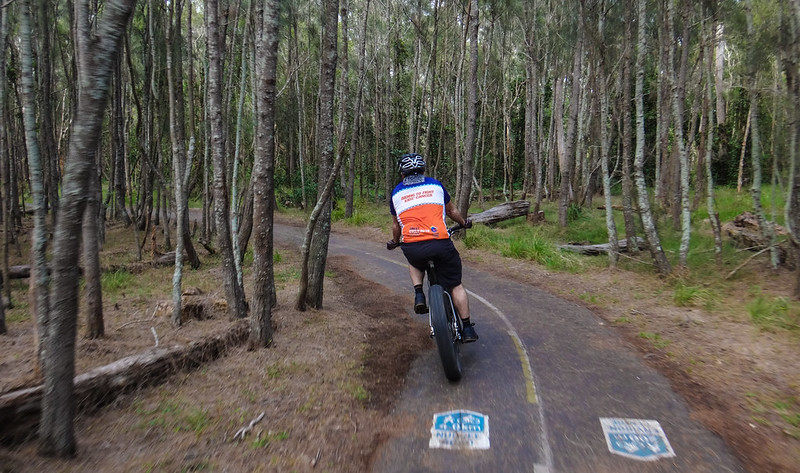 As I listened to Darb’s howling tyres in front of me, I realized it didn’t really matter where we were going; I was just happy to be riding again. 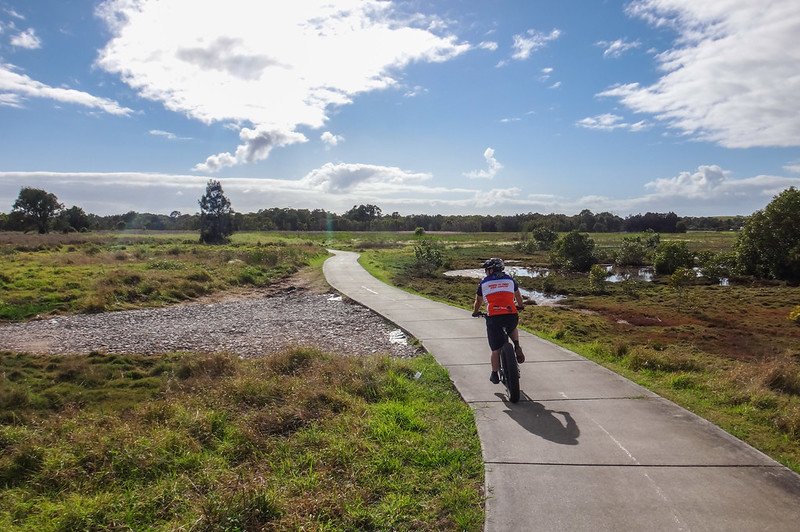 The paved bike paths were tame compared to some of our rides, but the diverse scenery was interesting. 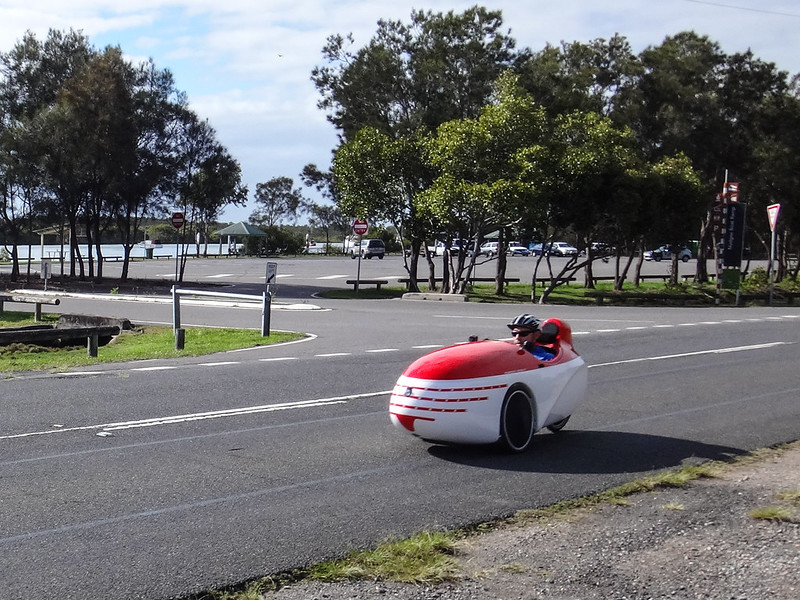 Some of the bikes out there today were even stranger than Darb’s fat bike.  This recumbent bicycle looked amazing as it flew along Nudgee Road, oblivious to wind resistance. 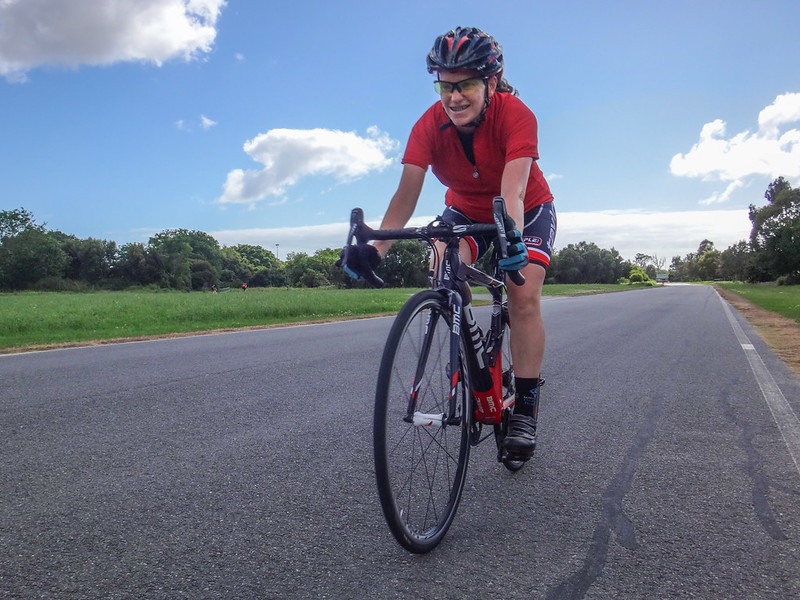 We stopped for a quick snack at the Nundah Crit Track.  Having the speedy bike, Becca couldn’t resist going for a blast around the track while the rest of us mortals relaxed. 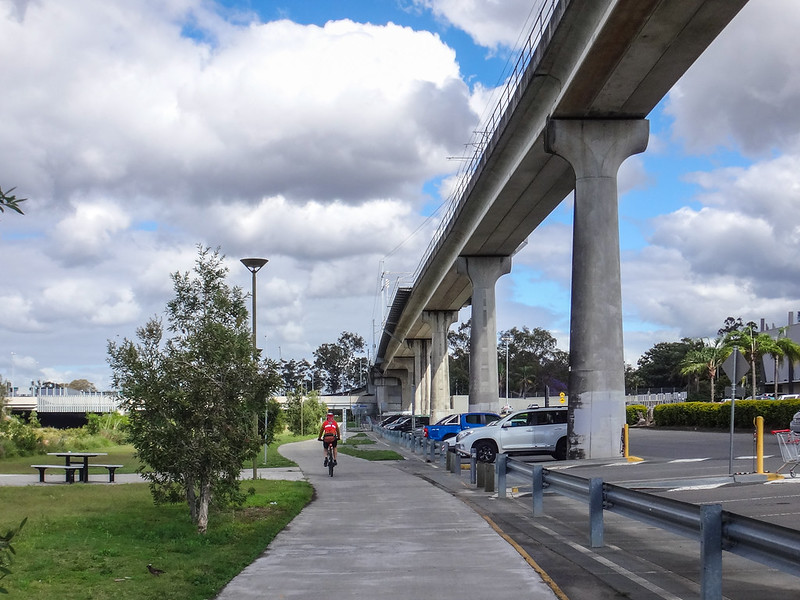 The overhead railway track at Toombul reminded us that we were getting closer to the city. 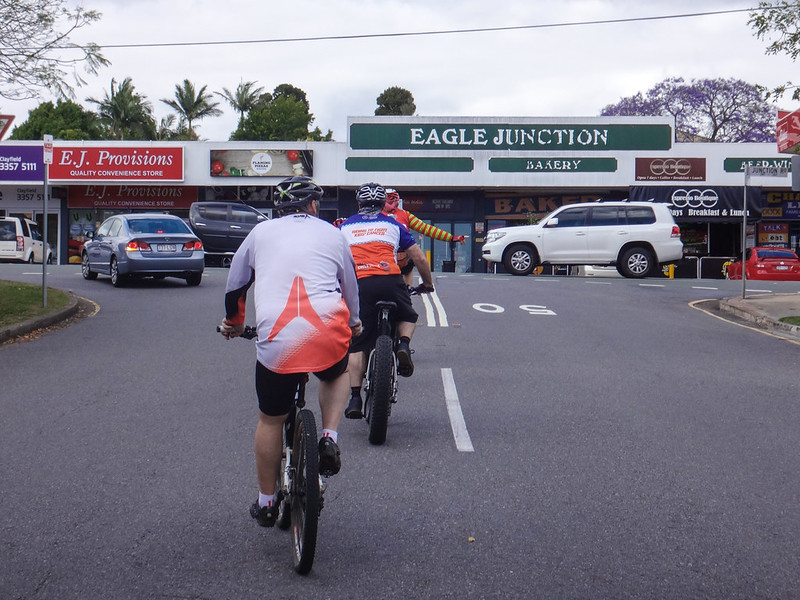 Eventually we had to leave the safety of bike paths to ride through the suburbs at Eagle Junction.  Russel rides this way to work several times per week, so we just lined up behind him and played “follow the leader”. 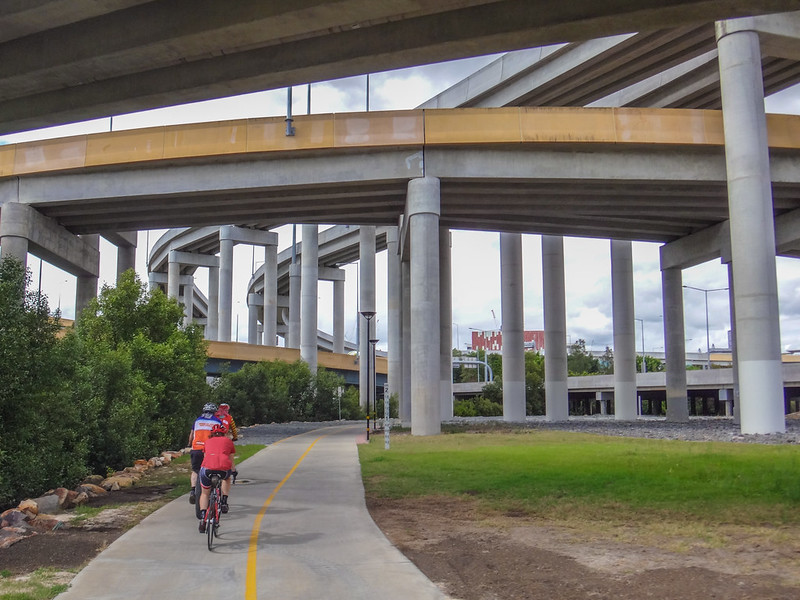 Although I’ve driven over the vehicle fly overs near the Royal Brisbane Hospital, this was the first time I’d ridden under them.  The towering pylons and suspended roadways cut an imposing image overhead as they blocked the sky. 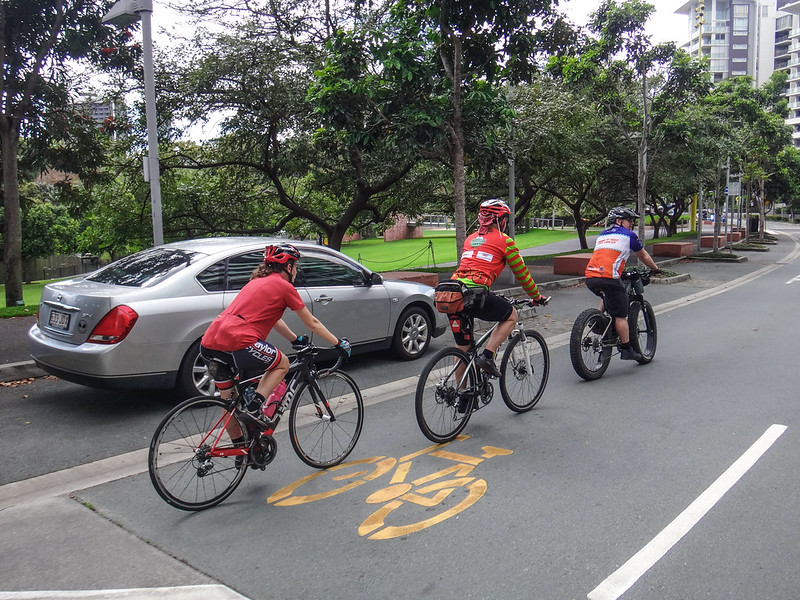 After a couple more kilometres we rolled into the Roma Street Parklands.  We took a quick vote, and since we weren’t in a hurry, we decided it was time for another break. 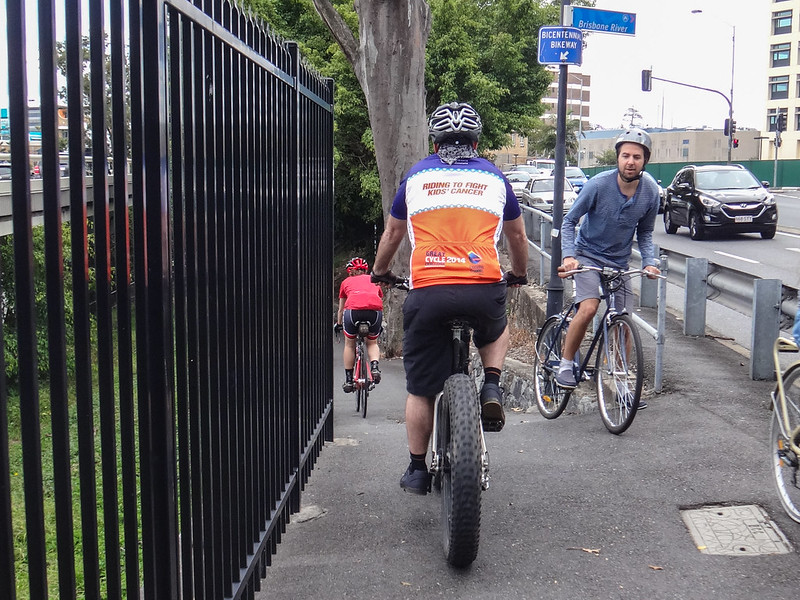 I enjoyed watching people’s faces as we rode through the city.

I could almost hear them thinking “What’s that thing doing in here?”

I reckon Darb is used to it.  But it’s still fun to watch. 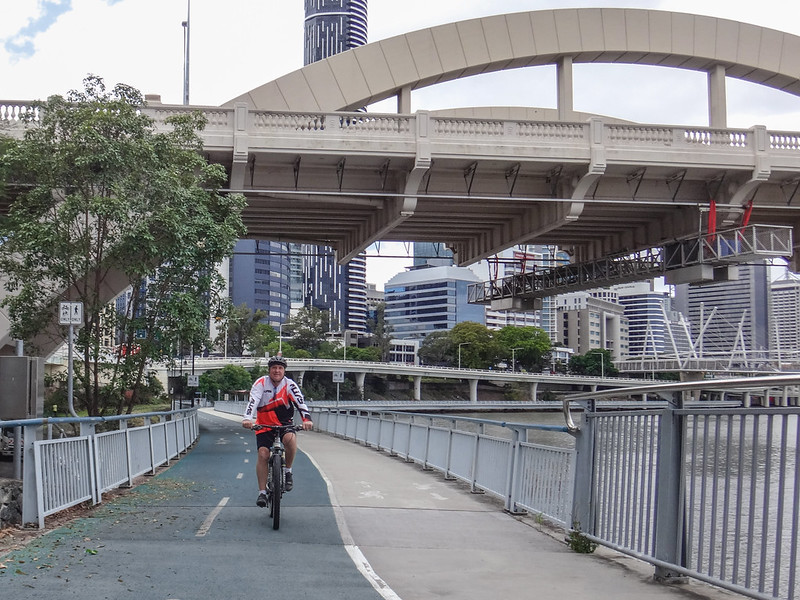 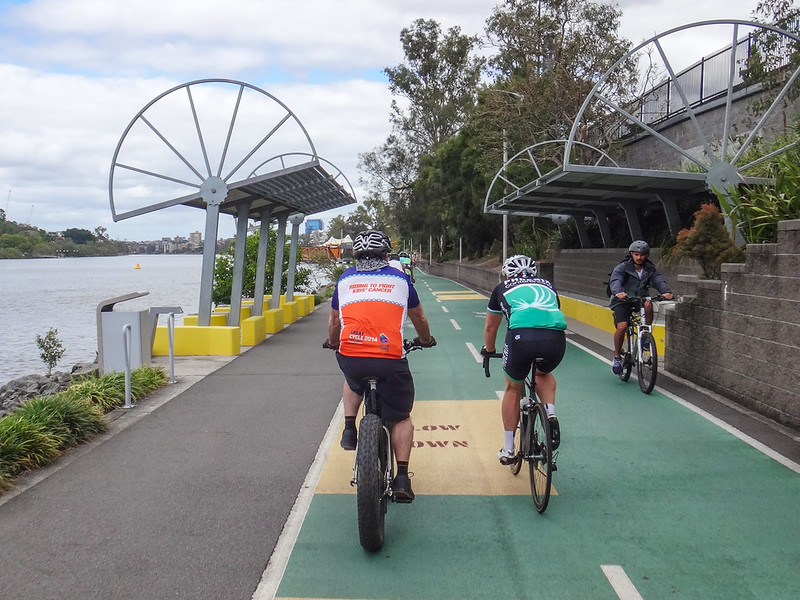 We dropped down onto the Coronation Drive Bikeway and enjoyed a brief pedal by the river.  This pleasant stretch was buzzing with joggers, road bikes, mountain bikes heading off to the bush somewhere, and walkers enjoying the view. 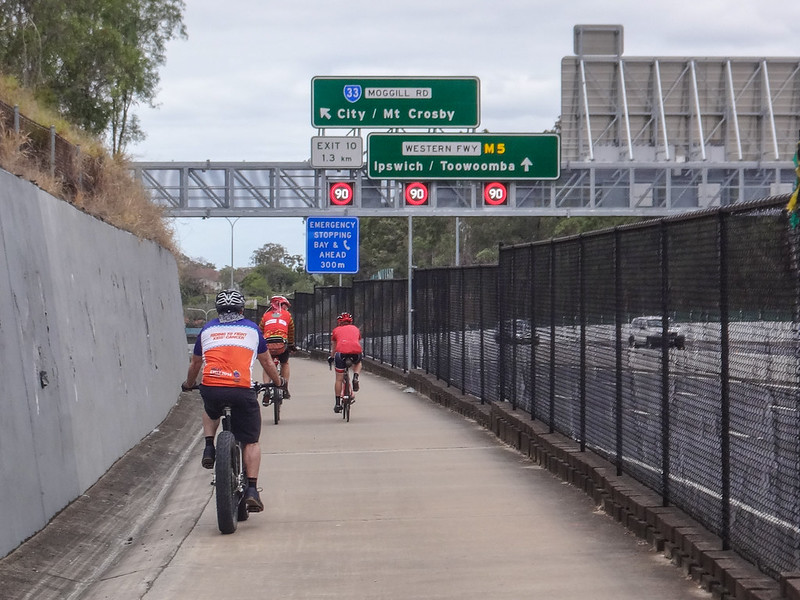 The bustling Western Freeway was a stark contrast to the peace of the river.

This commuter bikeway is quite noisy running along busy traffic for about 15 kilometres. 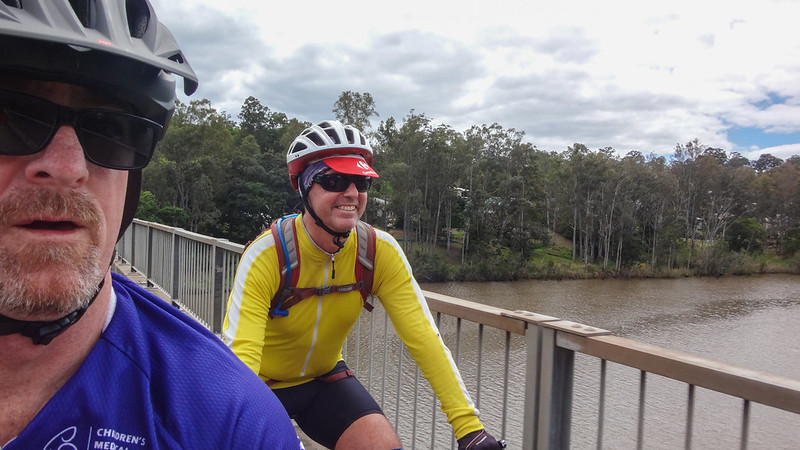 Despite the noisy urban environment, I was loving it.  Going without a bike ride for a couple of months helped me realize how much I enjoyed it. 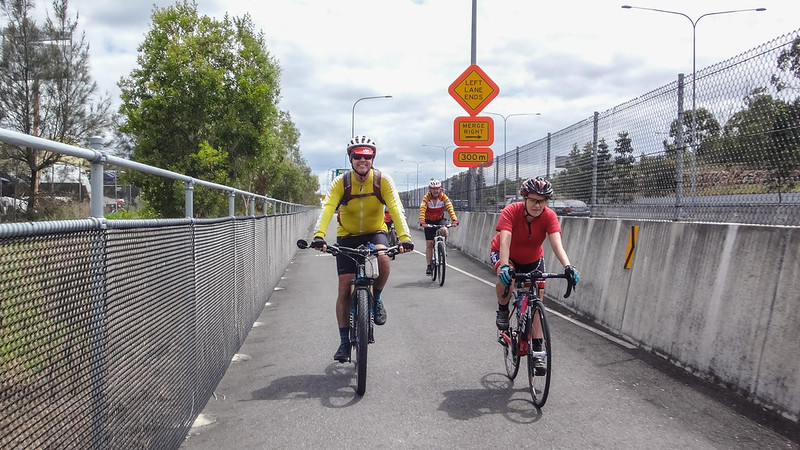 “Where to now?” we wondered.

My plan was to keep riding as long as it was enjoyable.

It was still enjoyable – I felt like we could go all day, so we pointed the bikes west and kept going. 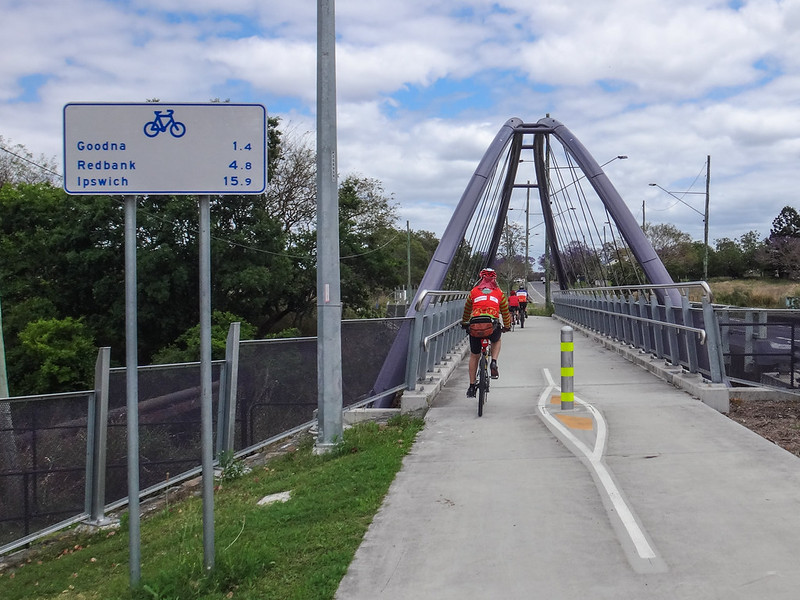 Even though I hadn’t plotted a course, the friendly signs pointed us in the right direction for most of the way. 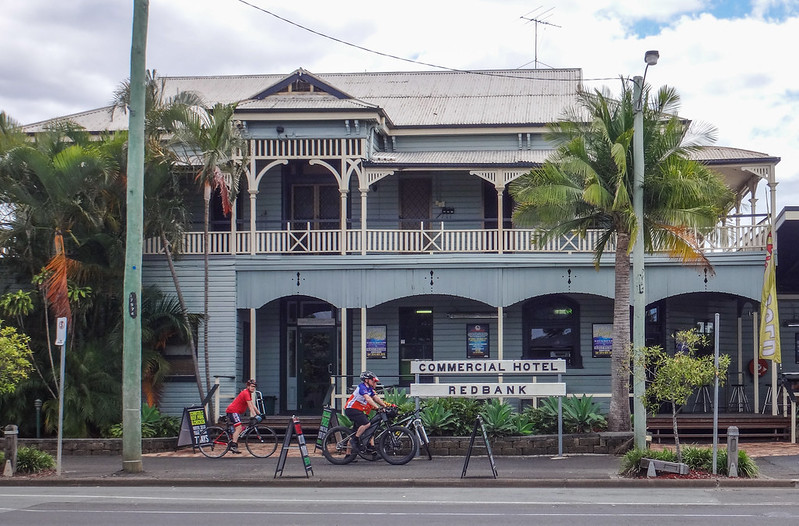 Around lunch time, we pulled into this grand old pub at Redbank. 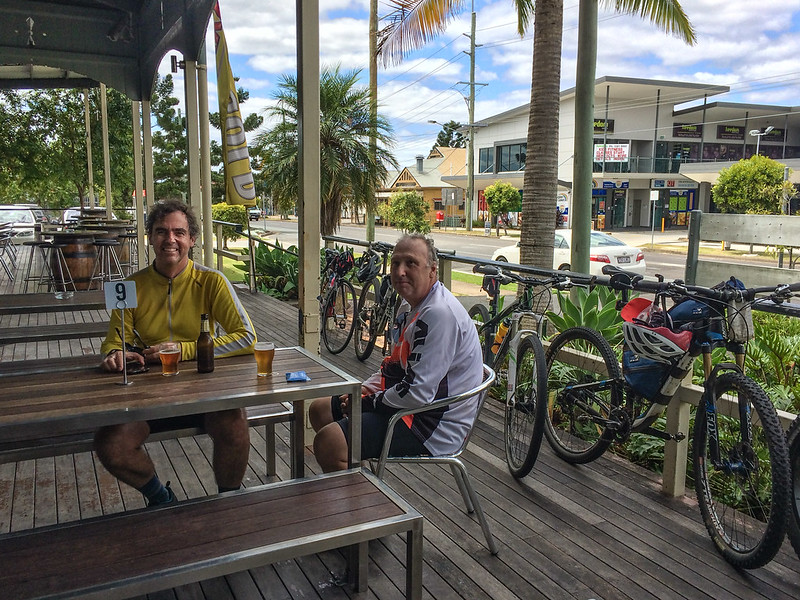 What a perfect spot for a cold beer… 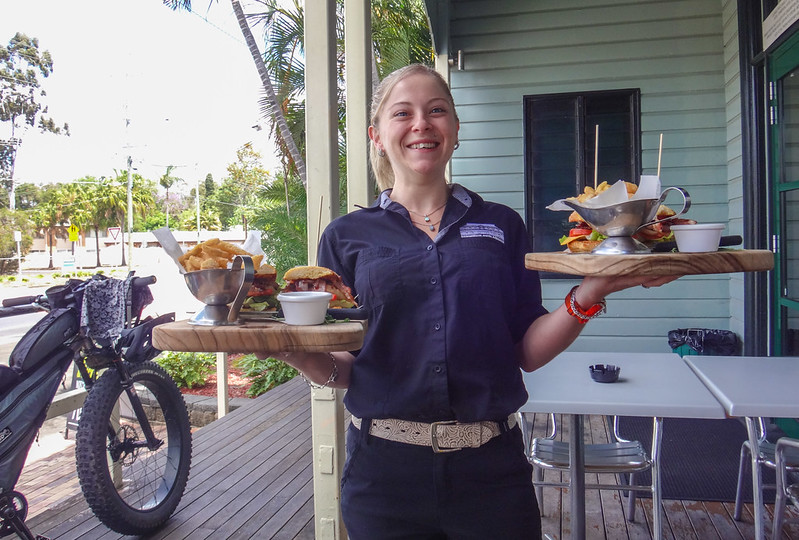 … and a mountainous steak sandwich.

After we left Redbank, we suddenly realized there were no more friendly signs telling us where to ride the bikes.

We decided to head for the centre of Ipswich, and maybe keep going to the Railway Station at Wulkuraka.

But without a course in the GPS we had to ride on the busy roads. 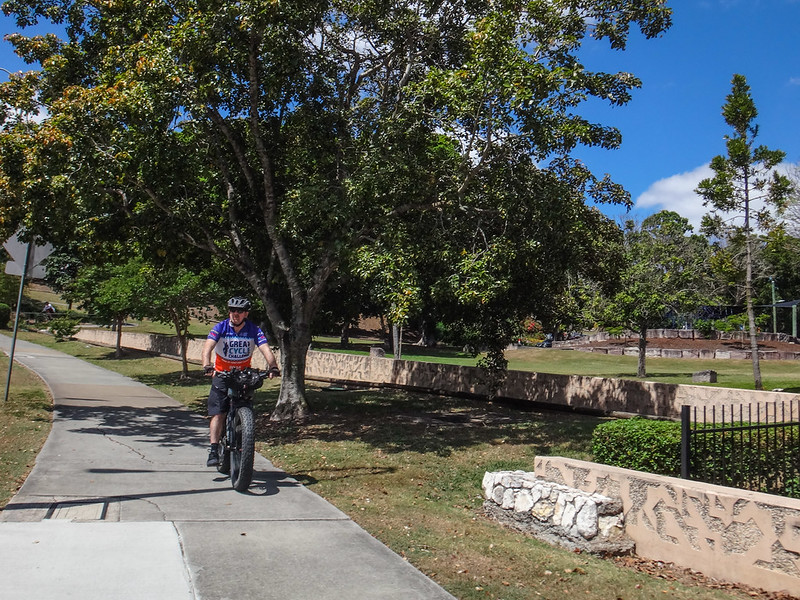 After ten minutes dodging busy cars, we decided to play it safe, get on the footpath, and look for quieter streets.

We also decided we’d have a go at riding to Wulkuraka.  It seemed a more interesting place that the middle of town, plus we’d been there last week.  It would be nice to join up the dots and hop on the train there.

So we hastened our pace and rode out through Brassall west of Ipswich.  If we hurried we’d get there a couple of minutes before the train arrived. 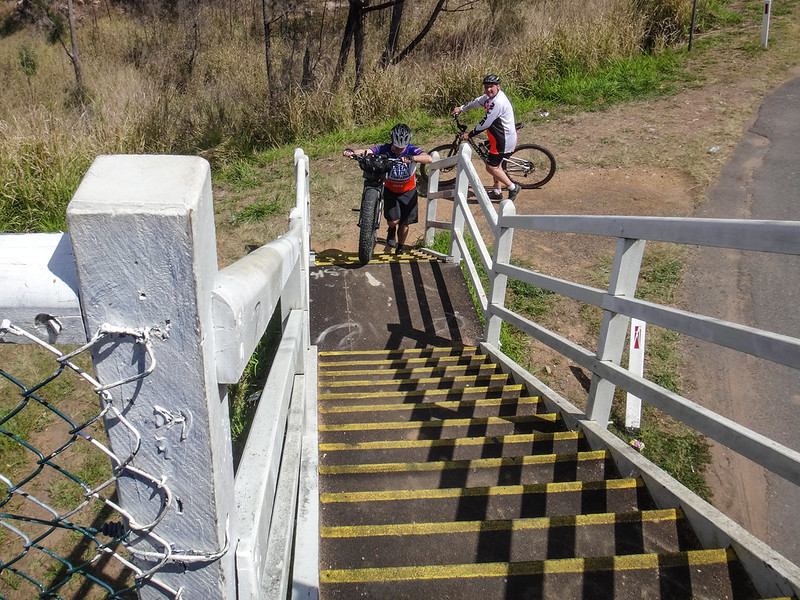 Imagine how stupid I felt after we arrived at Wulkuraka only to discover the station was closed.

There was a hole in the ground where the station used to be.  We wouldn’t be catching a train there today.

So followed the railway line back into town. 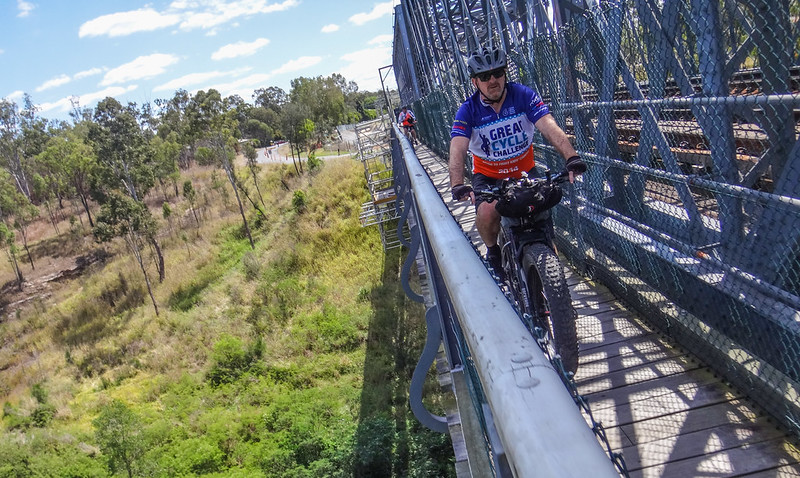 Luckily for us the railway bridge had a pedestrian walkway on the side.  We climbed up the stairs and pedaled over the narrow path.

If we hurried we’d make it into town before the next train left. 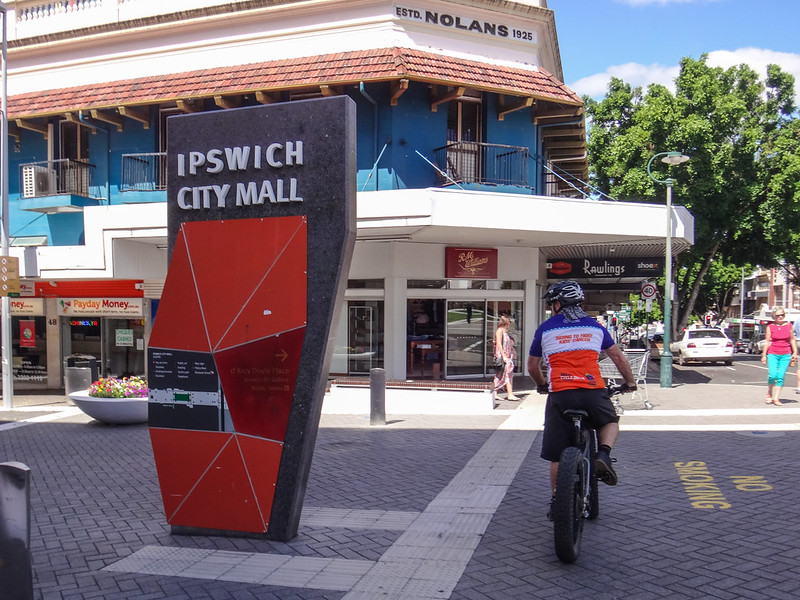 I urgently quizzed pedestrians as we arrived in town.

We arrived at the station about 30 seconds after the train pulled out, which meant we’d need to wait another half an hour.

But that was ok – this was a different sort of adventure.  We were making it up as we went along, so it was reasonable for us to face a few unexpected surprises. 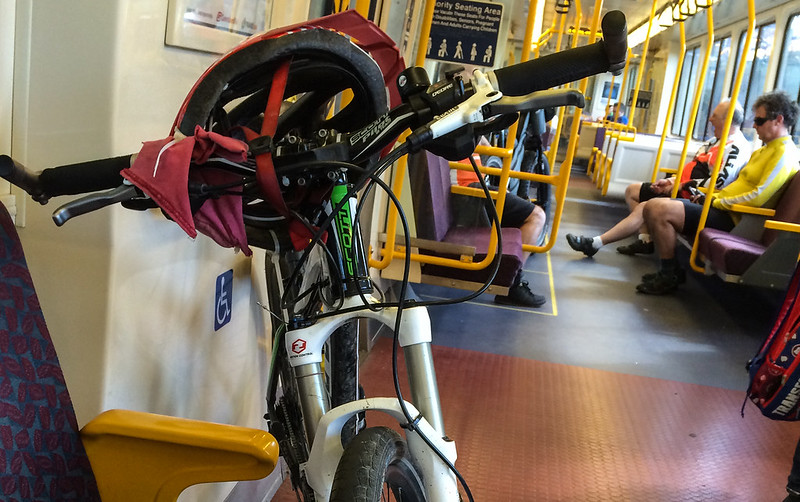 Eventually we dragged the bikes on the train for the long journey home.

Except there was one final surprise.  Darb had left his wallet at the Redbank Pub, so we had to go back and retrieve it. 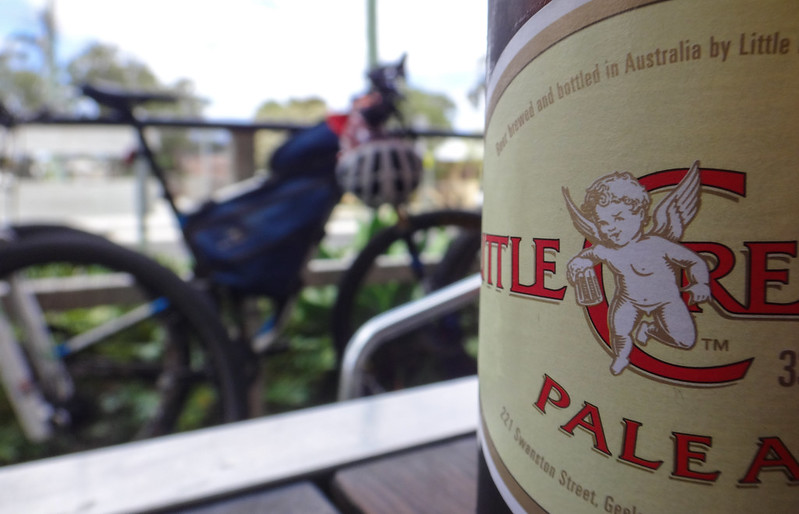 Which provided the perfect excuse for another cold beer while we waited for the train.

Including all the minor detours I rode about 97 kilometres in about seven and a half hours, burning about 3,300 kcal.

Apart from dodging traffic in Ipswich, and racing in vain to catch a train from a non-existent railway station, this was an easy (albeit long) ride.

I’ll rate it 6.5 out of 10 on the tough-o-meter, depending on how far you feel comfortable travelling, and how hungry you are for a long ride.

Thanks Darb, Becca, Russel and Simon for riding with me today.

It’s great to be riding again. 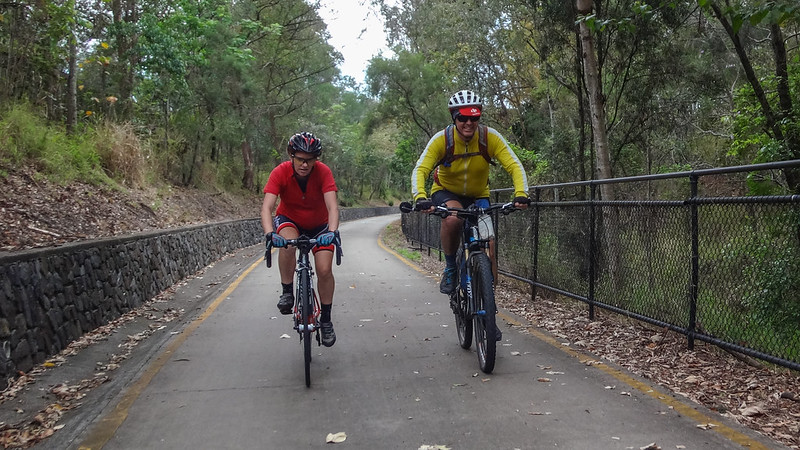