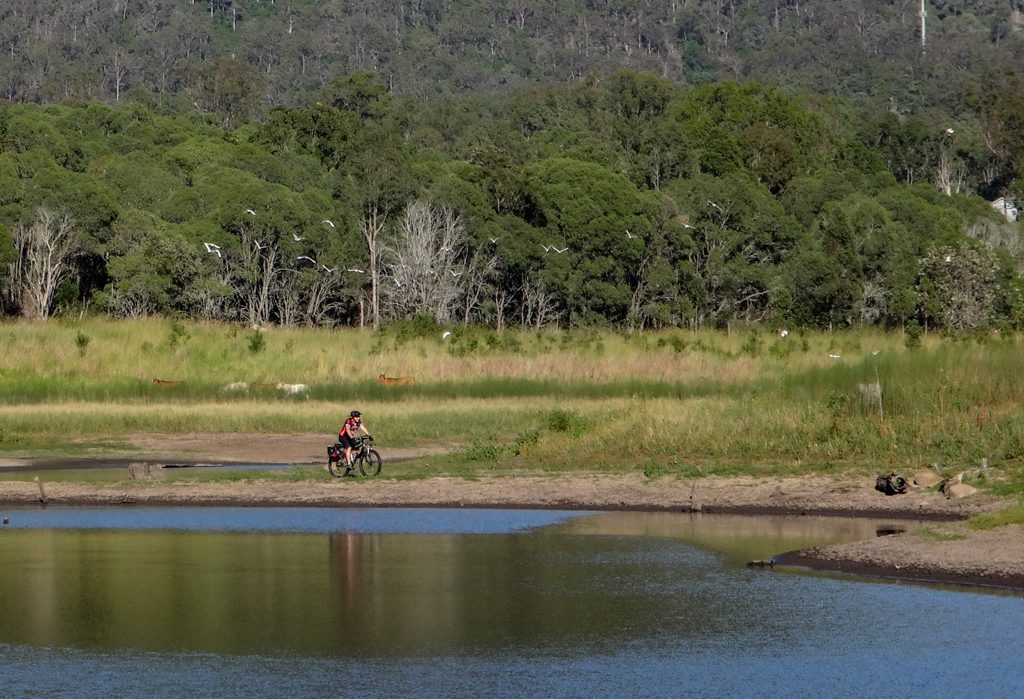 Almost fifty years ago, an entire town disappeared under the flood waters of a dam.  Now, long hidden sections of that town are starting to reappear as water levels recede due to dry weather. 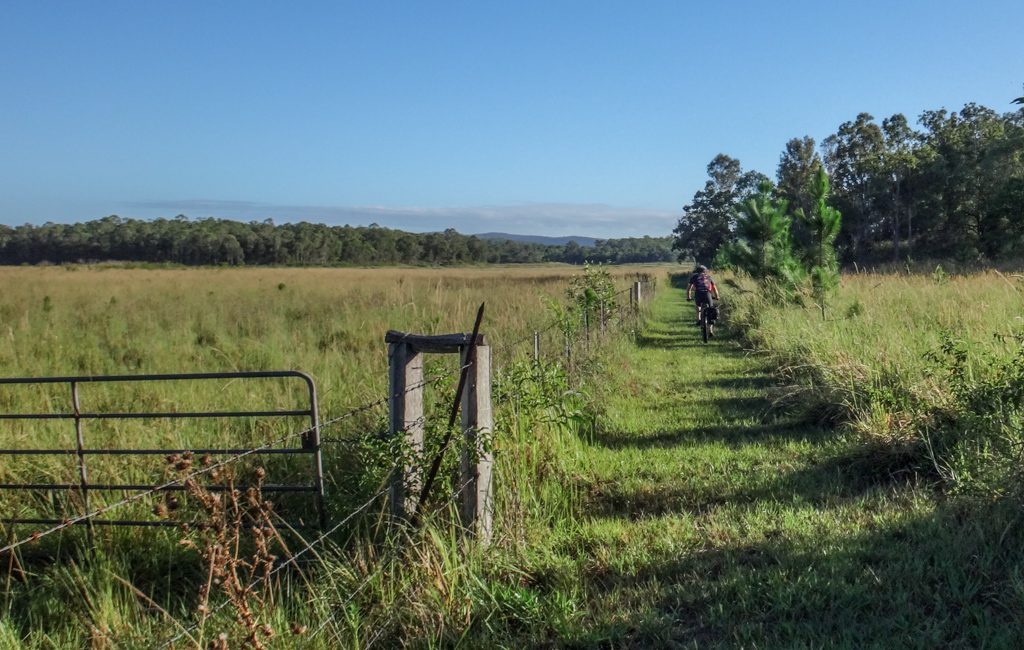 We started our ride at the small town of Mount Samson, and followed the remains of an old railway line north through grassy fields. 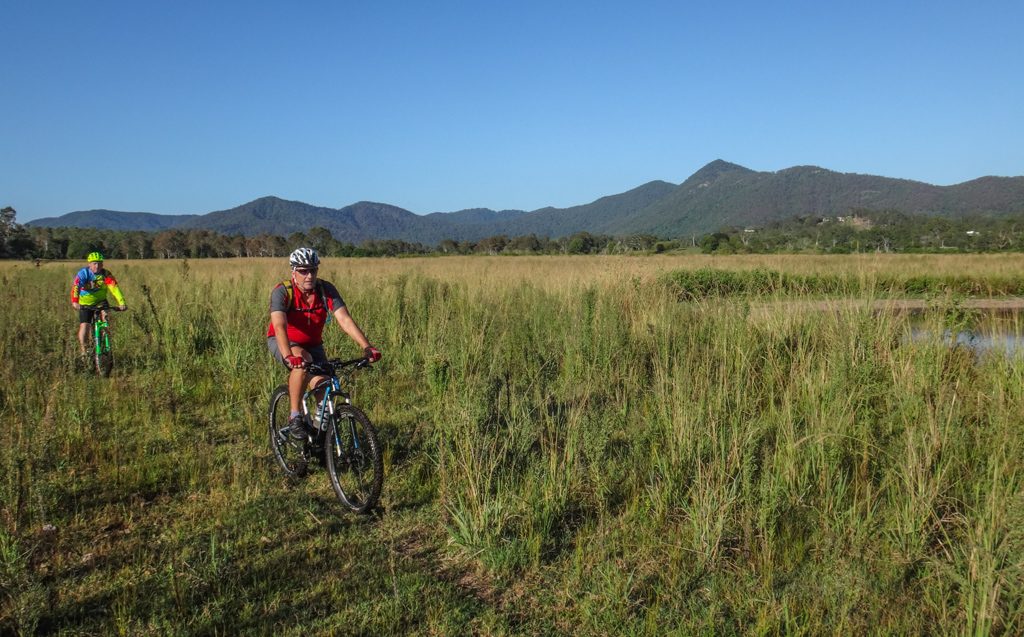 This railway line once linked thriving farming communities around Dayboro, Kobble Creek, Samsonvale and Samford to the city via Ferny Grove.

The rails were pulled up in the 1950’s due to lack of use.  Then, after the construction of the North Pine Dam, what was left of the rail corridor disappeared under Lake Samsonvale. 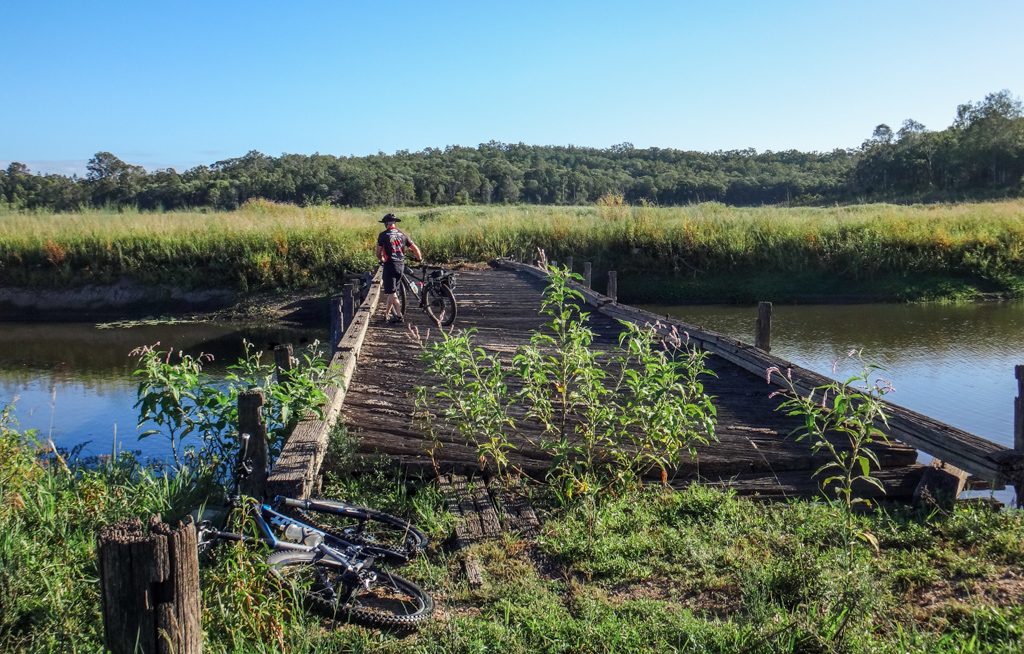 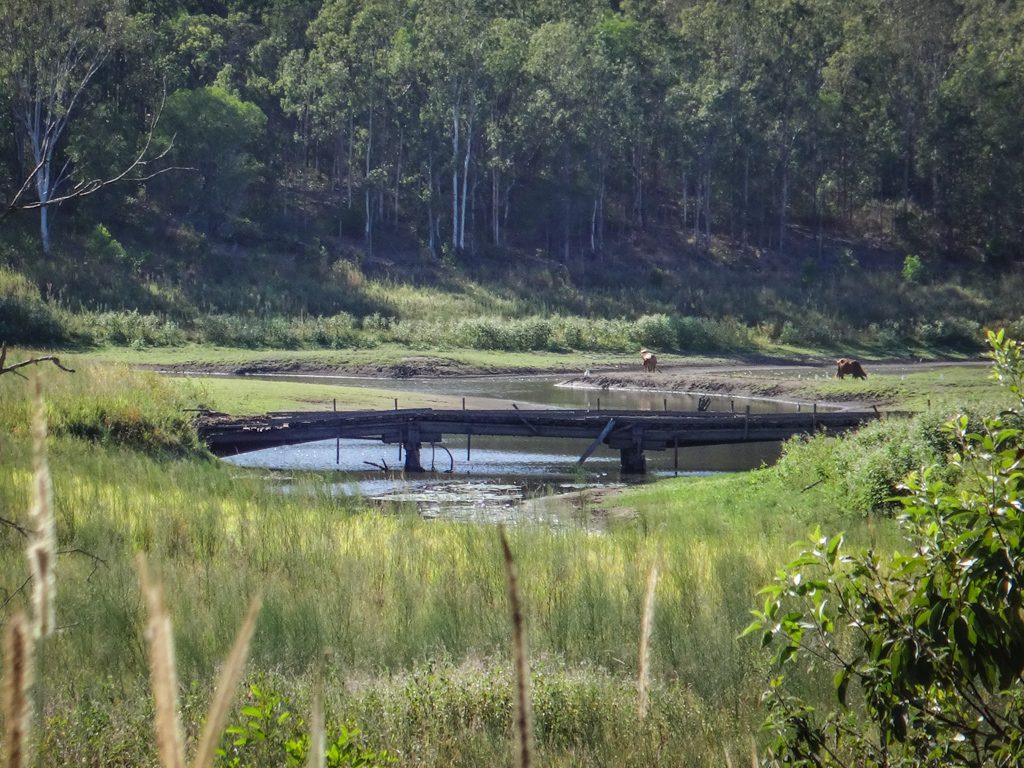 The town of Samsonvale was once here.  It is no more.  This old road bridge is one of the few remaining clues that the town ever existed.

We tiptoed carefully over the rotten wood.  The bridge has been submerged for decades and we didn’t want to fall through any weakened timber.

After crossing the bridge, we followed the remains of the road north through some tall “fukawi” grass.  I bravely let Jason and Ron go ahead of me to forge a path and clear the spider webs. 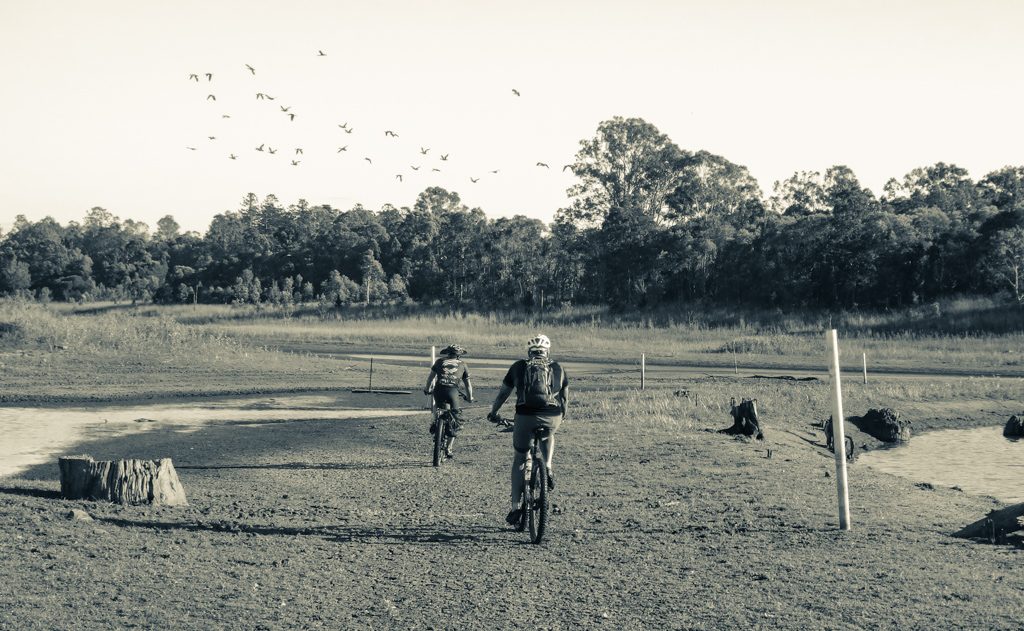 The road disappeared into a muddy bog where it crossed Mount Samson Creek.  We couldn’t walk through, so we looked for a way around. 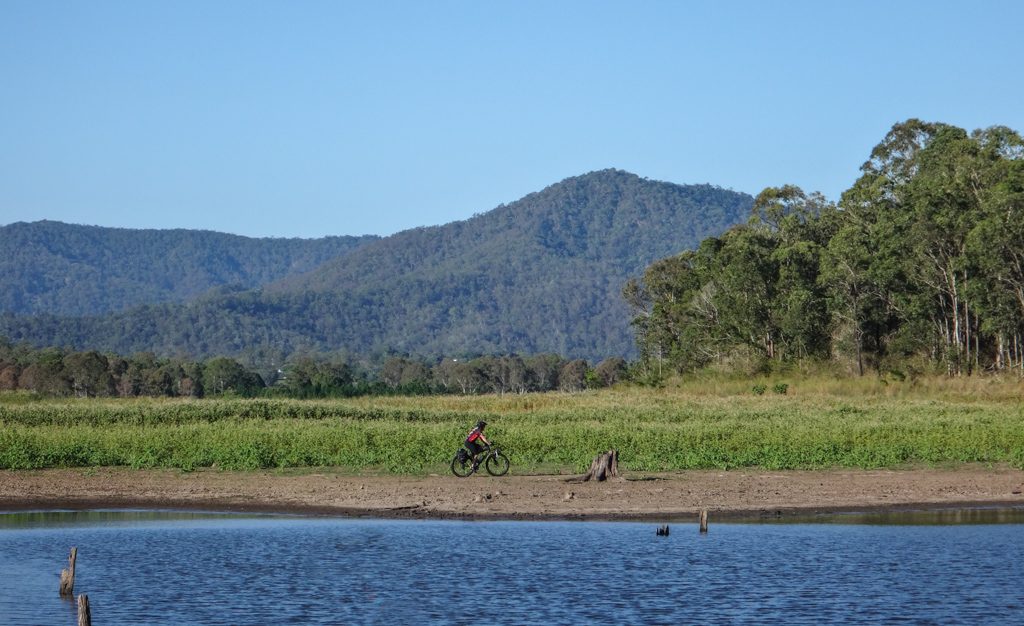 We followed the dried mud around the creek’s edge and eventually found a way over the other side. 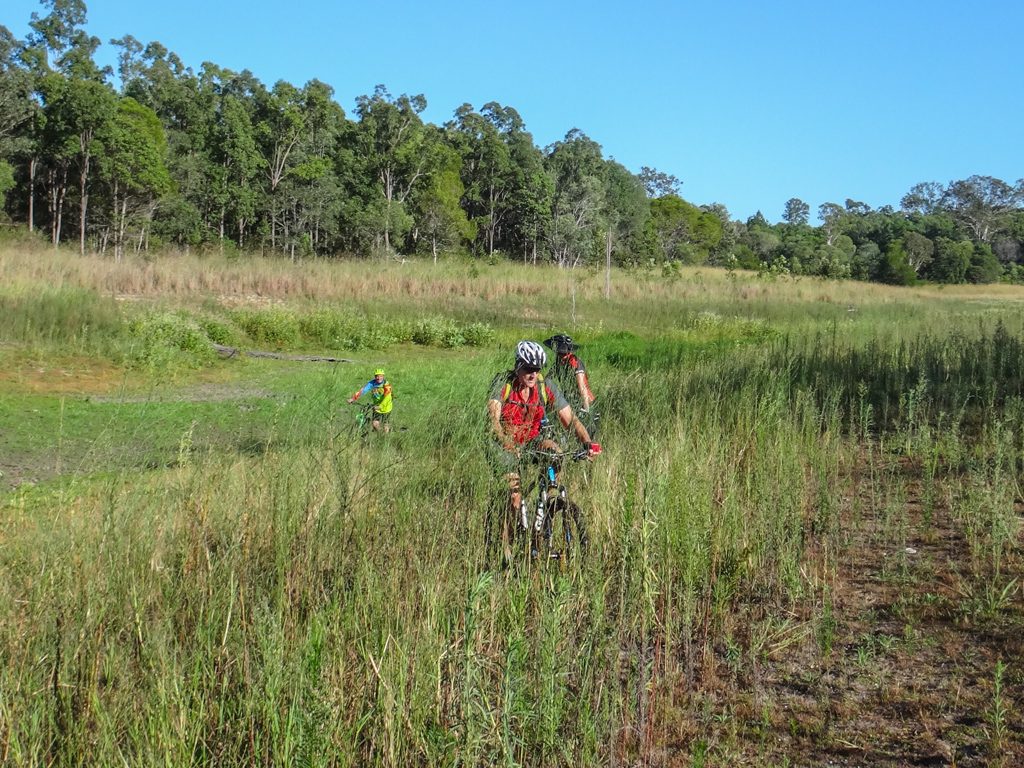 This area once boasted some of the richest farmland in the district. Today, instead of lush pastureland and sleek cattle we had to deal with dried mud and tall weeds. 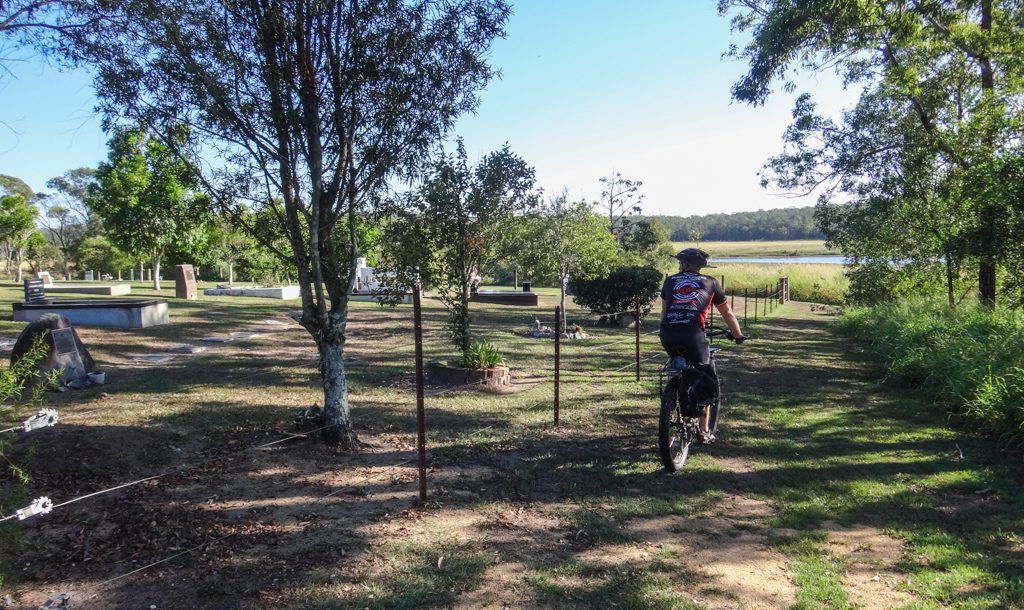 After following the old road northwards a little longer, we emerged at Samsonvale Cemetery.

The residents of the cemetery now have great waterside views over the lake.

I pointed out Joyners Hill on the other side of the water.  It’s close to where the Joyner family built their homestead when they first settled here in the 1840’s. 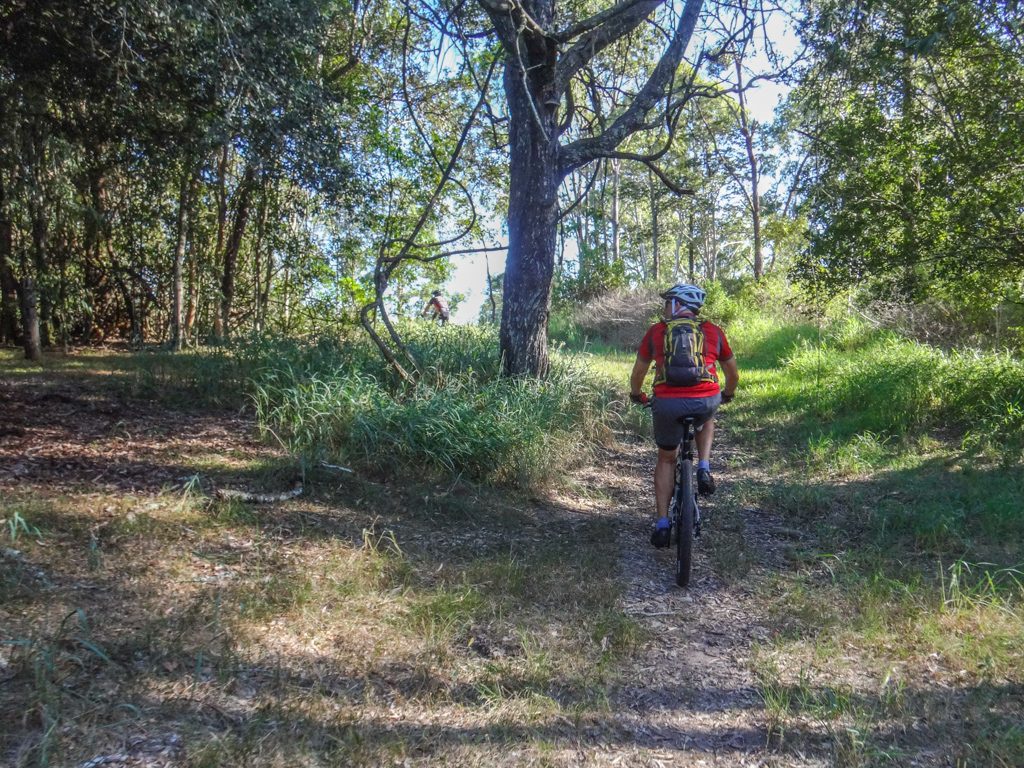 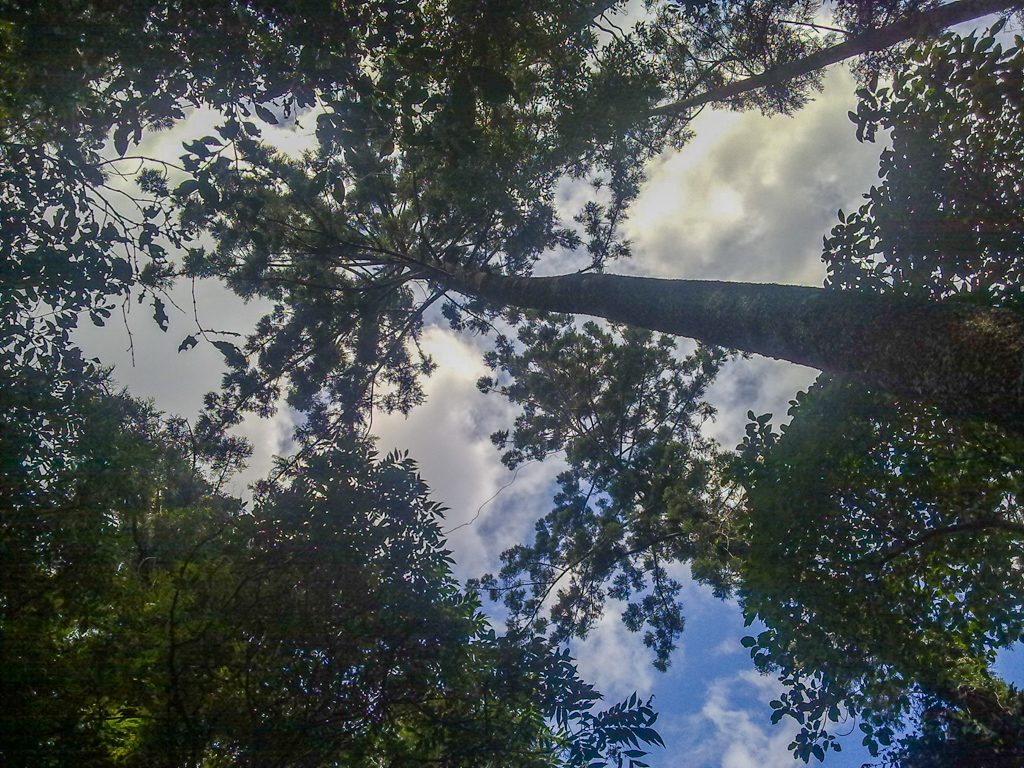 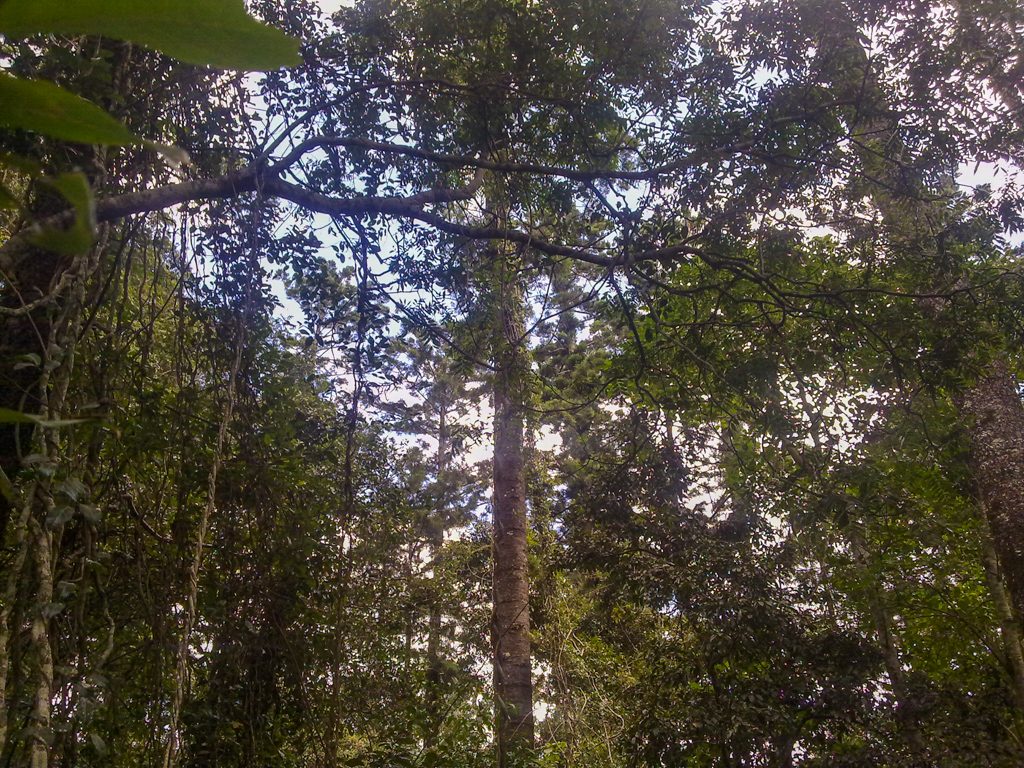 “Golds Scrub” is a large circular patch of Hoop Pines near the cemetery.  It has never been cleared and gives us a hint at what the landscape around the North Pine River would have been like before European settlement.  We skirted around it peeking curiously into the thick forest. 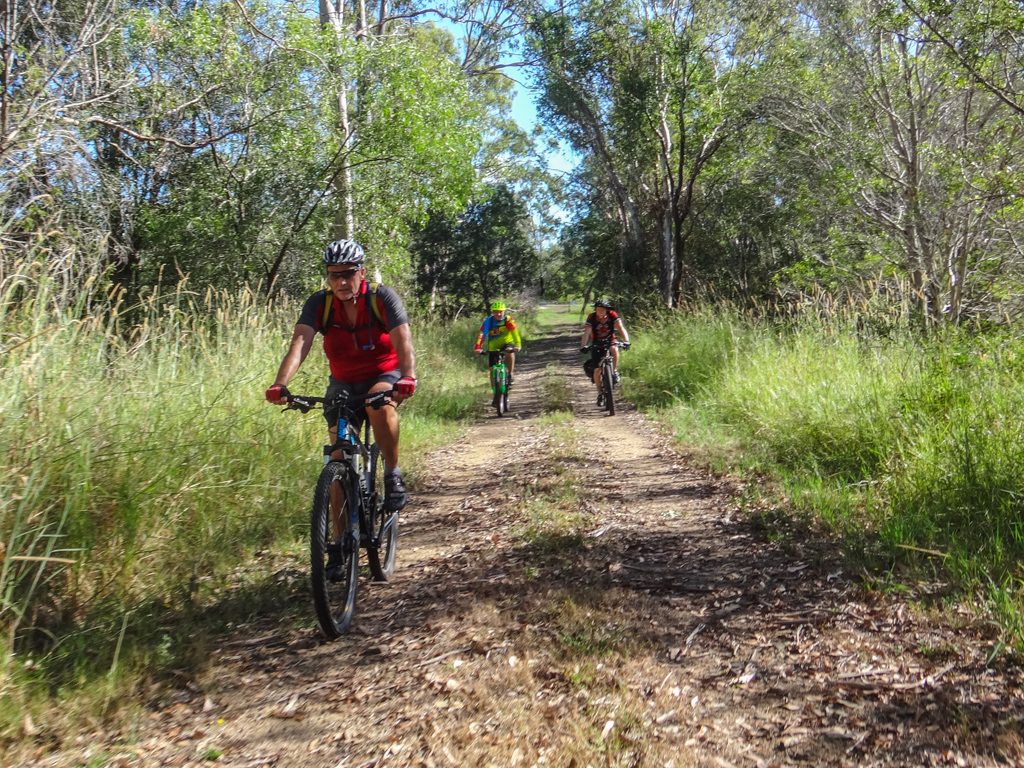 On the other side of Golds Scrub, we found the railway line again.  This time we followed it south back towards our starting point. 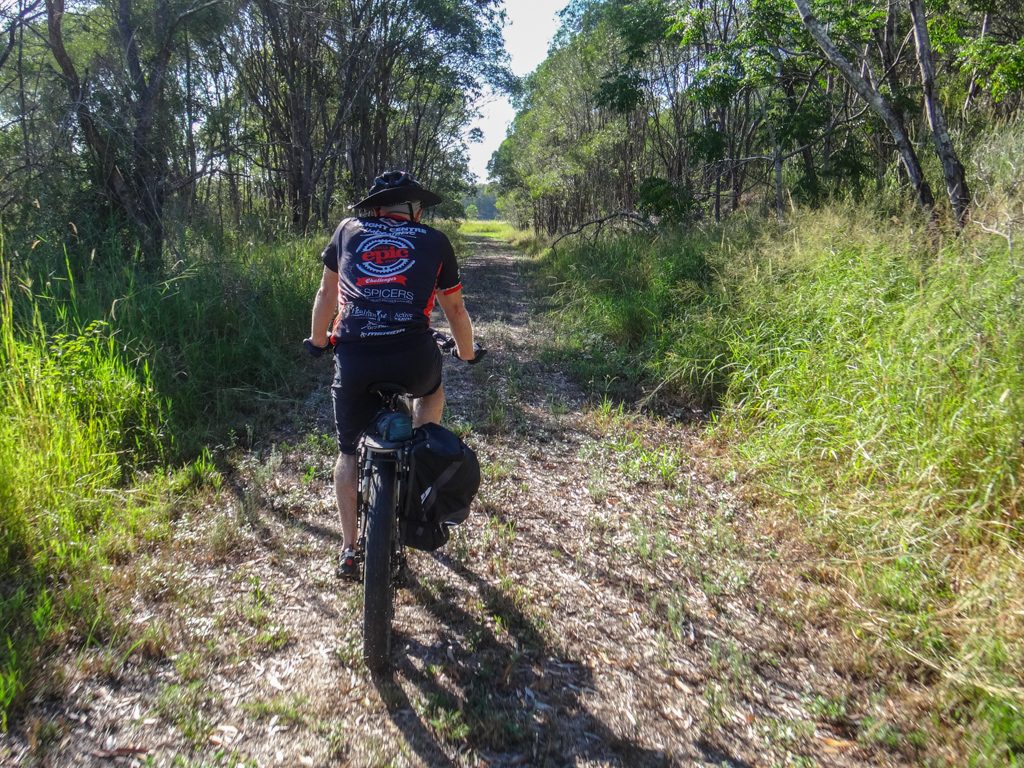 We had ridden this way last week as part of our off-road ride around the entire lake.  Last week we had cut the ride short at this point due to hot weather and lack of water.  I was grateful we were able to return and finish off the job. 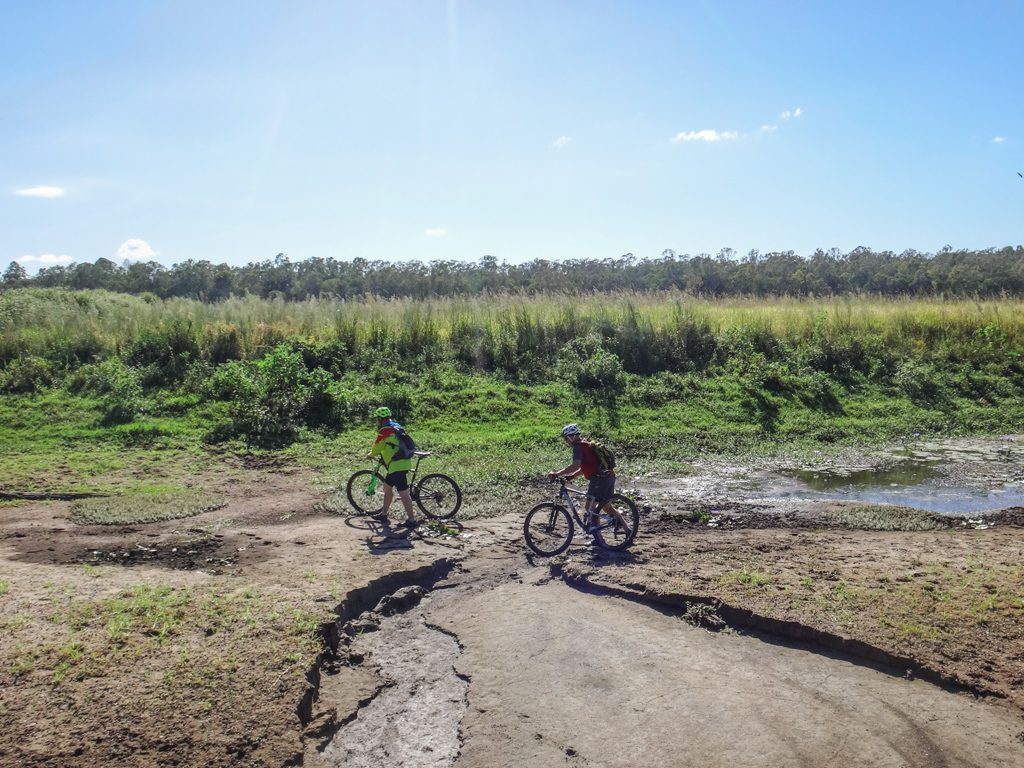 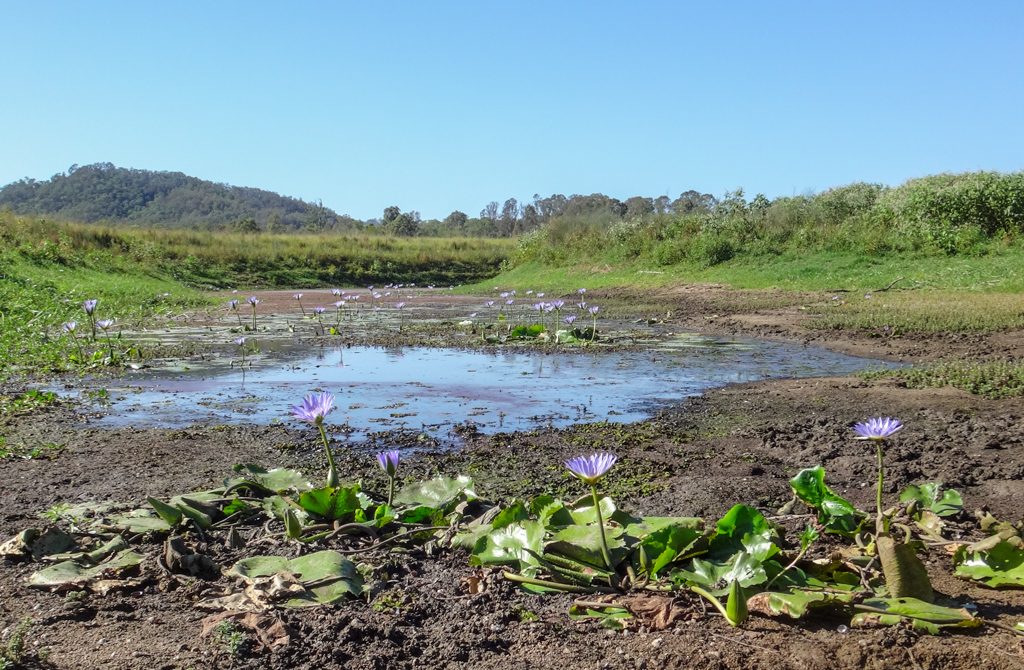 The railway line was supposed to cross Mount Samson Creek somewhere near here, but there didn’t appear to be any bridge.

Luckily we found a spot where the mud wasn’t too deep and pushed our way over to the other side. 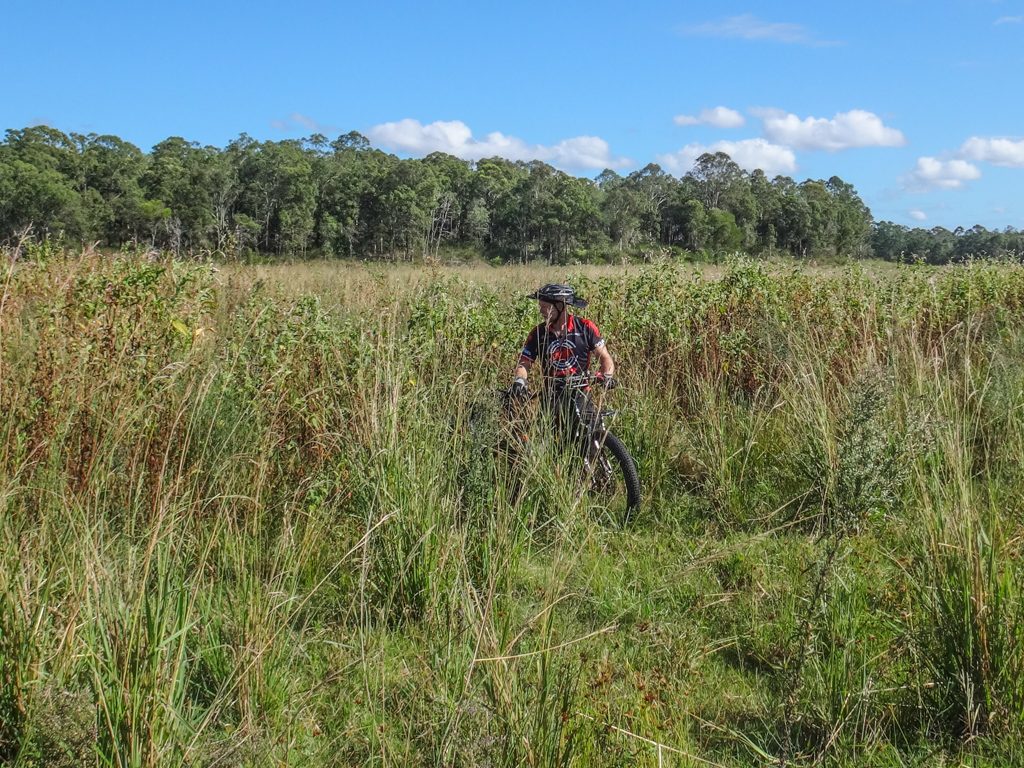 Over our heads again in long grass we slowly pushed our way back to the railway line. 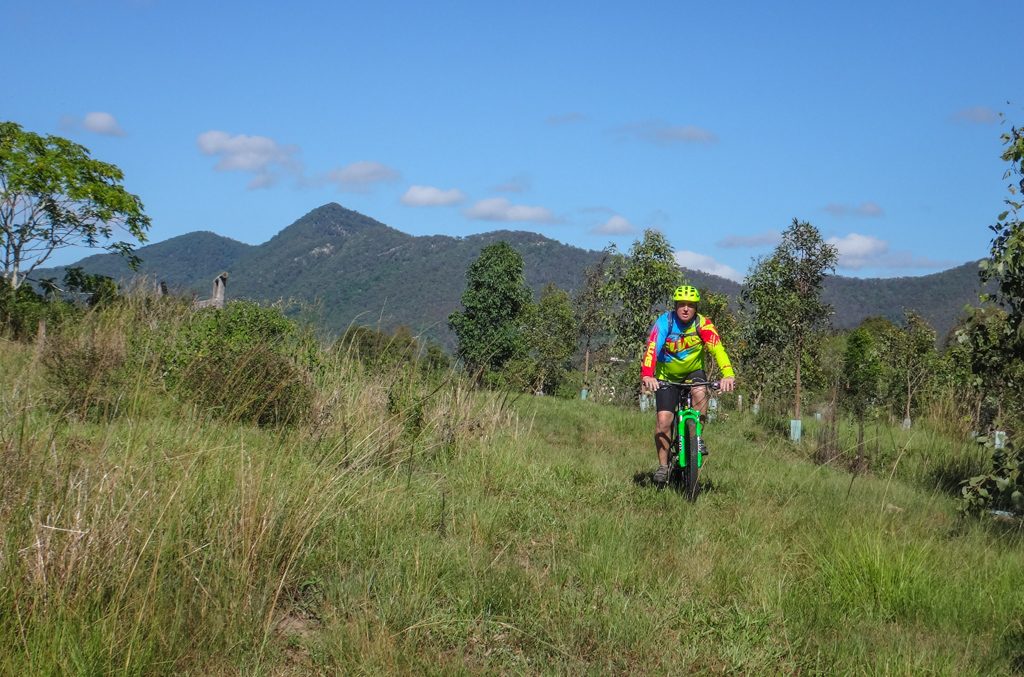 All of the places around here take their names from the unmistakable pyramid-shaped mountain: Samsonvale, Samford, Lake Samsonvale, Mount Samson.

Mount Samson was named after Sydney Barrister John Sampson (1797 – 1829) by Alan Cunningham. Cunningham named another peak on the other side of the D’Aguilar Range “Mount Sampson” in 1829, not realising John Oxley had already named it “Mount England” in 1824. No one is quite sure, but eventually, the name “Mount Samson” (without the “P”) was transposed to the current peak. 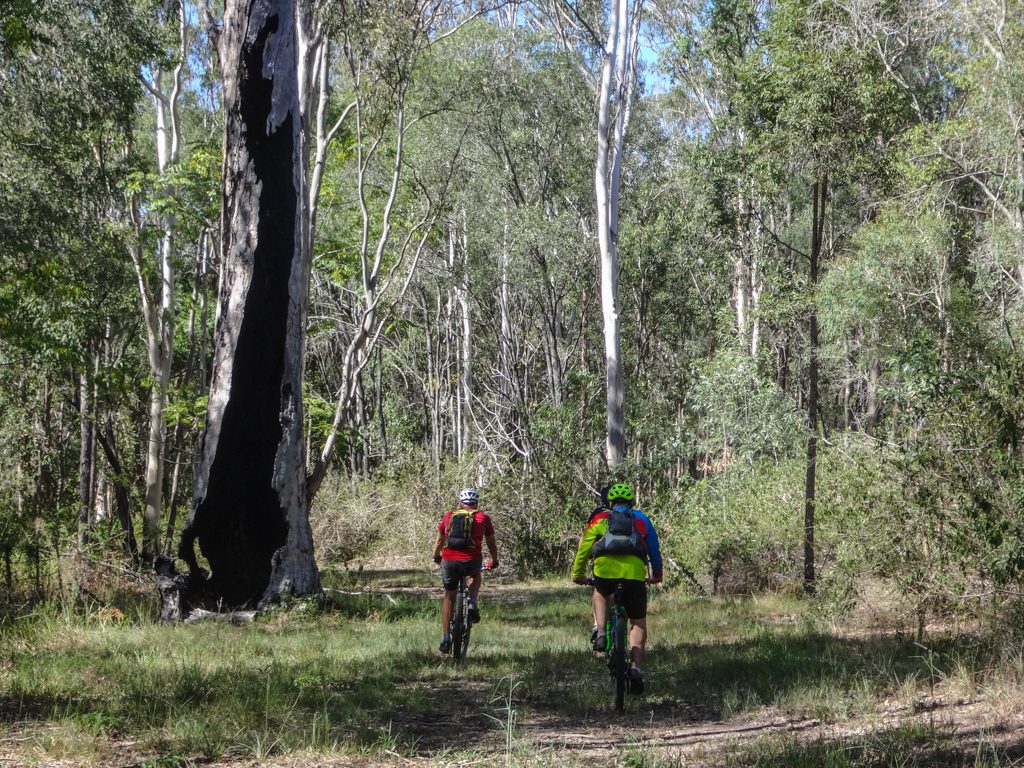 We still had plenty of time left so we continued our ride eastwards, following the shoreline beside the lake a little further. 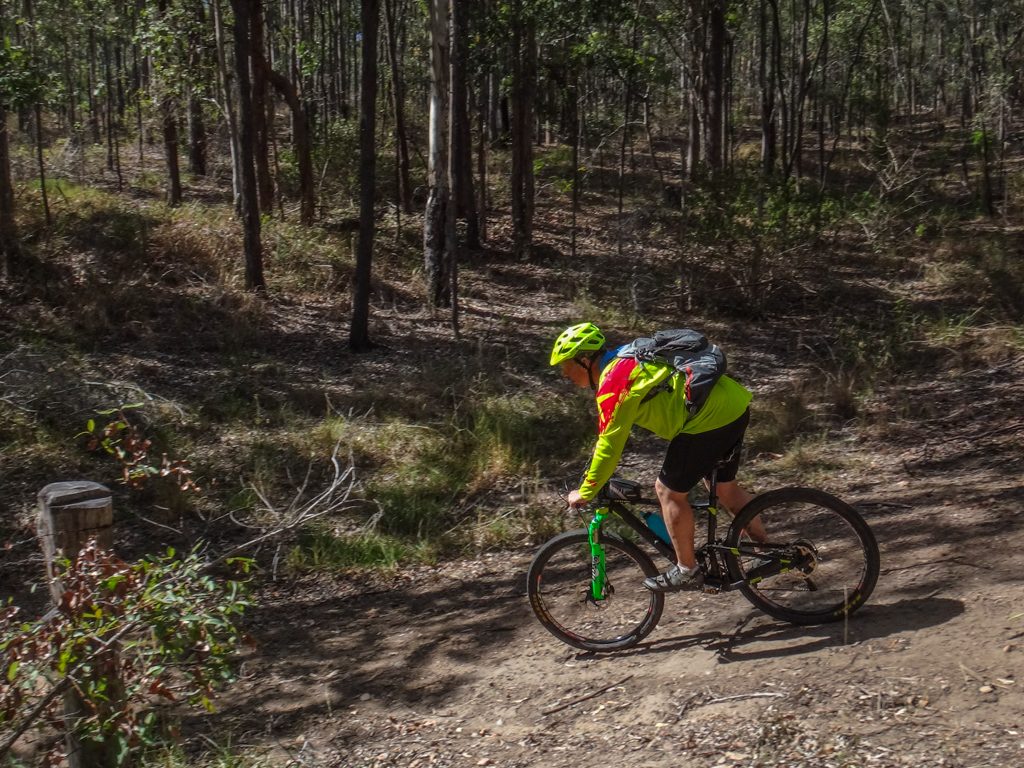 The trails here are endless, twisting around small inlets, and through small gullies. 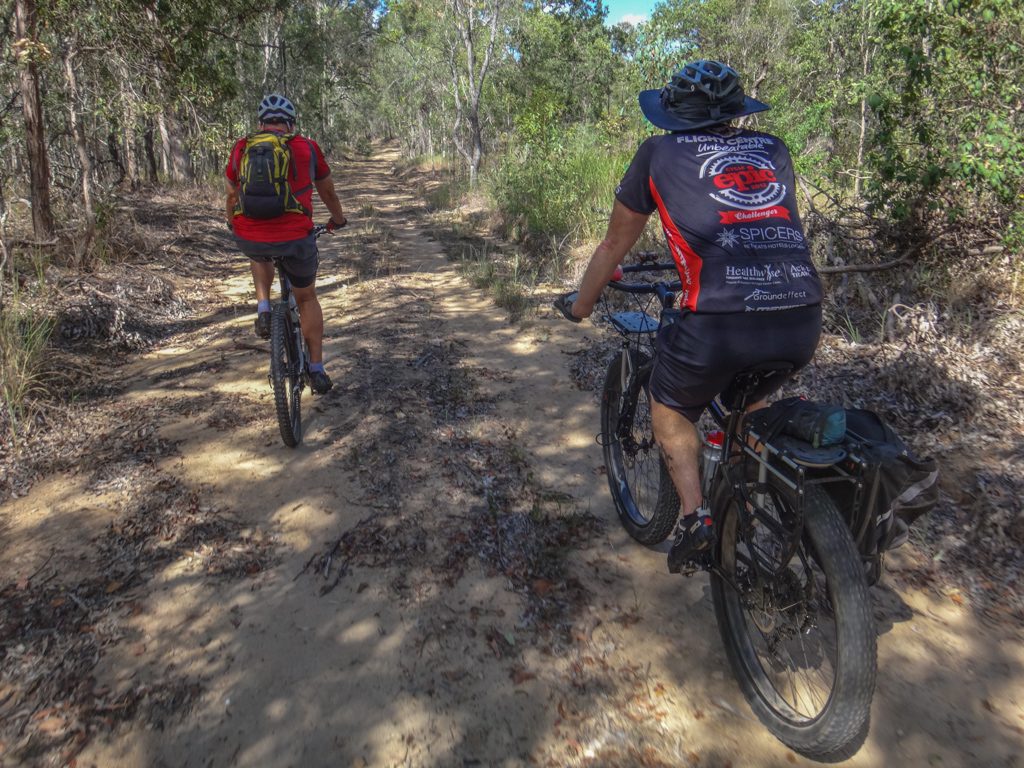 A hungry mountain biker could ride here for hours. 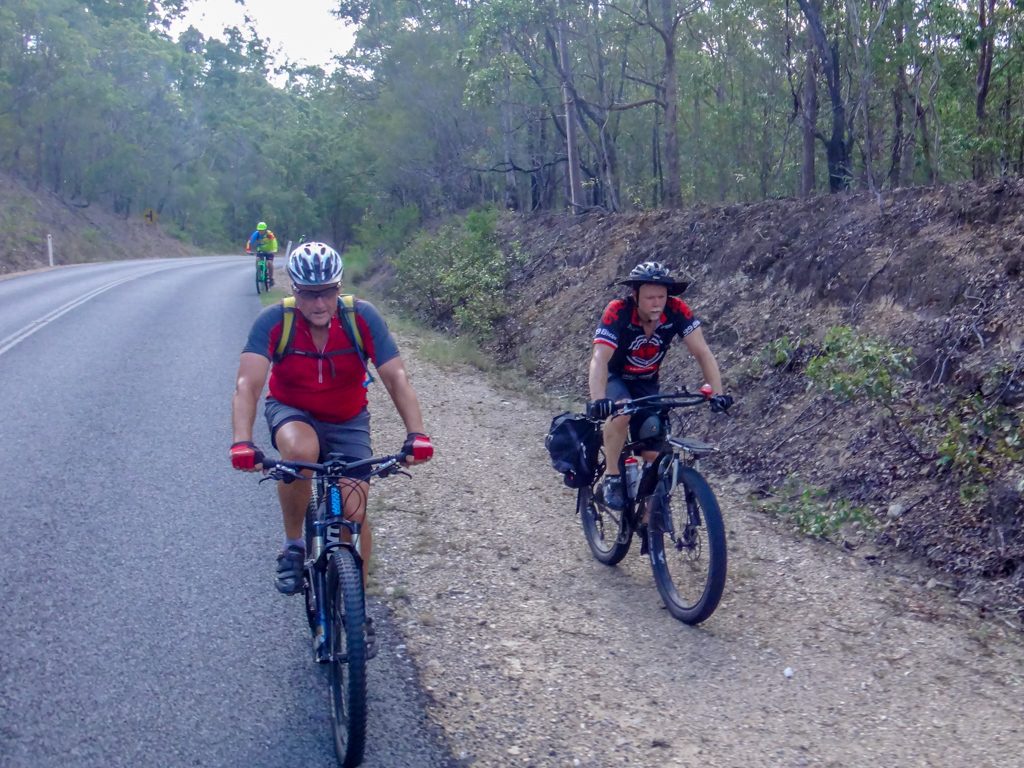 We emerged at Winn Road, not far from where we had begun our ride and rode the short distance back to our starting point.

In contrast to last week’s epic, this was an easy ride. We rode about 16 kilometres in about two and a half hours. I burned just over 1,000 kcal and we climbed about 180 metres in vertical elevation.

Thanks, Jason, Ron and Simon for another fun adventure!