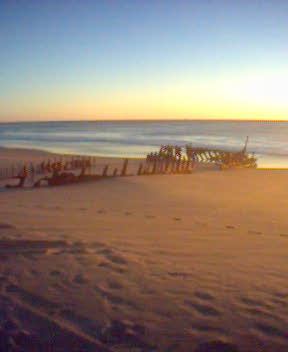 (The wreck of the Dicky, Dicky Beach, Caloundra).

I took this photo at sunrise with my Sony Ericsson mobile phone one morning while we were holidaying at Caloundra last winter. It’s a beautiful part of the world to be in during the winter with no crowds, and very reasonable accommodation prices.

The Dicky was a 96 foot Iron Steamship built in Germany in 1883.

Ten years into her working life, she was caught in a heavy north-easterly storm off Caloundra Head in February 1893, and ran aground at what we now know as Dicky Beach.

Thankfully, all passengers and crew were saved.

Legend has it that the skipper of the Dicky had trouble with visibility during the storm, and mistakenly assumed that he had rounded Caloundra Head, when in fact it was still a long way off.

The engine from the Dicky was salvaged from the wreck and used in the “Lady Norman” – a larger Iron ship, almost 130 feet long. Lady Norman had a much longer life, eventually being scuttled in 1969 on Curtin Artificial Reef in Moreton Bay.

The lesson for us amatuer sailors is that stormy weather is treacherous. If a 226 ton Iron steamer can run aground in a storm, how much easier a lighter lady such as my own Myuna II (10 tonnes, 36 feet)?

As the saying goes, there are plenty of bold saiors, plenty of old sailors, but not many old, bold sailors.

I think I’ll be extra careful in the next storm!

Happy New Year!
The Big Walk
Paddle and Pedal
Bush and Beach Epic (Part 2)
Up & Down