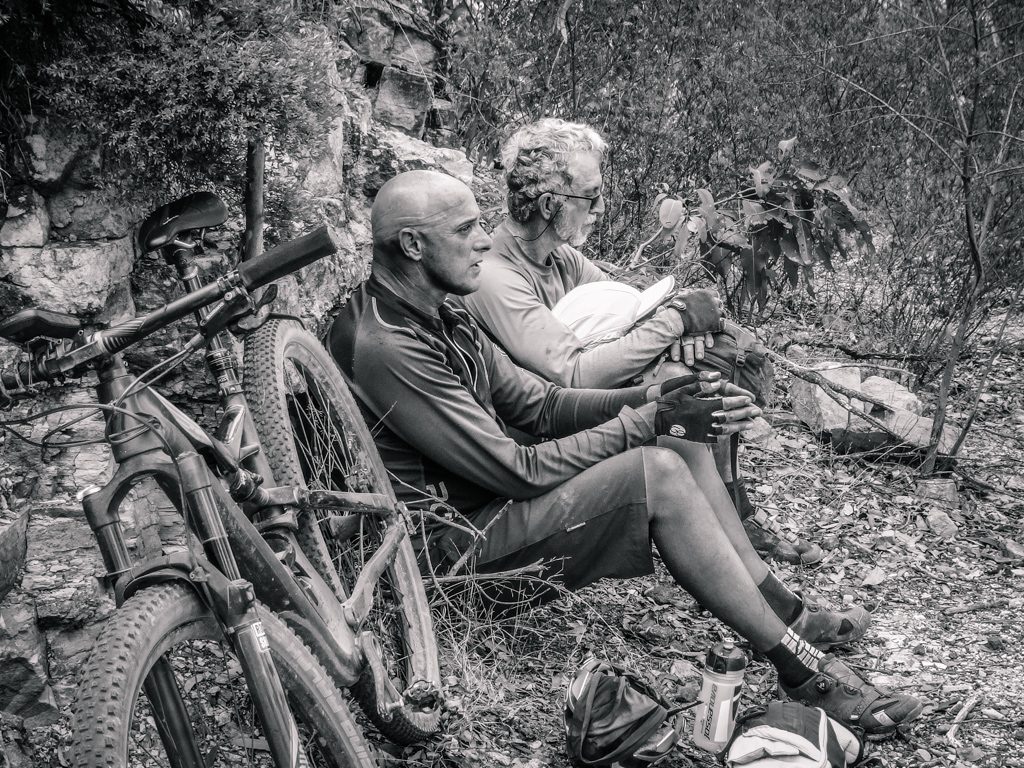 The tracks looked interesting on the map… but I didn’t realize they’d be so steep.

Spring Mountain is a wonderful place to explore, provided you don’t mind pushing your bike up a few hills. 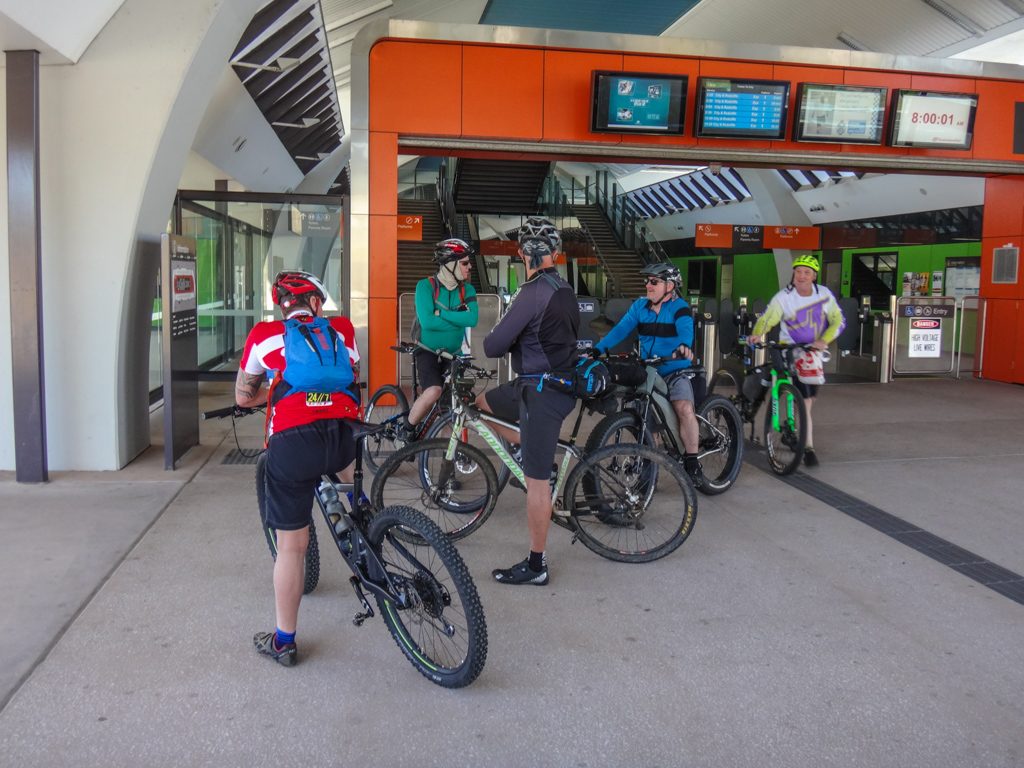 This was a “point to point” ride.  We took our bikes on the train to Springfield Central.  The plan was  to ride through the bush for a few hours, ending up at Redbank railway station, 40 km away, where we could get the train home. 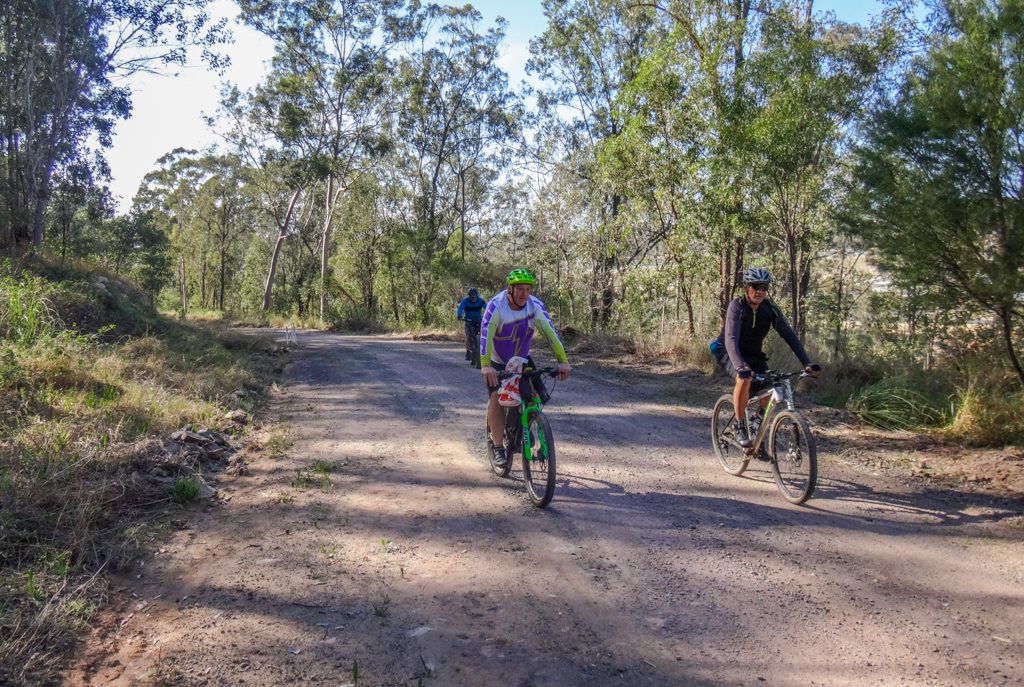 A few hundred metres after leaving the train, we rode into bushland near Springfield.  Despite the frantic pace of housing development around here, there are still vast tracts of forests to explore. 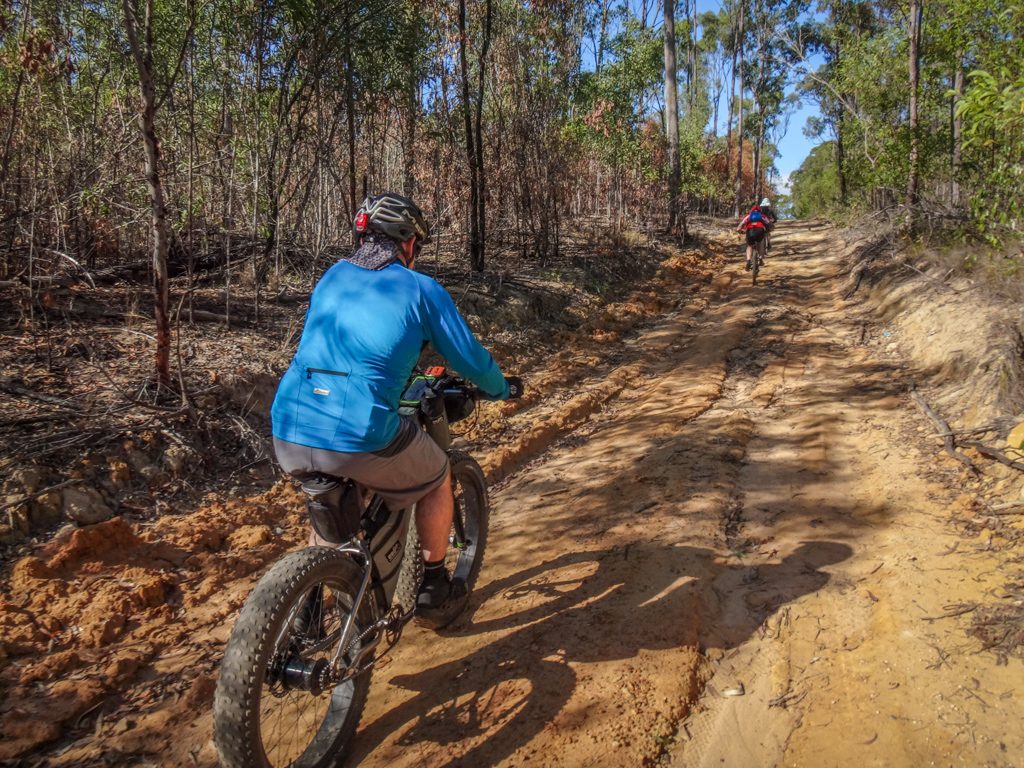 We bounced over rough clay tracks, through soft sand, and over rocks on our way to some fun single-tracks we had discovered a couple of weeks earlier. 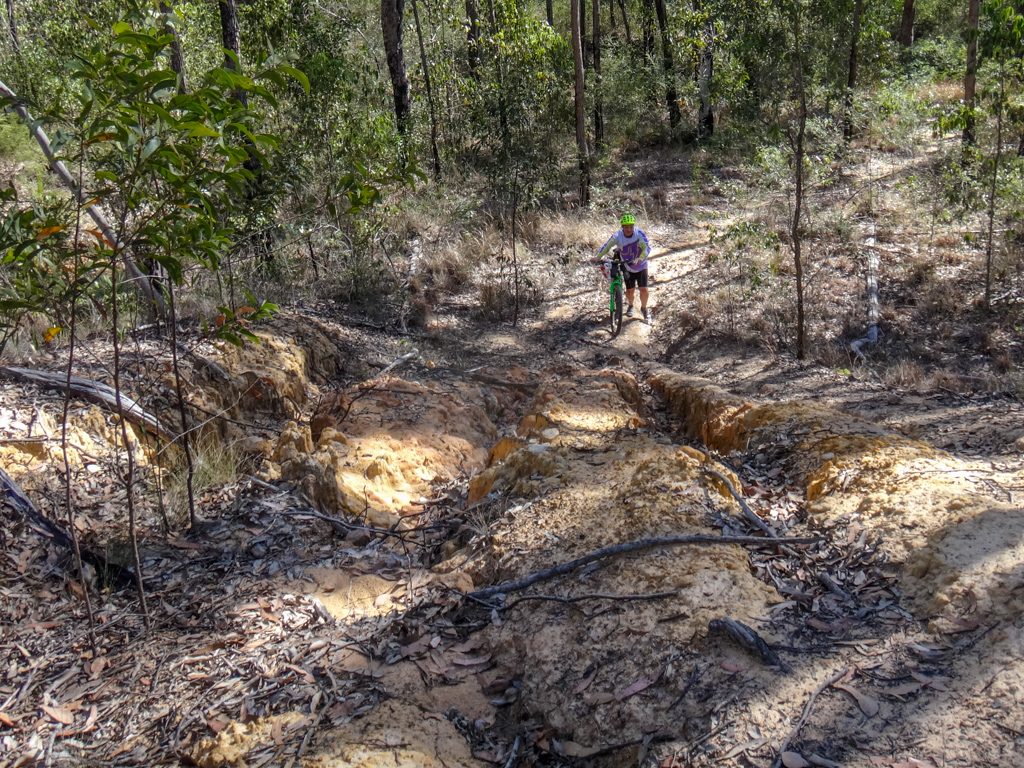 “This track looks interesting.  Why don’t we explore it?” 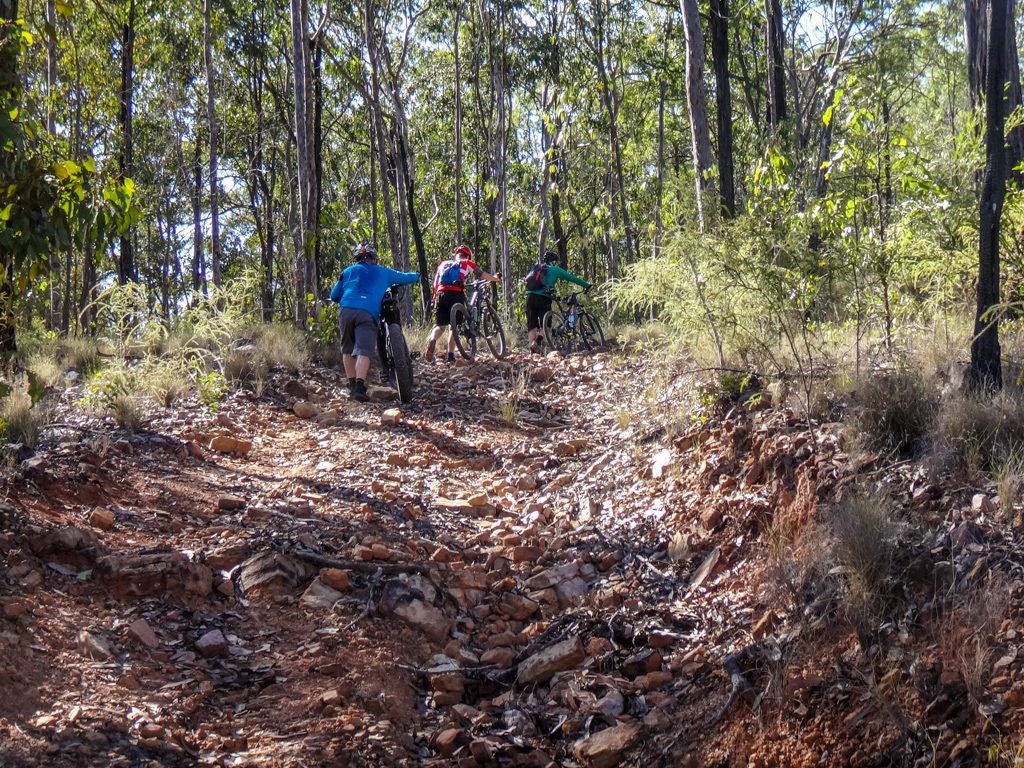 It wasn’t my best idea 🙂 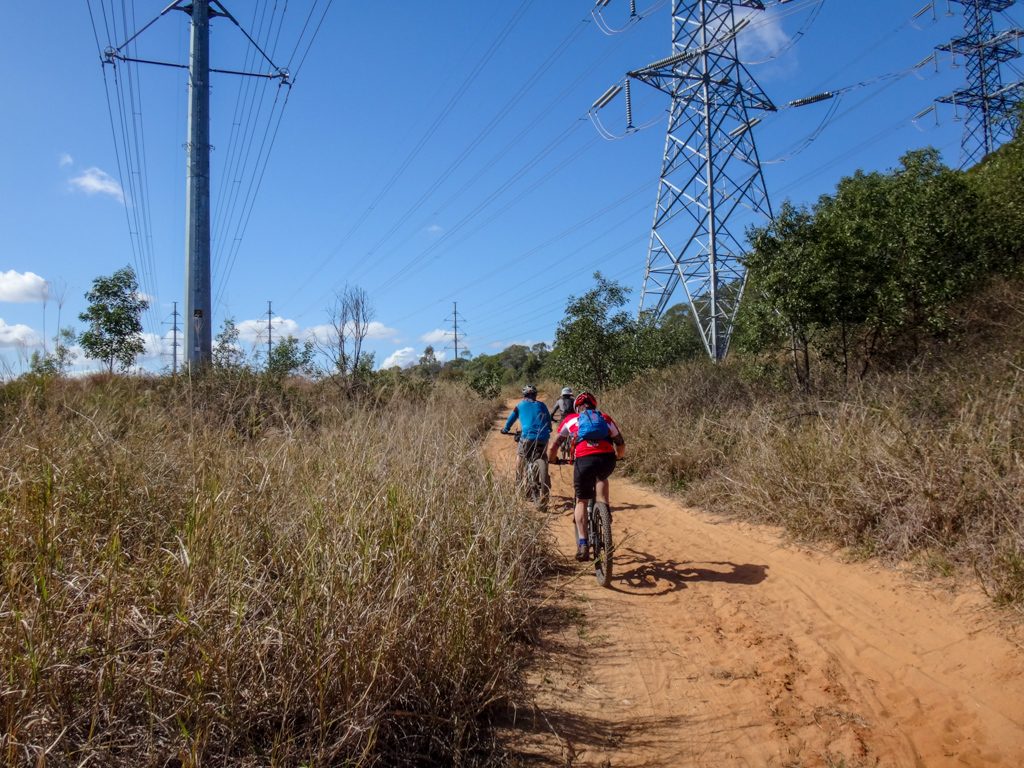 After half an hour of hard work, we emerged on the familiar Yaddamun Trail and followed it to the single-tracks. 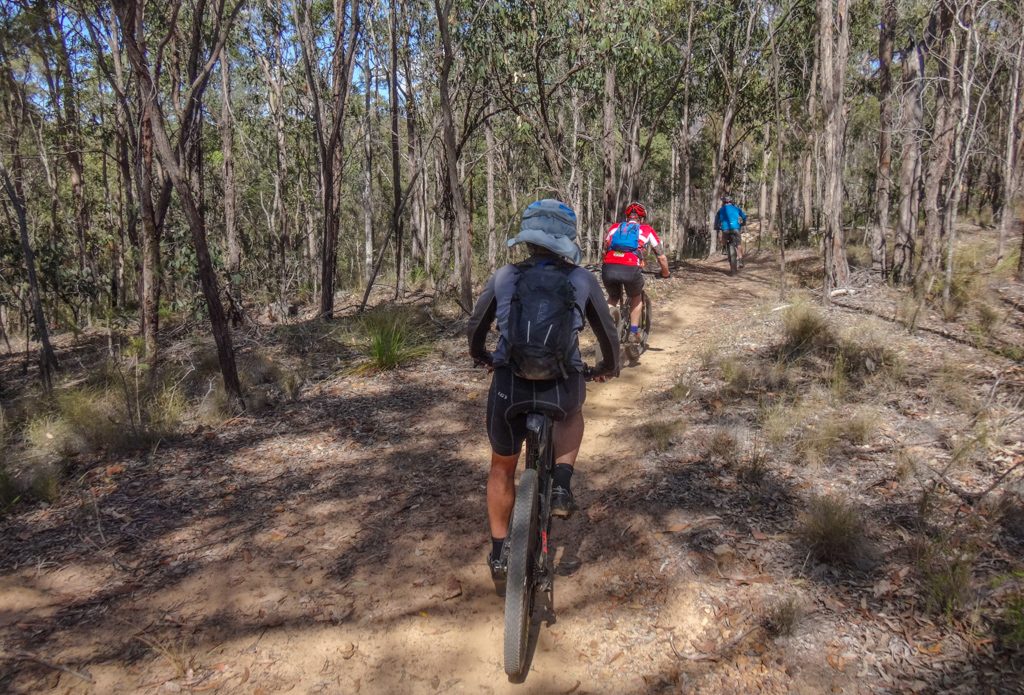 The Horseshoe Trail followed the contours of the hillside gently upwards… 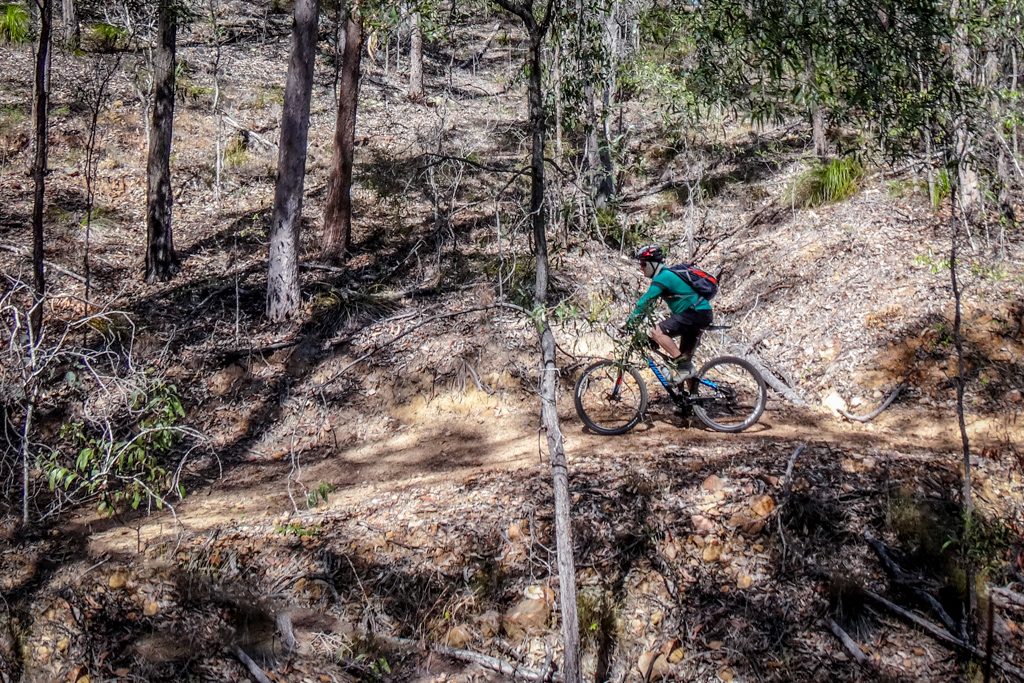 We climbed for a couple of kilometres but didn’t notice it because of the easy gradient.

At the top of the hill we rolled down “Surefoot Track” for a couple of kilometres.

Last time here we had ridden up it.  Today we whipped down it, sliding around corners enjoying the rush like a bunch of ten year olds. 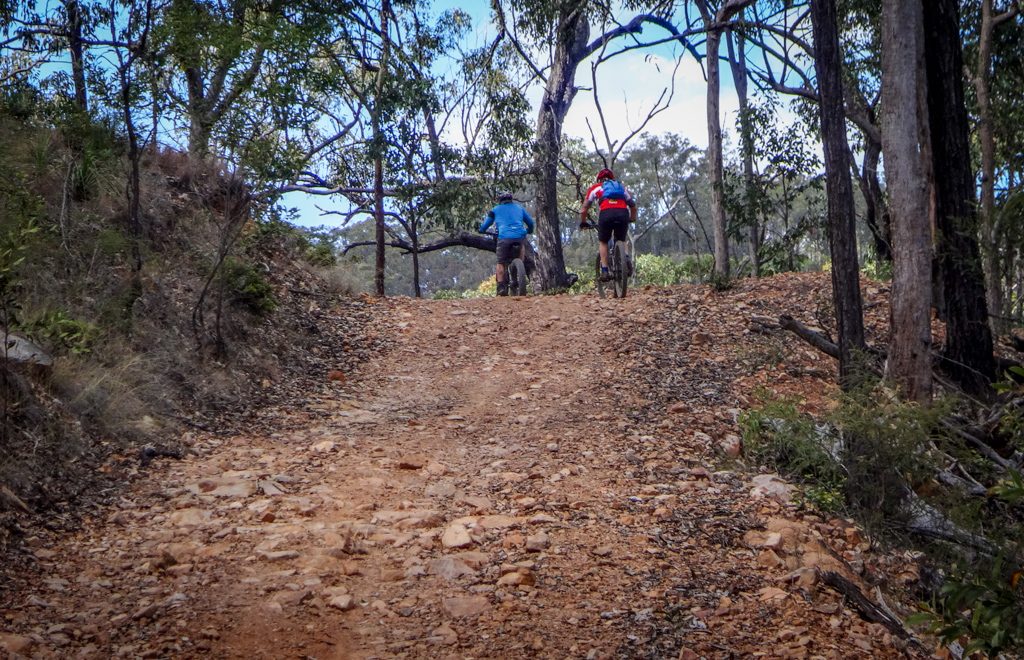 At this point we left the single-track loop and pointed the bikes towards the peaks of Spring Mountain.

The “1K Pull” track lived up to its name.  It was a slow, steep, uphill climb… 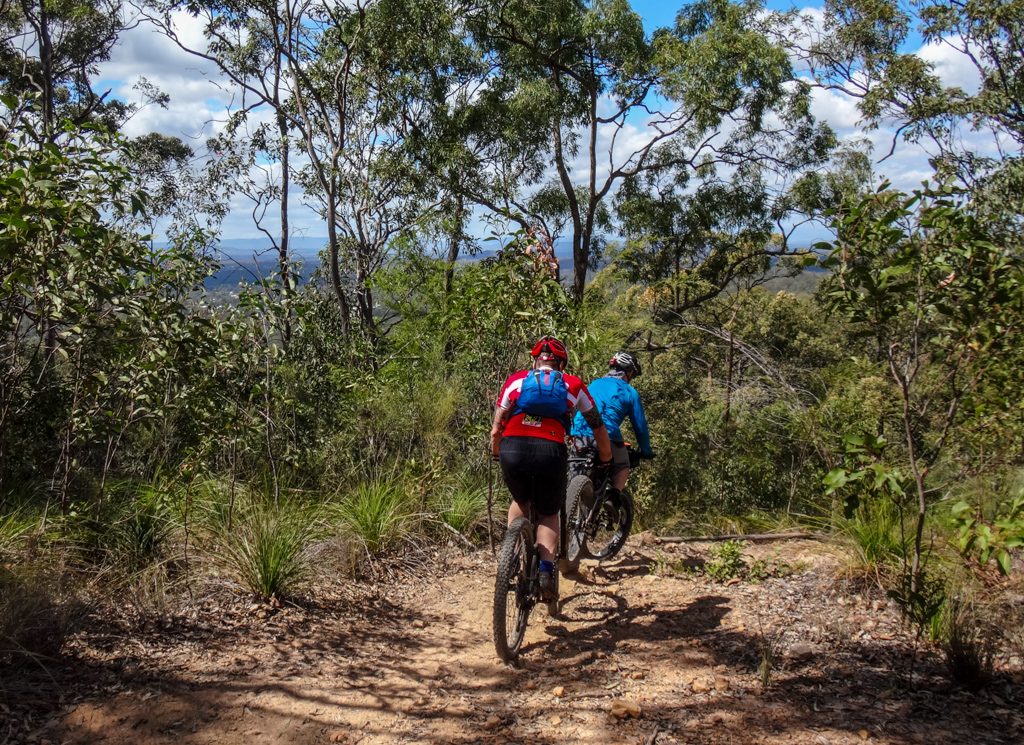 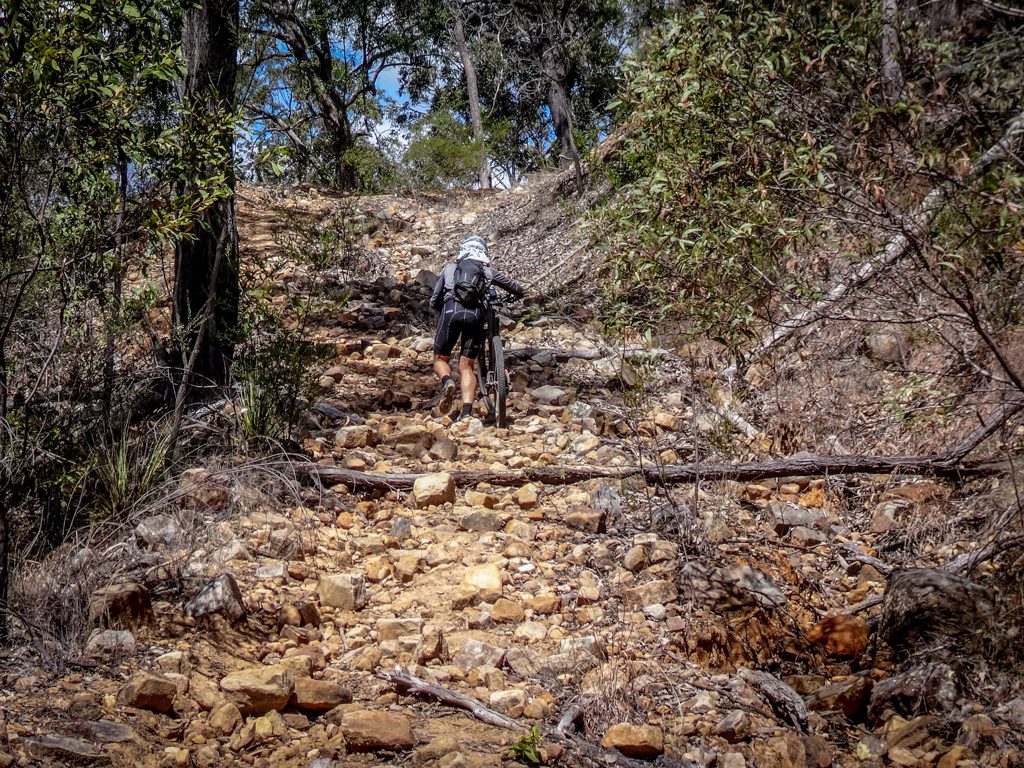 …but, for most of the next two or three kilometres it was a hard push.

The worst track was named “Despair”.

I think you’d have a difficult time on this one regardless of whether you were going up or down. 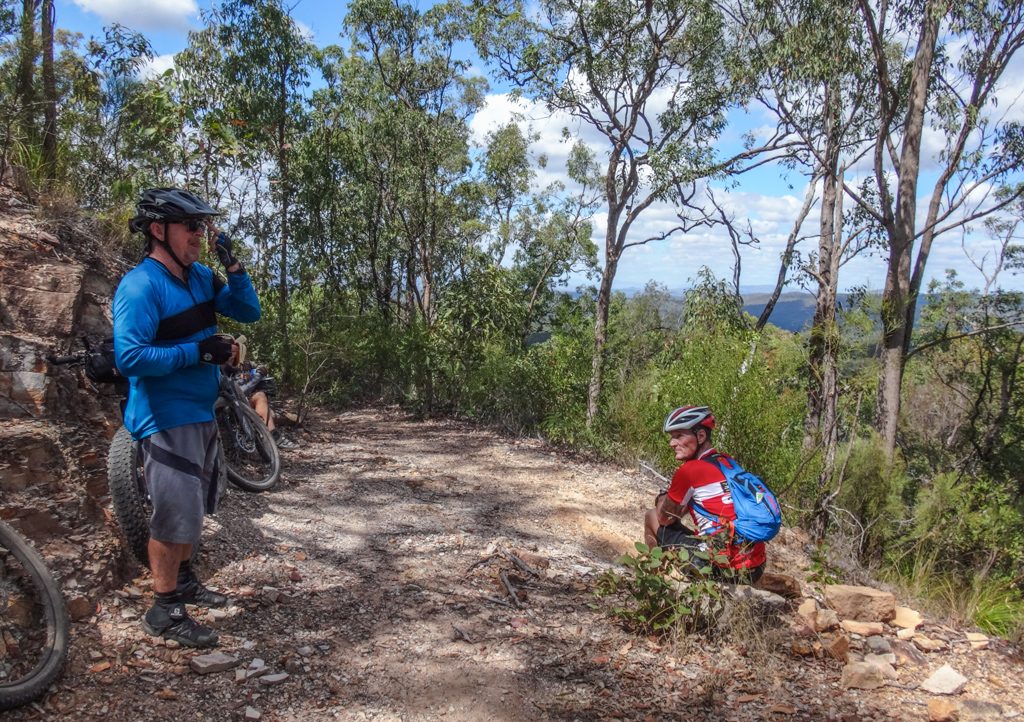 We survived “Despair”, and took a welcome break at the top of the hill.

Some of us sat and had a snack… 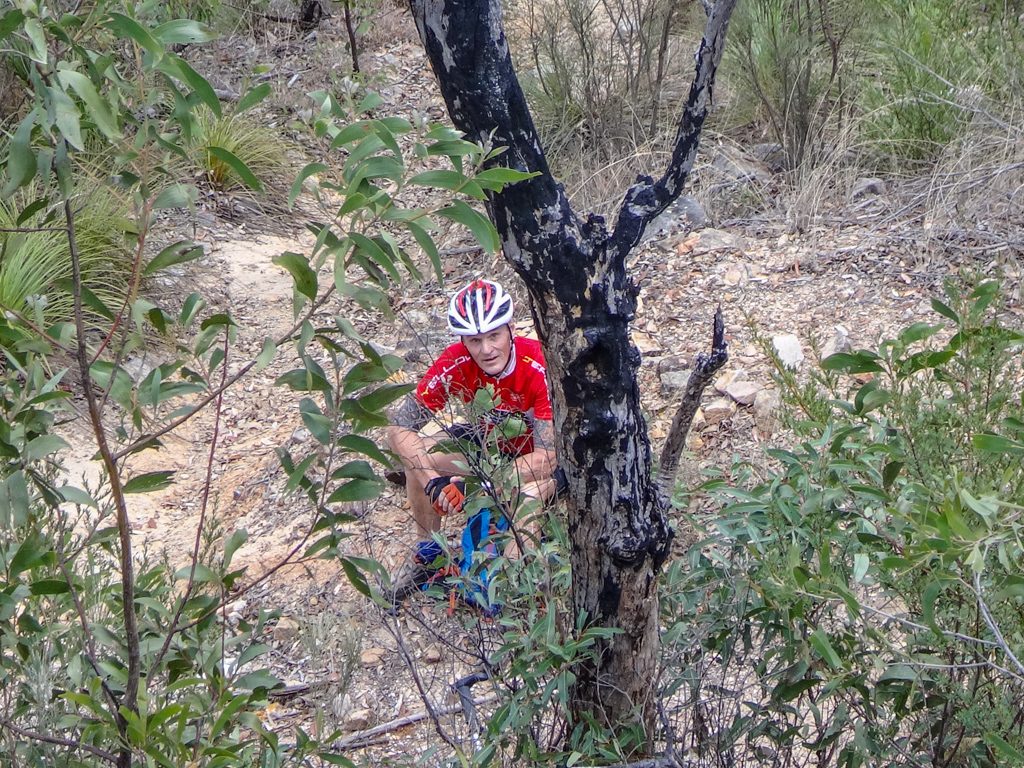 …some of us just sat.

Through the trees as we looked south, we could make out the peaks of Mount Lindesay, Mount Barney, Flinders Peak and Wilson’s Peak. 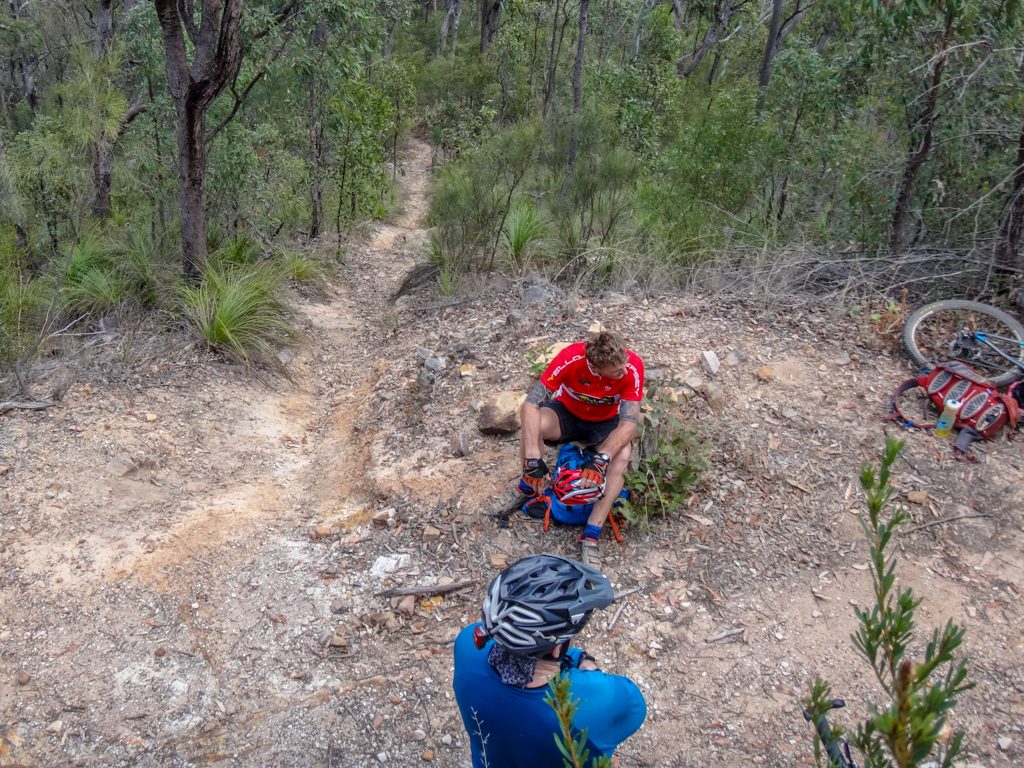 I looked down the hill at the steep rocky path below us.

“Don’t tell me we have to ride down that?” I asked out loud to no one in particular. 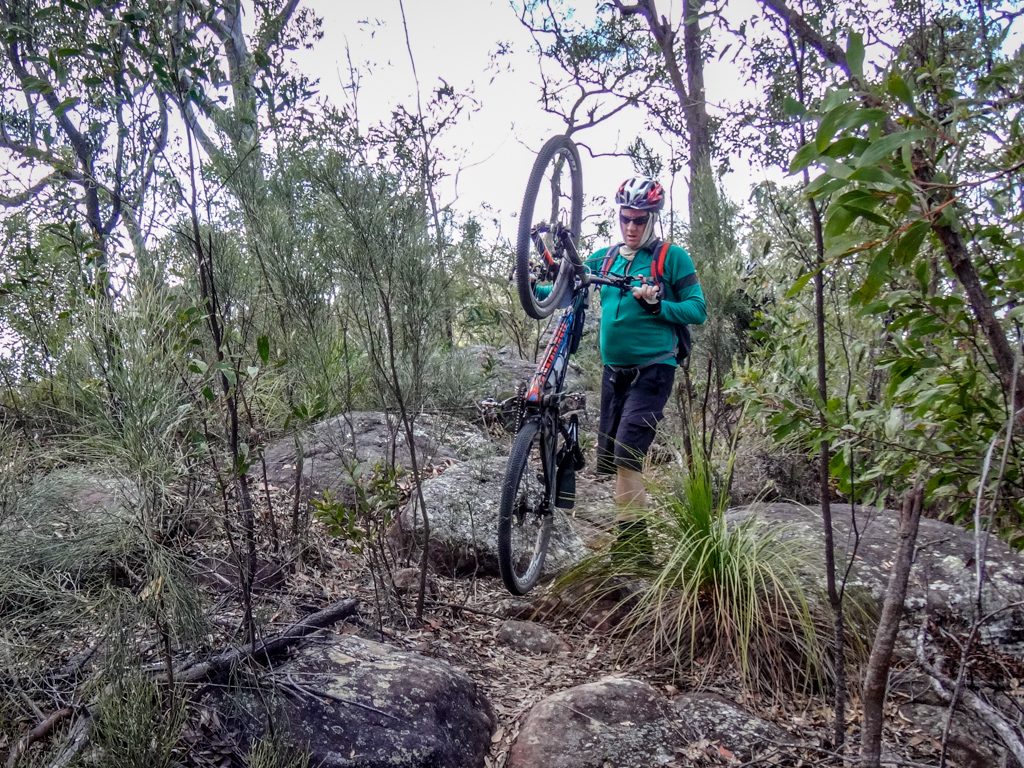 “Despair” track continued, up and down for another kilometre.

We had to push the bikes a while longer, gently lifting them over boulders. 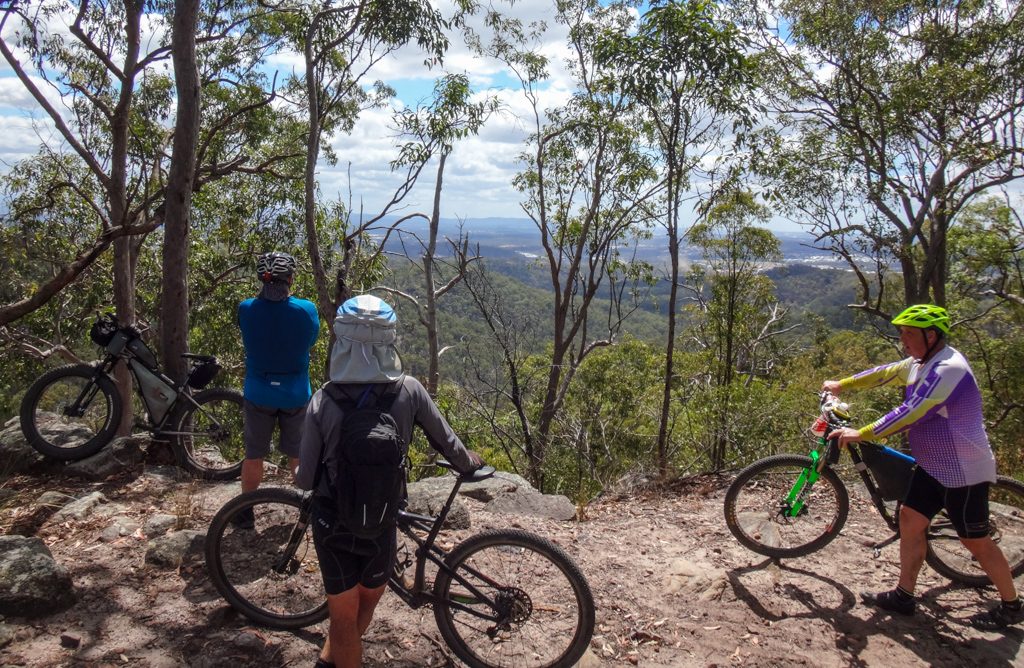 This rugged track ended at “Middle Peak” – a high point in the park with some great northerly views.

We could see all the way to the office towers of Brisbane’s CBD. 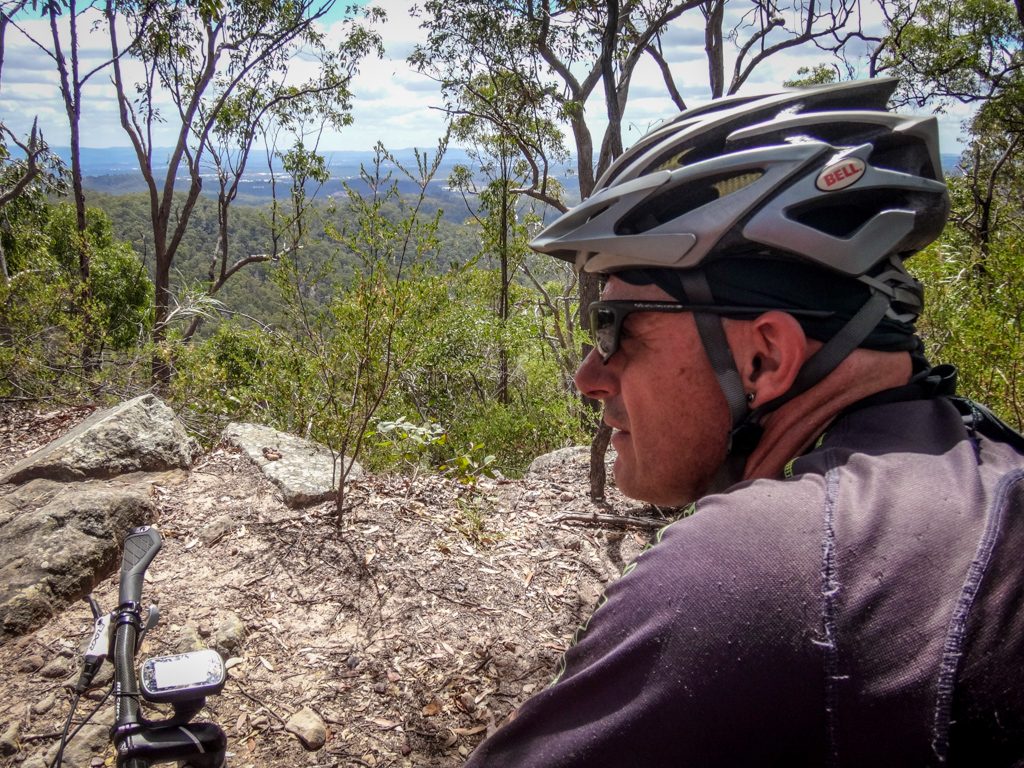 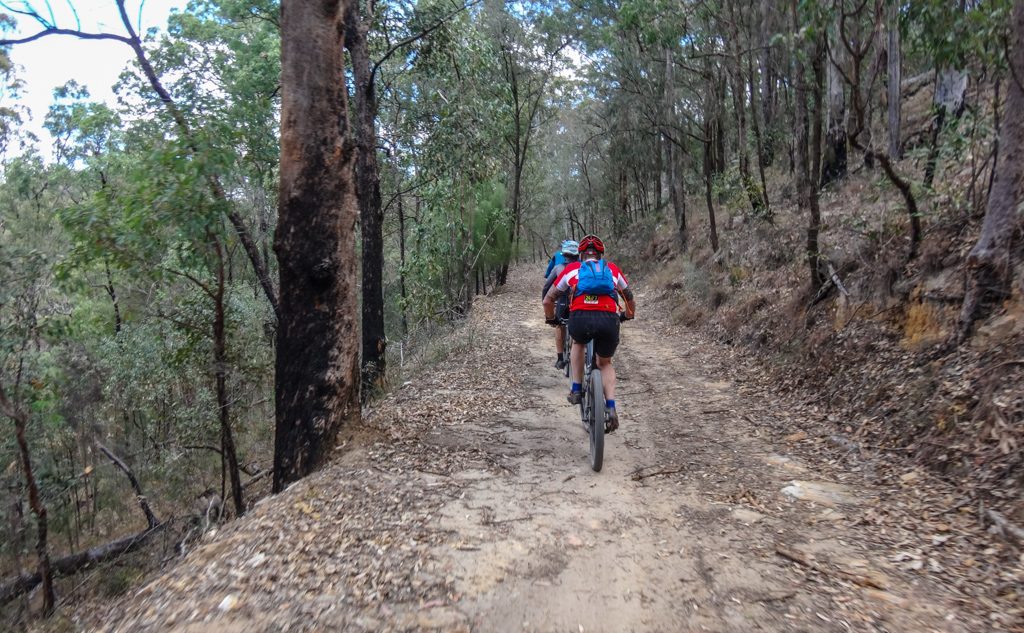 We left middle peak, relieved to be able to finally ride unhindered down the hill. 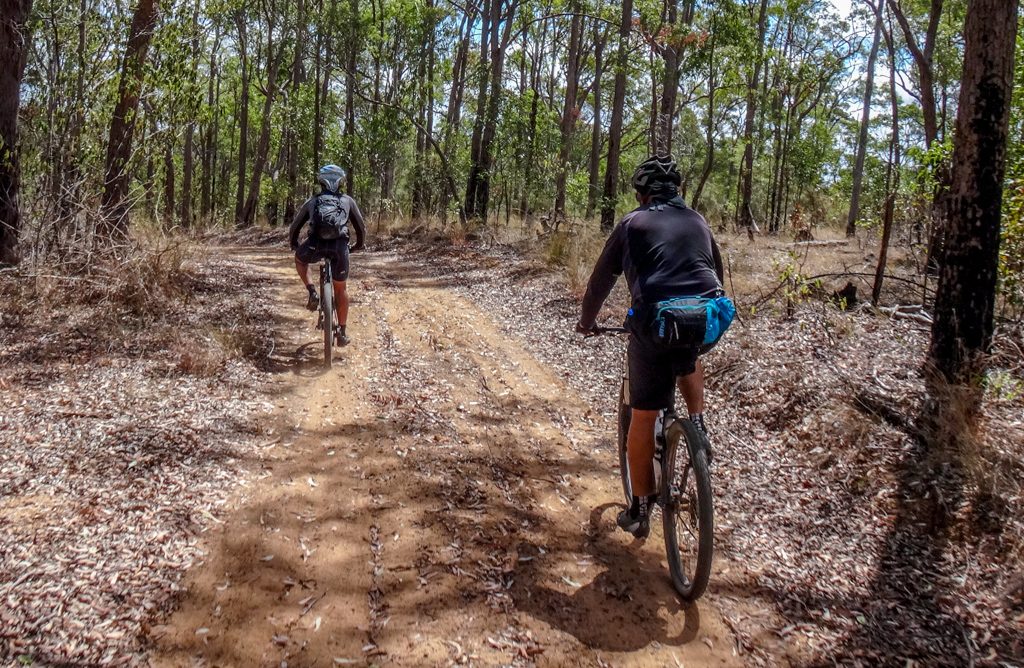 It was an easy descent as we rolled the last couple of kilometres down to the White Rock car park. 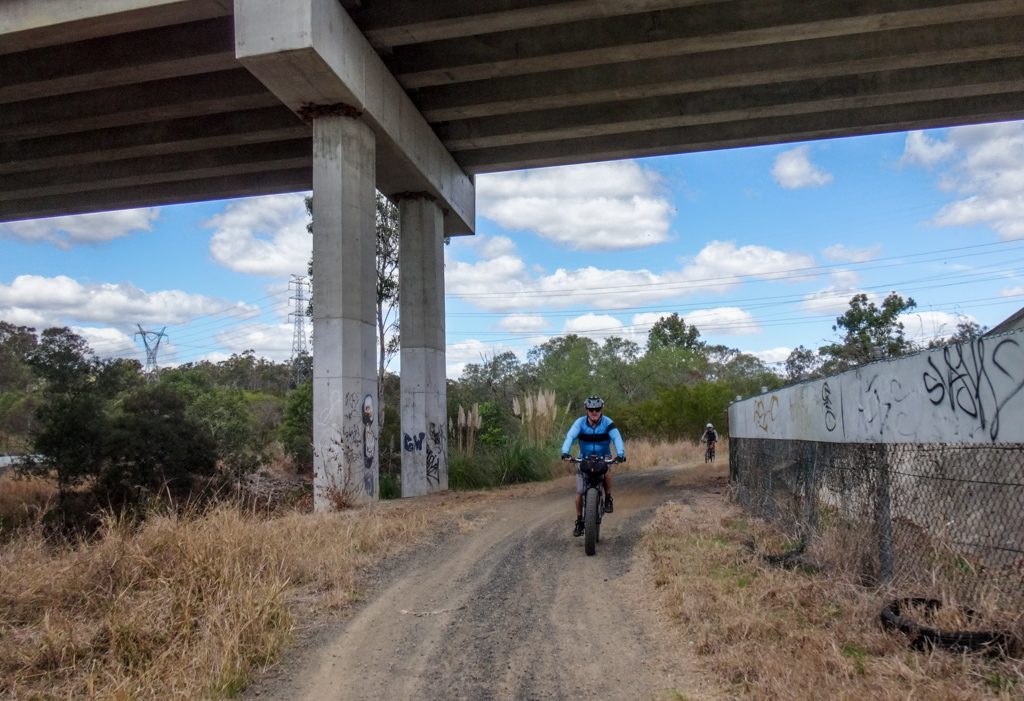 For the final stage of our ride we needed to find our way from White Rock to Redbank Railway station.

Any mountain biker worth their salt would rather ride on dirt than pavement, so we avoided the nearby suburban streets, and followed some  dirt tracks past the freeway and under the power lines. 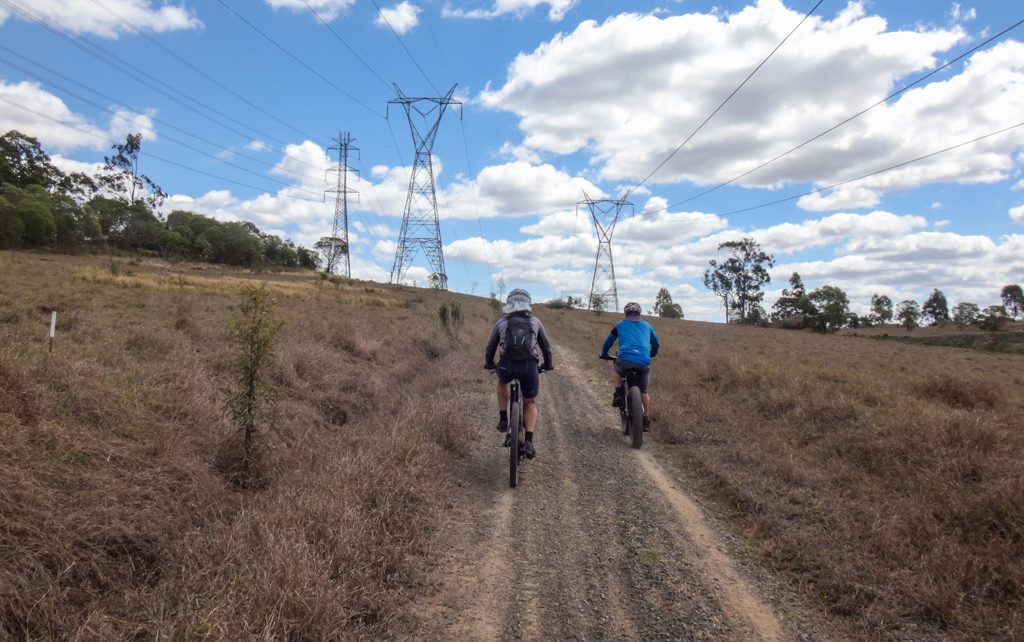 A couple of times I lost sight of the track as the guys in front of me kicked up thick clouds of dust, but this was a surprisingly fun track to ride. 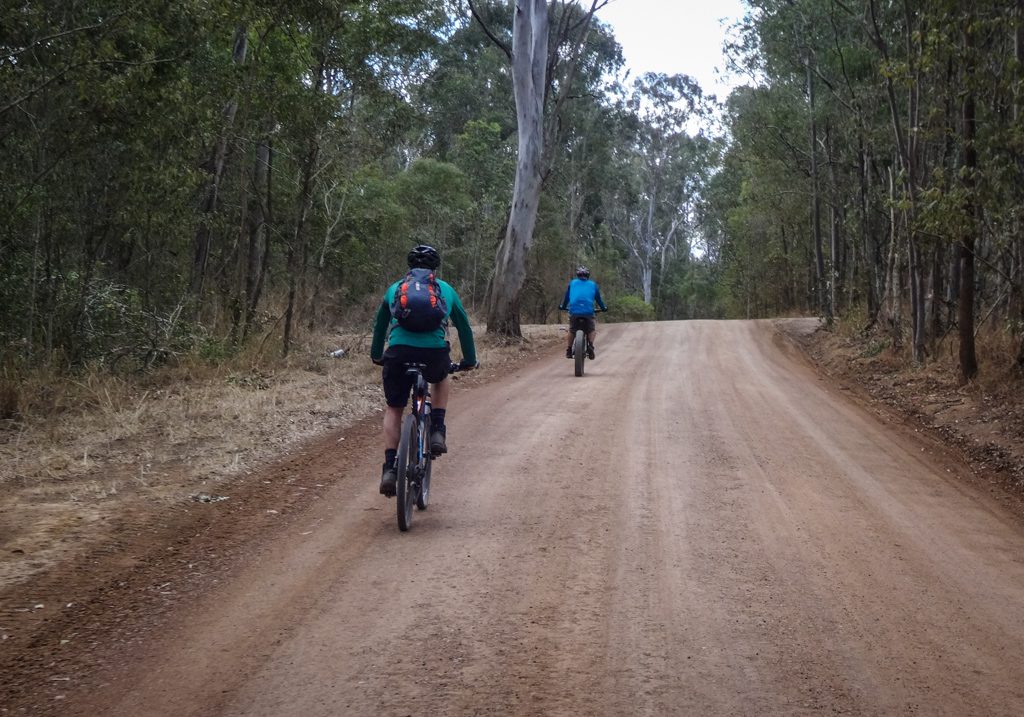 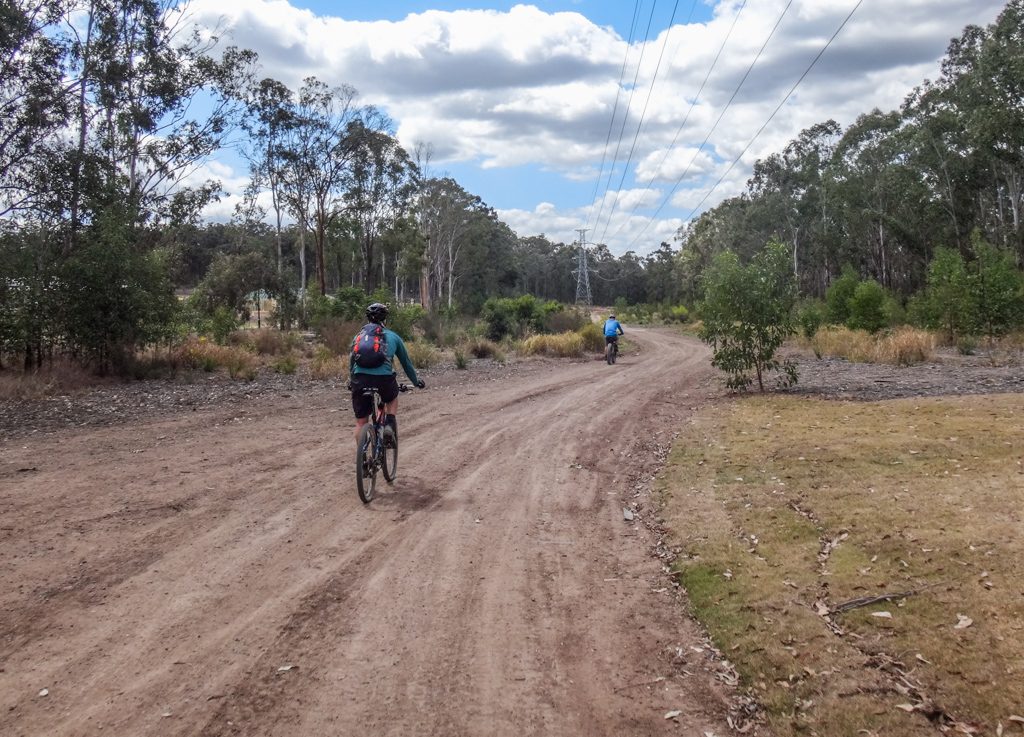 …and then to more powerline tracks. 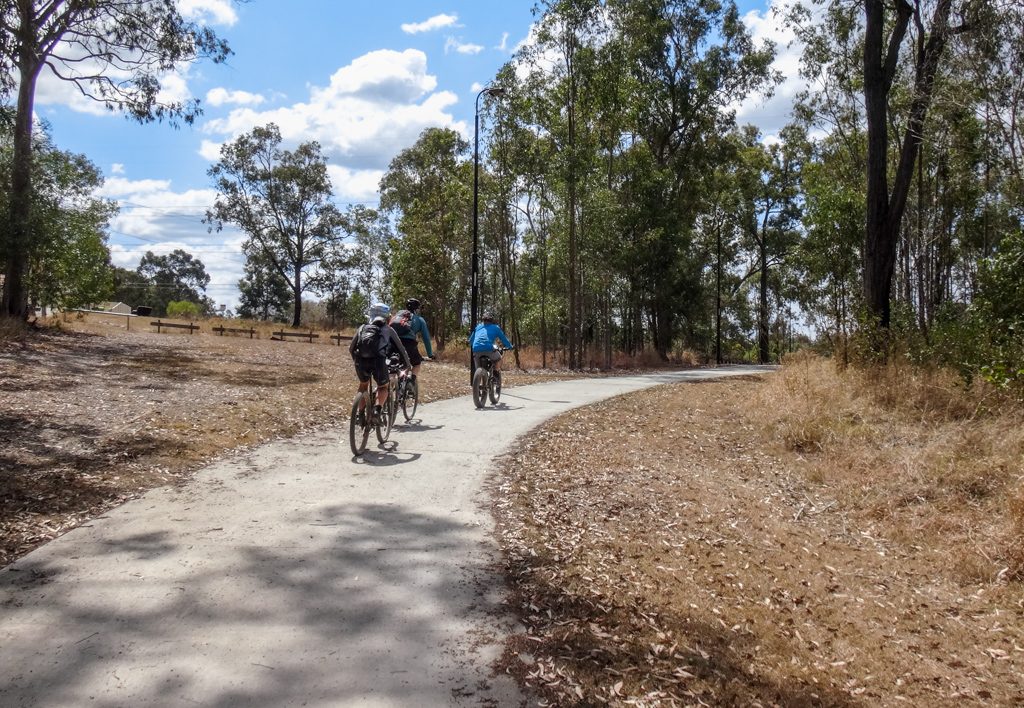 I was surprised how much of the final part of our ride we were able to complete “off-road”.

We rode almost forty kilometres in four and a half hours.

During that time we climbed about 1,300 metres in elevation, and I burned about 2,000 kcal.

Because of the steep rough hike-a-bike sections, I’ll rate this one 9 out of 10 on the tough-o-meter.

Thanks to Eric, Darb, Simon, Adam, Paul and Steve for a challenging, but fun day out. 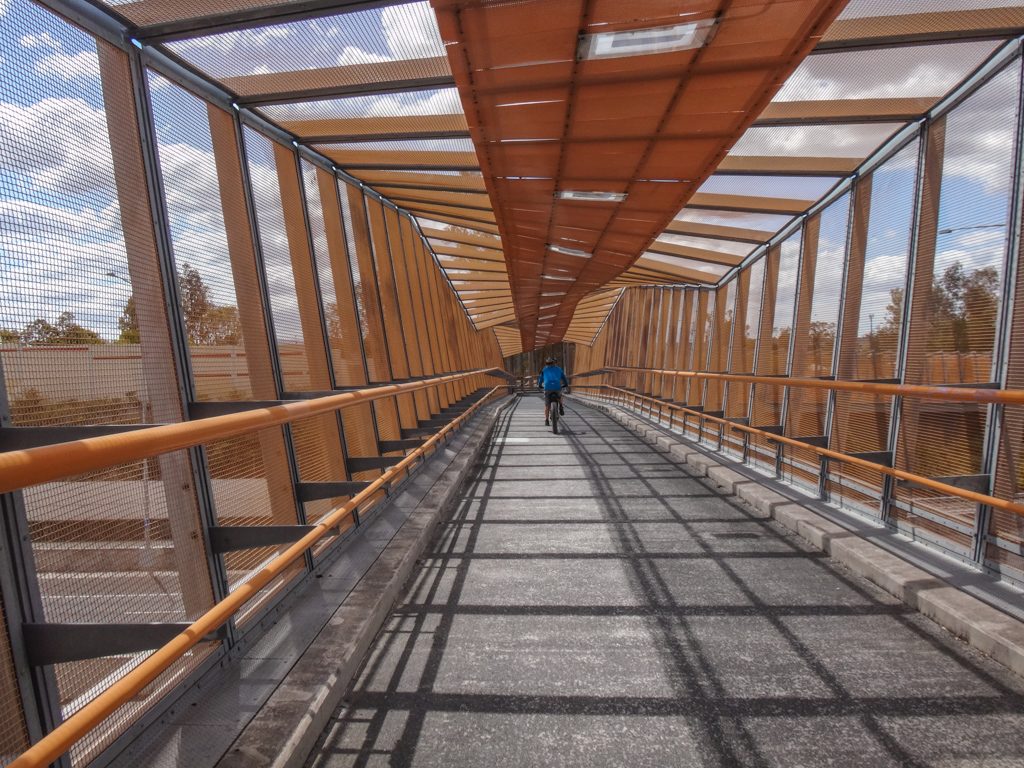 One Reply to “Spring Mountain”