While the shortest way between two points is a straight line, it’s sometimes more fun to take the longer, rougher way. 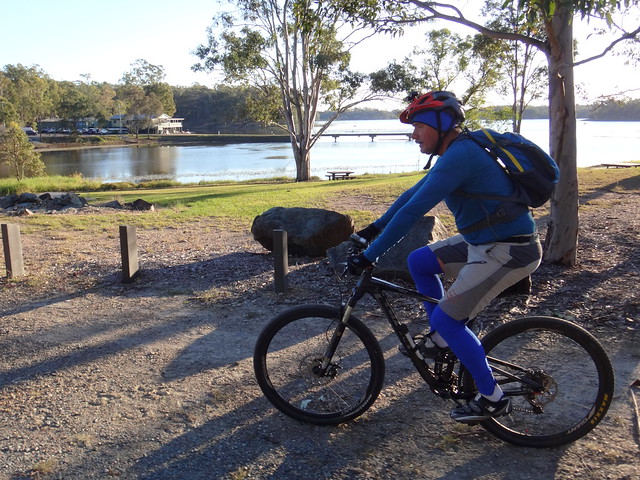 We had a family function in Wamuran that afternoon. Rather than do a short ride, I decided it would be more fun to ride there the long way with Eric and Mike. 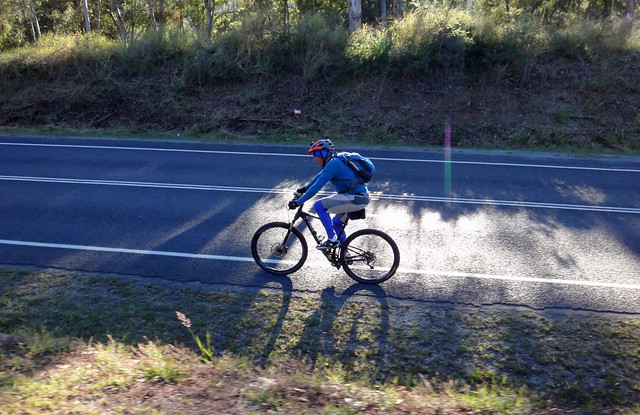 The first hour of the ride was along busy Dayboro Road. I don’t like riding on paved roads, but the plan was to endure this for an hour or so in order to ride through the Mount Mee section of D’Aguilar National Park. 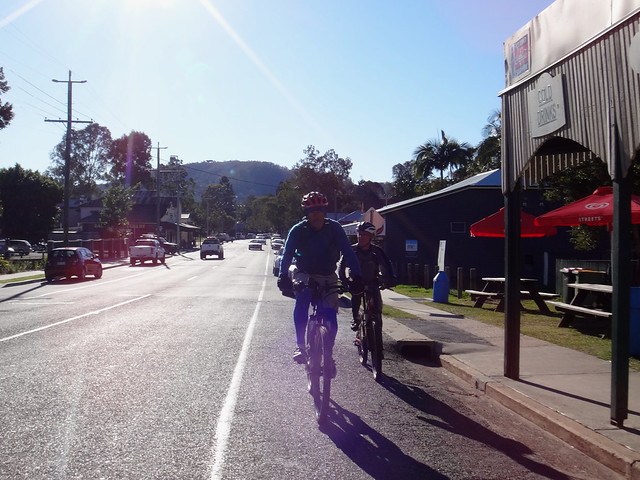 After a quick snack in Dayboro, we pointed our bikes to the north-west and headed up into the national park. 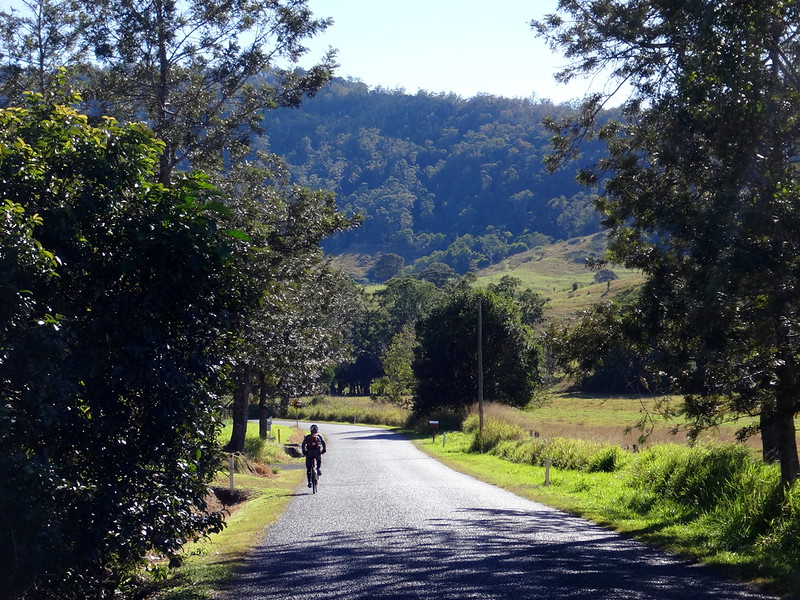 We followed the upper reaches of the North Pine River to its source in the hills around Mount Brisbane. 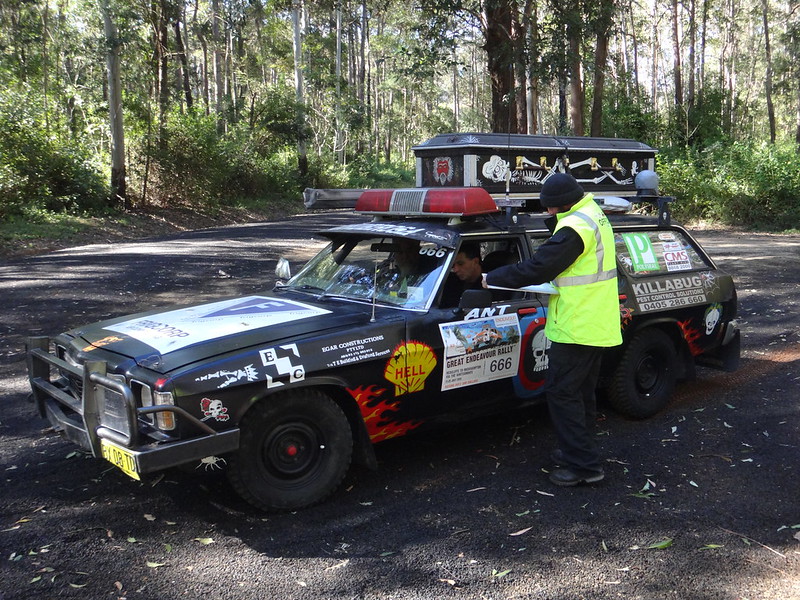 Unbeknown to us, the Great Endeavour Rally with about 80 cars, had also decided to come this way. So we shared the track with some odd-looking vehicles: some with coffins on top, flashing lights, sirens, and happy looking drivers. 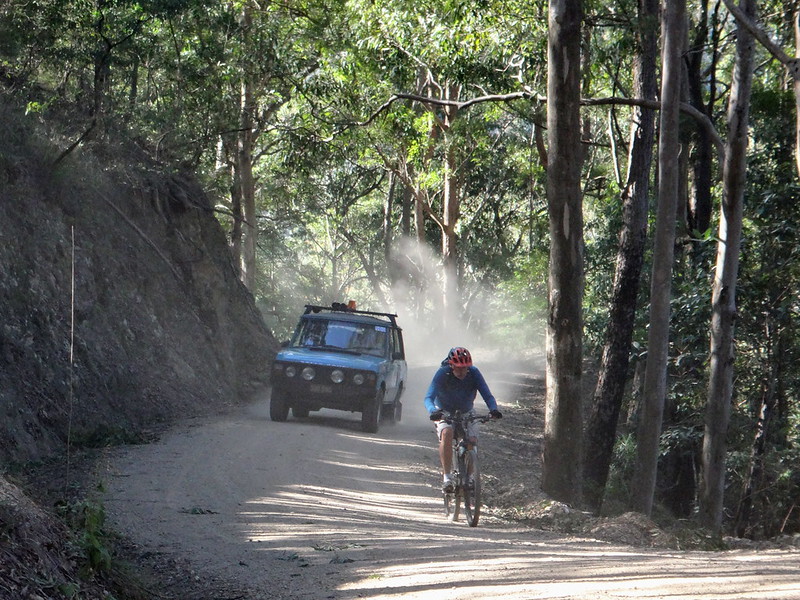 I’ve done the steep climb up Chambers Road before, but never with so many cars. Thankfully, they were all considerate, and gave us wide berth as we slowly ground up the hill. 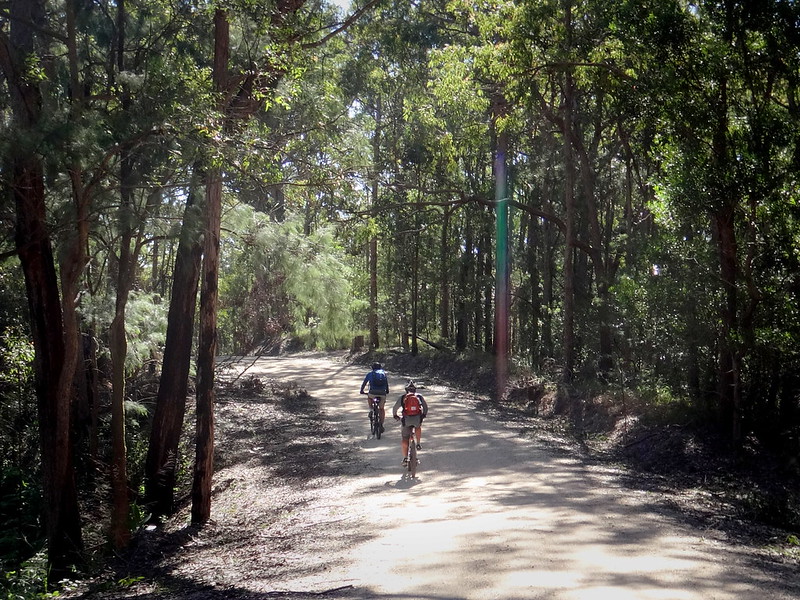 All the cars passed us by the time we reached Peggs Road, and we had the track to ourselves. 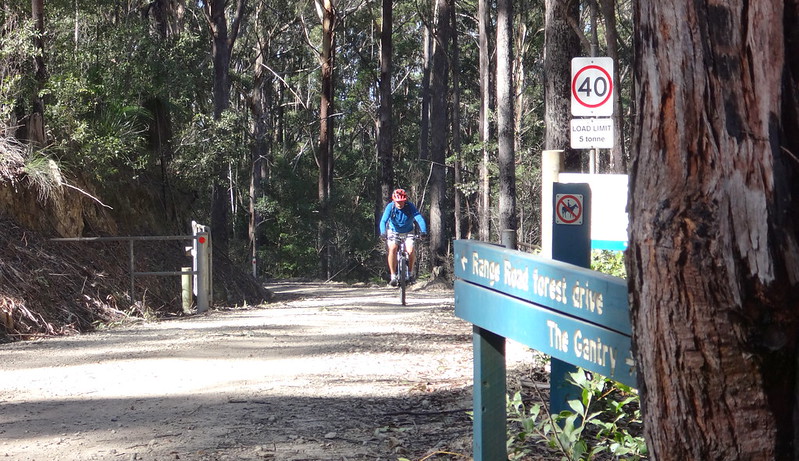 The climb from the top of Mount Brisbane Road to the Gantry is a tough one, rising over 600 meters in about 8km. It twists through some pretty forests, and over a picturesque creek. We were glad to reach the top. 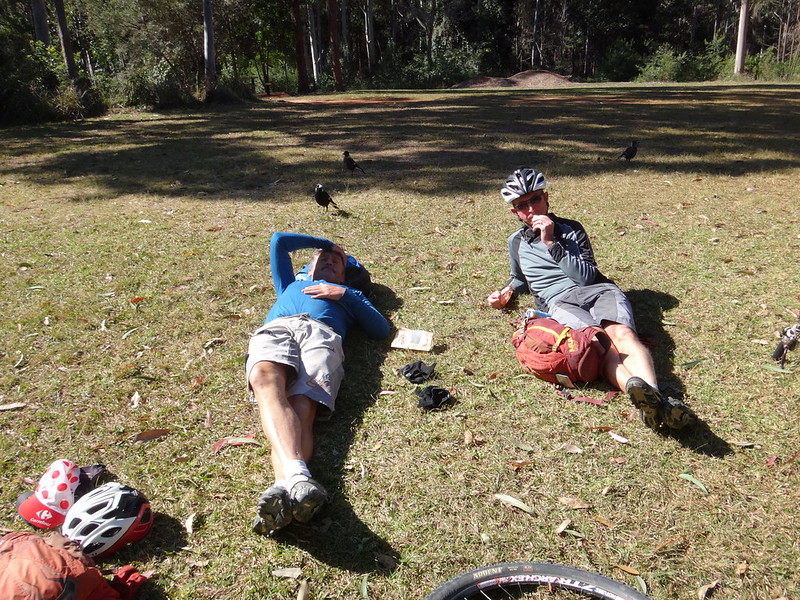 We took a break at the Gantry – part of an old timber mill which echoes the logging history of the area. 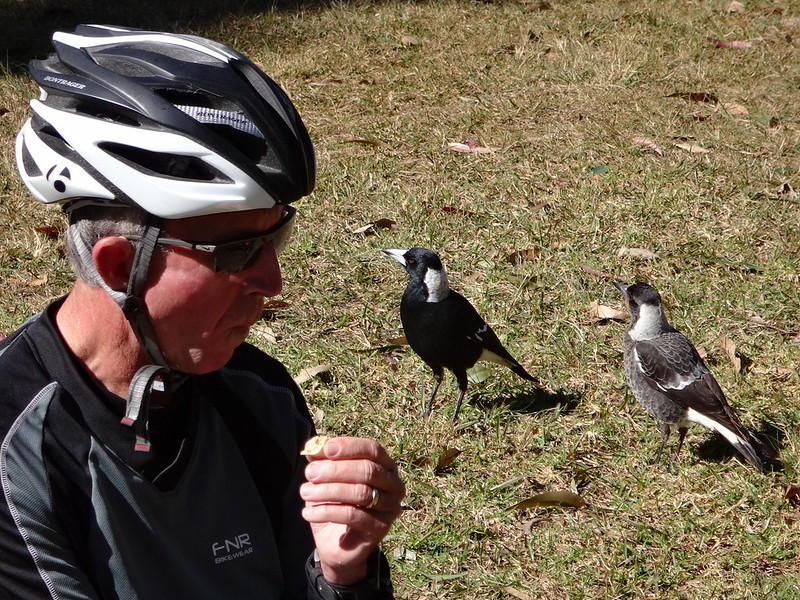 Eric got friendly with a couple of inquisitive magpies. 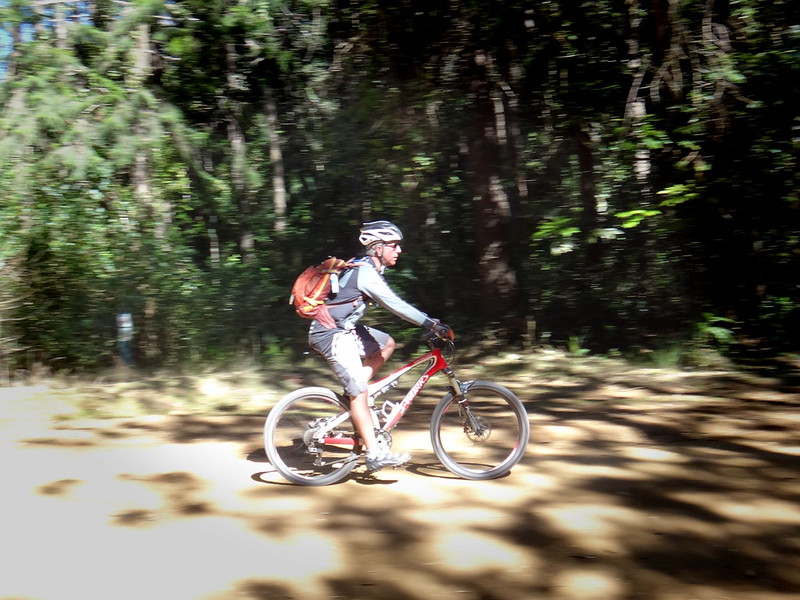 What followed was a wonderful long descent along Neurum Creek Road. The morning air stung as I zipped my jacket right up to my neck to keep warm. 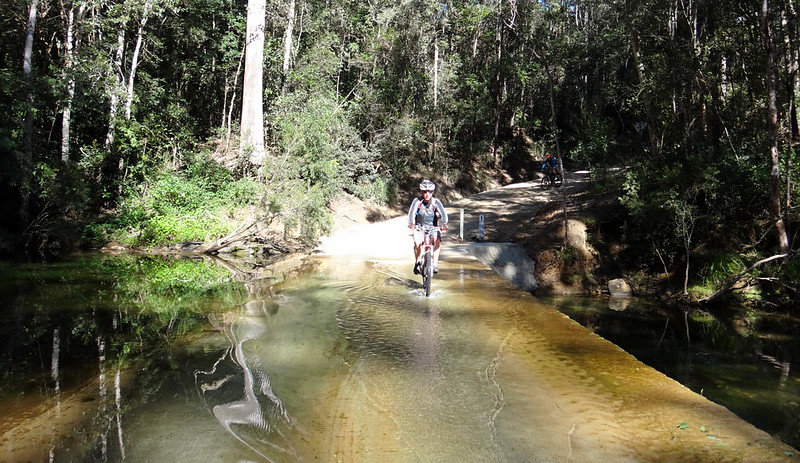 We crossed several sparkling creeks. As I listened to the rustling leaves and babbling water I was glad we’d taken the long-way round, even if it meant a short stint on a busy road earlier in the day.

We took a short stop at Rocky Hole. In summer this place is busy with swimmers splashing in the crystal clear water. Today it was too cold.

It seemed odd to me that the water could be so clear, and yet so green at the same time. 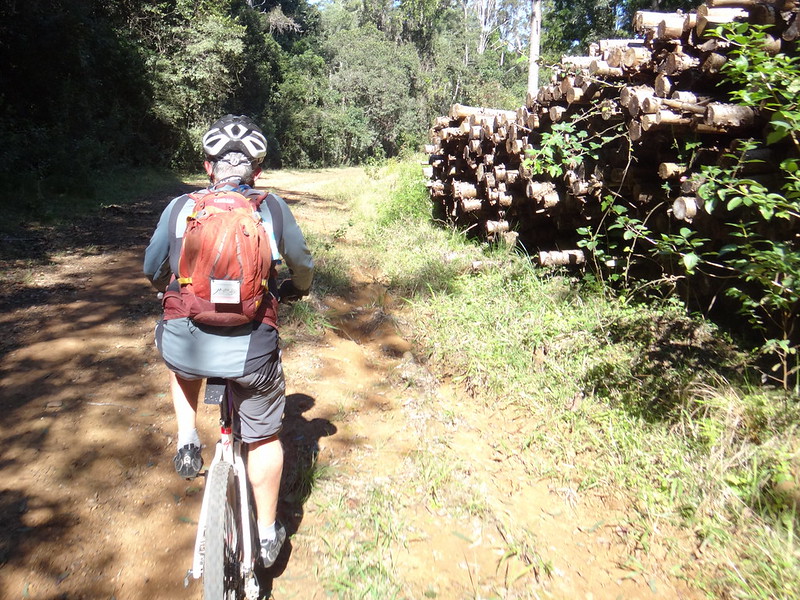 After the rocky hole, our course turned eastwards along Nine-V Road. This logging road involved yet another long climb as we made our way from Neurum Creek back up to the Mount Mee plateau. 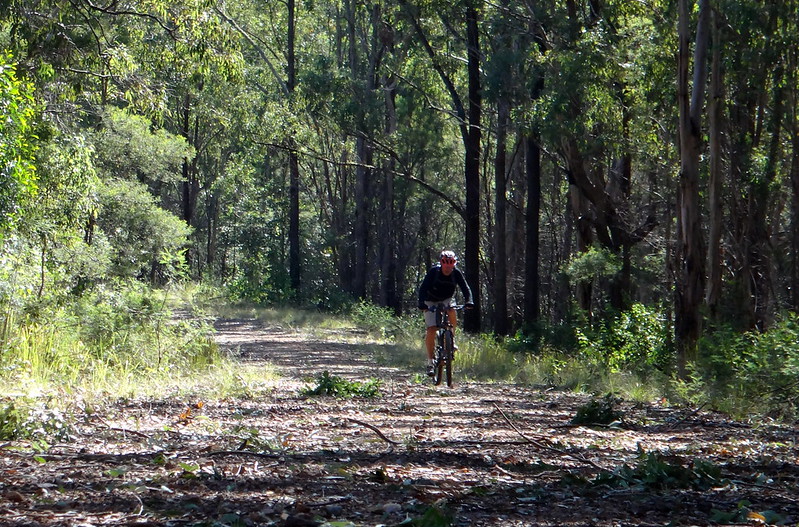 It’s a long way to the top. 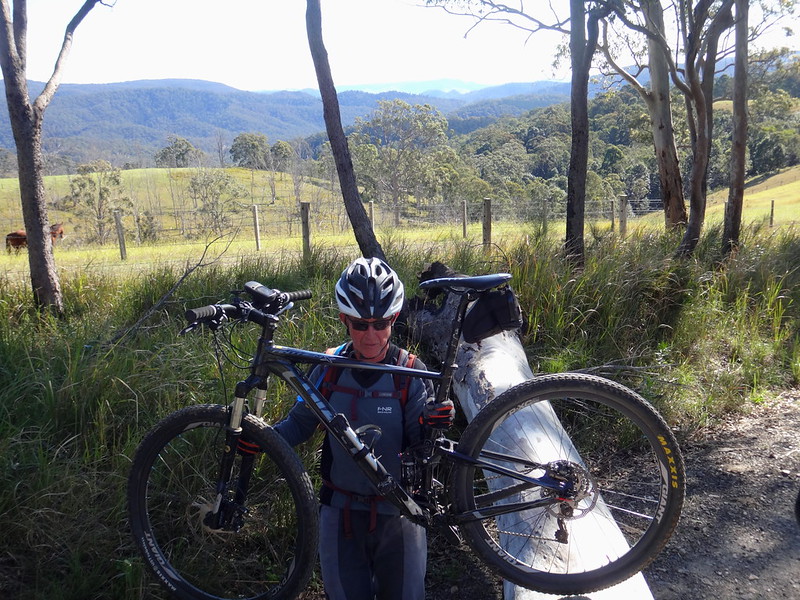 A fallen tree blocked the road, marking the top of the climb.

As I clambered over, I could see down the valley from which we had climbed out. While my eyes had been focused on the hill ahead, and my legs had been grinding the pedals, I had lost track of how far we had come, and how much we had climbed. It was impressive. 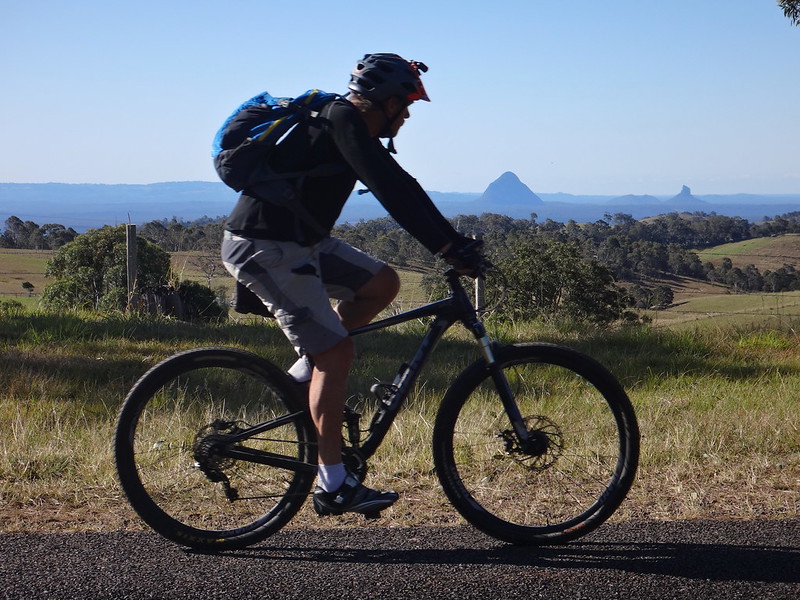 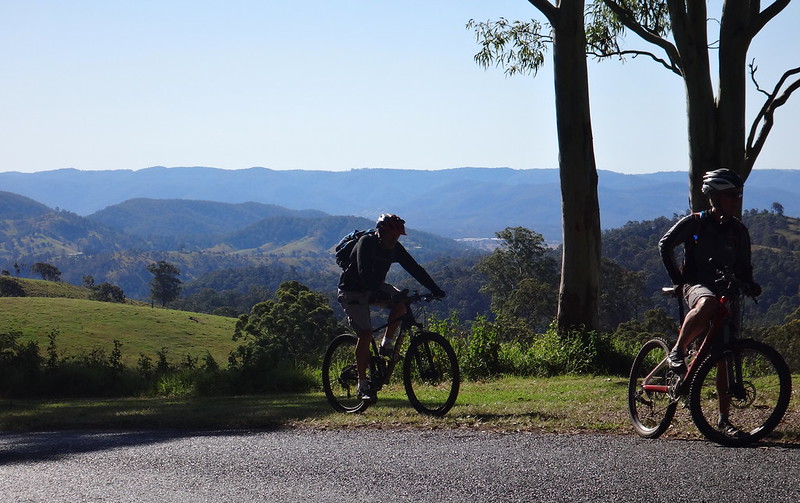 Up on the plateau, we could survey a wide arc from the Glasshouse Mountains around to the peaks of the D’Aguilar Range.

People who live up here are lucky to have these views every day. 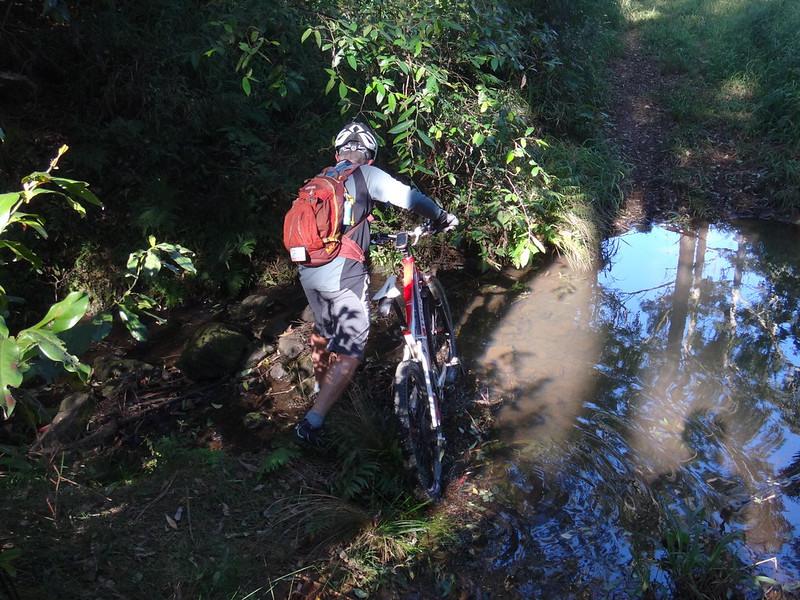 We followed an old road reserve along a fence-line. Sometimes these road reserves devolve into wild scrambles through weeds and boggy creeks. It’s then that my friends disparagingly talk about “Neil’s Road Reserves” as though I just make them up so I can enjoy watching people trying to traverse them.

Could I be that cruel? 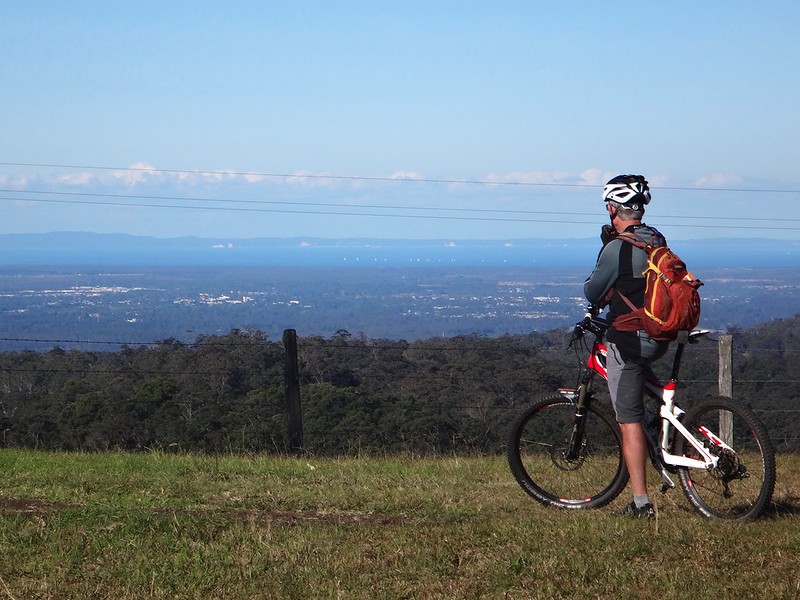 As we rolled down Pedwell Road, I was struck by the views of the Bay and Moreton Island.

Only last week I had stood on the shores of that island looking at the distant peaks of the D’Aguilar Range.

Now I was on the peaks of the D’Aguilar Range looking at the shores of Moreton Island.

Perspective is a wonderful thing. 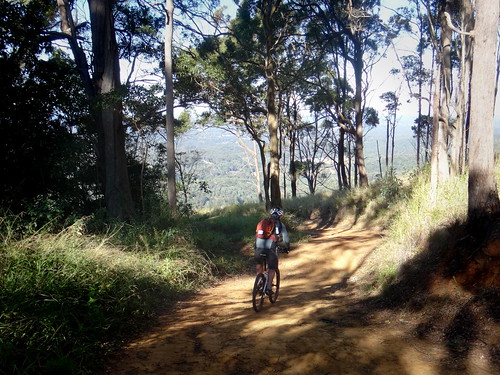 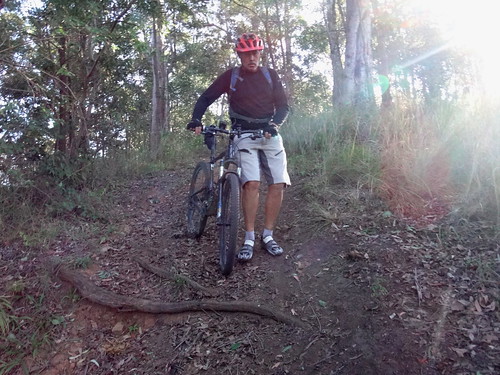 So we started the final descent of the day down Pedwell Road.

In some places it was fun to ride. In other places terrifying. I took the safe option a couple of times and walked some parts. 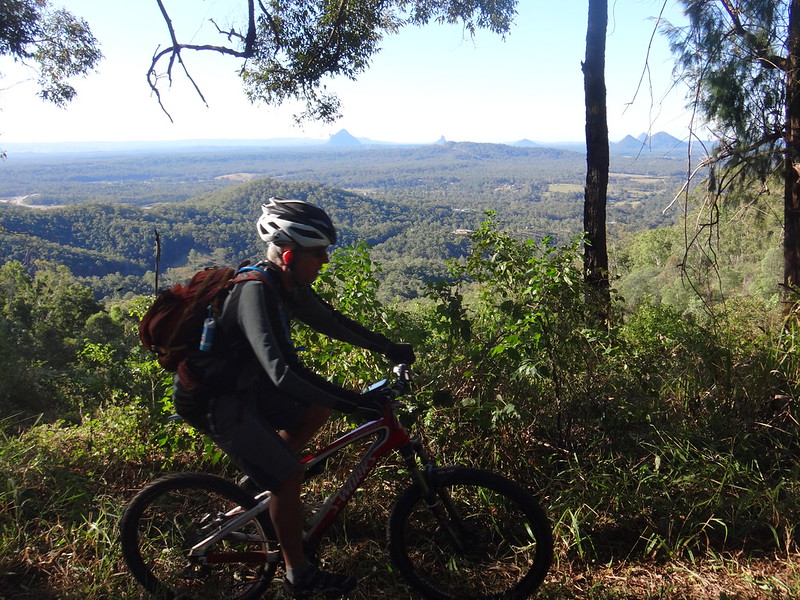 When we took few seconds break from concentrating on the track, we had some impressive views of the Glasshouse Mountains to the north. 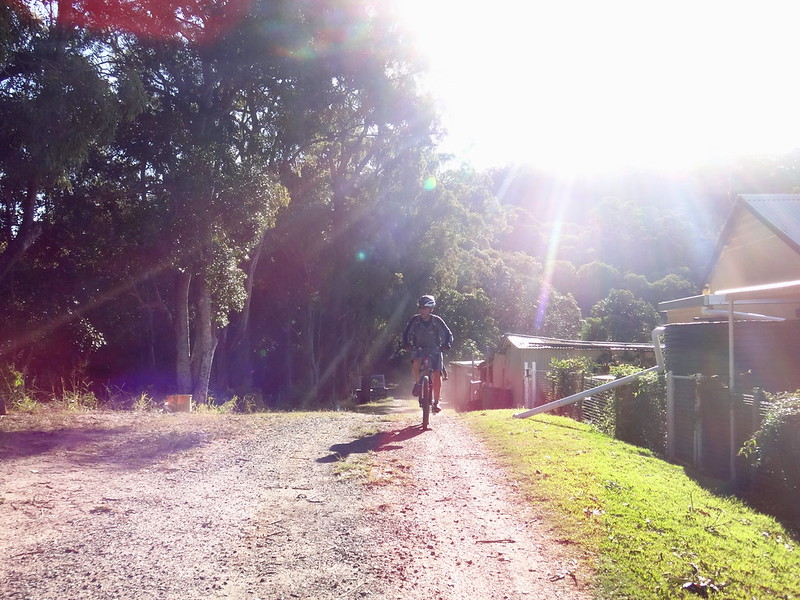 Eventually the treacherous track spat us out onto R.Williams Road. It’s a very steep gravel road, but easier to ride than the track we had been on. I silently heaved a sigh of relief. 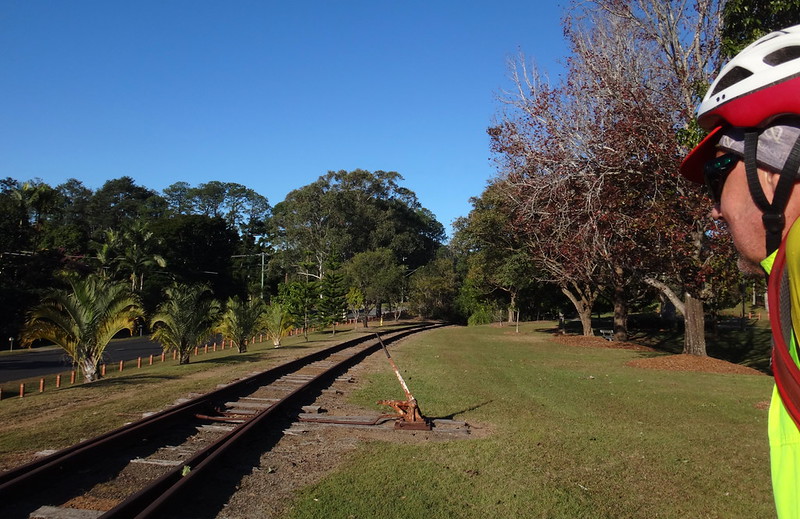 We followed the old railway line into Wamuran, where I said my goodbyes to Eric and Mike. They had arranged a lift home, while I rode on to meet my family just outside of town. 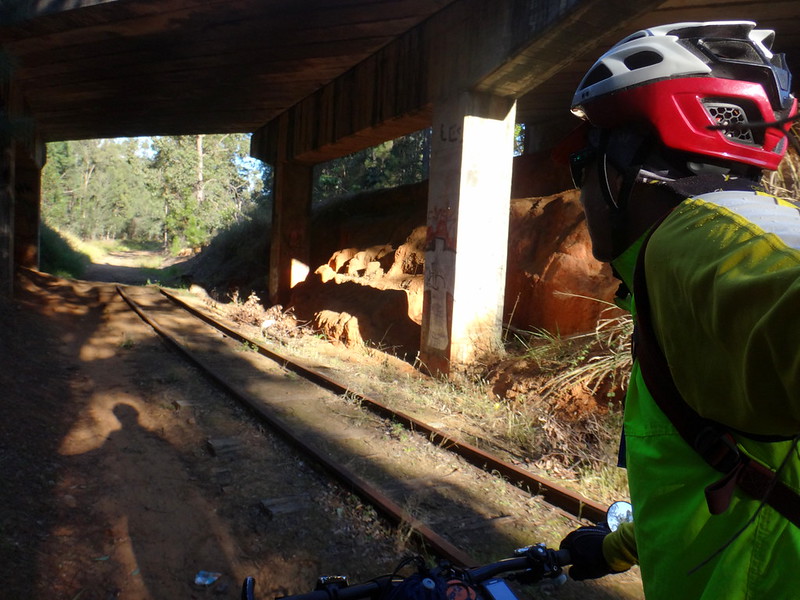 The old railway track took me almost to the front door of my destination. I was glad to be able to avoid the busy D’Aguilar Highway. 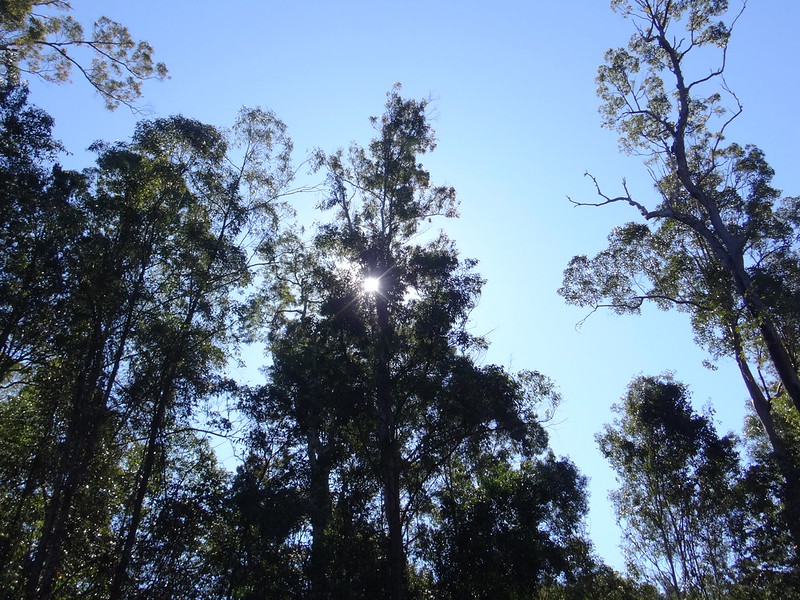 This was a huge ride, but well worth the effort.

Sometimes the “high road” is more difficult, but more rewarding.

We covered 80km in almost 9 hours, and climbed a whopping 2,050m in vertical ascent.

Considering the large amount of climbing involved, I’ll rate this ride 9 out of 10 on the tough-o-meter.

Thanks Eric and Mike for humoring my whim, and following this crazy track through mountainous terrain.

One Reply to “The High Road”