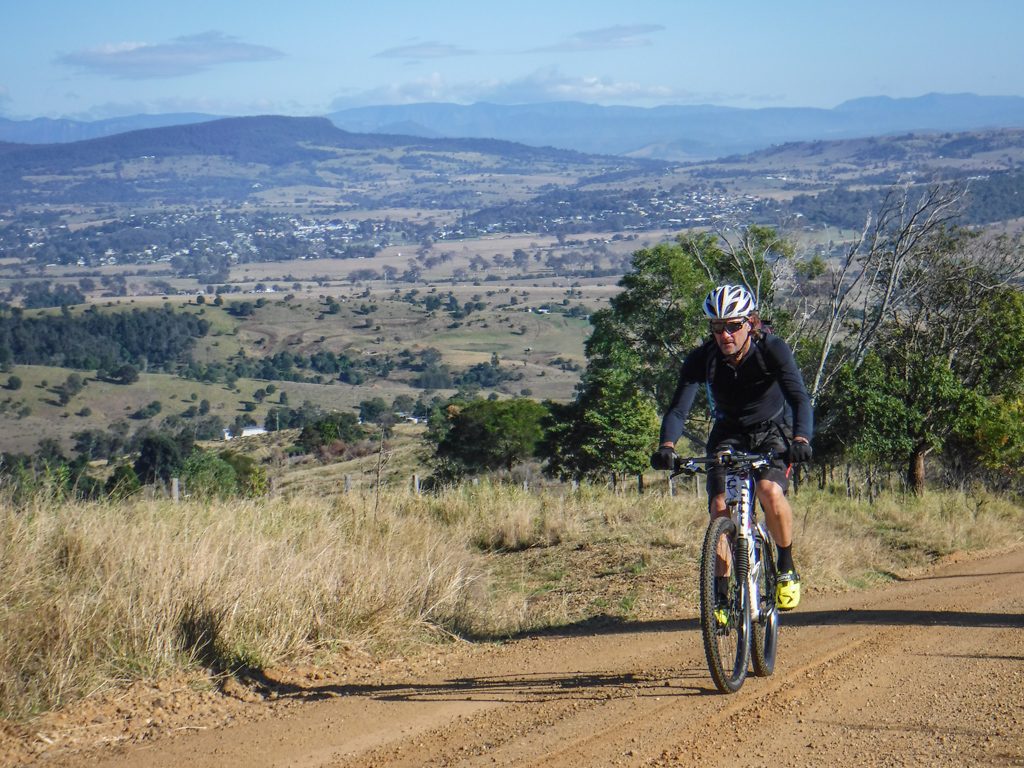 For the last few years I’ve wanted to find an off-road way to get from Boonah to Kooralbyn. Today we sought to answer that question. 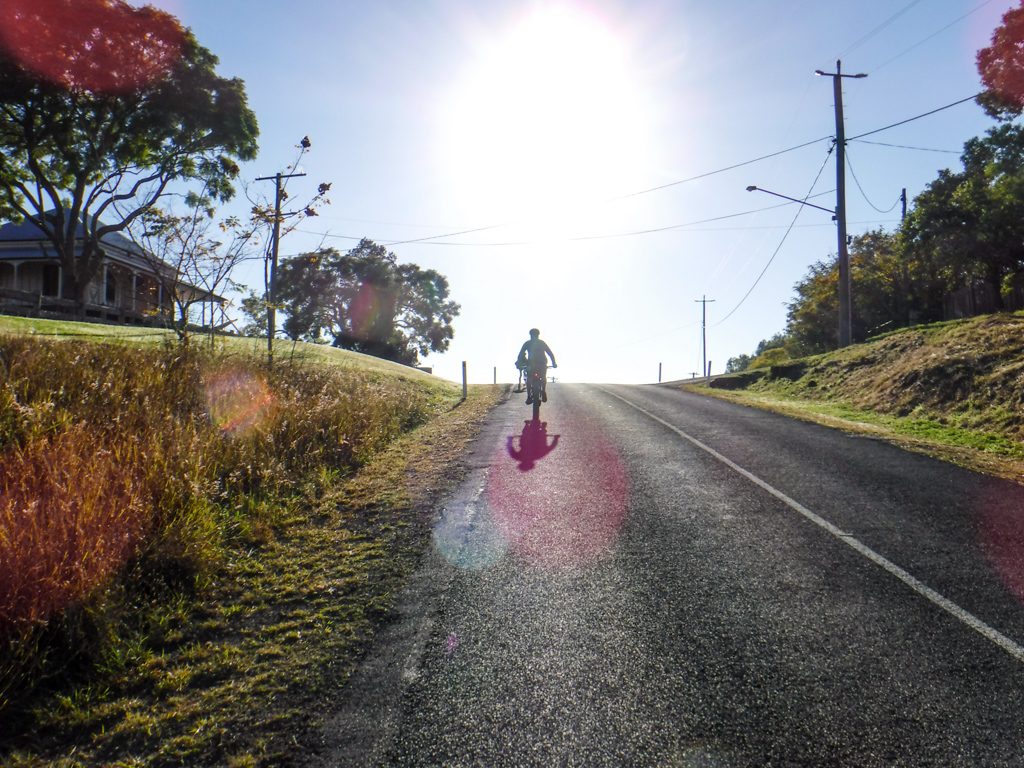 Boonah is beautiful in “winter”. We headed out of town under a clear blue sky and mild sun. In weather like this you can easily ride all day. 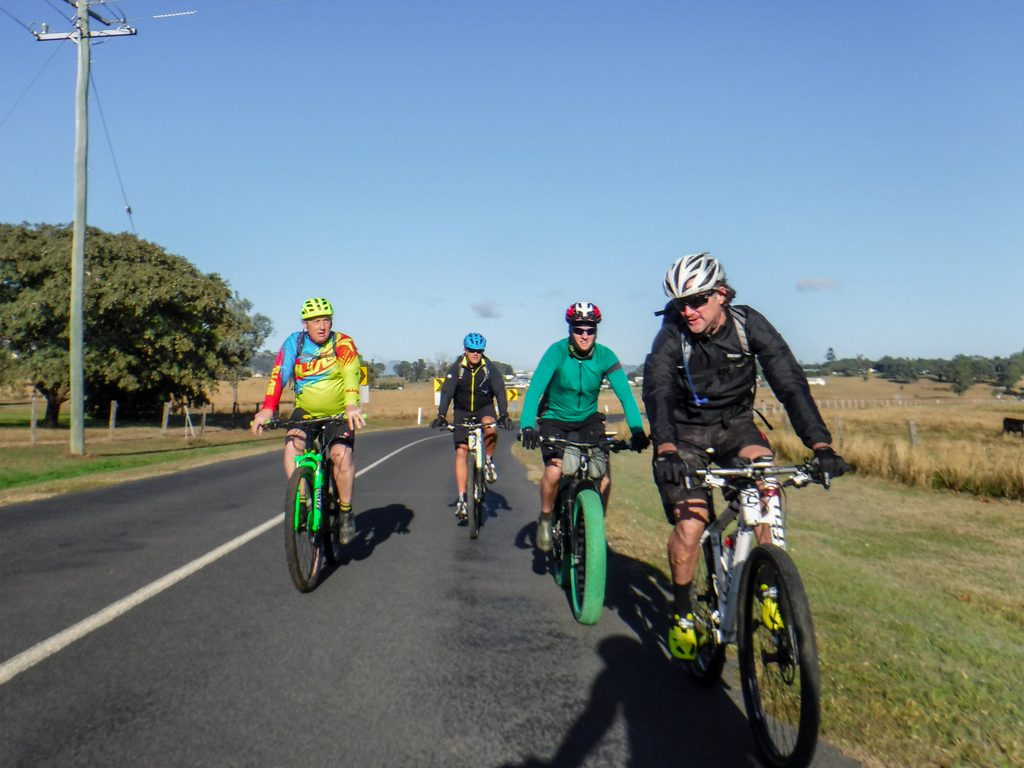 We had no time limits, except a vague desire to arrive back in town in time for a late lunch.

The flat paved road ended after a few kilometres as we neared the first big climb of the day. 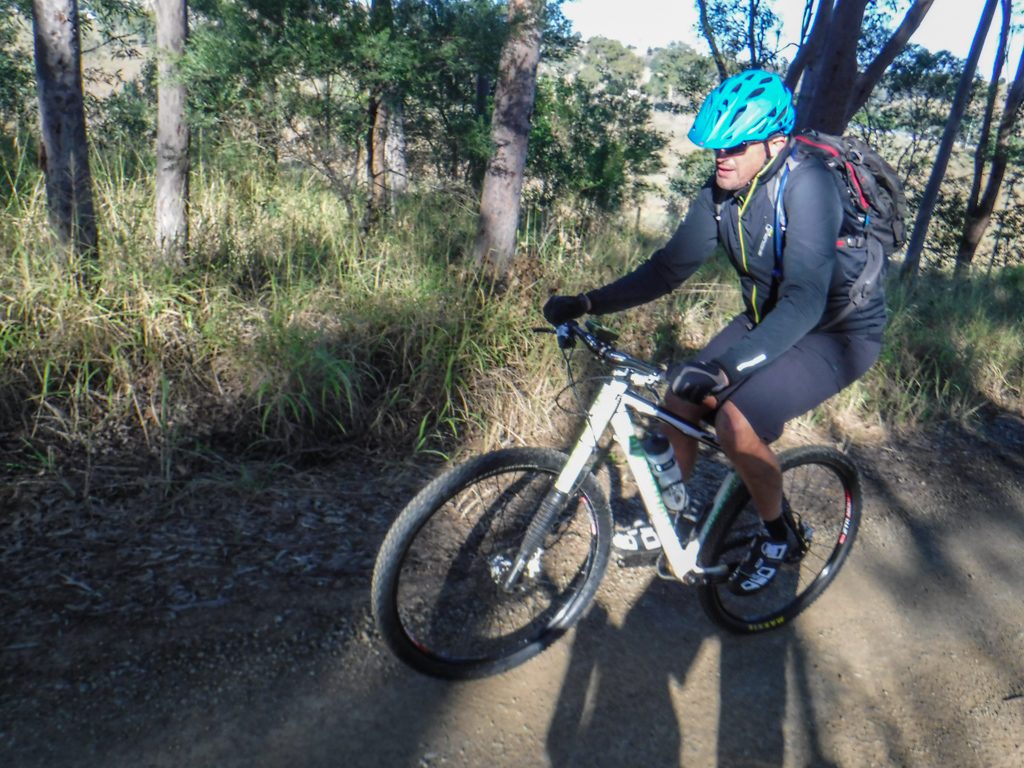 Except for a few quick descents, Geiger Road goes mostly upwards for about ten kilometres. We kicked back into granny gear and slowly spun our way to the top. 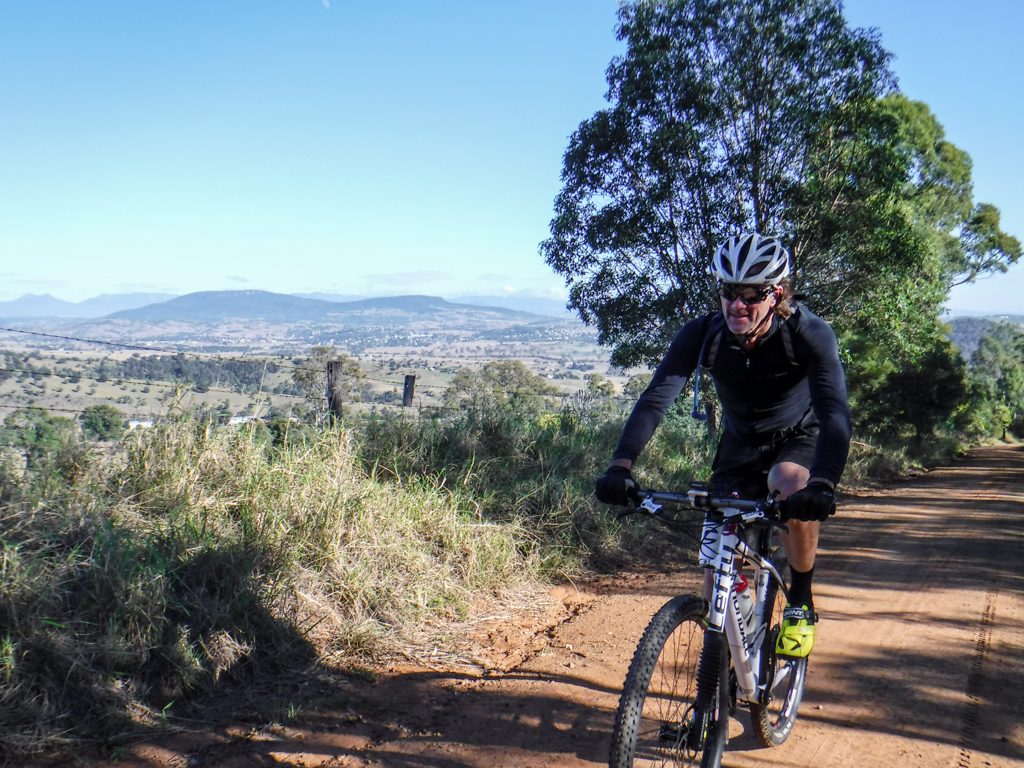 As we climbed, the rolling fields around Boonah slowly spread out below us. 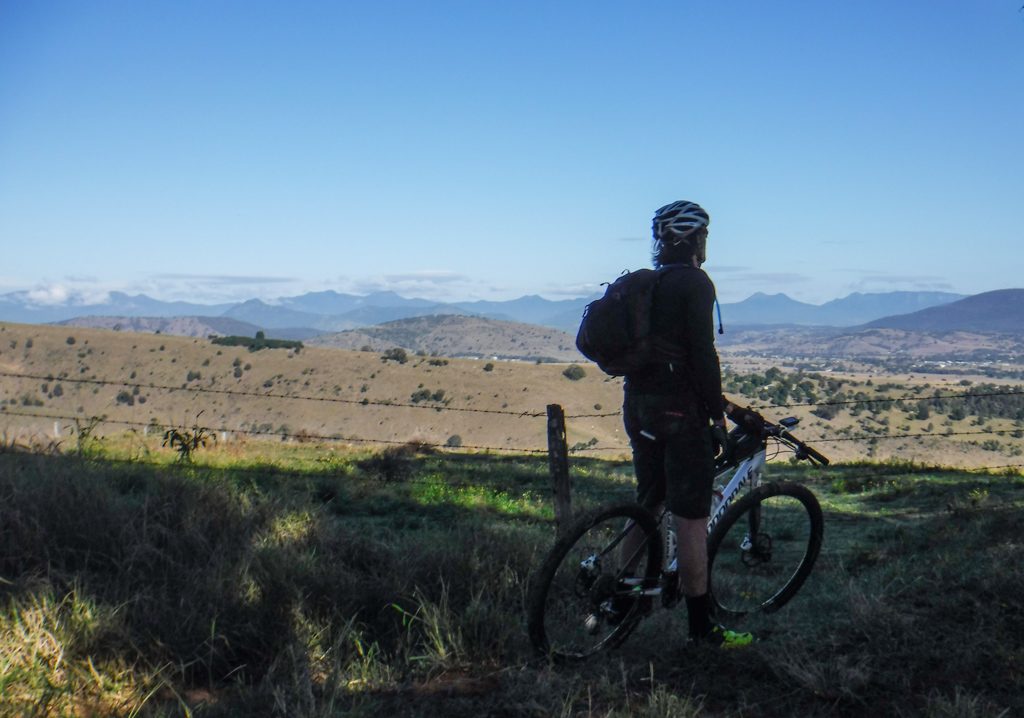 To the west, we could make out the jagged wall of the Great Dividing Range. 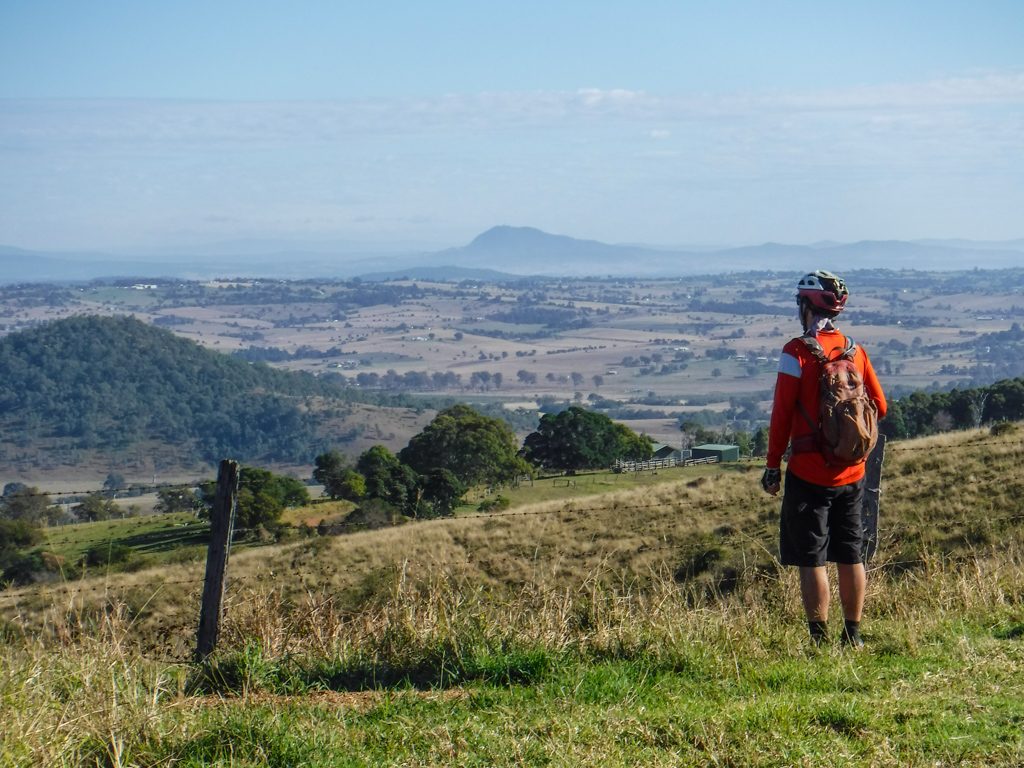 It’s difficult to stick together when you climb a long steep hill. We all ascended at different rates. This gave us some time to admire the panorama from the hilltops while we waited for everyone to regroup. 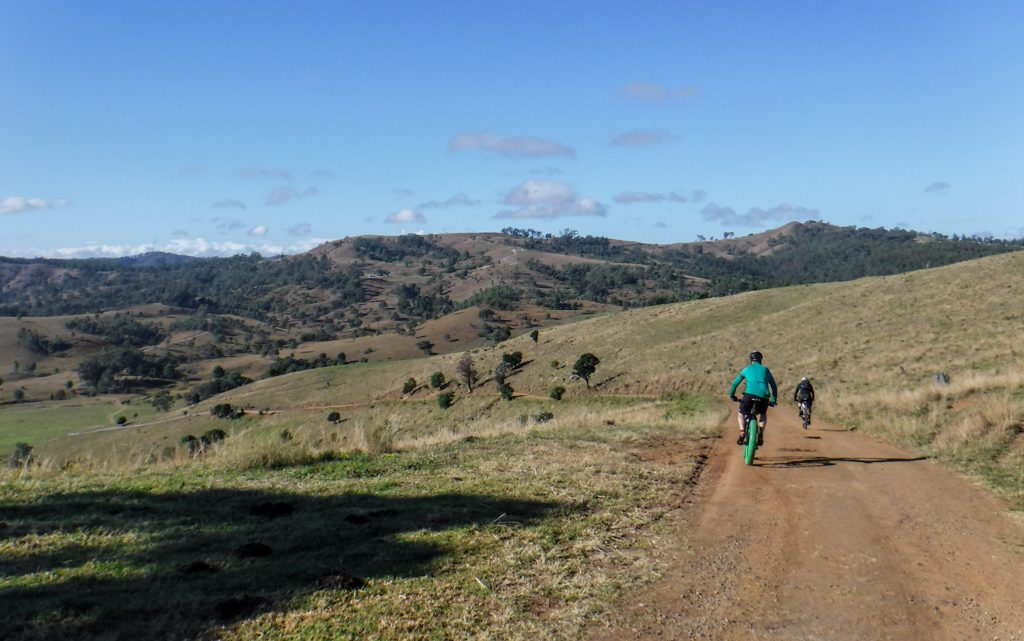 At several places we enjoyed brisk descents over the loose gravel.

Almost telepathically, Jason announced “we might need to be careful on that grey bit of road down there – it looks dangerous.”

It was. Our tyres skidded unnervingly, but we all reached the bottom without incident. 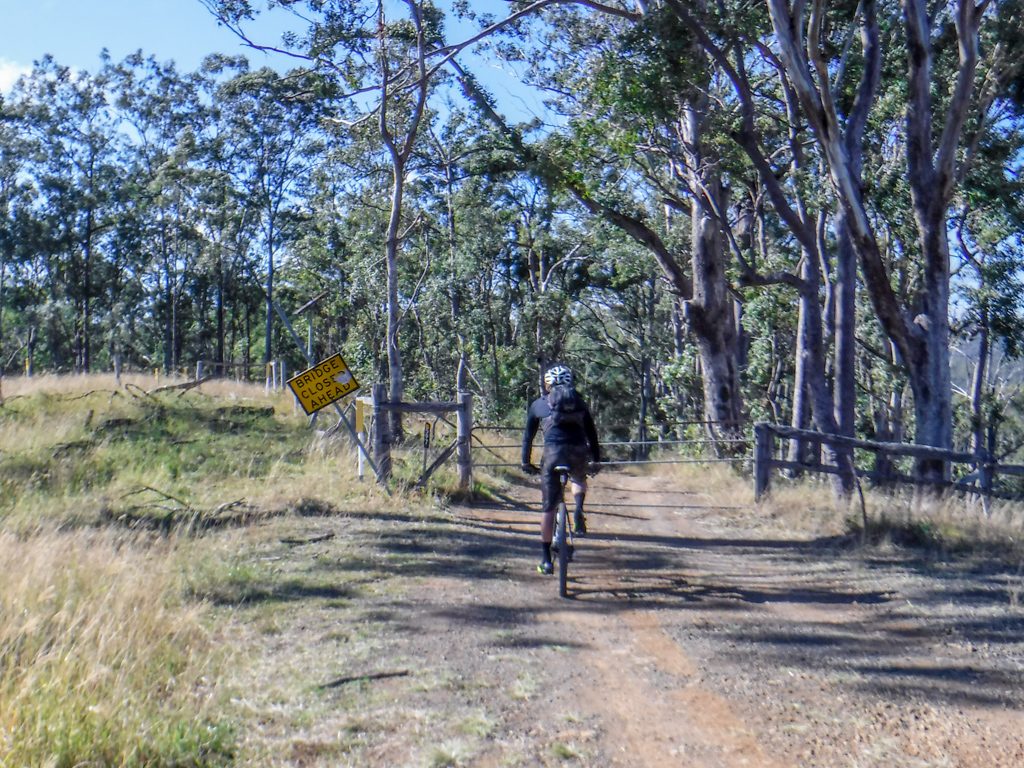 On of the fun “features” of Geiger Road is a closed bridge at the bottom of a bumpy descent. 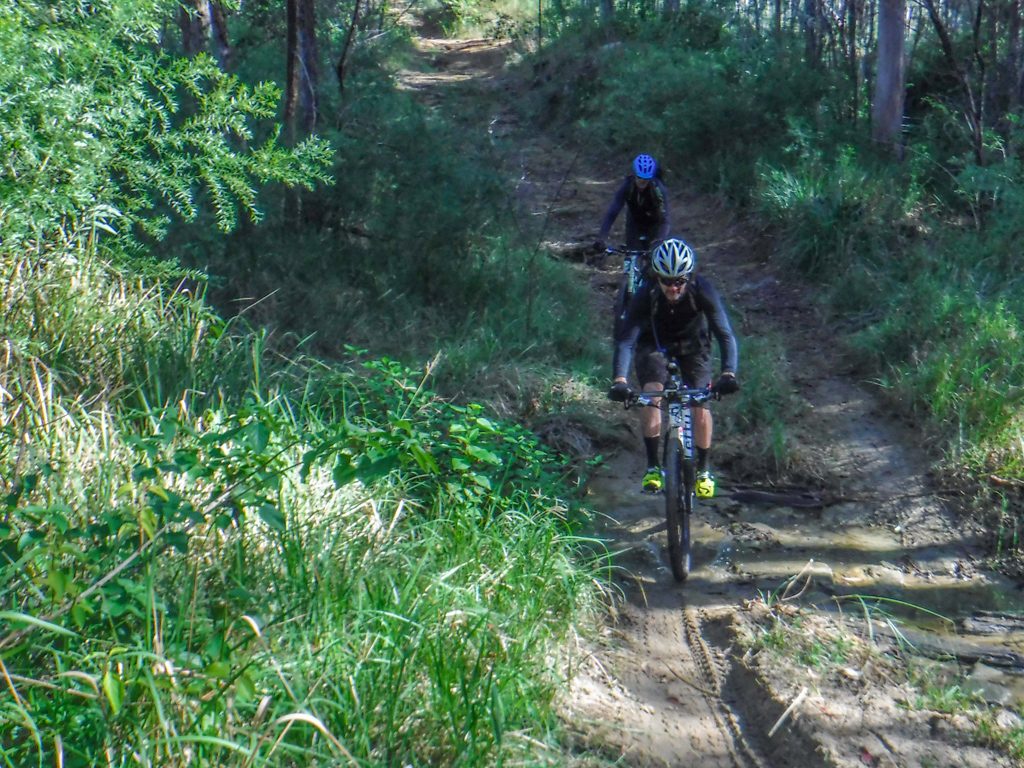 We carefully bounced down the track. My full-suspension bike made the ruts and drop-offs fun. Some of the other guys had less suspension and took it a bit easier. 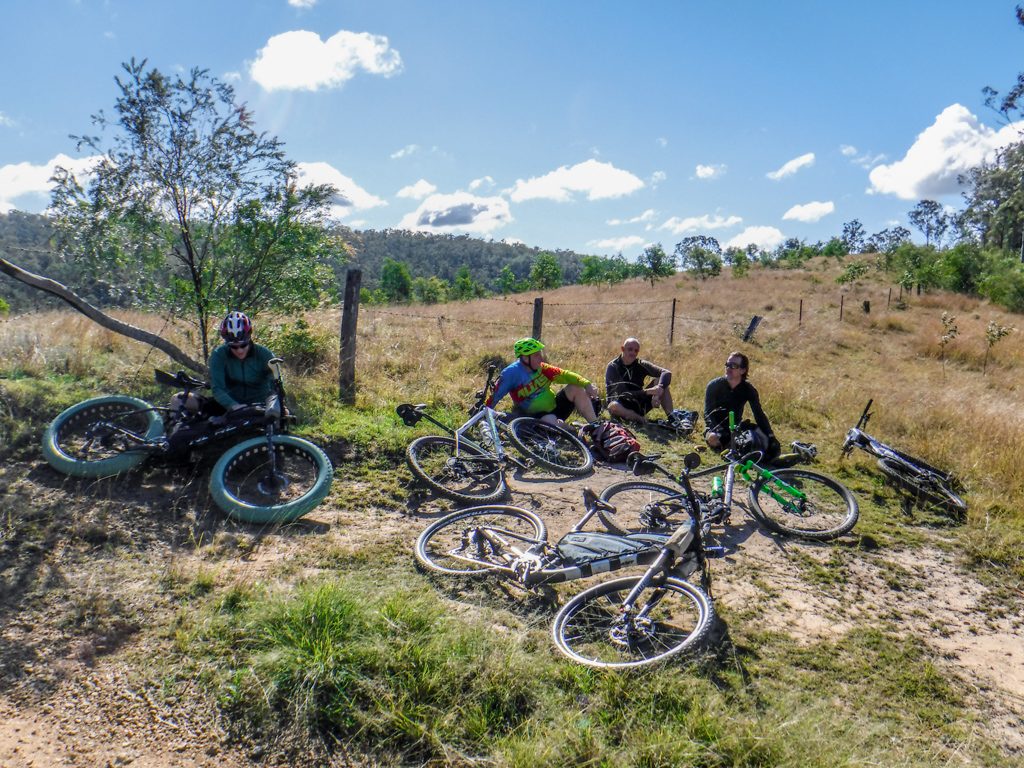 We had a second rest at the top of another hilltop. The undulations were hard work. 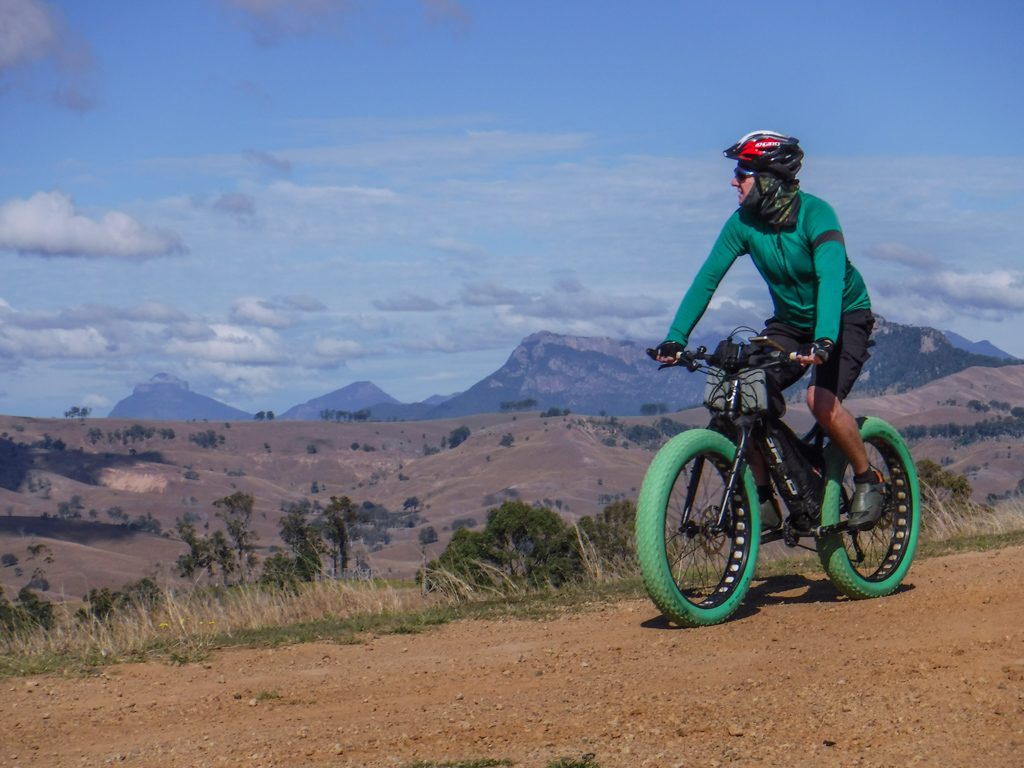 We reached a T-junction at the end of Geiger Road. To our right, the road returned to Boonah. To our left it continued to Kooralbyn. Ahead lay some of the impressive peaks of the Border Ranges. 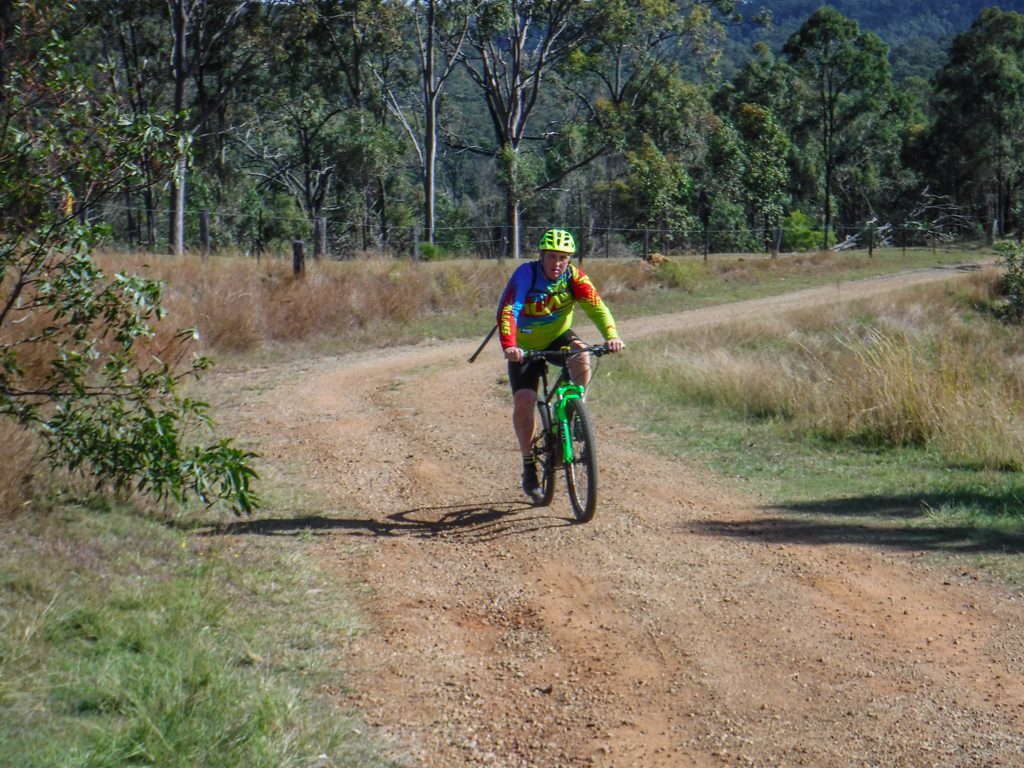 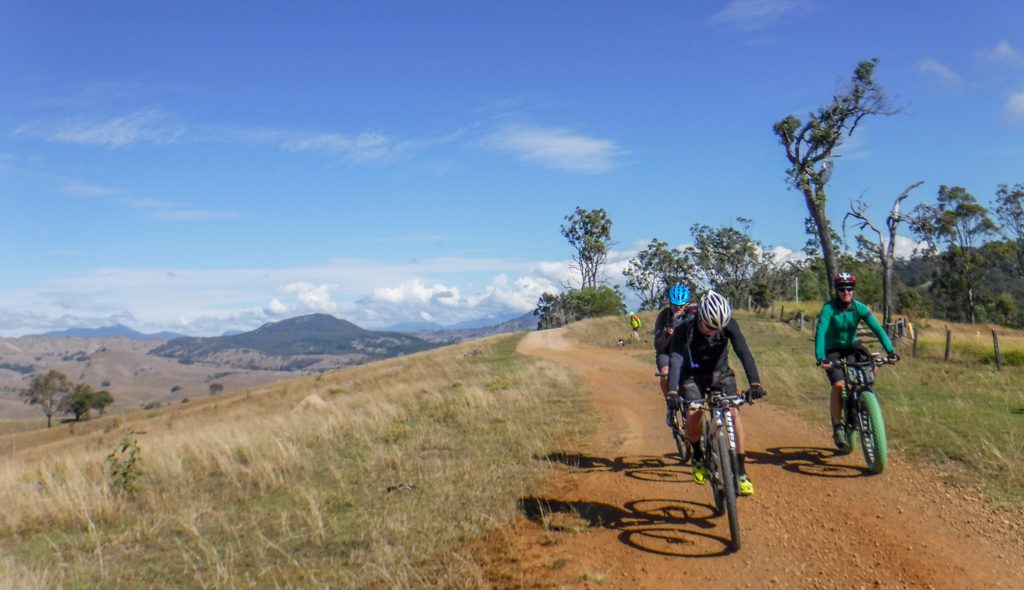 …while the rest of us rolled down Green Hills Road towards Kooralbyn. 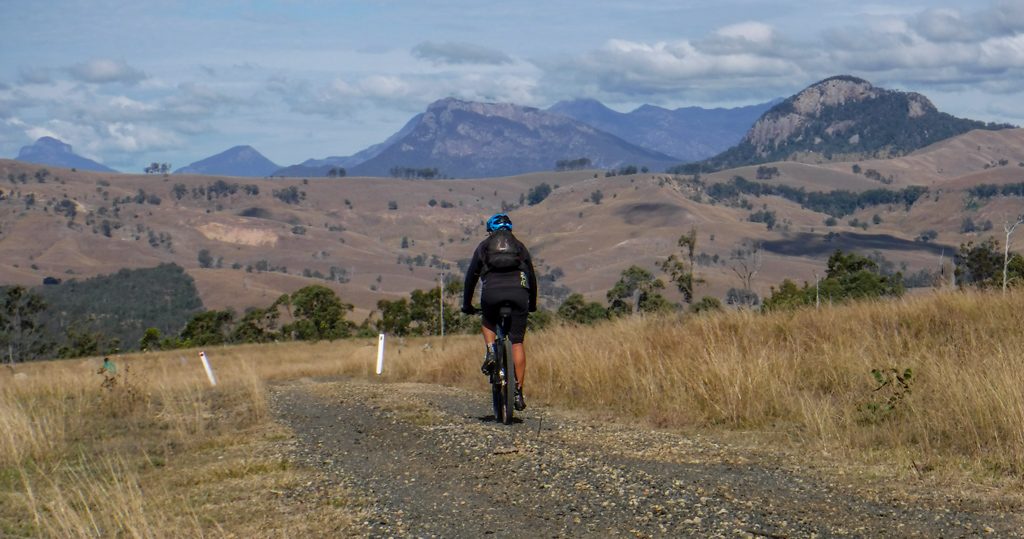 This is a pretty place. In every direction the horizon was lined with the outline of rugged mountain ranges. We followed the rocky road east. 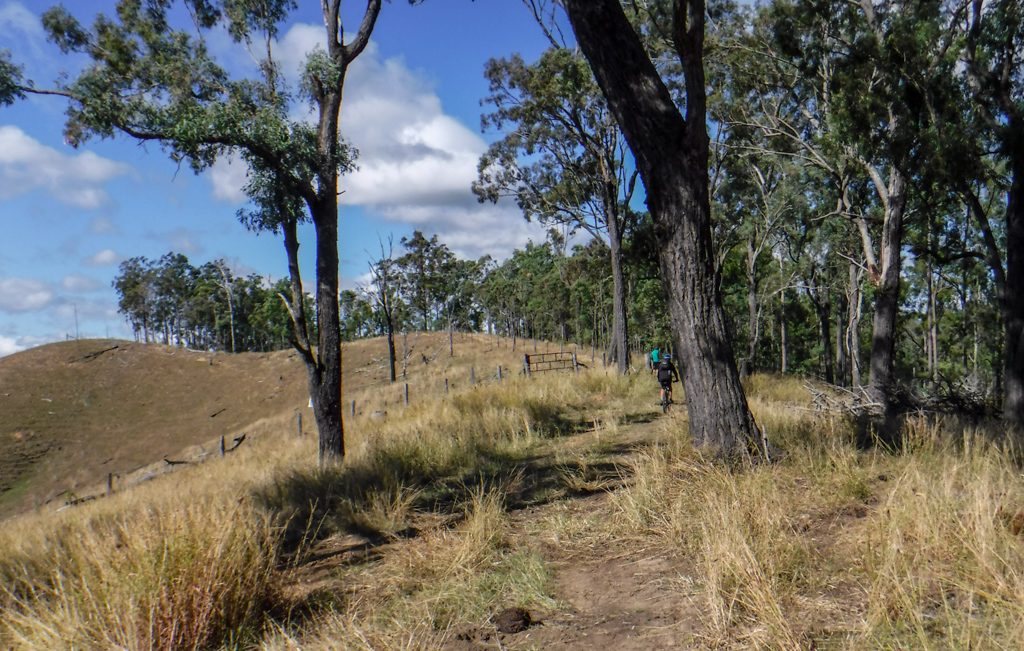 As we progressed, the road grew rougher.

As it started to descend, we reminded ourselves we would have to climb back up these slopes. 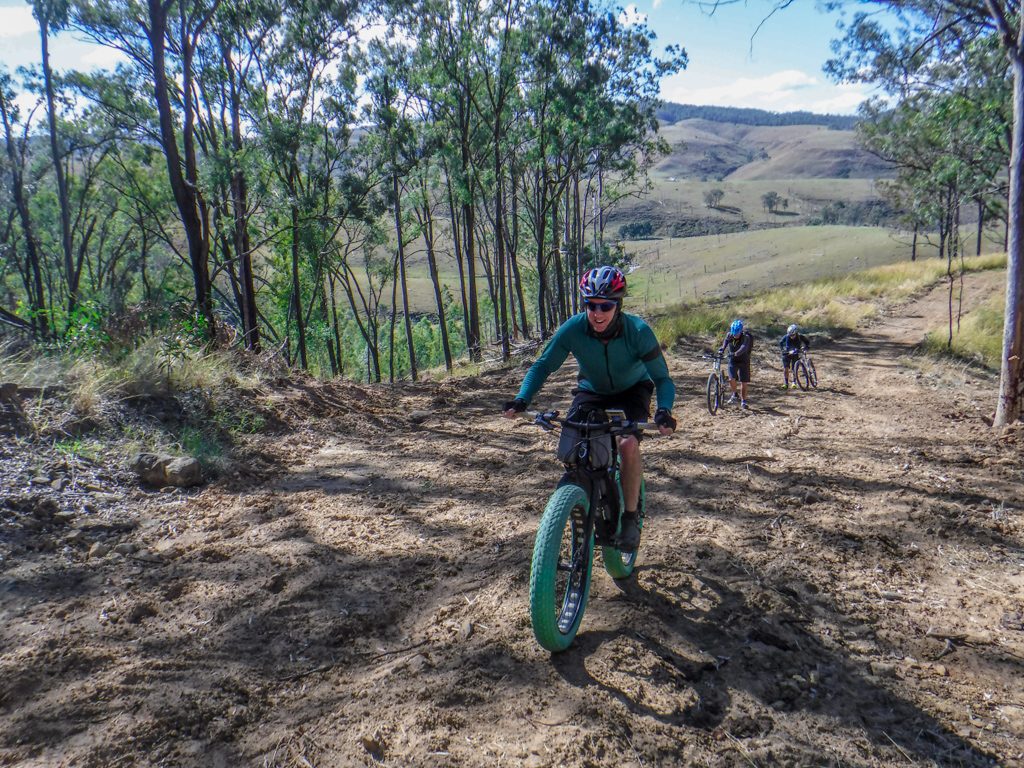 On the edge of one particularly steep and rough descent we discussed our options.

To continue would add another couple of hours to the ride. We now had a good idea of where the track to Kooralbyn went. If we turned around now we wouldn’t leave Simon waiting too long, and could all have some lunch together.

So we turned around. 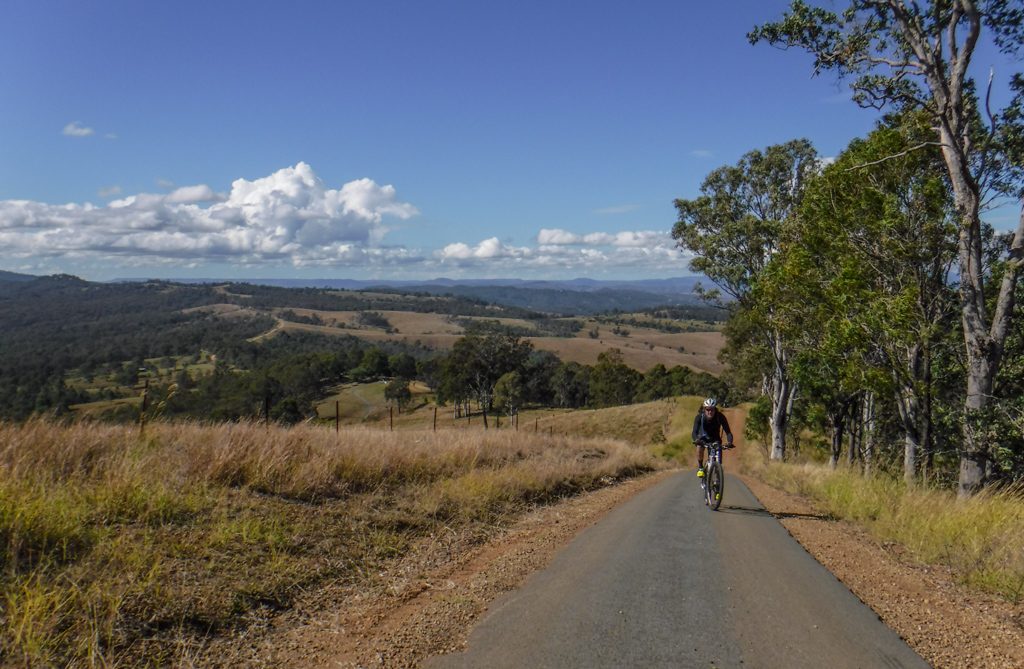 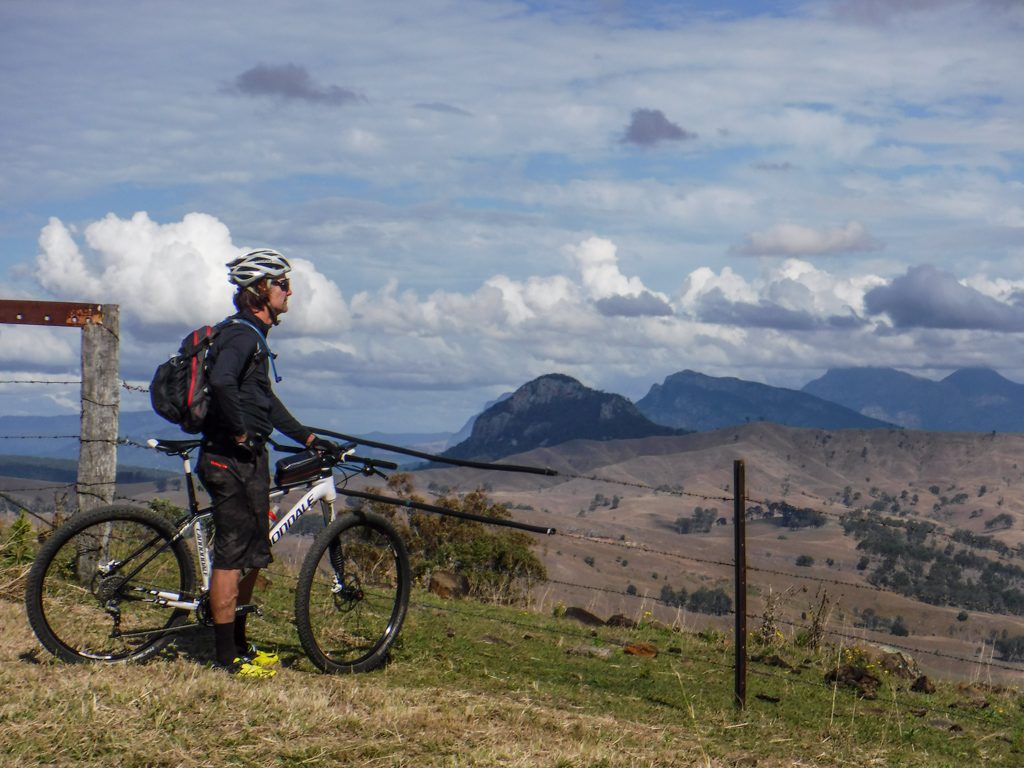 We followed Green Hills Road west towards Boonah, following the course Simon had taken earlier in the day. 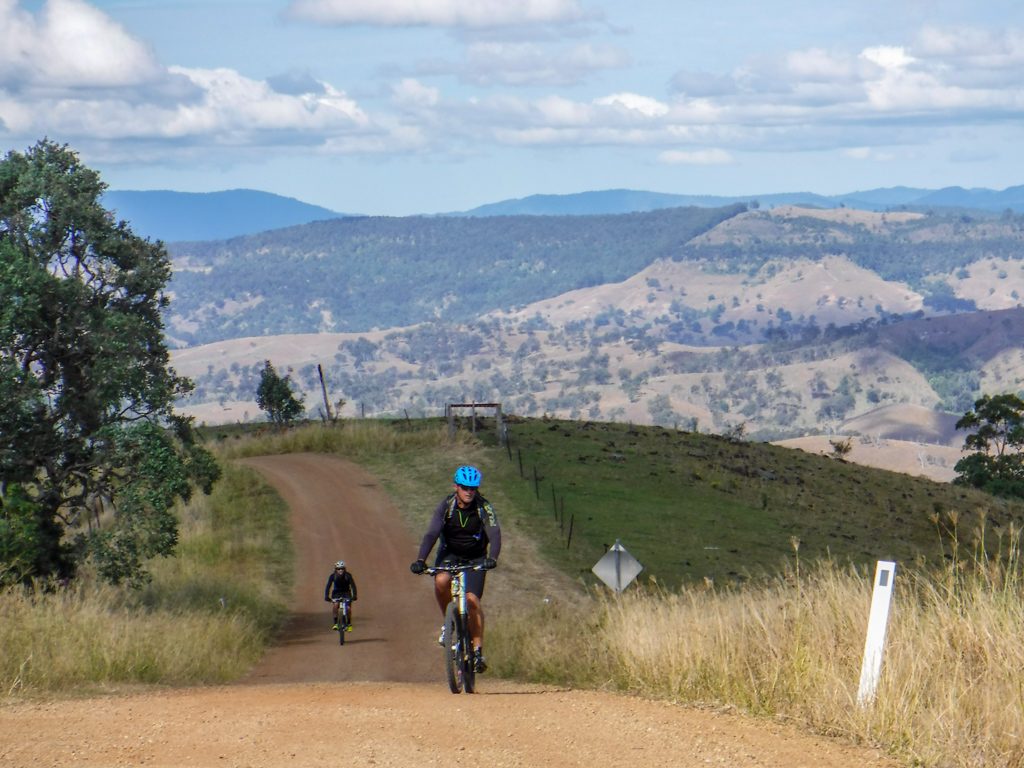 It’s steep in some places… 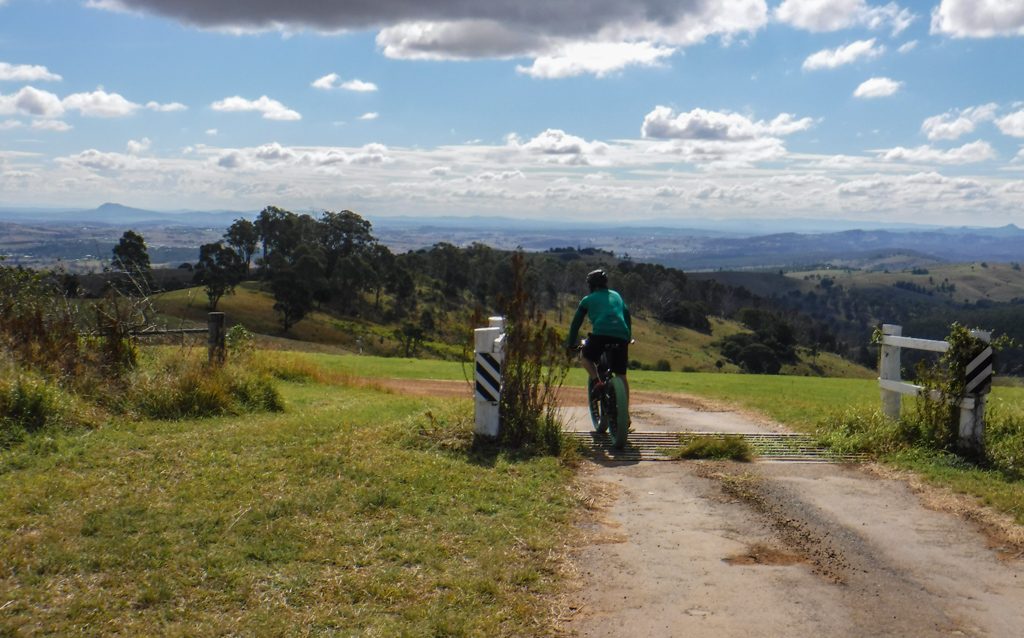 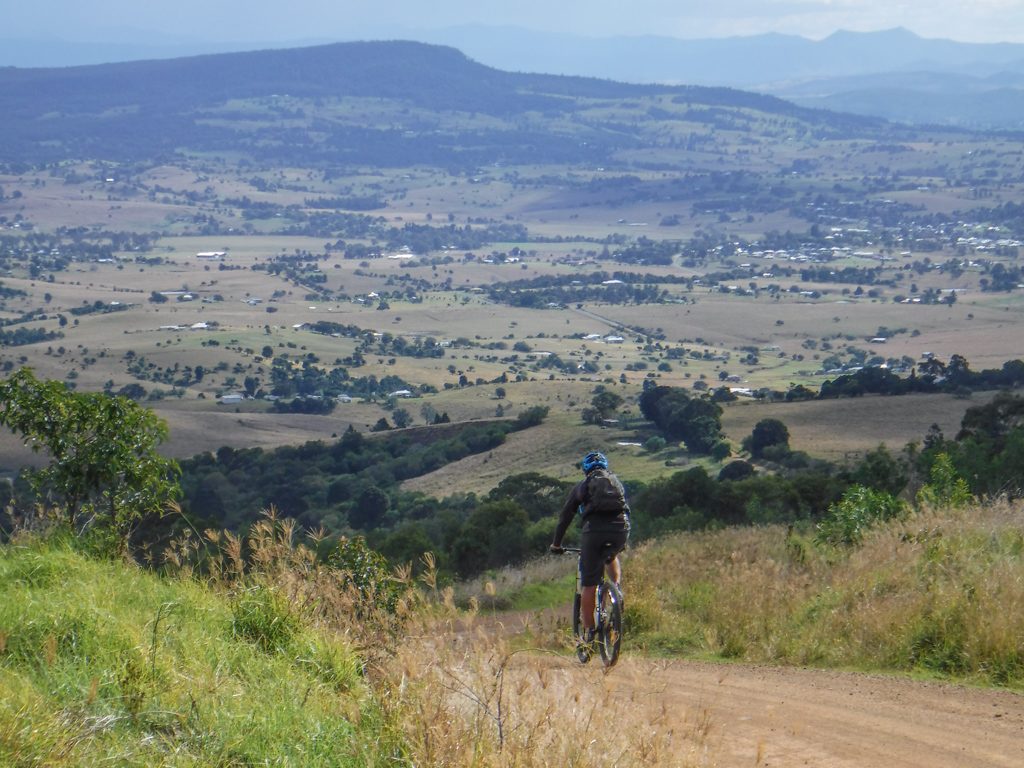 Before us lay a long descent into Boonah. What a great way to relax at the end of our ride. 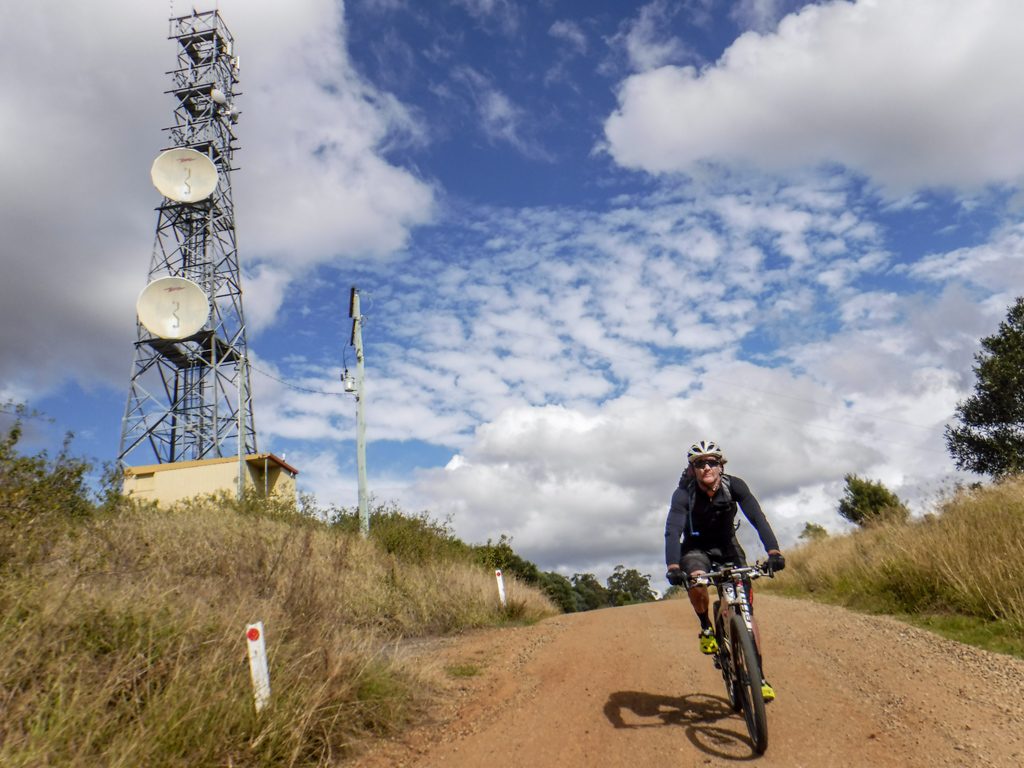 We followed the road downhill for several kilometres… 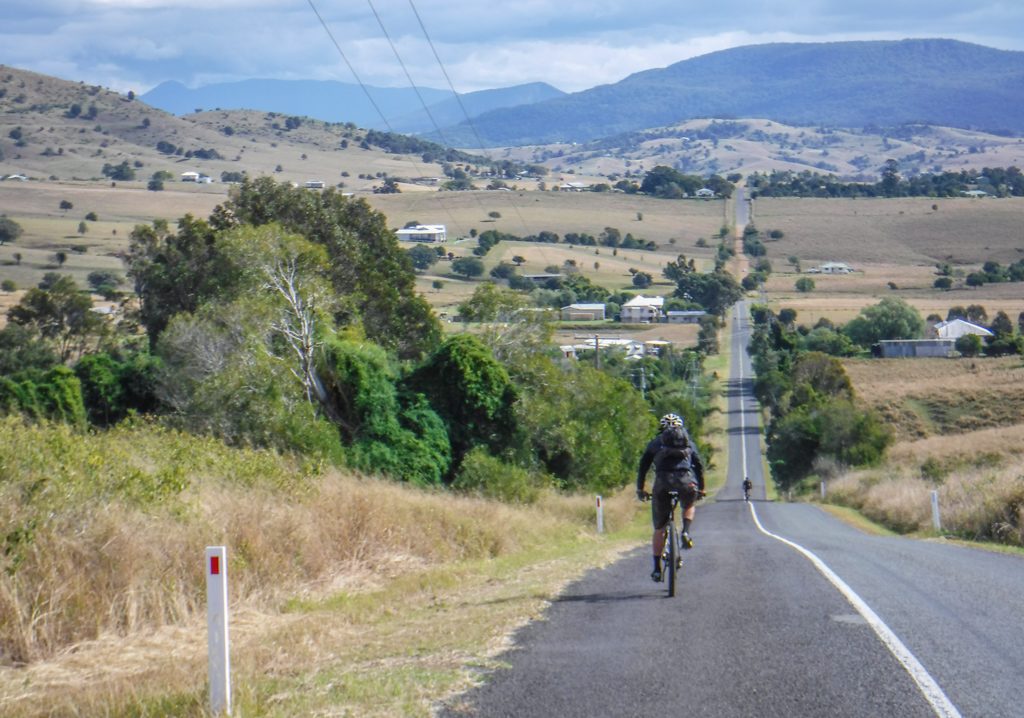 … all the way back into town.

We rode about forty kilometres in just under five hours.

During that time we climbed about 1,400 metres in vertical ascent, and I burned about 2,300 kcal.

I’d like to come back and complete the ride to Kooralbyn, but I think it might be best done as a point-to-point ride to save having to climb back up those rough hills.

This is a challenging ride, best done in the cooler months. I’ll rate it 8.5 out of 10 on the tough-o-meter.

Thanks Paul, Adam, Jason and Simon for a fun ride.