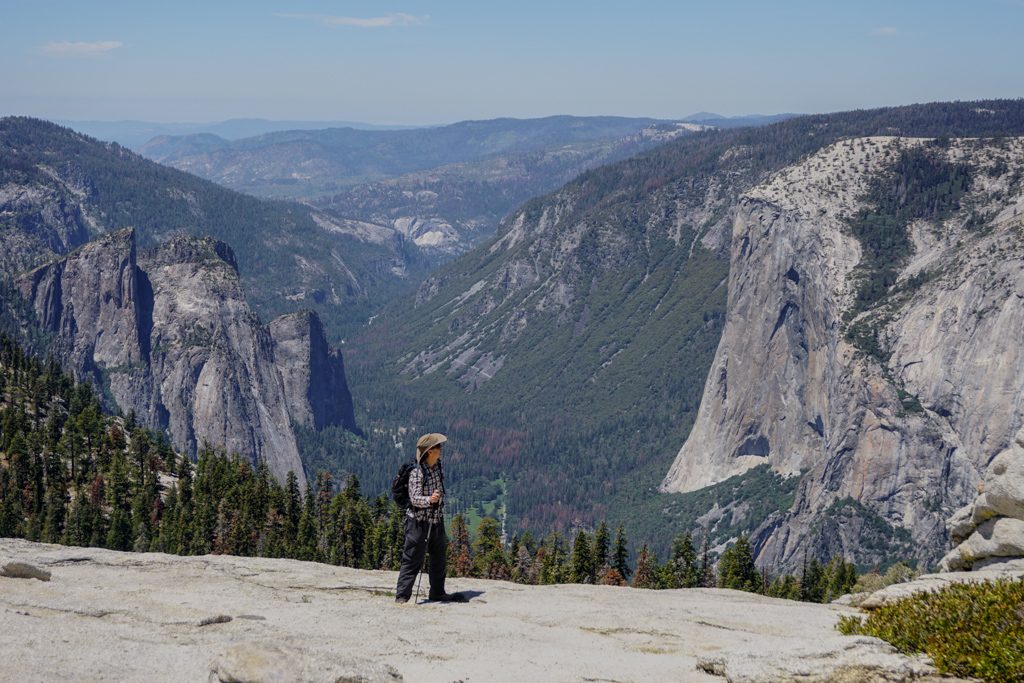 Yosemite National Park is a magical place, packed with overwhelming views. Liz and I were fortunate to spend a couple of days exploring it.


The closest airport to the national park is Fresno. We arrived on a hot summer morning, picked up a hire car and drove inland towards the Rocky Mountains.

The rolling fields of sunburnt grass reminded me of South-East Queensland. 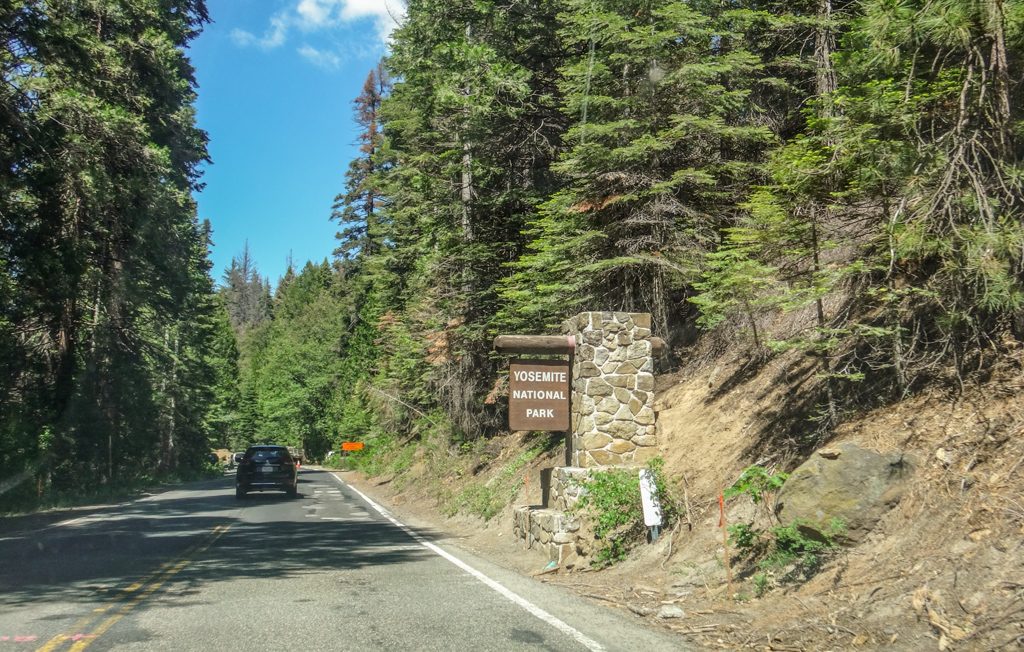 It took us just over an hour to reach the national park boundary, but I had underestimated the size of Yosemite.  We had to drive another ninety minutes on busy winding mountain roads before we reached Glacier Point.

The twin lookouts of Glacier and Washburn Points have stunning views.  They’re easy to reach (you can park your car right at the lookout), and they’re really popular with visitors.

We decided to delay our hike until the following day.  For now we just wanted to appreciate the panorama from the lookout… 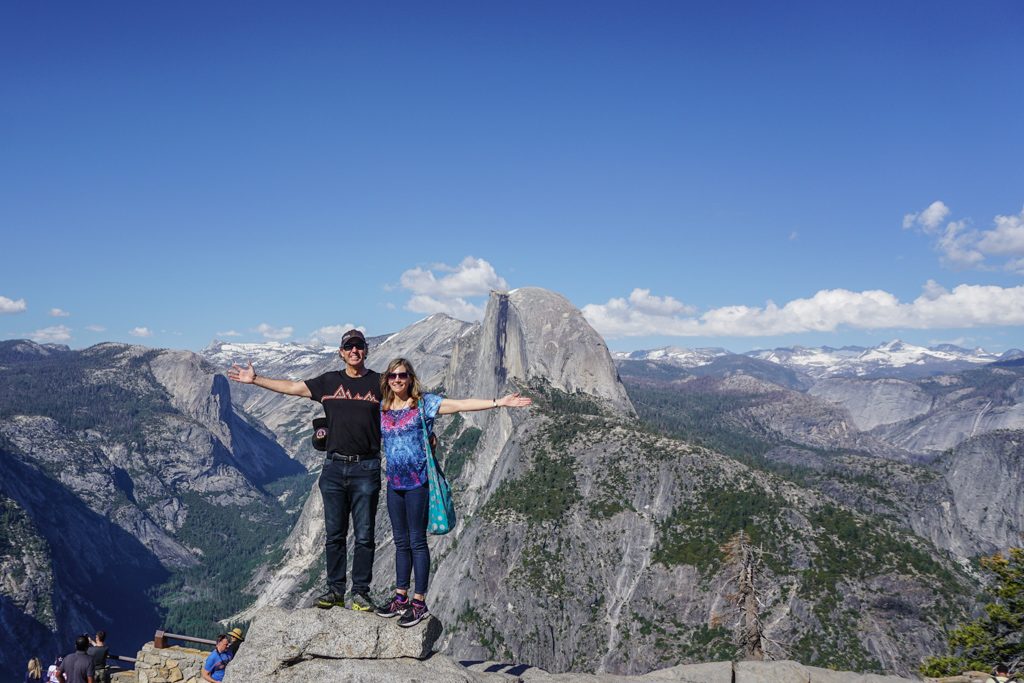 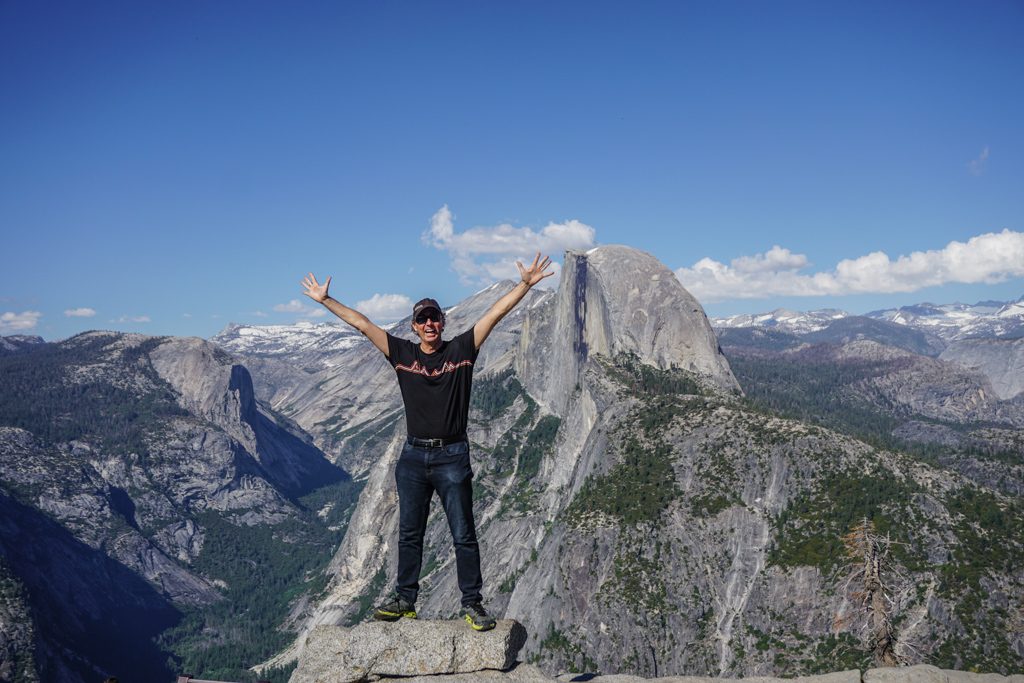 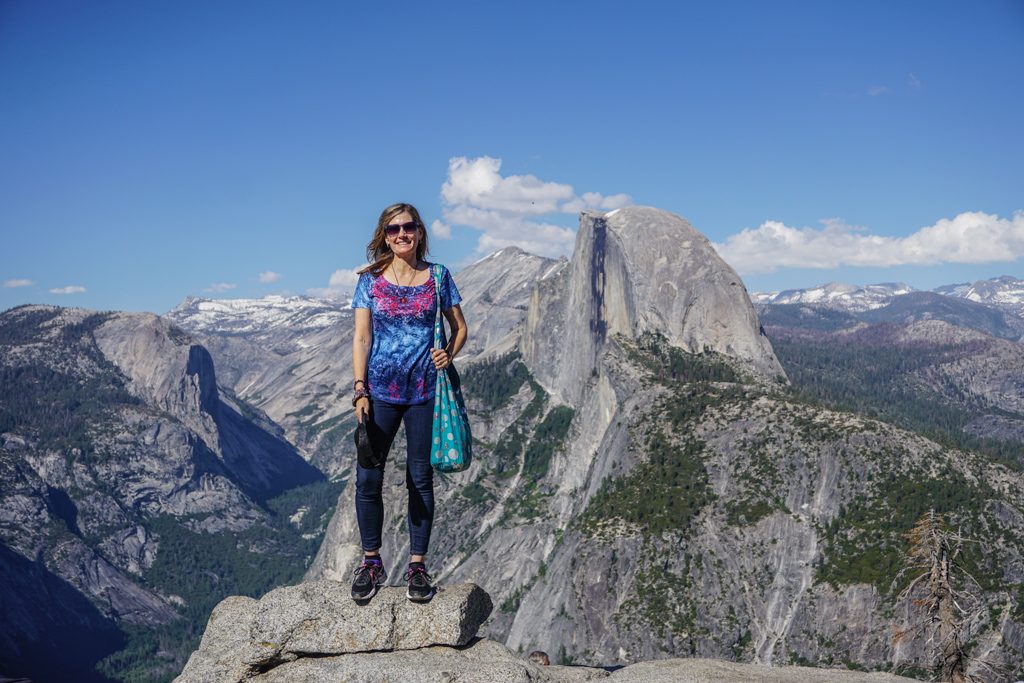 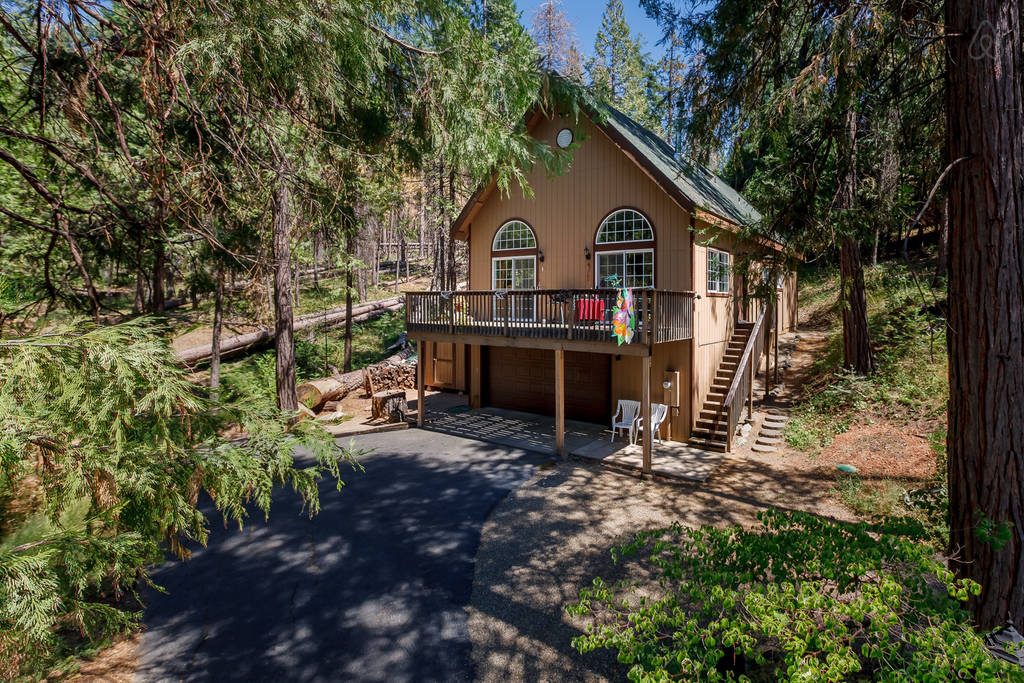 Most of the accommodation within the national park had been booked out, and was prohibitively expensive, so we booked an AirBNB at “Cedar Haven” in Mariposa.  It backed onto a vast state forest.

While it was only thirteen kilometres from the park boundary as the crow flies, it was a two-hour drive to some of the main attractions in Yosemite, due to heavy traffic and twisting roads.

Our host, Christine, has lived in the area for most of her life, and has hiked almost all of the trails in Yosemite.  She gave us some valuable advice about where to hike the following day, and how to get there. 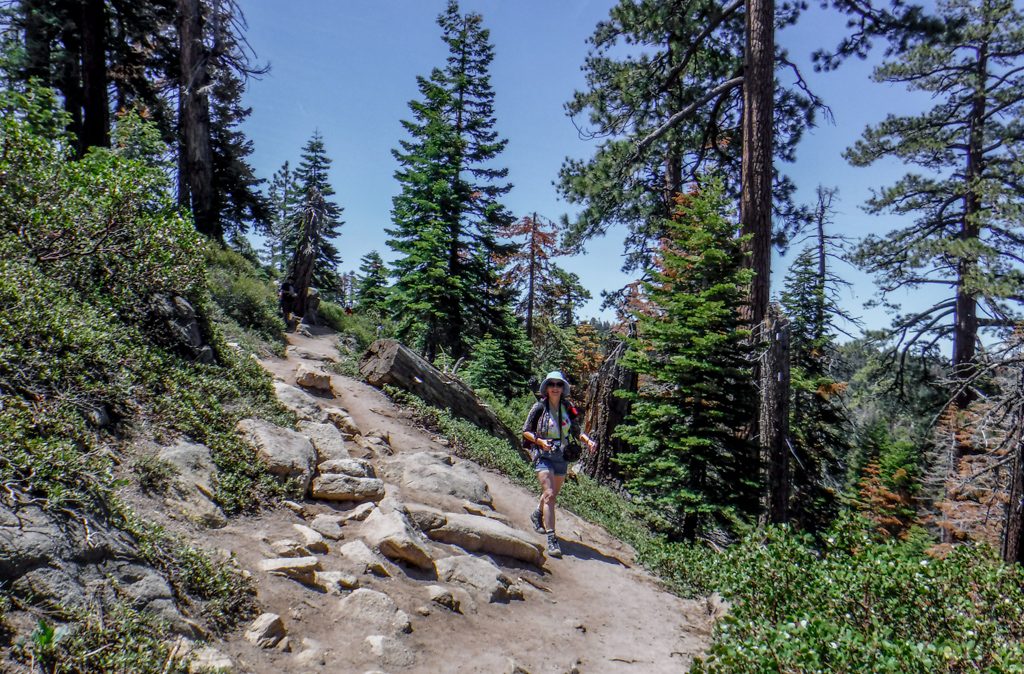 Next morning, following Christine’s advice, we started the day with a hike to Sentinel Dome. 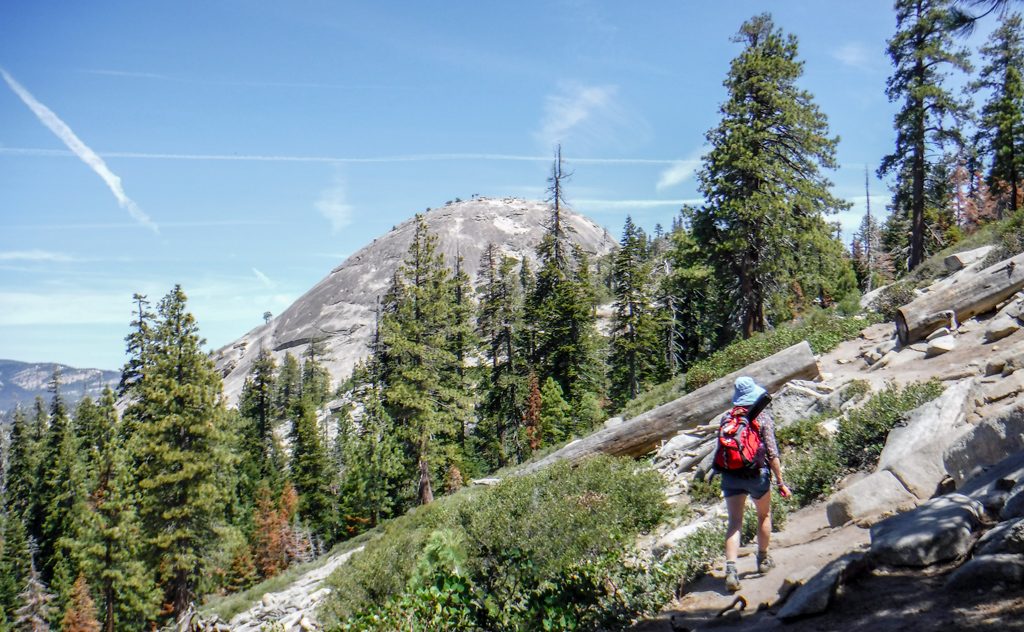 The track was reasonably flat, gently climbing over pine-clad slopes, with the bald summit of the dome visible in the distance.

The climb up the dome was surprisingly easy.  Our shoes clung firmly to the smooth granite surface.  We simply followed the other hikers up the hill.

I thought it strange to be walking in warm summer temperatures with snow still on the ground.  How could it be this hot and there still be snow?  Amazing. 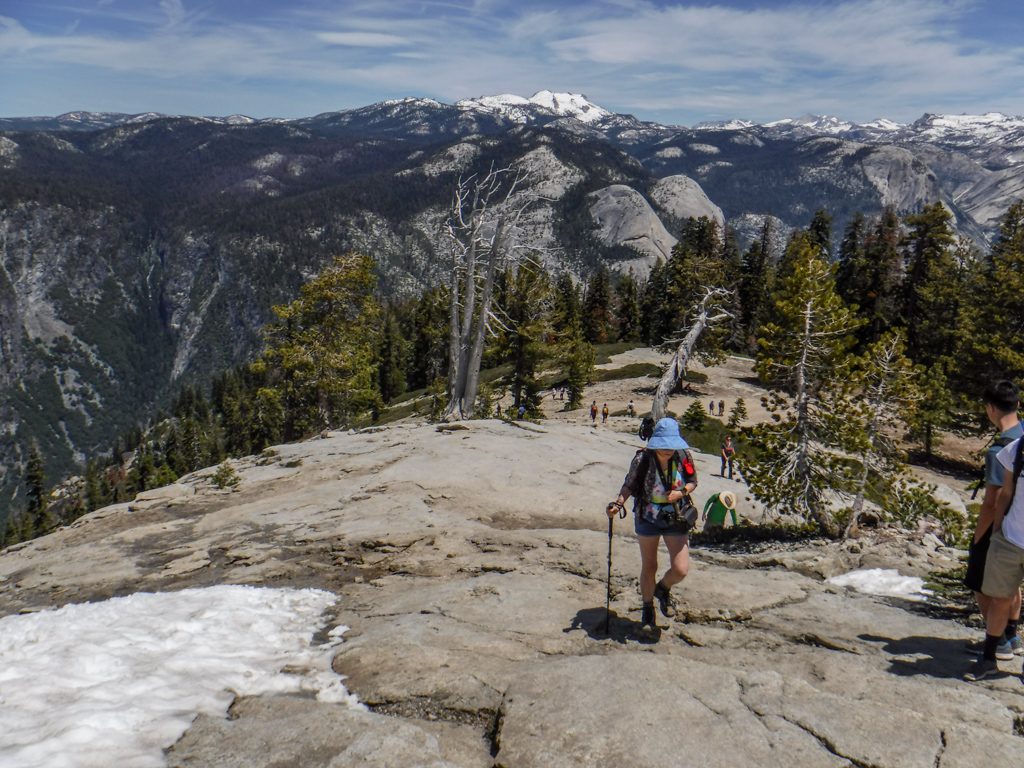 As we neared the top, Yosemite Valley spread out before us.  This was a special place.  I’d never seen anything like this before…

I looked out from the edge of the dome, over a vast valley.

On the other side of the chasm, Nevada Falls thundered over the edge of a cliff. 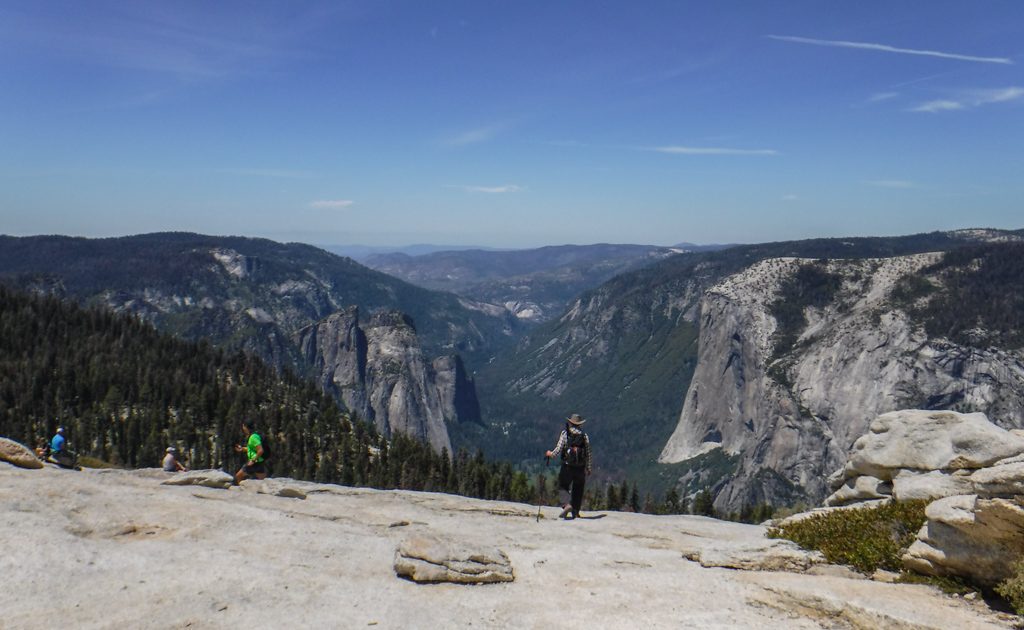 Ahead of me, the imposing precipice of El Capitan dropped almost one thousand metres to the valley floor.  Christine told me that at night you can look up and see the lights of climbers camped in mid-air on stretchers as they try to complete the arduous multi-day climb.

As we made our way back down the dome, I could see the snow-capped peaks of the high Sierra.

This was too much to take in at once.

I get the feeling that to truly appreciate this place you need to come back several times. 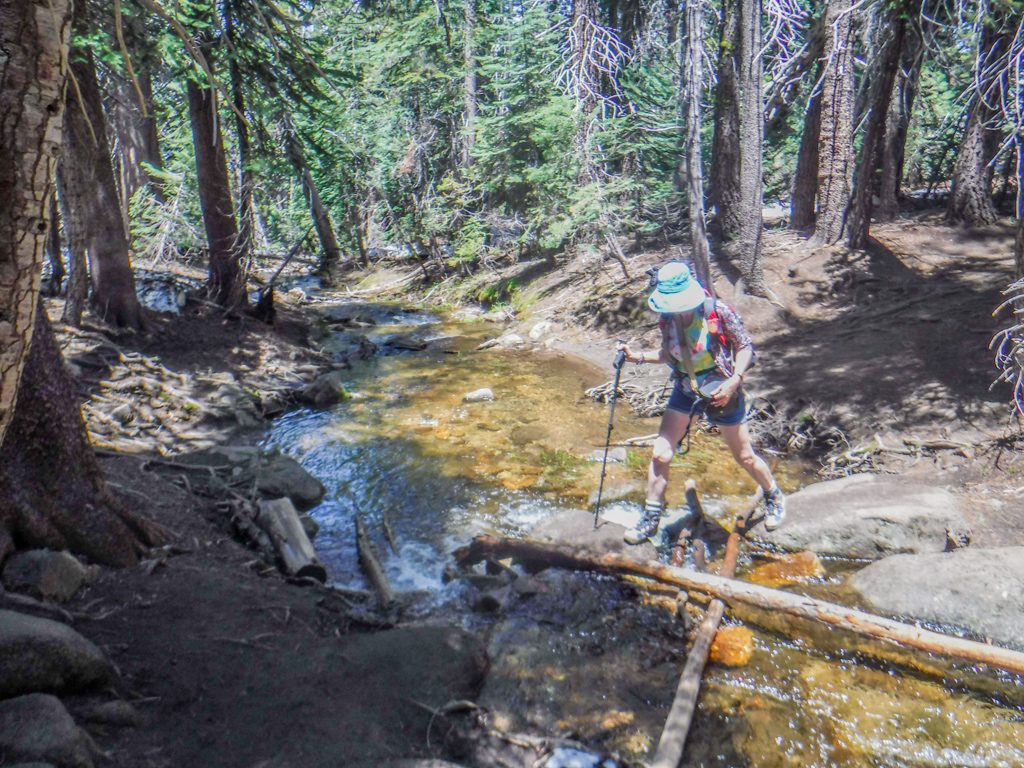 But our hike wasn’t finished yet.  We wanted to check out Taft Point, another cliff-top vantage point not far away. 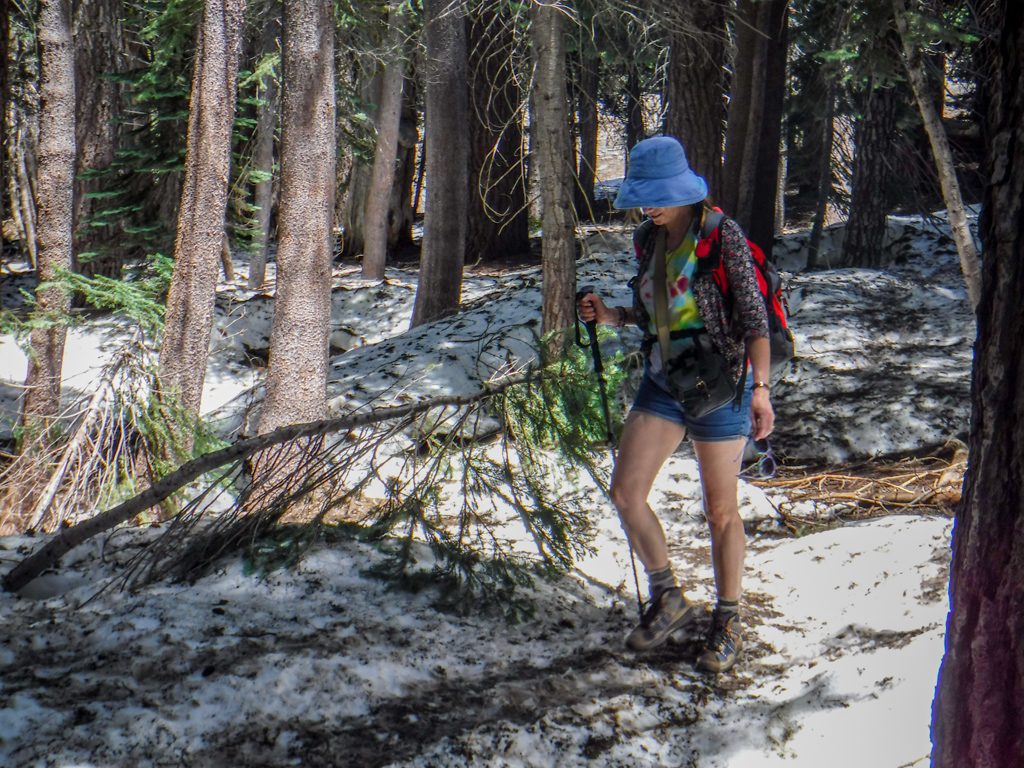 Rangers had put up warning signs explaining the track might be difficult due to thick snow.

We decided to attempt the hike anyway, with the option of turning around if the snow was too thick. 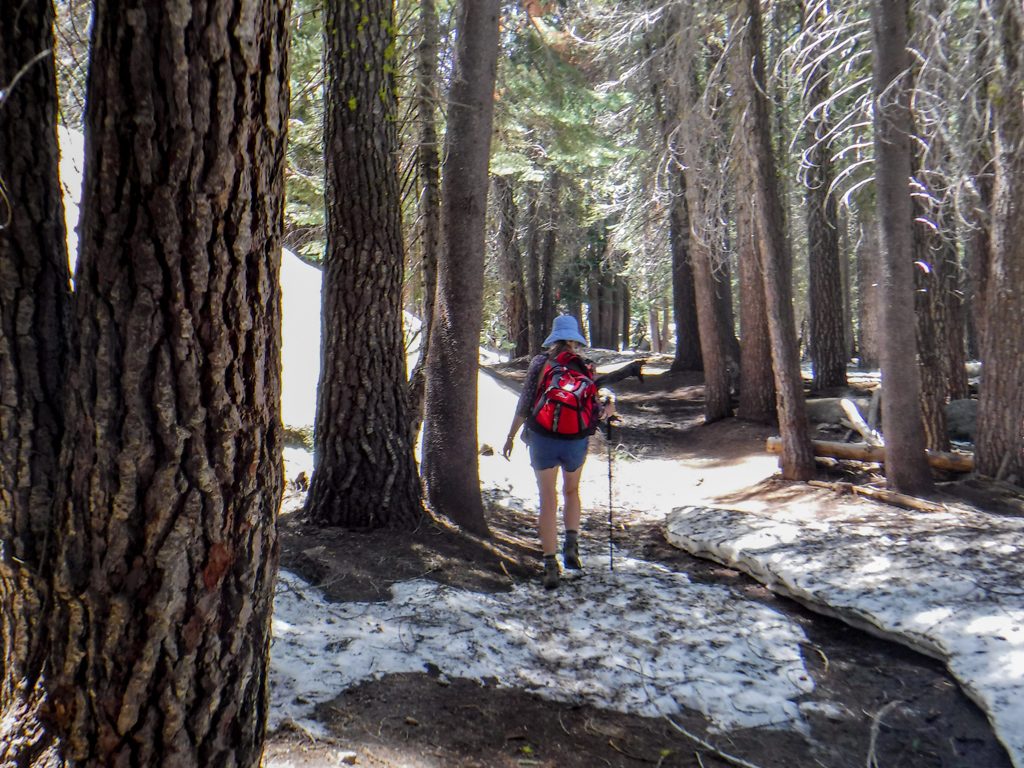 Most of it had melted in the hot sun making the ground muddy in places.

We revelled in the novelty of snow crunching under our boots.  How strange to be doing this in the heat of a summer day!

Yesterday I thought how similar this place was to home.  But today I thought the opposite.  The tall unfamiliar trees and icy ground were pleasantly strange.

We emerged from the forest near the cliffs of Taft Point.

We approached the edge and I stood slack-jawed as someone walked on a rope over the void.

The cliffs here have a sheer drop of over one thousand metres.  Most of the edges have no guard rails.  I played it safe, walked to one of the few fenced-off sections and gazed into the chasm.

With an intense blend of horror and fascination I gasped – simultaneously unable to look away but feeling terrified and wanting to pull back.

On the other side of the valley, Yosemite Falls plummeted over tall cliffs. 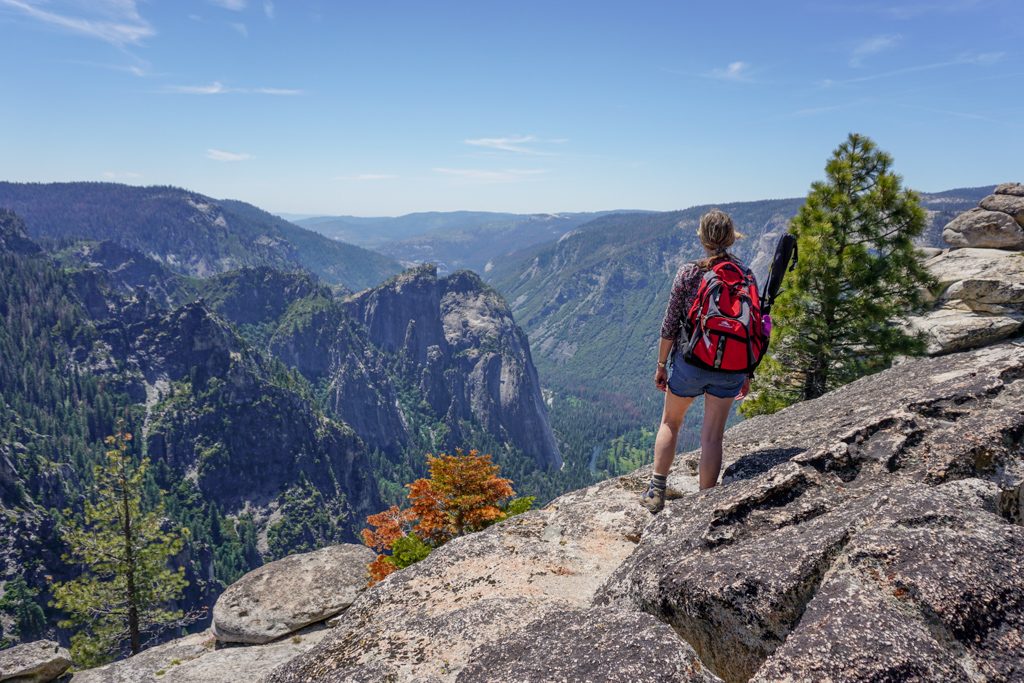 It was impossible not to be affected by the power of raw beauty like this.  I didn’t want it to end.  As I look at the photos in retrospect now, I want to return, and wish we had stayed longer.

After walking back to our car, we drove down into the valley.  On the way we stopped at “Tunnel View” – a popular vantage point offering more views of the Yosemite Valley.

Ahead lay Bridalveil Falls with a brilliant rainbow floating out of the mist.

In the distance was the odd-shaped peak of half-dome that we’d seen the previous day from Glacier Point.

We parked in the valley and walked through an open meadow to the Merced River. 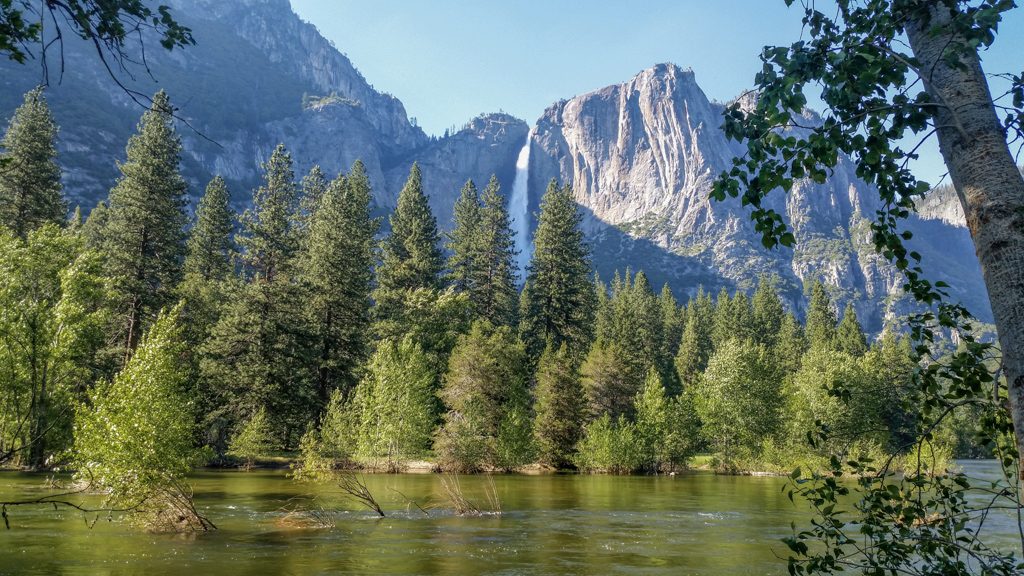 I felt like we had fallen into a postcard.

Earlier in the day we had looked down on Yosemite Falls from the heights of Taft Point.  Now we were gazing up at it from the banks of the river. 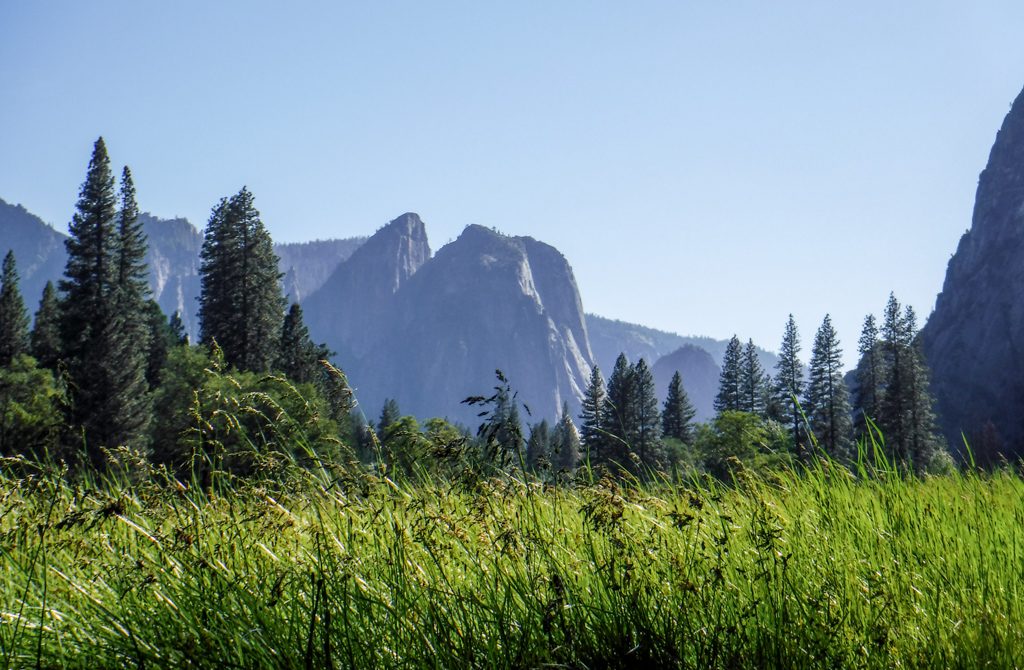 I looked back across the meadow towards some of the peaks we had stood upon earlier in the day.

How was I supposed to return to normal life after visiting a place like this?

Our hike to Sentinel Dome and Taft Point took just under four hours to cover about nine kilometres.

It’s an easy hike – you could take kids on it without any problems.  I’ll rate it 5 out of 10 on the tough-o-meter.

If you plan to visit Yosemite, here are my suggestions (based on a very limited experience):

Thanks Christine for your wonderful hospitality.

And thank you Liz, for agreeing to share this wonderful experience with me.