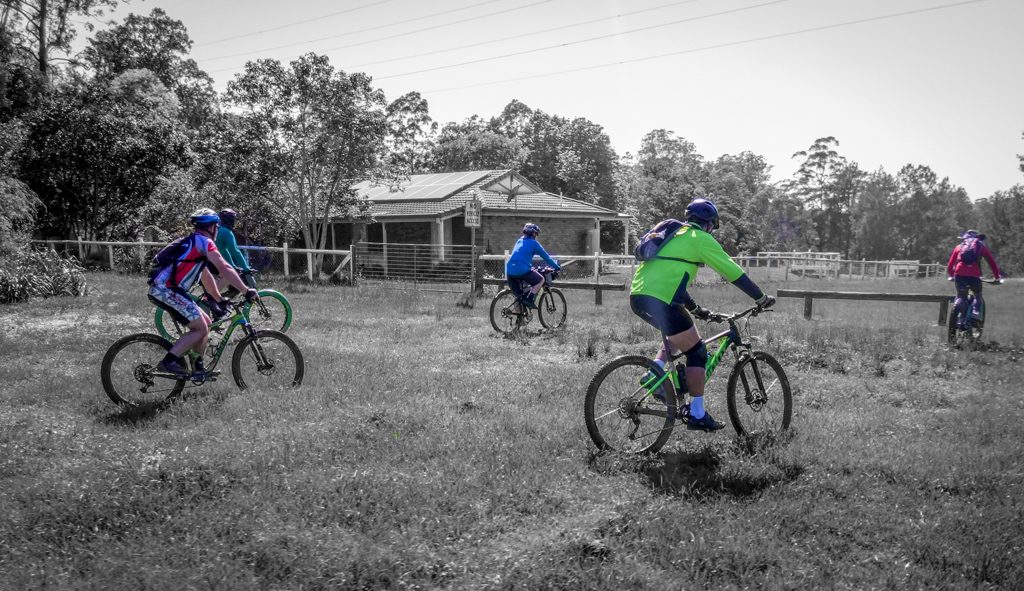 I enjoyed hours of fun as child on my bike, rolling around the local neighborhood with friends.

Today, when Calum took us for a spin around some local trails, I realized I am still that same kid, just in an older body.

END_OF_DOCUMENT_TOKEN_TO_BE_REPLACED

Deer Reserve is a rugged National Park and State Forest on the western shores of Lake Somerset near Kilcoy. Today we thought it would be fun to explore it.
END_OF_DOCUMENT_TOKEN_TO_BE_REPLACED

The Delisser Brothers, Edmund and Alfred were 19th century surveyors.

Edmund, the elder brother, surveyed the Nullarbor Plain in the 1860’s. Noting the distinct lack of trees, he coined the name “Nullarbor” from the latin words “Null” (lack of) and “Arbor” (tree). The Delisser Mobile Sand Dunes in Eucla National Park are named in his honour.

In the early 1880’s Alfred surveyed much of the Blackall Ranges and Glass House Mountains, proceeding via The Old North Road. On that journey he probably crossed Mosquito Creek.

You can read more about Alfred Delisser at John Henley’s excellent website about the Mapleton Tramway. The crossing is still there today surrounded by peaceful bushland. I ride it quite regularly on my bike. By some strange quirk of geography, it rarely floods – even after much rain. There once was a bridge over this crossing, and I think it’s possible to see the remains if you look around hard enough. 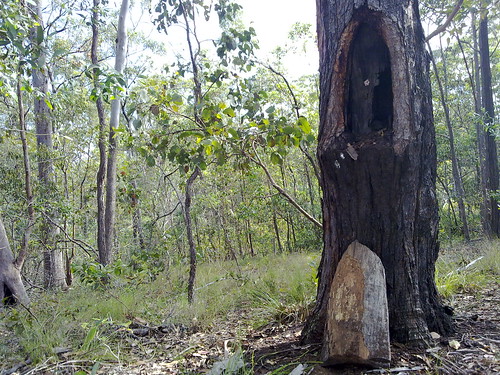 So I was delighted after finding this survey tree last week at Mosquito Creek just near the crossing to discover that it was blazed by Alfred Delisser in 1889. He had passed through this area several years earlier and was probably quite familiar with it, making him an ideal choice. No survey marks remain on the tree, apart from its original blazing. In fact the wooden “heart” of the blaze has fallen out. I thought it deserved a bit of respect so I cleaned it up and set it against the tree.

The tree itself isn’t that big. But it could easily be over 200 years old. Ironbark trees grow slowly.

Here’s part of the survey plan of the Mosquito Creek crossing created by Alftred Delisser in 1889. Many thanks to Leith Barter for obtaining this copy for me.

The survey plan is over 111 years old. But even as Delisser created it, the road he was on had been used for 45 years by Evan Mackenzie and the Archer Brothers as they made their way north to Durrundur Station.

But even that is fairly recent compared to the thousands of years that the original track had been in use by Aborigines walking from Meeanjin (Brisbane) to the Bonyi (Bunya) feasts in the Blackall Ranges. 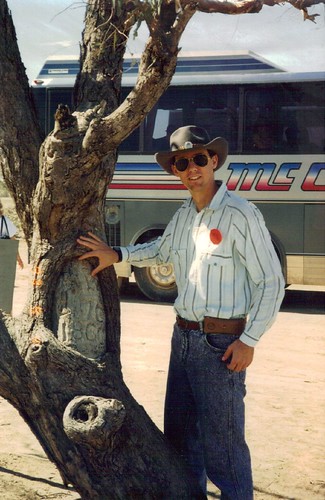 The carving says “B&W 70 1860”. Burke and Wills passed this way in 1860 on their way from Melbourne to the Gulf Country. They carved their initials on this tree as a survey marker.

Amazing how slowly a tree grows. And amazing to touch something of such national significance. About 100 miles south of here is another tree, the “Dig Tree”. Google it for more info. It’s an amazing story.

This photo was taken in 1993 when I visited Birdsville with my mate, Brian. One of my favourite spots on the Dunlop Lane / Smiths Road loop is the Mosquito Creek crossing. It’s in the middle of several km of quiet bushland trails. When I first rode it, I had to dismount to complete the crossing, but these days I just zip across it on the bike and always feel smug about it 🙂

Another survey tree. It’s amazing how once you know what to look for, these trees just seem to pop up everywhere.

Surveyors “blazed” Iron Bark Eucalypts like this one, for use as survey markers, because the species is very slow growing. So a mark will remain relatively unchanged for decades. This one is probably almost 100 years old. I’ll update when I find out more info from our wonderful local history librarian. A camel thinks she’s part of the herd. I stopped the bike and asked the camel if I could take her picture. The only reply I got was a very low grumble. Camels have attitude!

Wights Mountain has one of the best preserved Aboriginal Ceremonial Bora Grounds in our area.

I didn’t have a wide-angled camera, so I had to stitch the photos together. Can you make out the raised ring of earth?

The Bora Grounds consisted of one large ring in which important tribal ceremonies were conducted, and a second secret ring where young initiates were taken to learn “mens business”. The two rings are connected by a sacred pathway approximately 400m long.

As I stood by the large ring, I imagined what it would have been like to stand here hundreds of years ago in the firelight as the tribe sang their songs, and young boys became men – learning secrets handed down for generations.

I felt a sense of loss.

European history is almost clinical. It has been chronicled in books for centuries for anyone to read. Aboriginal history is different. To learn it you needed to have a relationship to the person telling it to you, and a personal commitment to the community. We’ll never know many of the stories and secrets told here – they died with the story tellers.

I’ve only photographed the larger ring. I didn’t think it was respectful to photograph the smaller ring. If you want to see that, you’ll need to go to Wights Mountain yourself! 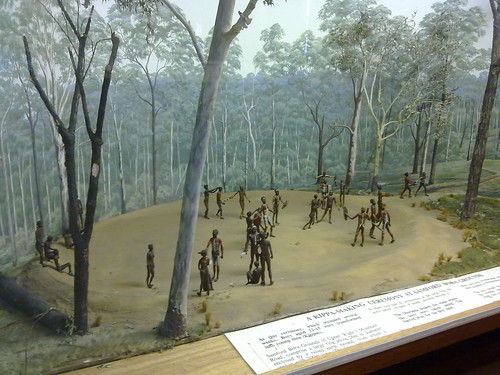 Here’s a diorama at the Samford Historical Museum depicting how the Bora Ring would have been used by the local Aboriginal people. 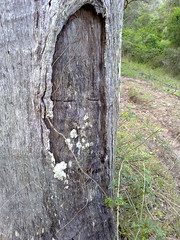 There are several Marked Trees at the Bora Grounds. One of these is obviously a Government Survey Tree (marked with an “R” and a number). I’m not sure whether the other trees are survey trees, or have been “marked” by Aborigines to signify the importance of the site. I’ll update the information when I find out. 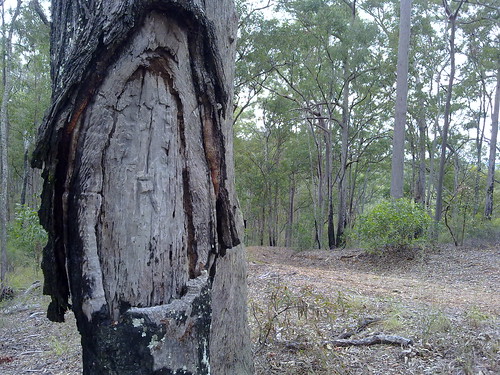 One morning while I was zooming down Clear Mountain Road on my bicycle at about 70km/h this strange looking tree caught my attention. The next day I came back to have a closer look and discovered it had been “blazed” by a surveyor. Surveyors often used to mark survey points by cutting out a semi-circular patch on the bark, and emblazoning it with survey symbol.

My friend, and local historian, Leith Barter informed me that the tree was recorded on a survey by Gavan Newman in 1938. It was either blazed by him then, or during an earlier survey in 1920.

If you’re interested there’s a copy of part of his original survey plan here: In history we often think of explorers embarking on exciting voyages of discovery, but in Australia’s past, much of the “exploration” was done by men of maps – surveyors like Newman:

John Oxley was a surveyor in the Royal Navy. James Cook and Matthew Flinders were arguably the best cartographers of their age.

But if you ever stumble across a blazed survey tree, spare a thought for the unsung explorers like Gavan Newman. Surveyor Martin Lavelle marked this tree in 1867 while he was surveying the Griffin area on the northern banks of the Pine River.

Surveyors often used natural features as reference points when preparing a plan of an area. When trees or stumps were used, they would cut a mark in the tree to make it easier to find by others.

This stump is known affectionately by locals as “Tom Petrie’s Stump”, probably because it marks the corner of a property that he purchased in 1870.

The surrounding area is being redeveloped from rural land into a housing estate. Happily, the developers have agreed to protect the tree, erect bollards around it, and place an informative marker near it so people can understand its significance.

Next time you see an old tree with a large triangle cut out of it, listen closely and you might hear the whisper of an old story.