Deer Reserve is a rugged National Park and State Forest on the western shores of Lake Somerset near Kilcoy. Today we thought it would be fun to explore it. 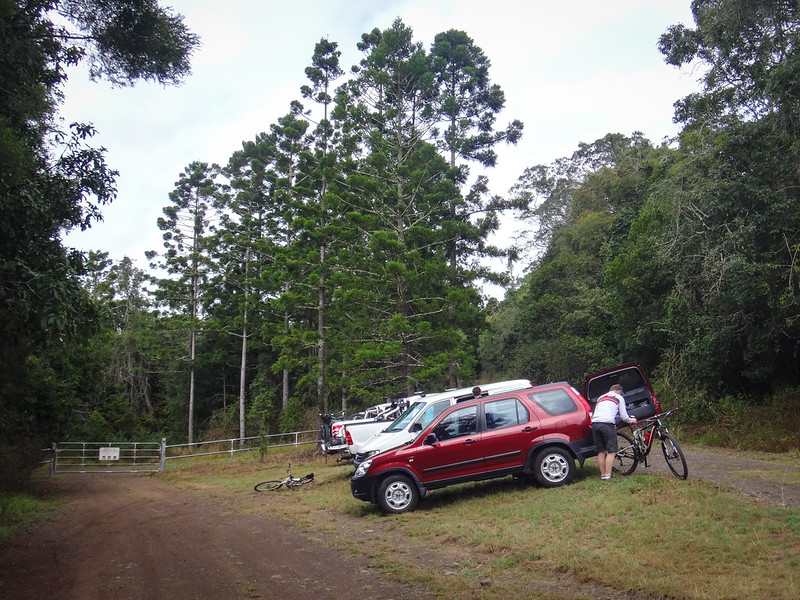 I would be travelling on foot while my friends rode their bikes. We hoped that we might meet up somewhere in the forest part-way through the adventure. 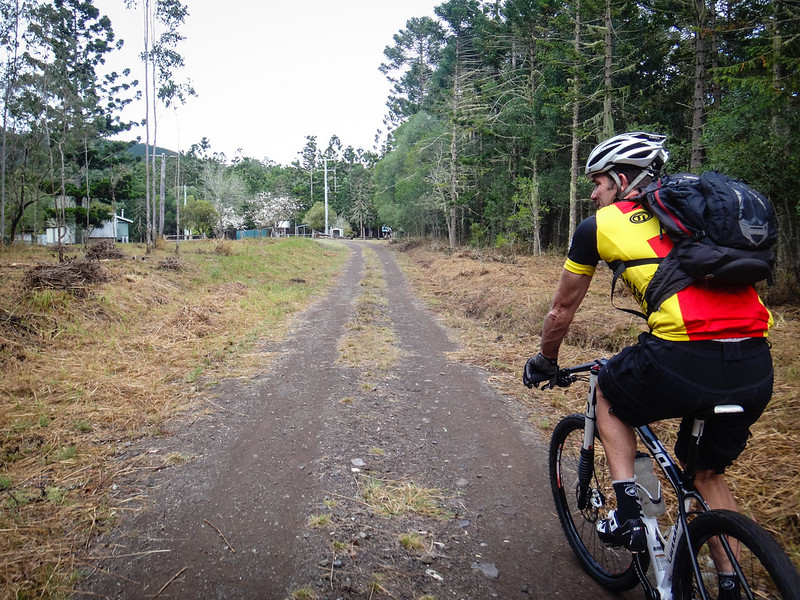 This is an unusual place.

The southern half, rough and inaccessible, is a national park. It’s home to several vulnerable species such as the Brush-tailed Rock Wallaby, Glossy Black Cockatoo, Koala and Grey Goshawk.

The northern half is a state forest containing native forest and hoop-pine plantations on steep mountainous slopes. It’s crisscrossed by management trails, which is perfect for hiking and mountain biking, provided you don’t mind hills.

Deer Reserve is named after a herd of deer – a gift from Queen Victoria to the people of the fledgling state of Queensland who had named their state in her honour. Since their arrival in 1873, the deer have flourished and can be found in many forests in the area. 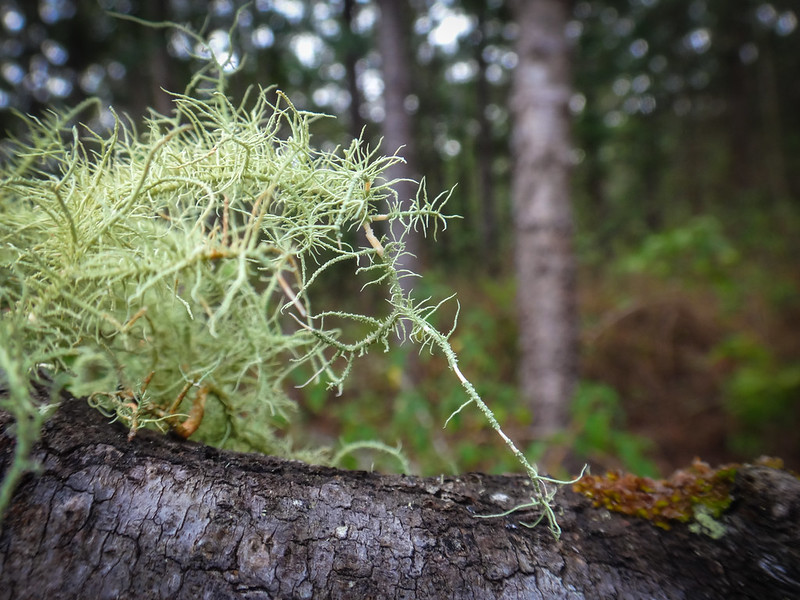 As my friends disappeared into the distance on their bikes, I began the long trudge up the hill through the forest. 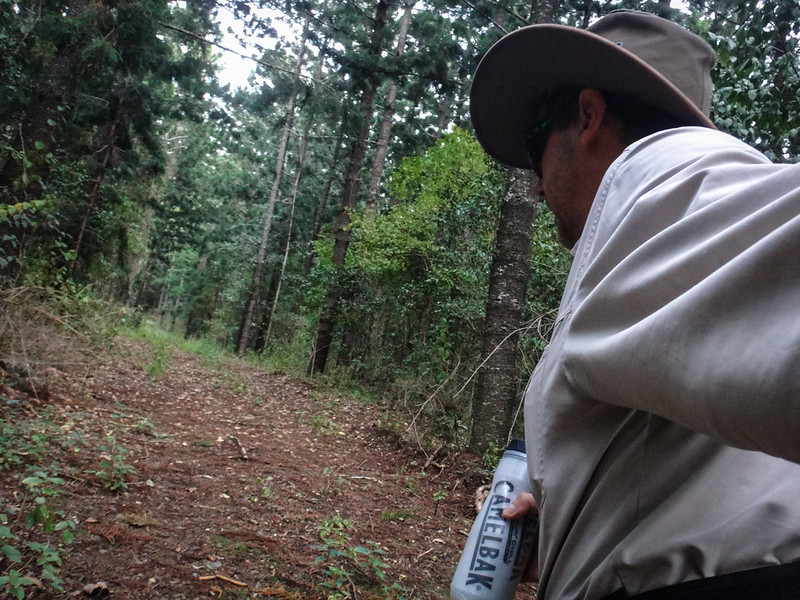 It’s a long walk to the top. I climbed 300 metres in elevation in about 3 kilometres. 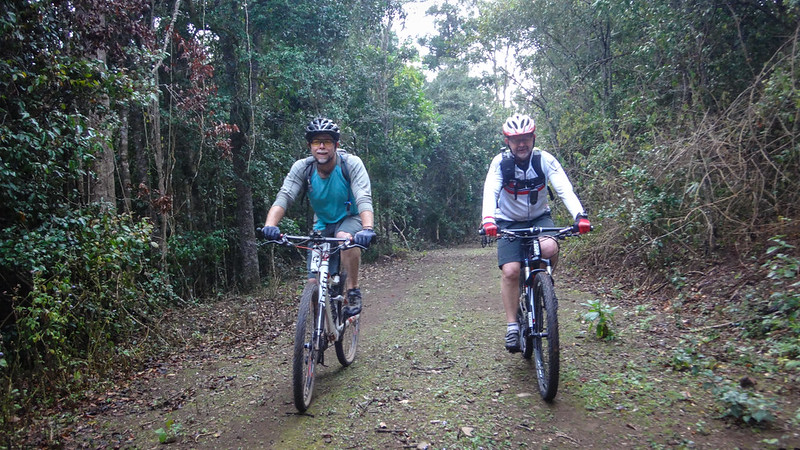 It’s a hard climb on a bike too – but despite the steep climb, I wasn’t able to catch my friends. 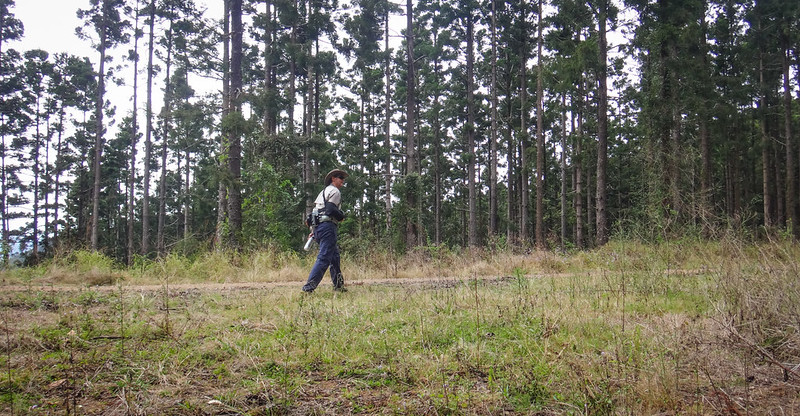 As soon as I reached the flatter terrain on the ridge my curiosity took over. I’ve been reading a fascinating memoir written in 1931 by Mary Macleod Banks called “Memories of Pioneer Days in Queensland”. Mary grew up not far from here at Cressbrook Station, on the banks of the Brisbane River in the 1860’s and 70’s. From her house she could see this range, and often rode her horse to this very spot with friends:

…while I was still a child there were campings to explore new paths and ascertain boundaries. We rode through dark scrubs guided by ‘blazes’ chopped by a tomahawk on trees a year or two before, and halted to blaze other trees when we found a better track. The rich, earthy smell of the scrub was all about us; we took our horses carefully over trailing vines, looking for rare plants, orchids, and staghorns growing on the trees, or a scrub-turkey’s nest. This was a mound, built up by the turkeys, of leaves in which the hens laid their eggs in community, leaving them to hatch out in the warmth and moisture of the decaying vegetable matter. We listened for the delicious notes of the bell bird, and the
resounding crack of the coachwhip bird; the soothing gurgling of the swamp-pheasant we had heard nearer the river. None of these rare creatures ventured near the homestead: we made their acquaintance on our expeditions.

The K.C.B. tree, marked with these initials, stood on the summit of the range where three station properties met—Kilcoy, whose owner was Capt. the Honble. Louis Hope; Cressbrook, my father’s home; and Mt. Brisbane, in the possession of Mr. Francis Bigge and his two brothers. Mr. William Butler, the genial manager of Kilcoy, and highly prized as our Father Christmas at the right season, sometimes met us at the K.C.B. tree to join our camp. While I yet rode only a pony I was a member of one or two of these early camping-out parties. We set off in the afternoon, leading a packhorse laden with tarpaulins, blankets, victuals and billy-cans for boiling tea, and rode up a steep spur to the higher ridges. After some exploration we found water and settled for the night. The gentlemen set up tents, lighted the fire, cut down branches for bedding and hobbled the horses; the ladies unpacked the provisions and made ready the meal. Our hunger appeased, we sat round the camp fire and told stories, sang glees and catches, and chatted; then more logs were piled on the fire, and the gentlemen retired to their tent in the background. The fire was stirred to flames before we separated as a beacon to the homesteads watching for our signal on the plains below.

We did not sleep much; there were strange sounds among the trees and inquisitive insects came to inspect us. One night rain began to fall while we were in our tent and held steadily on throughout the morning. Our horses slithered down the hill slopes on our way home, and when we reached the river we found it in flood and running fast. There was nothing to be done but to cross as quickly as possible, and we swam our horses over with much excitement. 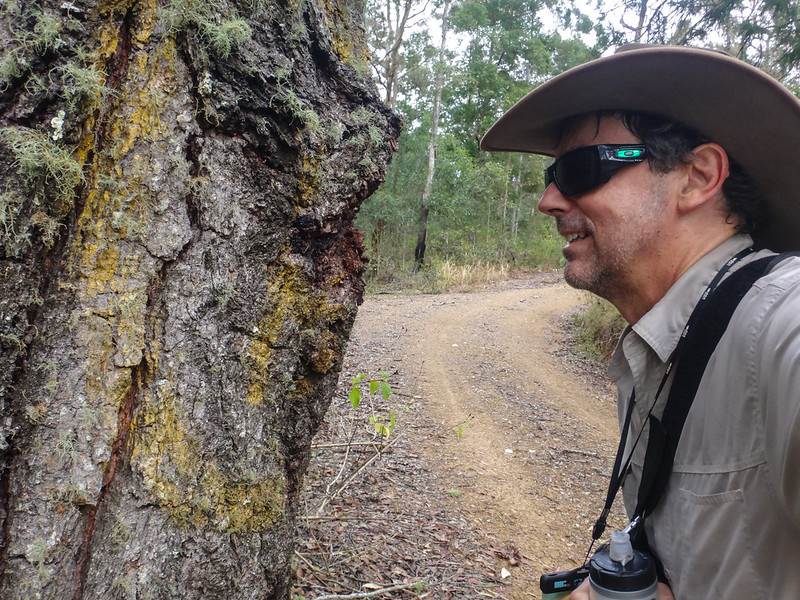 What was this “K.C.B. Tree” that Mary spoke about?

As soon as I got to the top I started looking for blazes on the trunk of every Ironbark I found, hoping to see the letters… 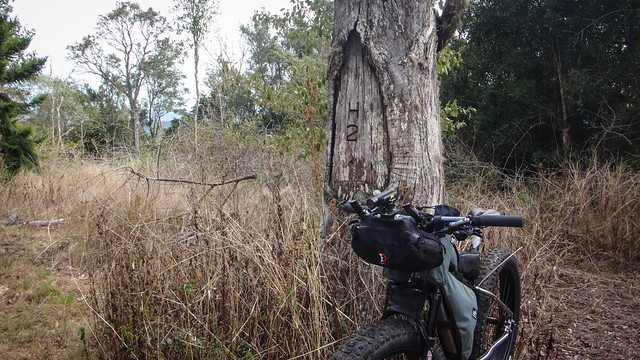 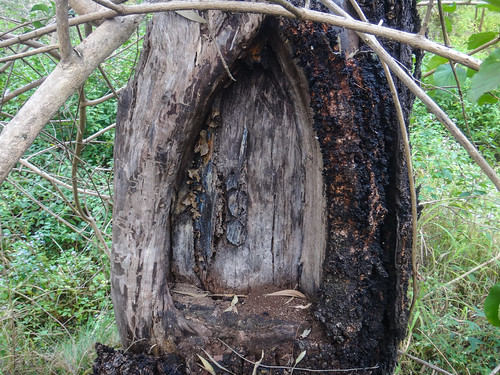 I also asked my riding buddies to keep an eye out for suspicious looking “blazed trees”. They humoured me and took a few photos as well. 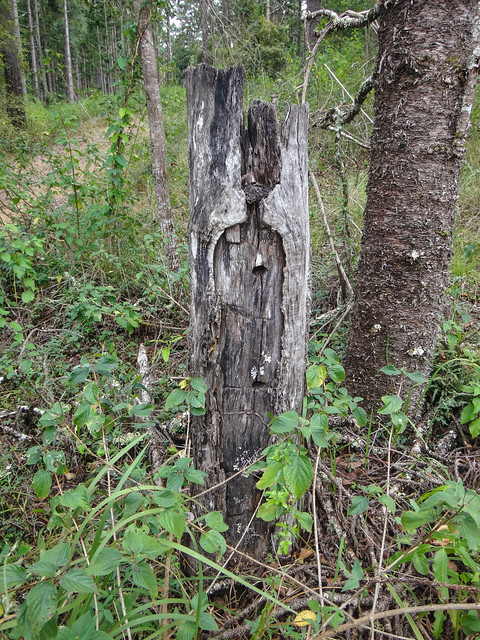 Although I can’t be sure – I think this old stump is probably the KCB tree. The QNPWS management plan says that it is the “remains of an old grey Ironbark” and this stump is pretty much right on the boundary of three localities (Greggors Ck, Fullham and Hazeldean) which approximately line up with the colonial properties of Kilcoy, Cressbrook and Mount Brisbane).

The sketch on the right is by 19th century Queensland artist Donald Thistlethwayte, which was included in Mary’s book to provide an illustration of her trips to the area. 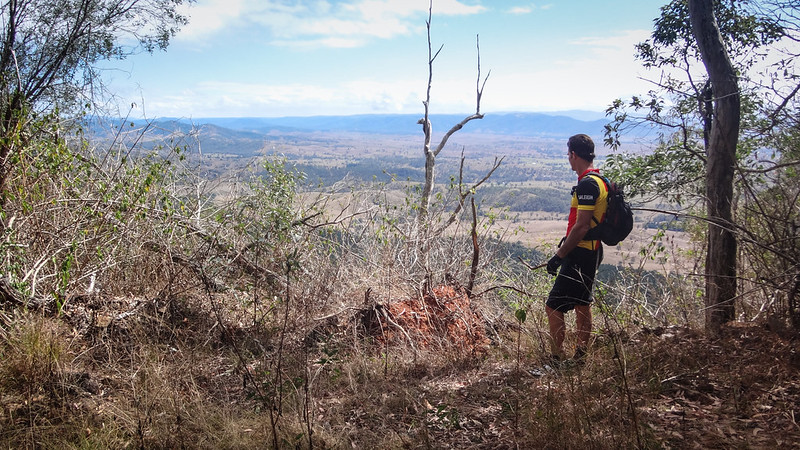 While I walked towards the western boundary of the forest, my friends cycled east over Mount McConnel. It has some great views of Kilcoy and the Conondale Range to the north.

A little further around they could see over Lake Somerset and out towards the Glasshouse Mountains (see photo at the top of this article).

Mount McConnel is named after Mary Banks’ father, David McConnel who owned Cressbrook Station and probably spent a lot of time on this mountain establishing the boundaries of his property. 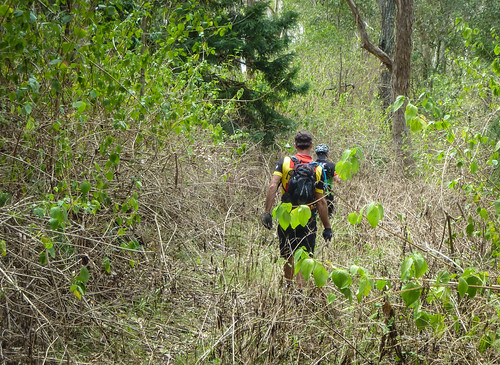 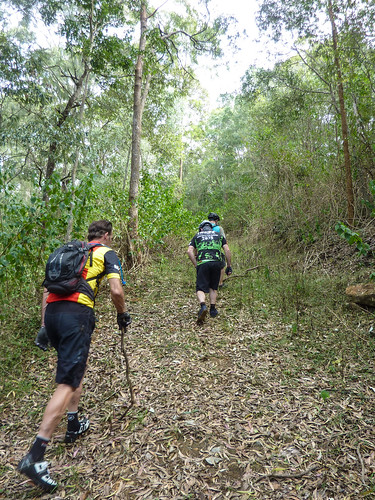 A little further west they came to the second peak – Mount Goonneringerringgi. The track was covered in lantana, so they ditched the bikes and walked a while to see if there was a good vantage point.

Unfortunately there was no view, and the riders had to scramble back up the hill.

“Goonneringerringgi” is from the Waka / Dungidau language. “Gooner – gooner – gerringi” means “Hollow Place”. It was named by surveyor Robert Austin in 1868. This land is the traditional country of the Jinbara aboriginal people, but I’m not sure what name they gave to this spot. 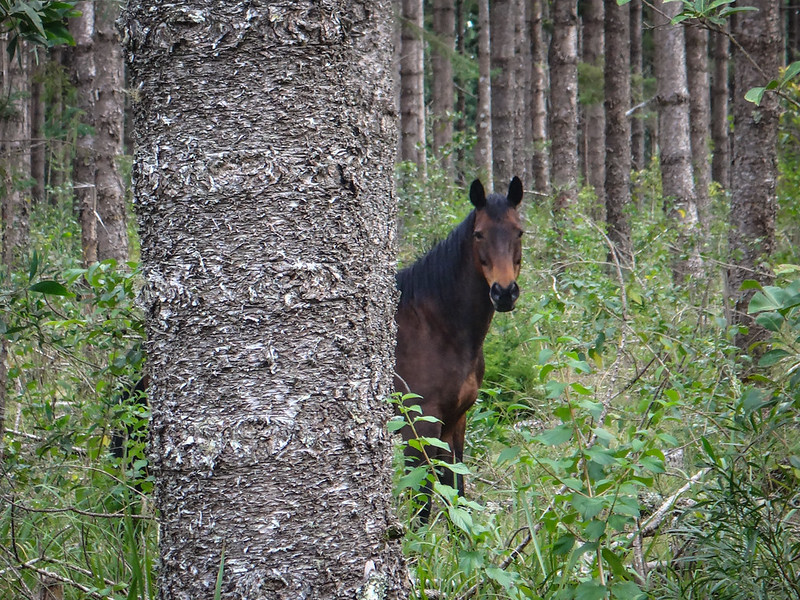 As I walked west, I spied some inquisitive eyes peeking out at me from behind the hoop pines.

I had scared off a few skittish deer as I walked, including one stag with impressive antlers. This horse wasn’t as skittish, and wandered towards me curiously as I spoke quietly to her.

It’s amazing what you find in a forest! 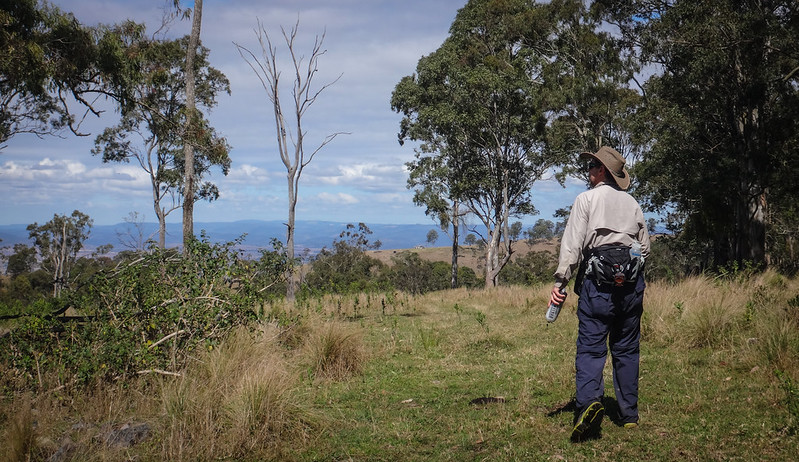 Unlike my friends in the east of the forest, I enjoyed some clear views from the western boundary.

From here I noticed a clearly marked track heading off to the west towards Toogoolawah, and noted that it might be worthwhile coming back here to see where it leads. 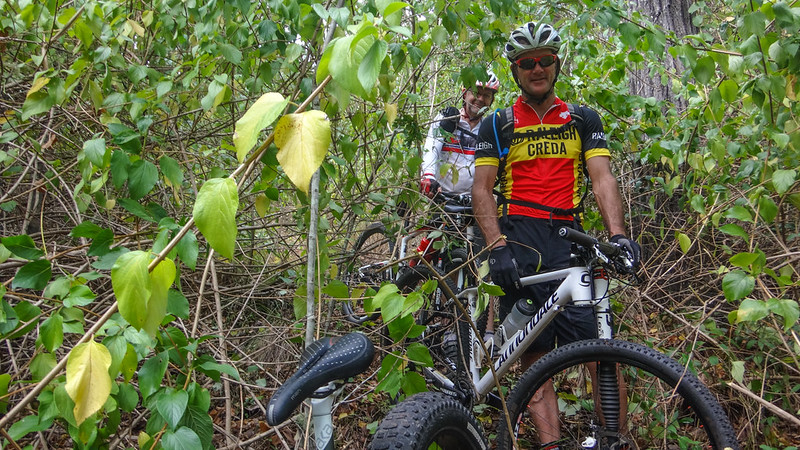 Things got worse for the riders. Their second “lookout” of the day led them through a lantana thicket. When I planned their course I had sent them down this track in the hope they could meet up with me. They had to back track and find an alternative route. Thankfully we had printed a forest map prepared by Mark Roberts from Where to Mountain Bike in South East Queensland.

This highlighted for me the importance of carrying a paper map even when you do have a GPS with internal maps. There were no alternate tracks in the GPS maps. If we hadn’t printed this map, it would have been difficult for the riders to find another route.

Darb called me on the phone and explained their predicament. Rather than wait for them up top, I decided to turn around and head back through the hoop pines to the car. 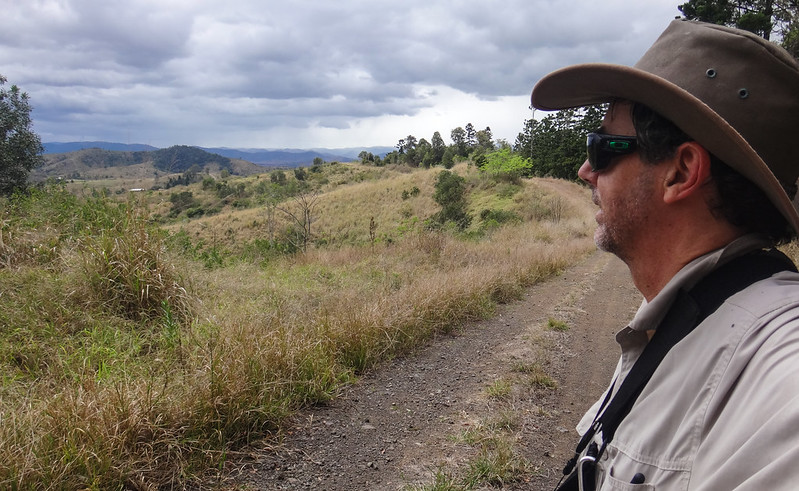 On the way down I enjoyed some great views to the north and west. 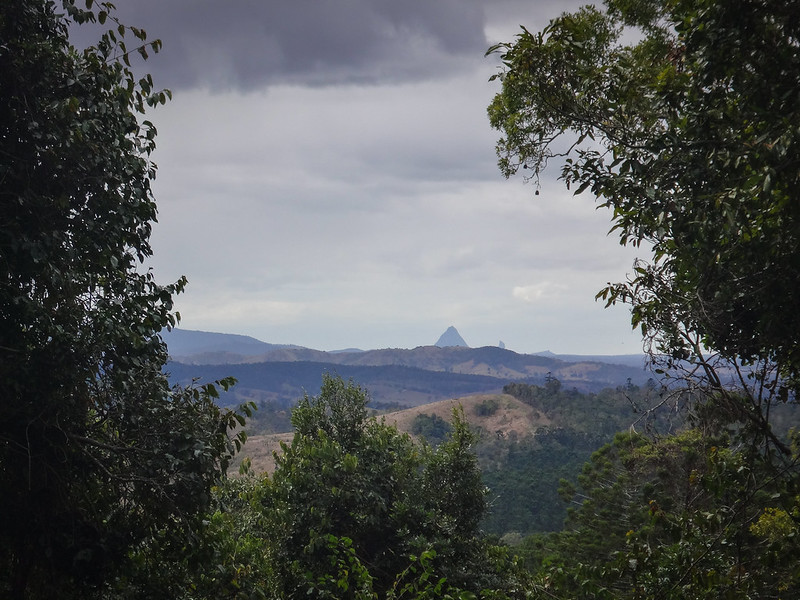 I even managed a few quick glimpses of Mounts Beerwah and Coonowrin to the east. 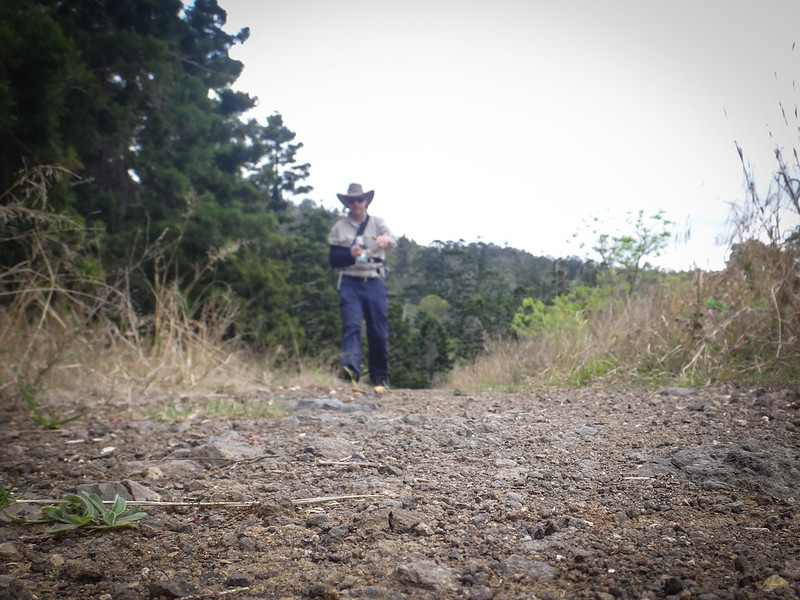 Unlike riding downhill on a mountain bike, I find walking downhill painful at times. Unable to free-wheel downwards, my knees had to take the impact of each downward step. 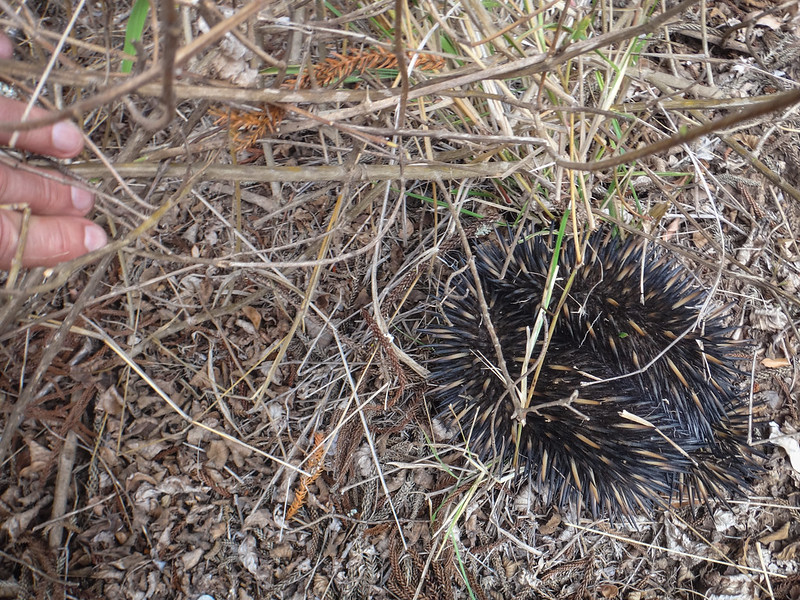 Like an extra-terrestrial creature from a Star-Trek episode this Echidna scuttled in front of me, then curled up into a ball of prickly spines when I tried to get a closer look. Believe it or not, there is an animal in there somewhere! 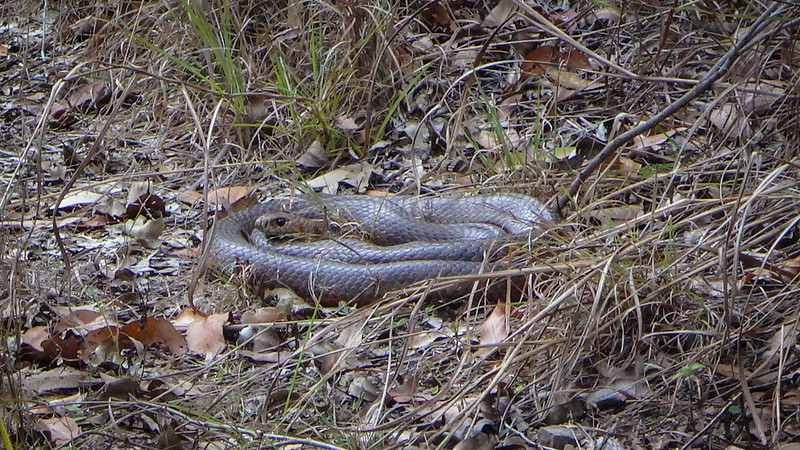 Not to be out-done, my mountain biking mates came across this huge Brown Snake, curled up in the sun. Russel said he thought he could see the tell-tale “bump” of a large meal that the snake was digesting. 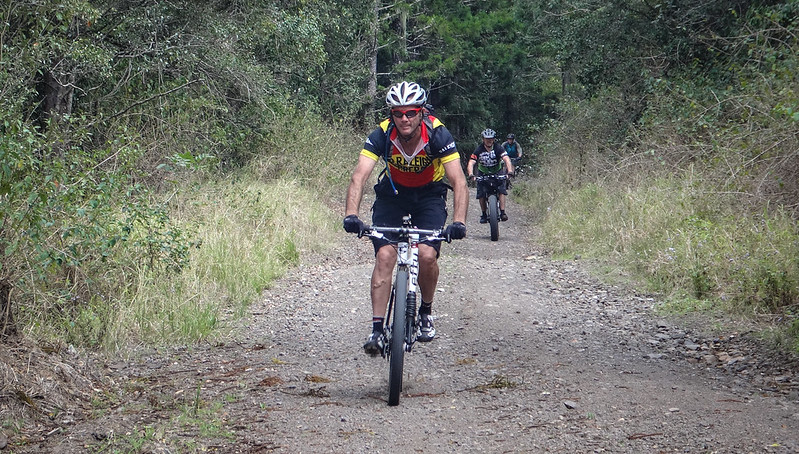 At the bottom of the hill, I rested my weary legs and waited for my friends to show up.

It wasn’t long before I heard the familiar crunch of gravel is they approached on their bikes. 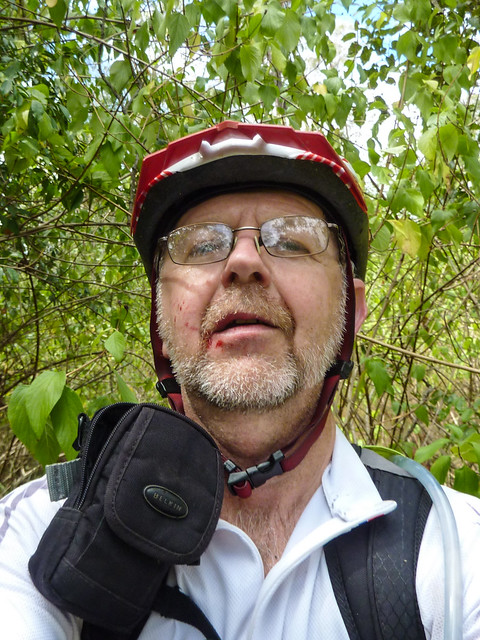 Their faces were cut-up from the lantana.

Although we had planned a second shorter loop through some of the other sections of the forest, we had a vote and decided it might be more fun to have a couple of beers in Kilcoy instead. 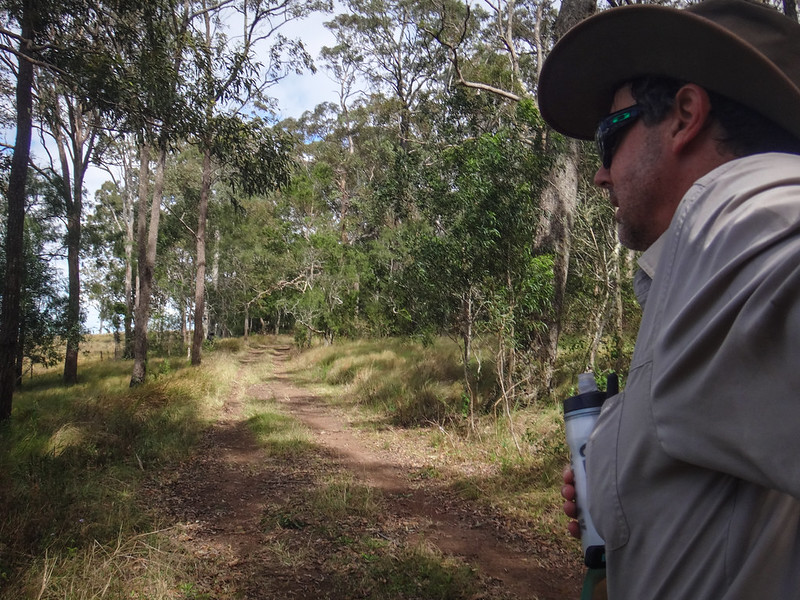 There are more places to explore here. I’d like to come back soon.

I hiked about 11km in just under 4 hours including breaks.

The riders covered about 24 km in just over 4 hours, including breaks.

Whatever way you do it, remember that it’s remote and rough. Bring plenty of water and snacks, and don’t forget a paper map. Some of those trails can become quickly overgrown.

Thanks Darb, Jason, Russel and Jason for letting me join you on this adventure.

And thanks Darb and Russel for sharing your excellent photos.