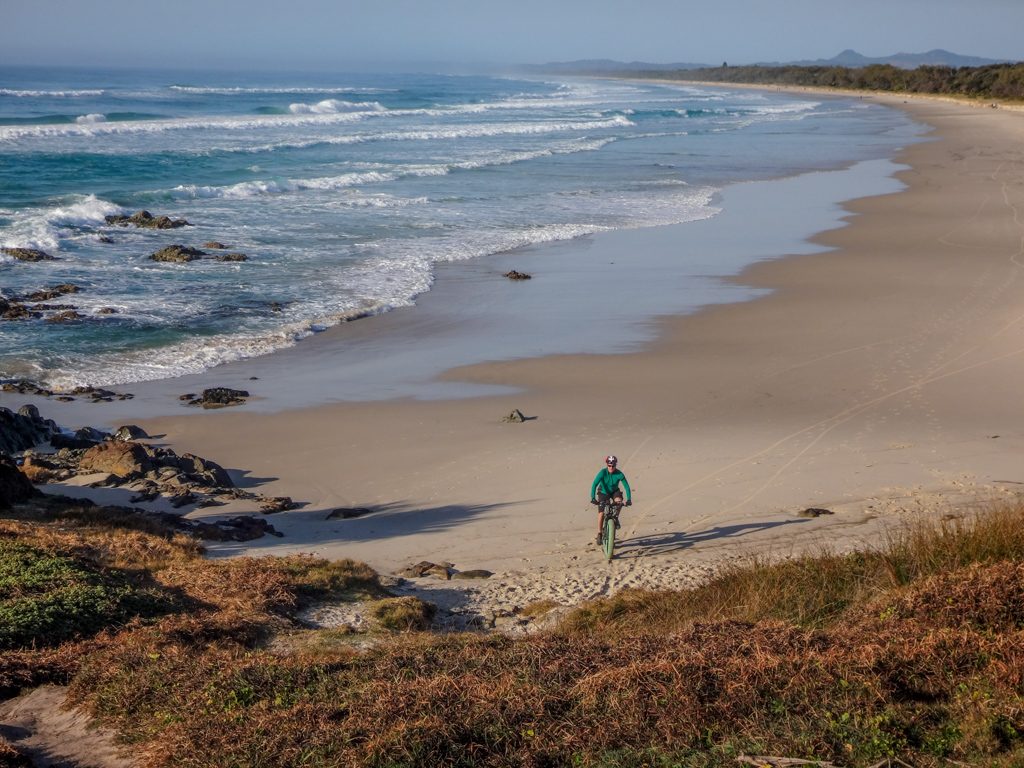 “Can you ride from Tweed Heads to Byron Bay on the beach?”

Darb and I talked about this one day and decided it was a bit far to do it in one day.  But if we stayed at Pottsville overnight it would be possible to do it over two days. 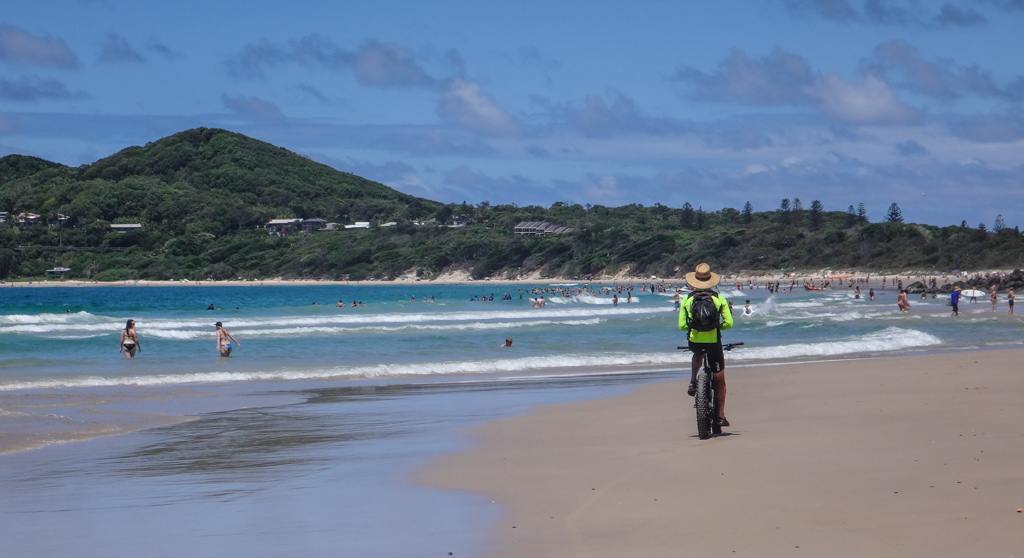 It’s easy to overheat when we ride our bikes on long hot summer days. That’s why I was quick to say “yes” when Jason invited us to join him for a ride on the beach at beautiful Byron Bay.
END_OF_DOCUMENT_TOKEN_TO_BE_REPLACED

Today’s adventure took us from the picturesque village of Tyalgum in Northern NSW, up to the edge of the crater surrounding Mount Warning, and then back to our starting point via Mount Burrell and Mebbin National Park.
END_OF_DOCUMENT_TOKEN_TO_BE_REPLACED

This unusual ride took us from Running Creek near Rathdowney, over the Border Ranges to the Richmond River, and then back over the range to our starting point.

I have wanted to do this course for a long time because it closes a large gap in my Ride Network between Rathdowney and the Border Ranges. This “missing link” now completes an unbroken line of riding routes which stretches from Kyogle in Northern NSW all the way up to Rainbow Beach on the Fraser Coast and out as far as the Bunya Mountains.
END_OF_DOCUMENT_TOKEN_TO_BE_REPLACED 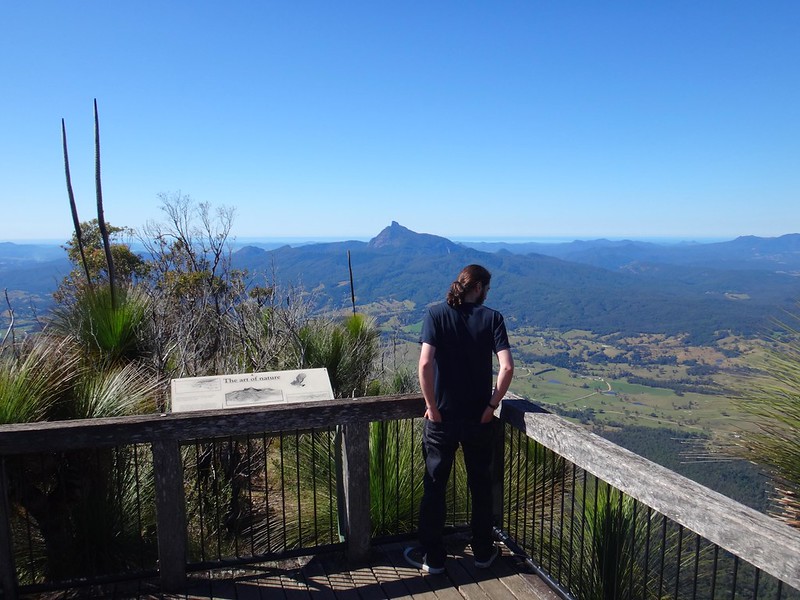 I’ve cycled through the Border Ranges a couple of times with friends. Both times it was raining, so we didn’t really get to see it at its best. So today I thought I’d take advantage of the recent run of specatcularly clear days and drove there for the day with my son, Jonathan.

While not being able to ride a bike for a few months has its disadvantages, there was one advantage – we had a lot more time during the day to stop and enjoy the views. 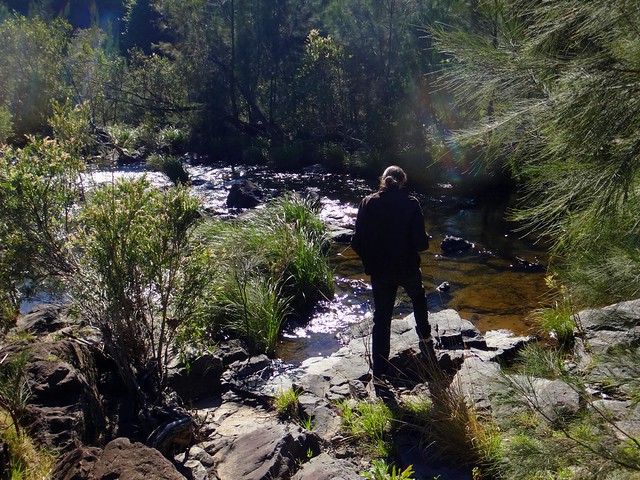 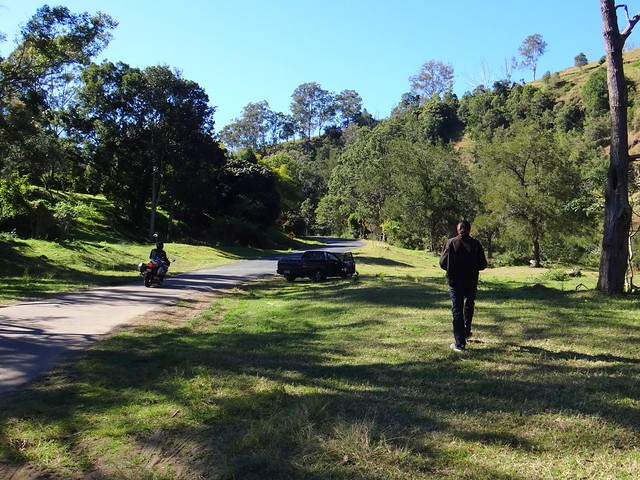 “The further south you go, the better it gets”, I said to Jonno as we drove south from Beaudesert. Just near of the border, along the Lions Road, we arrived at Running Creek. The road here crosses this pretty creek several times. It’s difficult to enjoy the view while driving, so we decided to get out and have a quick look around. 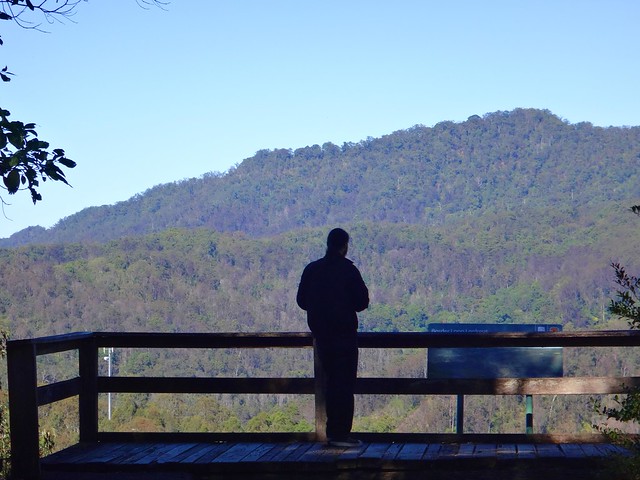 The interstate railway line crosses the range here via an unusual arrangement of loops and tunnels that were constructed about a century ago. We were able to look down on the system from the “Border Loop” Lookout. 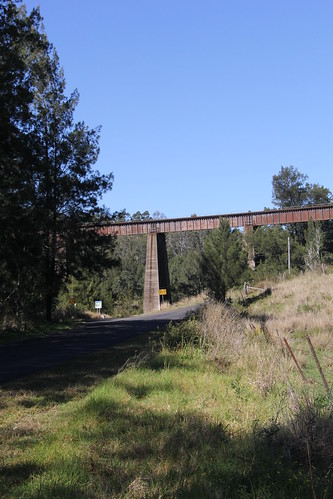 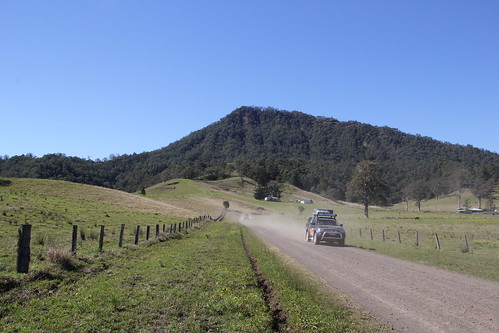 Our route meandered over more creeks and under several railway bridges until we eventually turned off onto the Gravel at Simes Road. 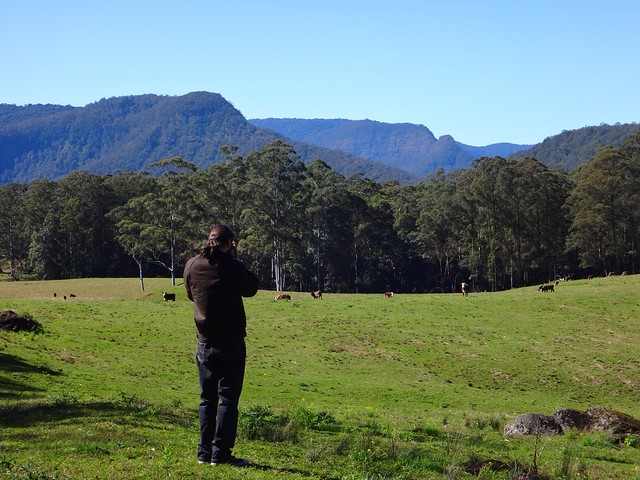 One of the joys of revisiting a special place is bringing someone who’s never been there before. Jonathan was stunned by the beauty and kept wanting to stop and take pics. I was happy to oblige. 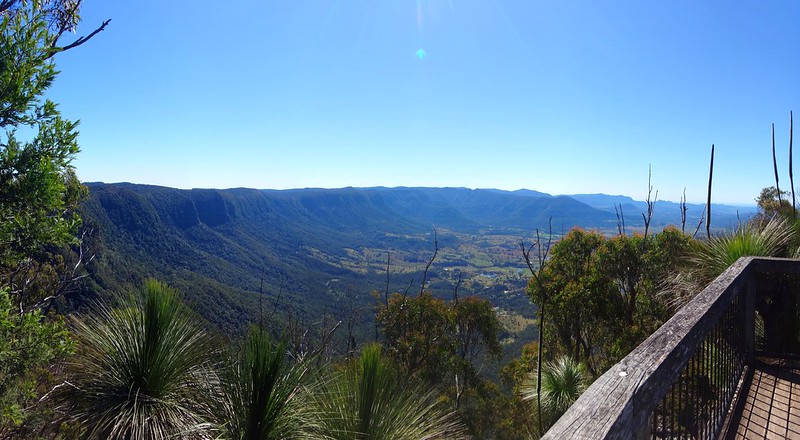 We eventually arrived at “The Pinnacle” lookout after a long slow drive up the mountain. The last time I was here it was so cloudy and wet you could see nothing.

Today the beauty was overwhelming. 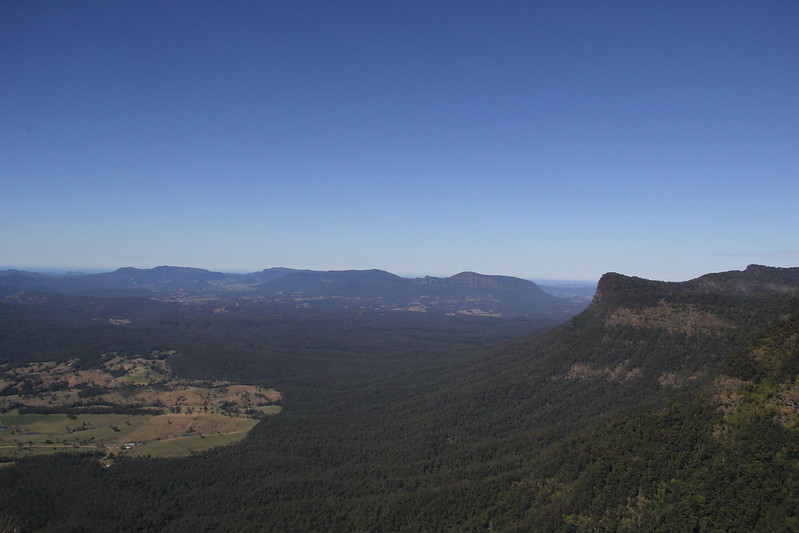 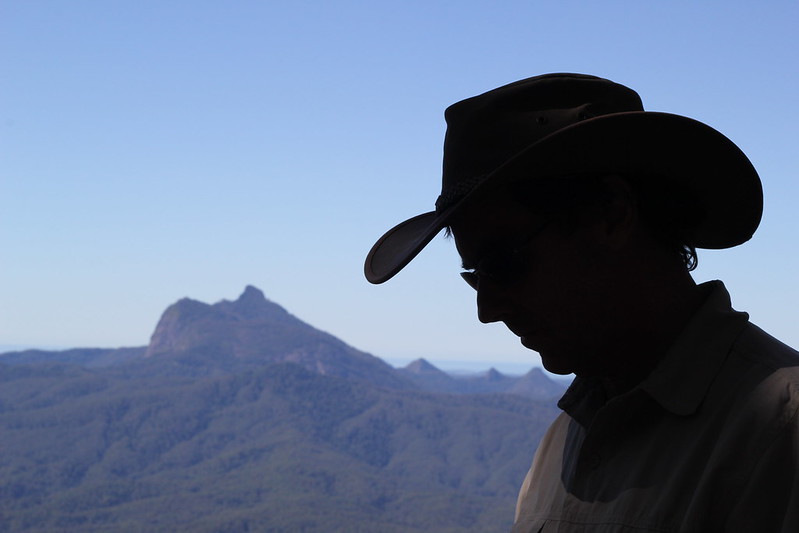 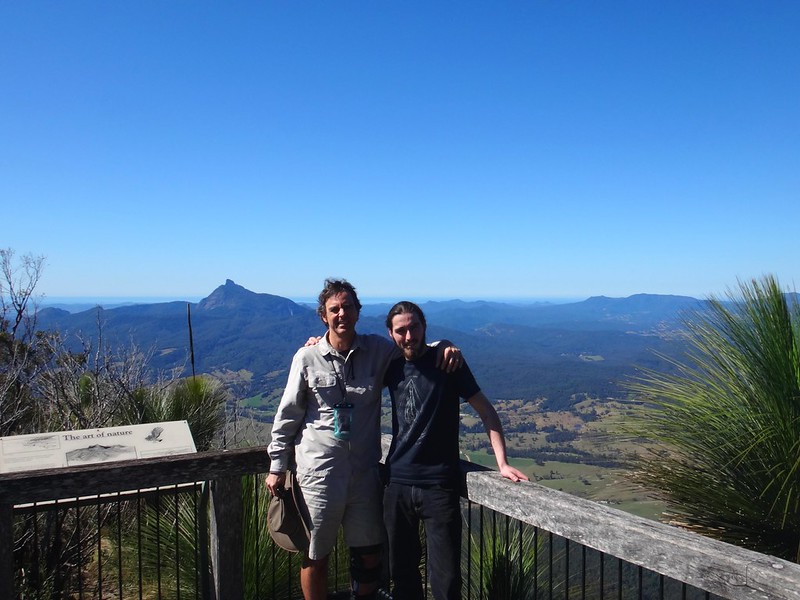 To quote John Williamson…. “You know, some people never see such things…” (The Cootamundra Wattle) 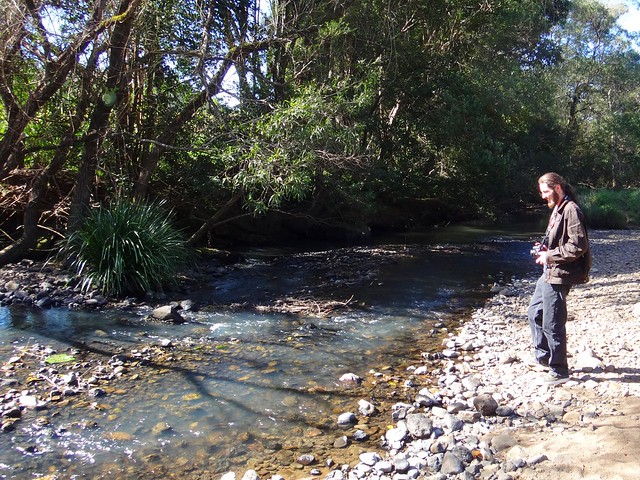 After carefully making our way down the other side of the range, we slowly made our way into Mount Burrell, in the upper reaches Tweed Valley. Believe it or not, this little stream is the Tweed River. 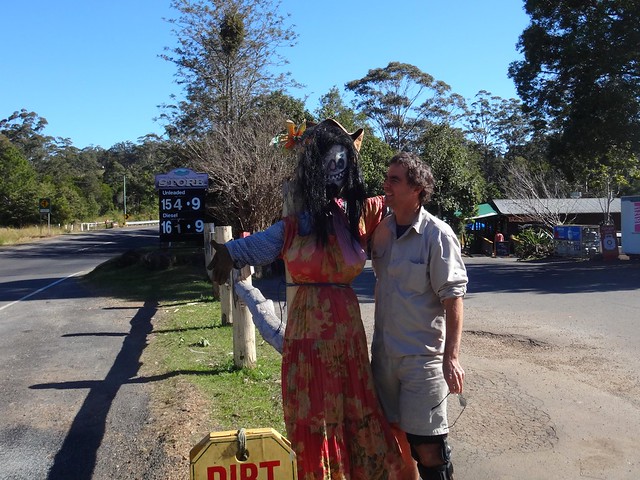 We found thls lady by the side of the road. She kindly posed for a photo with me but didn’t say much.

If you want to see some of the best scenery in South-East Queensland and Northern NSW in one day, I’d thoroughly recommend this drive. We drove a total of about 420km in just over 7 hours. I used most of a full tank of fuel.

Thanks Jonathan, for sharing it with me.

Oh – and thanks to my neighbor, Mike, who let me take his Holden Ute so far from home!

Here’s Tony’s video of our ride through the Border Ranges yesterday, including my wimpy attempt at crossing Horseshoe Creek. 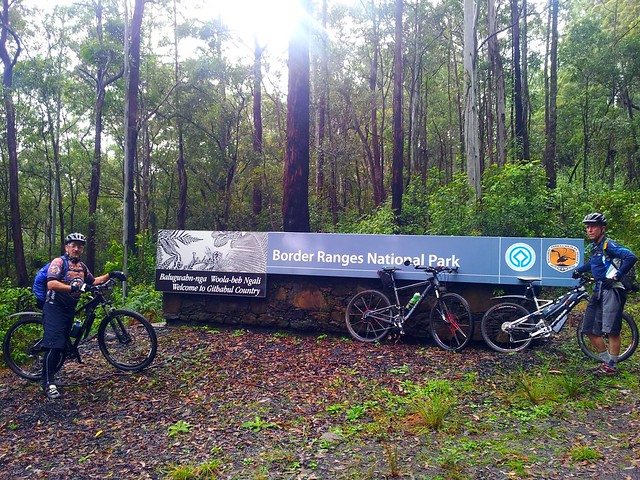 A few weeks ago some friends and I had to cut short our ride through the Border Ranges National Park because of our late start and slow progress.

Today Eric, Darb and I gave it another try.

We arrived at the starting point at about 8:30am after a two and a half hour drive from Brisbane, and immediately started the long climb up into the National Park.

Normally, this ride has some amazing views. Rising over 1,100 meters, some of the lookouts are perched atop shear drops, and let you see forever in every direction. The clouds, mist and rain made that impossible today, but it was still a wonderful experience riding through the lush rainforest.

The rain also made it impossible to take photos. My camera is out of action, so all I had was my mobile phone which doesn’t handle moisture too well. Thankfully, Darb was able to capture the high points of the ride on his Contour video camera. Here’s a link to his video of it.

The challenging thing about this route is that apart from three fast descents, we were climbing for almost 35km, which took us about three and a half hours. All the while, it was raining, and the temperature was hovering around 11C. So it was hard work.

Eric and Darb are strong hill climbers. I found it impossible to keep up with them on the long ascents, and was thankful they stopped several times to help me catch up.

The fast descents were exhillarating though. Shooting down a dirt track at about 40 km/h with fogged up mud-covered glasses, and chill breezes cutting through rain-soaked clothes really makes you feel alive – and cold 🙂 I was glad I added a couple of Snickers Bars to my normal stash of food – they helped to warm me up again.

The final descent out of the National Park is awesome. We dropped 1,000 metres of altitude in just over 10km. That’s the longest descent I’ve ever done.

Normally on a run like this my brakes would overheat, and I’d end up losing them. This time my local bike shop had installed an 8″ brake rotor on the front, and a 7″ rotor on the back. They handled the descent with ease. My brakes didn’t fade at all. Thank you, Sam from Strathpine Bicycle Centre!

Once we left the park, we took a detour through some private property. I had been in touch with a local land owner who said he didn’t mind us riding down through his property to Horseshoe Creek. This was another fun descent down a steep boggy 4wd track with a couple of dozen water bars.

At the bottom of the boggy track, with the bikes covered in mud, we had to cross a flooded Horseshoe Creek. Eric just lifted his bike above his head and waded across in the knee-deep water. I pussy-footed around trying to hop across the rocks and keep my feet dry. In the end, Eric took pity on me, waded back into the water and grabbed my bike, while I finished crossing the creek. My efforts were to no avail – my feet were soaked despite wearing plastic feezer bags over my socks.

The creek was a good spot to wash the mud off the bikes and start the second half of the trip through the much flatter farmland in the valley below the ranges.

(© State of New South Wales through the Department of Education and Training)
In order to fit the ride into one day, we decided to leave out riding into the small town of Kyogle. This saved us about 45 minutes, but it also meant that there wasn’t any place we could stock up on water if we needed it. In the preceding week I got in touch with the teacher at Collins Creek Public School who kindly agreed to let us pop into the school grounds and fill up on water if we needed it. It was a beautiful little school surrounded by farmland, and it in just the right spot for us.

For me, the toughest part of the ride was the final two kilometers. With the end of the day seamingly in sight, and 80 tough kilometers on our legs, the road became suddenly steeper, and we had to grind our way up the hill back to the car.

Doing this ride in cold wet weather and having to drive two and a half hours each way to get there definitely rates this one 10 out of 10 on the tough-o-meter.