Soaking up the splendour of the hills around the Western Branch of the Brisbane River today, I wondered whether I have had more than my fair share of good fortune. 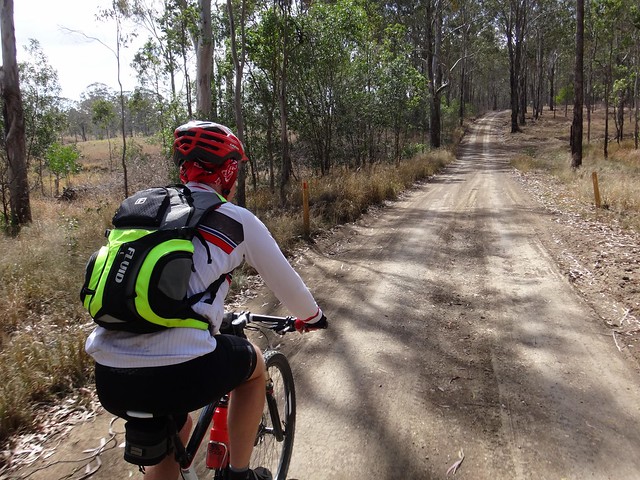 I had a flimsy reason for coming back to Nanango. There was a 400 metre gap in my Ride Network Map which happened when we parked the car in the wrong spot during our fateful adventure among the Lantana a few weeks ago. When we failed to complete that loop it left a gap in my map, which I wanted to complete. Russel kindly agreed to indulge my obsession. 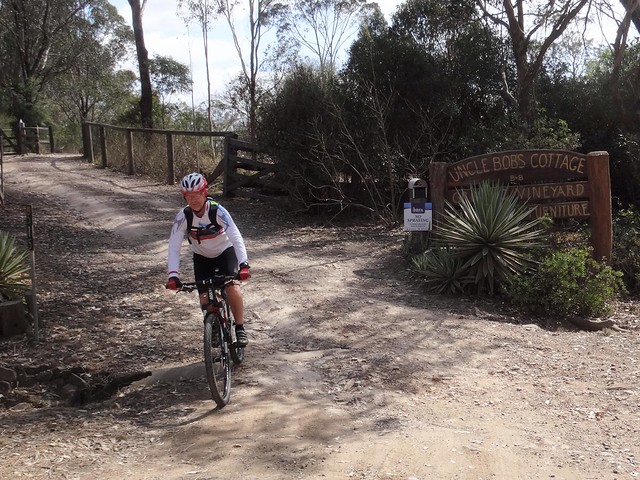 We parked the car at “Uncle Bobs Cottage” – a delightful B&B / Winery in East Nanango. I met the owners, Rod and Celia Price about a year or so ago when Eric and I stayed there prior to our ride from there to Jimna. They kindly agreed to let me park the car in their front yard for the day. 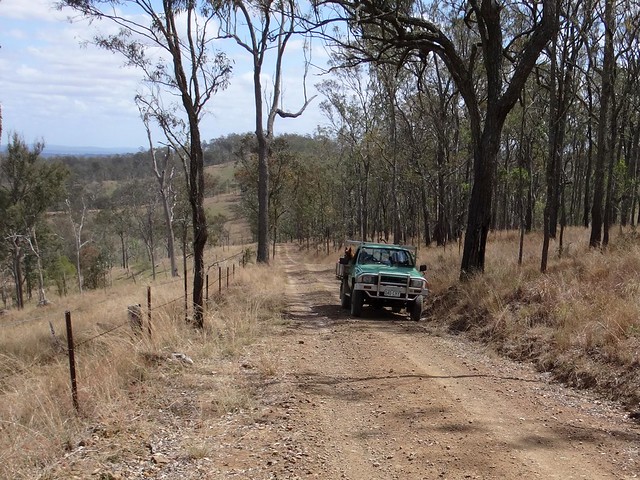 After bouncing along some bumpy forestry tracks for about an hour we encountered an old green ute grinding up the hill towards us. 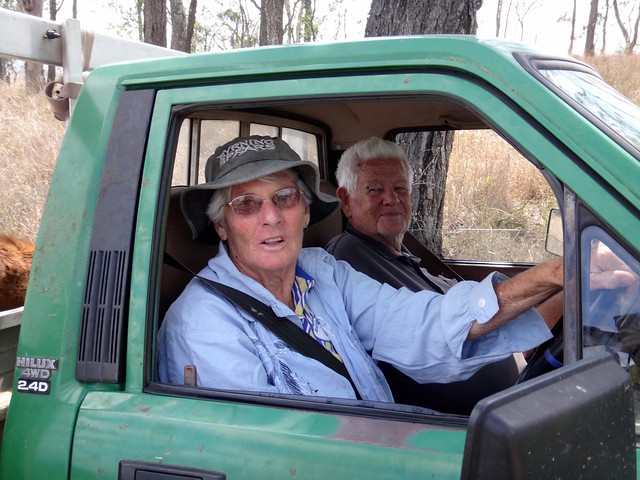 “How ya goin?” I greeted Ivy and Sam as they pulled up.

“I hope you didn’t mind me taking your picture while I was riding towards you” I said.

“Ah, is THAT what you were doing!”, Ivy replied while Sam grinned at me from the passenger seat.

I must have been an amusing sight: a crazy bloke on a bike poking a camera in their face as they drove by.

“Have you got cattle up here?” I asked.

“Yes”, replied Ivy in her warm rural Queensland drawl, “we’ve come here to check up on our cattle, poor things.”

Rain has been scarce around here for months. The grass is dry, dams are empty, cattle are hungry, and good farmers like Ivy and Sam are worried about their livestock. 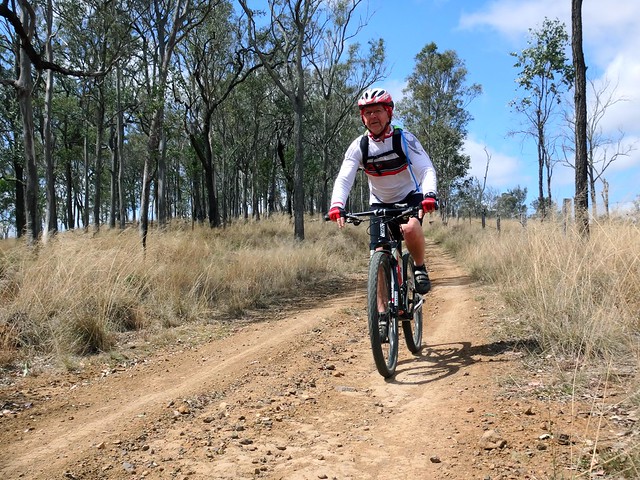 After a few more pleasantries, Russel and I left our new friends and let our bikes shoot down the steep dirt hills of Mount Stanley Road. 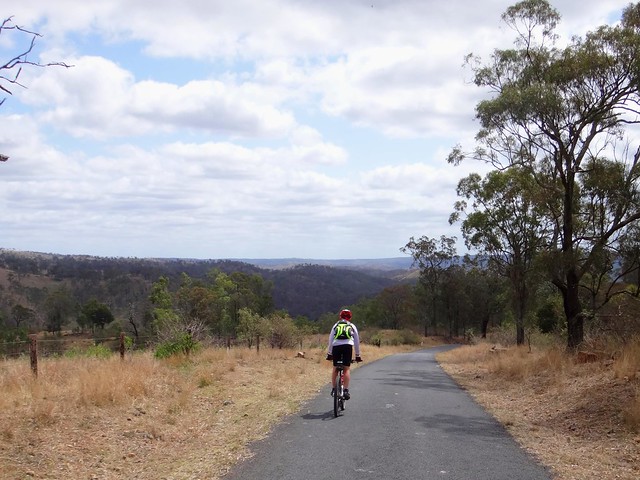 As it drops to the valley, this road becomes very steep. 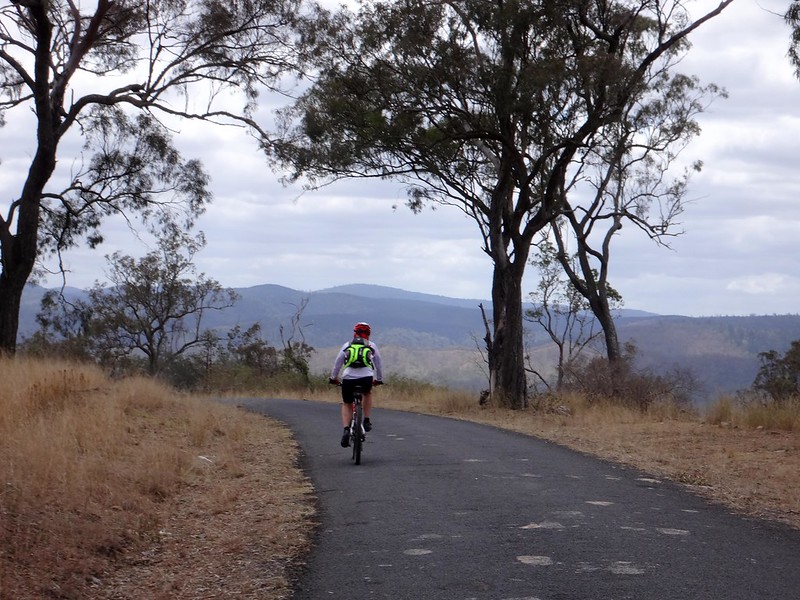 The rolling hills of the Conondale Range to the east caught my eye, but the bike was rolling so quickly down the slope that I had to concentrate on the road in front of me. 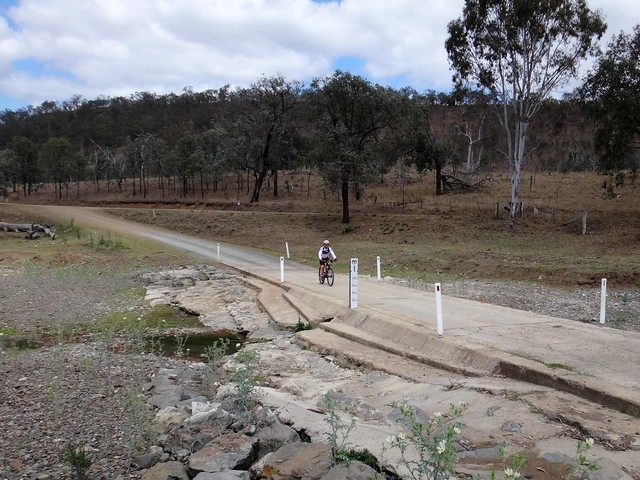 The river at the bottom is dry. 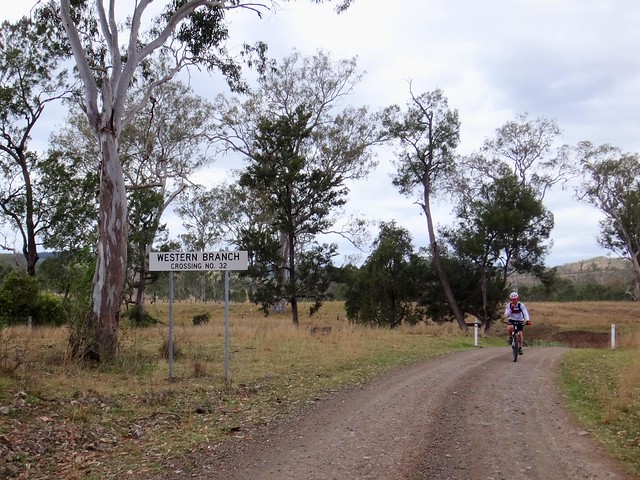 We bobbed up and down over numerous crossings of the “Western Branch” of the Brisbane River. The last one was Crossing No. 37. We were a long way from Fisherman Islands at the mouth of this river, a couple of hundred kilometres to the south-east. 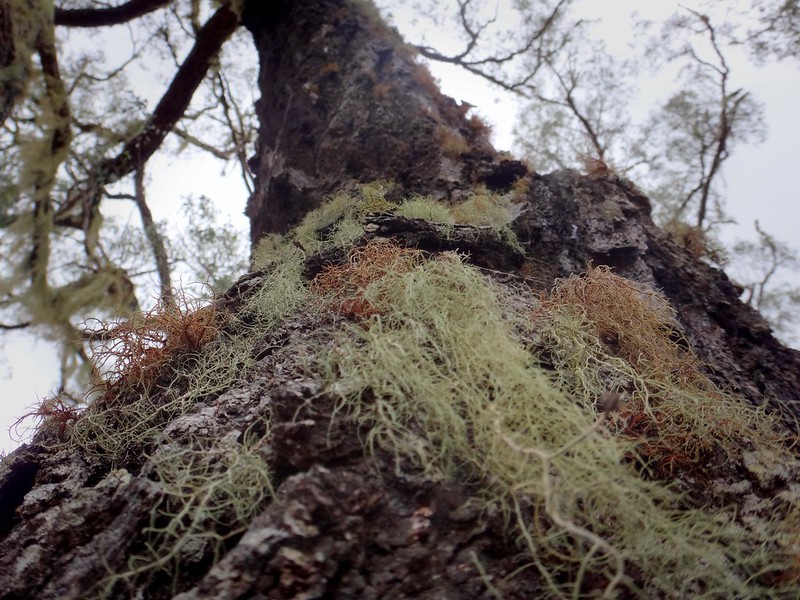 We stopped for a quick break under a moss-covered Ironbark. Most of the old trees here are festooned with the khaki colored moss. Russel and I surmised that they only way the moss could survive would be from the moisture in early morning mist. There certainly wasn’t enough rainfall to water them.

The wizened old black trunks of Ironbarks poking out of dry grass reminded me of a Jackson Pollock painting. Perhaps if he had visited Western Branch, Pollock might have painted “Brown Poles” instead? 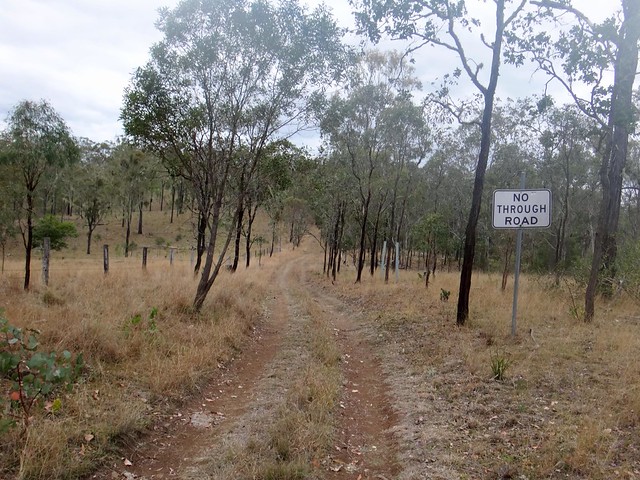 Before reaching the end of Western Branch Road, I noticed some tyre tracks leading off to the east. I’ve got a feeling if we followed these we might end up somewhere in Elgin Vale State Forest. What do you think, Eric? How about we follow this road some time, and see where we end up? 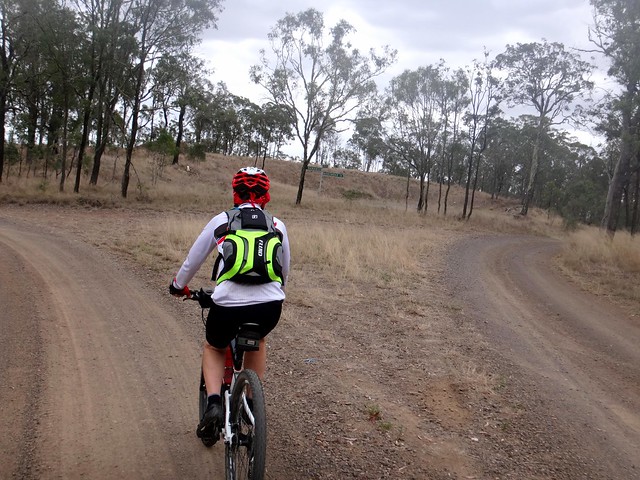 Eventually we reached a dusty intersection in the middle of nowhere. Our GPS told us to turn left 🙂 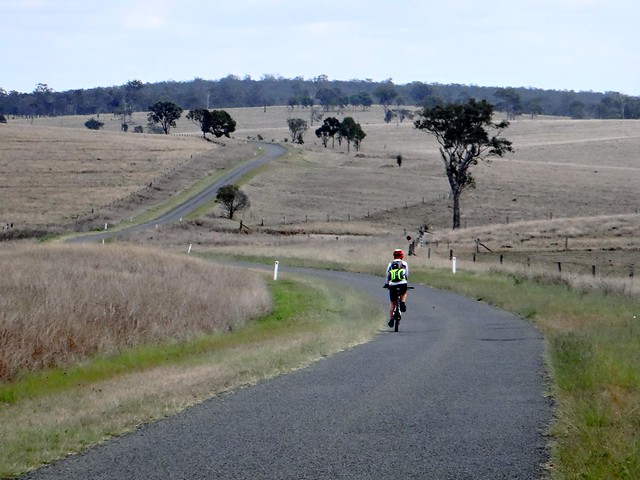 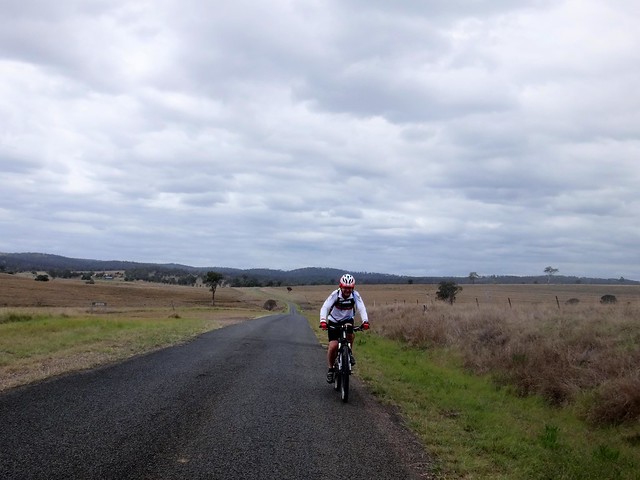 The wide plains along Manumbar Road are good for the soul. As I gazed at distant horizons under cool fluffy clouds, I grinned and realized I didn’t want to be anywhere else. Riding here was just fine. 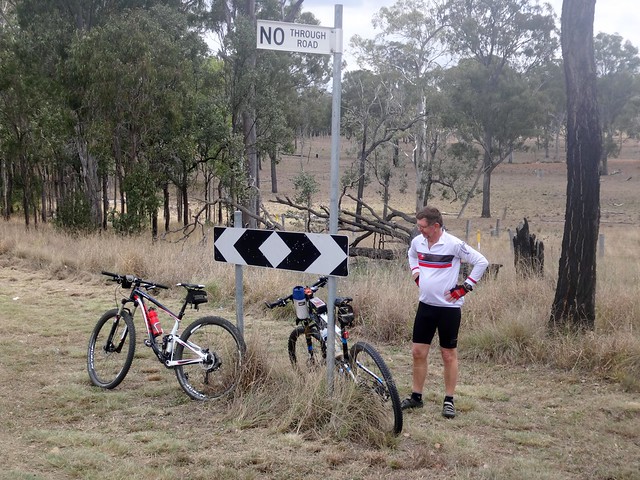 We stopped for another quick break under a shady tree. The short stint along Manumbar Road had boosted our pace: we were well ahead of our schedule. 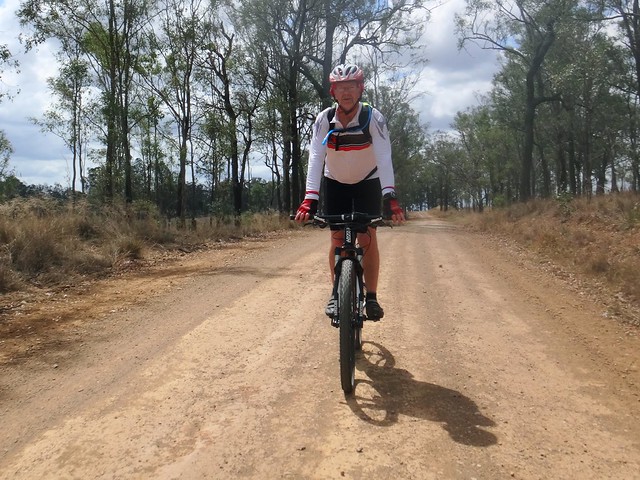 From there we followed Walshes Road southwards towards our starting point. 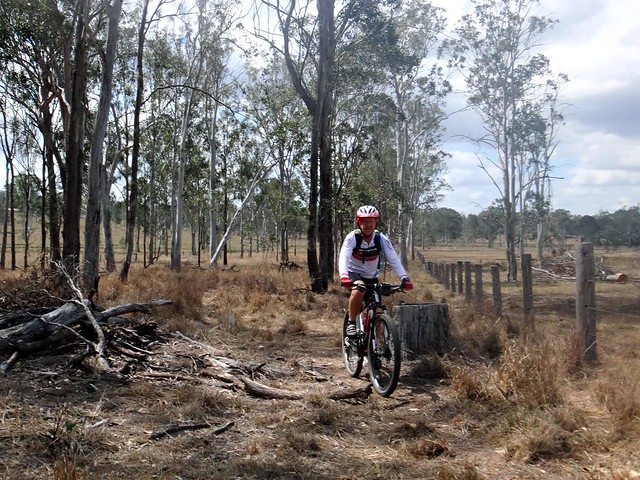 The only problem was that the road ran out. As sometimes happens, the map said there was a road, but when we arrived we found a rough stock route instead. 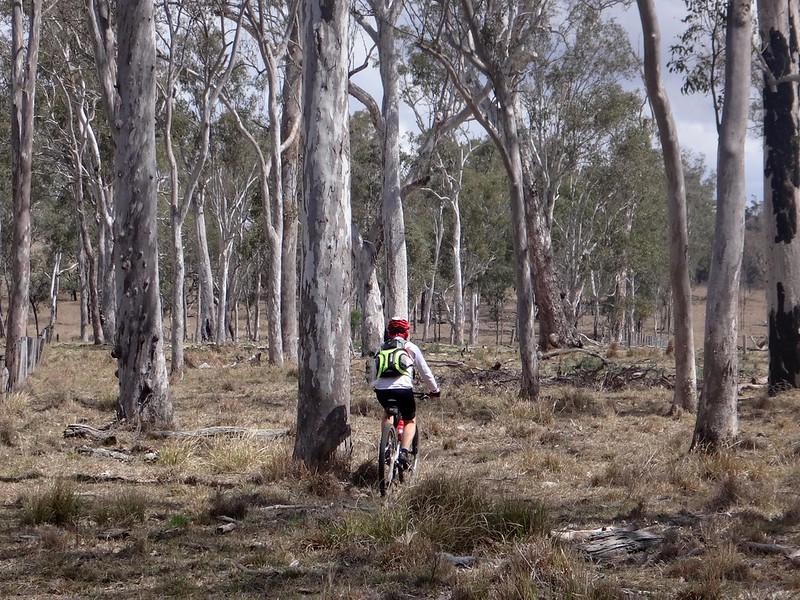 So we dodged the trees, ditches and logs as we followed a couple of faint tyre tracks home – perfect! 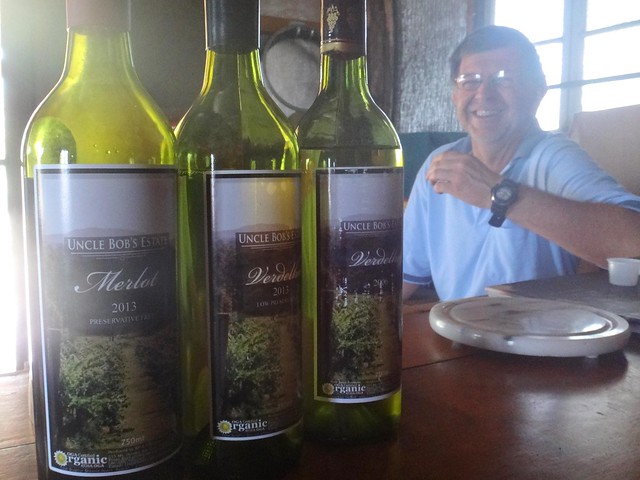 When we got back, our friend Rod asked if we’d like to sample some of his wine.

We didn’t need much convincing.

Uncle Bobs Estate makes organically grown preservative-free (and low-preservative) wines. We got to sample some Verdelho, Merlot and Cabernet. They were delicious. My only complaint was that I couldn’t sample more than a couple of mouthfuls because I had to drive home. Perhaps next time we should stay at the B&B here? 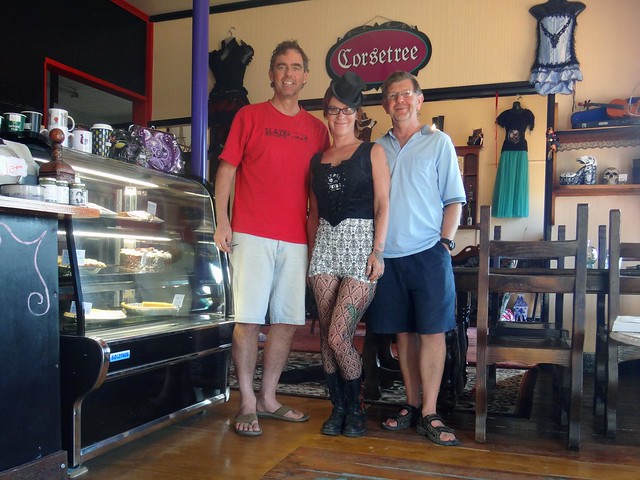 As a perfect epicurean end to a great day, we stopped at Vagabonds Cafe and Corsetree in Moore.

Laine, sells the best coffee, cakes and corsets for a hundred miles. What a delightful idea for a shop!

As I wolfed down a divine apple pie with cream and a coffee, I asked Laine, “Do you make them?”

“No, I make them happen!” she replied.

The next time we pass through Moore, I’m definitely stopping here!

We rode 68km in just over 5 hours, including breaks.

I’ll rate this one 7 out of 10 on the tough-o-meter. It would be more difficult in hot weather and spectacular after rain.

Thanks, Russel, for a great day out. 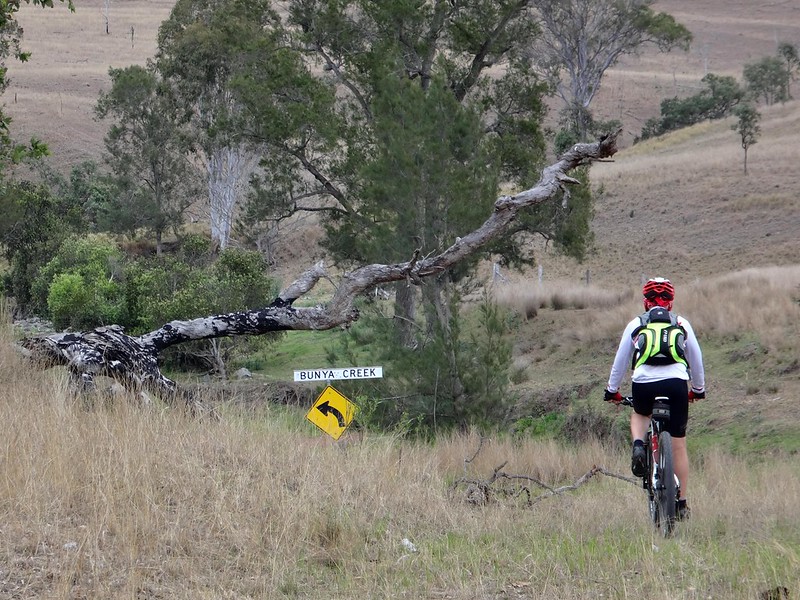