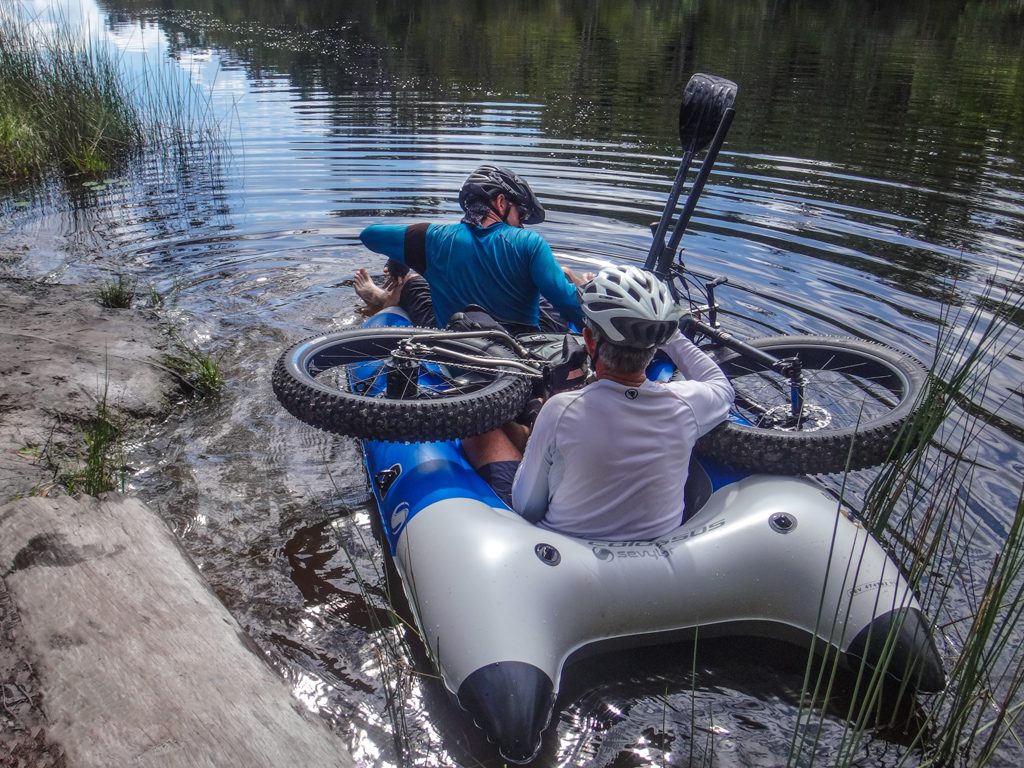 Sometimes a river stands between us and where we want to ride. When there’s no bridge, and no ferry, there’s only one solution:  Bring your own inflatable boat. 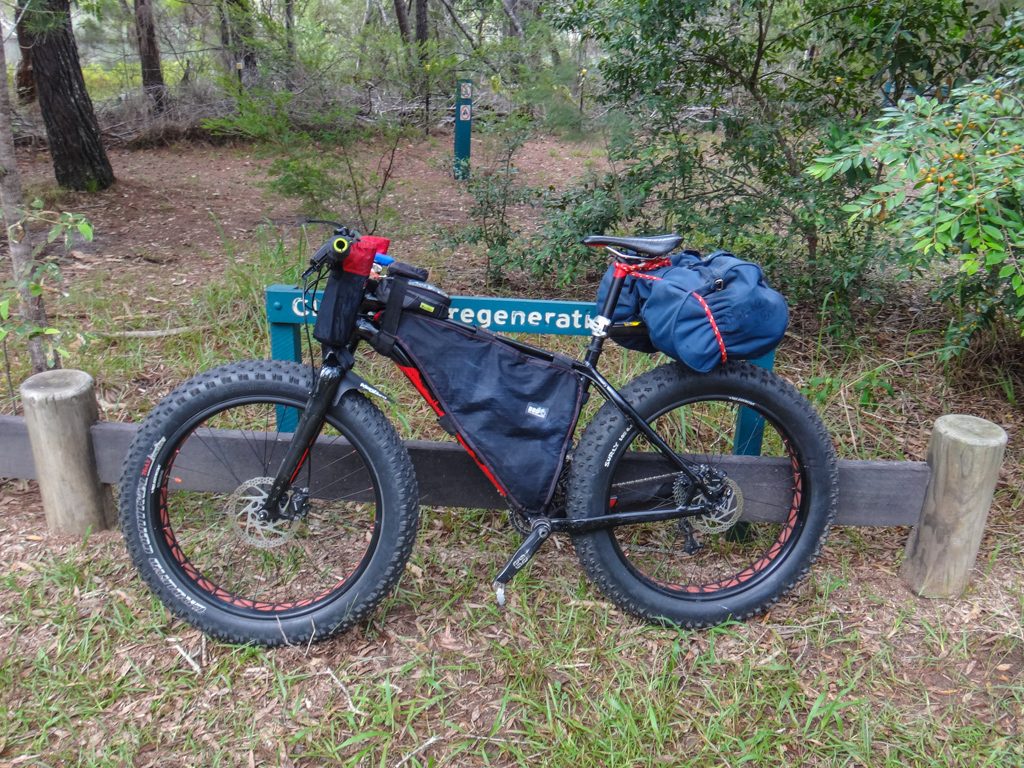 The remote wilderness of the Upper Noosa River is spectacular.

We packed boat, oars and pump on “beam rack” carriers behind the bikes, and set off into the wild.

We followed the Noosa River north for a few kilometres through thick paperbark forests.  We’d come this way several times before, but this time our plans were slightly different. 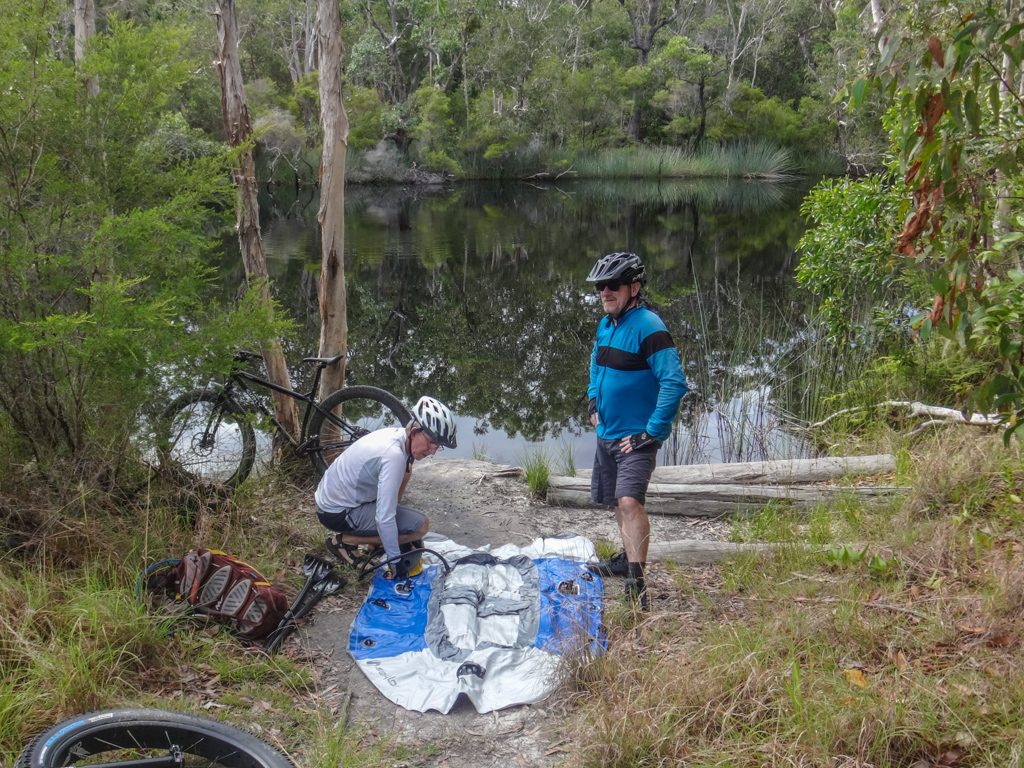 At a small cleared patch by the river bank we laid out the 3-man boat and started pumping. 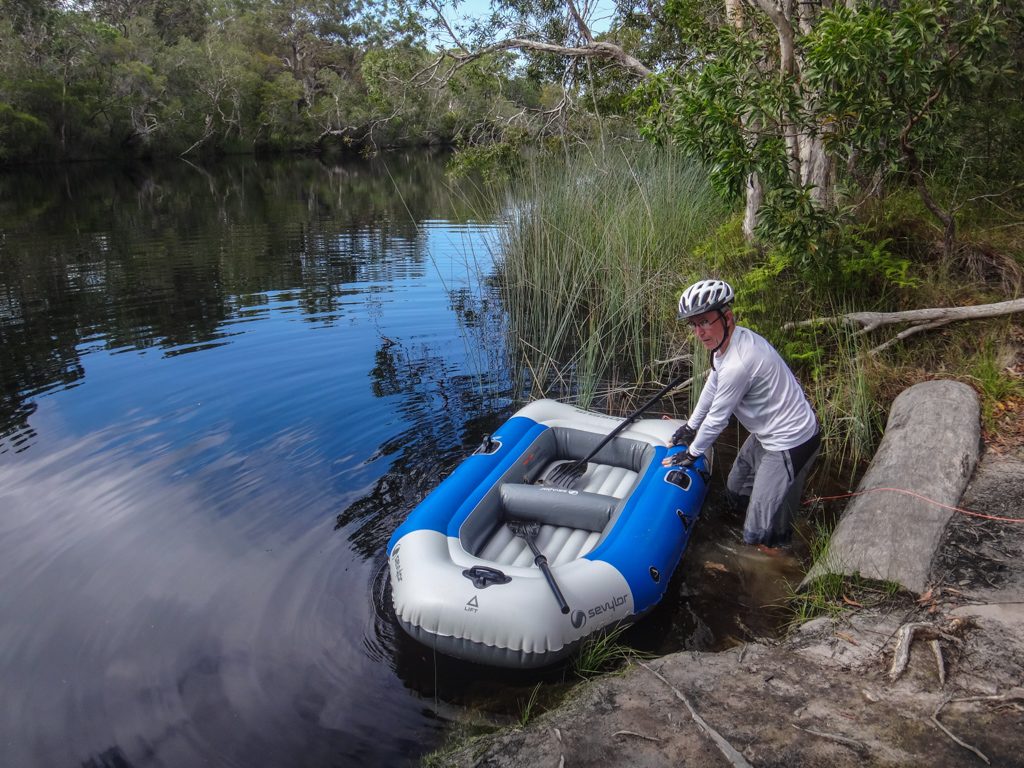 Eric and I had used this boat before, carrying the two of us, and both our bikes.  But this time we had heavier fat bikes.  We had to alter our plan slightly. 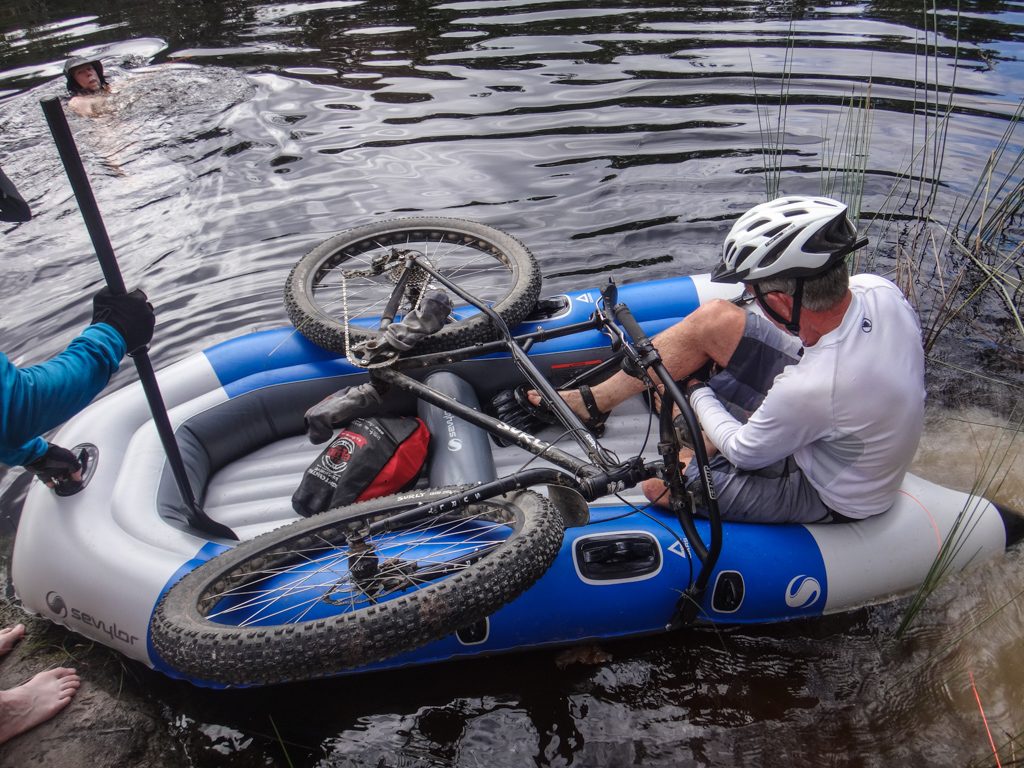 Rather than carry two bikes and people, we decided to keep the cargo to one bike, with passengers fore and aft. 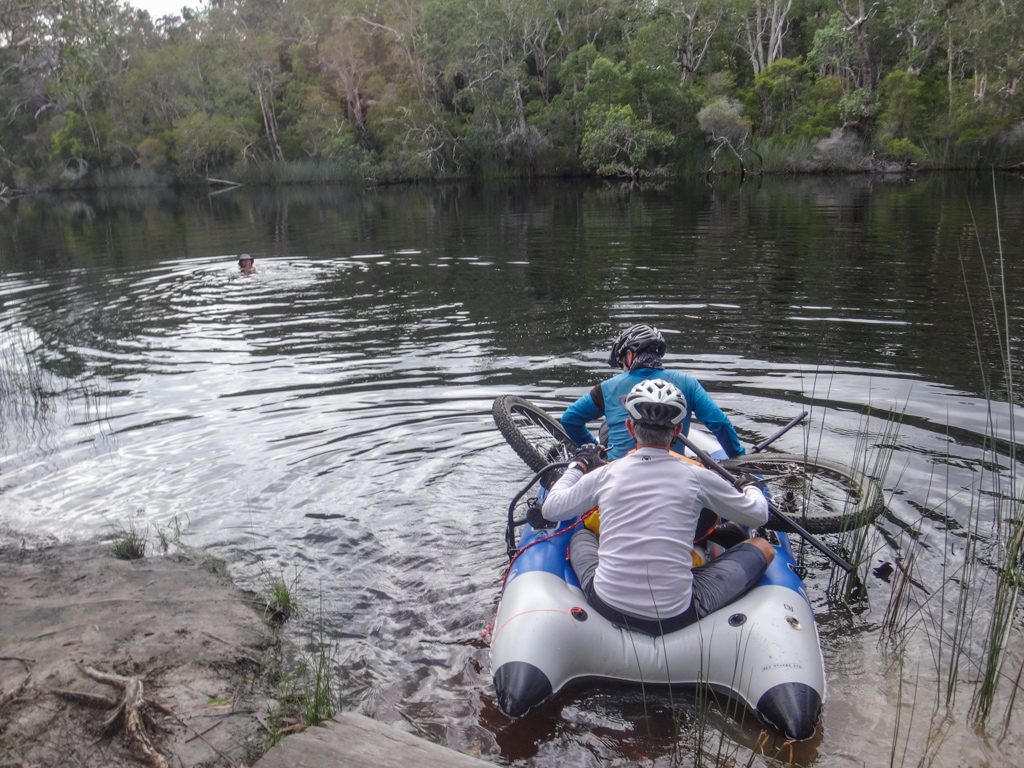 I attached a string to the rear of the boat.  Perhaps this would make it easier on the return leg if I pulled the string while someone else paddled?

We looked odd.  Jason swam ahead.  Darb and Eric clumsily paddled the boat.  I hang on to the spool of string like I was fishing and had caught a huge fish. 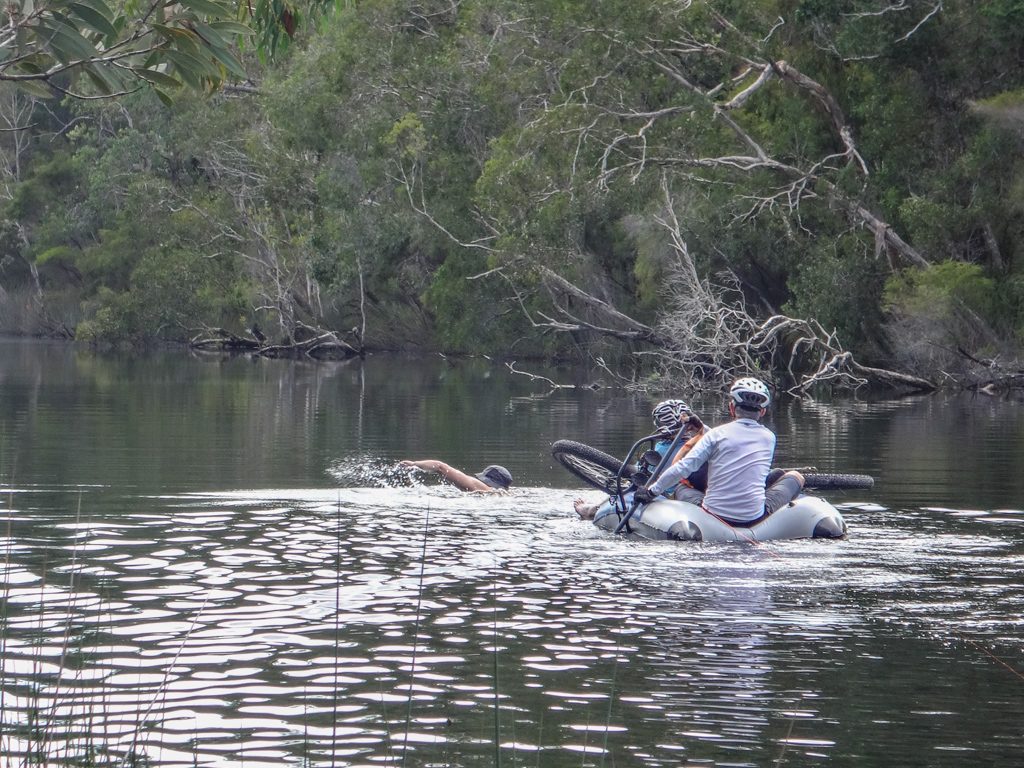 The problem was I had 200 metres of string, and the landing point on the other side of the river was 250 metres away.

I released the string and let my huge fish get away. 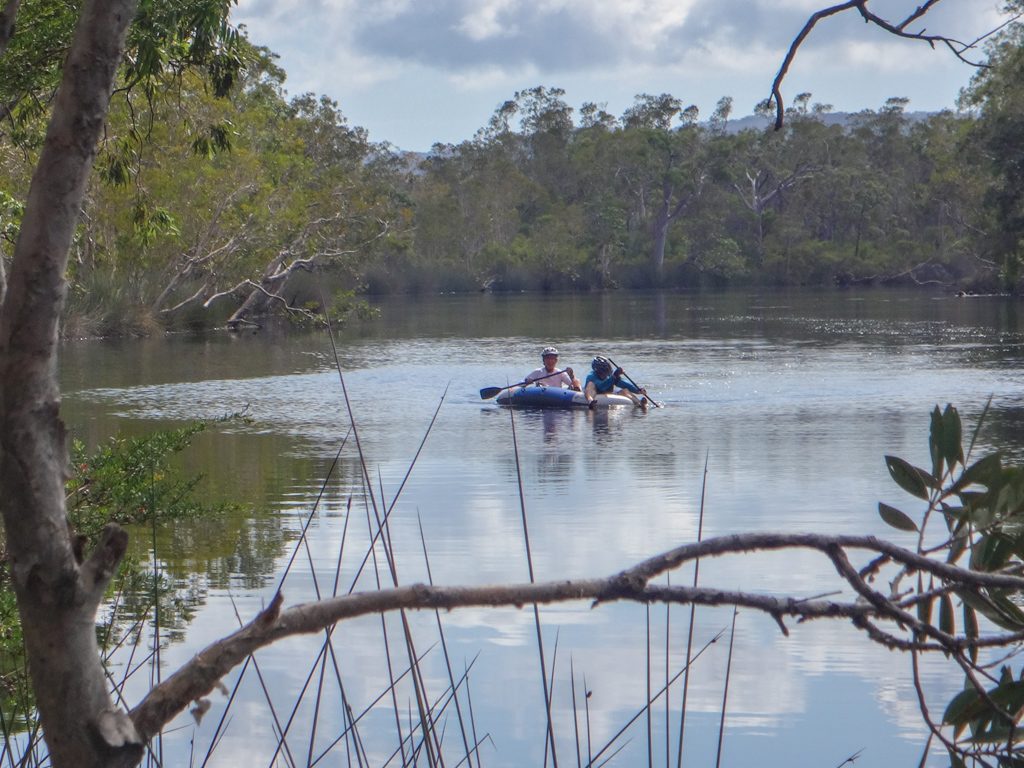 Darb and Eric off-loaded the first bike on the far shore, then paddled back to pick up some more cargo. 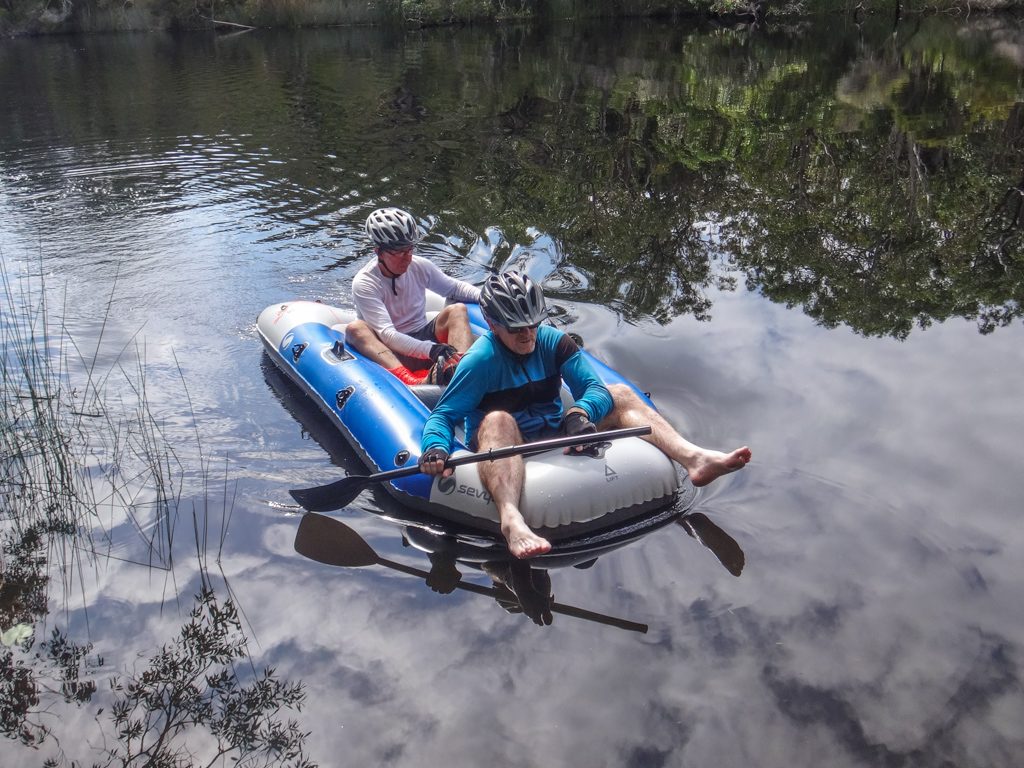 Eric dumped a huge wad of tangled string at my feet:  200 metres of wet builders twine.  I bundled it away.  When I got home I spent the next three nights untangling it while I watched TV – a strangely zen-like experience.

Next it was my turn.

I sat in the back and paddled, while Jason steered from the front. 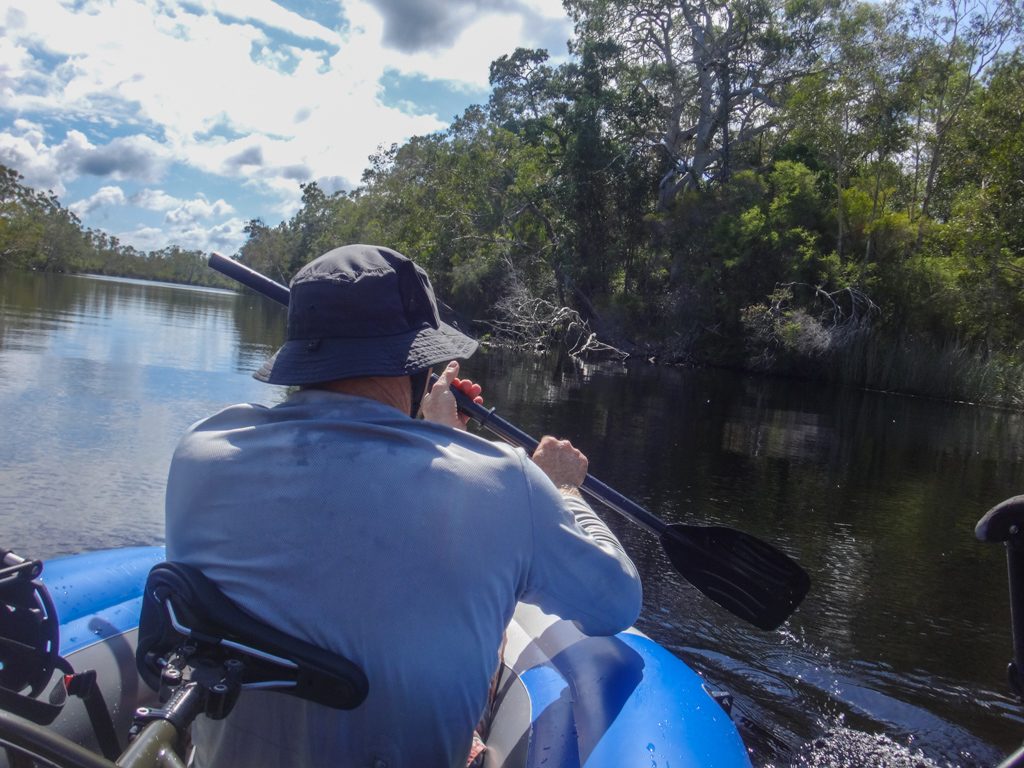 The bike dug into my legs.  The handlebars dragged in the water.  But it worked.  On a calm river like the upper Noosa River, this seemed quite a stable way to move bikes. 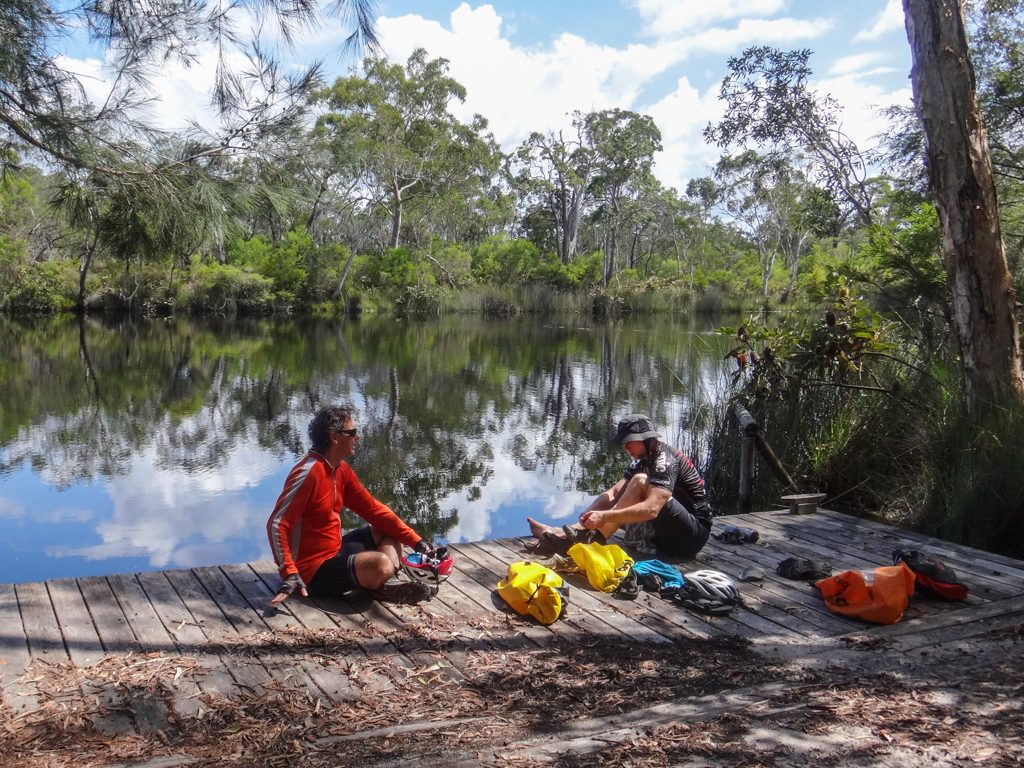 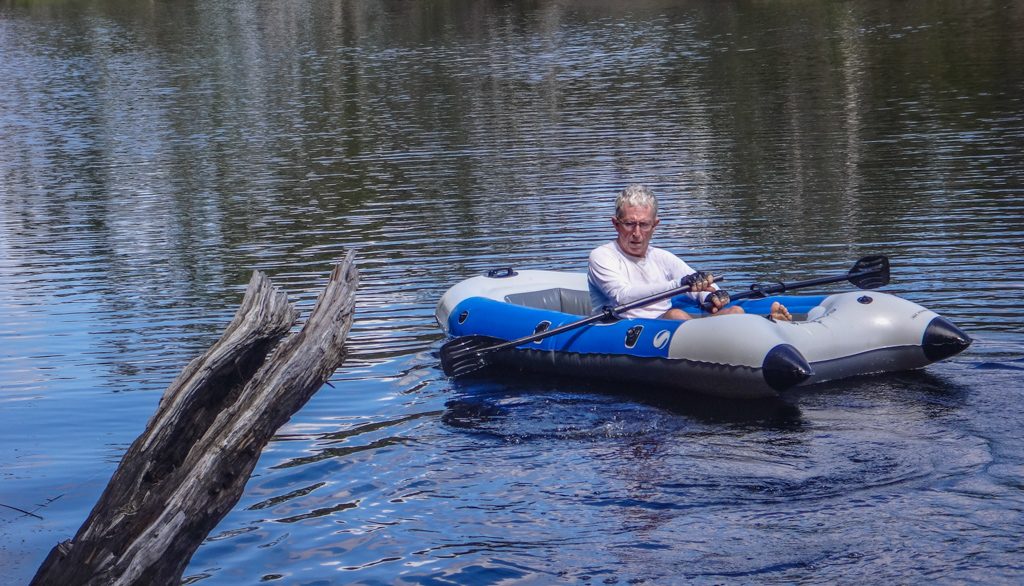 Jason and I waited at “Campsite One” while Eric and Darb retrieved the final bike.

He taped my “beam rack” to a tree branch to fashion an impromptu paddle.  It was heavy but did the trick.

We stashed the boat in the bushes on the far bank.  There was no need to take it with us because there was very little possibility it would be stolen.

Then we set off upstream past some of the other camp sites. 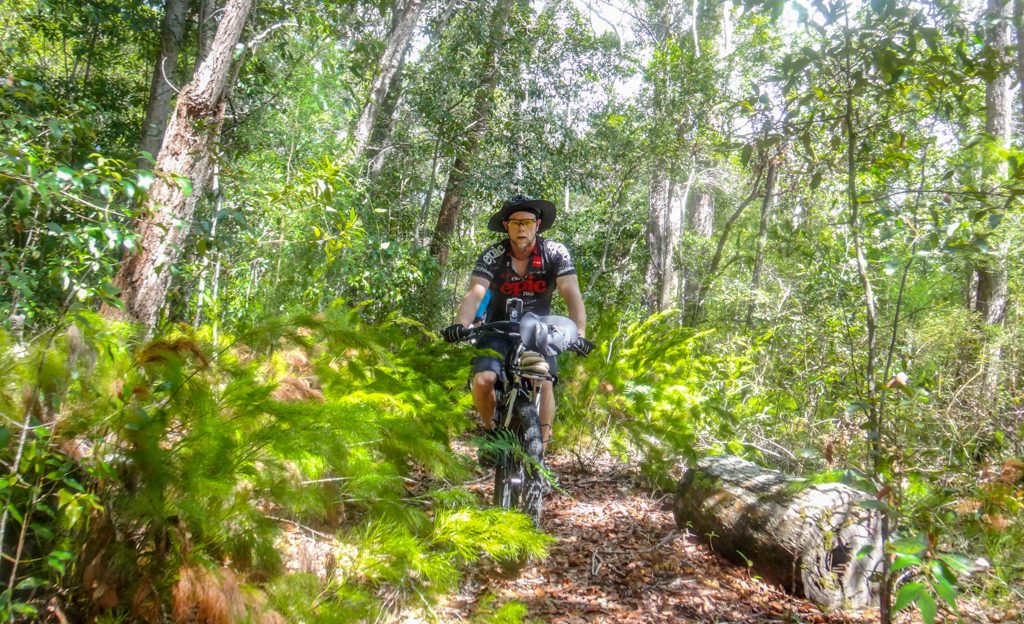 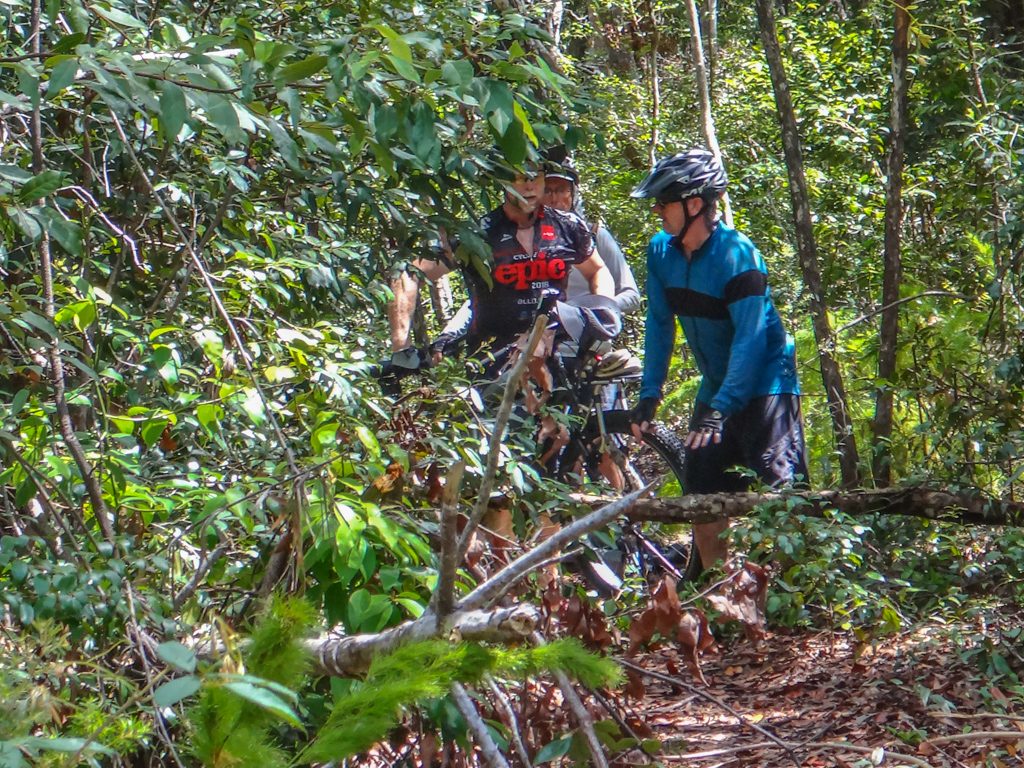 The track here is narrow and overgrown.  We had to step over some fallen trees in places.

We love these types of tracks.

At Campsite Three we took a short break to enjoy the river. 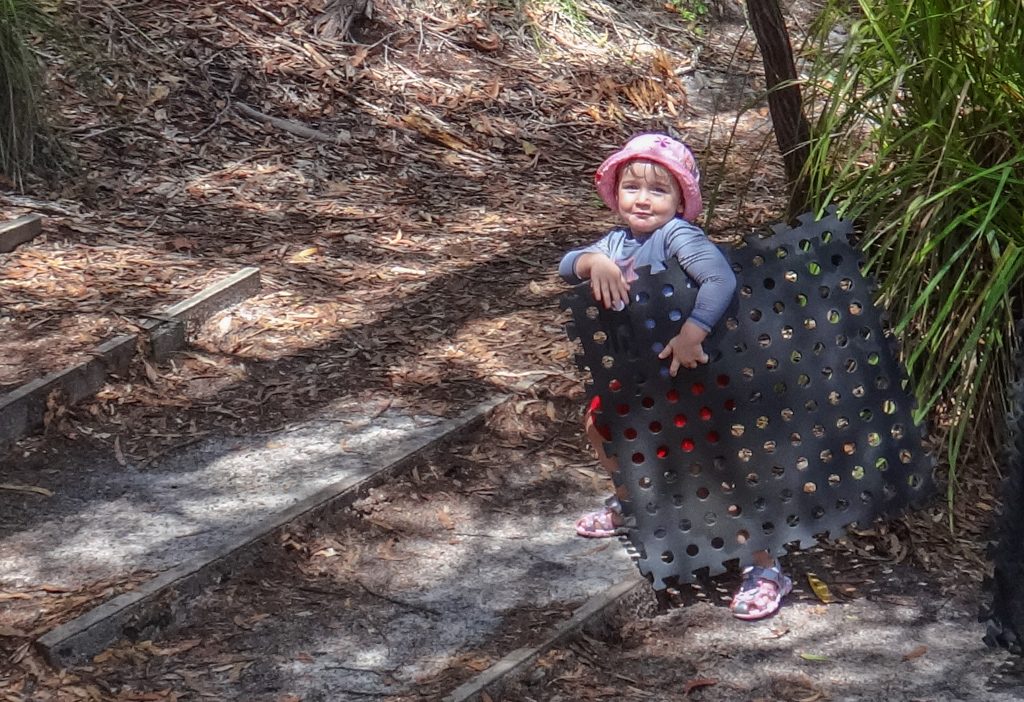 Some of the campers looked at us strangely. 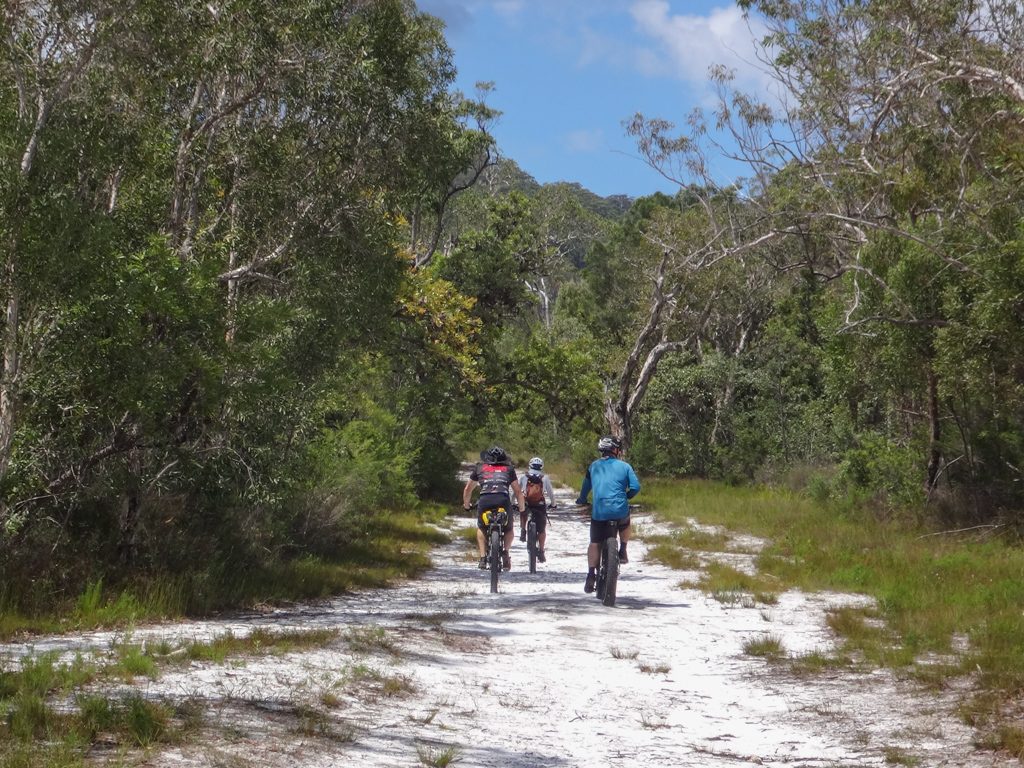 From Campsite Three we left the river and headed up a sandy track to the top of a hill. 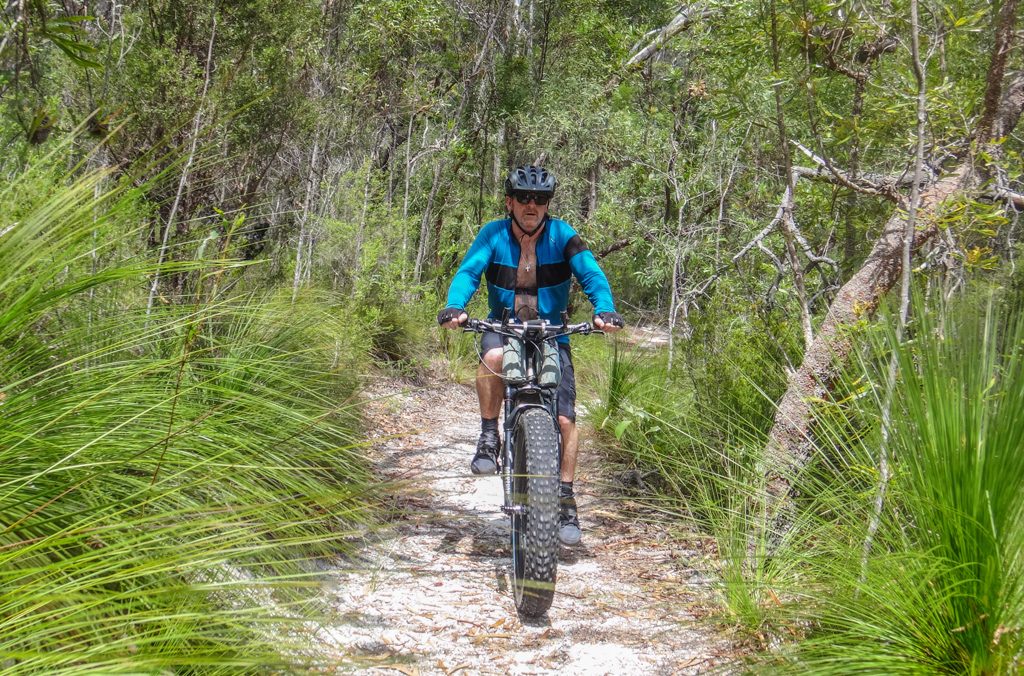 Recent rain had made the surface firm.  It would have been possible to ride this on narrower MTB tyres.

It was a five kilometre climb to the top of the hill.

I was battling a virus and found it physically demanding in the hot humid weather.

Later Eric told me he needed to walk some of the way.

As we climbed, we enjoyed views of the Noosa River below us with its extensive network of lakes and swamps.

Eventually we reached the top.  I was exhausted. 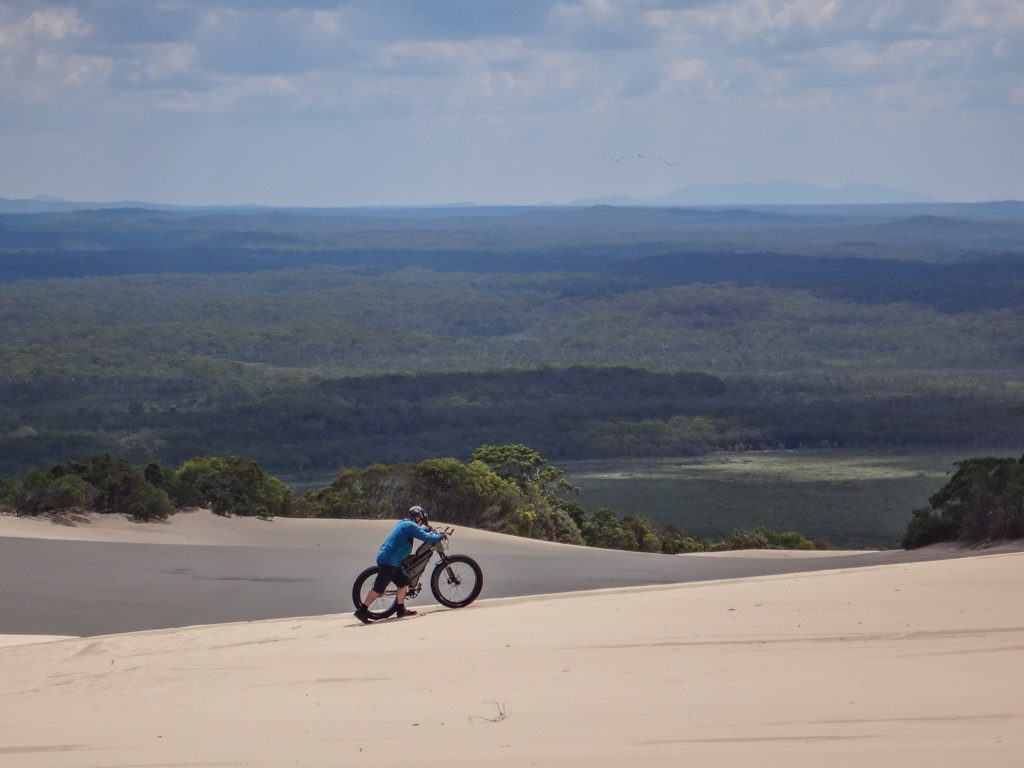 The vast Cooloola Sand Patch sits atop the hills behind the ocean.  We could see to the horizon in almost every direction.

Of course, when you’re at the top of a wide sand blow and have a fat-bike, there’s only one thing to do: 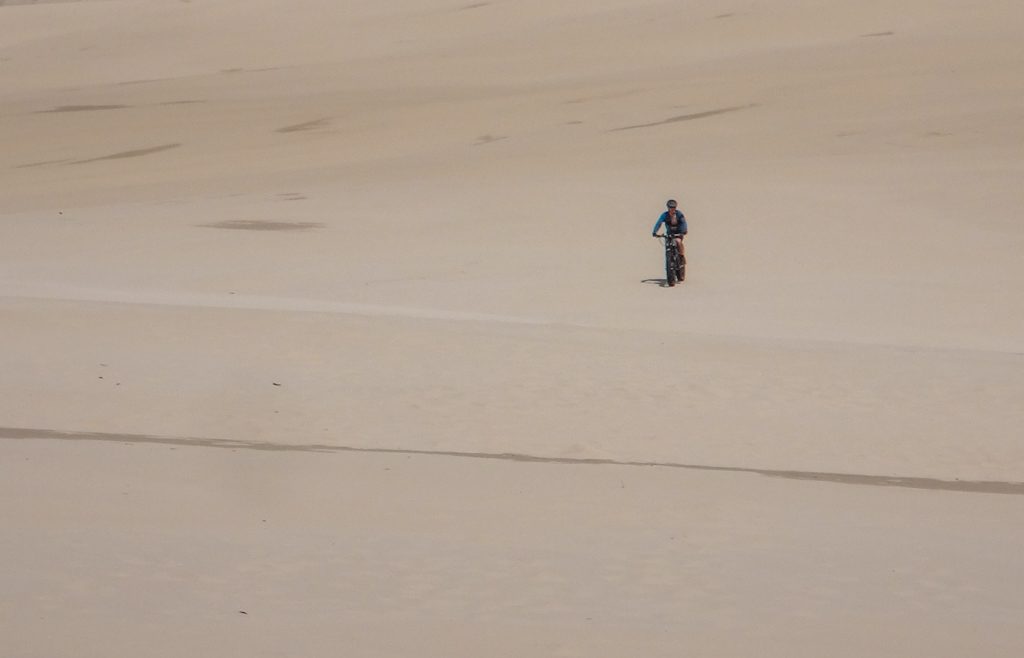 We rode over the soft sand.  If you ride fast enough the tyres float on the surface, and you don’t sink.

But when you change direction or slow down, you end up getting bogged – which means you have to push the bike out. 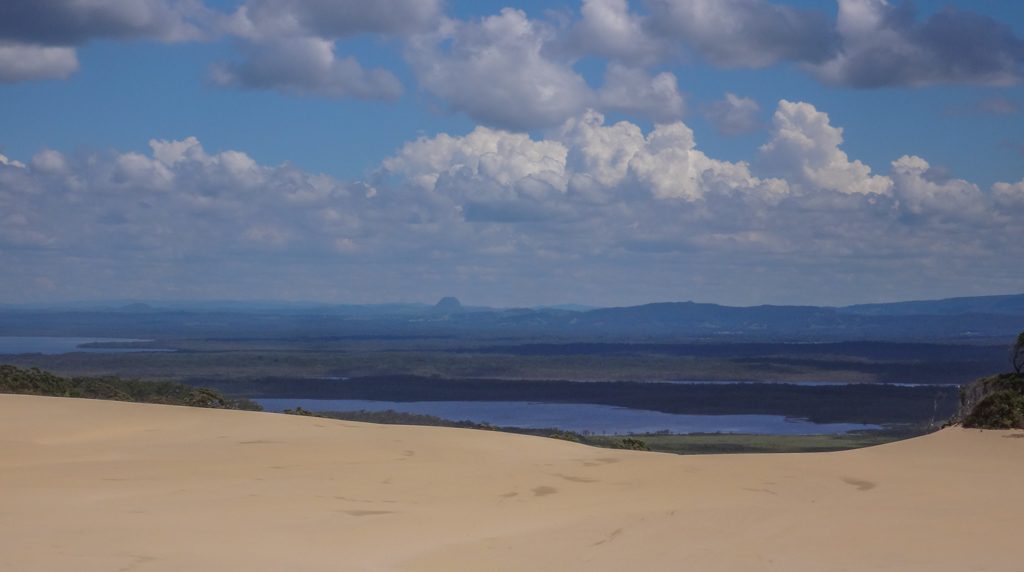 The views were spectacular.

From here it’s also possible to ride down to the beach, but we decided this was a good “half-way” point on the ride and decided to turn around here. 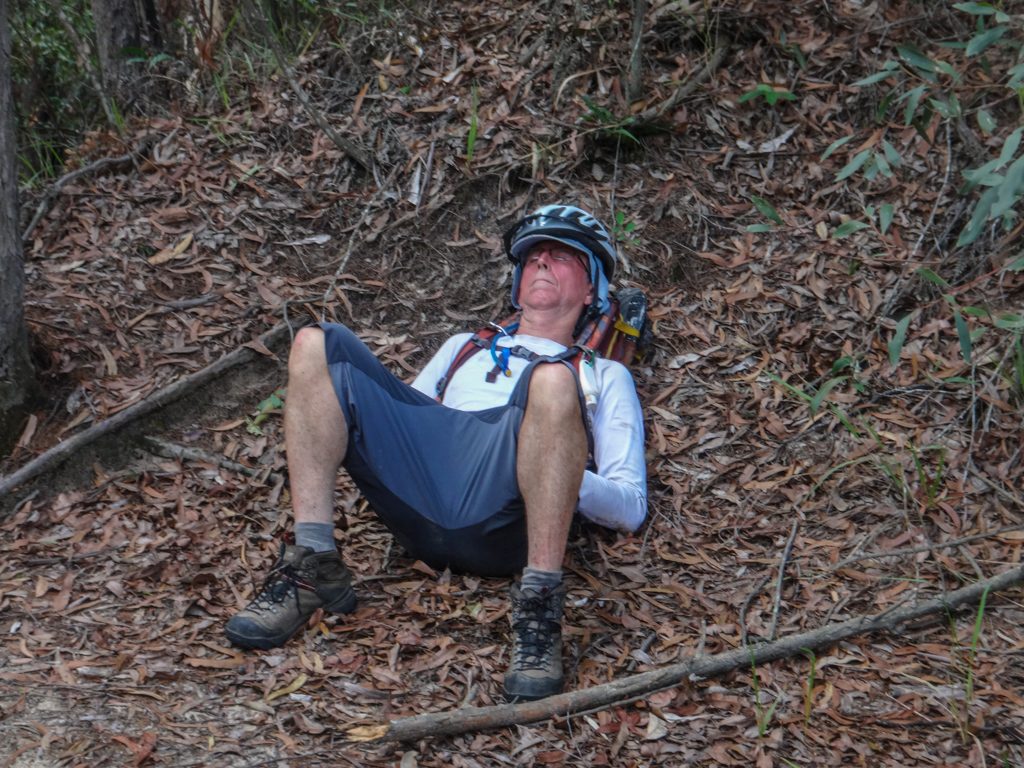 Eric took a quick “power nap” while we explored the sand blow. 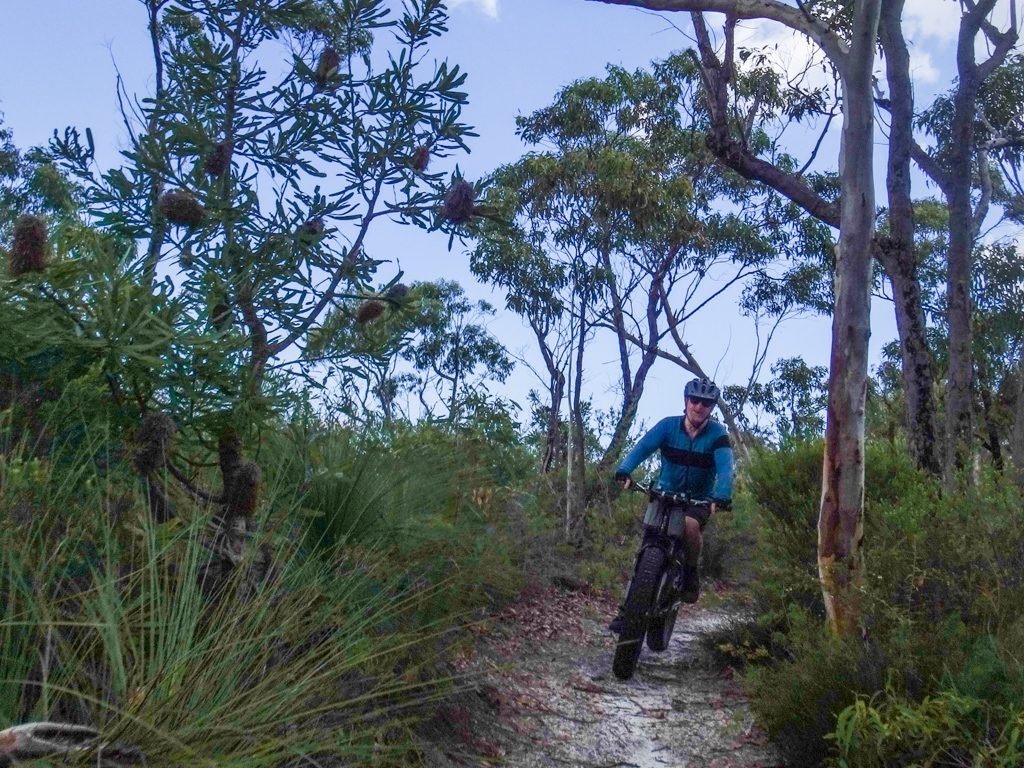 The ride back down the hill was much easier.

I enjoyed feeling the breeze cool me down while I coasted back down to the river. 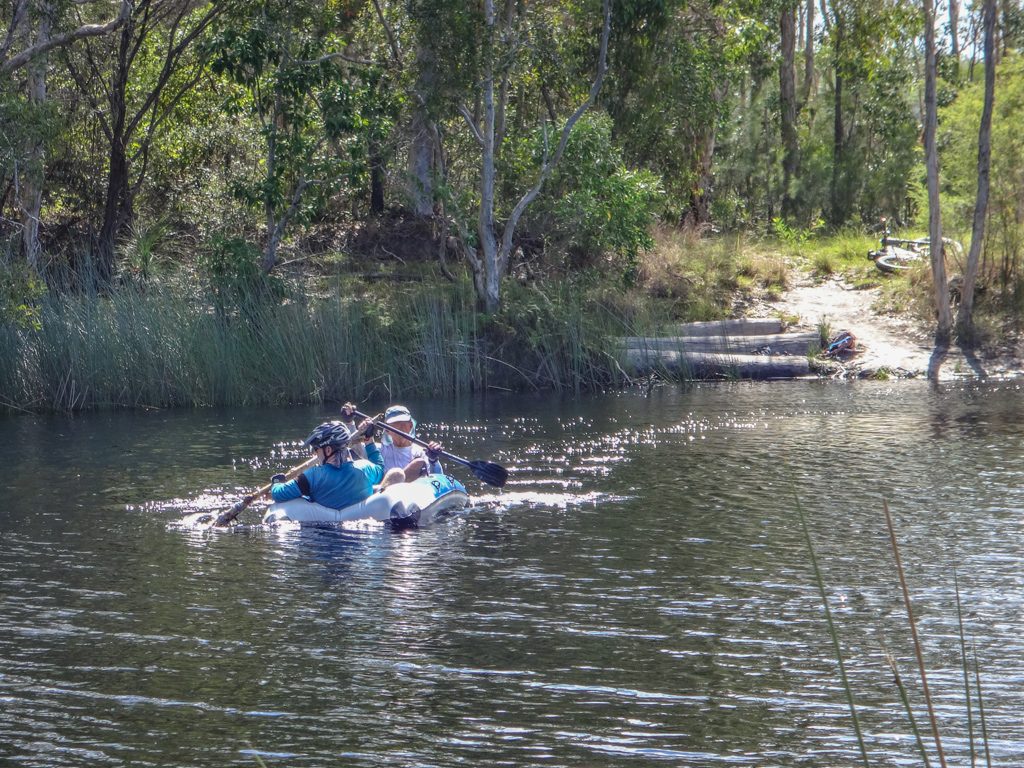 We retrieved the boat, and found an alternative launch point further down stream.  Now it was only a quick 40 metre paddle straight across the river rather than a longer paddle diagonally across. 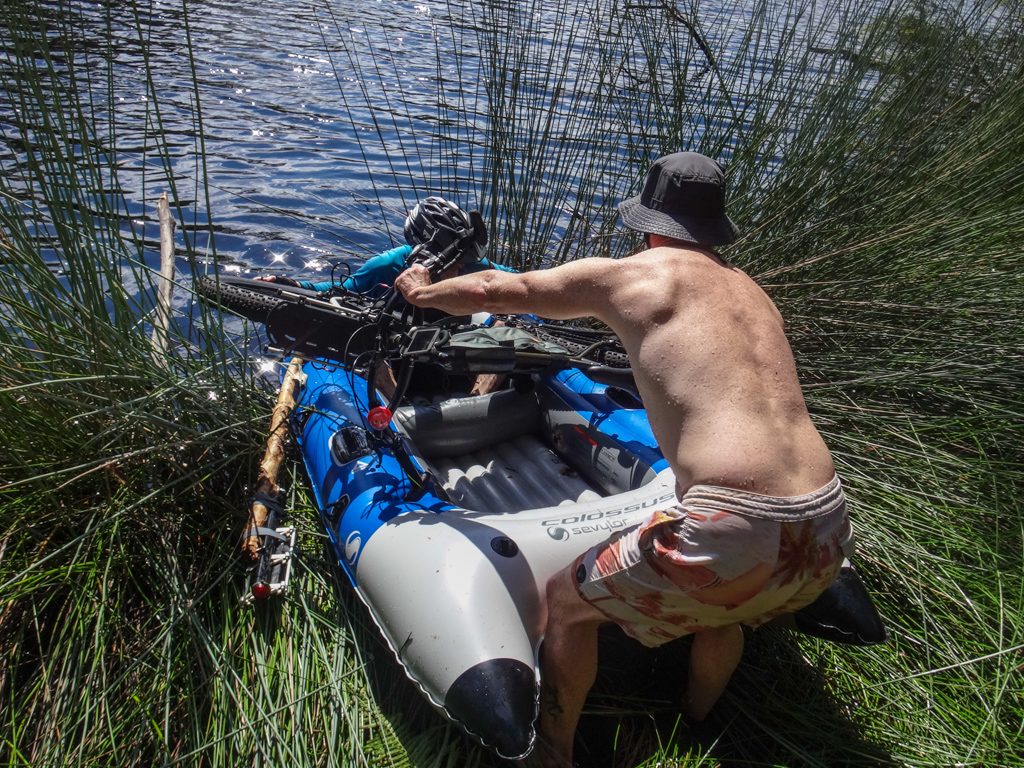 We did the bike ferrying in reverse.

We were all familiar with what needed to be done and completed the return leg quicker than our original crossing earlier in the day. 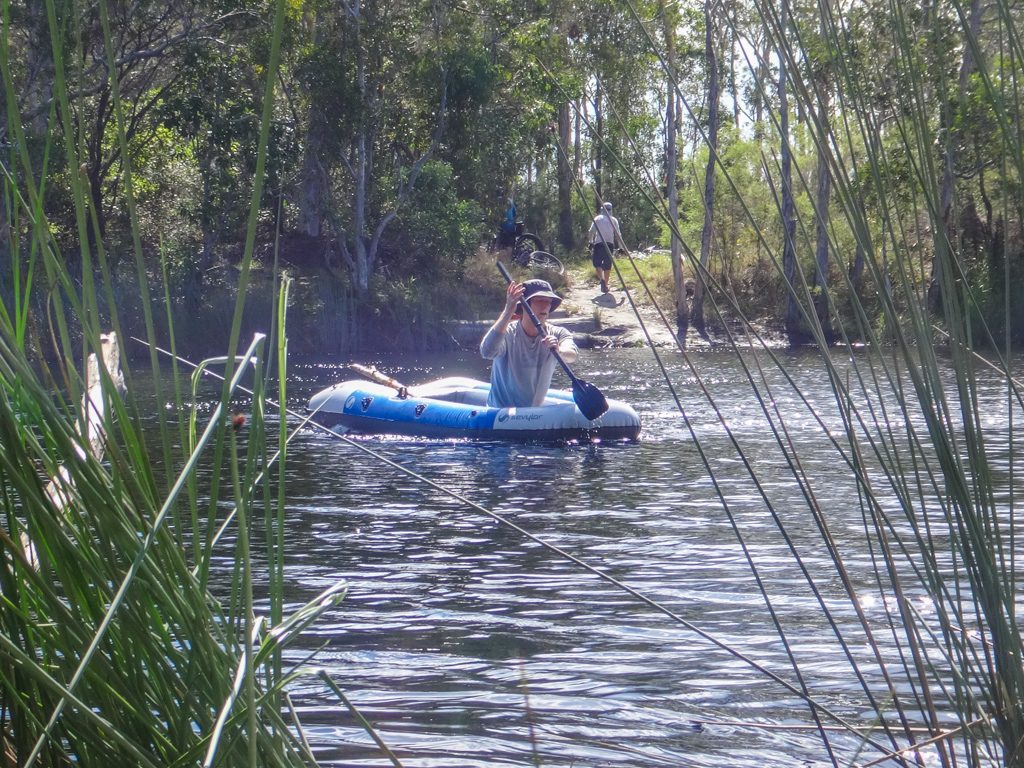 I was feeling tired and lay down in the grass.

It seemed like I had barely closed my eyes before Jason had returned for me and my bike.

I paddled with the makeshift “beam rack” paddle while Jason used the remaining “good” oar. 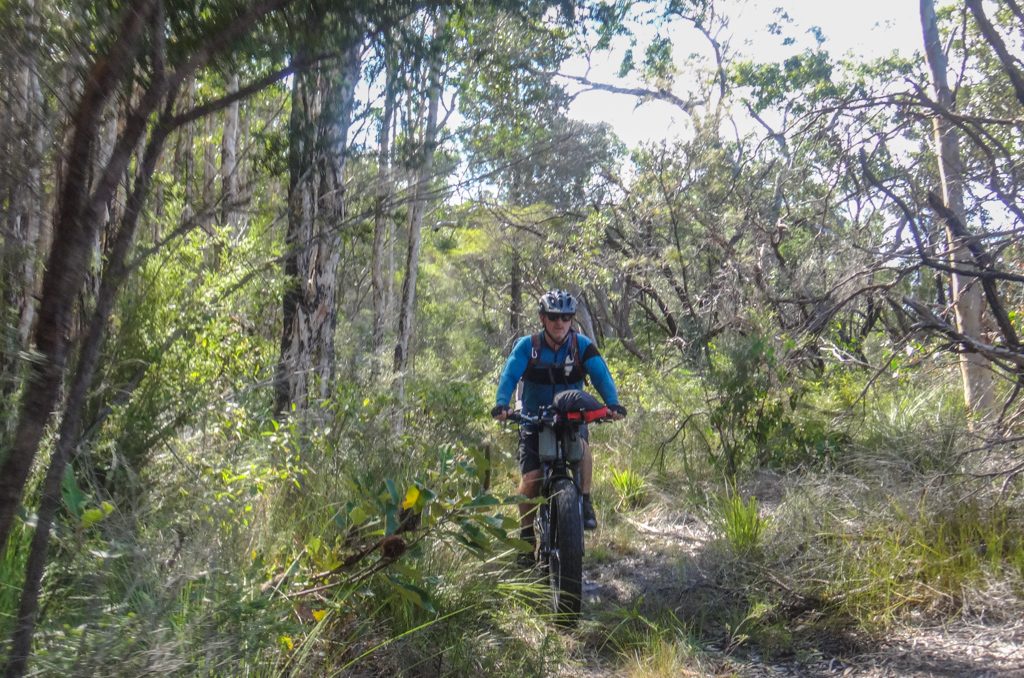 Back over the river, we loaded up the boat with its associated gear and completed the short trip back to the cars.


We travelled about 25 kilometres in about six hours including breaks, paddling, loading and unloading.

During that time we climbed about 260 metres and I burned about 2,300 kcal.

Apart from the logistics of carrying a large inflatable boat around, this was a reasonably easy ride. The hot humid weather added a small amount of difficulty. I found it tougher than usual because of health issues at the time.

Thanks Eric, Darb and Jason for a fun day exploring some beautiful country! 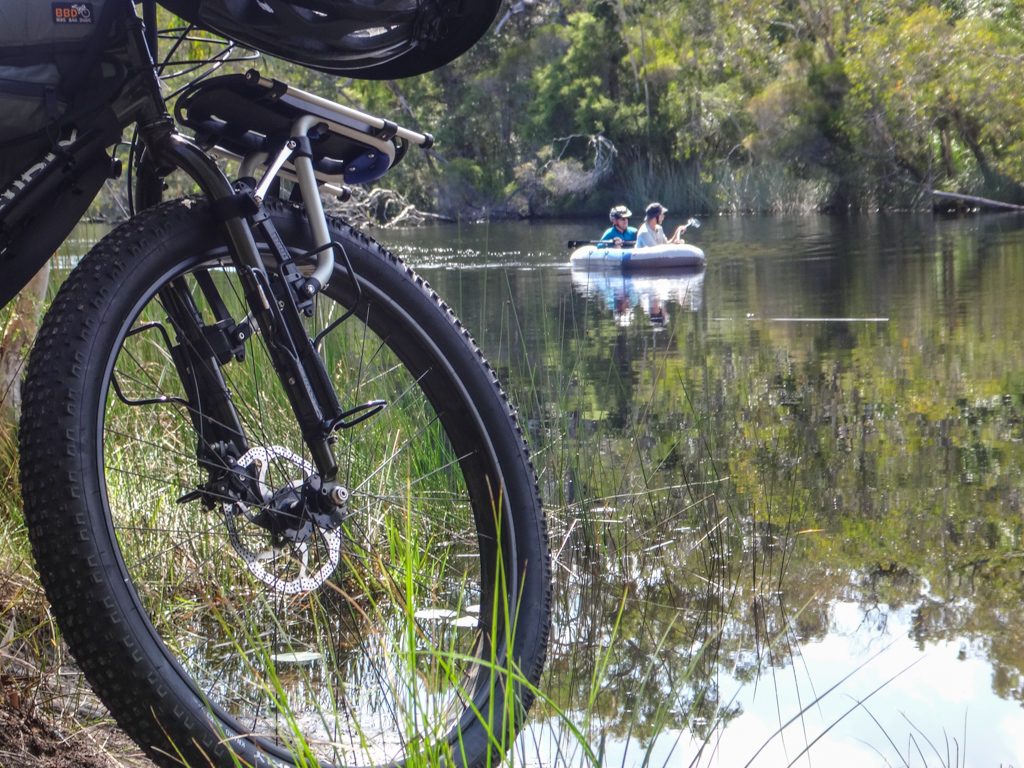