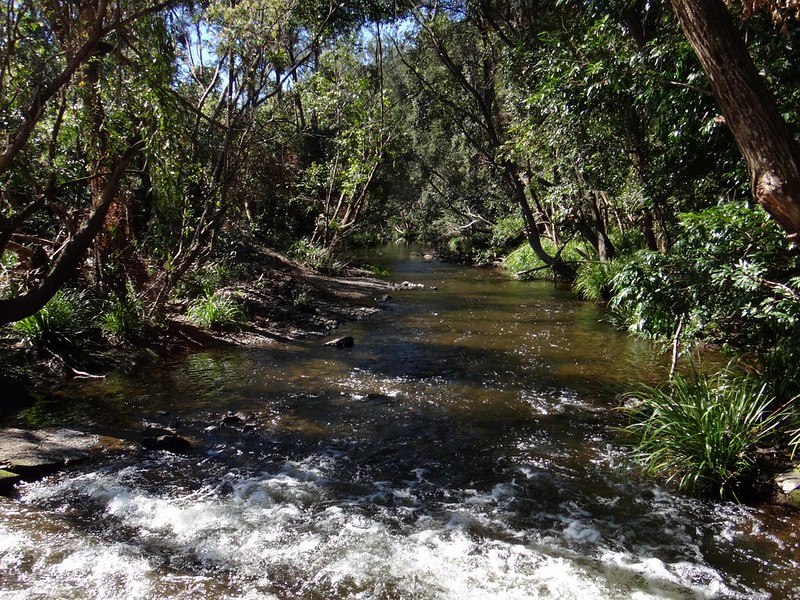 Nestled in the eastern foothills of the Conondale Range, Borumba Dam is an artificial lake which was formed when Yabba Creek was dammed in 1964.

The traditional owners of the area are the Kabi / Gubbi Gubbi aboriginal people. In their language, “Borumba” means “Place of minnows”.

In 1910, John Matthew wrote a book entitled “Two Representative Tribes of Queensland” in which he studied the ways of the Kabi / Gubbi Gubbi people. He spent six years living with and learning from these amazing people.

He told of an ancient song which the Kabi women would sing while boys went through the initiation ceremony which transformed them into men. The song mentioned the minnow (Galaxias) – a fish with a gleaming mouth: 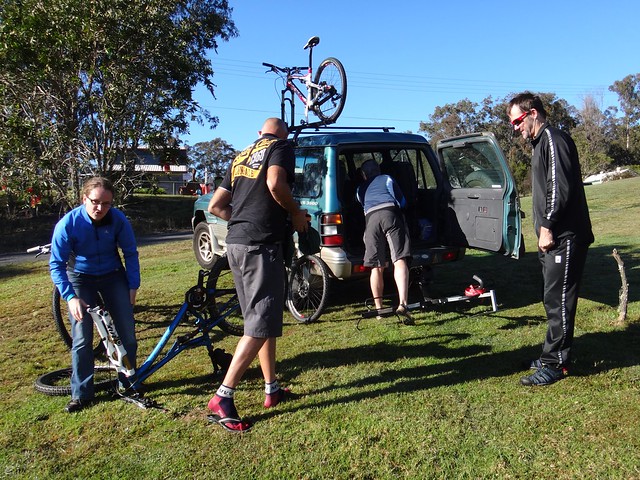 Today’s ride started at Jimna, high in the Conondale Range. The aim was to ride down the range to Borumba Dam, then ride back up a different way, making a big loop finishing back at Jimna. 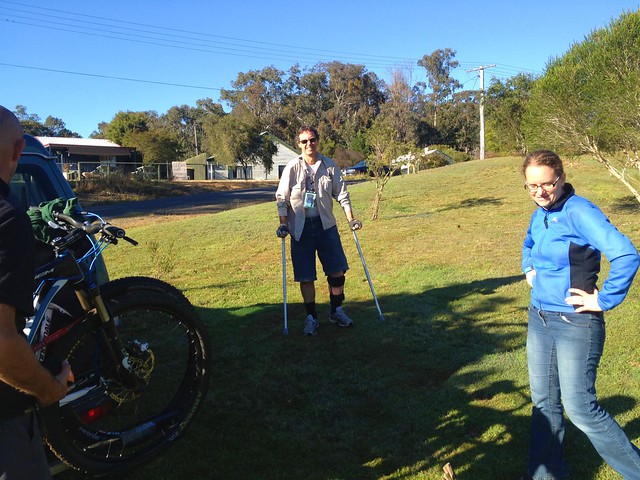 I met Becca, Eric, Paul and Jason there, but today was a new experience for me: While I had planned the route for the ride, I would be driving and they would be cycling. Some of the tracks they’d be riding were far too rough for a car, so I had to drive around the long way, meeting them at various points along the way. I was keen to make sure the route I’d sent them on was good! Eric and Jason agreed to take pictures as I wouldbn’t be there to photograph most of the ride. 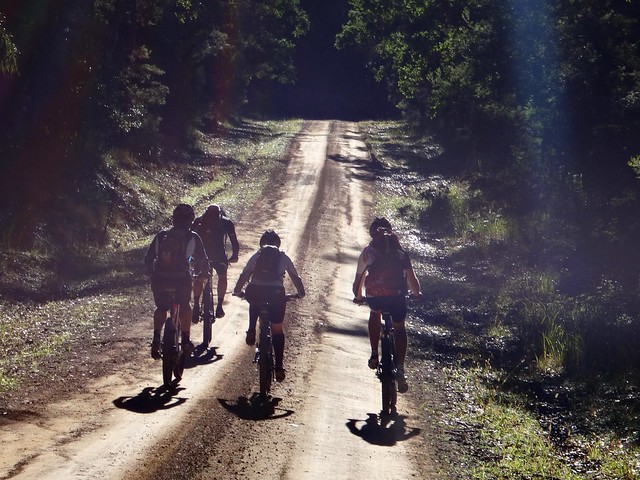 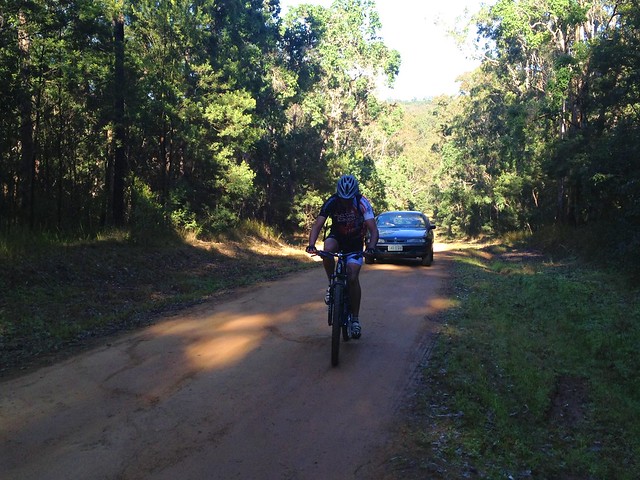 My riding buddies left on their journey to Borumba Dam, I followed for a short way in the car, but eventually I had to let them go, while I made my way back to Jimna to have a look around the visitors centre. 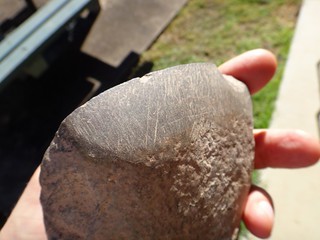 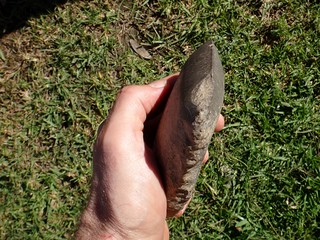 The Conondale Range around Jimna has a rich aboriginal heritage, and I was lucky enough to actually handle an ancient stone axe – sides worn smooth with use. As I touched it I tried to imagine what life would have been like here, ages ago. 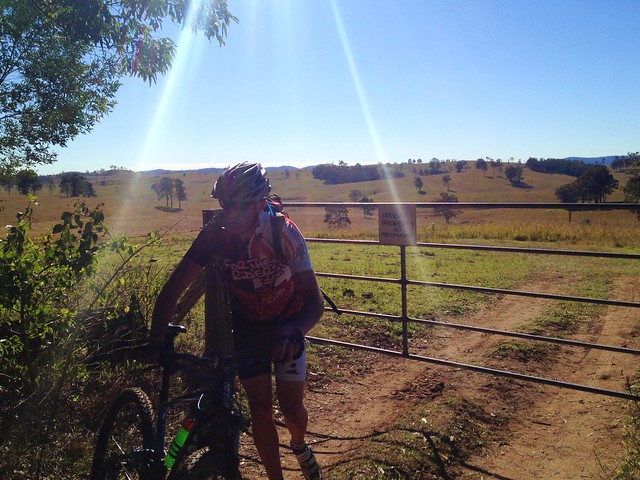 Meanwhile, our riders were having an interesting time. Instead of following the planned route, they accidentally took a righthand turn down a steep hill. Sadly it ended in a locked gate with a “No Tresspassing” sign, so they had to turn around and grind back up the hill. 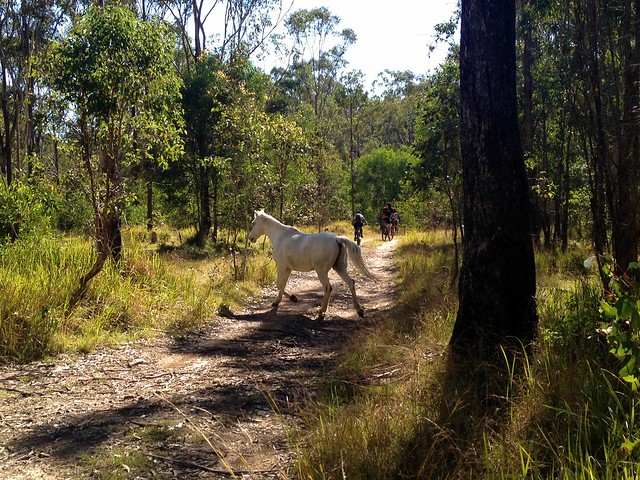 Once back up the hill, the route followed a ridge northwards through beautiful open Eucalyptus Forests. The endless days of sunny weather are finally here. With the cloudless sky a stunning blue above, it was perfect weather for exploring the bush – even the wild horses thought so! 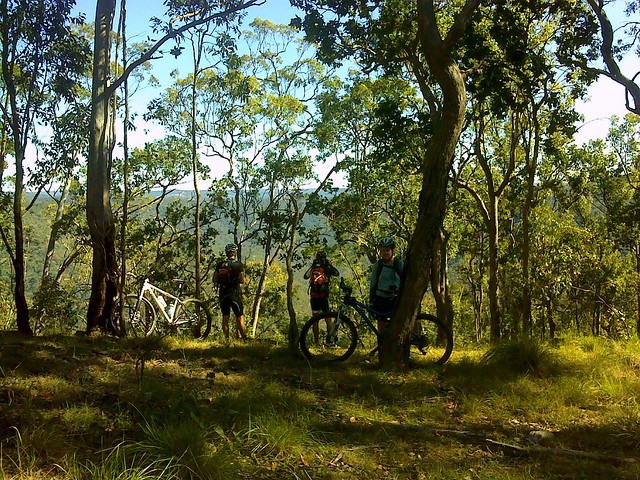 From this point the track started to descend sharply, with great views of the Yabba Creek Valley to the north-west. This is spectacular country. 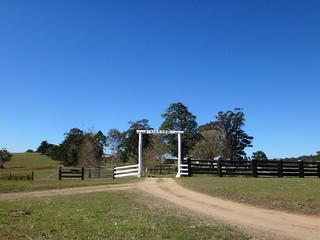 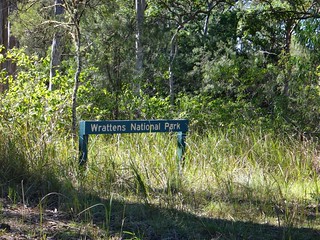 In the car, I was taking my time, slowly driving from Jimna to Borumba via Kingham Homestead and Wrattens National Park. Bordering the national park, Kingham has a deer farm. If you ever drive through here, take it easy as there are large deer running around all over the place. I’m sure it would be easy to collide with one of them if you were driving too quickly.

I took my time. I didn’t want any unpleasant surprises this far from home. 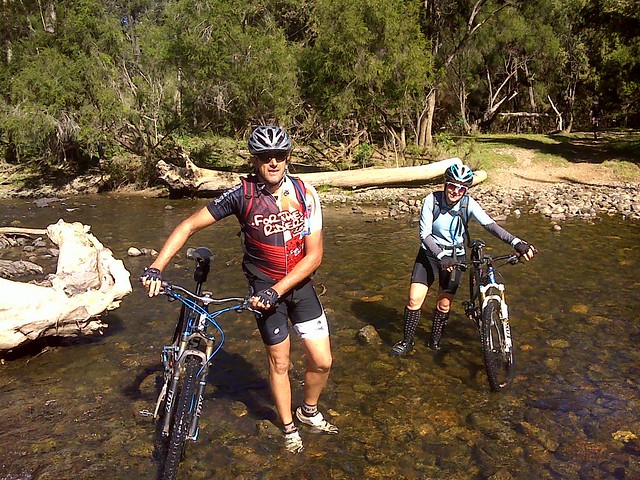 At the bottom of the steep descent, the mountain bikers crossed Yabba Creek. It’s in water like this that you can find “Burun” – the Minnow or Eel Gudgeon. The water is cool and crystal clear, but this crossing was a bit too deep to ride through. 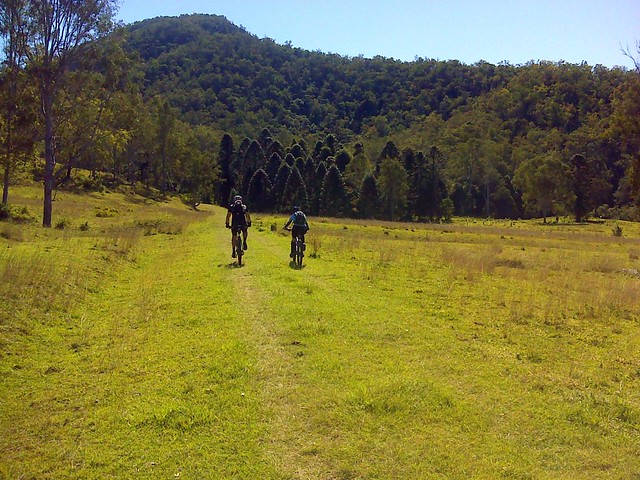 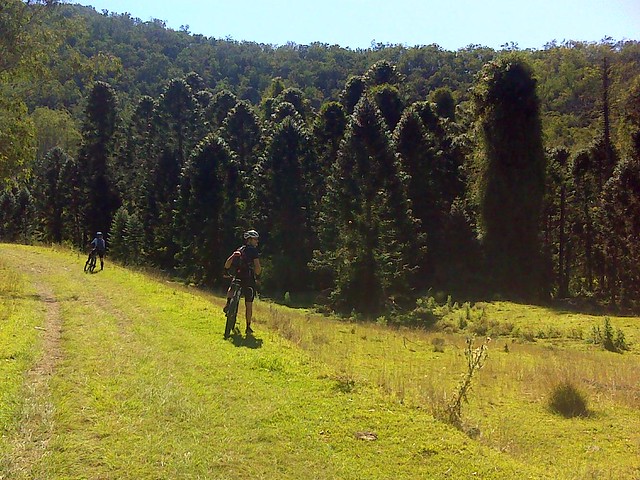 The ride along Yabba Creek has a few clues about what this land would have been like before European Settlement. While much of the forest was cleared in the 19th century for pasture, this stand of Bunya Pines gives hints about of the sort of vegetation that would have been common in the Yabba Creek valley before then. 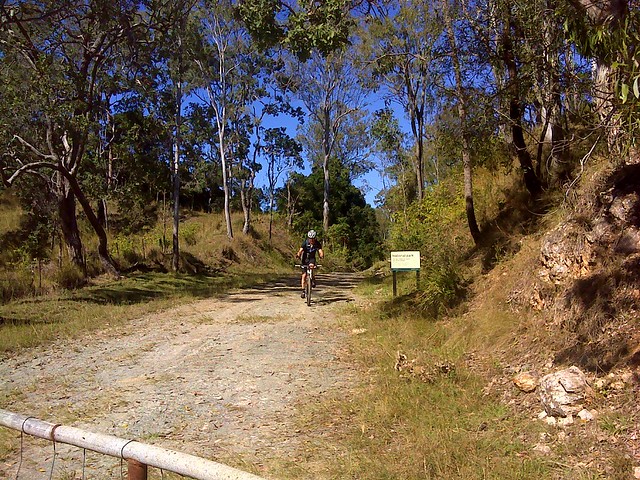 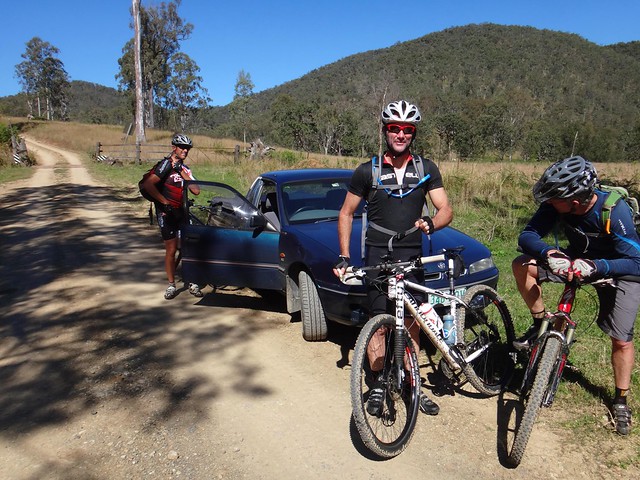 As I slowly made my way down the mountain, I saw a red flash out of the corner of my eye. It was Paul on his bike.

I was amazed. I had a quick cup of tea in Jimna, driven slowly through the forest, and these guys had beaten me to the meeting point on their bikes – even after taking a wrong turn. In hindsight I’m glad they made that wrong turn – otherwise I would have missed them.

Admittedly, I had to travel 35km, and they only had to travel 20km, but it still shows that a mountain bike is a pretty efficient way to get through rough country.

Everyone had wide grins on their faces.

“That was the most amazing descent I’ve ridden”, Paul said.

Jason described it as “The hell crazy descent with it’s drop-off to the left”. Like all true photographers who ride mountain bikes, Jason was torn between enjoying the long rocky descent, and looking for the next place to get a good photo. 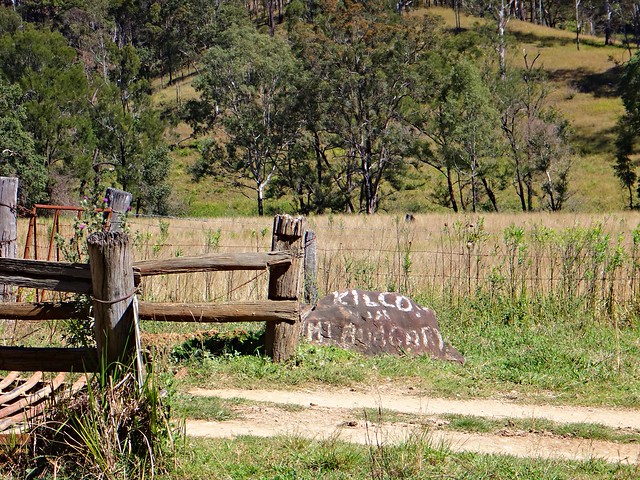 I couldn’t resist taking this photo at our meeting point. The sign painted on the rock says “Kilcoy via Mt Buggery”. Aparently I had driven down “Mount Buggery”, which is a “shortcut” to Kilcoy if you’re driving from Imbil. The mind boggles at how they come up with these names. 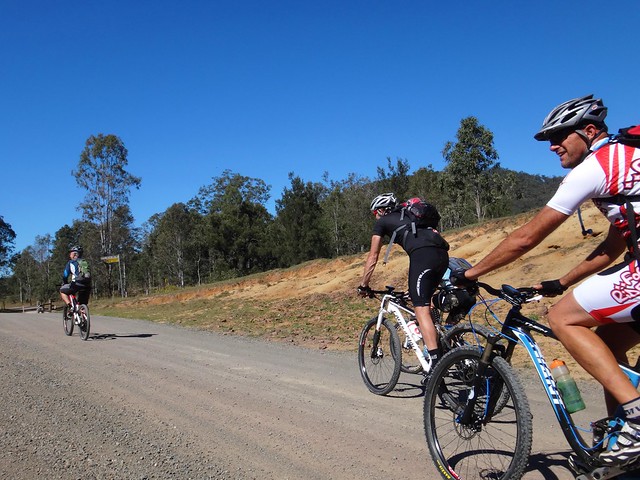 From here it was about 15km along a gravel road to the dam. I passed the riders on the road a couple of times, and had to ford a few ankle-deep creek crossings as our route wound eastward through open hilly farmland. 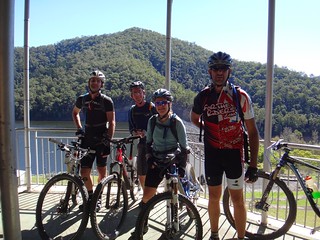 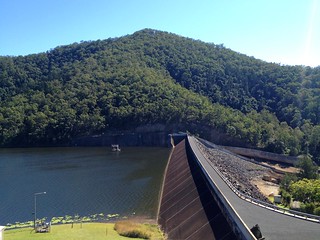 We eventually met up at a shelter overlooking the lake for lunch. I brought some spare water for everyone to fill up with. On an 80km ride it’s important to top up with extra water, as a standard 3 litre camelbak won’t last the entire day. 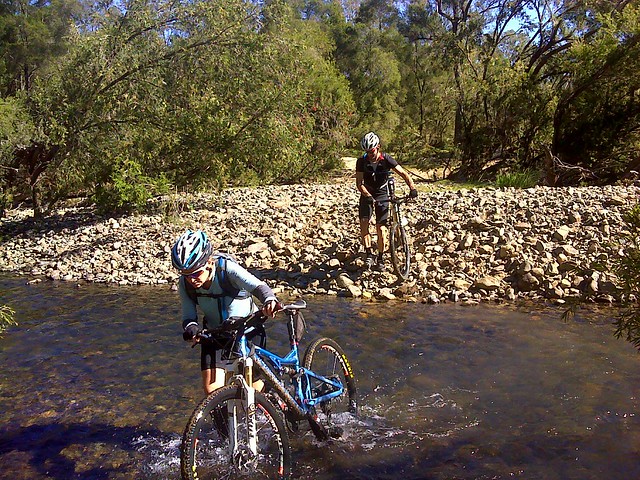 From this point, the riders were on their own. I didn’t think it was sensible for me to try and drive back up the hill to Jimna. We said our goodbyes and they rode back to the foot of the range 15km to the west. 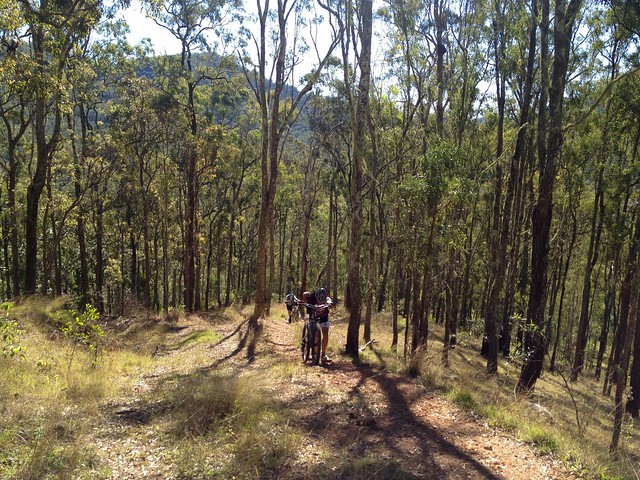 One saying we’ve all become familiar with is that you always have to repay your debt to the Gravity Gods. This was particularly true today. Earlier in the day, the riders had descended about 500 metres as they dropped off the edge of the range. Now they had to grind back up – this time it was a different hill, but it was just as steep, and involved one or two kilometres of walking up very steep hills. 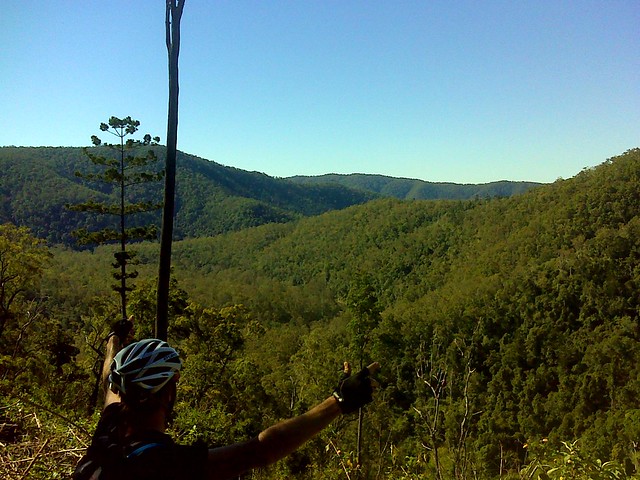 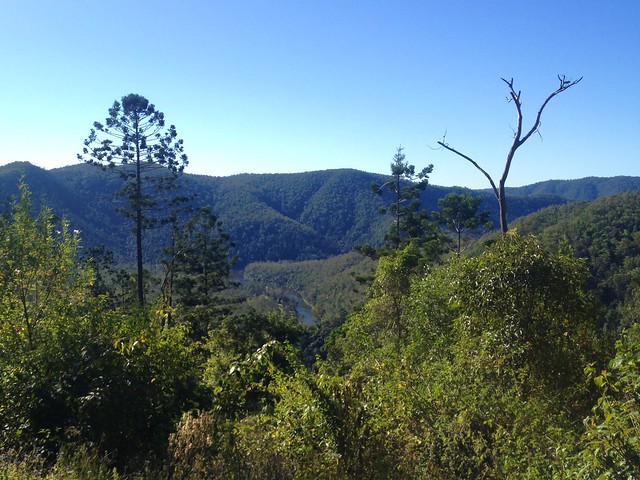 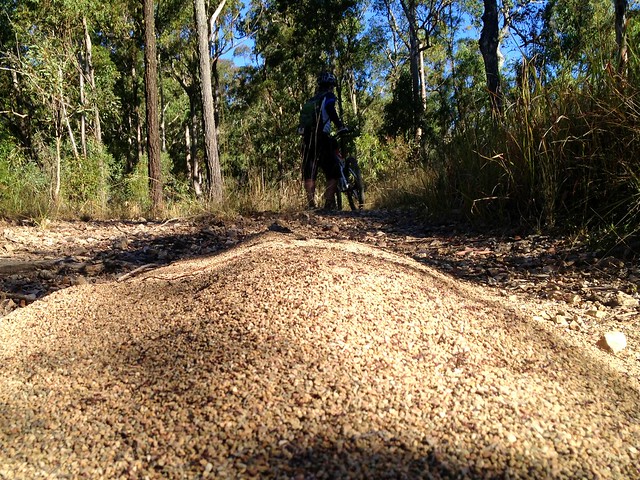 Unfortunately, this was where part of the route I had planned had a few flaws. I had plotted the route using the aerial photos in Google Earth. There were no tracks on the map, so I had to find some way to get through some rough eucalyptus forest for about a kilometre. My track led off into some undergrowth and was impossible to follow, so everyone decided to follow a fenceline eastwards instead. This worked out perfectly and after a short struggle they were soon back on track on Yeilo Road. 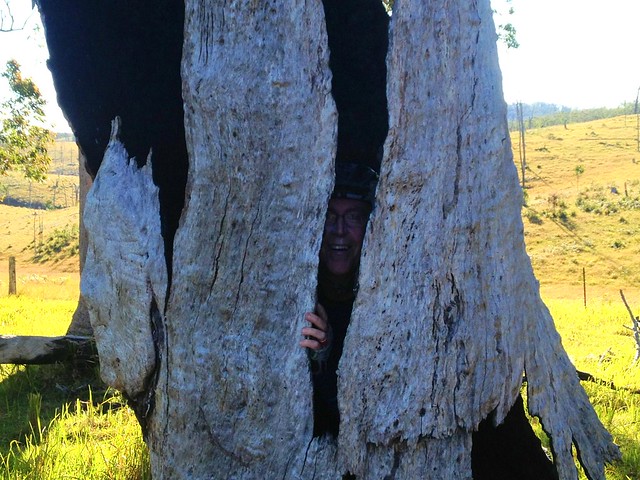 Jason was lucky enough to spot the rare Dousi Hobbit nestled in an old dead tree trunk. It’s unusual to find one of these timid animals in the day time. 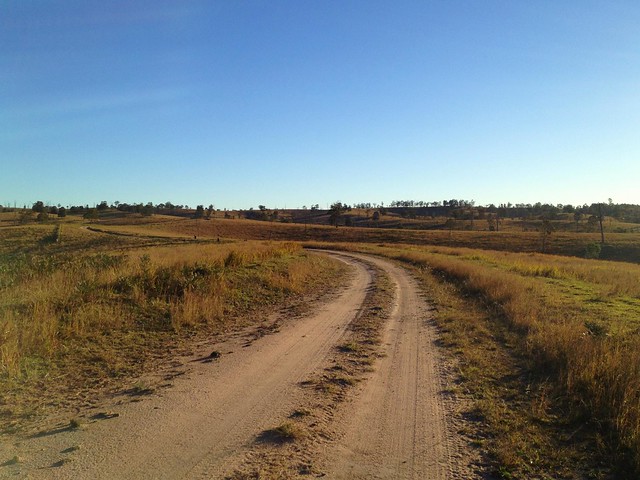 The sun was starting to get low in the sky. It was late in the day, around 5pm, before they eventually re-entered the Jimna Forest for the final leg of the trip. A couple of riders were getting low on water, and starting to feel really low on energy.

Just after 5.30pm, they rolled back into Jimna after riding a total 85km in about 8 and a half hours. During that time they climbed a total of 2,100 metres.

Sorry for the joke, but this is the toughest ride I’ve never done 🙂

After talking with Becca, Eric, Paul and Jason afterwards I think it rates at least 10 out of 10 on the tough-o-meter. They don’t get much tougher than this. Becca says that I broke the metre with this route. Eric called it a “tough mother of a ride”, which (coming from him) means it was quite difficult.

One easier option for this ride is one-way frm Jimna to Borumba Dam or Imbil which would take you 3 to 4 hours and would be mostly downhill.

Don’t attempt the full loop unless you’re very fit, are in a group of very fit riders, and have plenty of food and water. It’ll take you all day.

Thanks Becca, Eric, Paul and Jason for allowing me to plot the course for you, and for letting me tag along.

Thanks Eric and Jason for the great photos!