What an amazing ride!

I found this one by accident, after playing around with google maps for an hour or two. My aim was to find some quiet country roads, and see if I could add in a bit of dirt track, gravel roads, and some hill climbs. And I got it all.

Mosquito Creek Winery is hidden away in the back of Kurwongbah. The problem is that the creek bisects the road, so you can’t drive through it. 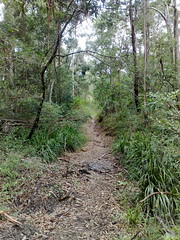 But with a bit of persistent rummaging around, I found a horse trail winding through the scrub, and was able to cross the creek and emerge triumphantly on the other side.

The other pleasant surprise is Browns Road. It’s a “phantom road” which appears on the map, but is not much more than a dirt track. I waded through some muddy grass at the end of McCormack Road, and eventually found a muddy washed out dirt track, with lots of ruts, bumps and puddles. It wound its way between several hidden away farms for a few kilometres before finally emerging at the end of a gravel road 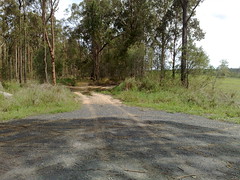 And then a couple of kilometres later, the icing on the cake, a picturesque location with some fascinating history. Browns Creek: 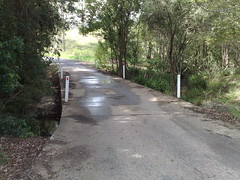 In her book “Reminiscences of Early Queensland”, Constance Campbell Petrie recounted some fascinating history about Browns Creek. The incident probably occurred sometime in the 1840’s.

Another good corrobboree was based on an incident which happened when my father was a boy. This time it had reference to a young gin — Kulkarawa— who belonged to the Brisbane or Turrbal tribe. A prisoner, a coloured man (an Indian), Shake Brown by name, stole a boat, and making off down the bay, took with him this Kulkarawa, without her people’s immediate knowledge or consent. The boat was blown out to sea, and eventually the pair were washed ashore at Noosa Head—or as the blacks called it then, ” Wantima,” which meant ” rising up,” or ” climbing up.” They got ashore all right with just a few bruises, though the boat was broken to pieces. After rambling about for a couple of days, they came across a camp of blacks, and these latter took Kulkarawa from Shake Brown, saying that he must give her up, as she was a relative of theirs ; but he might stop with them and they would feed him. So he stayed with them a long time, and the bon-yi season coming round, he accompanied them to the Blackall Range, joining in the feast there.

Before the bon-yi gathering had broken up. Shake Brown, grown tired of living the life of the blacks, left them to make his way to Brisbane. He got on to the old Northern Road going to Durundur, and followed it towards Brisbane. Coming at length to a creek which runs into the North Pine River, there, at the crossing, were a number of Turrbal blacks, who, recognising him, knew that he was the man who had stolen Kulkarawa. They asked what he had done with her, and he replied that the tribe of blacks he had fallen in with had taken her from him, and that she was now at the bon-yi gathering with them. But this, of course, did not satisfy the feeling for revenge that Shake Brown had roused when he took off the young gin from her people, and they turned on him and killed him, throwing his body into the bed of the creek at the crossing. A day or two later, men with a bullock dray going up to Durundur with rations, passing that way, came across Brown’s body lying there, and they sent word to Brisbane, also christening the creek Brown’s Creek, by which name it is known to this day.

Kulkarawa, living with the Noosa blacks, fretted for her people, and she made a song which ran as follows : ” Oh, flour, where oh where are you now that I used to eat ? Oh, oh, take me back to my mother, there to be happy, and roam no more.” She evidently missed the flour which her own tribe got from the white people. The Noosa blacks made a dance to suit the song, and the corrobboree was considered a grand one. 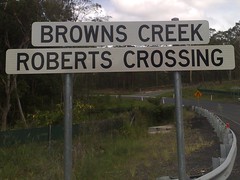 The hill climbs were hard work (Total ascent about 600m), but the views were worth it!