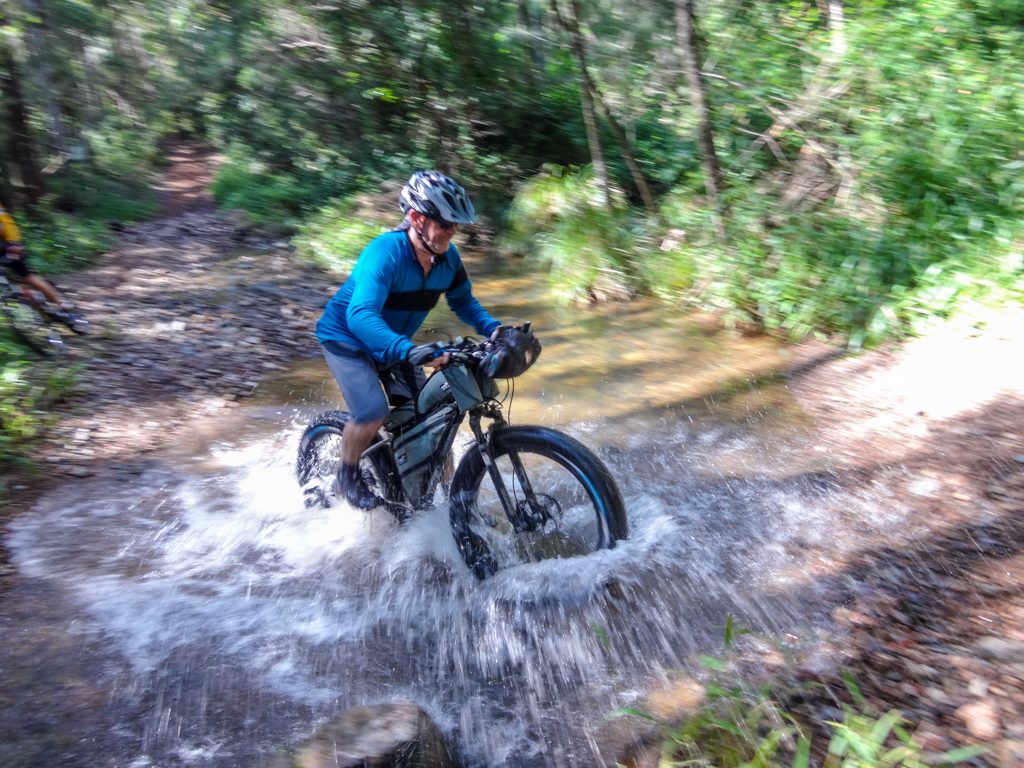 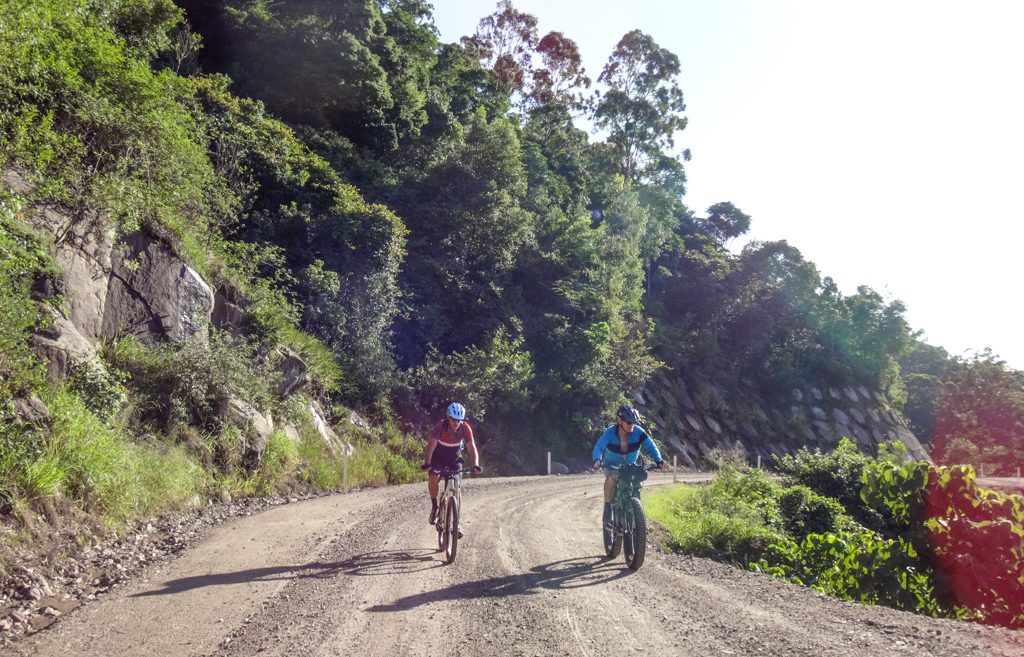 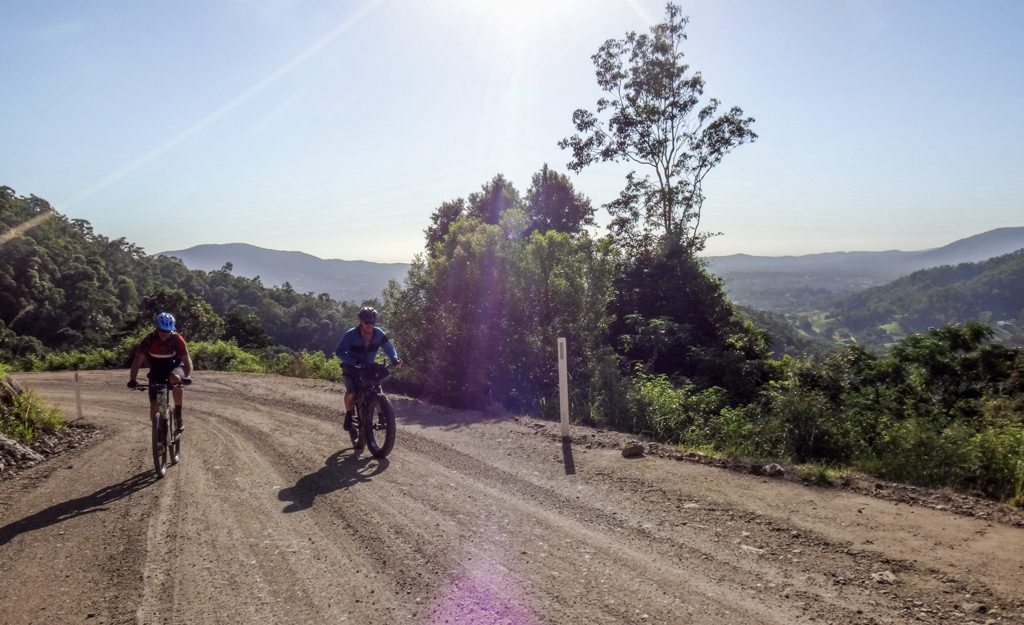 We started our ride at the bottom of the Goat Track, a few kilometres from Samford. 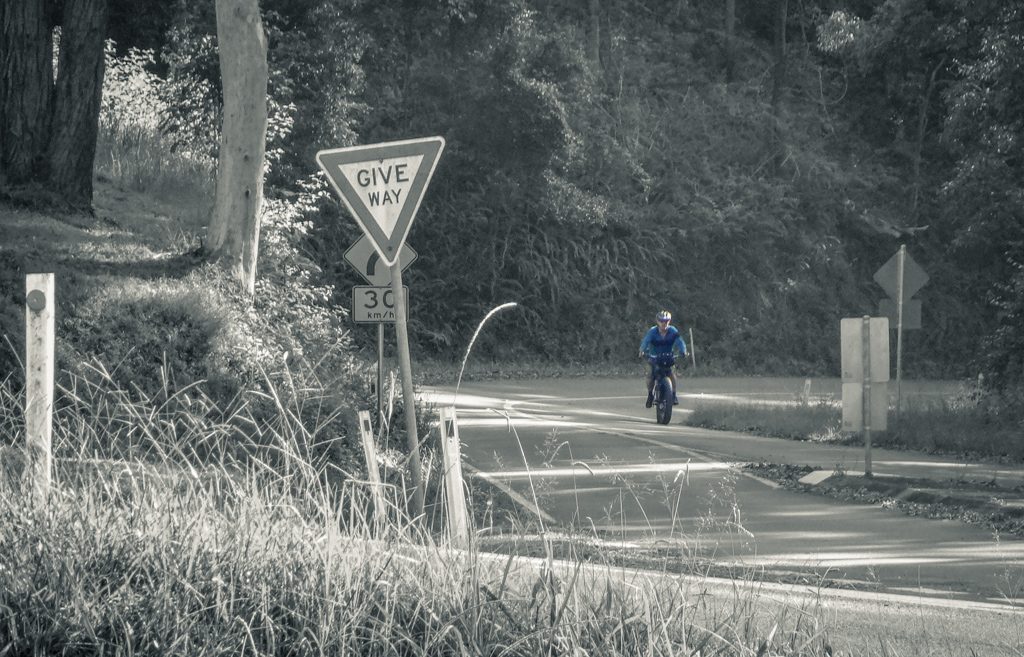 It was a five kilometre climb to the top, but the gradients were reasonably gentle. 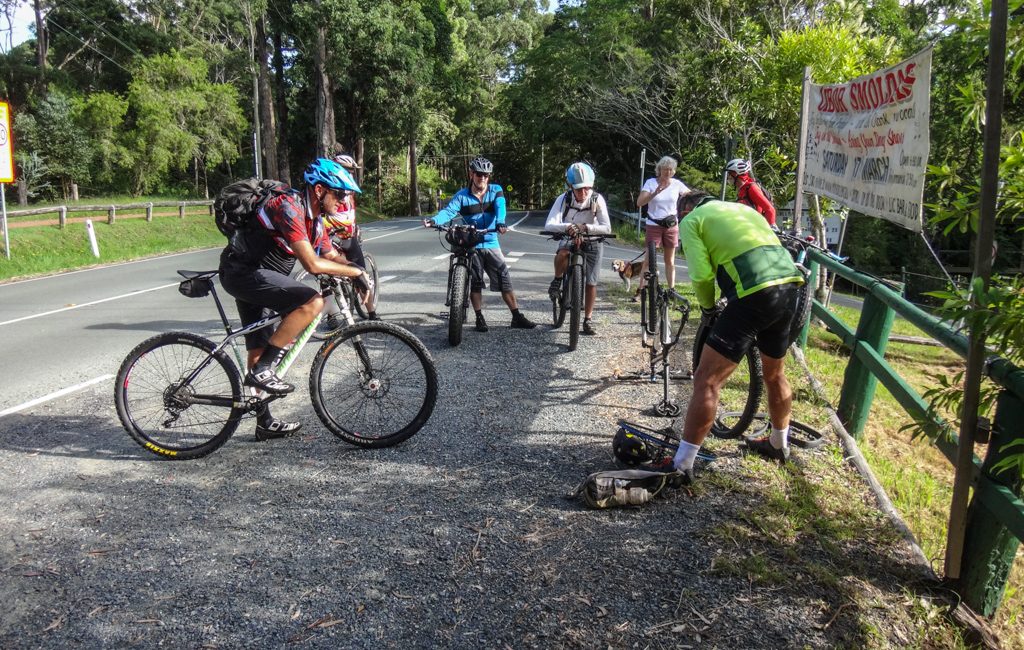 Mechanical failures have become a tradition on our rides. One person volunteers to get a puncture or broken chain, while everyone else stands around cheering them on. Today it was Bruce’s turn. Everyone enjoyed his performance. 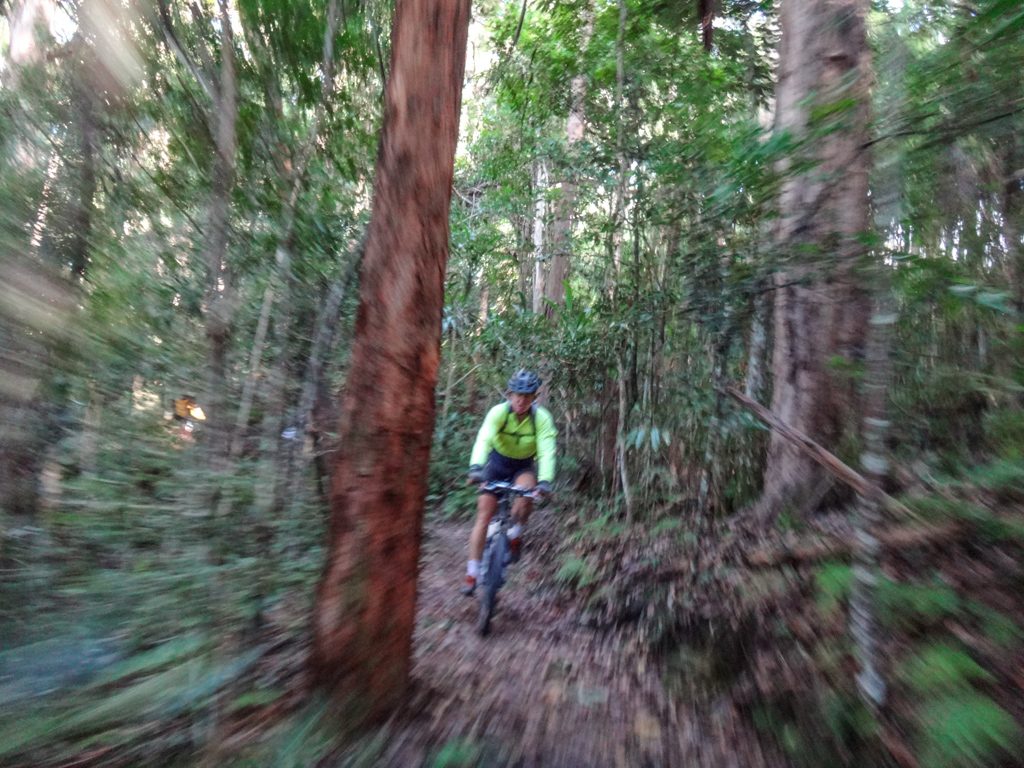 We left the paved road at Mount Nebo, and followed a narrow track through the forest. 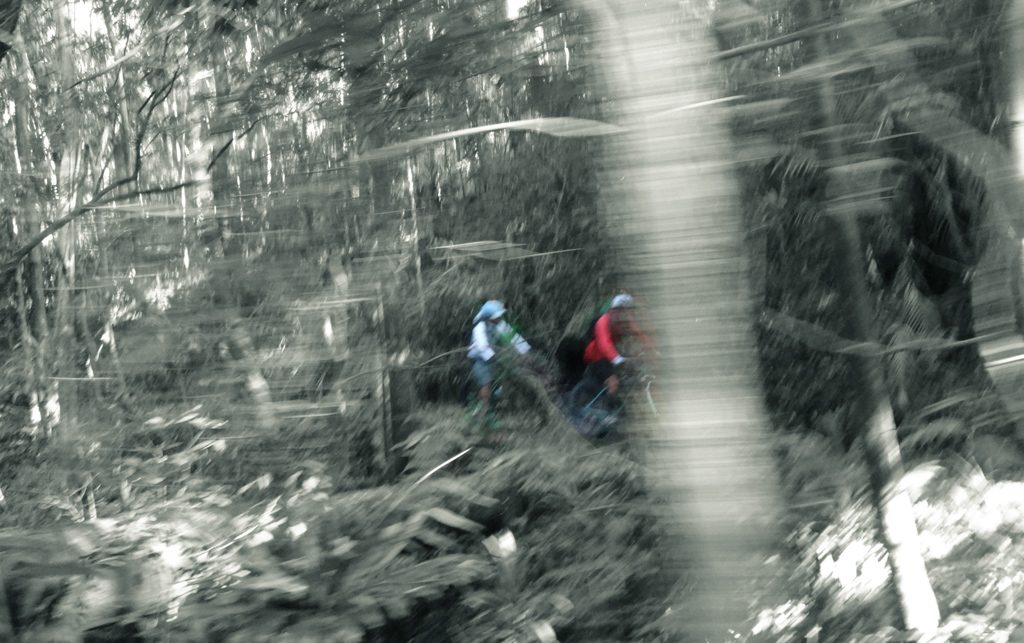 Trees blurred as we rolled along the shadowy trail, and eventually emerged at South Boundary Road. 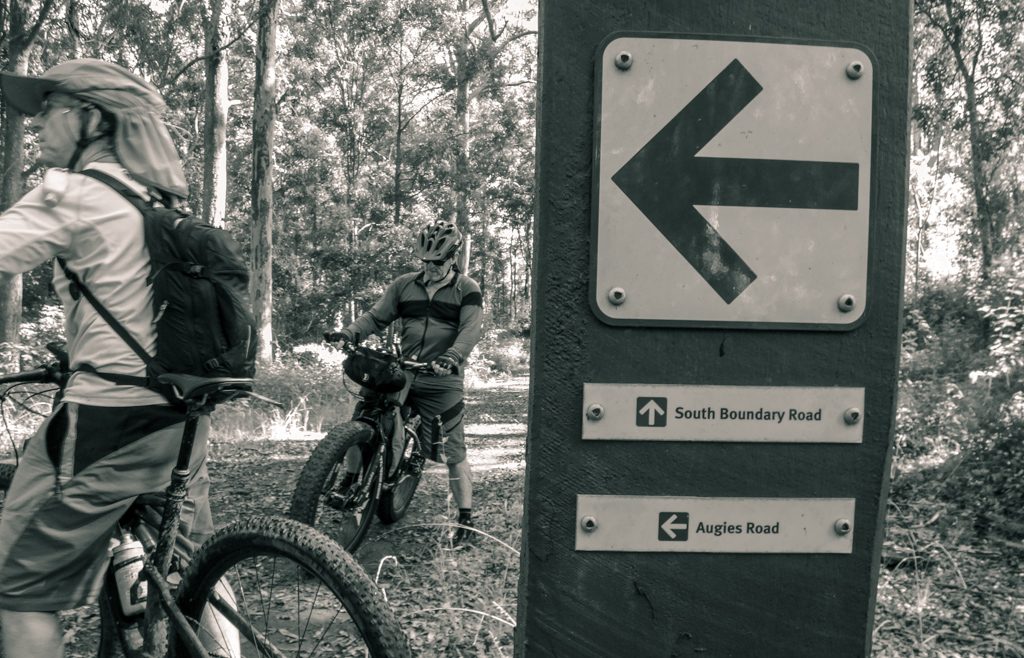 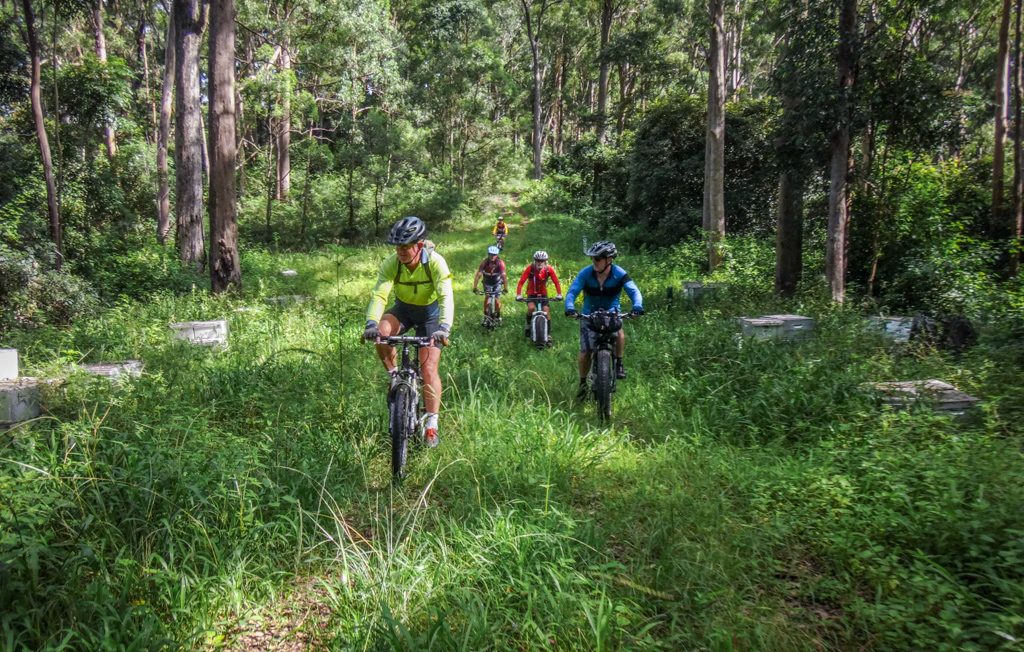 We followed Augies Road down steep hills towards the creeks at the bottom of D’Aguilar National Park. 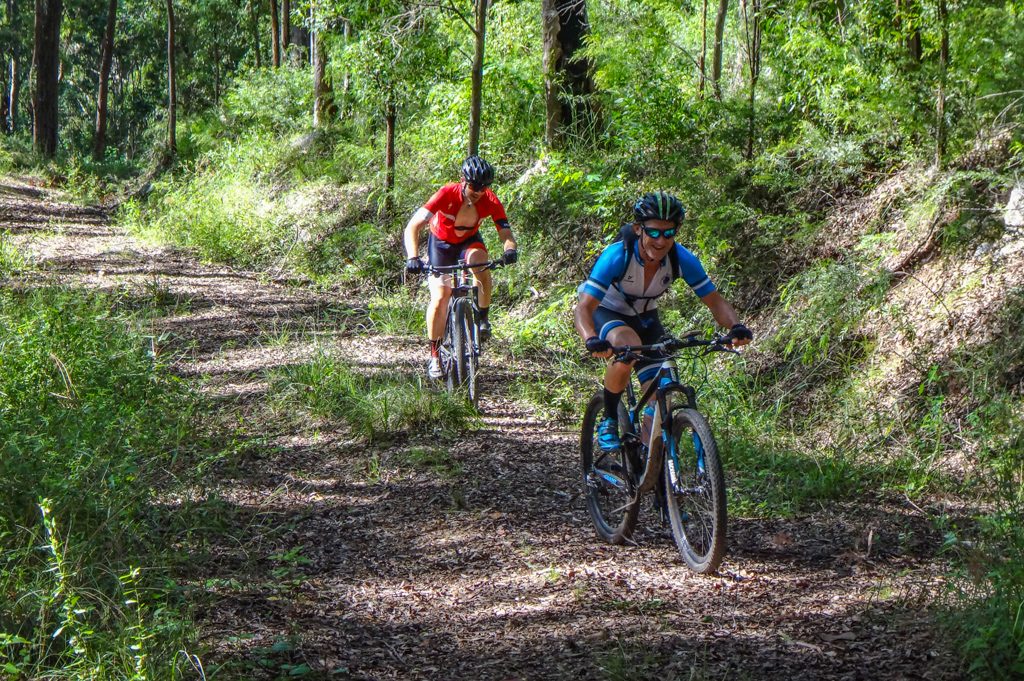 As we skidded downwards, we met Darren and Ben riding up Augies Road.

I stopped and admired their effort.

“You guys are amazing,” I yelled.

“I can’t stop to talk. My legs are in the zone,” Darren called replied.

They ended up completing a gruelling 113 kilometre epic in ten and a half hours. I don’t know how they did it. 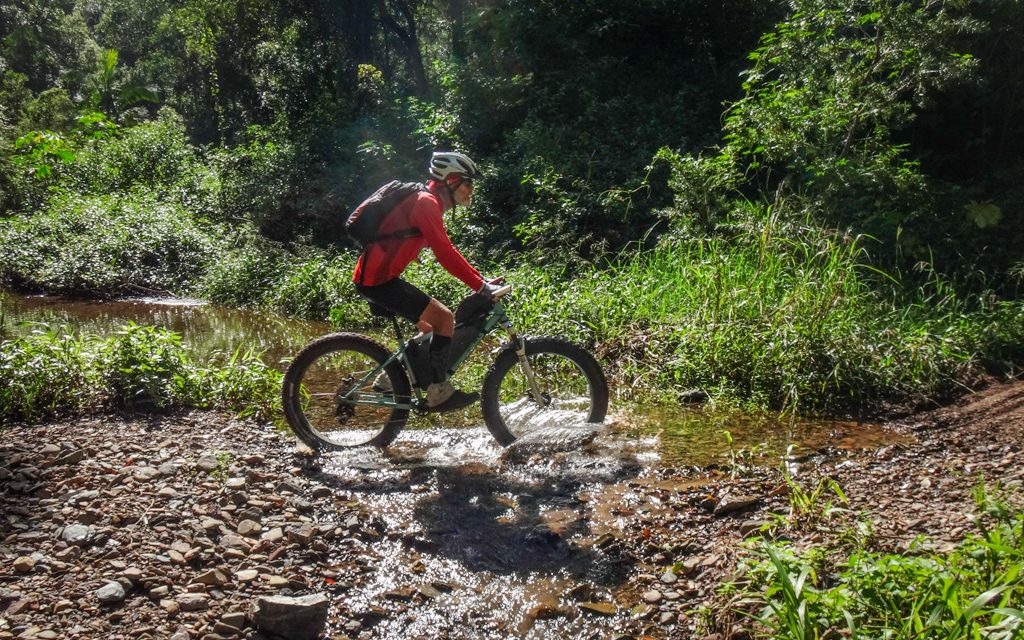 At the bottom of the long descent we splashed through Cabbage Tree Creek. 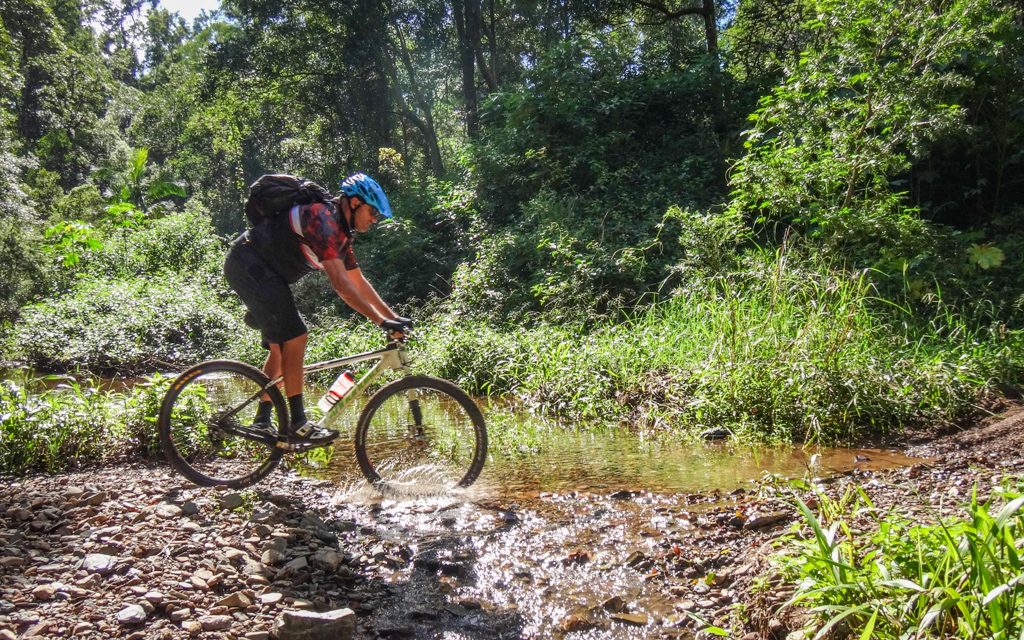 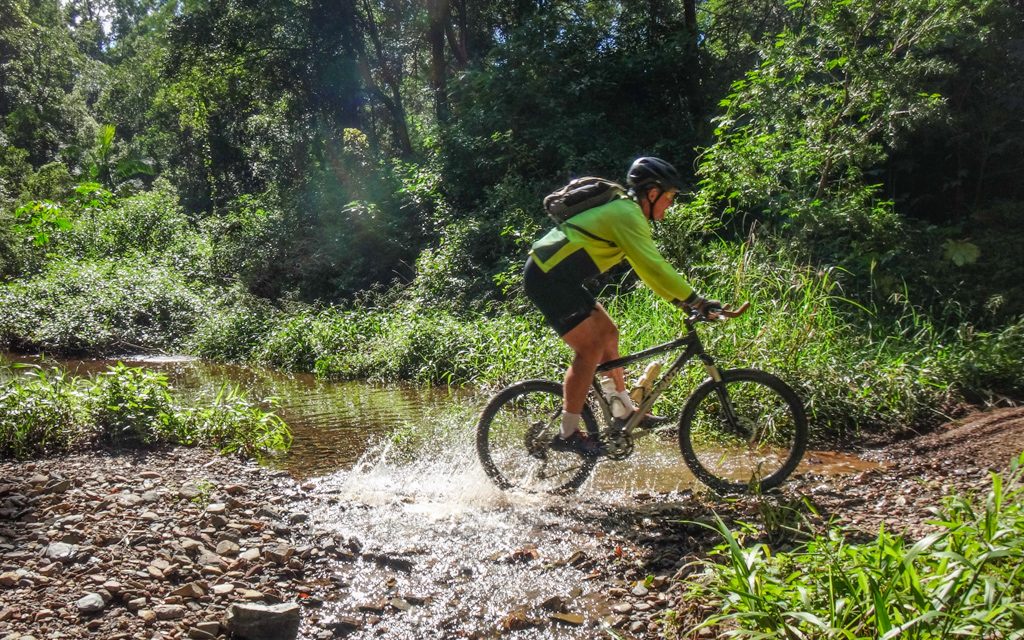 The track crossesd the creek many times. 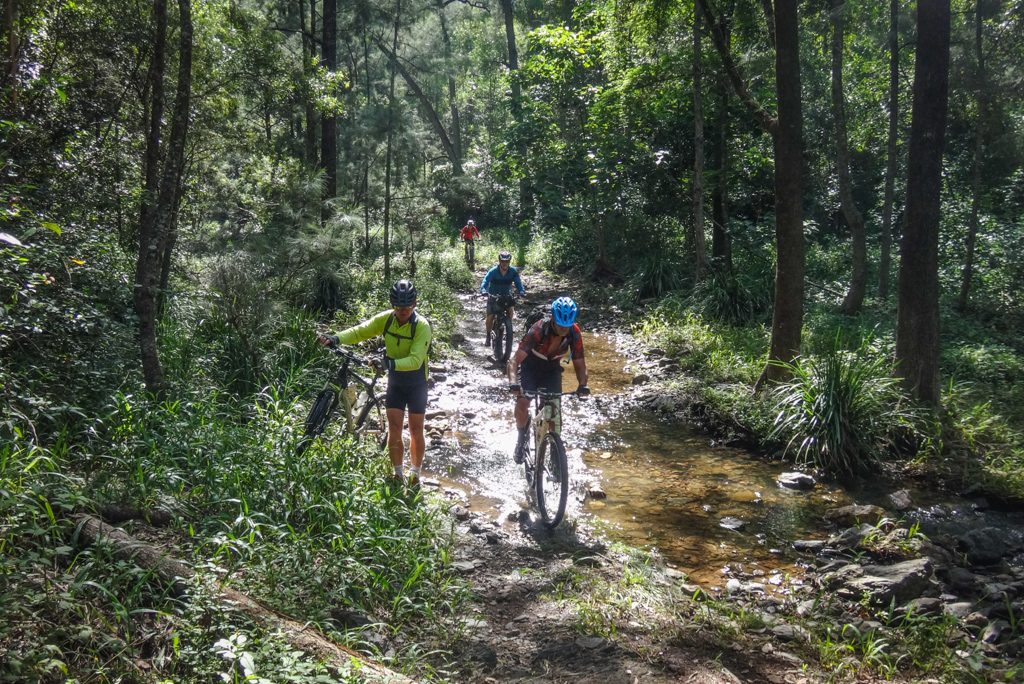 Several years ago I would have tried hard to avoid walking through the water in order to keep my feet dry. Today I “soaked it up” 🙂 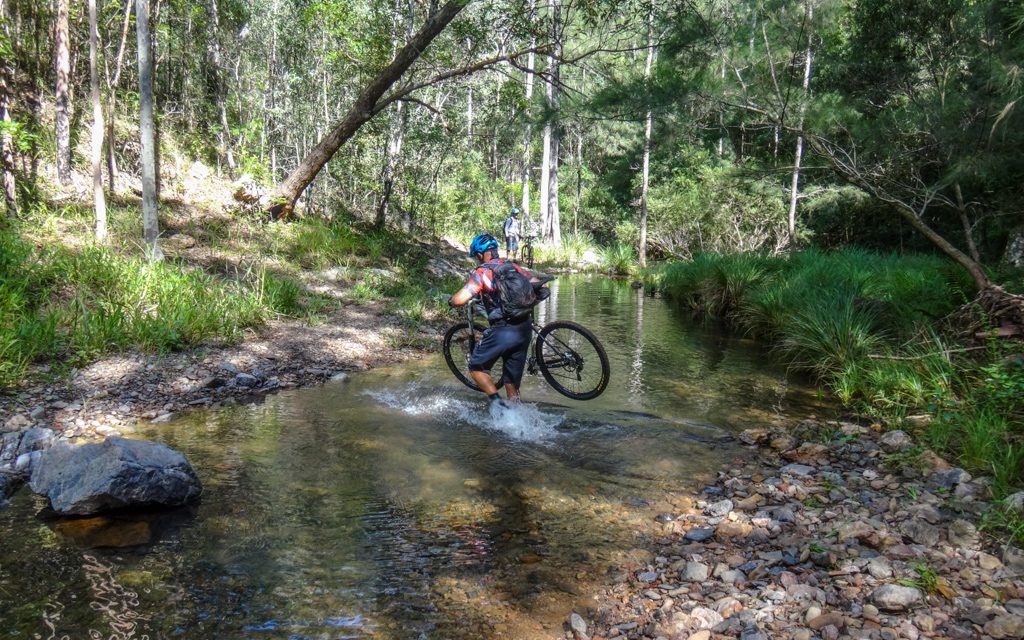 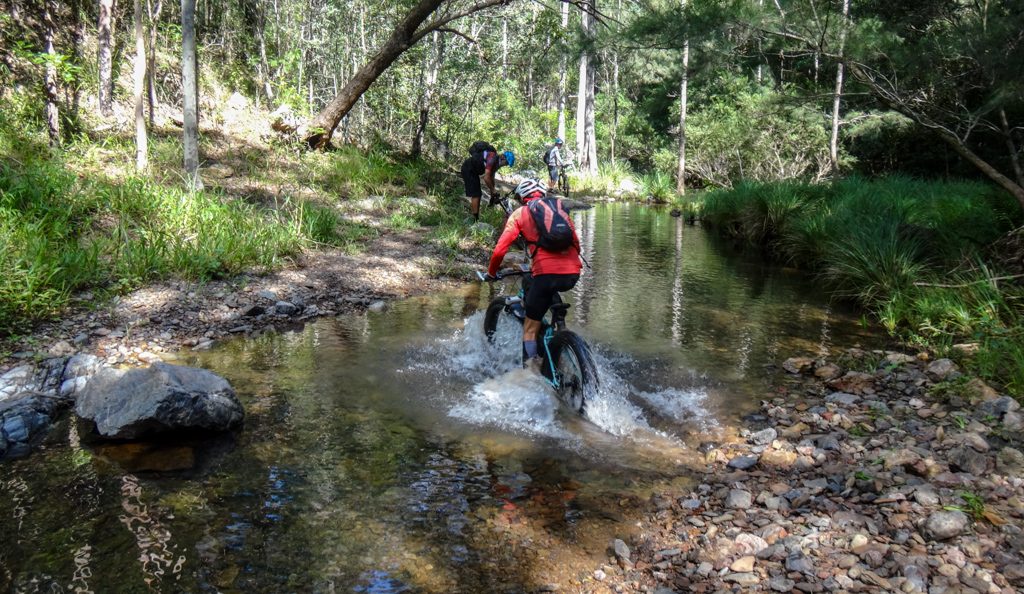 Some of us walked the bikes through, some pedaled. 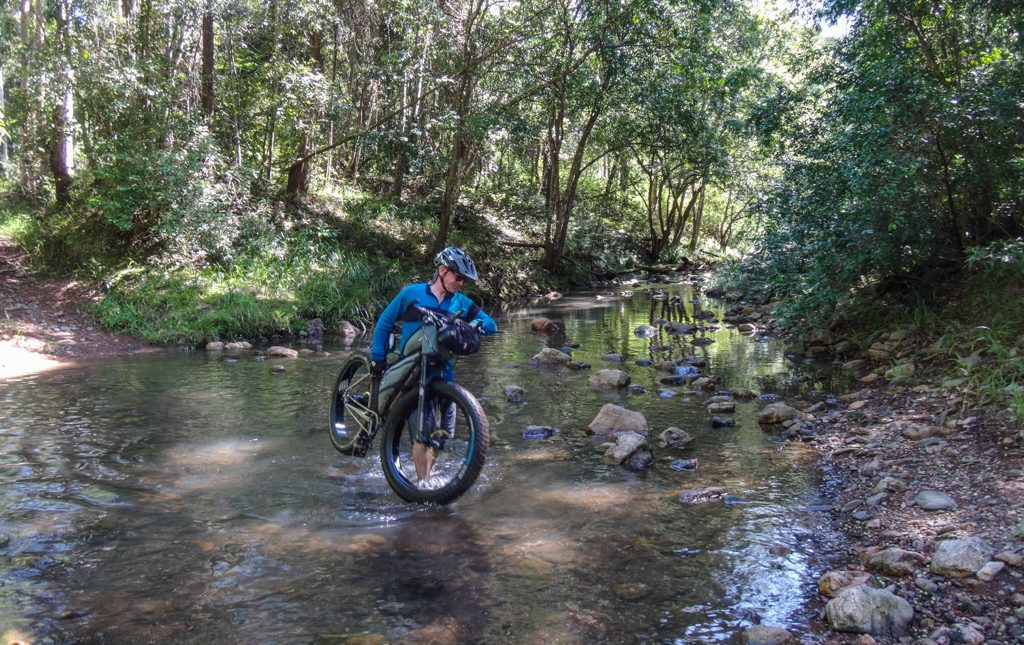 This is the perfect place to visit after rain.

The cobbles in the creek crossings are tricky to ride over at times, unless you have fat tyres 🙂

After numerous creek crossings, we emerged at the large grassy campground behind Lake Manchester. 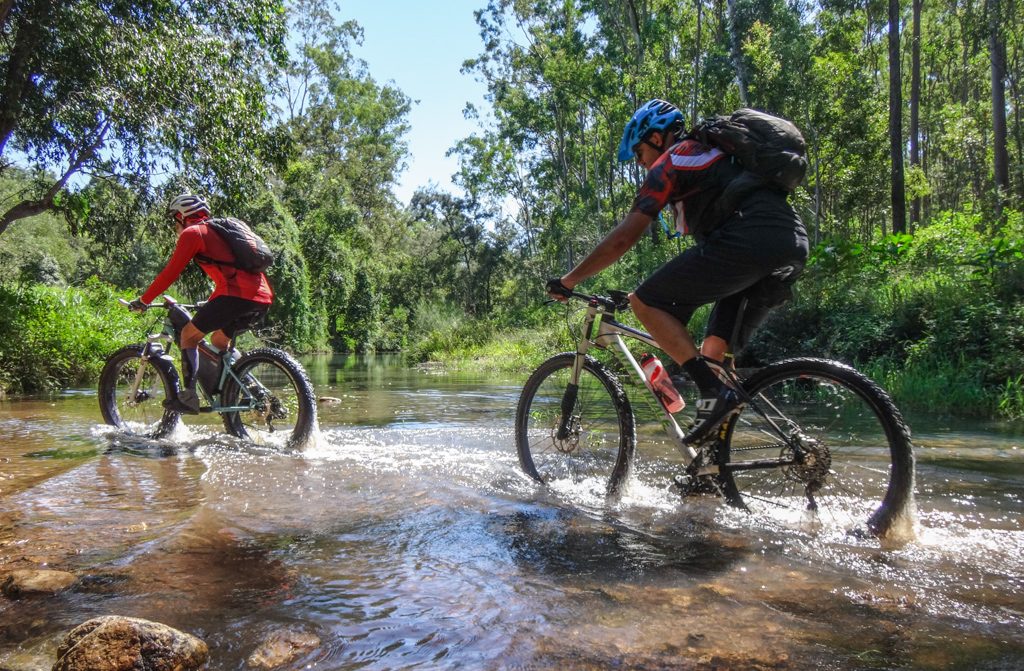 We then followed Branch Creek northwards, through more causeways, back towards the base of the range. 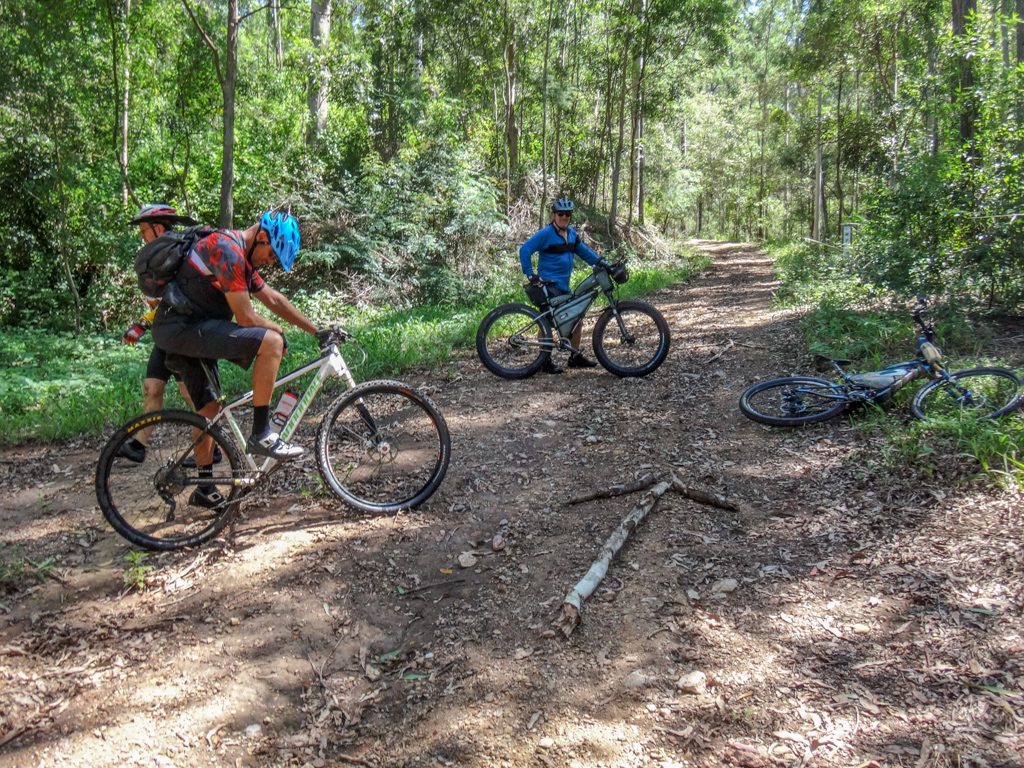 Calum and Bruce rode ahead of us on Branch Creek Road, and took a wrong turn.

We weren’t sure exactly where they were, so decided to make an arrow out of tree branches to point out the direction in which we had gone, in case they came back this way.

They eventually did, saw the branch, and managed to follow us up the hill. 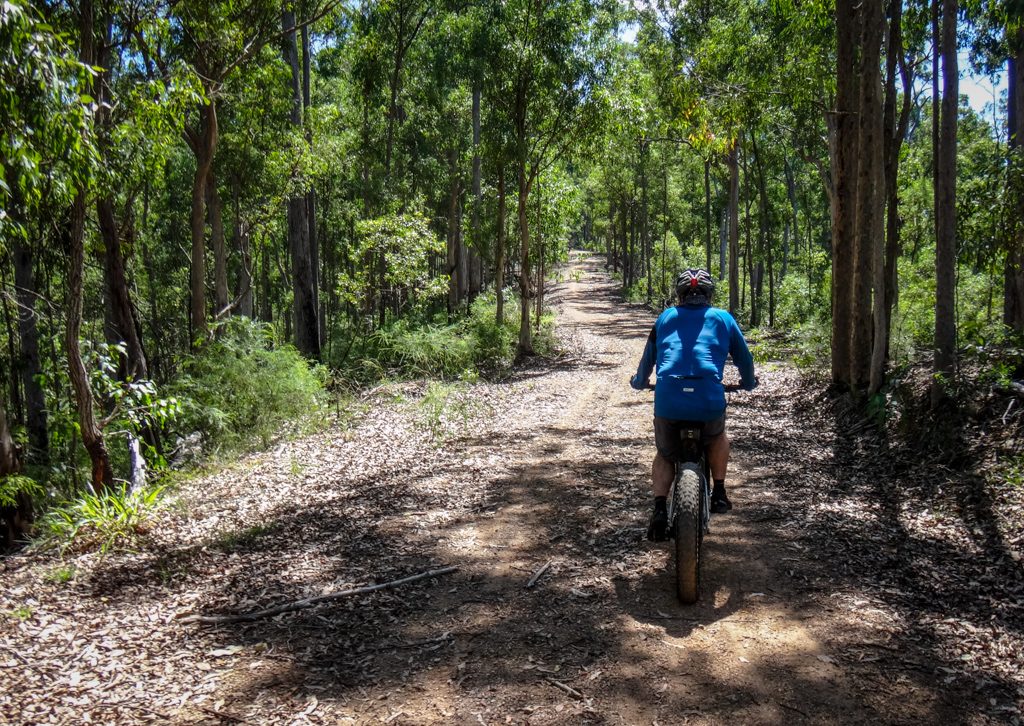 “This is one of the gentler climbs back up the range,” I had assured everyone beforehand. 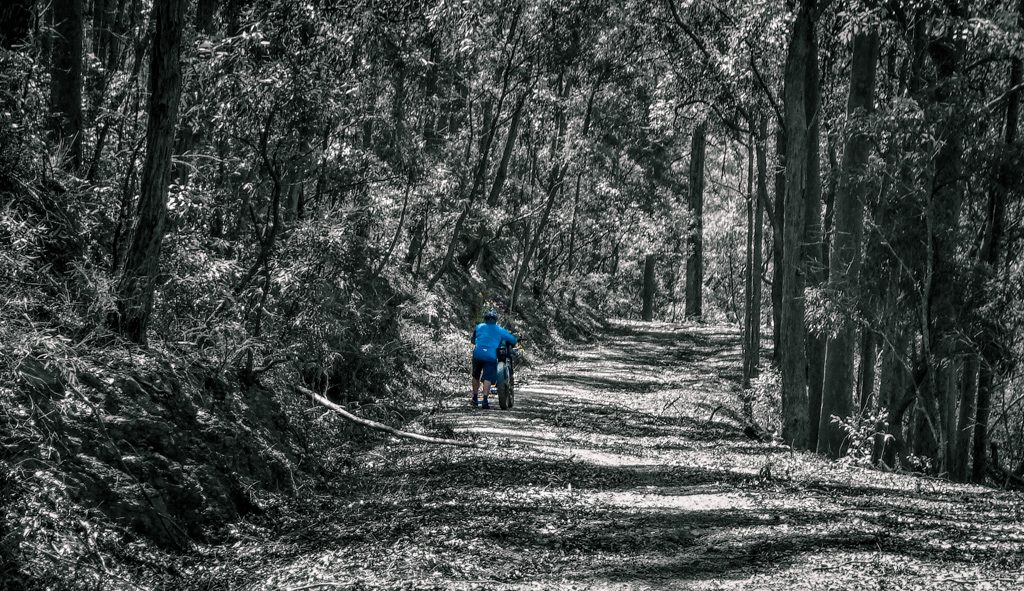 I was wrong. It was much steeper than I had remembered.

We walked up many of the steeper bits, joking that someone must have come through here with a grader to make it more steep. How else could we explain the increased difficulty of riding up this hill compared with how it felt when we were five years younger? 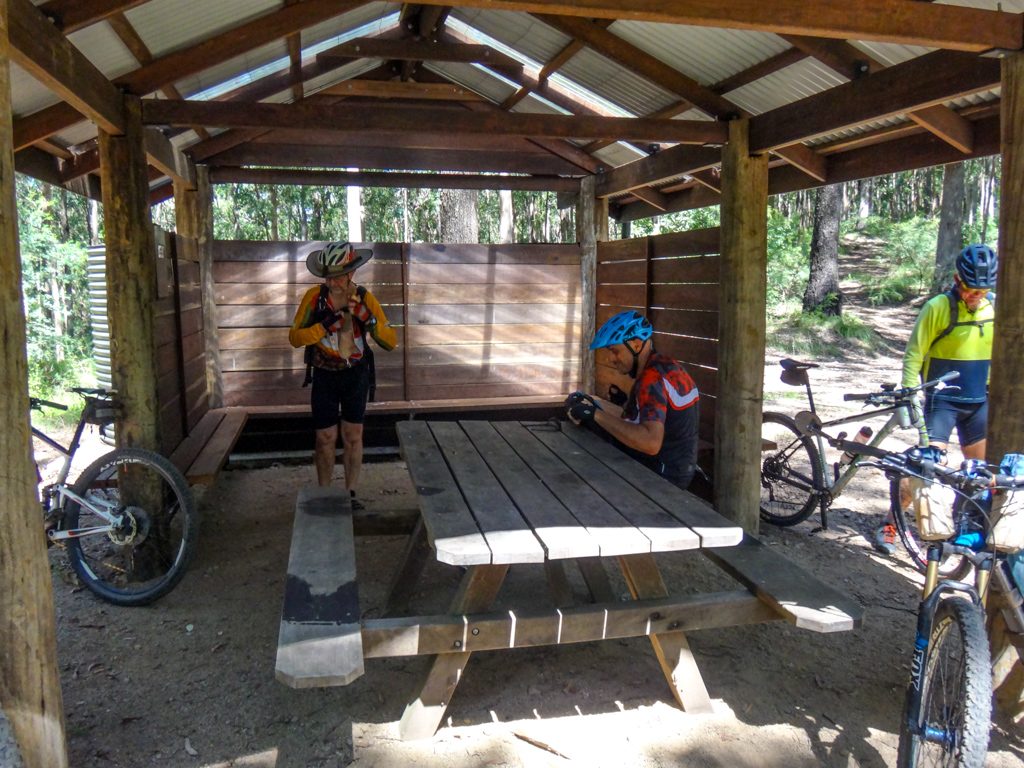 After about ninety minutes we reached the top, and stopped for a rest in the new shelter on Dundas Road. 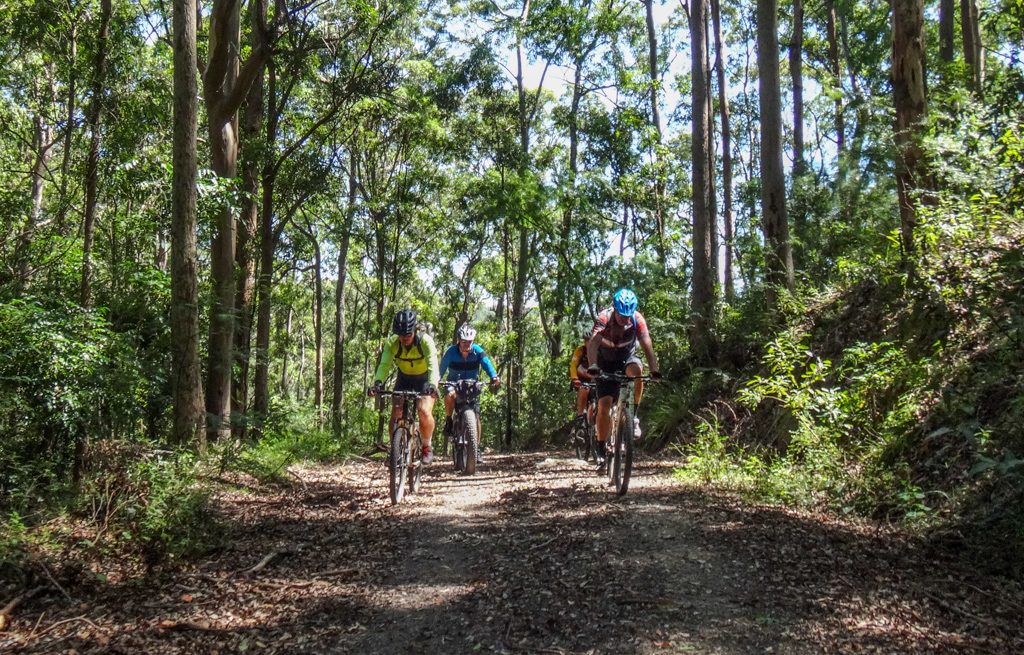 “I think this must be the final climb of the day,” I said just before one more hill.

No one believed me.

It was a tough ride, but it was also a lot of fun.

We rode about forty kilometres in six and a half hours, including breaks.

During that time we climbed about 1,400 metres in elevation, and I burned about 3,500 kcal.

It’s much easier in the cooler months.

And (in hindsight) I think Lightline Road might be an easier way back up the range compared to Cabbage Tree Range Road.

Thanks Darb, Eric, Paul, Russel, Calum and Bruce for a fun day out.

Can we do something a bit easier next week please? 🙂