As part of my project to explore the site of the old railway line between Ferny Grove and Dayboro I cycled out to Ferny Grove today. Today this is the terminus of the Queensland Railway’s Brisbane to Ferny line. But before 1955 this line went all the way to Dayboro.

The old railway track rises out of Ferny Grove and winds slowly up Camp Mountain. Even though the gradient is low (less than 5%) the train would have struggled slowly to the crest of the hill, after which it would pick up speed as it rolled down into Camp Mountain Station. In May 1947, disaster struck. After reaching the top of climb at Camp Mountain, one train accelerated too quickly downhill and crashed at this site as the track curved sharply to the left. 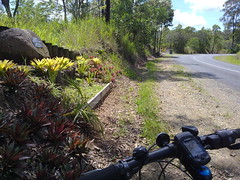 16 people were killed as carriages telescoped into each other.

Today it still stands as Queensland’s worst ever rail disaster, and the second most tragic rail disaster in Australia’s history after Granville.