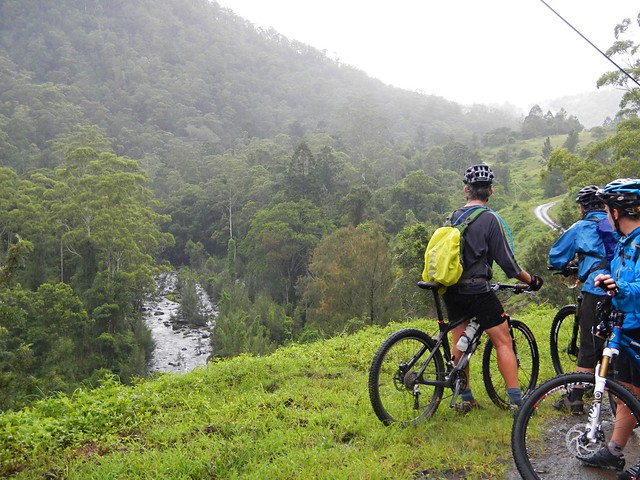 The purpose of todays ride was to follow a route which connected up a previous ride Duck Creek with the small rural town Rathdowney via some picturesque country around Christmas Creek. Christmas Creek is in a rugged valley in the Macpherson Range south of Brisbane, near the state border. It’s the traditional country of the Mununjali Aboriginal People who are part of the larger Yugambeh-Bunjalung language group. 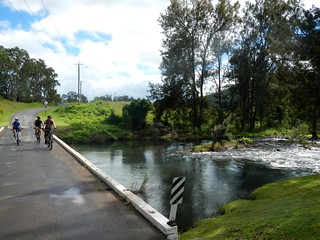 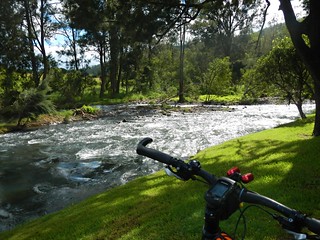 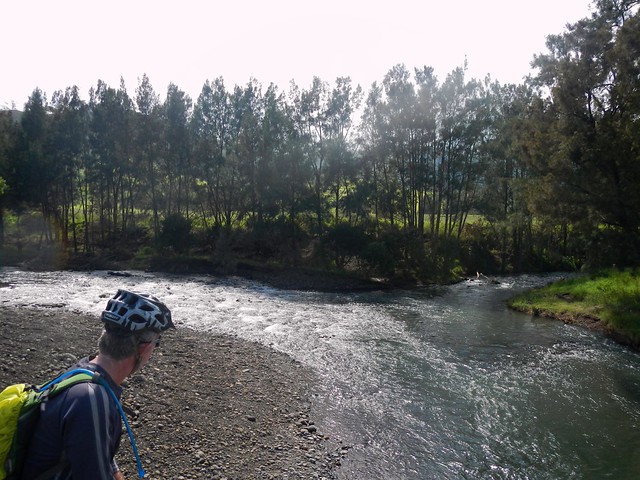 We started from Duck Creek in Kerry and followed some quiet paved roads south along the swollen Albert River. Recent rain has increased the flow in many of the local rivers and creeks – they look spectacular. 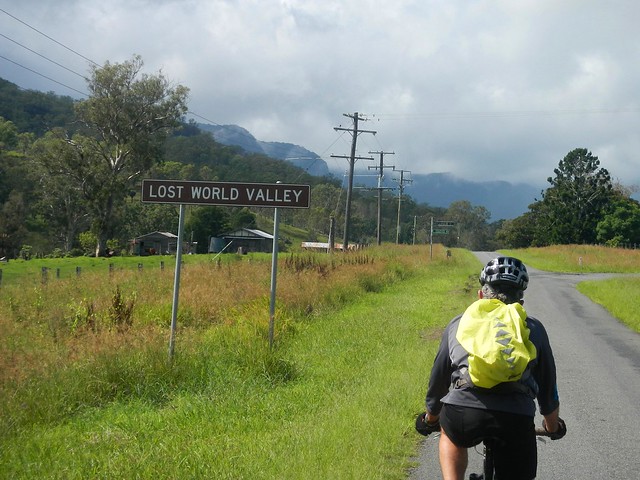 If you keep heading south in this part of the world, you come up against the impenetrable wall of the Macpherson Range and a number of rugged valleys such as the “Lost World” valley. 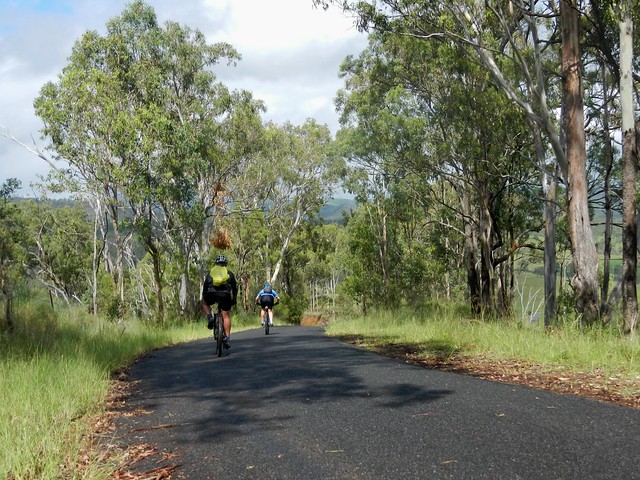 Our objective was is the next valley to the west, so we had to grind up and over the Darlington Range into to the Christmas Creek valley. 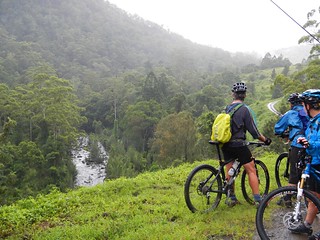 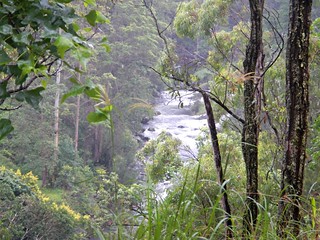 After more that 25km of paved roads it was a delight to finally arrive at the muddy tracks that followed the upper reaches of the creek. Cliffs shrouded in clouds reared up on either side as the creek raged over the rocks below. 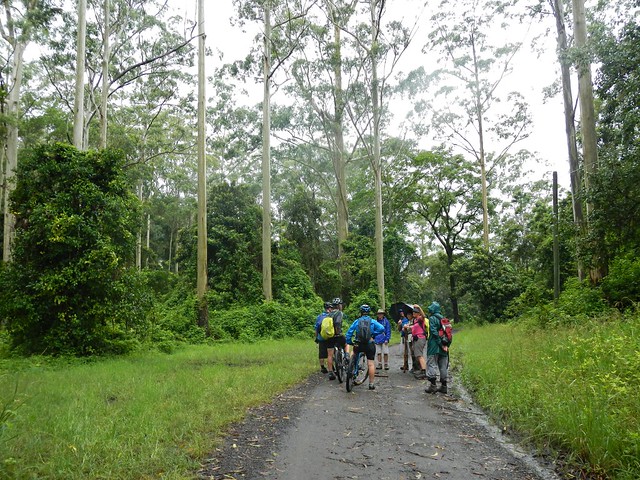 Much of this area is a popular hiking destination. We met up with a group of enthusiastic hikers who didn’t mind braving the intermittent rain and muddy trails. “It’s a bit wet, isn’t it?” I asked one lady. “Yes, but it sure beats sitting at home watching TV” she replied. I couldn’t have agreed more. Incidentally, I’ve never met a grumpy hiker. Or a grumpy mountain biker. So if you’re feeling a bit depressed…. 😉 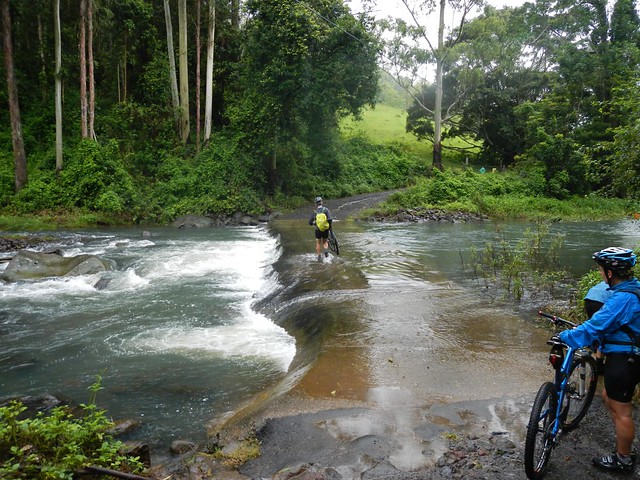 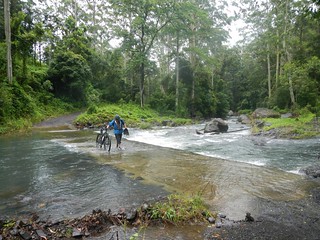 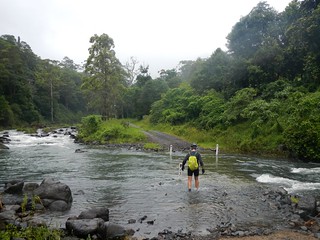 After last week’s adventure through flooded creeks, Eric joked that he’d be disappointed if he didn’t get his feet wet today. We didn’t let him down. 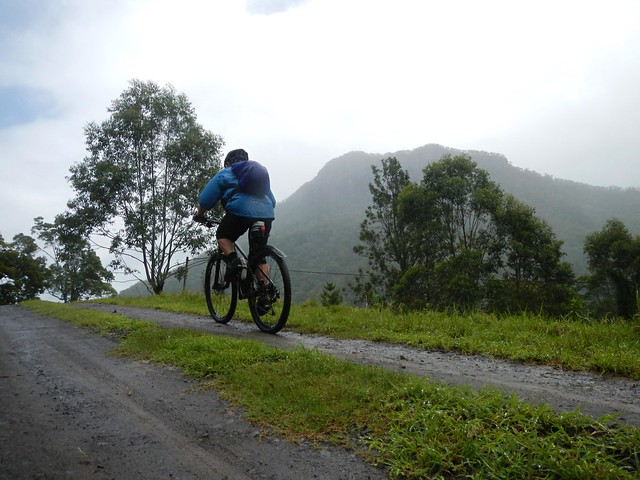 At this point we decided it would be best to avoid the more flooded sections of the creek. Unlike last week, it wasn’t necessary for us to attempt this crossing, and there was only a short section of track on the other side, so we turned around and headed back up over the hills. 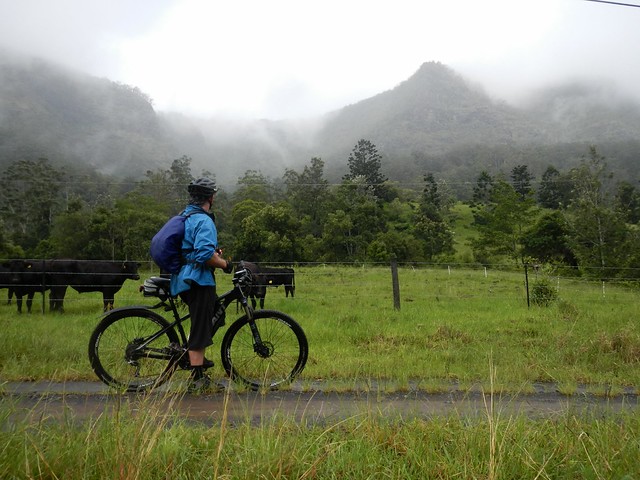 On the southern side of the track, the imposing cliffs seem un-scaleable. In fact, in this spot, almost 75 years ago to the day, they were the site of a fatal plane crash and an amazing rescue mission by Bernard O’Reilly. (To read more, click on the following newspaper clipping from the Sydney Morning Herald in March 1937).

Bernard O’Reilly was a hero. He climbed these mountains to rescue two survivors of the Stinson plane crash, and them brought them back on stretchers by following the ridgeline at the top of these hills. Everyone thought it was an impossible task – but he succeeded because of his bushcraft skills, determination, and intimate knowledge of the land. 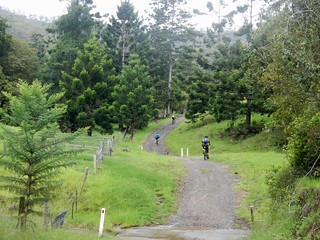 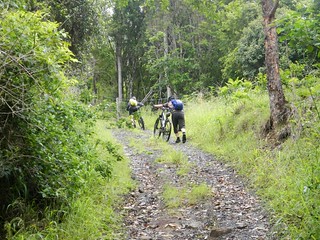 Inspired by O’Reilley’s bravery, we thought it would be worth having a look at the final section of the “Stretcher Track”. We rode / pushed our bikes up the steep slopes of “Neglected Mountain” following the track that O’Reilley used to bring the survivors down. It was tough going. 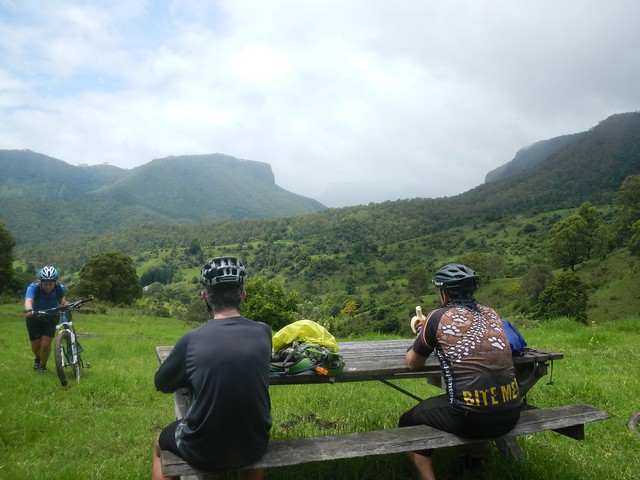 After battling ankle-deep mud, and impossibly steep gradients, we made it about half-way up the hill and were able to enjoy lunch and some wonderful views of the valley to the east. 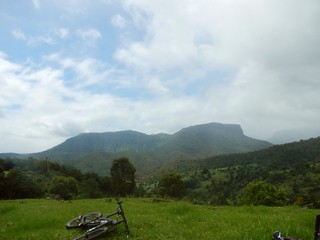 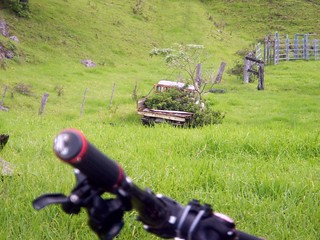 I have no idea how this truck got up the hill, but it looks as though it died after the stress of the trip. 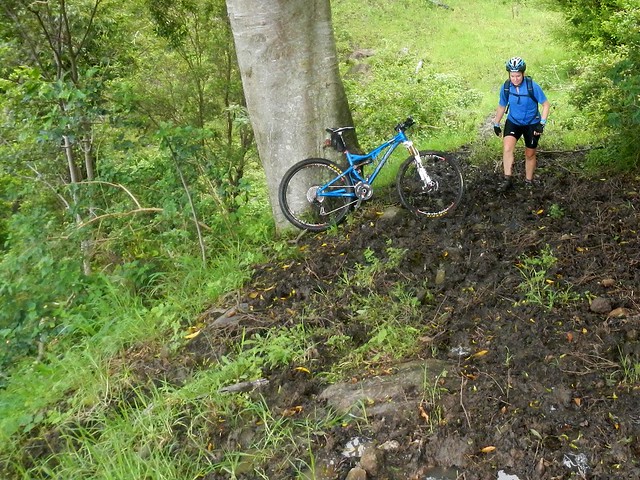 Cattle and wet weather have recently made the track a quagmire, so we decided to turn around at this point and enjoy the slippery ride back down the hill. 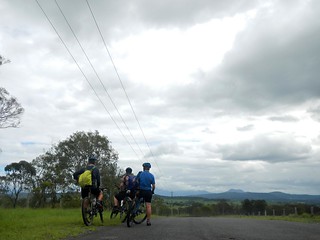 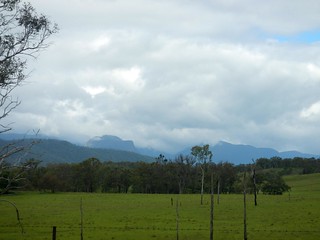 After the rigours of the “Stretcher Track”, it was relaxing to ride back to Rathdowney on a few more quiet back-roads.

Thanks Becca, Eric and Darb for a fun ride!

NOTE: I lost my GPS after this ride, so this is Darb’s track log.

One Reply to “Christmas Creek”