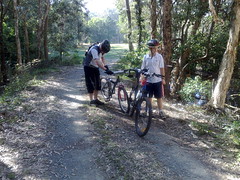 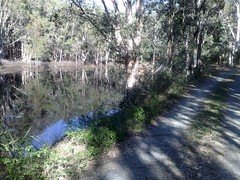 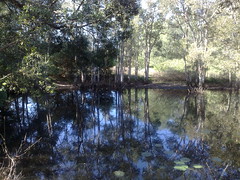 Steve G and Harrison out exploring with me this morning. We found some really quiet trails and ended up doing a leisurely 25km.

Thanks for being patient and going slower than normal for this old warhorse, Steve!

That’s Yebri Creek in the photos. It’s about a kilometer upstream of where John Oxley came ashore in 1823 with shipwrecked convict John Finnegan (who mistakenly thought it was the Brisbane River).

It’s at this creek in 1824 that some convicts from the new settlement at Humpybong on the Redcliffe Peninsula came for timber. They encountered some Aborigines, one of whom tried to take an axe from one of the timbergetters. Tragically, the Aborigine was shot and killed in return – a single act of violence which tarnished the relationship between Aborigines and Europeans for decades.