Heavy rain had lashed Sout-East Queensland for several days, flooding roads and filling creeks. Would it be too wet to ride? There was only one way to be sure… we turned up!


Glen Rock National Park is south of Gatton, in the East Haldon Valley, a picturesque pocket nestled under the towering ridges of the Great Dividing Range. 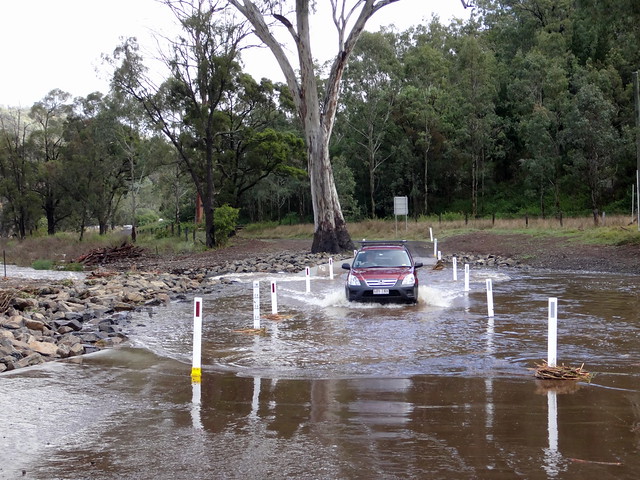 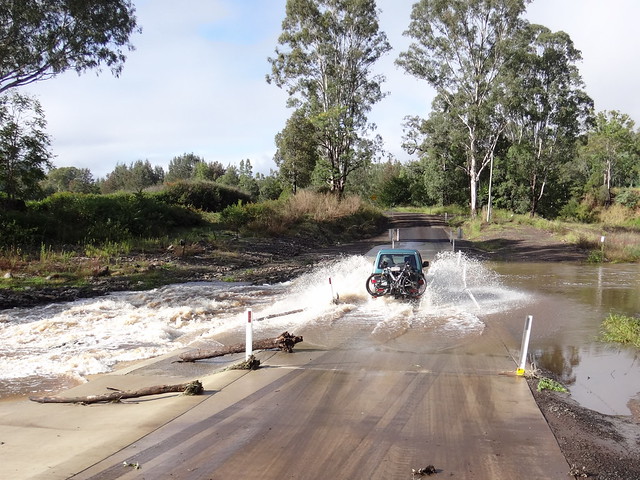 While driving in, we got out of the cars and carefully checked the causeways before driving through. Although water was over the road, it wasn’t too deep, and wasn’t flowing too fast. 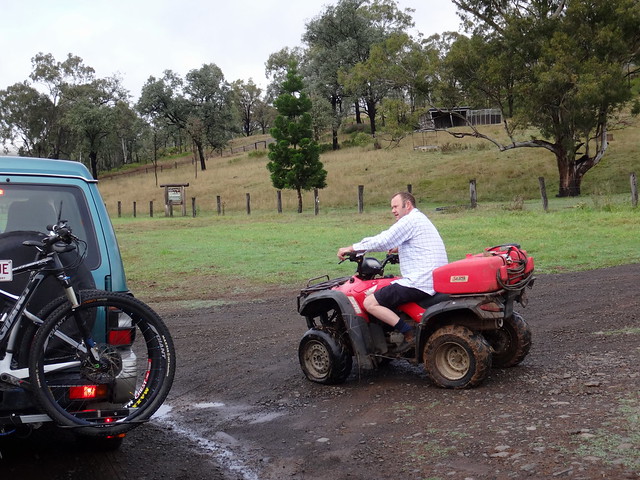 We sought some advice from a local land owner who assured us we’d be able to get through the crossings. 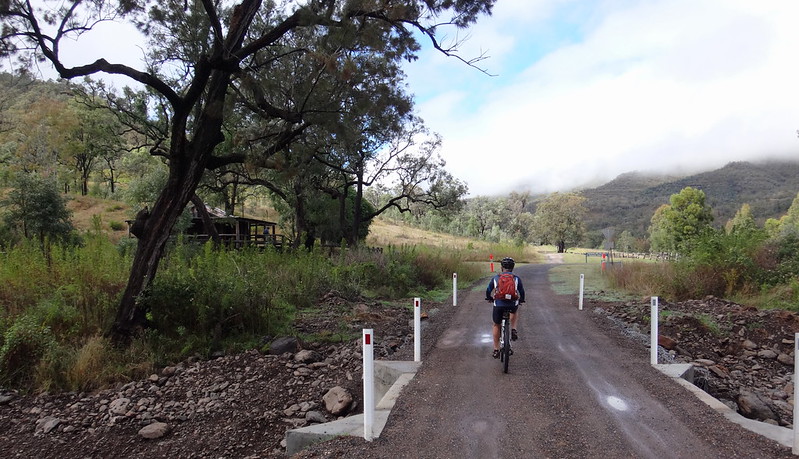 Our plan was to ride as far up the East Haldon Valley as we could, checkout Horseshoe Falls, and then return via the Lower Machar Track – a rugged track in the foothills above the creek. 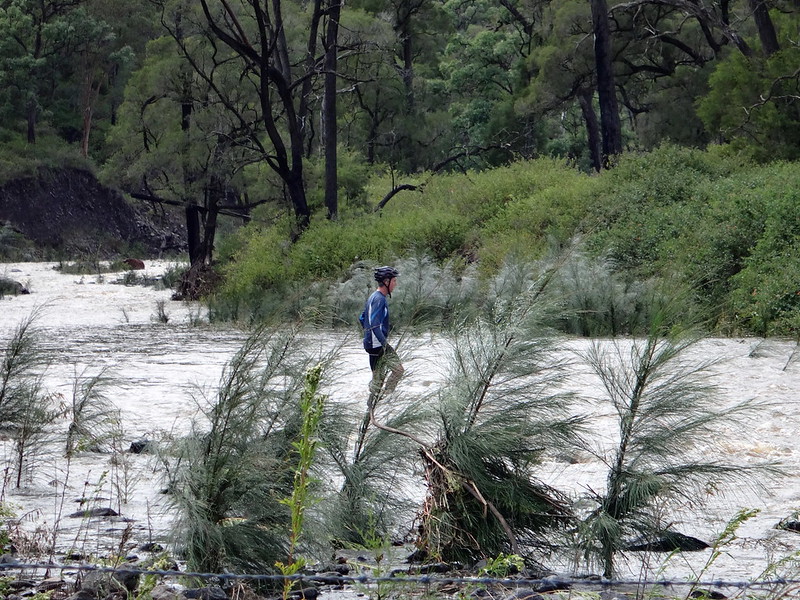 But the first challenge was to get safely across the flooded creek with our bikes. We agreed not to take unneccessary risks, so we sent Eric across the creek to see if we’d be able to get over while carrying a bike. I’ve learned numerous times to trust Eric’s instincts. When he said he didn’t want to risk crossing the creek while carrying the bikes, we agreed and sought an alternative route. 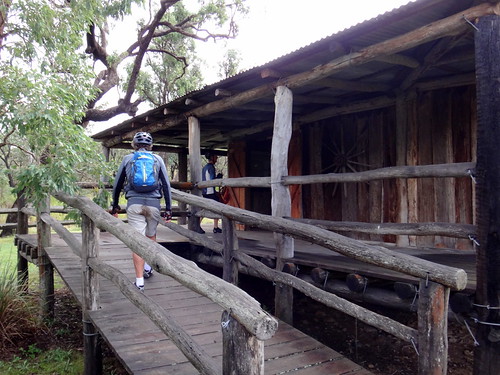 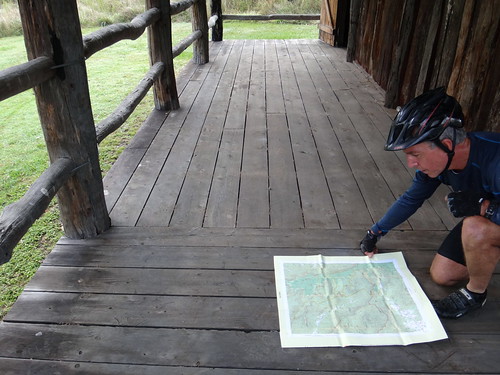 We made our way back to the visitors centre to check out a topographical map that Eric had brought with him. The map suggested there were a few other creek crossings we could try – so decided to have a look around to see what we could find. 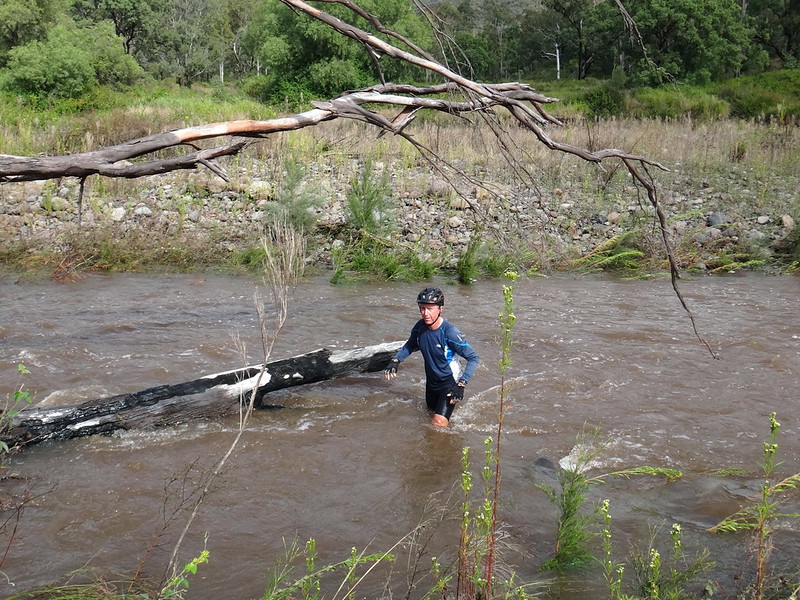 Several times we were thwarted by swift water… 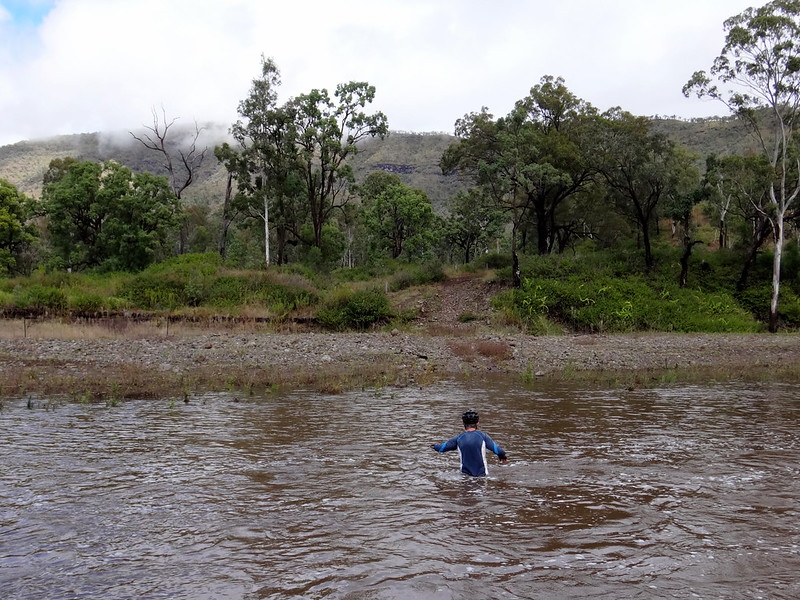 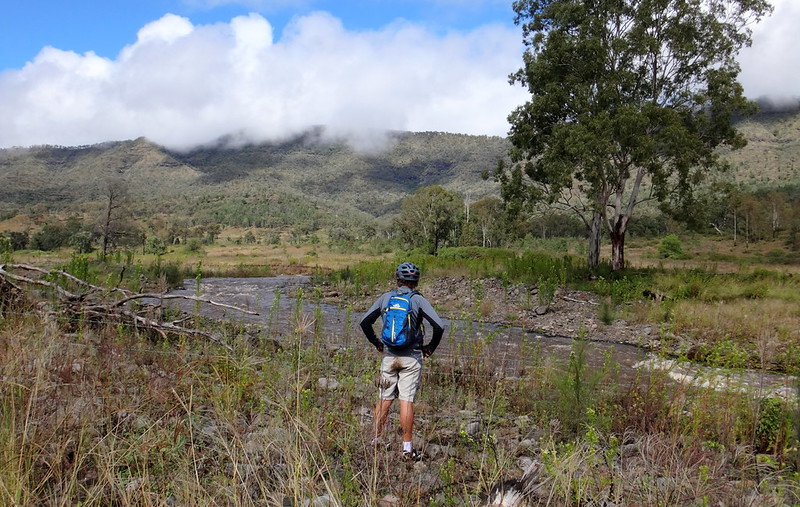 Mike wandered off looking for a place to cross… 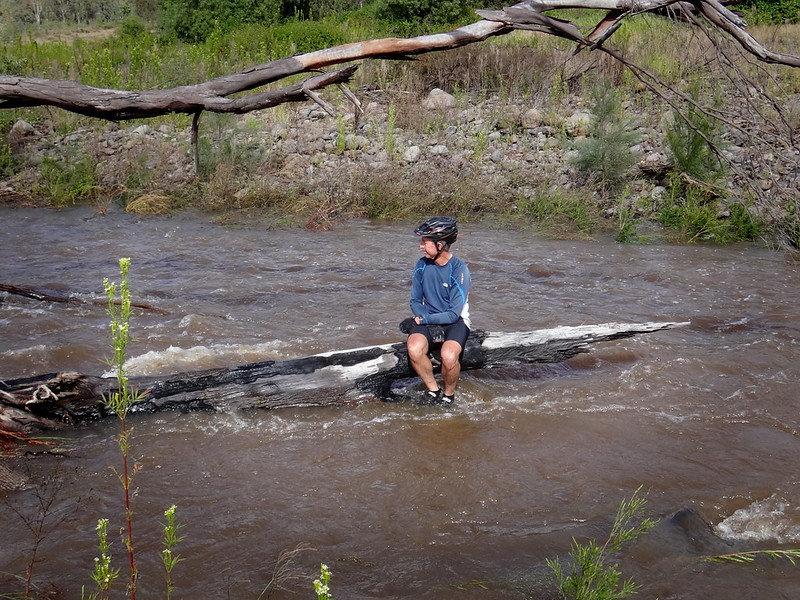 …while Eric decided to cool his heels in the fresh mountain water. 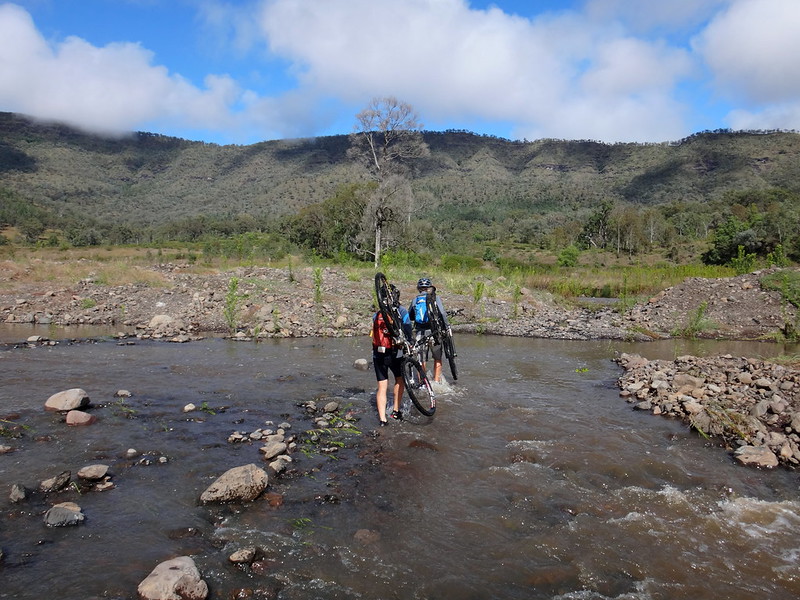 He eventually found a safe creek crossing, and after an hour of poking around we began our ride in earnest.

Todays ride reminded me that “Turning up” despite the weather usually results in an enjoyable adventure – provided we’re flexible about our plans. 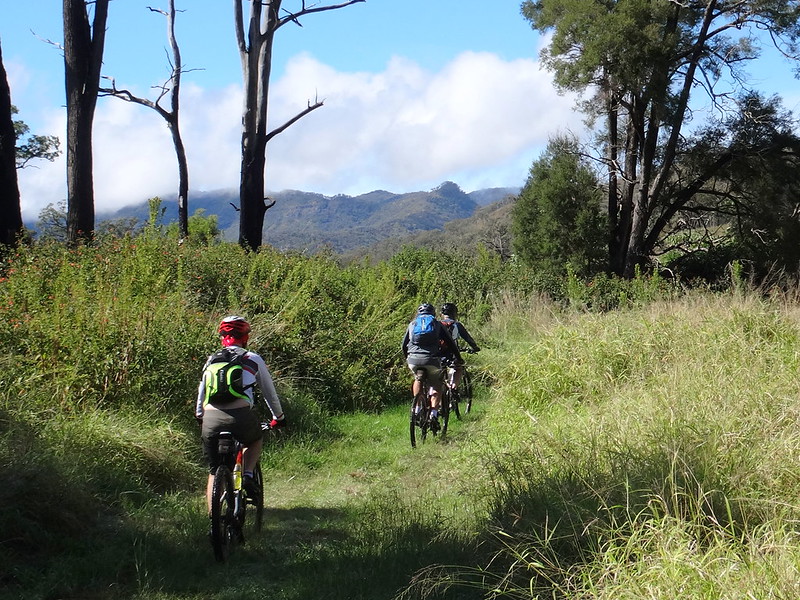 The skies had cleared, the sun was drying up the mud, and the baeautiful East Haldon Valley lay before us. 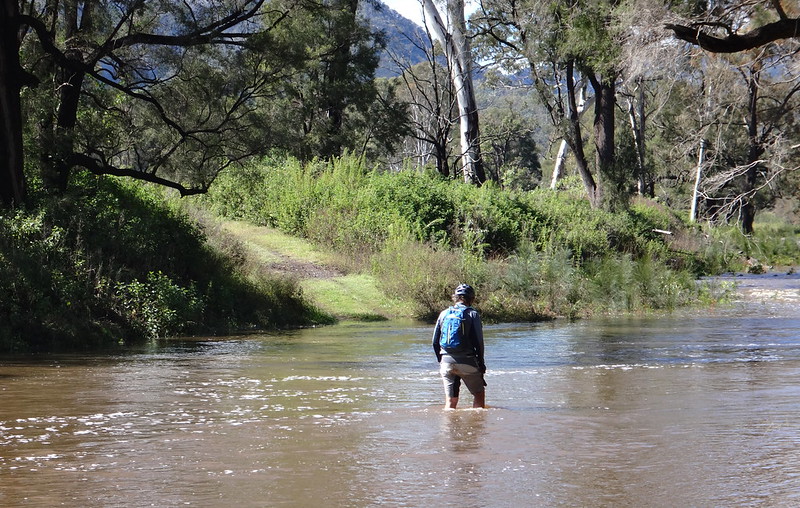 The creeks were still high, and so we re-evaluated our plans at each crossing. Was it safe to cross? Could we carry the bikes over? Would we be able to return this way?

If we were unsure, we’d first send someone through without a bike, so they could test the depths. 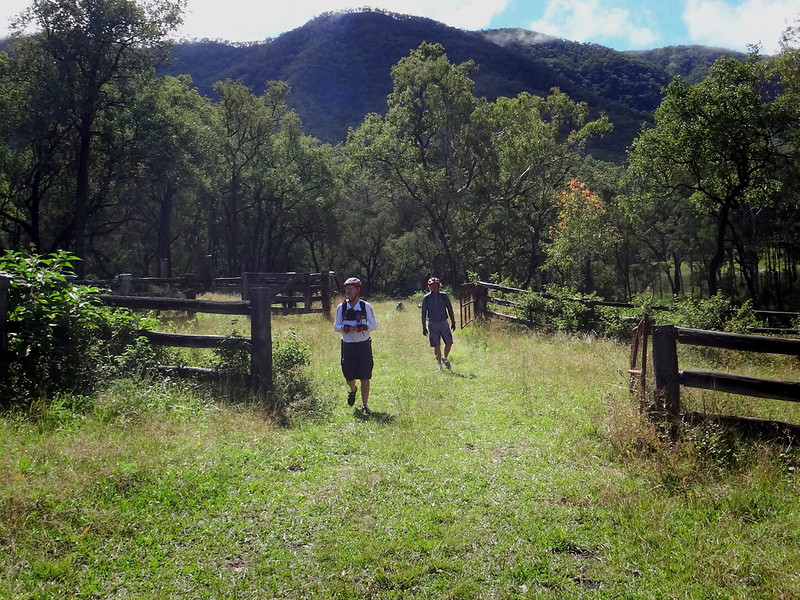 Eventually we arrived at “Abbotts Yards” – an old stock yard halfway up the valley. In the nineteenth century this area was attractive to cattle men. The mountains provided a natural fence for the cattle, which meant they could graze on the abundant pasutre and water, without straying too far. 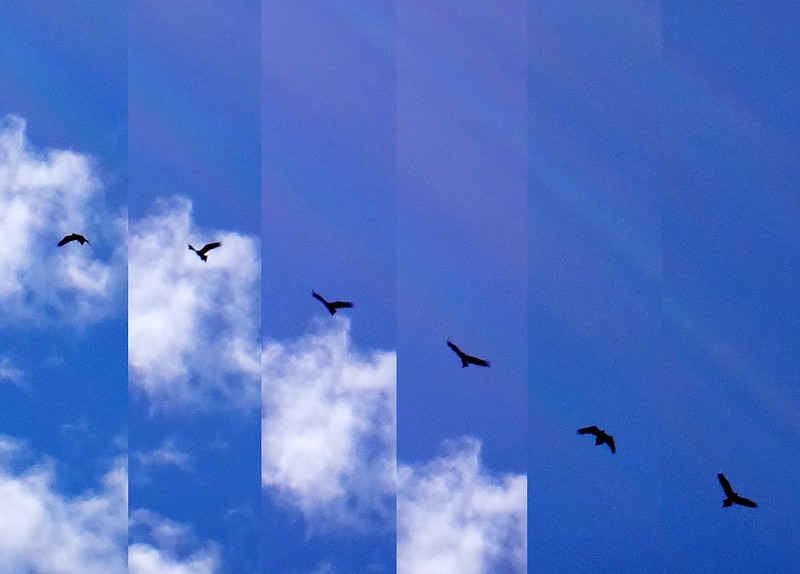 A wedgetailed eagle soared silently overhead in search of prey. 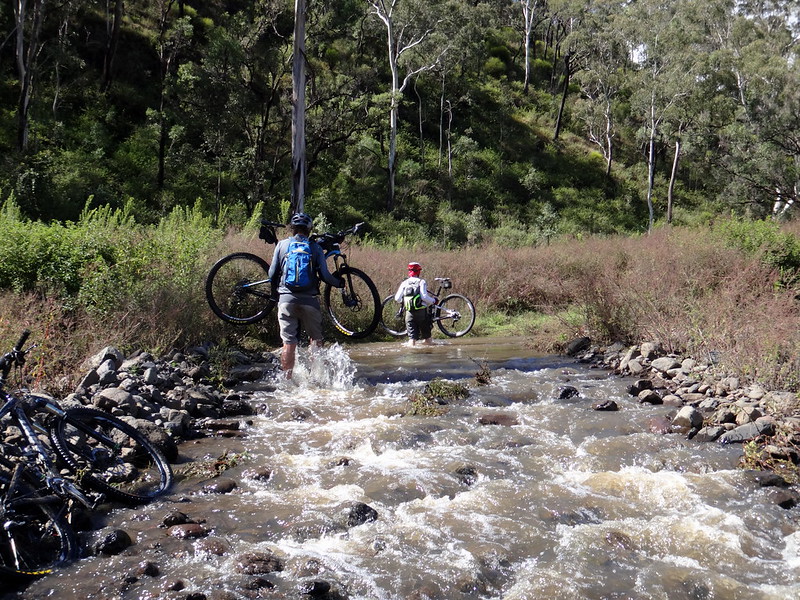 It seemed like we spent about half our time helping each other over creeks, and the other half slowly riding up the valley. 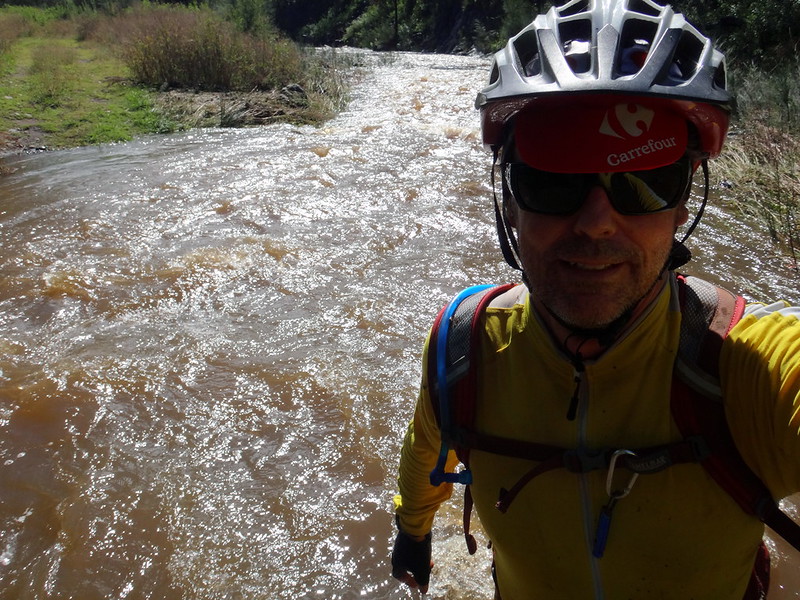 My shoes were soaked – which wasn’t really a problem. The gravel inside them was a problem, however, and I took a couple of opportunities to empty out the annoying stones and save my toes. 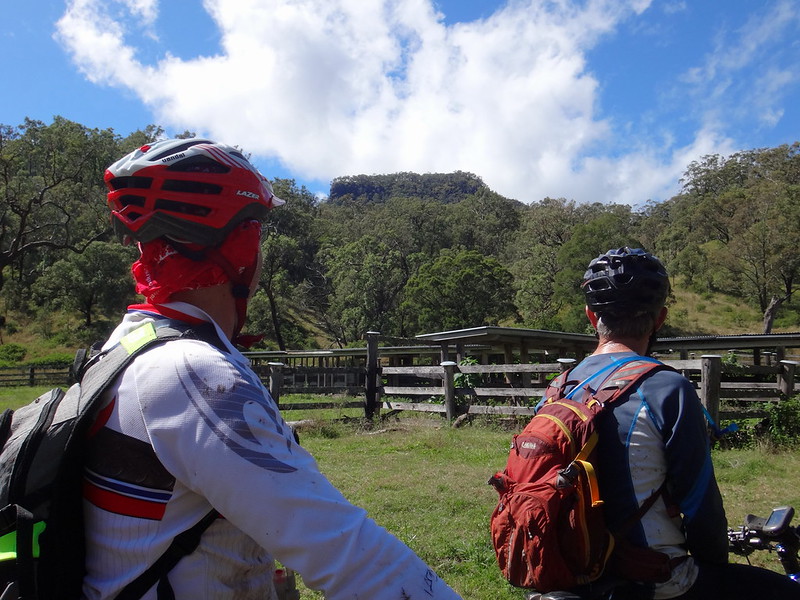 After an hour we reached “Top Yards”: another historic mustering yard futher up the valley, under the strange square-top of Point Pure.

We were making progress, but it was becoming clear we wouldn’t make it to the top of the valley. 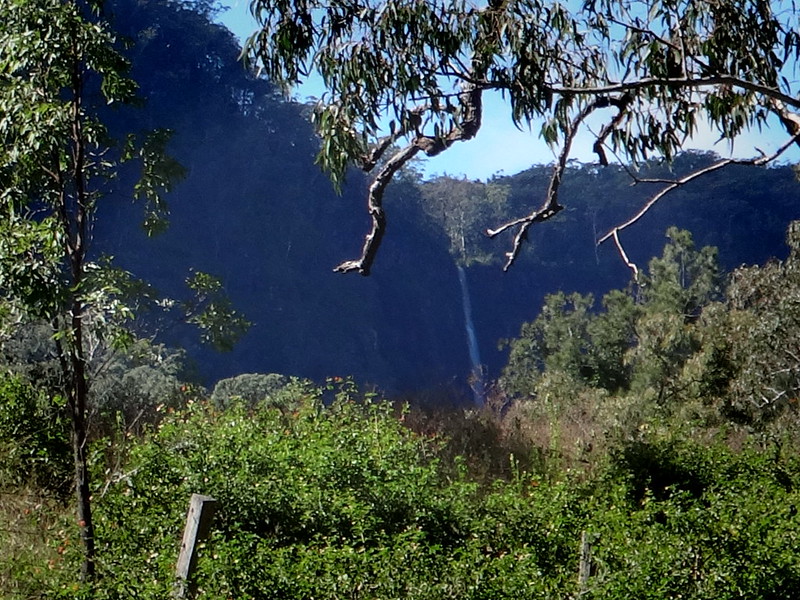 In the distance we could make out Shady Creek Falls cascading over the edge of the mountain. This was about as close as we’d be getting to a waterfall today. 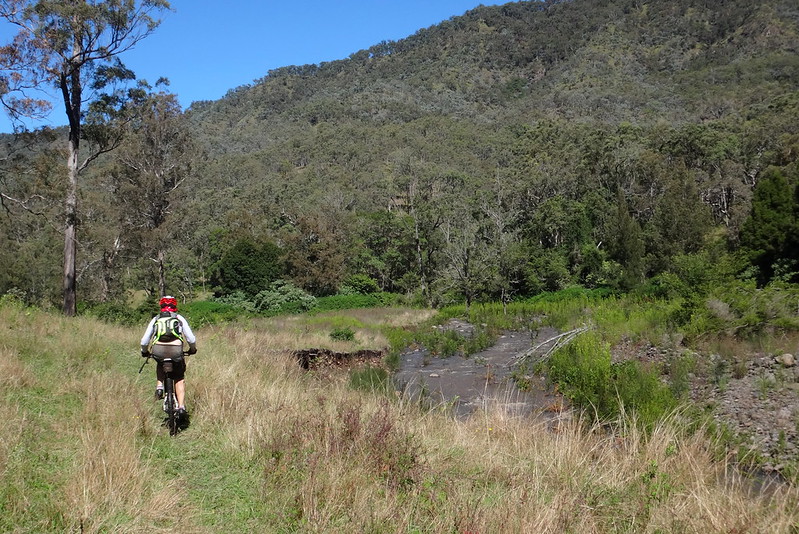 After pushing on for a few more minutes we decided to call “half-way”, turned our bikes around, and started rolling back down the valley.

Thankfully the trip back was much quicker. The creek levels were slowly falling, and the gentle downhill gradient helped us as we rode.

I marvelled at this place as we made our way home. It was beautiful. Tucked away in a hidden valley at the end of a quiet rural road, it’s not the sort of place you’d find accidentally. But the rugged hills and bubbling creek were gorgeous. I was happy to be here, and would love to return.

Although this had been a spectacular clear-skied day, we had travelled less than 25km in just over four and a half hours including breaks. Even in dry weather, this is rough country, so if you’re planning to ride here, it would be prudent to under-estimate your expected progress. 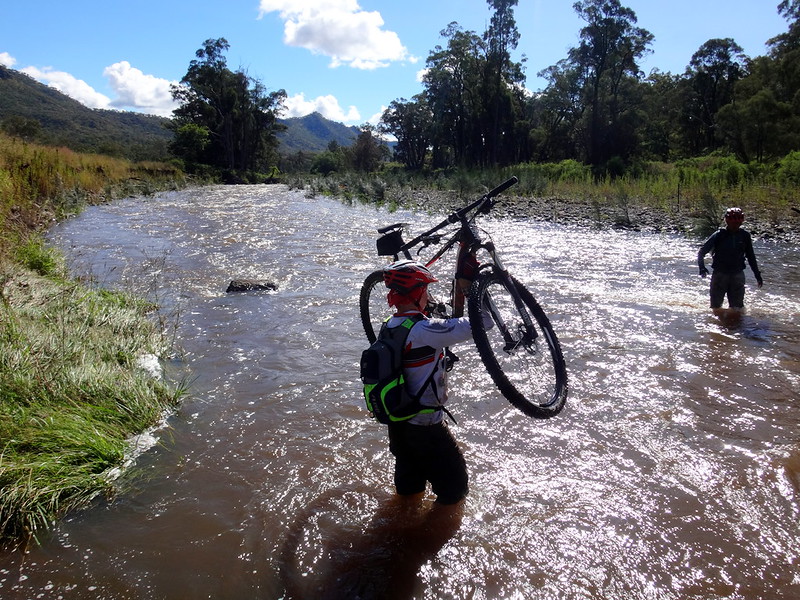 And if you need to cover a lot of ground, it would be smarter to do it when the creeks weren’t so high. 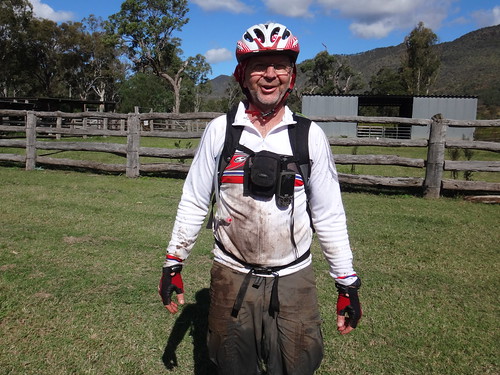 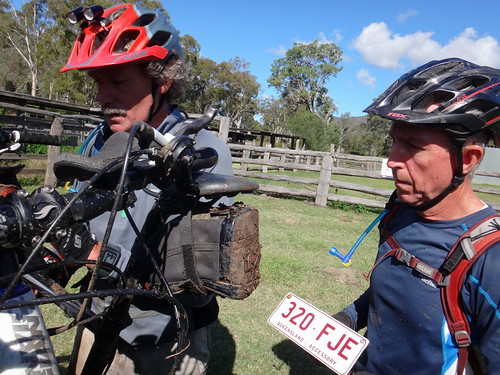 Considering the conditions, I’ll rate this ride 8.5 out of 10 on the tough-o-meter.

We passed through 28 creek crossings. At most of them we had to carry our bikes over our heads. That was hard work. Riding was the was the easy part.

Thanks Eric, Russel and Mike for another memorable day in a beautiful place!