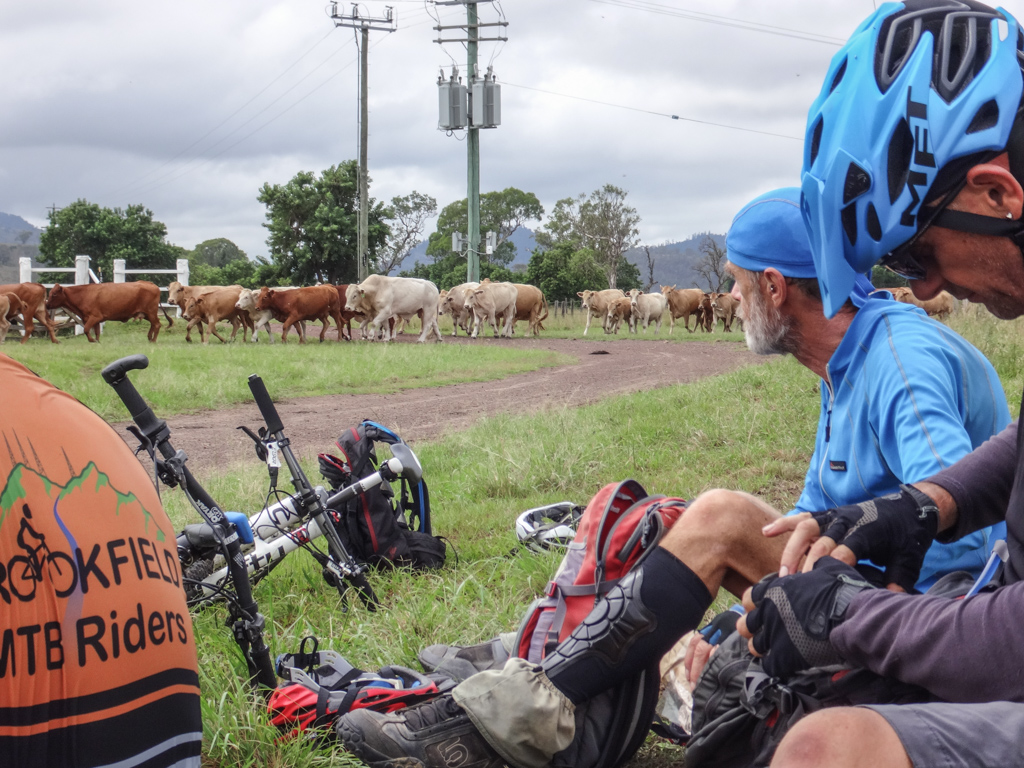 Harlin is a small farming community on the banks of the Brisbane River between Toogoolawah and Moore. I’ve often rushed through there while driving, but today I thought we’d explore a bit more of it, and the wonderful river that flows through it. 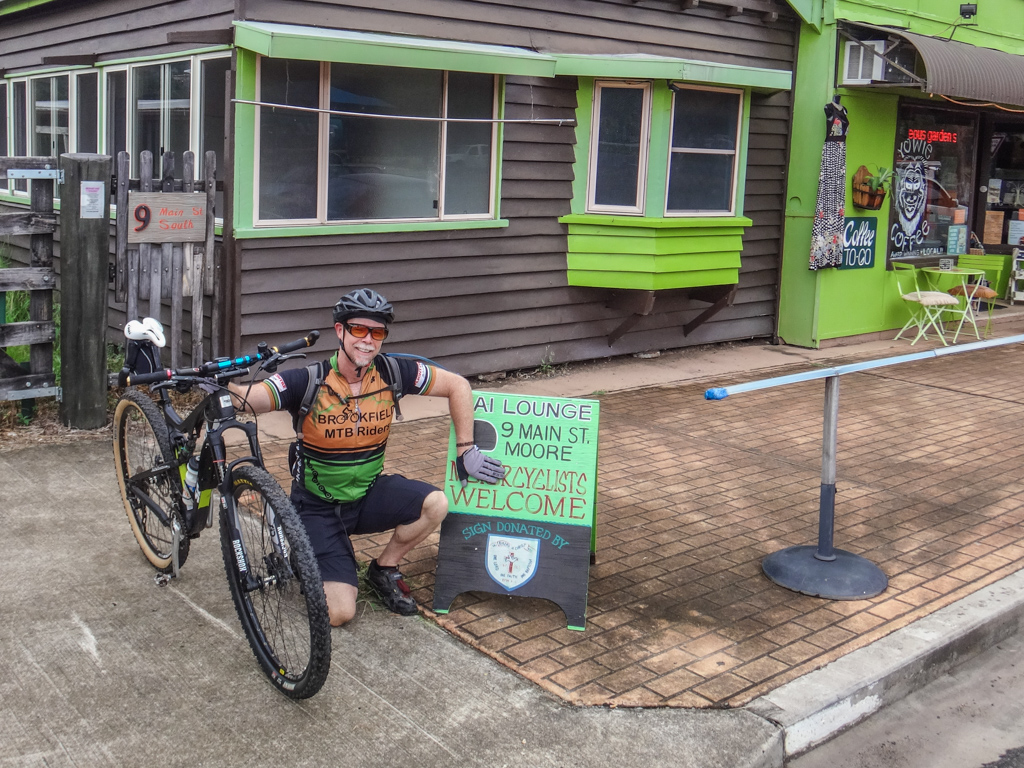 We started our ride in Moore, meeting up with Jason who had camped there overnight.

The local cafe welcomes motorcyclists. Jason assured me they were friendly to cyclists too 🙂 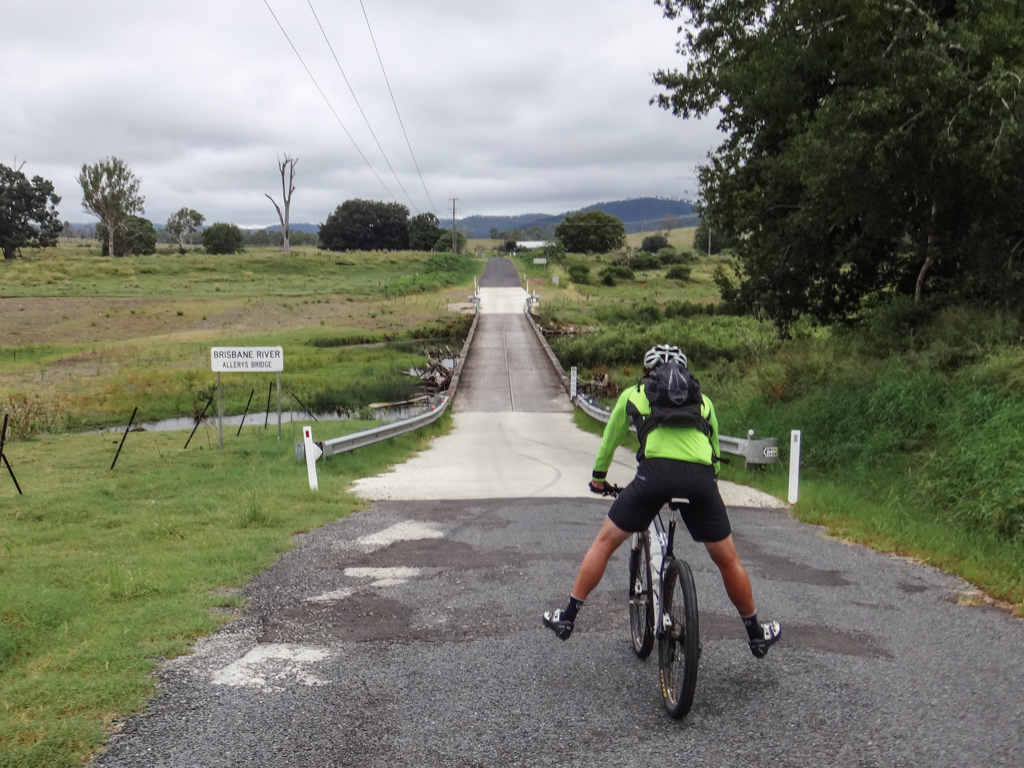 After a couple of minutes on the D’Aguilar Highway we turned down Arababy Creek Road and crossed the Brisbane River. 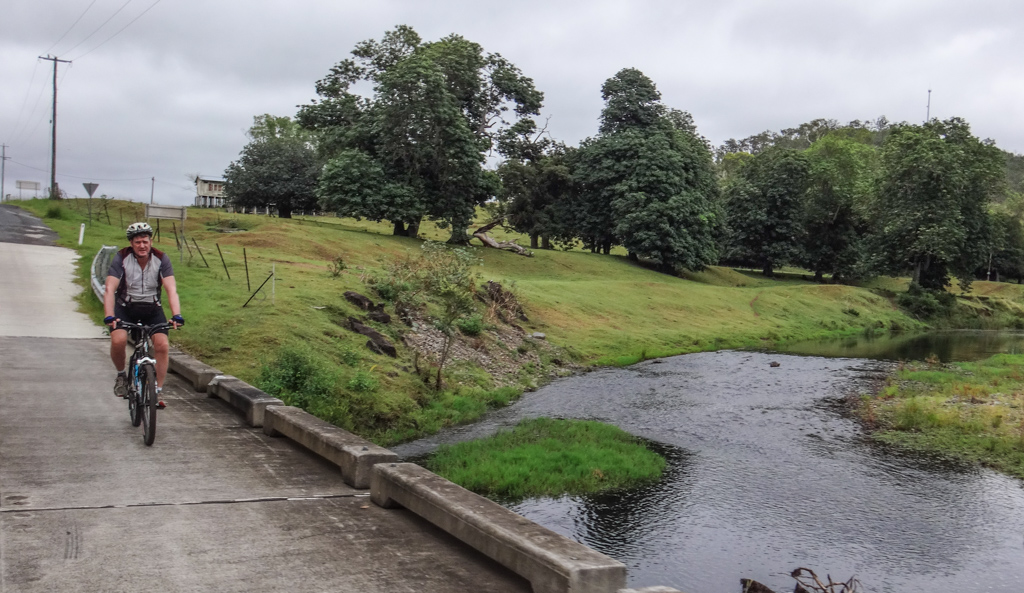 The River doesn’t look very imposing this far upstream at Allerys Bridge, but it is still quite scenic, especially since the fields are so green from recent rain.

The local Dungidau Aboriginal people called the river “Mairwar” meaning “Platypus”. It marked the border between the Dungidau people and their neighbors, the Dungibara.

They have a legend that the ancestors of the platypus were little men called “dinderi”. They travelled along the entire length of the Brisbane River from Moreton Bay, killing “dagein” or sea-snakes as they went.

At a lagoon on the river just north of this spot the snakes overpowered the little men and turned them into the first platypus or “mairwah”. 1

We rolled eastwards into the hills.

Interesting looking dirt tracks branched off to the right and left. I made a mental note that we should come back here soon and explore them. 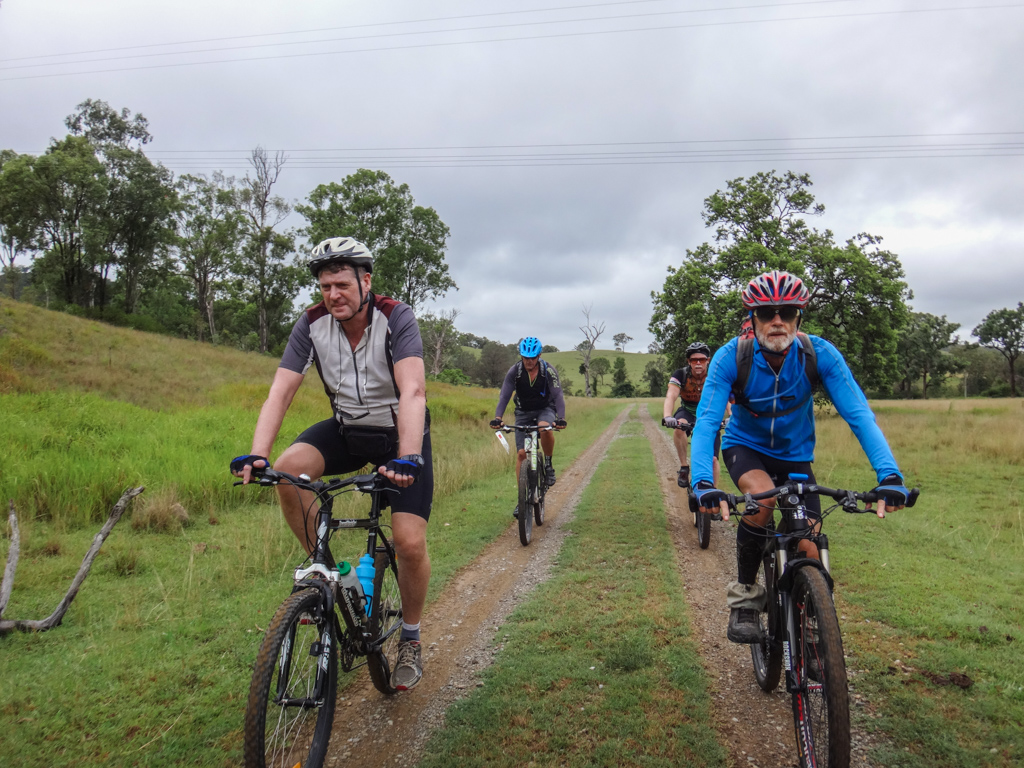 I’ve often looked at maps of the hills between Moore and Kilcoy and thought about having a look at that part of the world.

Today we decided to leave our pre-planned course for a while and check out one dirt track that headed promisingly up into those hills. 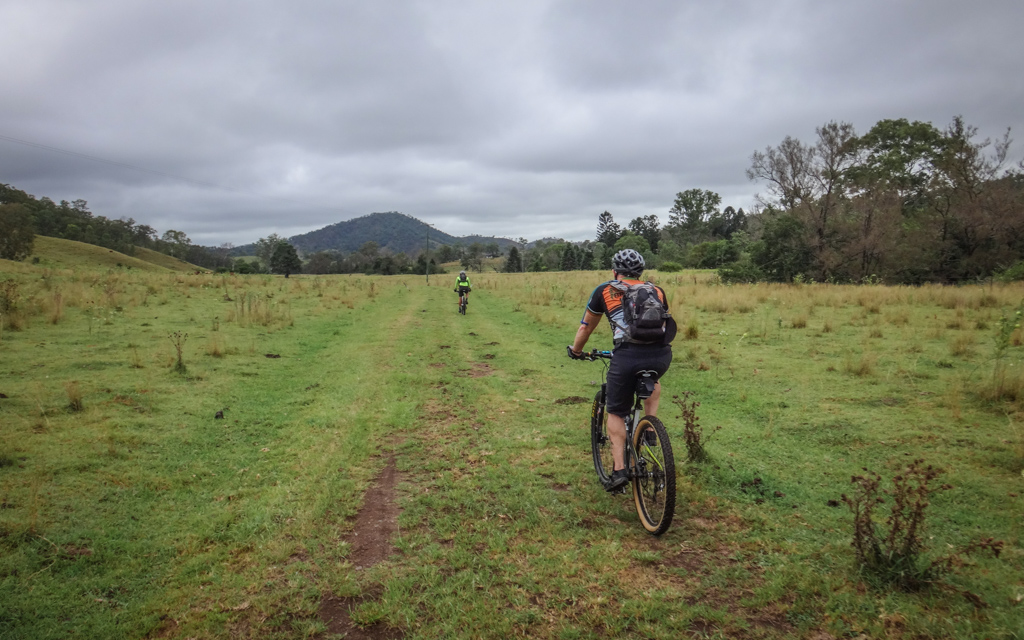 It eventually stopped at someone’s front door, so we turned around and got back to our original course. Regardless of where it ended up, it was still a pleasant detour. 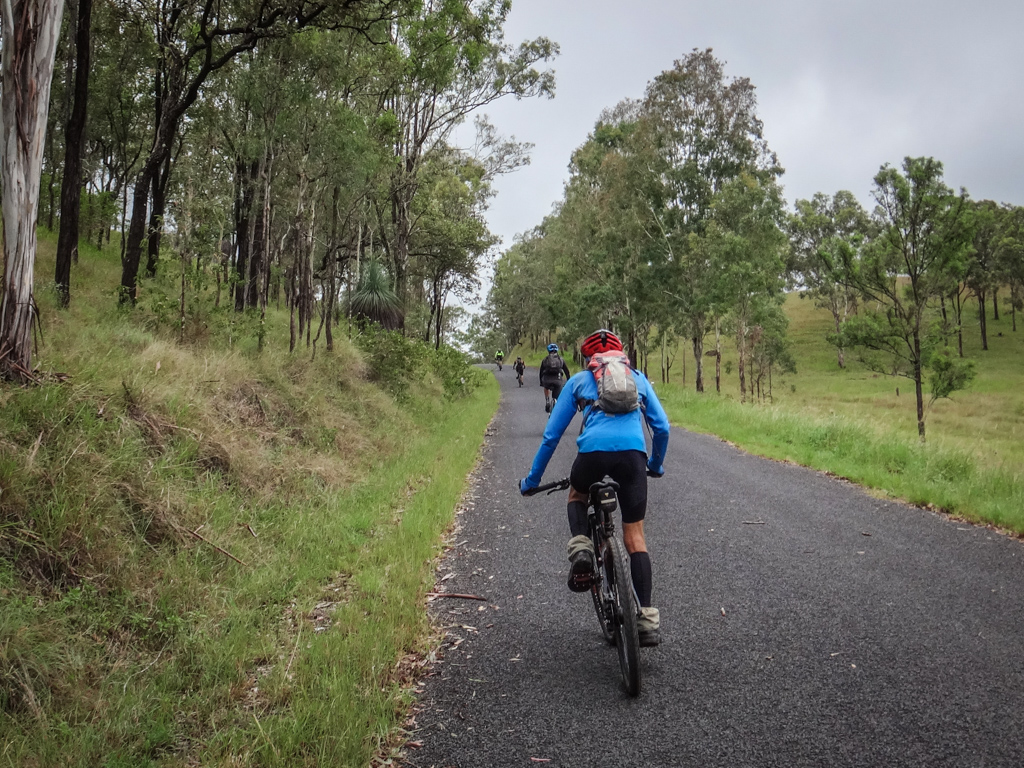 There are numerous “gaps” in the hills around here: Dryden Gap, Grasstree Gap, Christie Gap, even Boomerang Gap.

I pointed them out as we passed them. 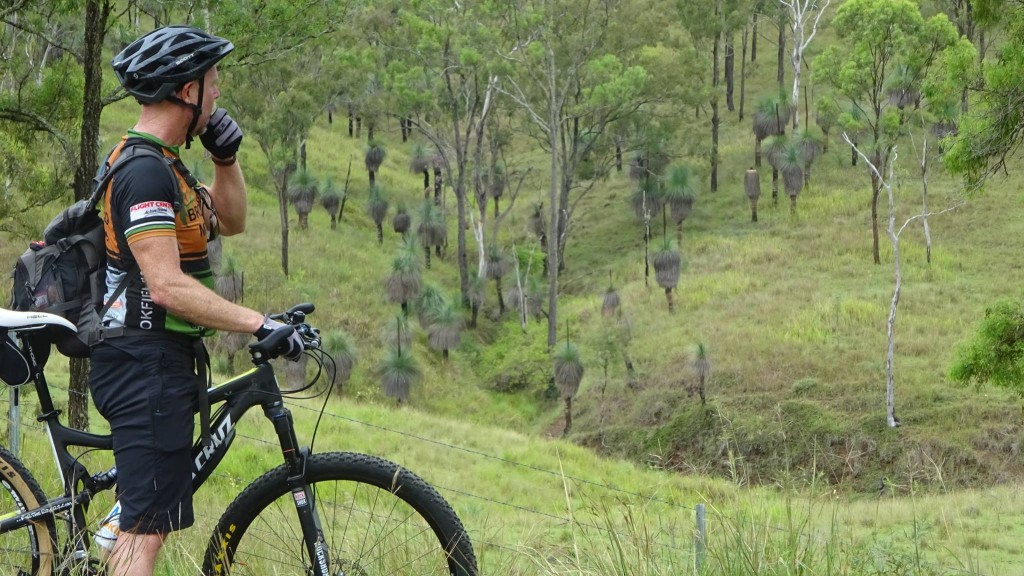 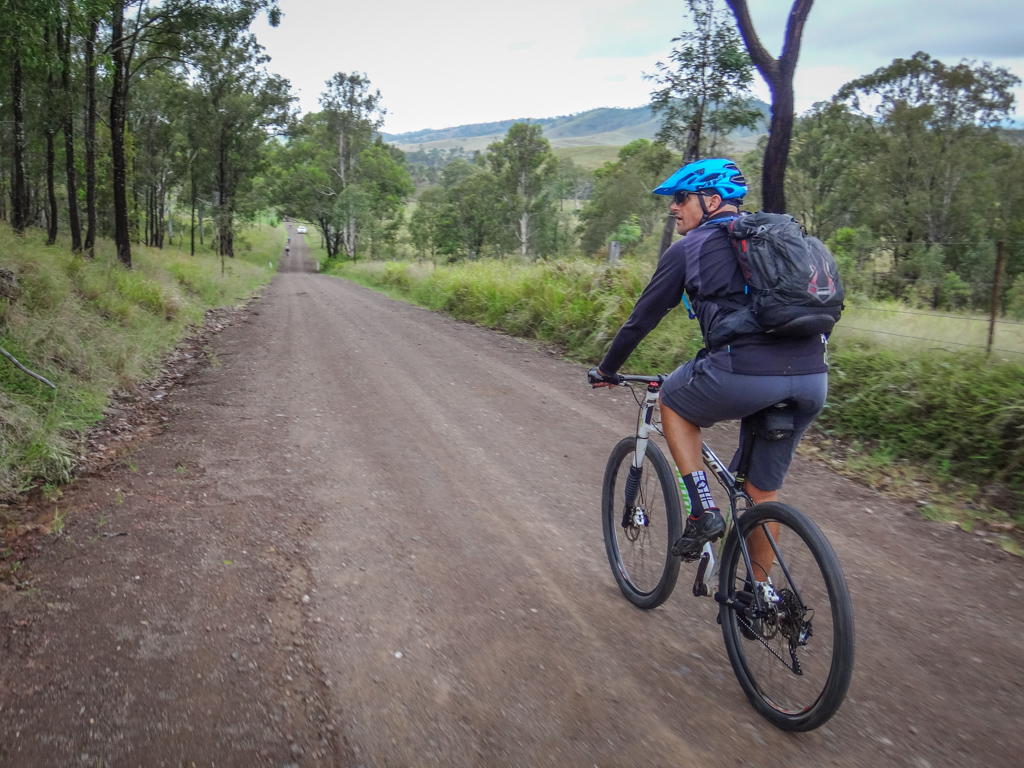 On the other side of the “gap” in the hills we enjoyed an easy descent along Kangaroo Creek Road.

With gentle hills and cool clouds this was a perfect day for riding. 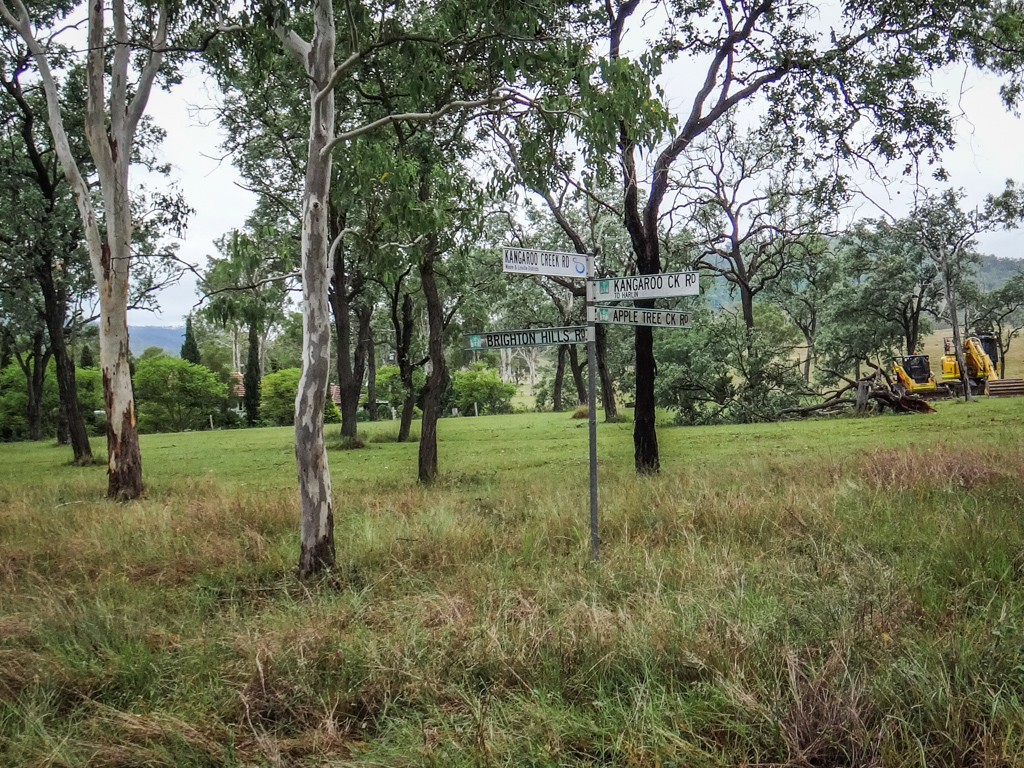 There is a fascinating network of dirt roads around here. At this one point I noticed five roads and two creeks all intersecting in the space of about a hundred metres. We should probably return here soon, I think. 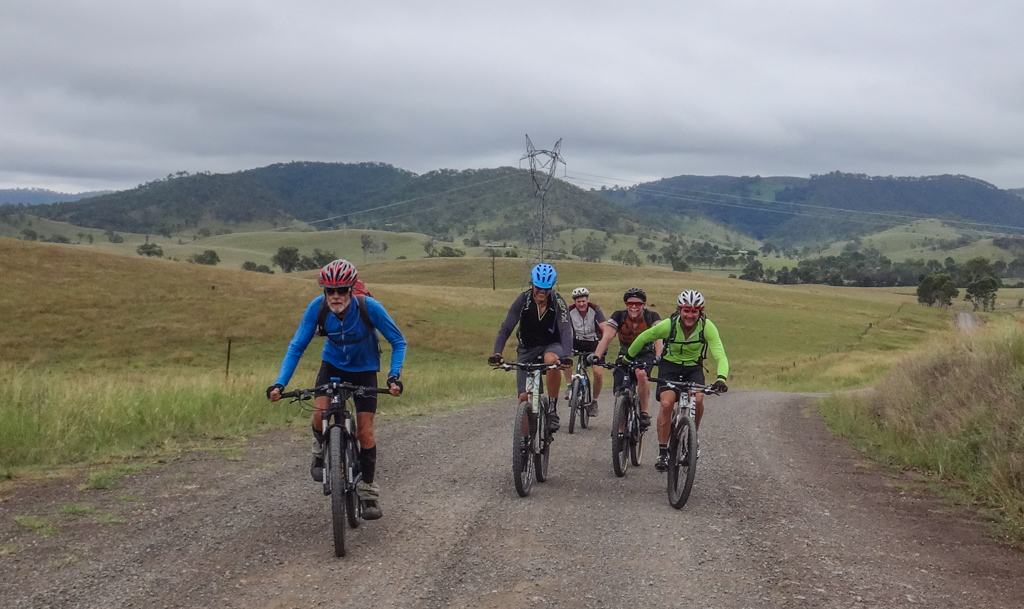 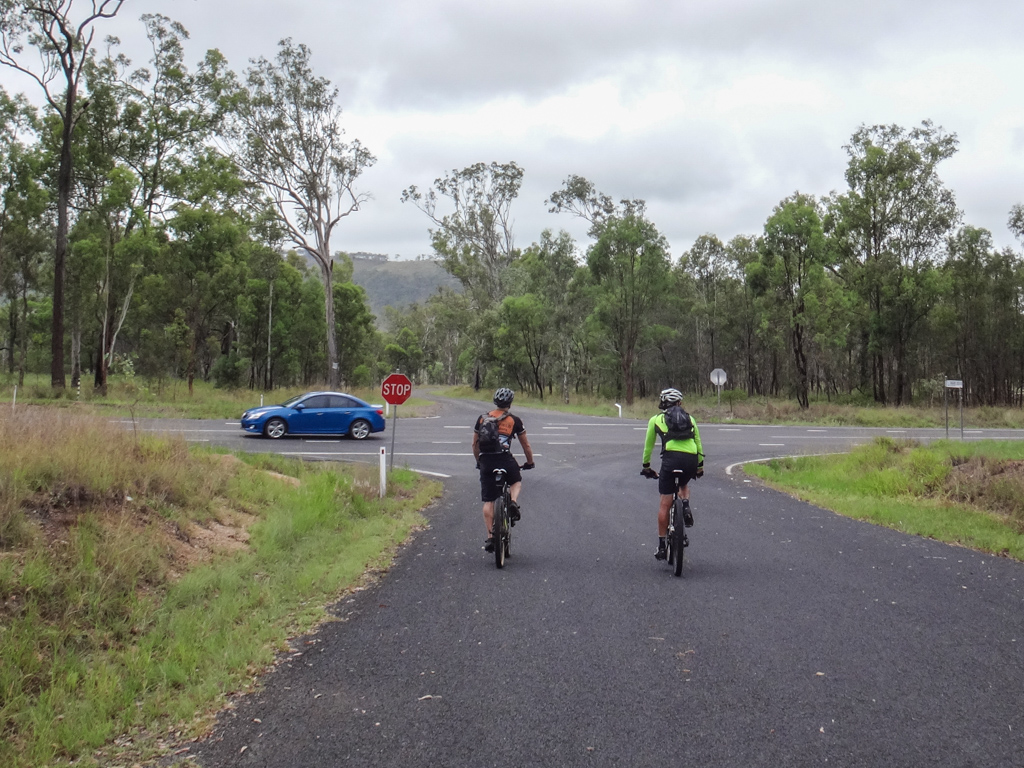 Eventually we met up with the D’Aguilar Highway again, but this time we just crossed it and continued south along Holland Road.

There used to be a bridge here a long time ago, but it got washed away in a flood.

I spoke to Neil on the phone during the prior week and he kindly allowed us to ride through one of his paddocks so we could wade across the river and get into Harlin. 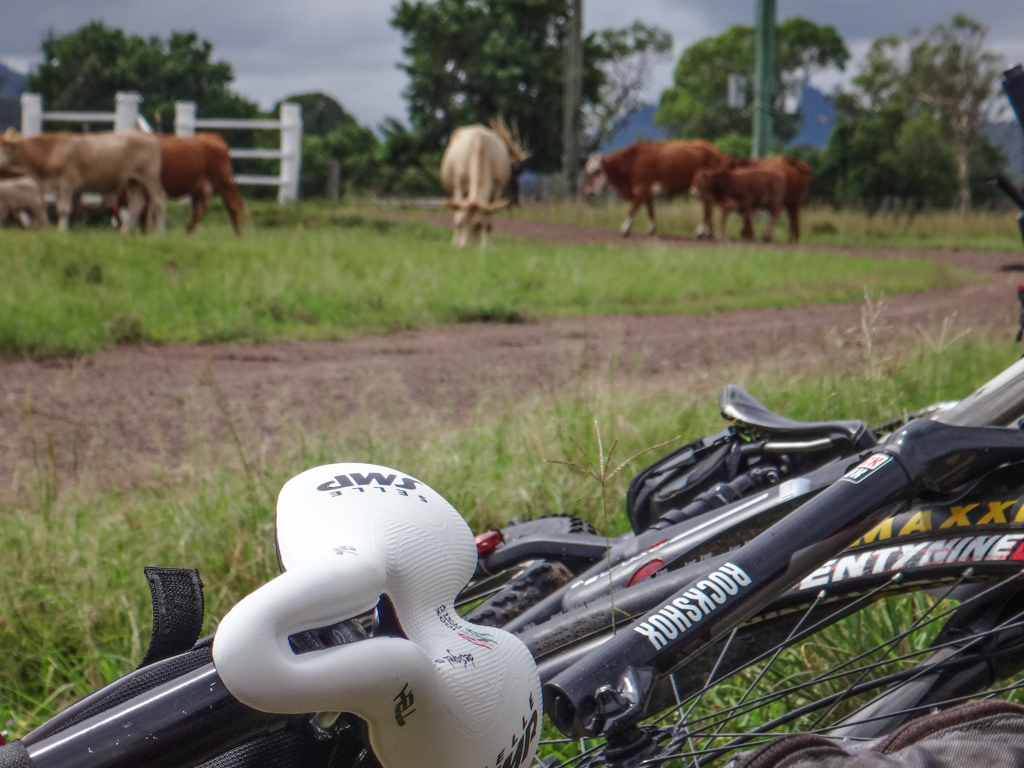 But first he had to get his cattle out of the paddock. So we took a quick break and sat in the grass while Neil did all the hard work. 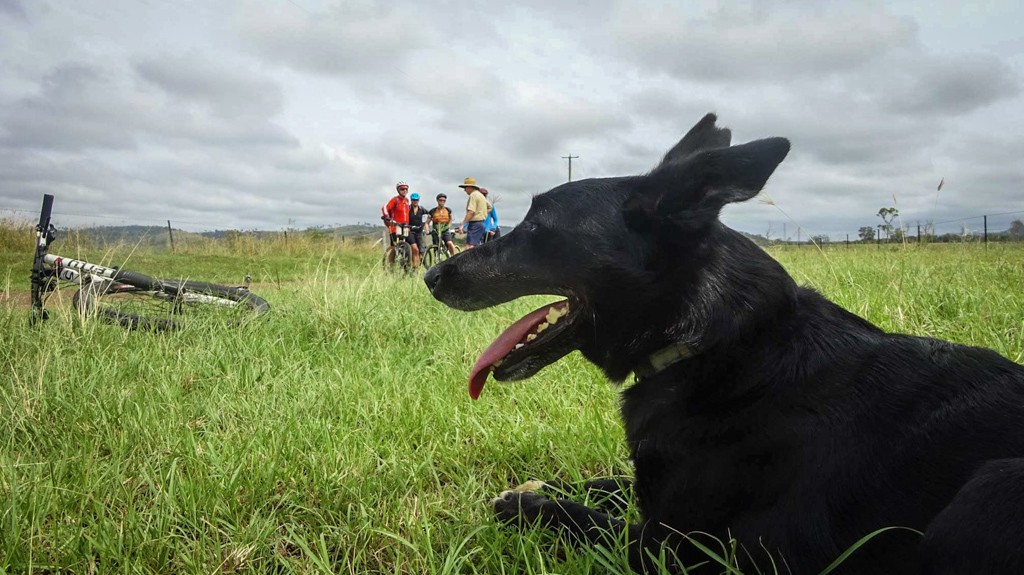 A happy looking cattle dog waited patiently nearby. A couple of times he brought a stick for me to throw while I chatted with Neil.

Chasing cows all day with the boss – he looked like he was living the canine dream. 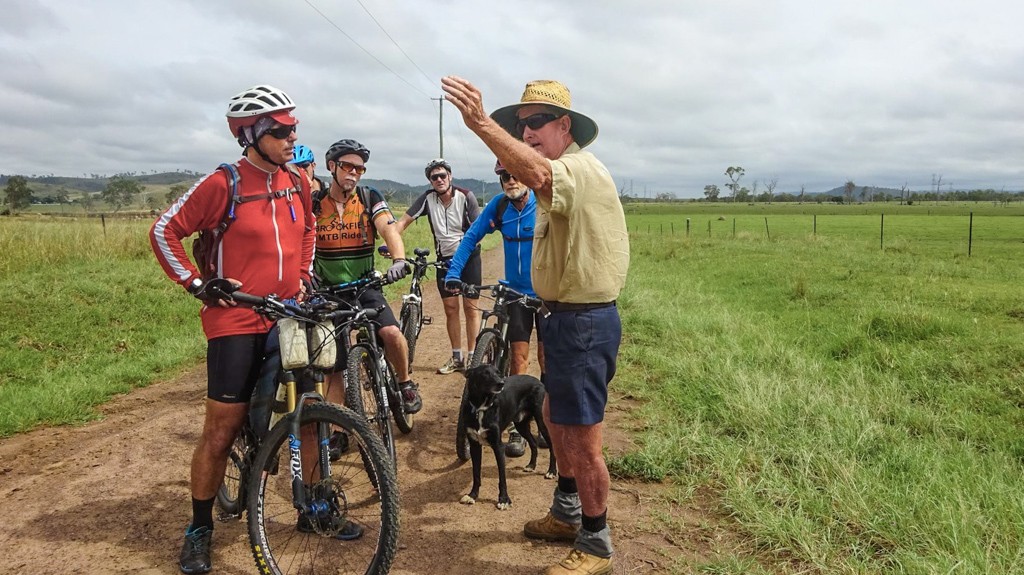 Neil gave us a couple of suggestions about how to get across. In the end we decided to take the route which would least annoy his neighbours, which meant we’d eventually have to scramble up a fairly steep bank on the other side. 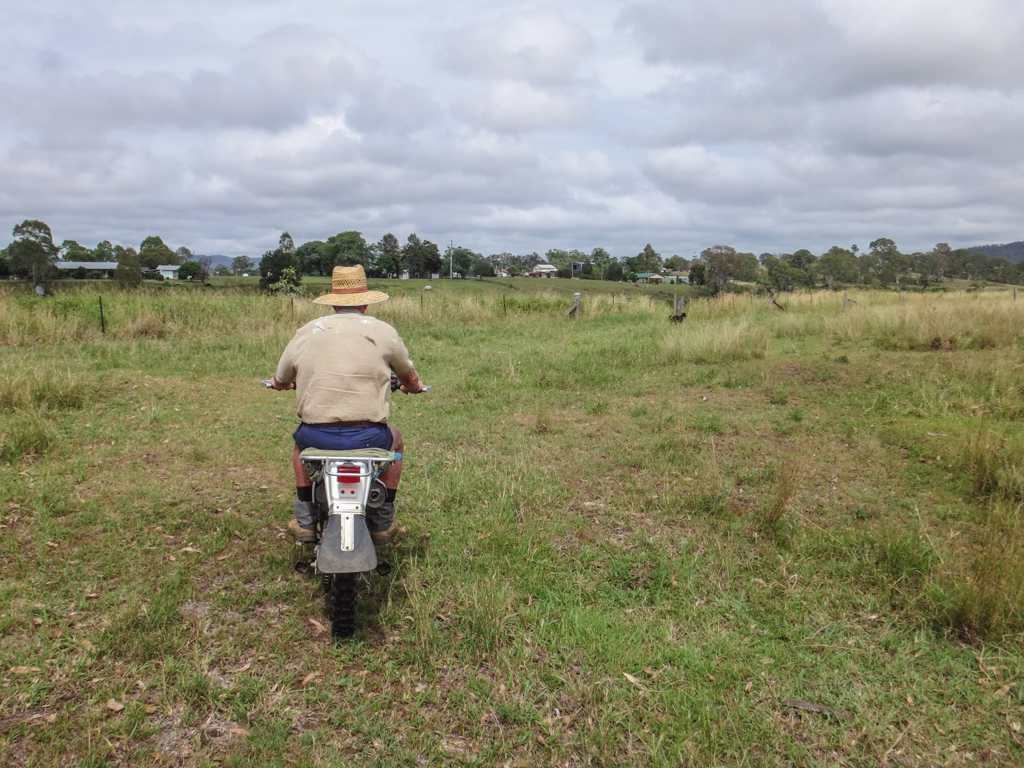 His family has been in this area for several generations. He has cared for this farm all his life, but he has often battled river bank erosion from floodwater. He has campaigned tirelessly for greater protection of the banks along this part of the river.

Despite those challenges he’s still a warm welcoming man and his farm looks great. I think his land is in safe hands.

He led us through the grass on his motorbike. 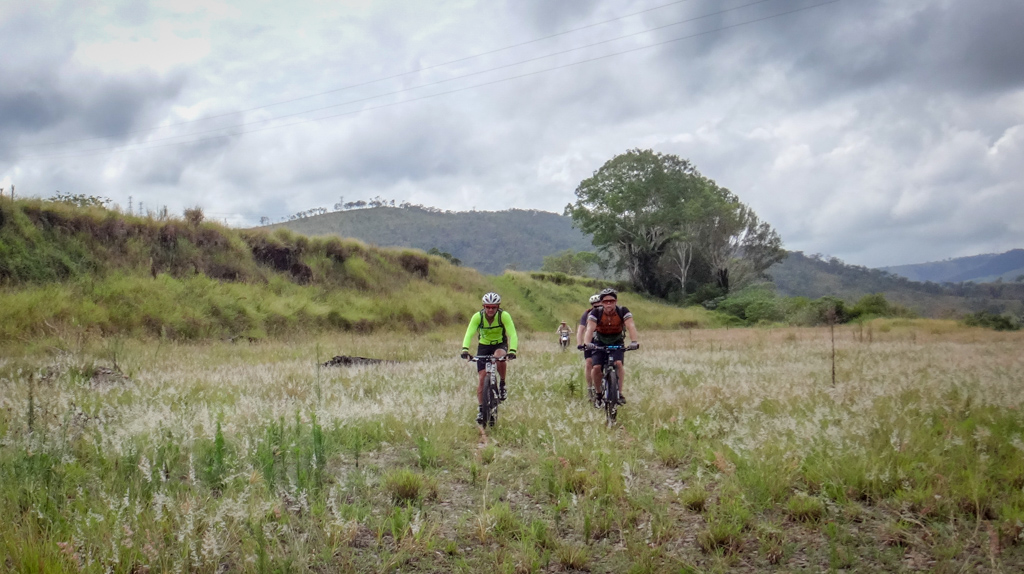 The river bed here is over two hundred metres wide. It must seem fearsome in times of flood.

At the moment, there’s not much water flowing in it, so the river bed looks like a long winding paddock of tall grass. 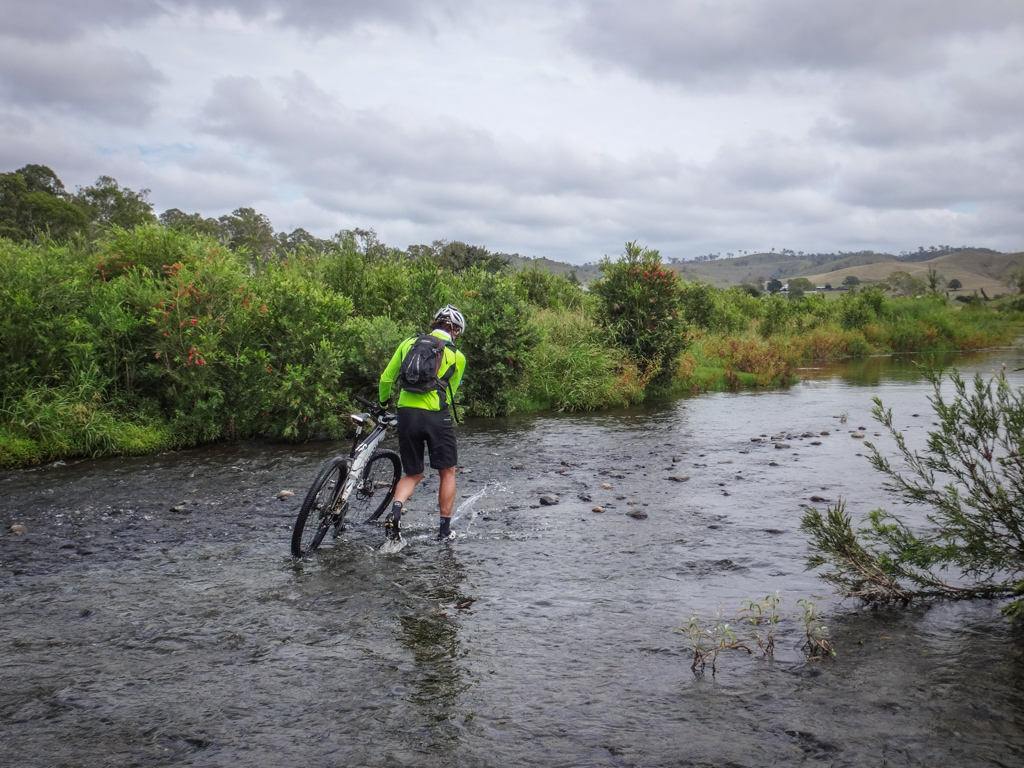 Eventually we reached the water and waded through.

It was only ankle-deep.

It seems strange that there is a bustling city of a million people downstream. Hundreds of thousands people probably cross it or drive by its muddy water daily. And yet few of them have seen the upper reaches of the crystal clear Brisbane River like this… 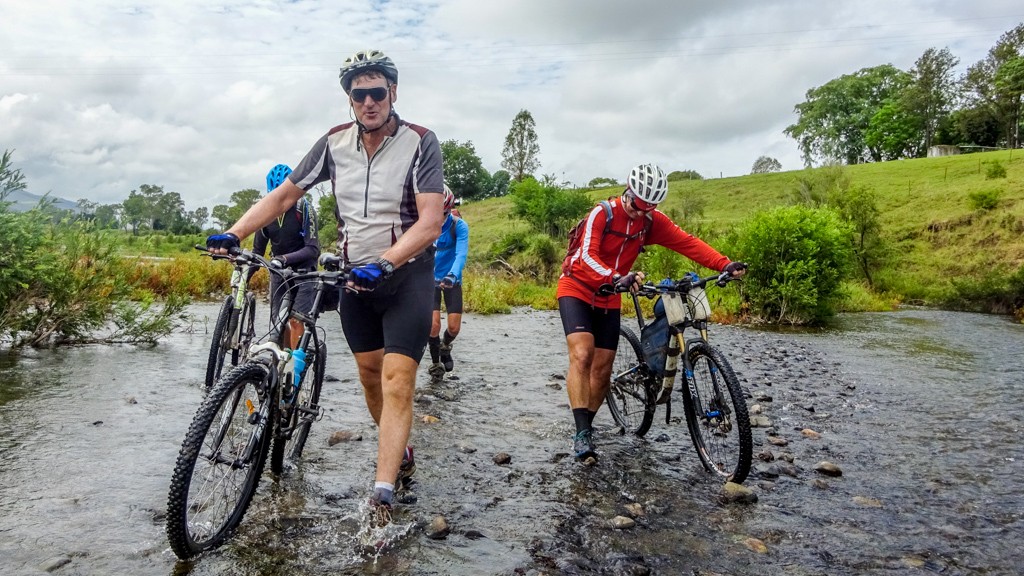 It was beautiful. I was glad to get wet feet. 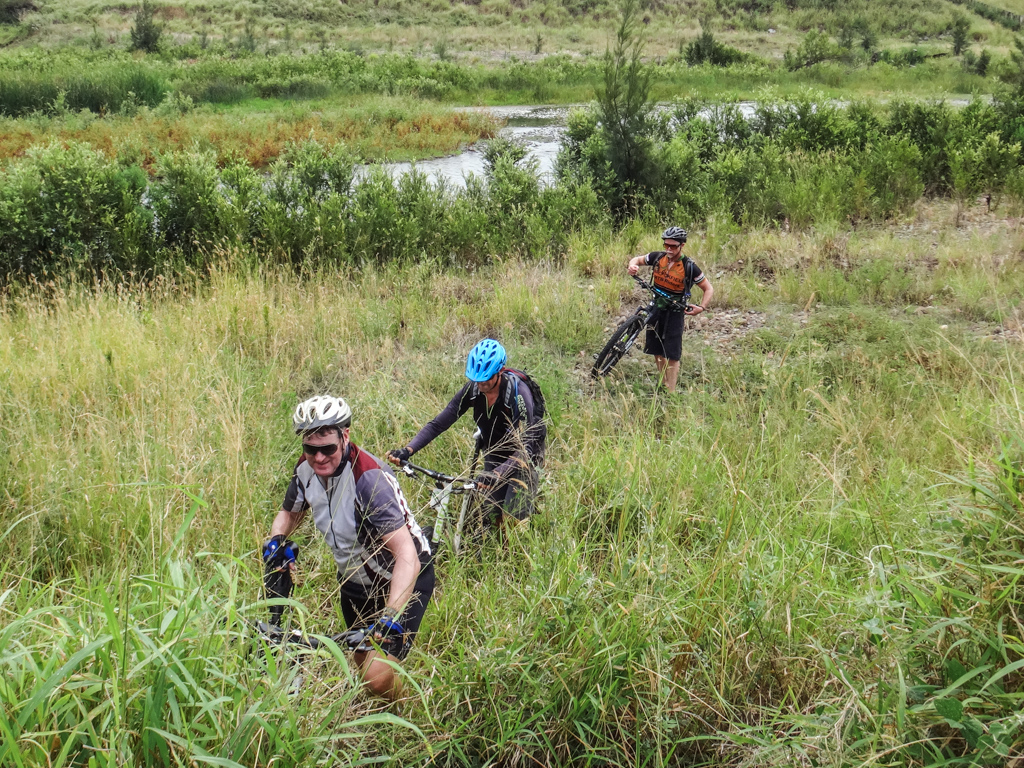 On the other side, we bashed through high grass. Neil had warned us about brown snakes, so we kept a close watch on the ground for any unfriendly reptiles. 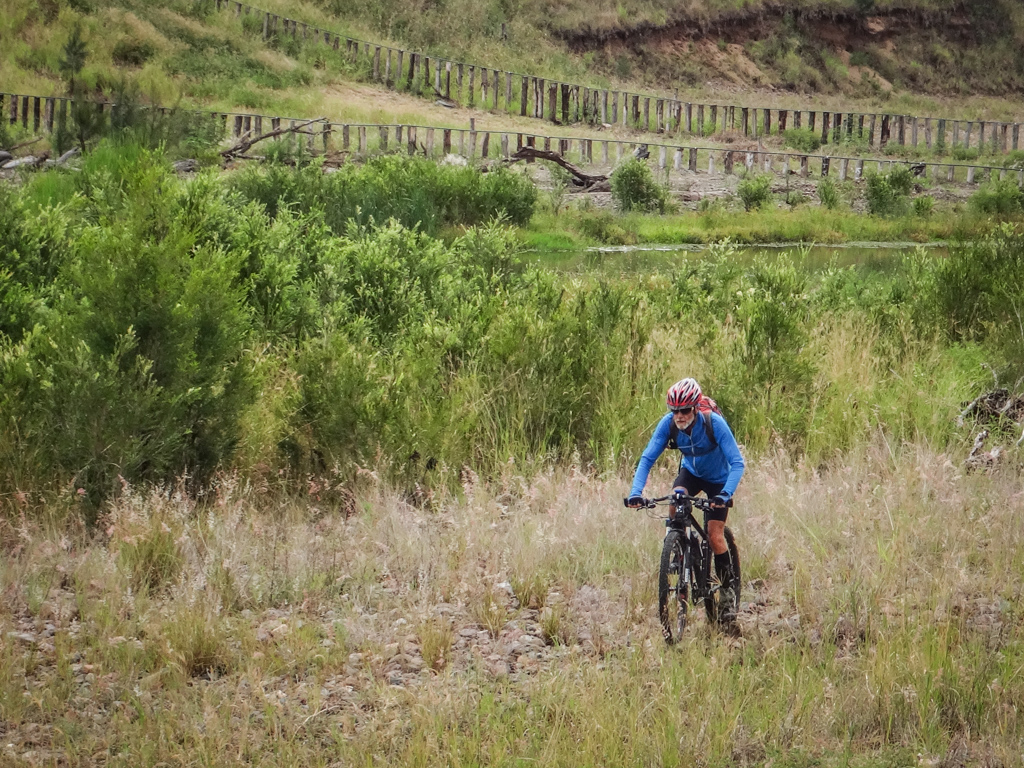 We dodged head-sized river rocks and were able to ride for some of the way along the river bed. 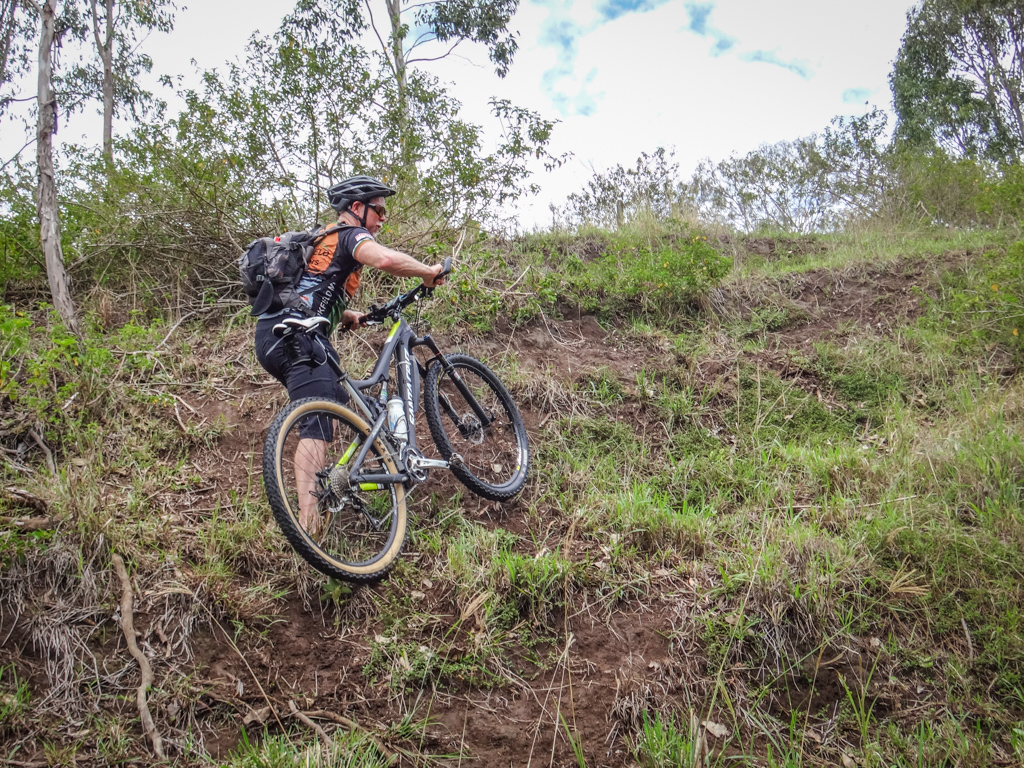 Eventually we had to scramble up the other side.

The banks were about ten metres high, and muddy from overnight rain, but we still managed to reach the top without any major issues.

The rail trail runs very close to the river here.

As soon as we make it to the top of the river bank, we were almost on the old railway track.

This section still has switches, sleepers and plenty of railway lines. We bounced along for a few hundred metres.

We followed the remnants of the railway line along the river until it met the Brisbane Valley Highway. 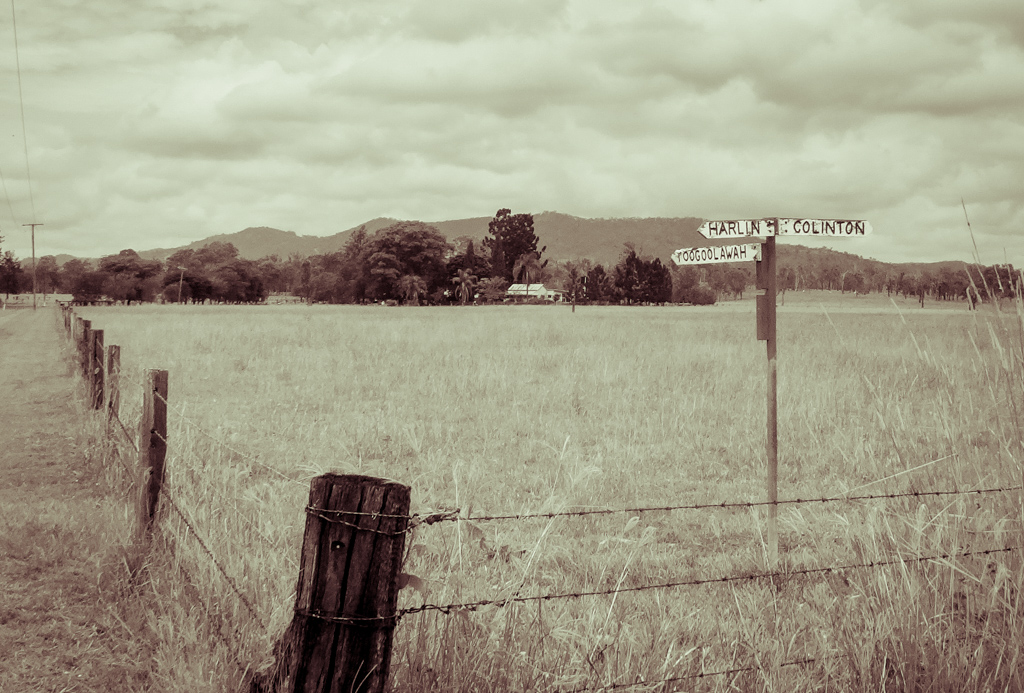 On the other side of the highway we rode west through Emu Creek past more rolling hills and lush farmland. 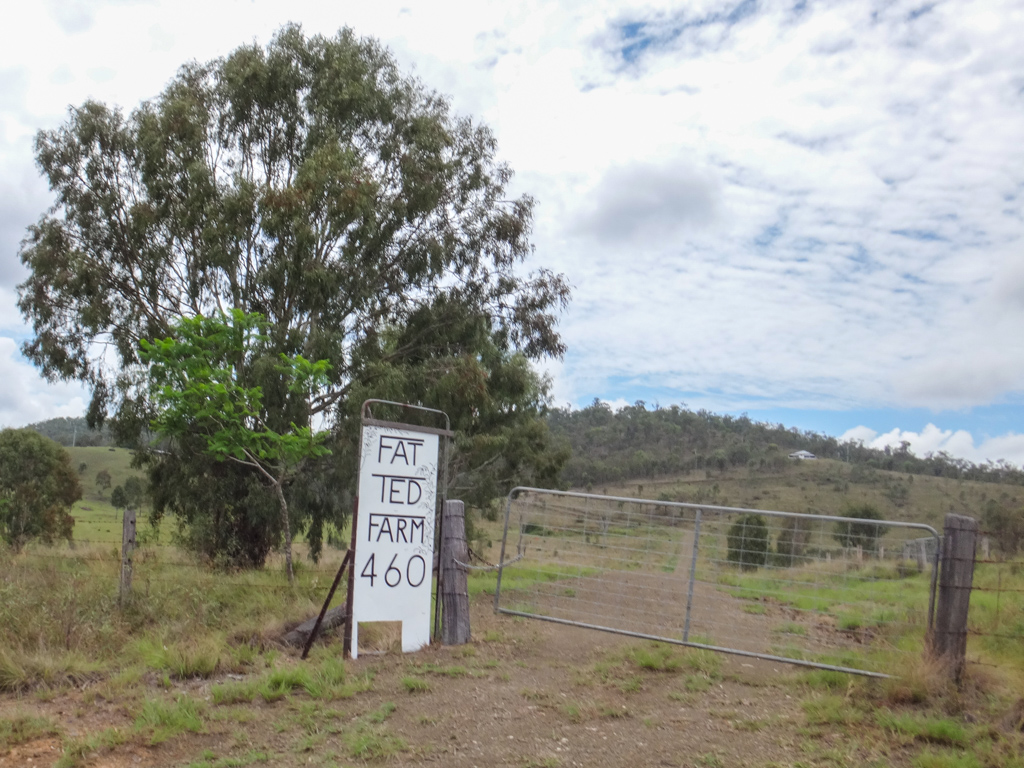 We even rode past “Fat Ted’s” place. I wonder if he is as fat as they say he is? 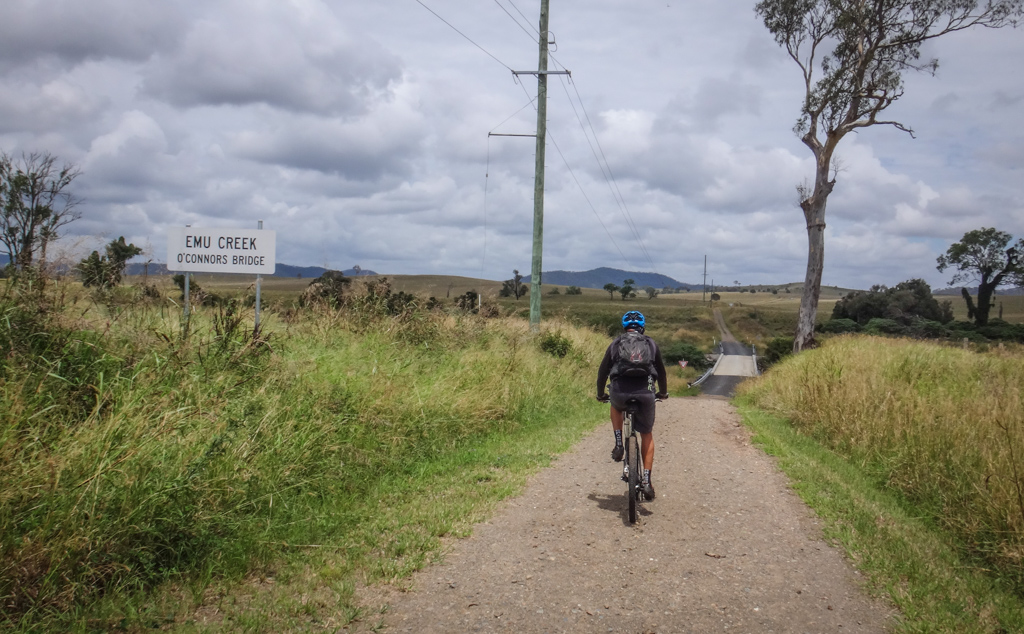 Eventually we crossed Emu Creek. This bridge is named after Neil O’Connor’s grandfather.

We had ridden through here a while ago on a trip between Colinton and Blackbutt. 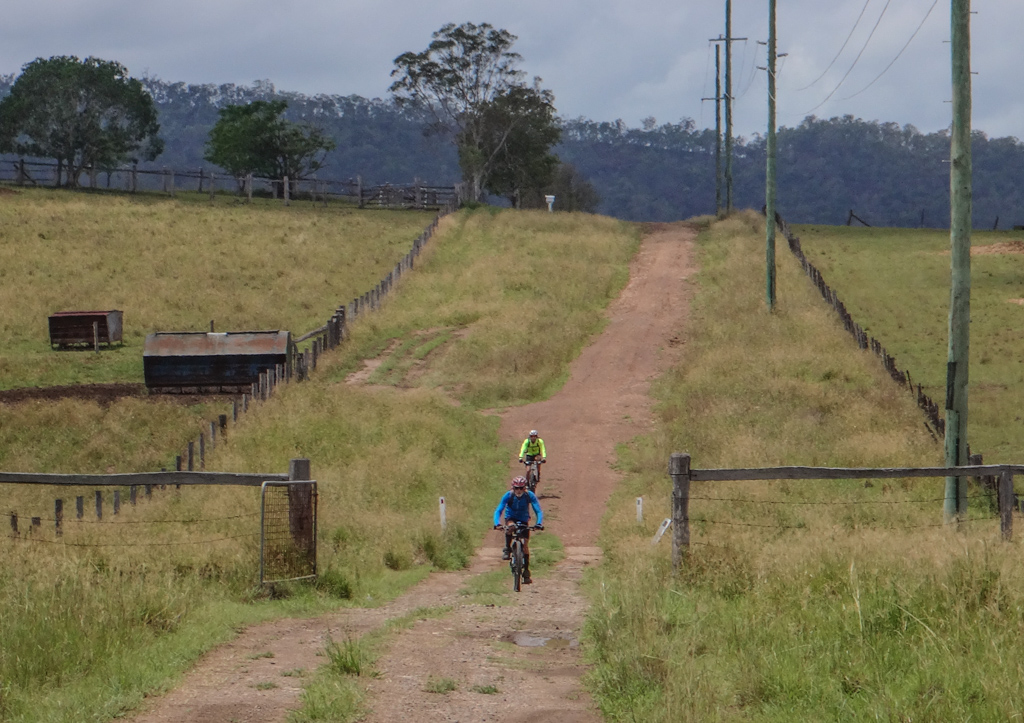 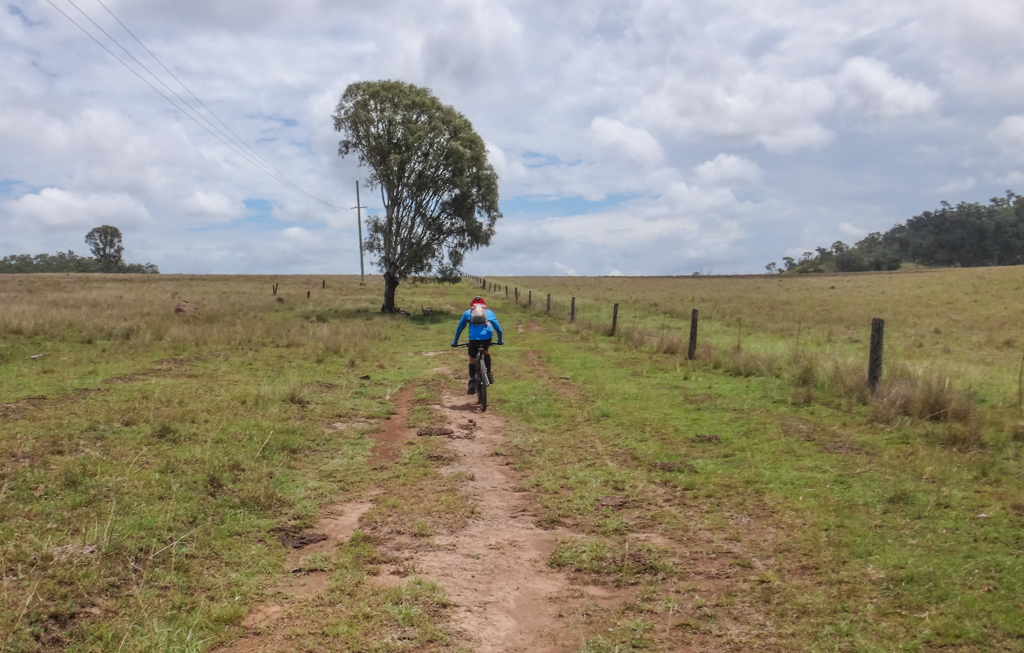 The road devolved into a farm track, and eventually just a few cattle tracks in the grass…

… and the grass got higher. 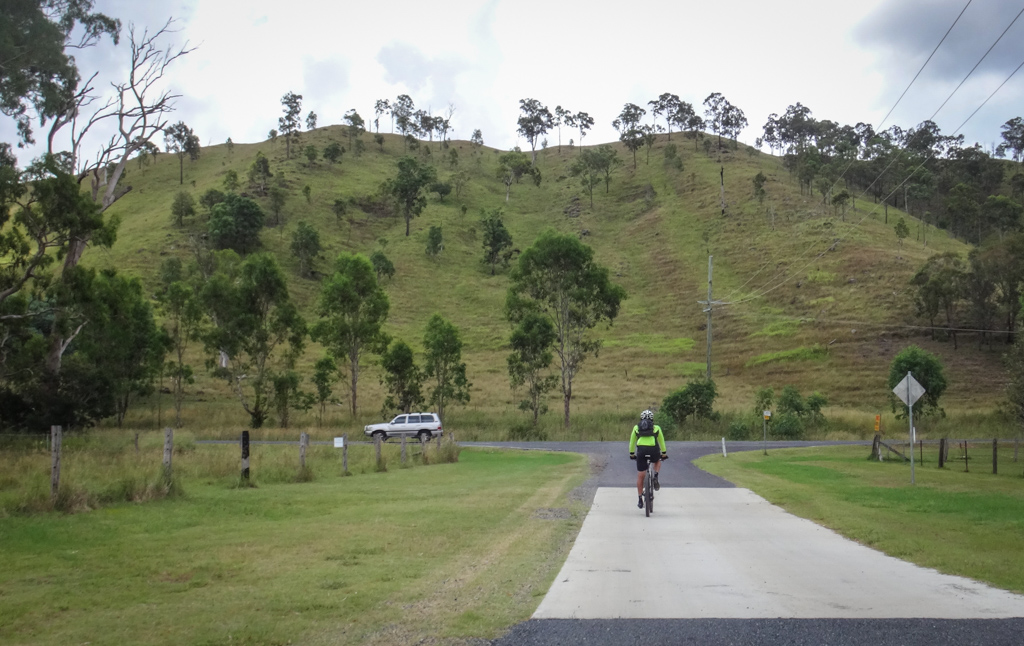 Eventually our track joined up once again with the D’Aguilar Highway at Moore.

We rode just under 50km in about four hours with about 480 metres of climbing.

With the pleasant cloud cover and easy gradients, this one rates about 5.5 out of 10 on the tough-o-meter. In hot sunny river it would probably rate 6.5. I don’t think we earned our beers today, but we still enjoyed one afterwards 🙂

Thanks Paul, Jason R, Jason G, Calum and John for a fun day out on the bike, 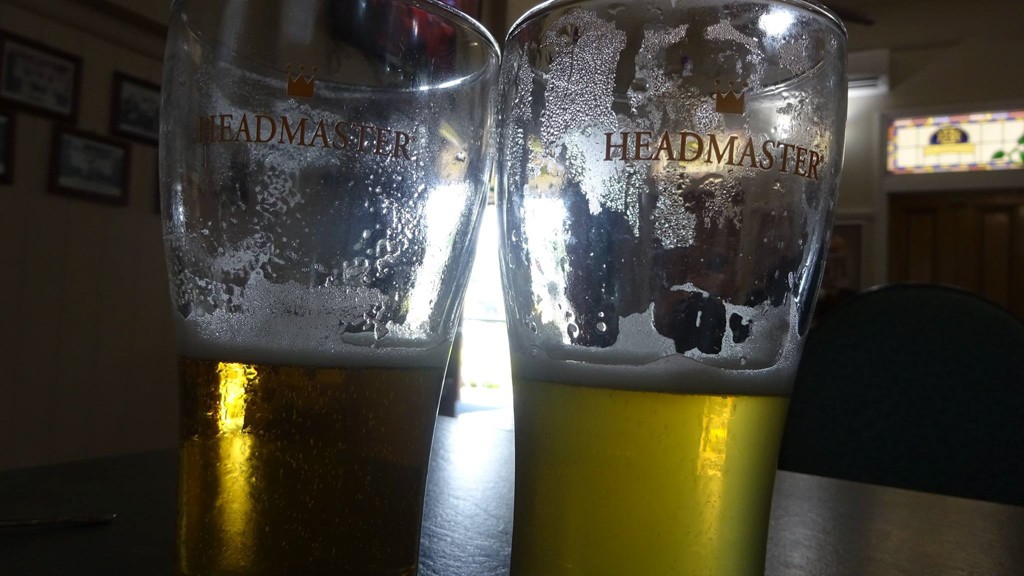