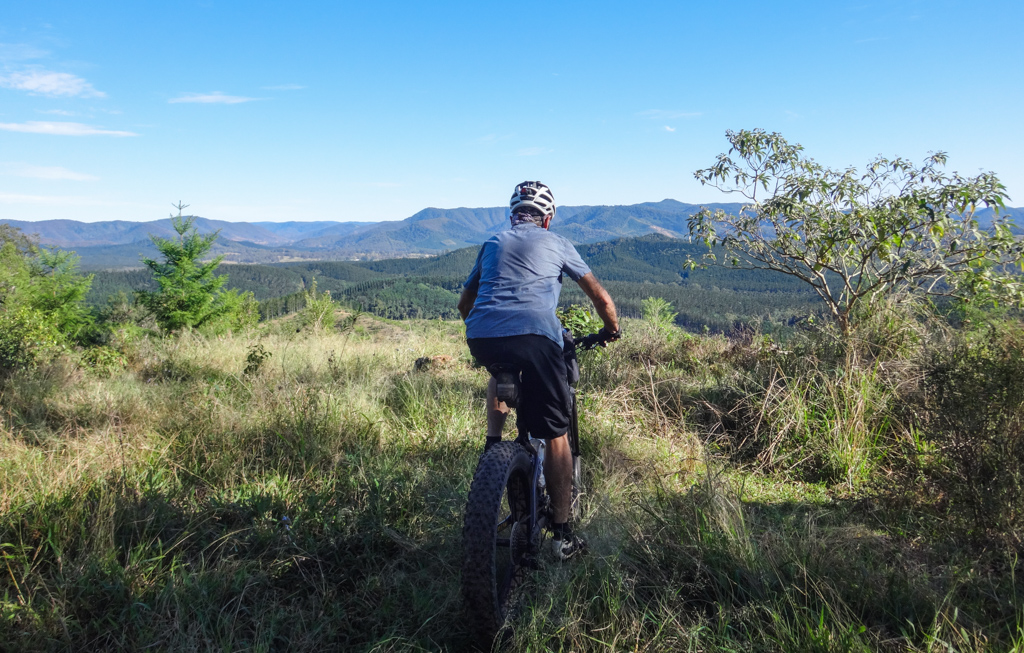 When my friend Mike recently offered to show us around some of his favourite trails in the mountains near Imbil, we jumped at the chance. 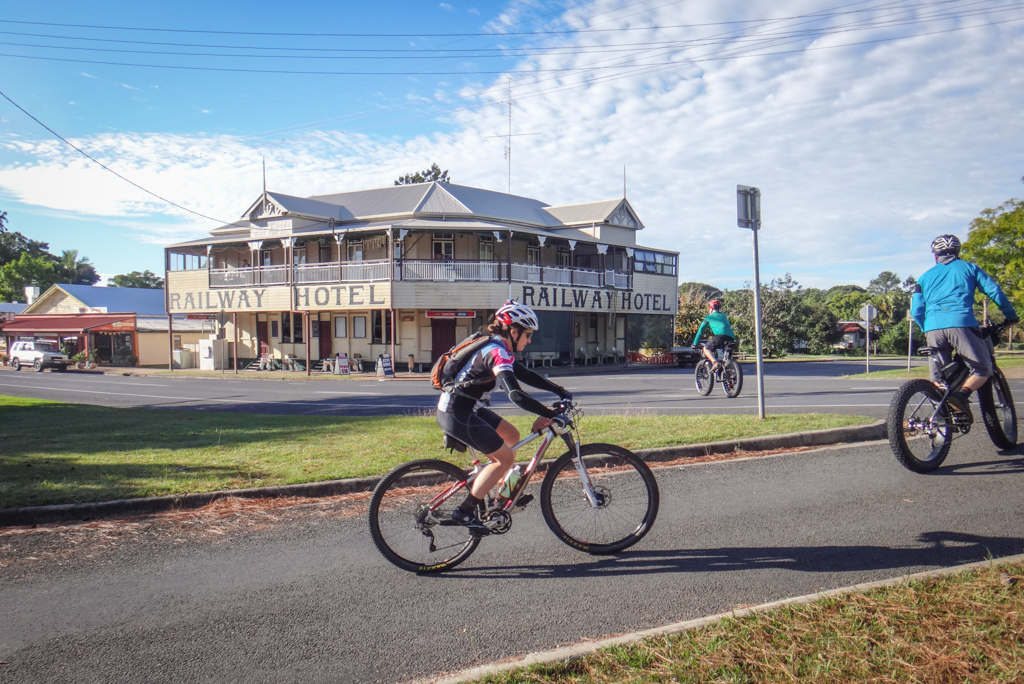 Imbil is a delightful small town on the Mary River west of Gympie.  It boasts a grand old pub, a century-old disused railway line, and endless trails through hilly hoop-pine plantation forests. 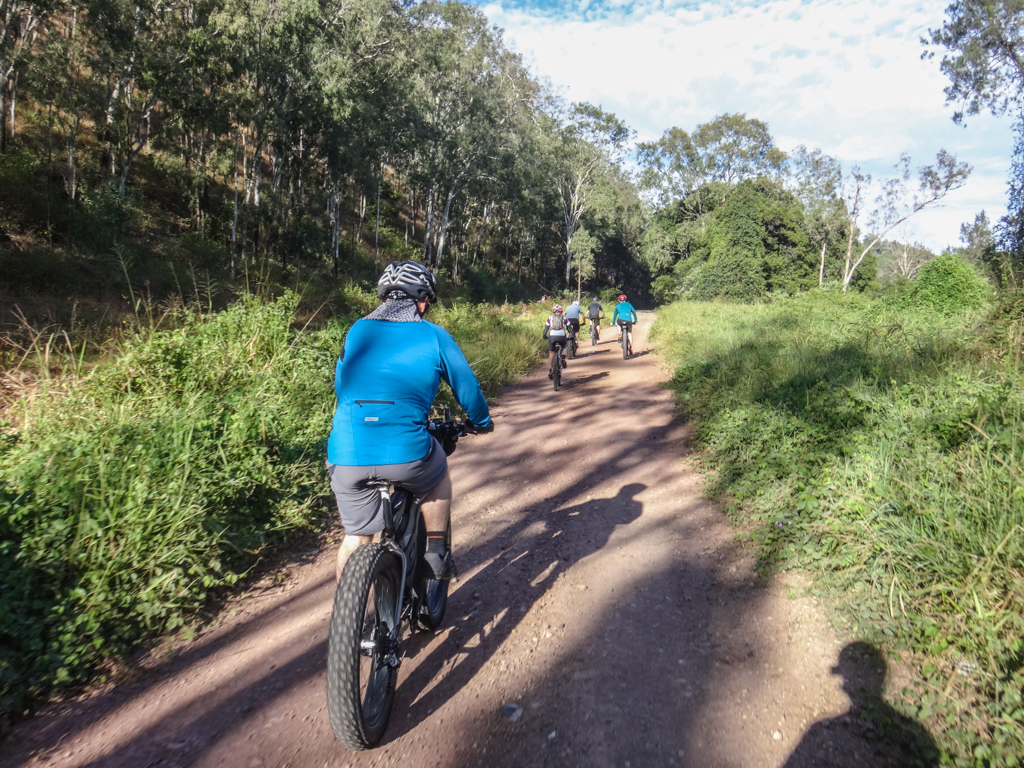 After a brief roll down the paved road, we followed a gravel track into the forest. 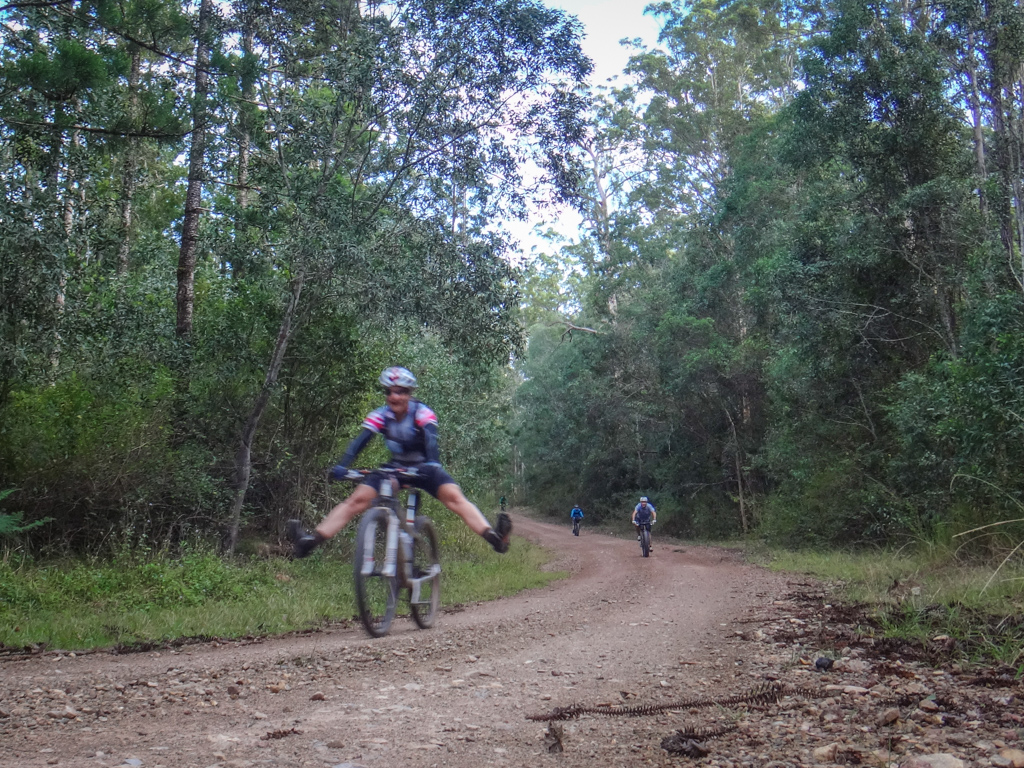 Mountain bikers love the dirt.  We all grinned and regressed a few decades as we relaxed among the trees. 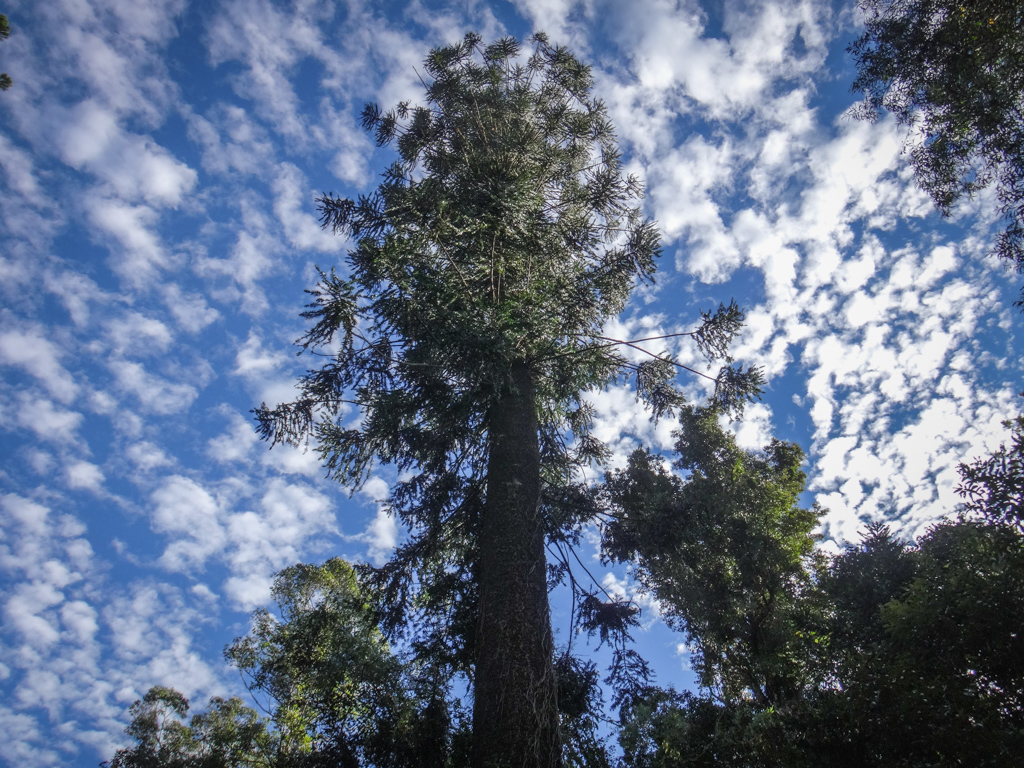 The plantations here are unusual. Rows and rows of Bunya Pines are planted beside the Hoop Pines. In Summer Bunyas drop huge cones the size of melons filled with edible nuts. They’re delicious when cooked, but you wouldn’t want one to fall on your head. 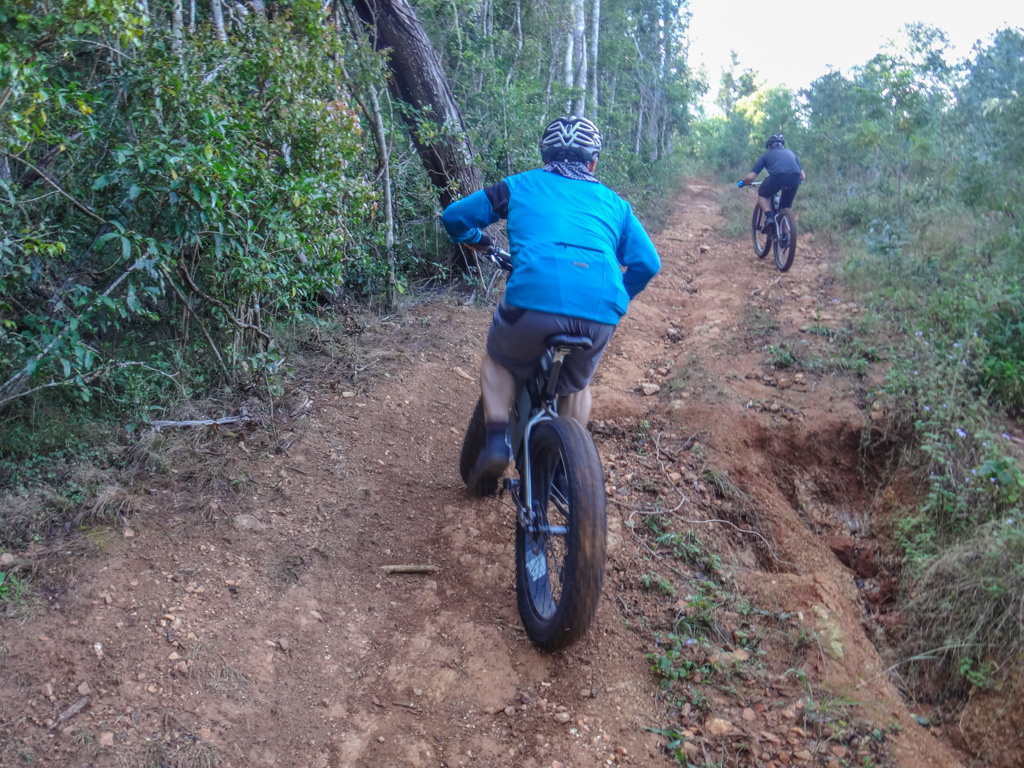 After a few easy kilometres on quiet gravel roads we finally reached the steep tracks. 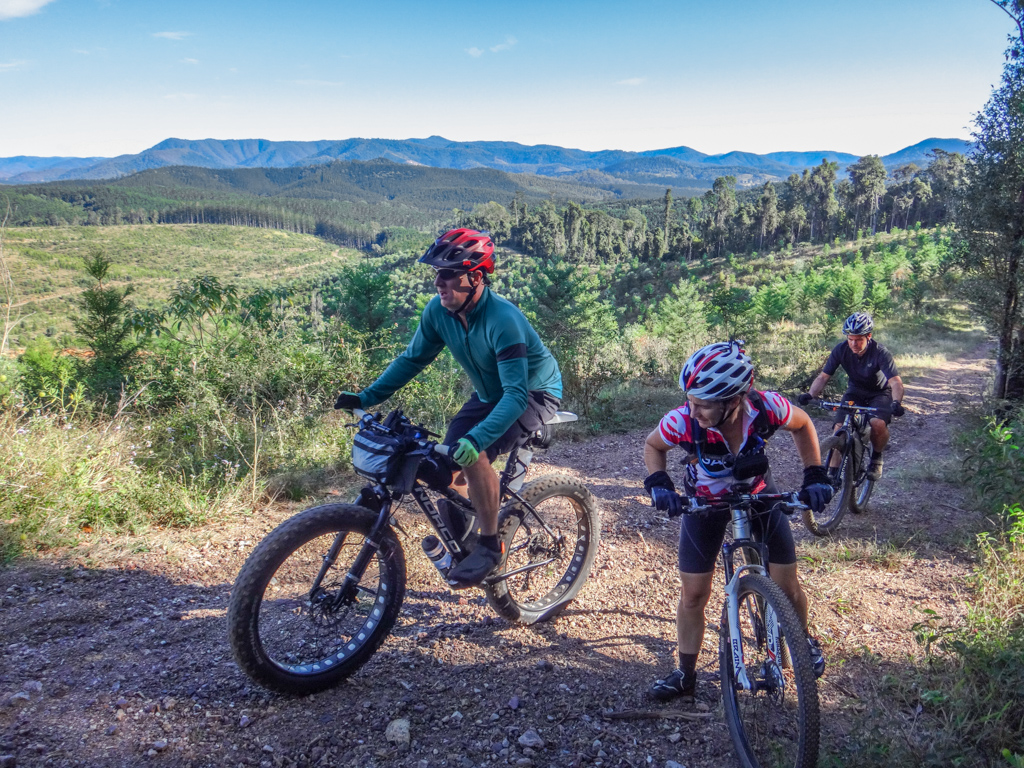 At first we pedaled heroically, but eventually the gradient became too steep… 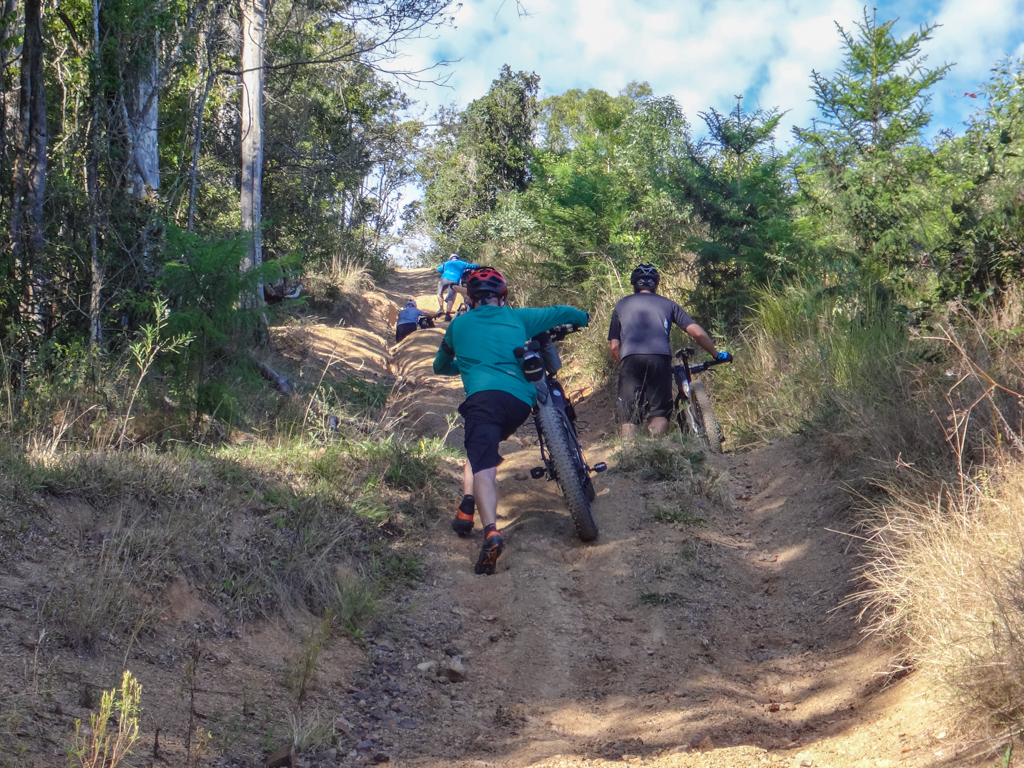 We dismounted and pushed.

These were big hills.  I found it difficult even pushing the bike up them.

As we ascended, rolling hills of pine plantations unfolded below us: a plush velour of dark green.

The tracks grew steeper.  We had to crawl up in places, dragging the bikes behind us.

We were working hard.  I chuckled under my breath and thought “This is definitely not boring.”

It might have been exhausting, but it was better than watching TV or reading the morning paper. 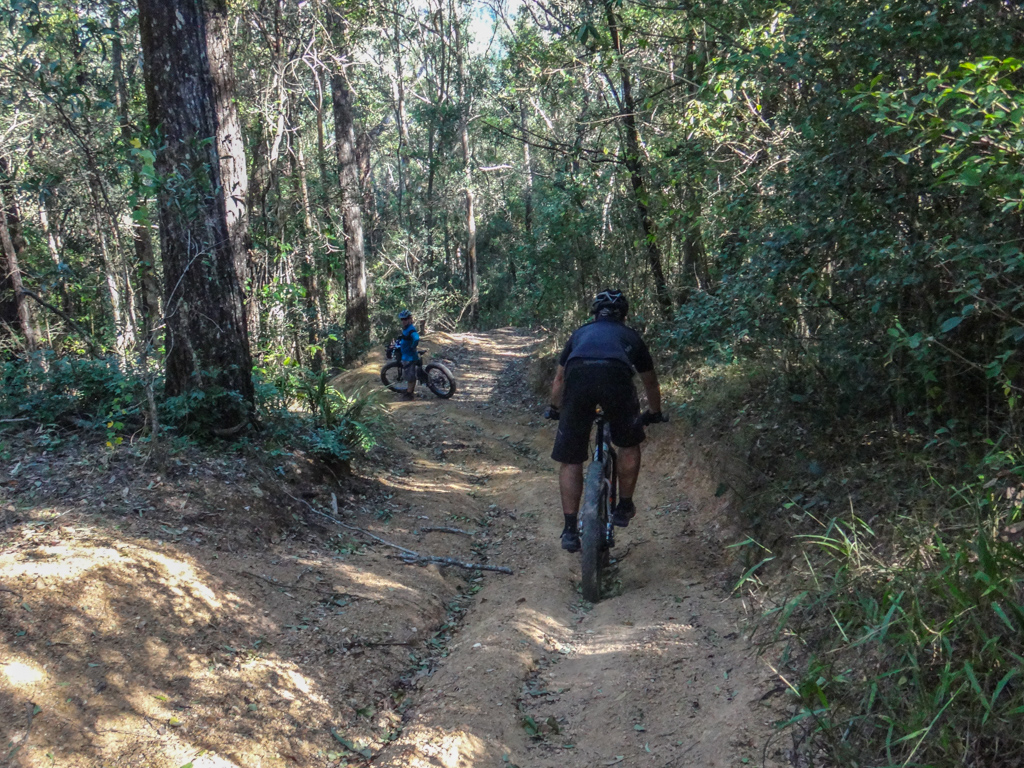 The pay-off for any tough climb is the enjoyable descent on the other side.

We reached the top, but the treacherous descent was steep and loose.  Our bikes skidded and fish-tailed downwards. 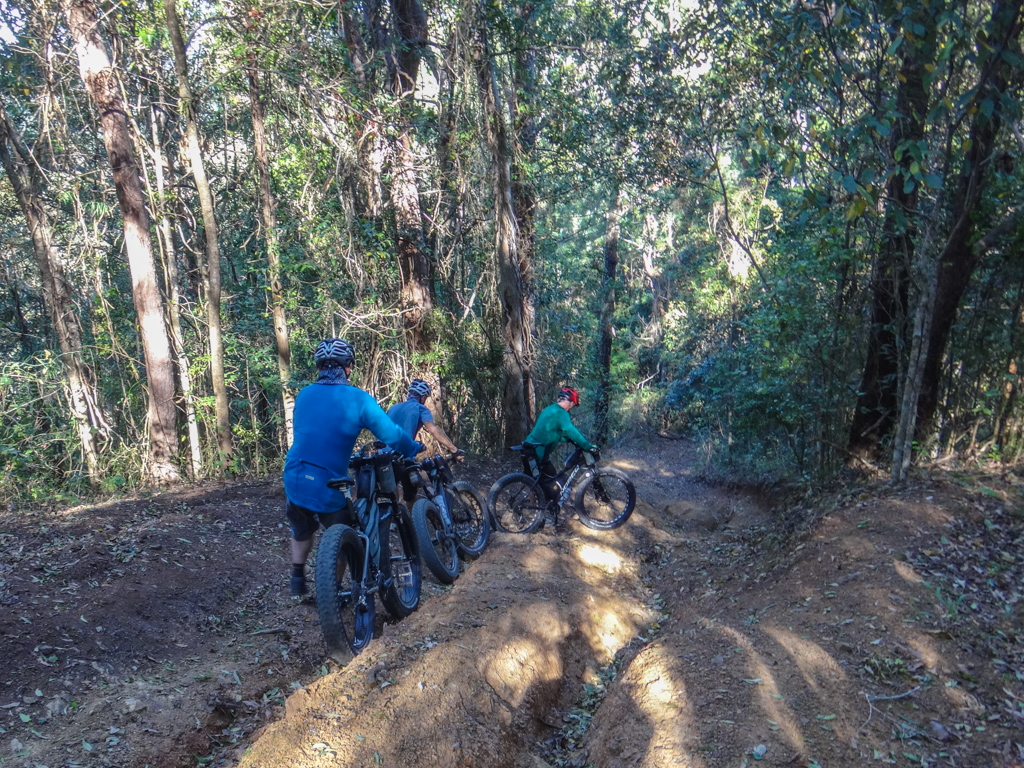 “Nope.  Not riding down that.”

Nick and I have both had multiple operations for mountain bike injuries.  We decided we didn’t want to add to the list today, so we got off the bikes and scrambled down the hill.

In some places even scrambling was tricky – especially while trying to drag our bikes down with us.

I slid down on my backside.

Mike (who has the affectionate nickname of “Mad Mike”) rode down a lot of these descents.

He survived, then apologetically confessed that he had probably brought us on the wrong course.  This was not where he had intended to take us.

Sometimes we have the best fun by accident when things don’t go exactly as planned. 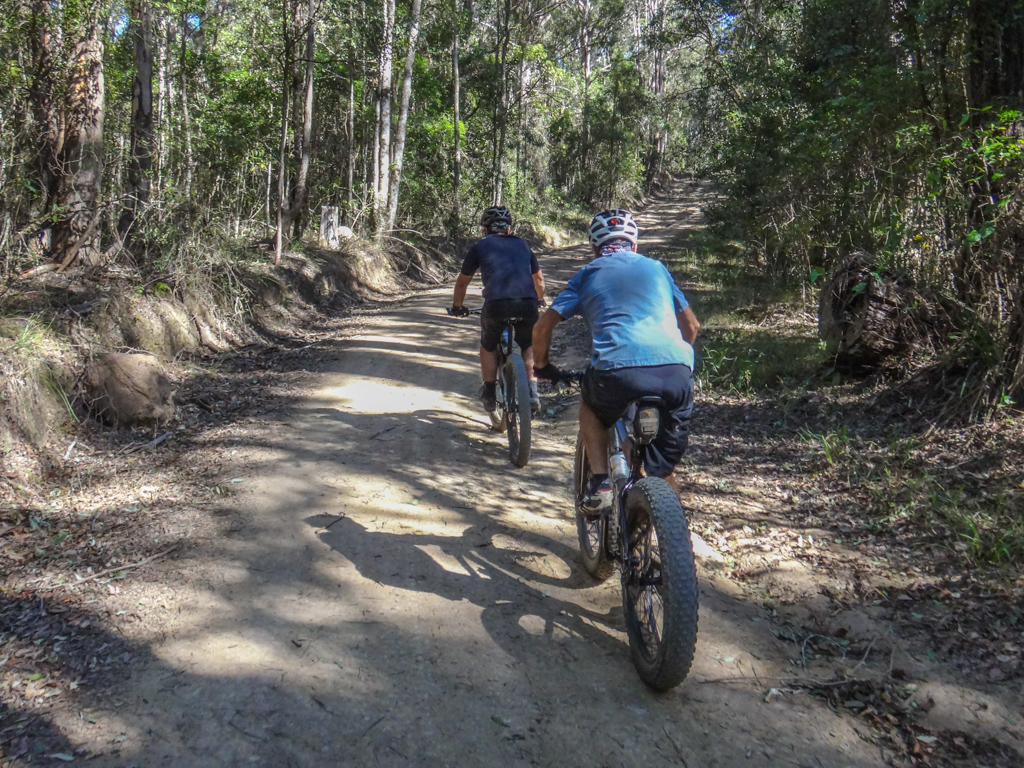 We eventually made it down the other side without any injuries.

It was a relief to again ride on gentle slopes and smooth terrain. 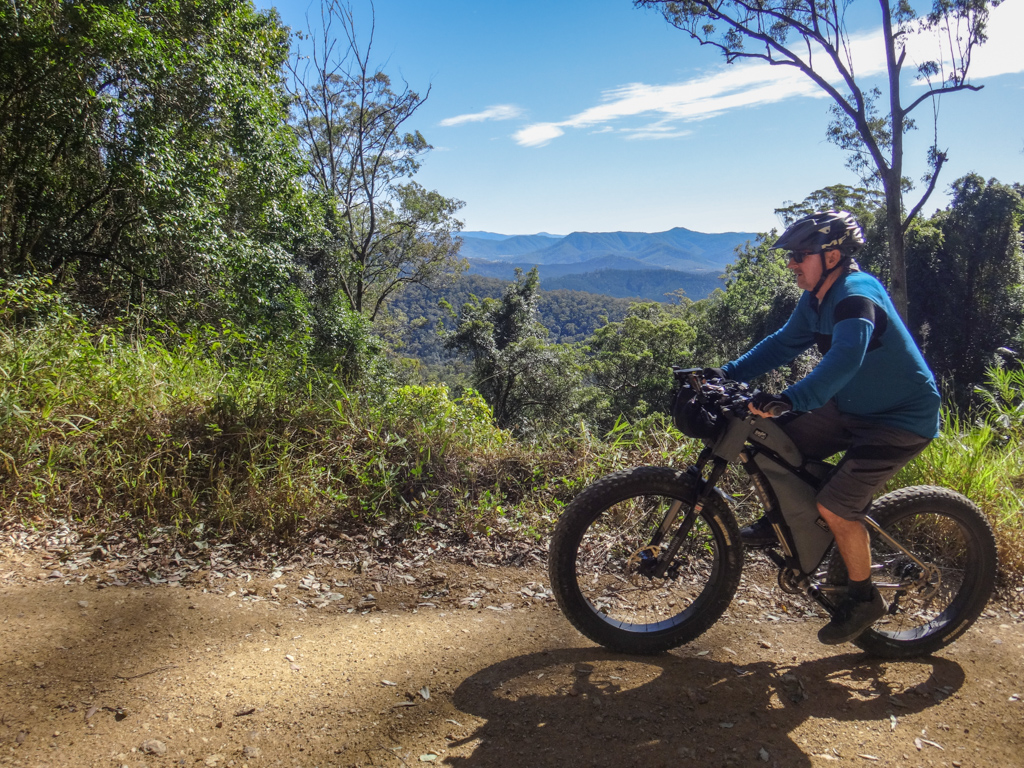 Our course took us along an undulating ridge following the mountain tops between Kenilworth and Imbil.

The slopes dropped off sharply either side, but the ridge rolled gently over the range through dense forest. 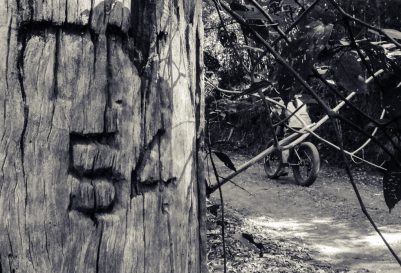 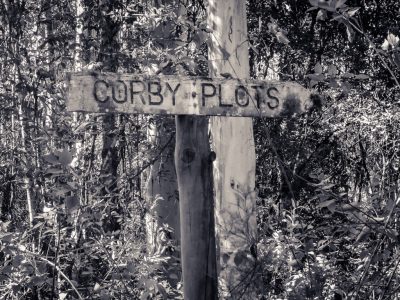 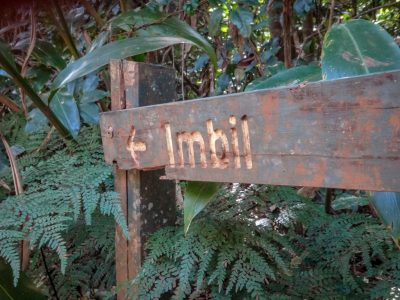 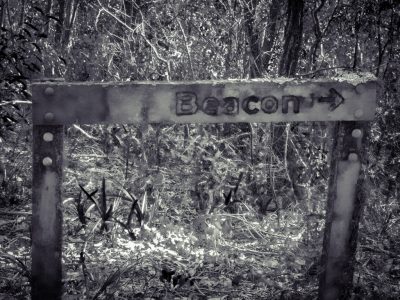 Either side of us old wooden signs pointed to various plantation plots and different tracks.

This complex maze of trails offers weeks of different riding options, but it would be easy to get lost without a GPS. 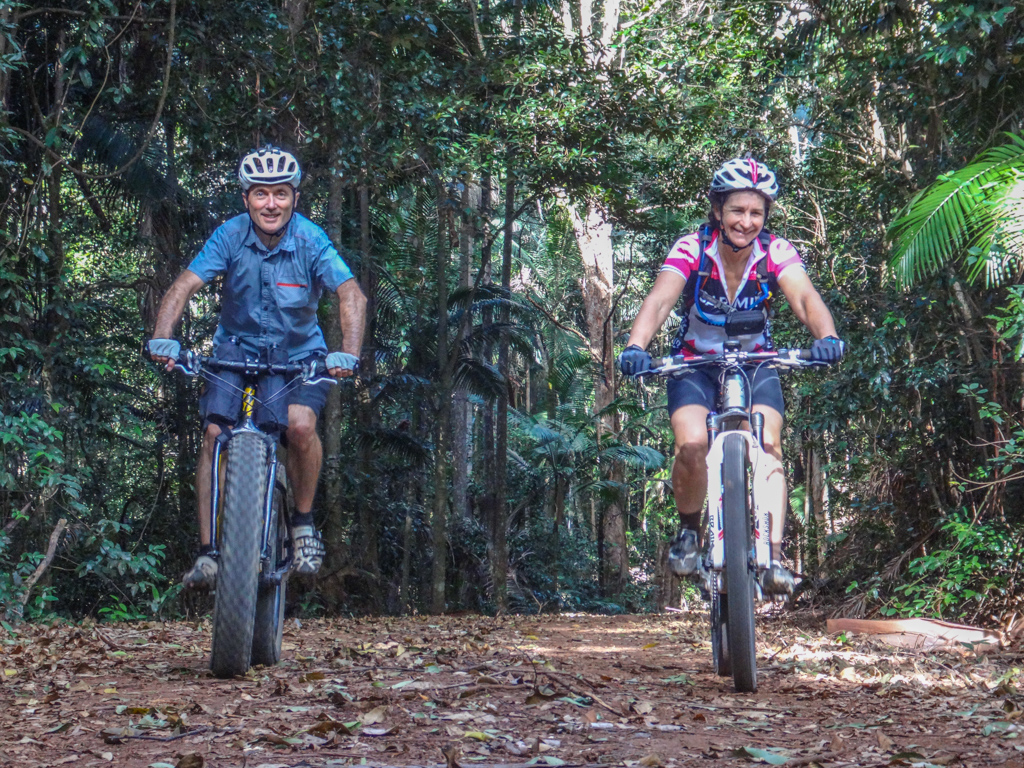 As we ascended, the open scrub slowly transformed into thick rainforest with tall trees towering over vines and piccabeen palms. Whipbirds echoed through the dark green shadows. 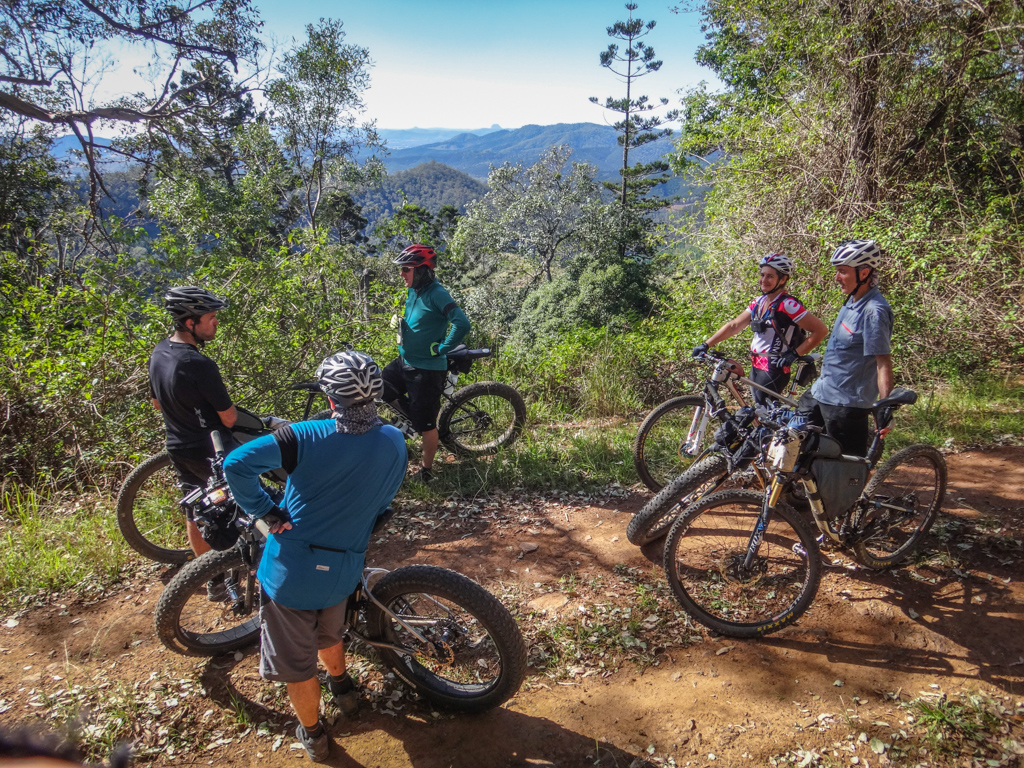 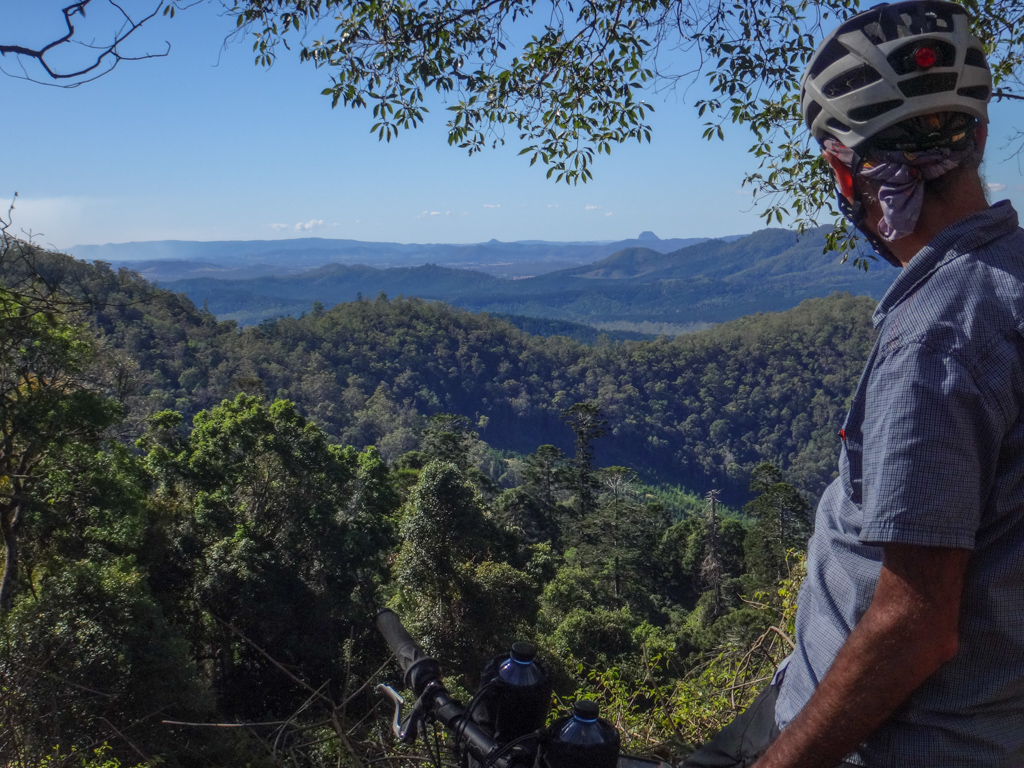 We stopped once or twice to rest our legs and survey the landscape below us: forests and hills as far as we could see. 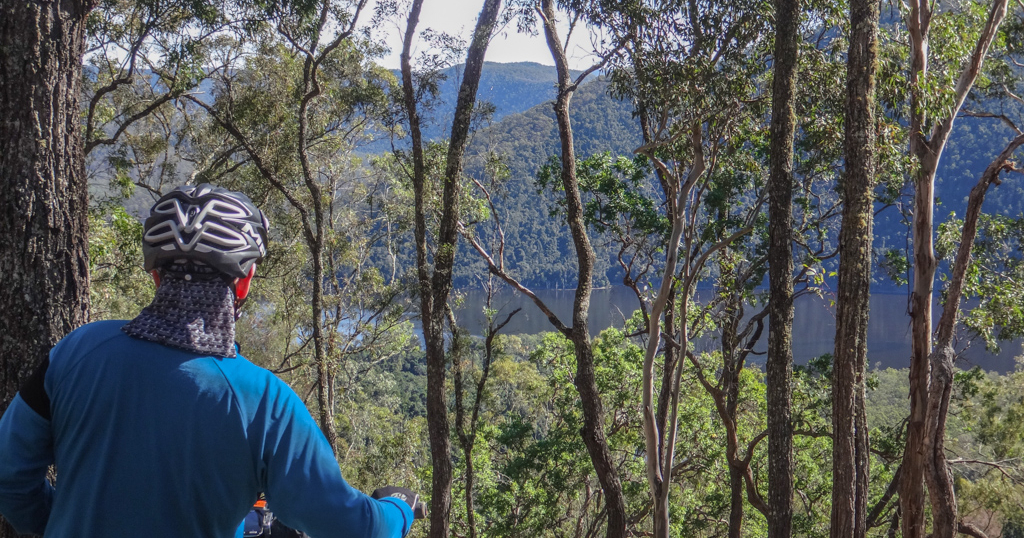 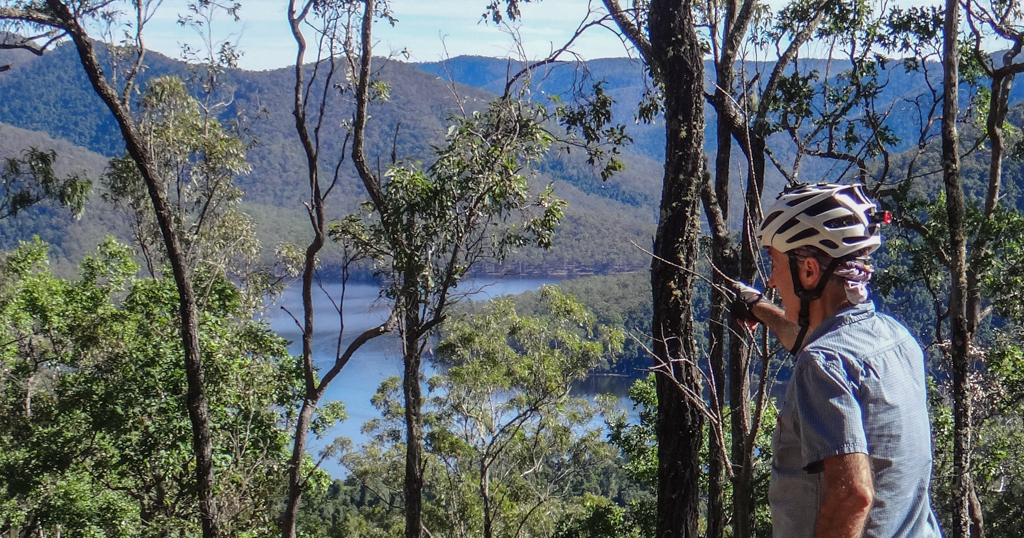 Towards the western end of our loop we stopped briefly at a point overlooking Lake Borumba.

This artificial lake was formed when a dam was built on Yabba Creek.  Somewhere below us the drone of a powerboat echoed from the surrounding tree-clad hills. 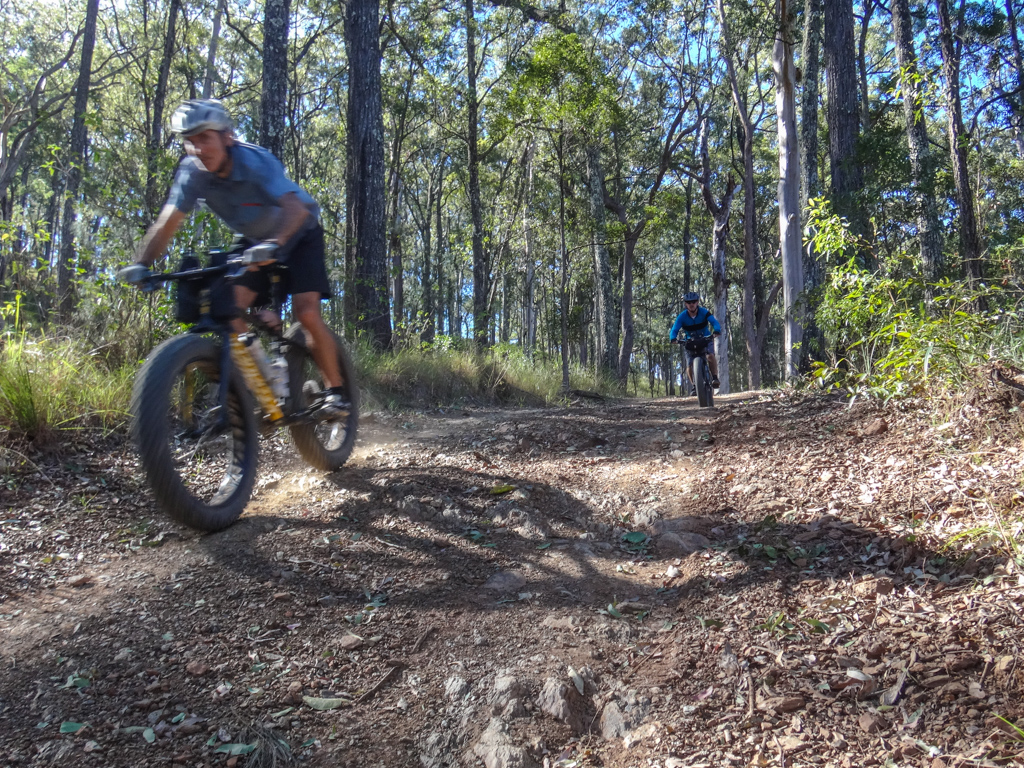 As we left the lookout we enjoyed one final descent down to the lake. 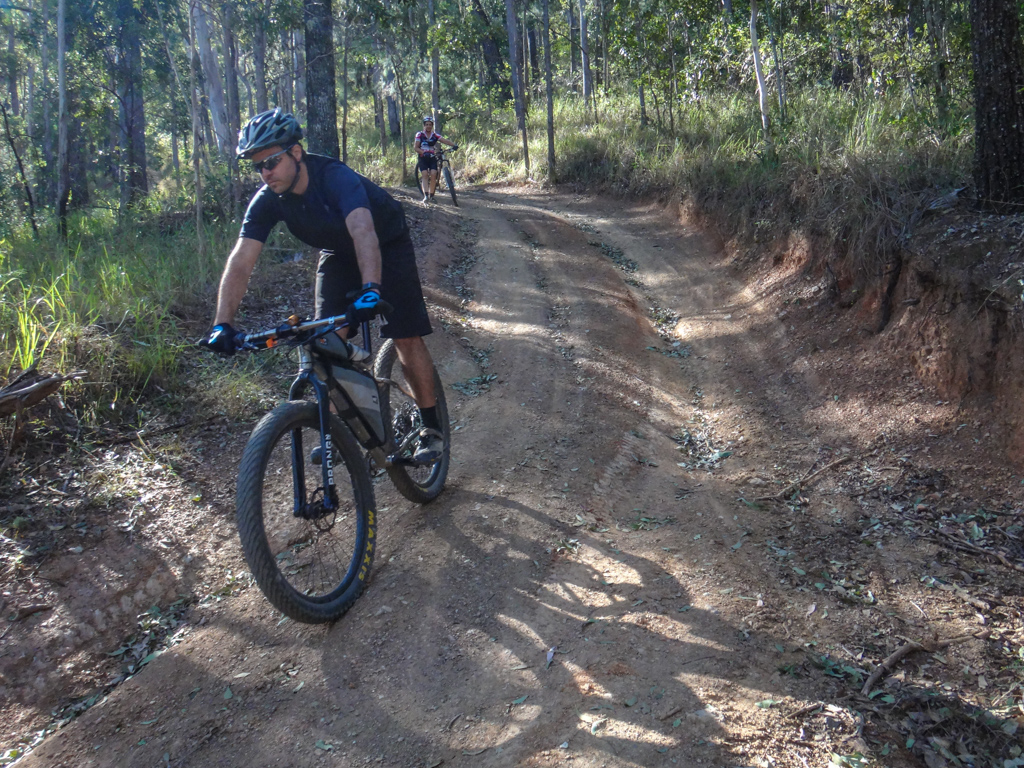 Although steep, these slopes were gentle compared with the treacherous drops we had ridden earlier in the day. 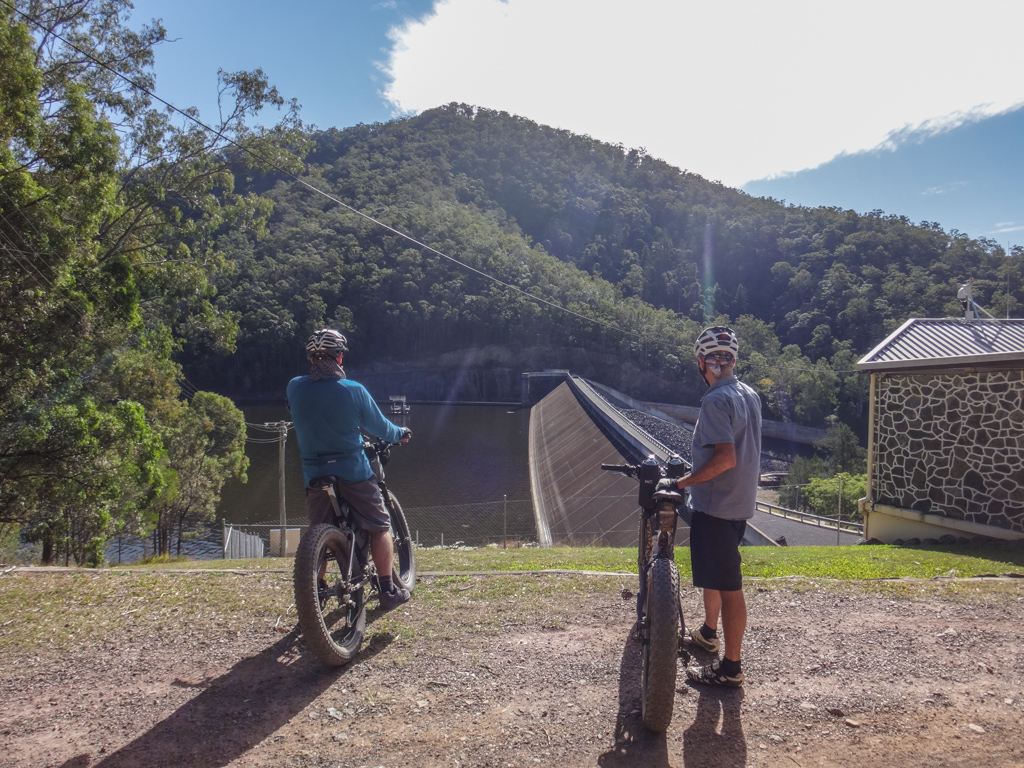 We stopped briefly at the dam wall to top up with water and discuss the remainder of our route.  Our legs were tired from the rough terrain and we agreed that we probably wouldn’t enjoy another big ascent up to Mount Kandanga today.  We had only come thirty-five kilometres but we had already climbed about 1,500 metres. 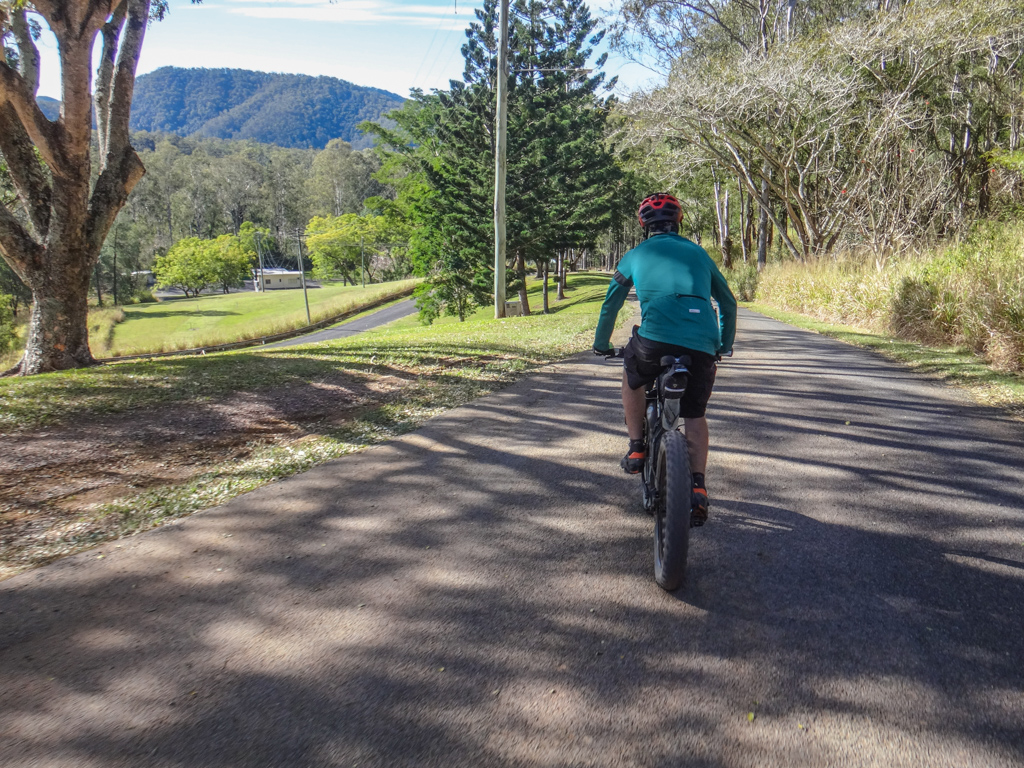 We decided to take the simple route home via the paved road. 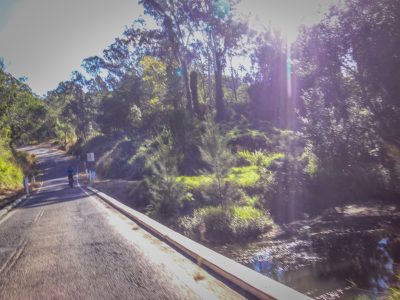 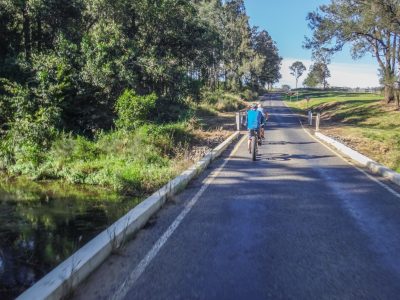 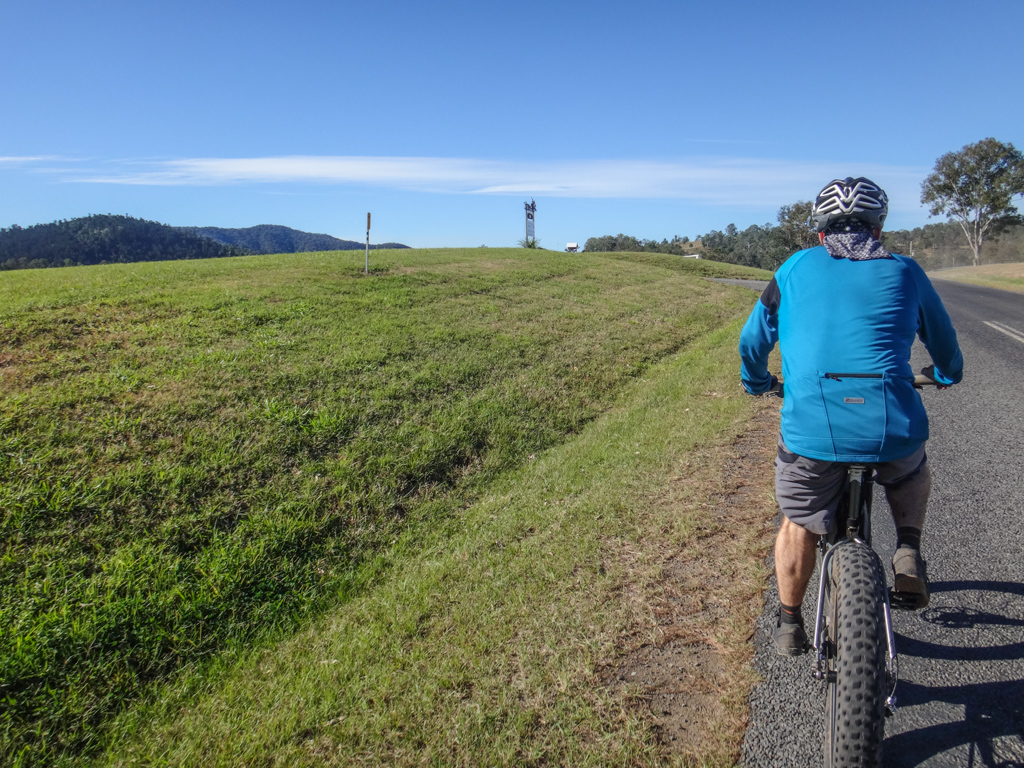 The Mary Valley is a beautiful place.
More data

We rode a total of 45 kilometres in about six hours including breaks.

During that time we climbed almost 1,600 metres in vertical ascent, and I burned about 3,150 kcal.

This is a challenging ride.  The terrain is precarious in places – a fall or slip could easily cause injury.  It’s also remote with numerous trails heading in different directions.  It would not be advisable to ride here alone or without a well-planned course.  Don’t do it in the heat of summer.

Thanks Mike for showing us around your beautiful back yard.

Thanks Adam and Darb for sharing your lovely photos with me.

Thanks Nick and Annick for joining us today and helping to make this another memorable ride.