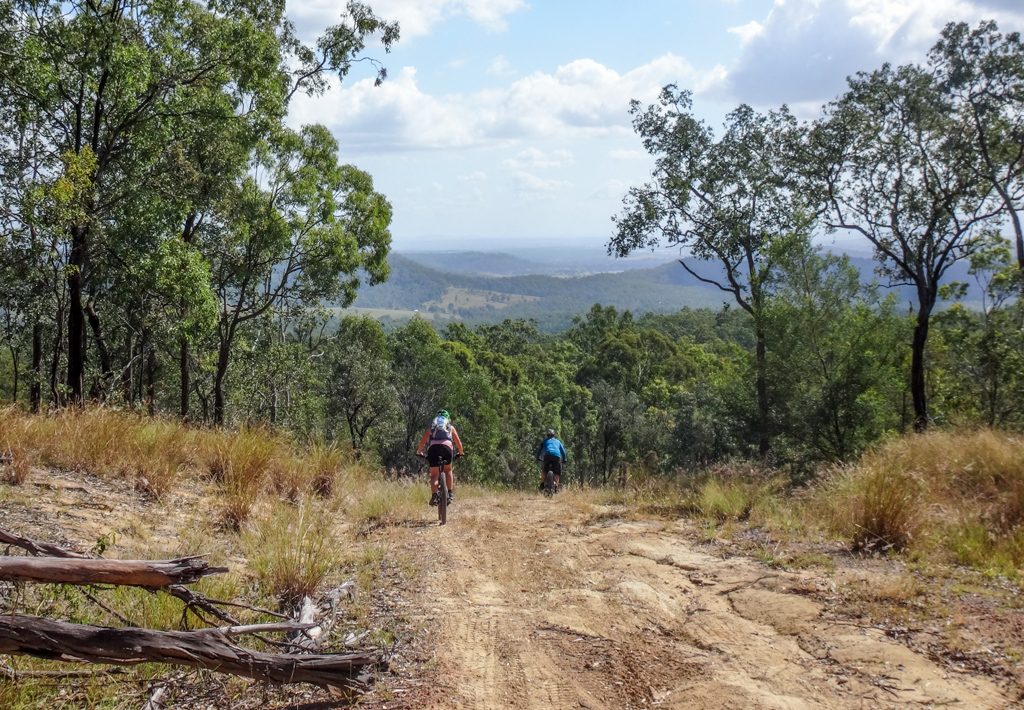 Kagaru is a small rural community near Beaudesert in South-East Queensland. Today we explored some rugged bushland in the area. 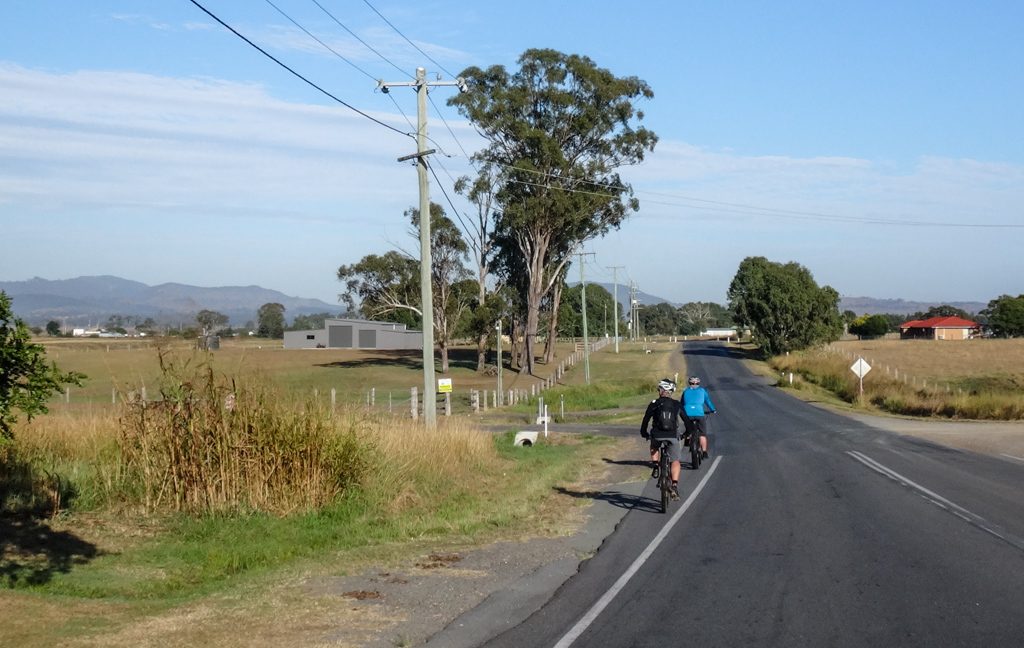 We started at Gleneagle on the highway to Beaudesert, and rode west through quiet farmland.

Our long Queensland summer has come to an end. The new season has brought with it welcome cooler temperatures and clear skies. In this part of the world, the end of summer is the perfect time for long strenuous rides.

The jagged edge of a distant summit loomed on the horizon.

“What mountain is that?” someone asked.

“Flinders Peak,” I replied. “We’ll be riding close to it later on.”

It seemed so far away for now. 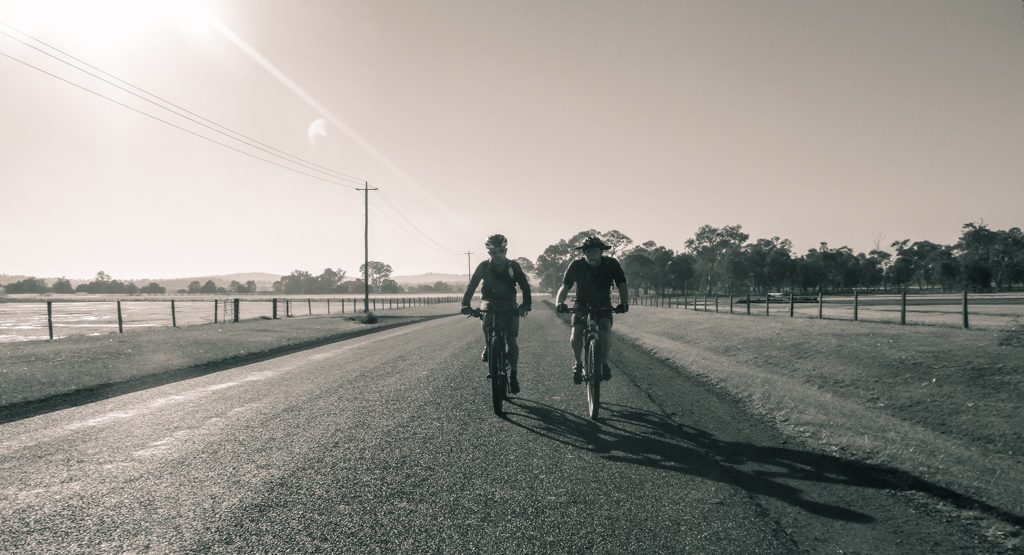 For about half an hour we coasted on long flat paved roads. Mountain bikers prefer dirt, but sometimes it’s nice to chill out on an easy quiet road, especially when there’s hard work ahead.

We clunked over an old wooden bridge, crossing the interstate railway line – a long ribbon of steel which pointed unflinchingly north towards the city.

It’s unusual because it has three rails. It’s a dual-gauge line because Queensland and NSW trains need rails of different widths.

It’s an old story that Queensland school children learn in primary school. Our teachers tell us that back in the 1860’s when the fledgling Queensland Government decided to build a railway, they didn’t have much money in the bank. When you space railway lines further apart, you need more wood for longer sleepers. NSW had a railway gauge of 4’8 1/2″ – Queensland couldn’t afford that much wood, so they decided to build a narrow gauge railway with rails only 3’6″ apart.

The result was disparate railway systems, culminating in this dual-gauge line which attempted to redress the issue. 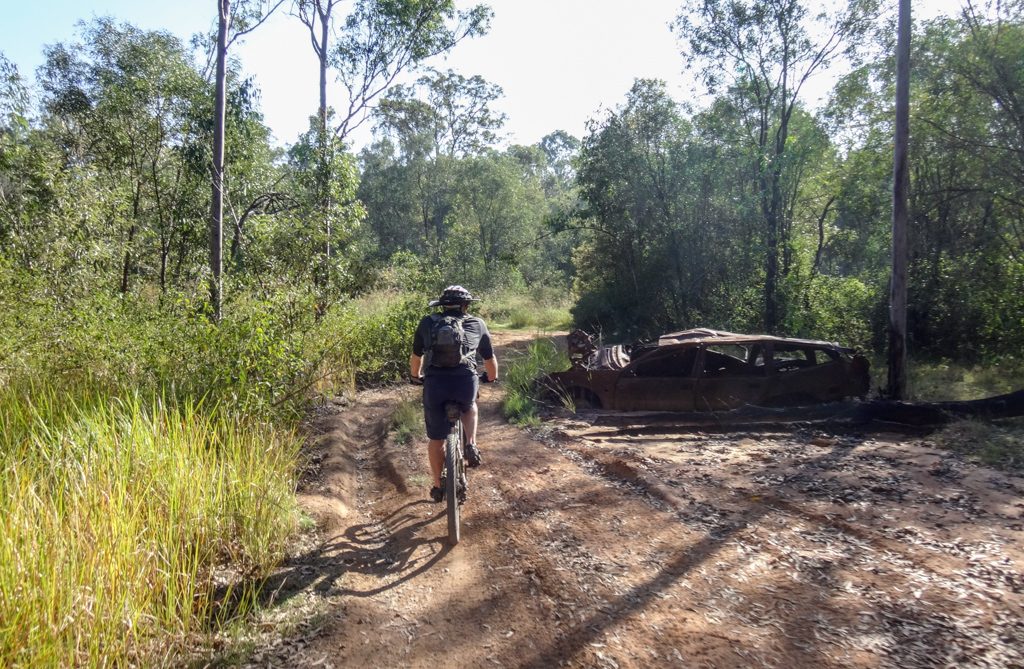 From here we left the paved road and followed a secluded bush track past rusting old car wrecks. 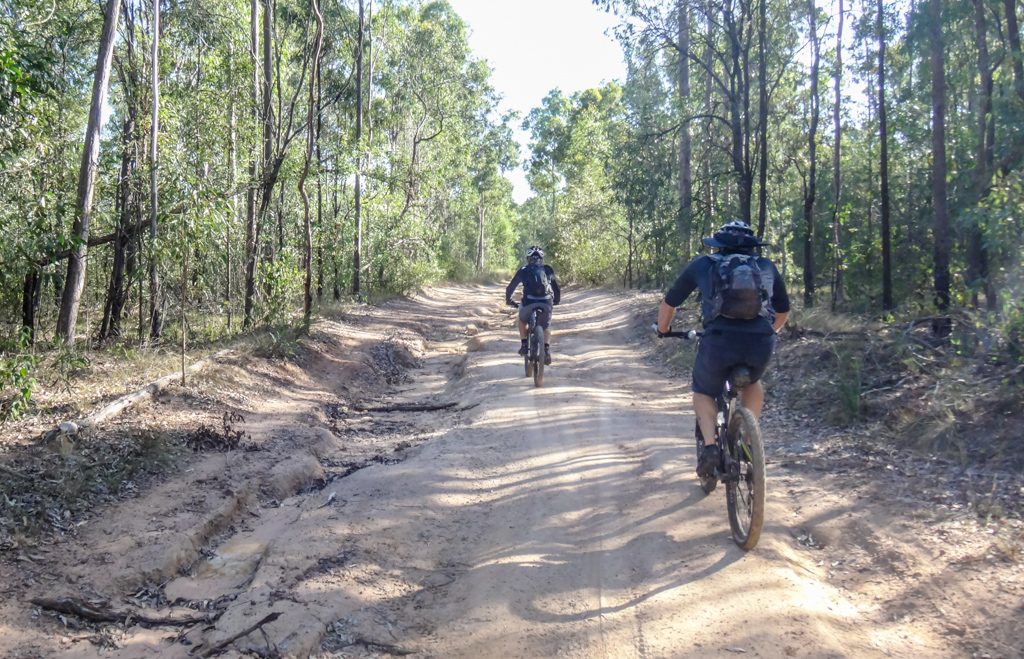 I had often looked at aerial photos of this parcel of bushland, wondering what it would be like.

It’s huge, stretching from Kagaru in the south all the way to Springfield near Ipswich in the north.

I thought we should explore it soon because of increasing land clearing and property development in the area. I had no idea if or when this land might be cleared. 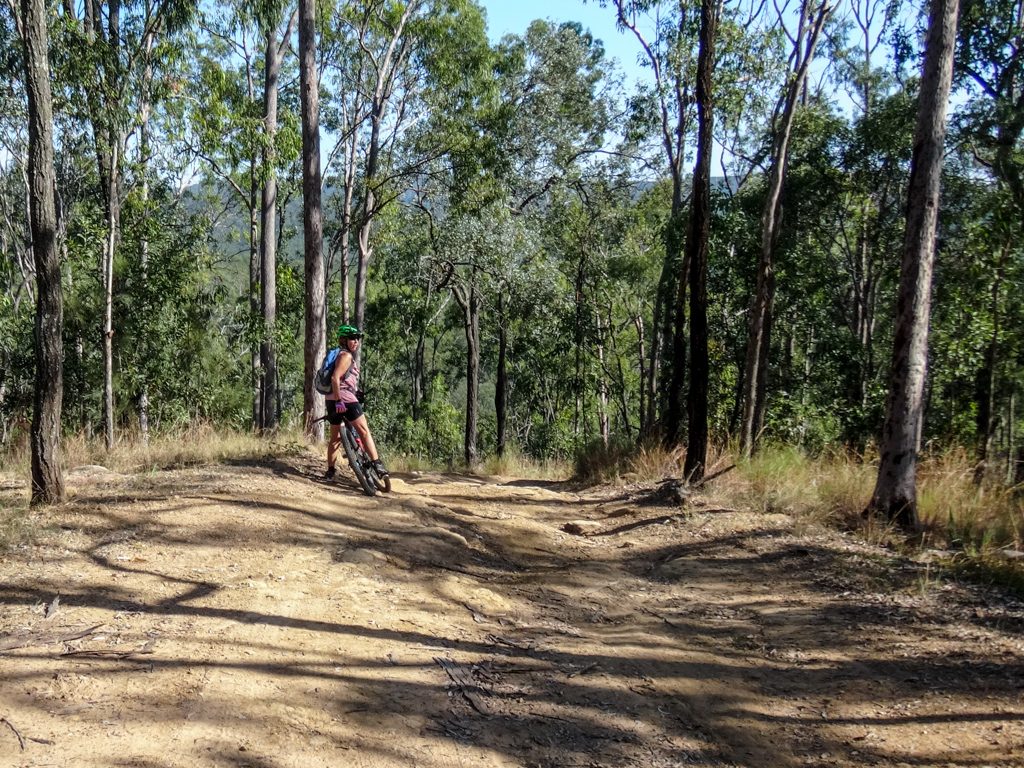 We climbed for a while before reaching our first steep descent.

“I’ve been here before,” Kaye said. “Is this near Jimboomba?”

Kaye was right. We were actually quite close to Jimboomba. In hindsight we probably could have started our ride from there. 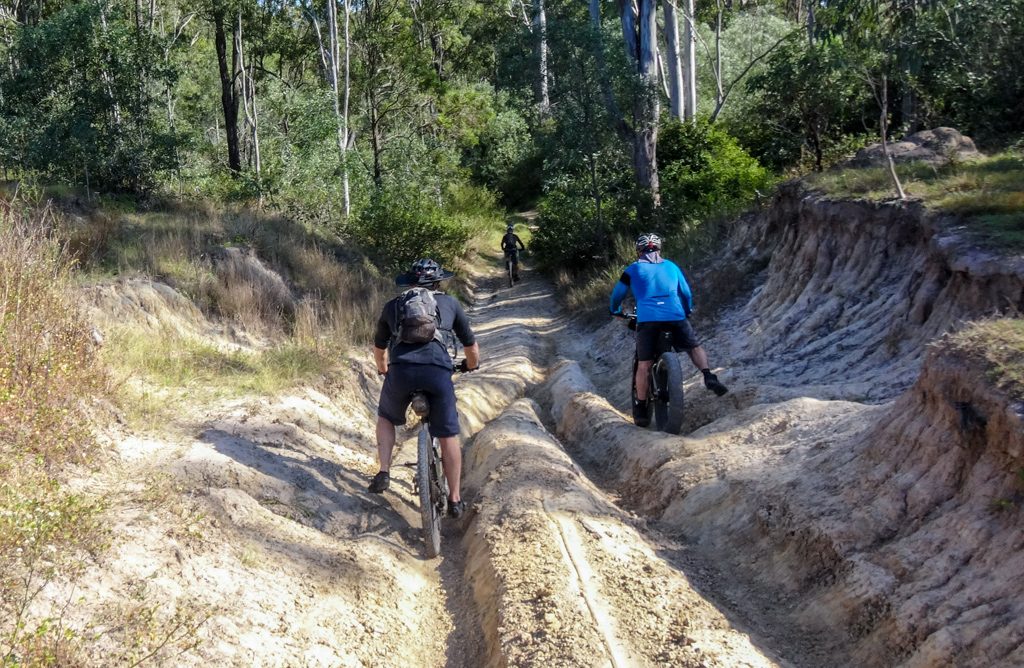 The track became rougher further down the hill.

Ruts are tricky to ride. Once your wheels roll at the bottom of a rut, it’s hard to escape. The bike is like a train on rails, and you have to either stop, or follow the rut to the end.

I stopped and walked 🙂 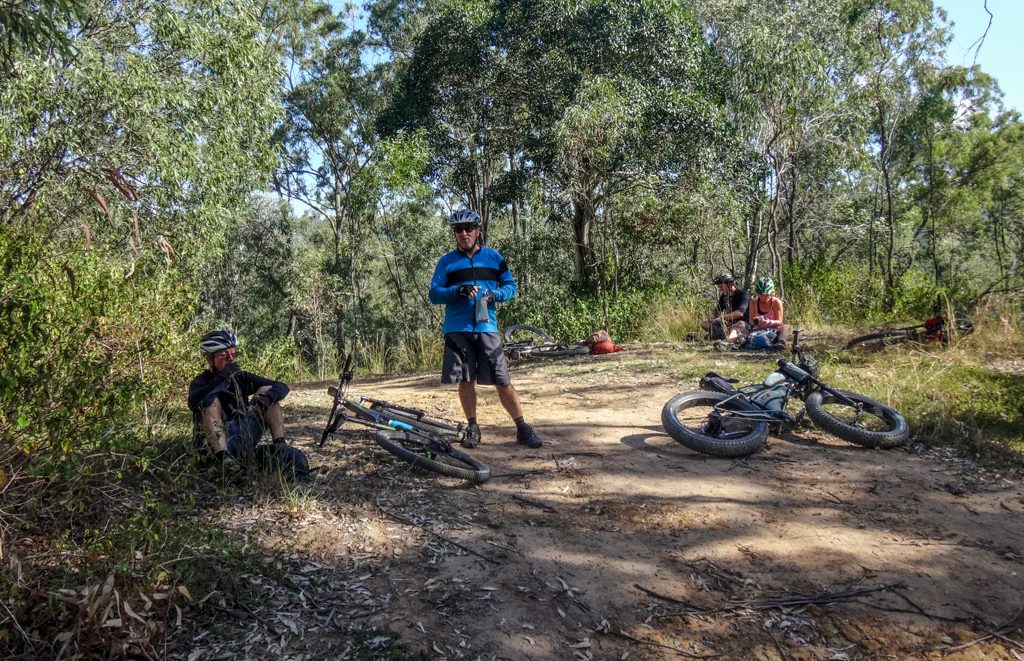 We took a short break at the top of a steep hill.

I took a glance at the elevation profile. An even larger slope loomed ahead. 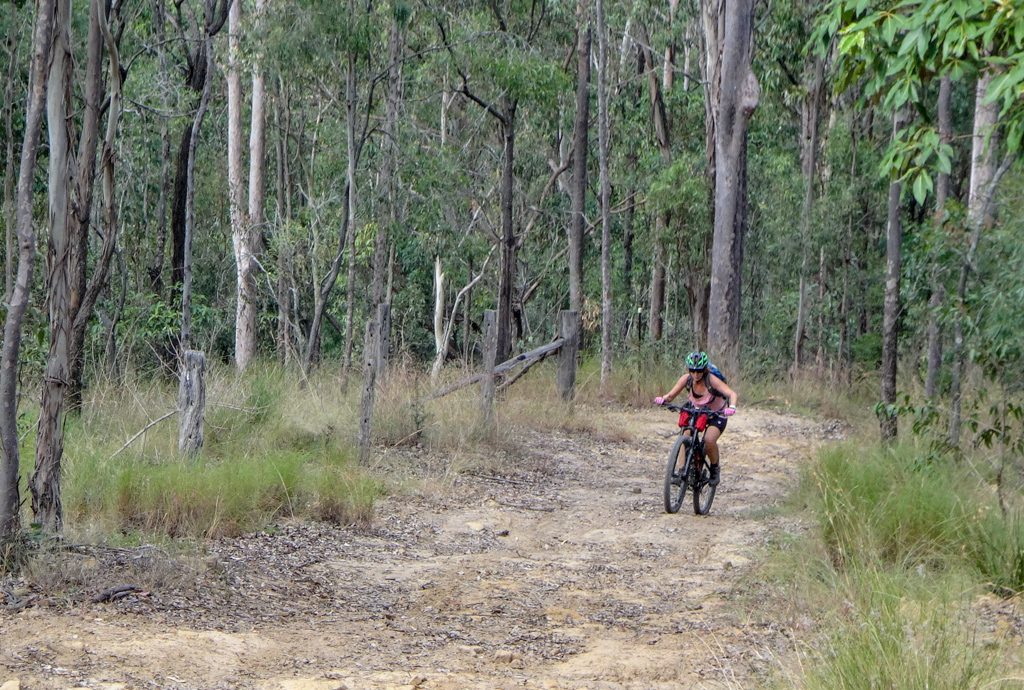 We pushed the bikes up the steep hill, occasionally riding when the gradient allowed. 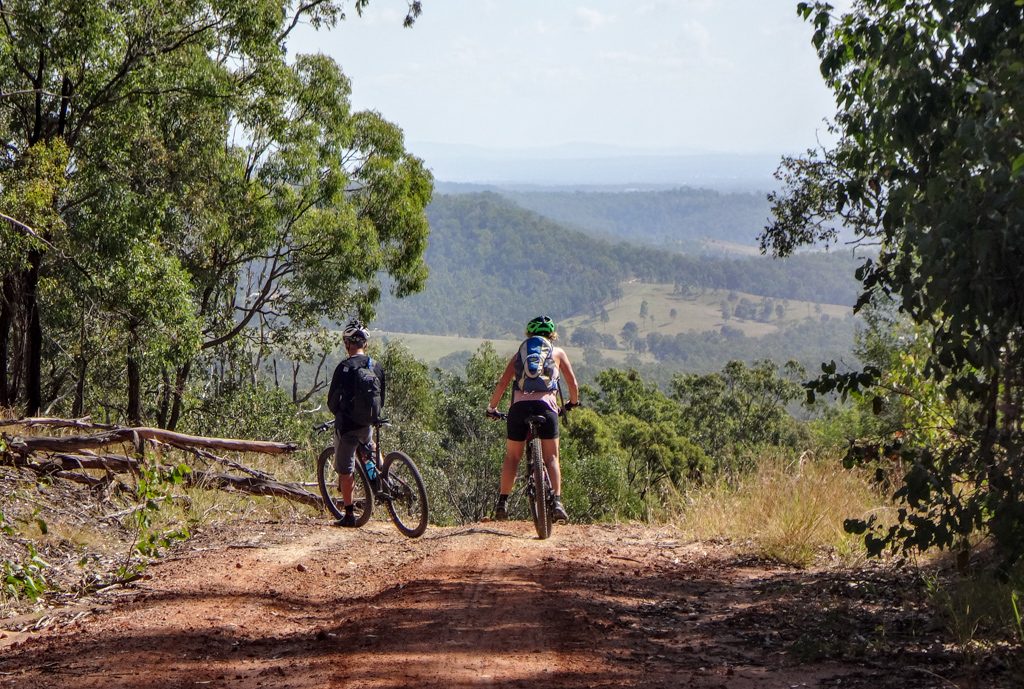 The views at the top were impressive.

We could see all the way north to Ipswich. 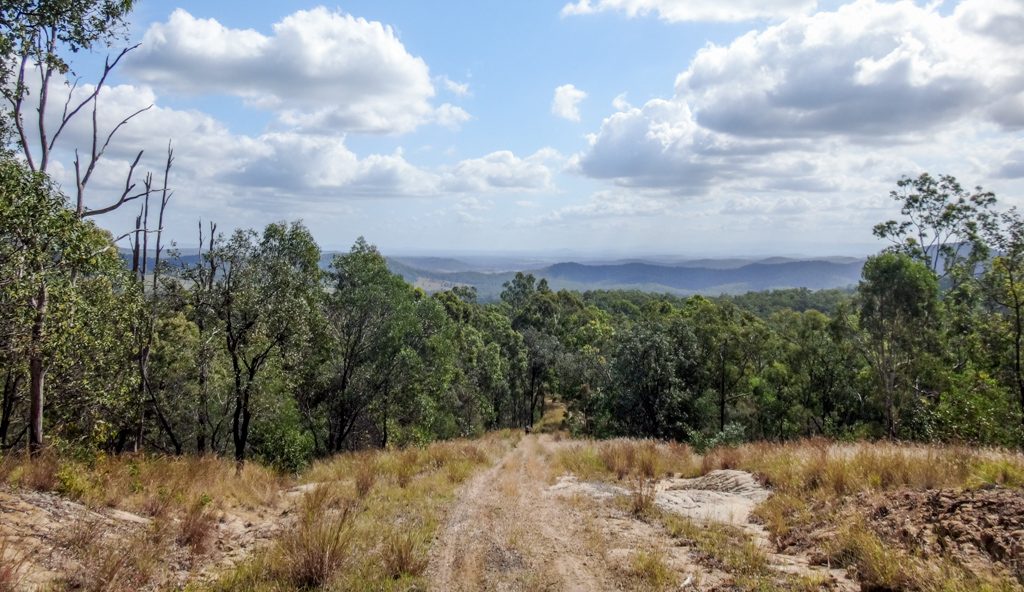 After admiring the panorama for a short while, we jumped back on our steeds and bounced down the hill. 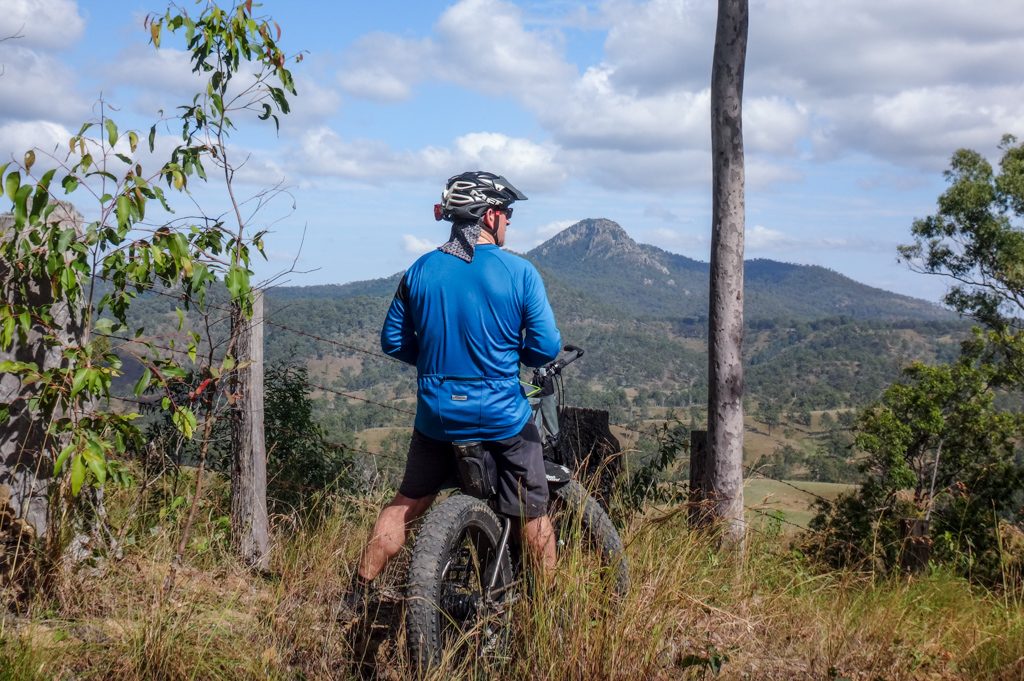 Flinders Peak grew large to our left. At the start of the day it was just a shadow on the horizon, but now it was close.

It’s amazing how far you can get on a bike in a few hours. 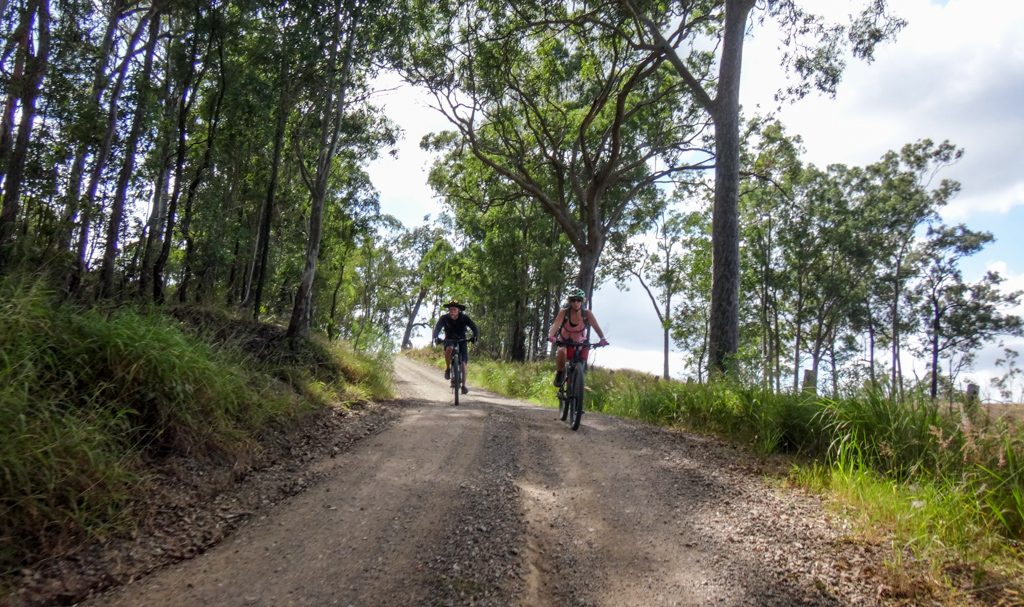 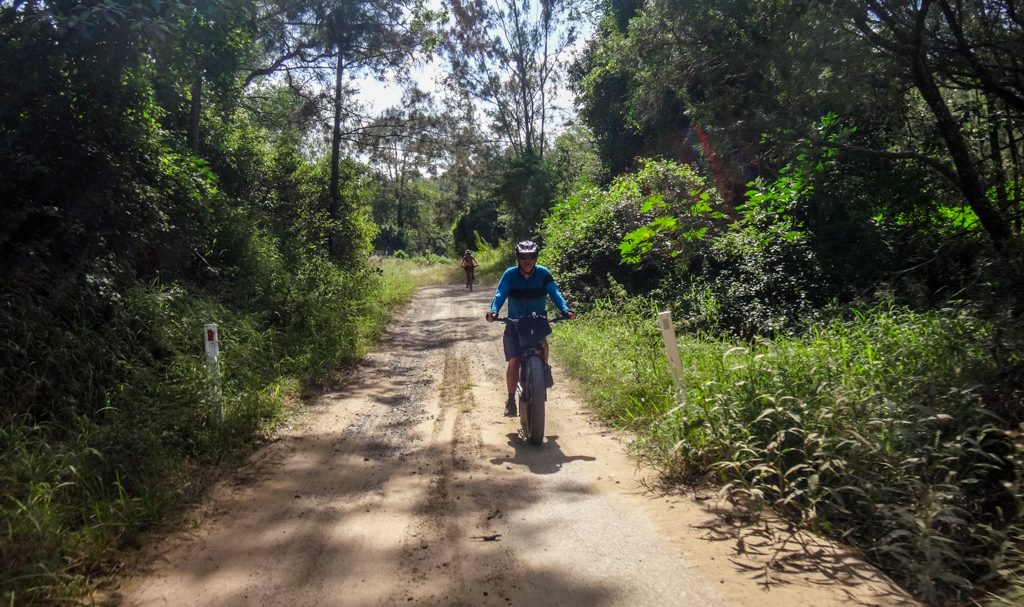 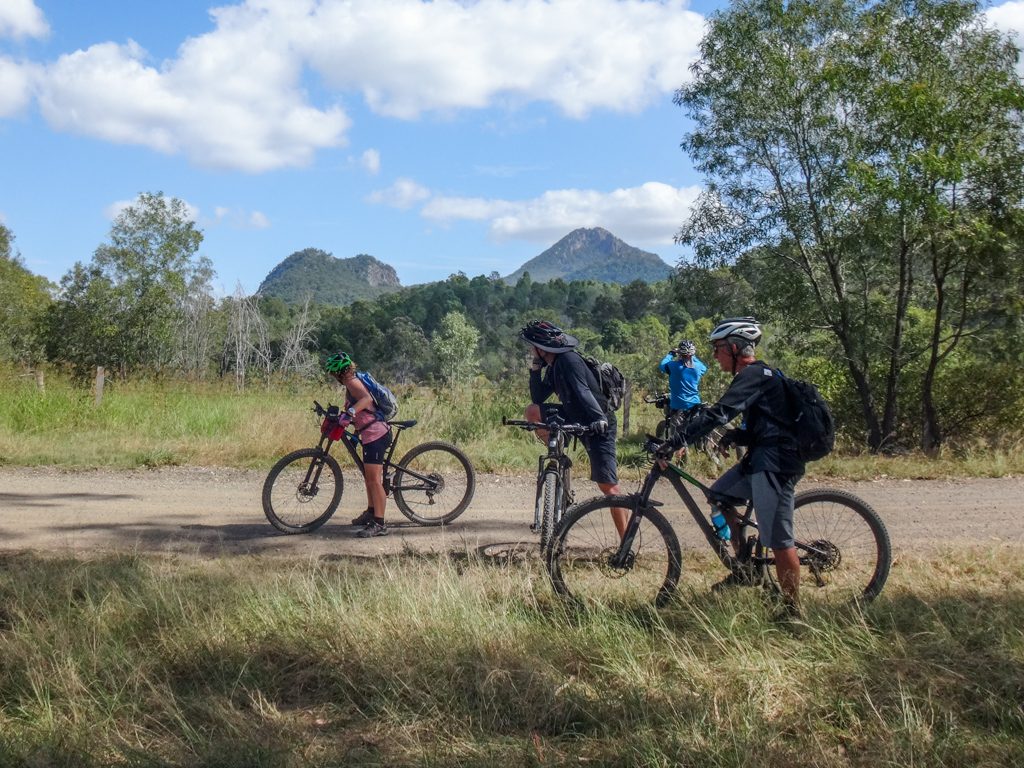 We’ve ridden through here on several occasions. From this point it was easy to separate the peaks of Mount Elliot on the left and Flinders Peak on the right.

In the past we’ve had a lot of fun riding down Mount Elliot Road – a long steep gravel road with a couple of hairy bends.

Today we’d be continuing south instead. 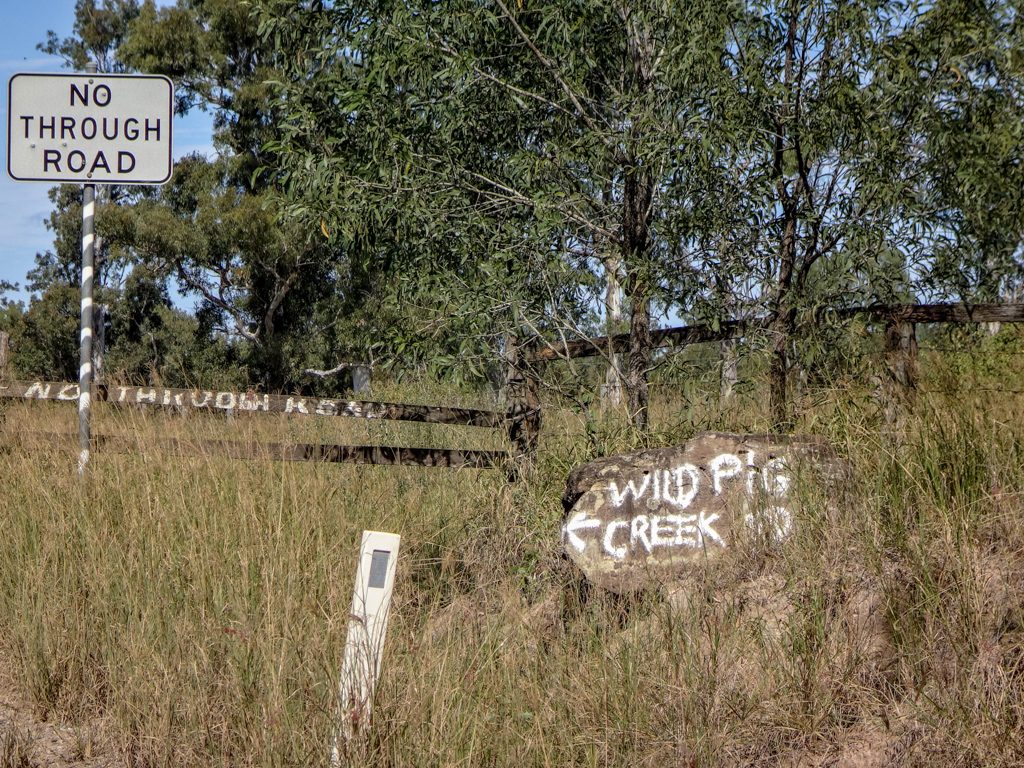 The street signs around here are great. 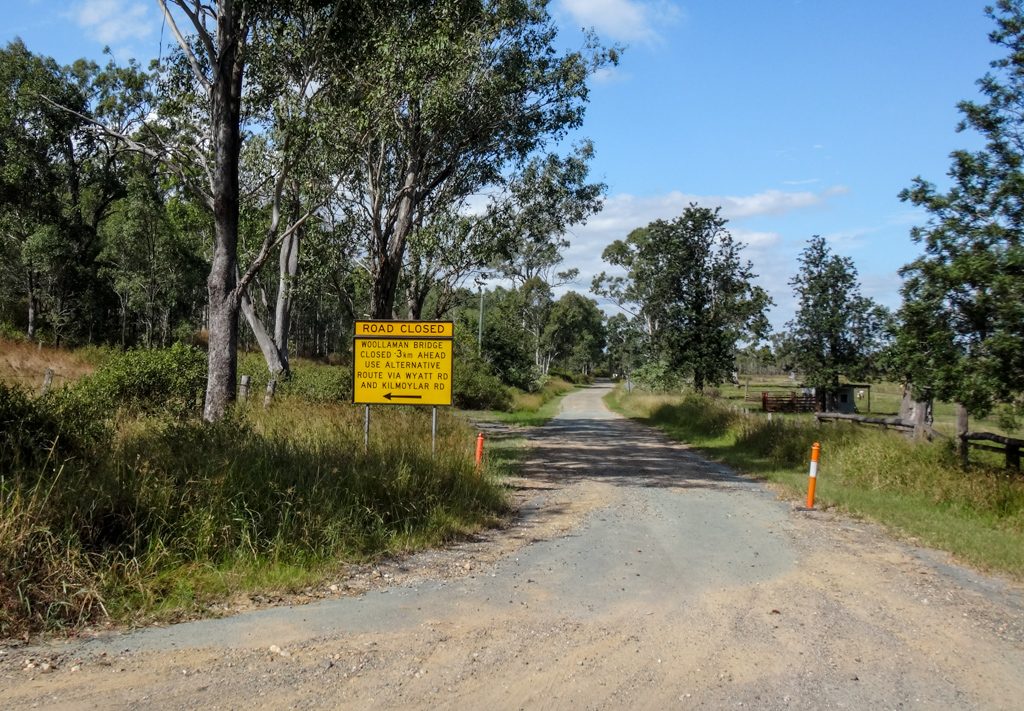 The bridge over Woollaman Creek was no longer there. One of the locals told me it was destroyed by fire a few years ago.

Despite that, I thought it would be worthwhile having a look at it. Perhaps we could cross the creek on foot, if the water wasn’t too deep. 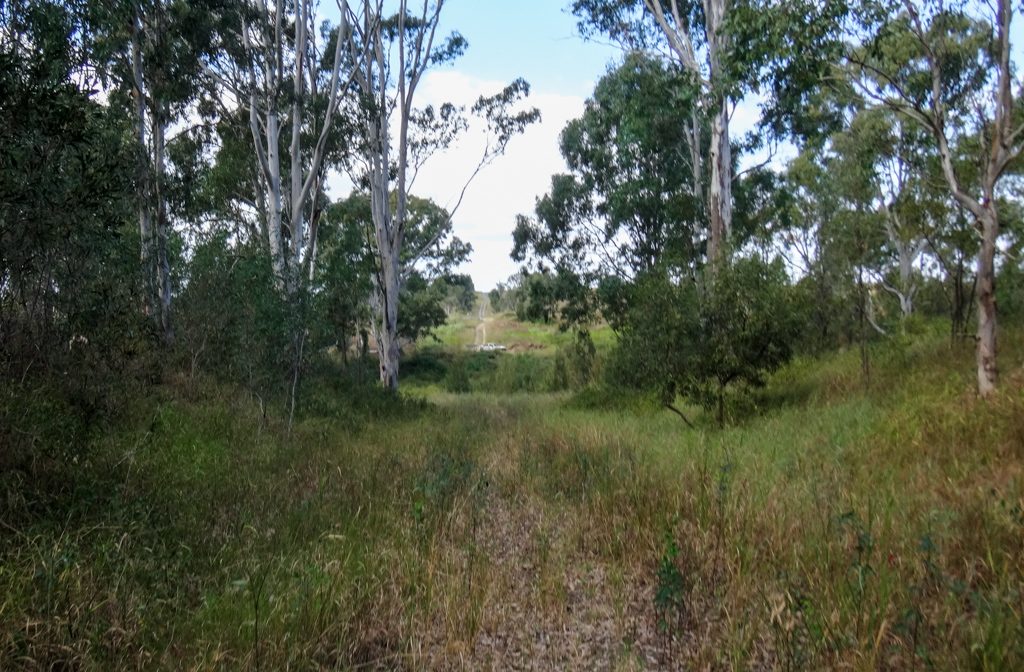 The road was overgrown due to lack of traffic. 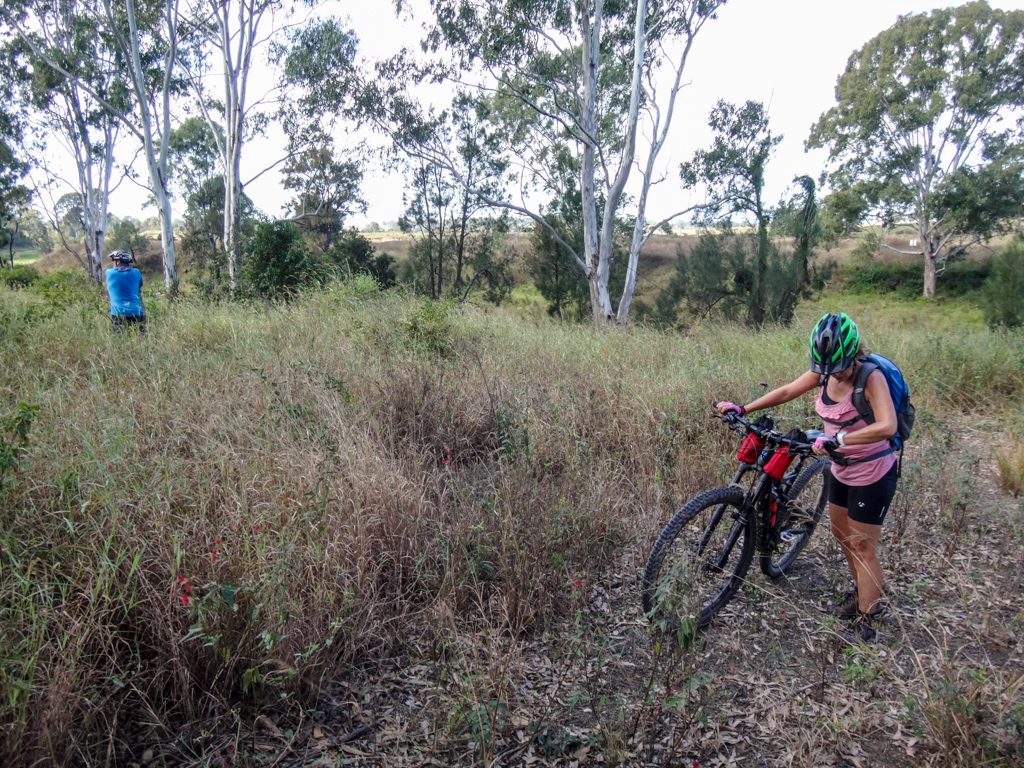 Nope – we weren’t going to get through here. The banks were too steep and the water too deep.

We reluctantly retraced our steps and took the paved road back. 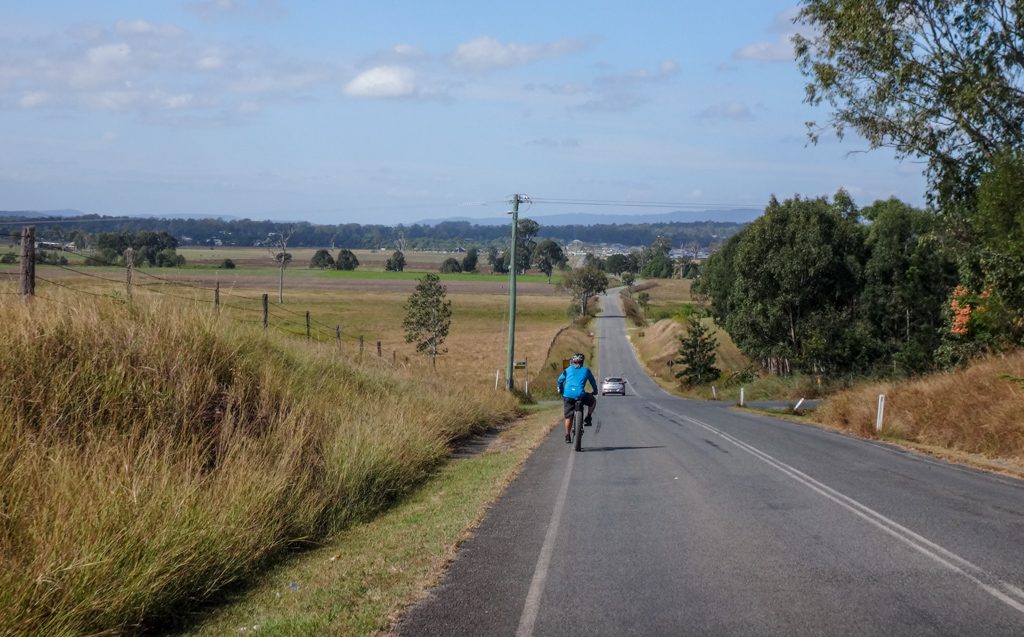 Back on the bitumen, the miles flashed by. 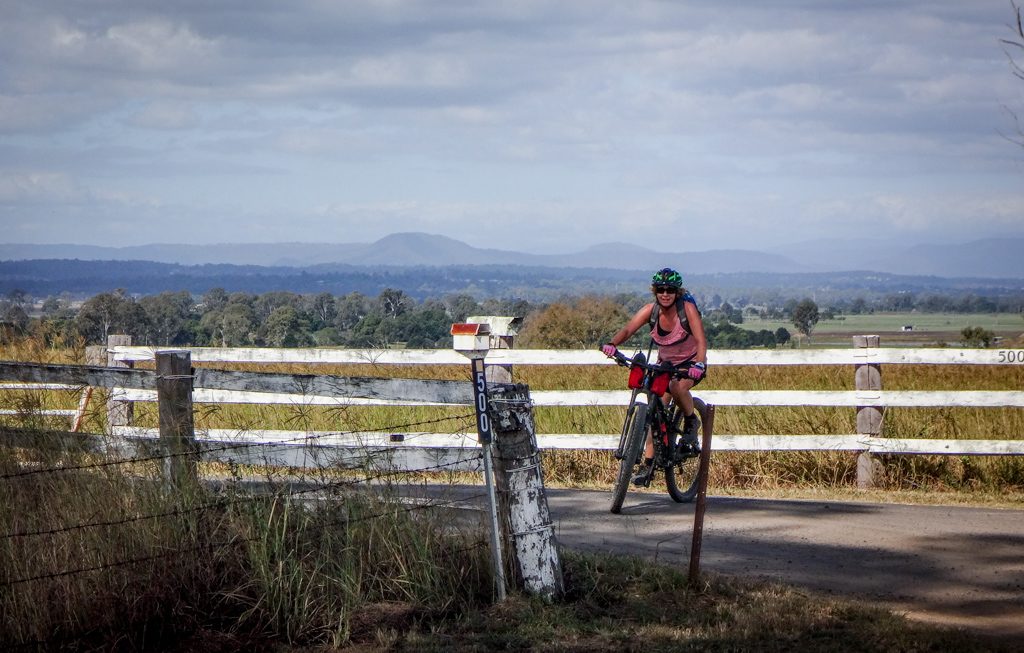 Sometimes I feel like there is so much to see and so little time.

We rode about sixty-three kilometres in five and a half hours. During that time we climbed about 1,700 metres and I burned about 2,800 kcal.

This was a pleasant ride in perfect weather. The only challenging bit was the long steep climb up Rice Road. I’ll rate it 8 out of 10 on the tough-o-meter.

Thanks Darb, Eric, Kaye and Jason for another fun day out!

(Technical note: I’m having problem with some of my maps. The garmin track log doesn’t seem to be working on some browsers (Firefox Quantum), and instead of a map you just see a big white square. I’m experimenting with a new mapping system. If it works I’ll gradually update older blog posts to the new maps. If you have any problems seeing the maps, please let me know).