The Bicentennial National Trail (BNT) passes right through the middle of Kilkivan, west of Gympie.  This delightful small town was the perfect place for us to start today’s adventure. 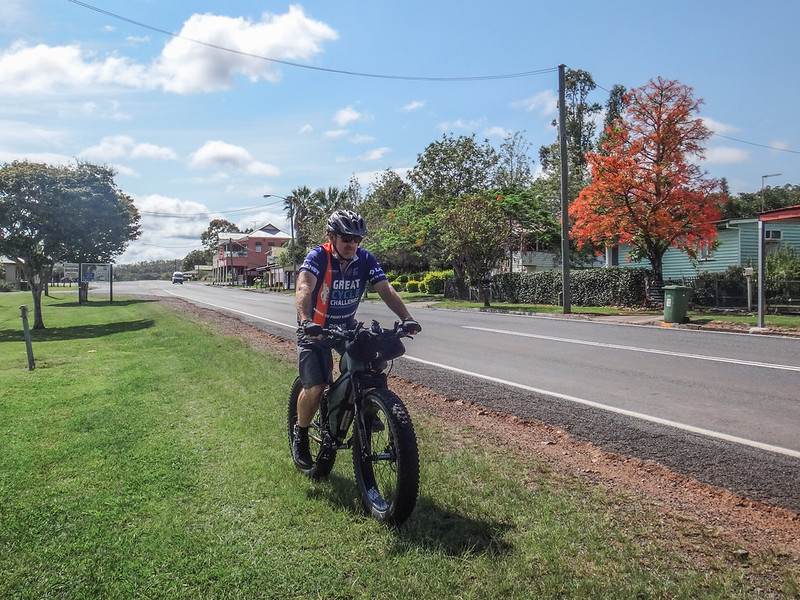 The forecast for this late spring day was “hot with thunderstorms”, so we packed plenty of water (and rain jackets) and set off from Kilkivan towards the hills to the south.  We planned to trace out a large loop heading south to Black Snake, then returning to town via the BNT.

Kilkivan has a fascinating history.

It sits close to the border between the traditional lands of the Gubbi Gubbi and Wakka Wakka indigenous people.  Mount Boo-Boo, just a couple of kilometres out of town was used to send smoke signals by men who had recently been initiated in a Bora ceremony.  “Boo Boo” means “Big Smoke”.

It also sits astride an old railway line that once stretched from Gympie to Kingaroy.  The railway line supported the timber, farming and mining activities in the region.

Gold was first discovered here in 1852, sparking a gold rush in the Gympie region.  This was the first gold ever discovered in Queensland, and the revenue from the precious metal provided a much-needed injection into the finances of the newly formed state.

The railway line closed in 2011, and there are hopes that it will eventually form part of a rail-trail between Kingaroy and Theebine. 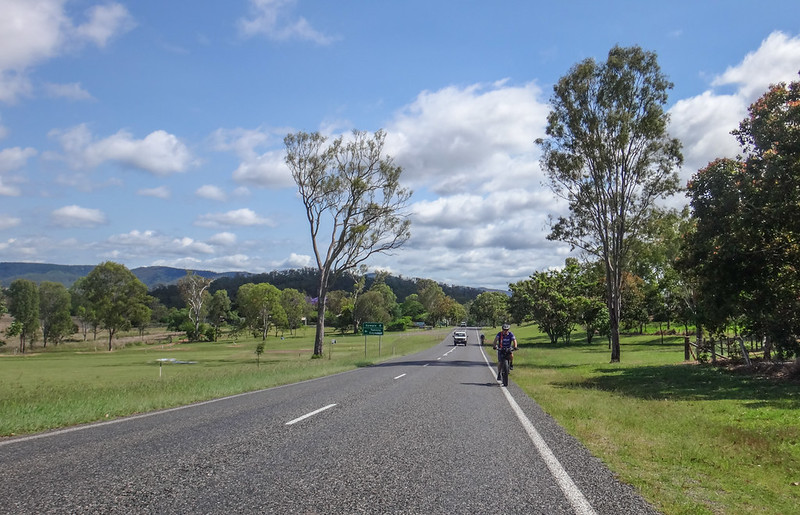 We had to follow the Wide Bay Highway for a few minutes as we rode out of town, but it was a quiet day, and it didn’t take long before we left the paved road behind. 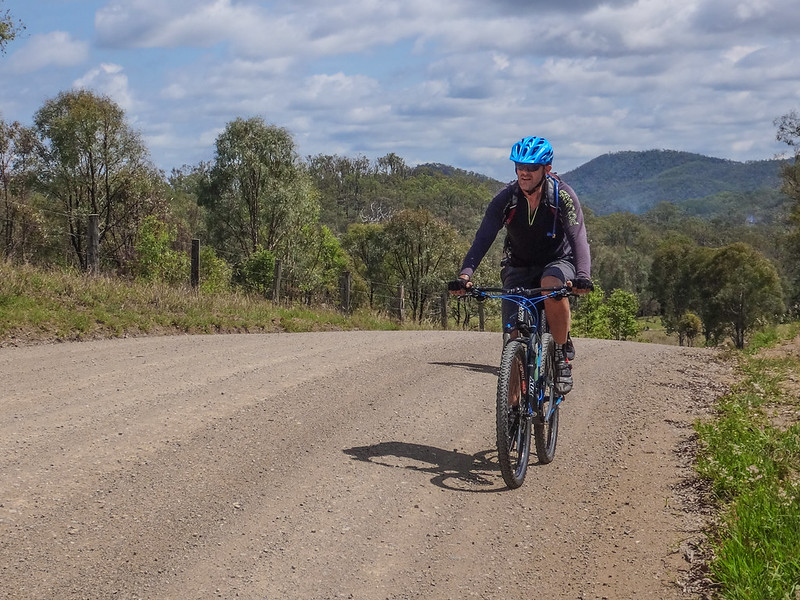 Black Snake Road twisted over rolling hills through green farms towards the strangely named locality of “Black Snake”.  I wondered what sort of creatures we’d find there. 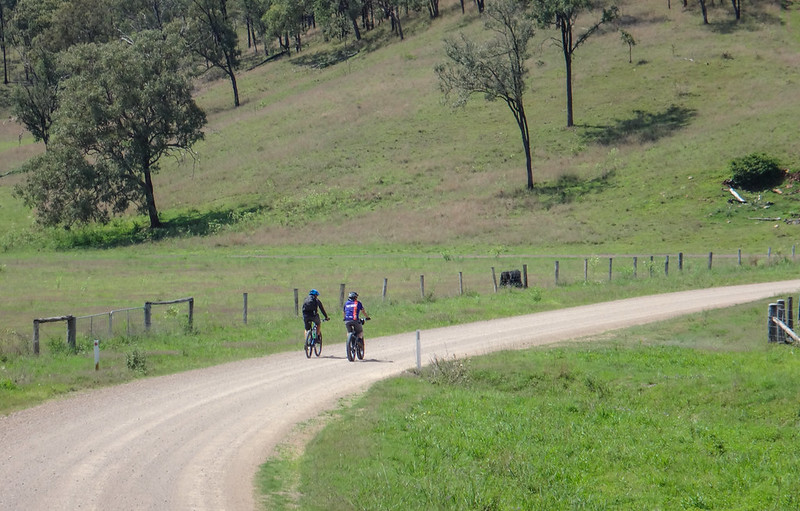 I had ulterior motives for following this road.

Paul had ridden up the BNT south of Kilkivan the week before, and told me how steep it was.

Since we were riding a loop, I figured it would be easier riding down those steep hills rather than up them.

The solution was to get up into the hills via an easier route – Black Snake Road, then enjoy the downhill thrills later in the ride. 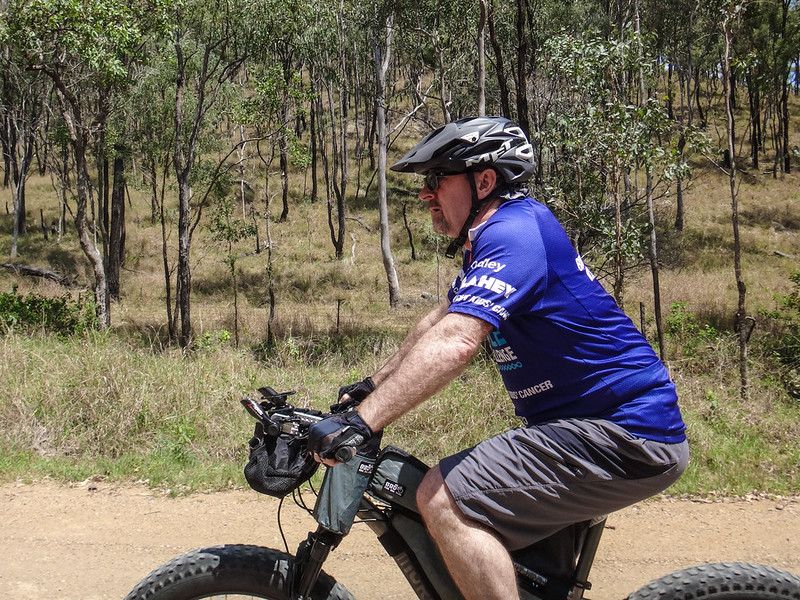 This was certainly an easier route.  For about fifteen kilometres we enjoyed a fairly “cruisy” ride along the quiet gravel road.

We had a short break when the GPS told us the gradient ahead was about to get steeper. 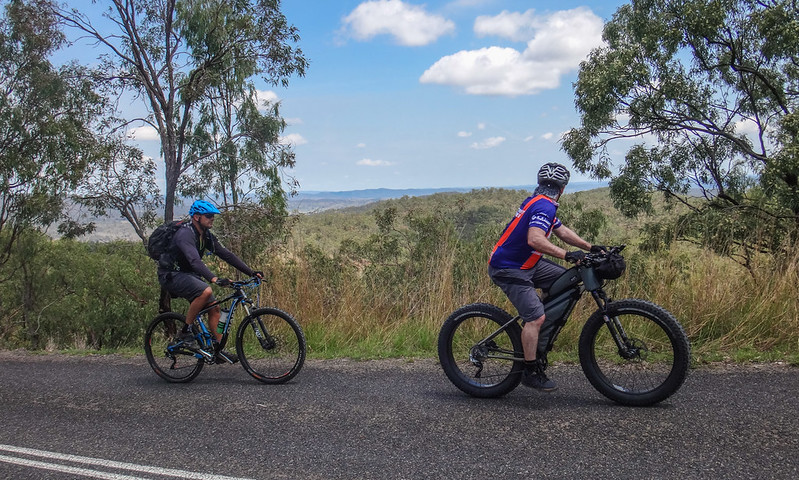 “Gee it can’t be good if the road is so steep they have to pave it!”

Darb worried that the short section of paved road at the bottom of the hill meant that it might be steep.

It was – but Darb beat Paul and me to the top, so he didn’t need to worry. 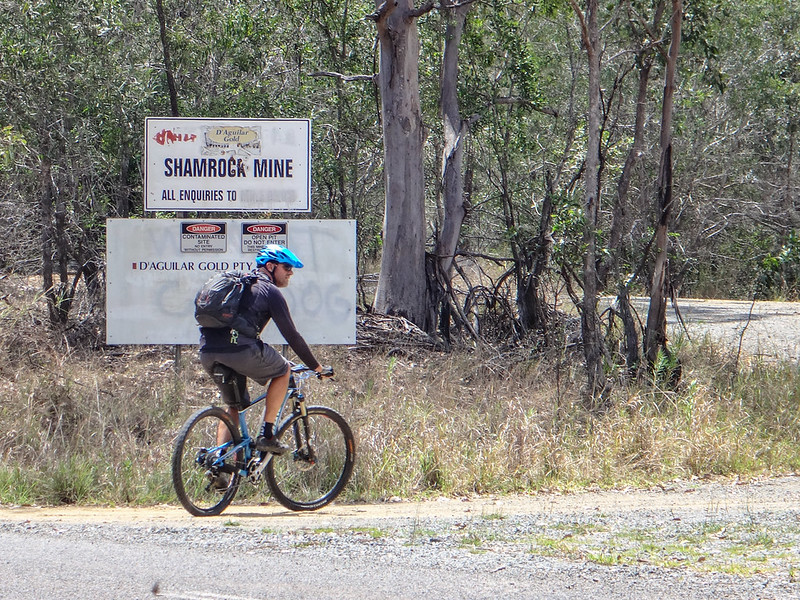 There was an abandoned gold mine at the top of the hill. 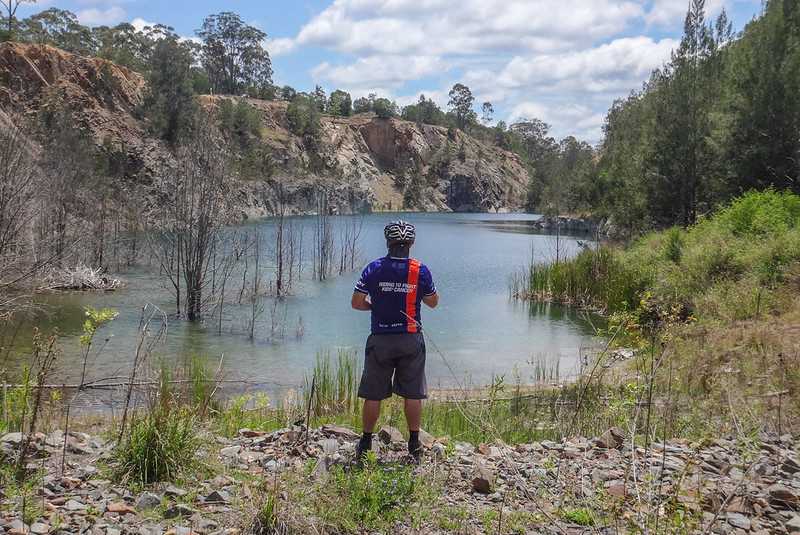 The open-cut mining operation has left a couple of large artificial lakes behind. 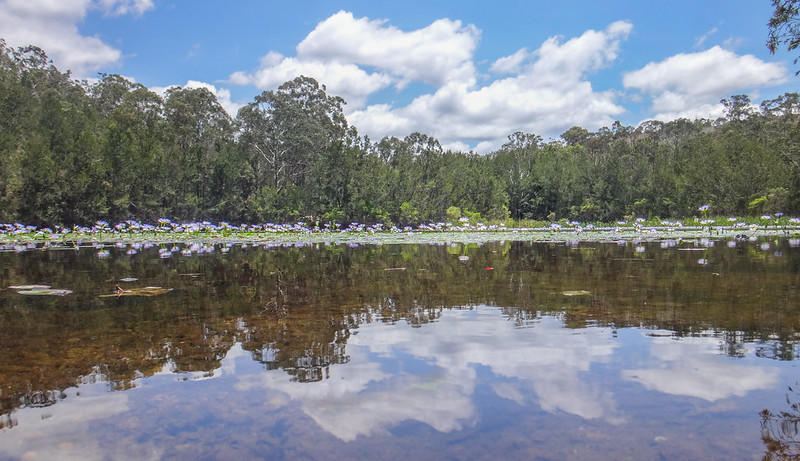 The second lake was covered in water lillies.  Eric told us we shouldn’t swim in the lakes at mine sites, so I resisted the temptation to take a plunge… 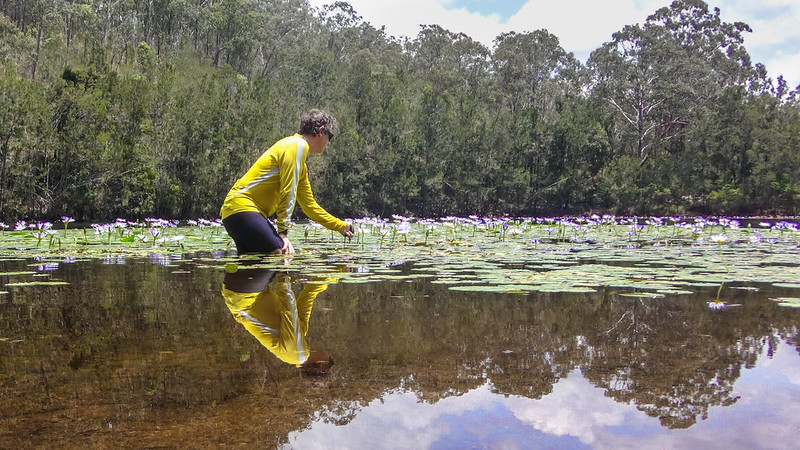 But I had a bit of a wade around in the shallows admiring the lillies. 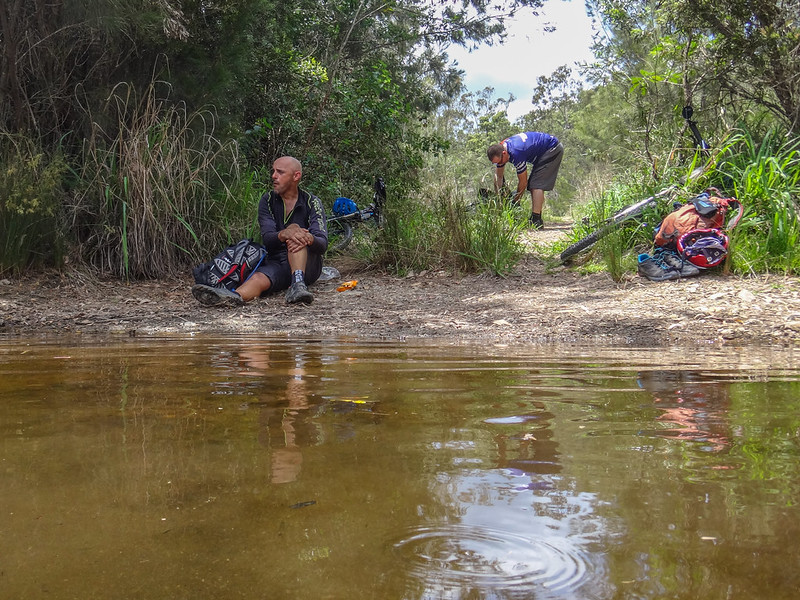 The day grew hot, and the cool shade by the shoreline was a perfect spot for a short snack. 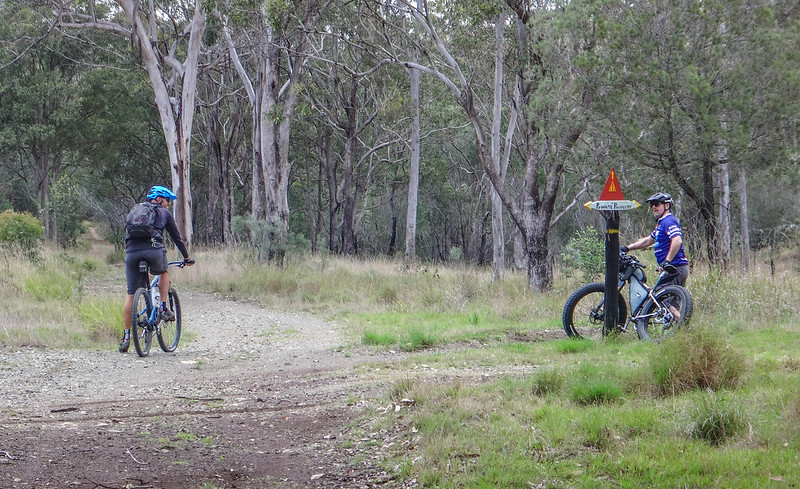 At this point we pointed our bikes eastward, and started following the BNT back towards Kilkivan.

The wide gravel road devolved into a pleasant narrow track which passed through numerous properties.

One landowner wanted to make it very clear where the trail went, so that travellers didn’t end up getting lost on his land. 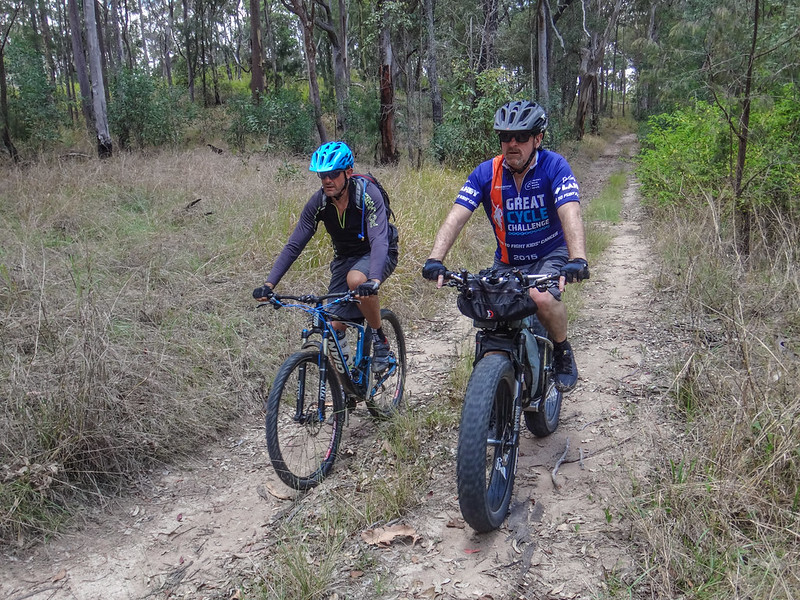 It started as a gentle downhill slope, but as we rode it, the trail grew steeper. 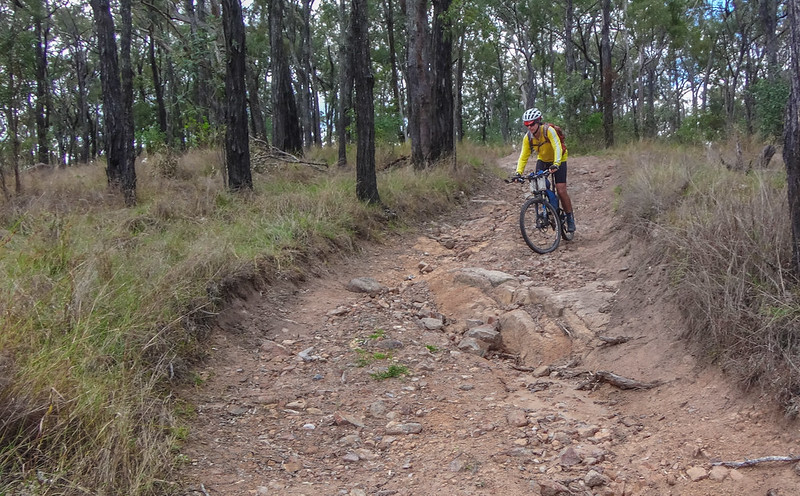 In one or two spots I wondered whether I should have dismounted and just walked down the hill.

I cautiously navigated around the tricky bits. 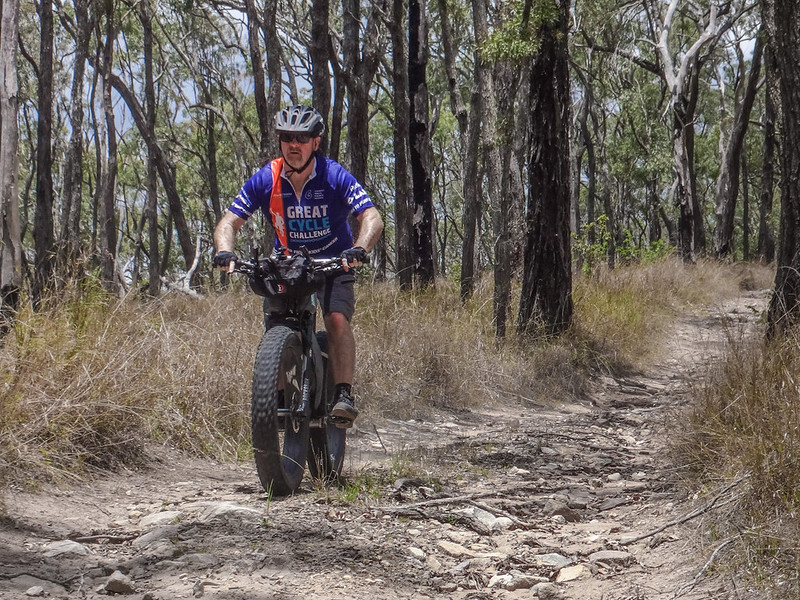 The huge tyres of Darb’s fat bike hugged the ground.  He powered down the rough trails without a second thought. 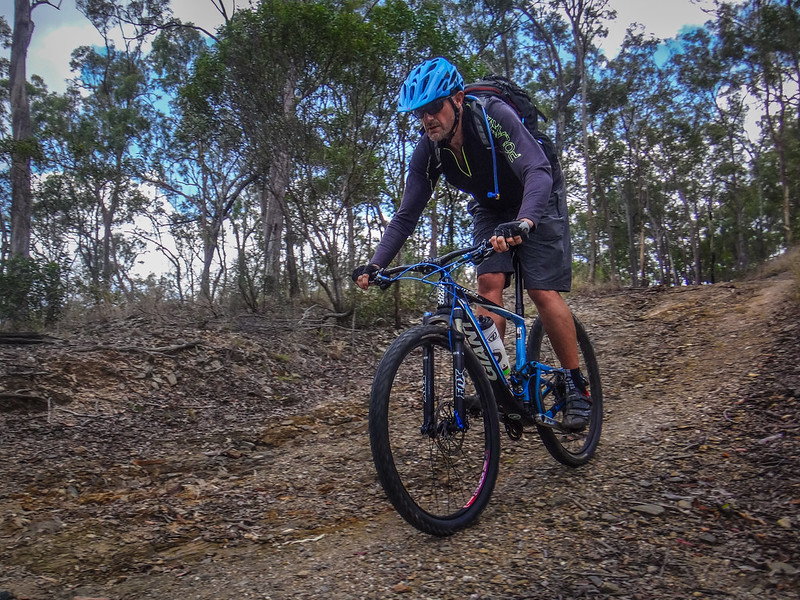 Paul followed closely behind.  His bike is similar to mine, but his super-powers allow him to ride downhill faster than I could. 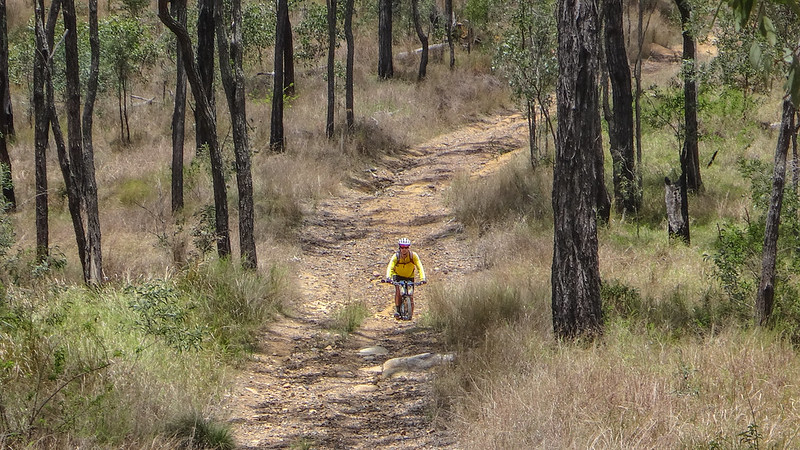 Thankfully we all reached the bottom in one piece – some of us slower than others.

At the bottom of the descent we crossed Fat Hen Creek (what a strange name).

There was once a copper smelter up the end of this valley.  Built in 1870, all that remains of it is a 16 metre tall stone chimney. 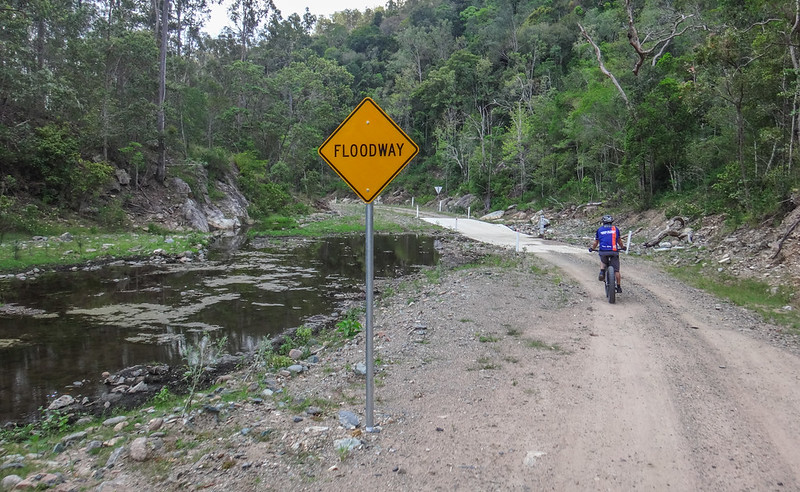 The final leg of our journey followed the creek north out of a long valley back towards Kilkivan. 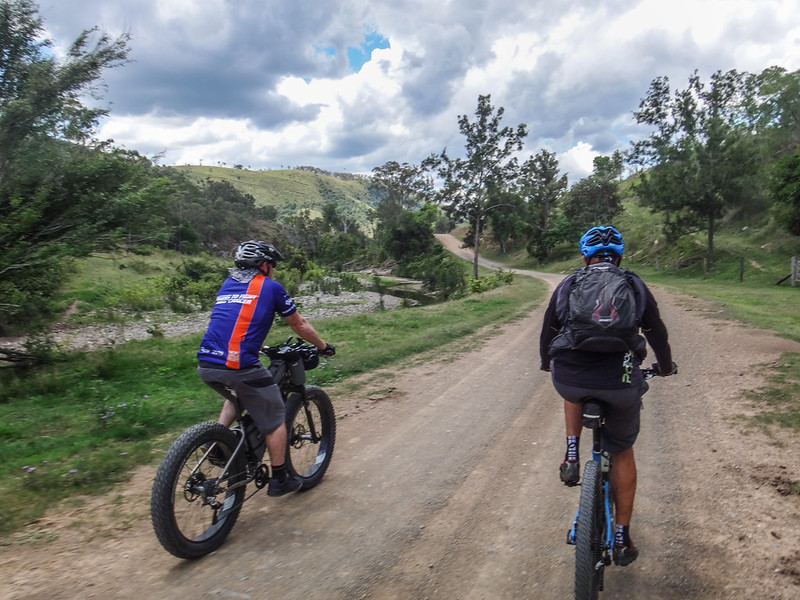 As we crossed the creek several times I thought that this might be a difficult place to get out of after heavy rain.  Thankfully the forecast rain today was holding off. 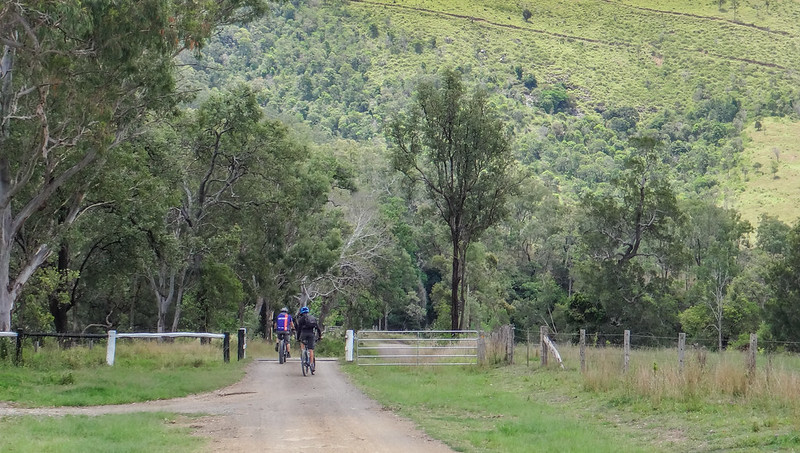 Hills rose up either side of the valley, but we were fortunate to have gentle gradients on the road.

As we approached Kilkivan my legs grew tired.  The remaining small climbs seemed ten times higher than they really were. 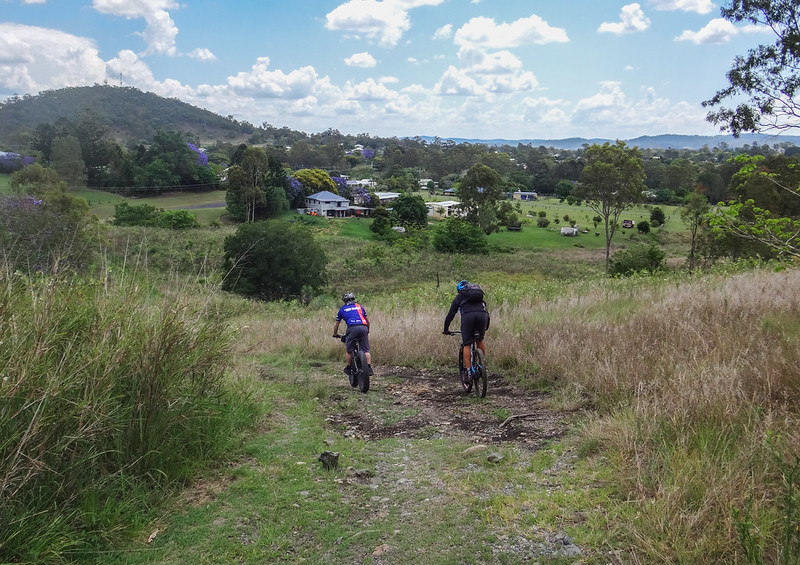 After one last climb, Kilkivan finally lay before us.  It was a relief to roll down the gentle grassy slopes into town. 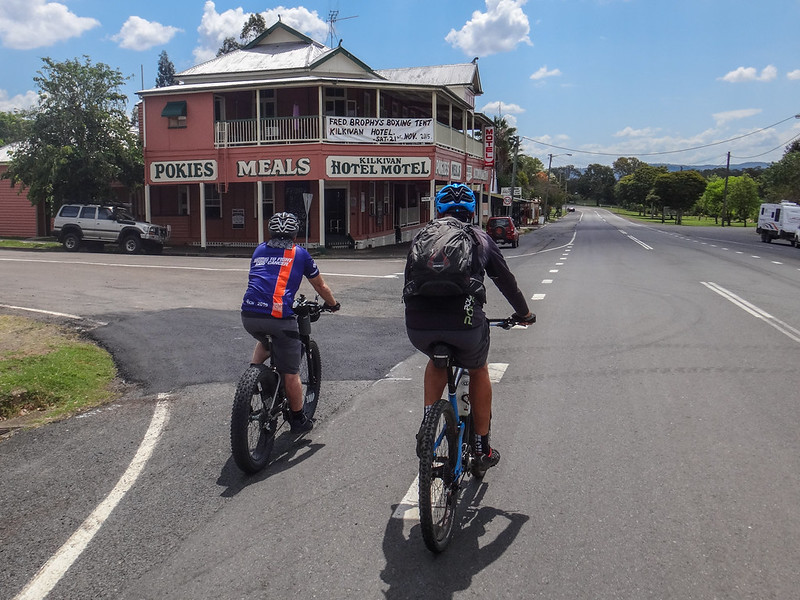 The big old friendly pub beckoned to us with promises of cold drinks and good food.  How could we resist?

The steep technical descent from Mount Clara makes this a challenging ride.  And while the last few hills at the northern end of Rossmore Road seemed deceptively small, they were difficult on a hot day after riding almost 50km.

Darb reckons this one rates 8 out of 10 on the tough-o-meter.  I’m a bit softer – I think it’s about 8.5.  We all agreed this would even be more difficult in the middle of summer.

This loop is more enjoyable done in an anti-clockwise direction.  I can’t imagine anyone enjoying the climb up Mount Clara from Rossmore Road.

Thanks Darb and Paul for another fun day out on the bikes!