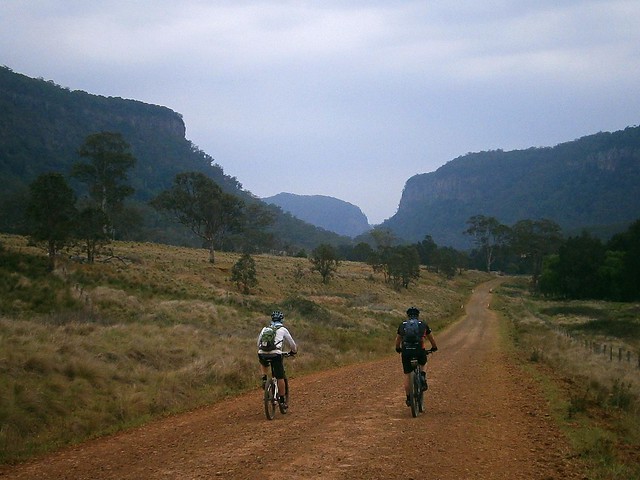 “The Head” is a spectacular spot up in the Great Dividing Range of South East Queensland, near the border. It gets that name from the fact that it forms the headwaters of the Condamine River and the Murrary Darling Basin. Starting as a trickle on the slopes of Mount Superbus, it flows through Condamine Gorge joinng up with the Balonne River, the Darling River and eventually the Murray River before draining into the Great Australian Bight near Adelaide in South Australia.

Today we were lucky enough to ride through some of this beautiful country in a loop from the small town of Legume, in Northern NSW up into Acacia Plateau, then along the Border Fence to “Head Gate” and back to our starting point via Condamine Gorge (also known as Cambanoora Gorge). 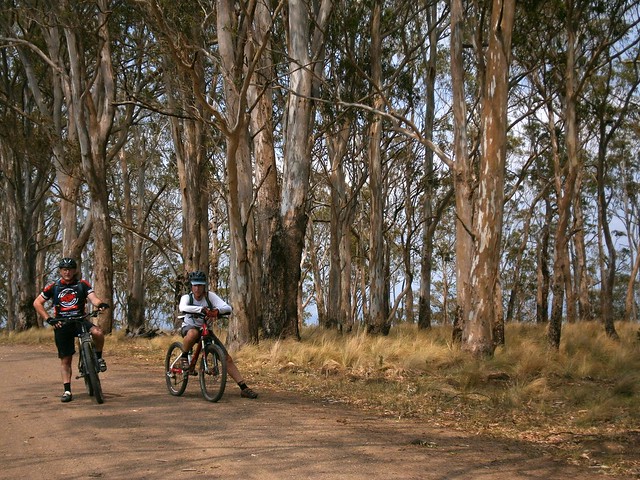 For the first hour of our journey we took a long slow climb up onto Acacia Plateau, while we battled swarms of flies. Thankfully Eric had the foresight to pack some insect repellant which kept the pesky insects away from our faces, allowing us to enjoy to majestic open blue-gum forest. 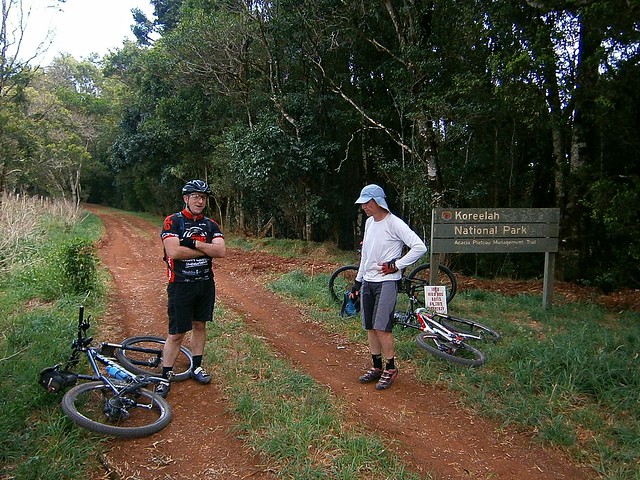 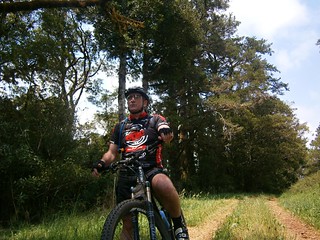 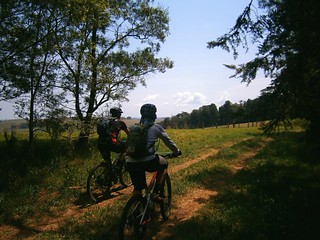 The rocky road eventually rises up to the “Border Track” following the rabbit-proof fence along the border between Queensland and New South Wales. At an altitude of over 1,000 meters, this section has thick rainforest on the NSW side of the fence and open farmland on the Qld side. I’ve seen similar scenarios at other places along the border (such as The Border Ranges) and it makes me wonder about the relative priorities of both states in their early years, and the importance of land-clearing to Queensland in the 19th and early 20th centuries. 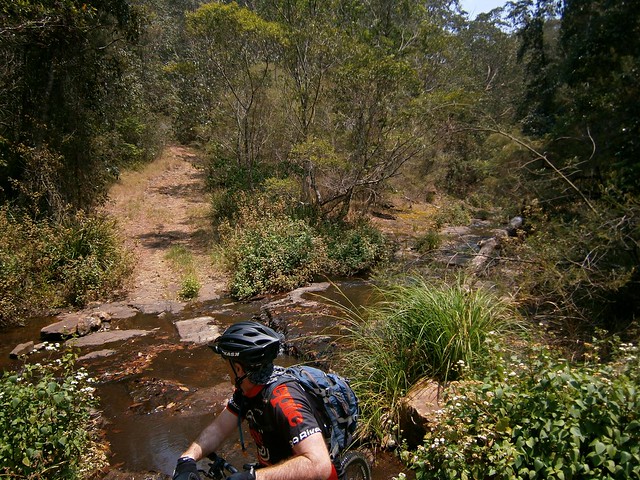 From the border track we dropped about 600 metres in altitude in the space of 8km. I don’t have any pictures of it since I was clinging on to my handlebars for dear life while I bounced down a rocky track, dodging stray logs and precarious ruts. The Trough Creek descent is a mountain bikers delight, but it’s rough. You need good suspension, and a reliable wheel / tyre combination. I suspect riding this on a cheap bike would result in pinch-flats and crashes.

I got to the bottom yelling out “Wow, that was awesome!” 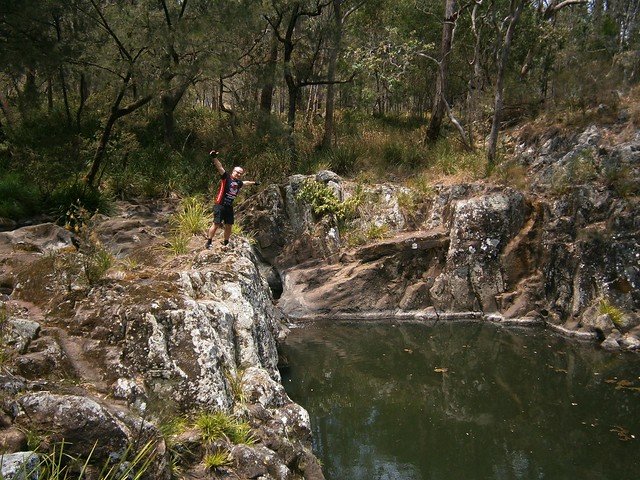 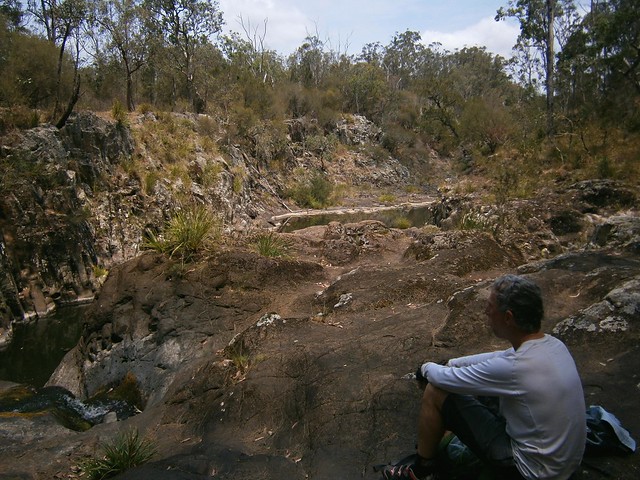 A few minutes later, after bouncing down some more rocky roads, we eventually reached the rock pools at Koreelah Creek, where we stopped for lunch. 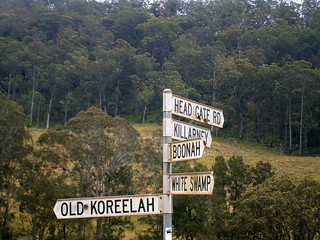 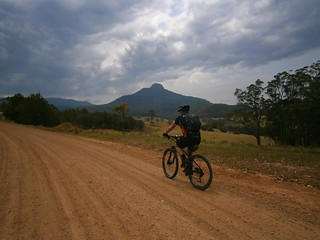 “White Swamp” marked the lowest elevation point of the ride. From here we faced another long slow climb up to “Head Gate” – the Qld / NSW border crossing. 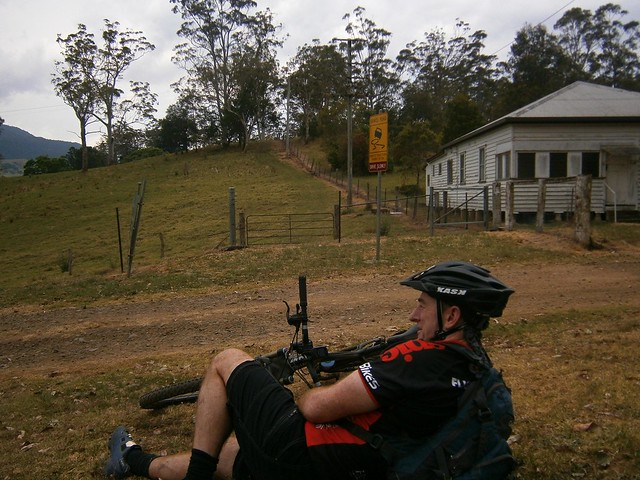 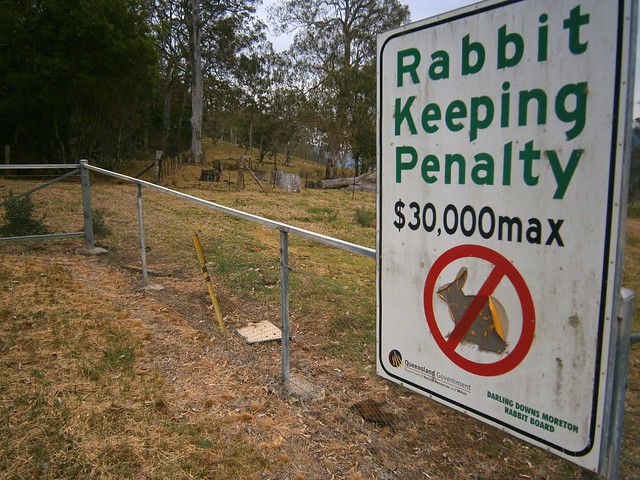 “Head Gate” is a secluded border crossing in the middle of nowhere. It boasts a dilapidaed house, and a shed. If you stand in NSW and look north to Qld, a huge sign tells you how un-welcome rabbits are. In fact, if you try to keep rabbits in Qld, you’re liable for a $30,000 fine. If you stand in Qld and look south, you’ll see a similar huge sign wich tells you you’re not allowed to take livestock into the state along that road.

For us it was a welcome place for a short break. It was also a reminder that we had stopped our long climb and could look forward to some more descending. 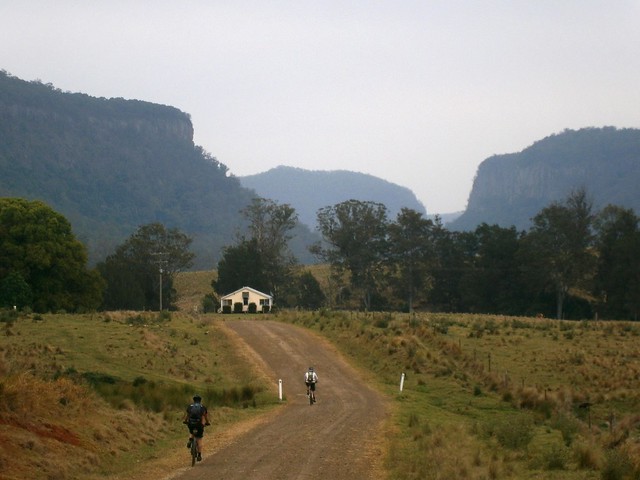 As we rode along Condamine River Road, we enjoyed some amazing views of the Gorge. 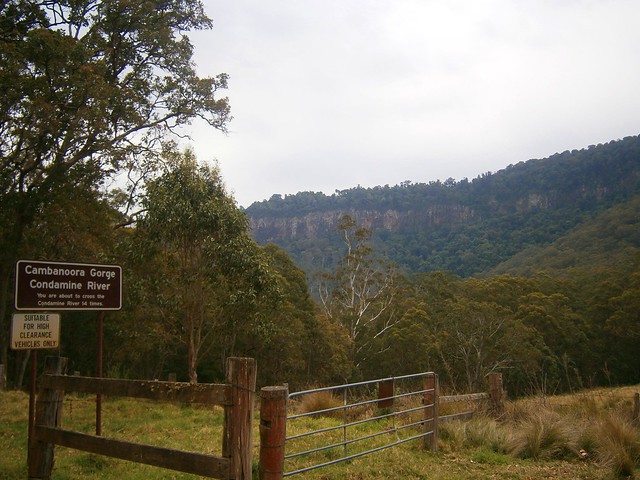 Like the sign says, if you go along Condamine River Road you need to be prepared to cross the river 14 times. And they’re not just shallow little crossings, they’re deep, and you’re definitely going to get wet. 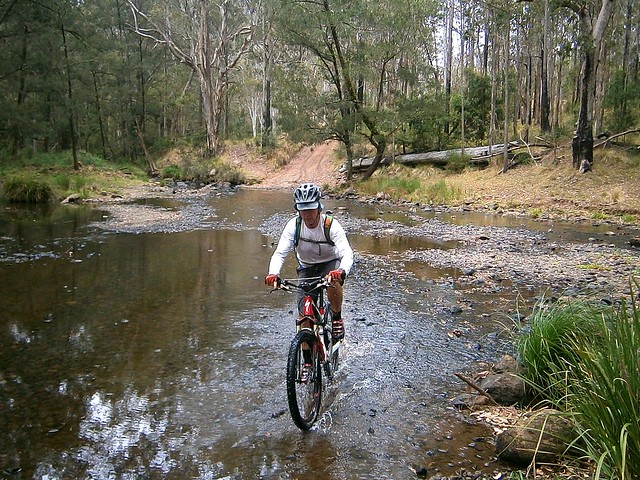 We rode through several crossings. Eric showed us how it was done. We waded through the rest of the crossings, carrying our bikes. Normally I hate getting my feet wet. On this trip, I just accepted the fact that it was going to happen, and didn’t worry about it. I actually discovered that it’s not that bad riding in wet feet – provided it happens towards the END of the journey and not the start 🙂 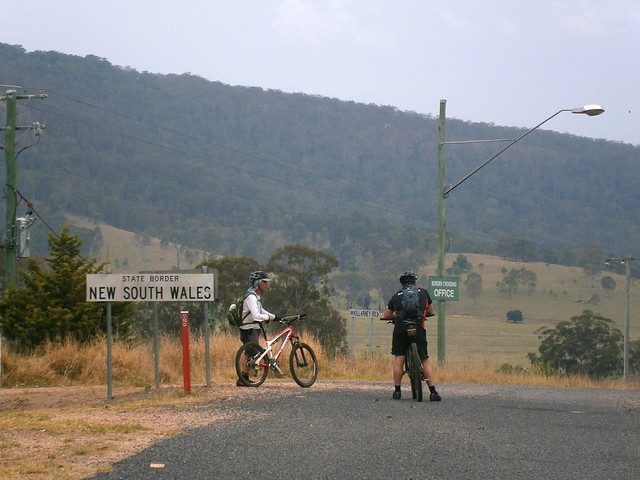 Once we got to the end of Condamine River Road, we headed south along the bitumen, across the border again, and back to our starting point at Legume. 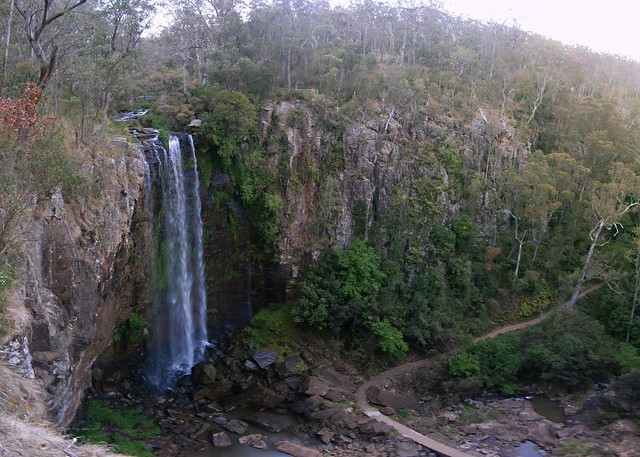 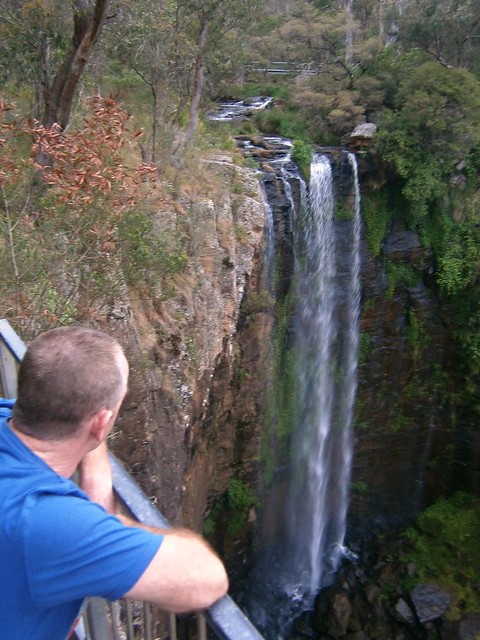 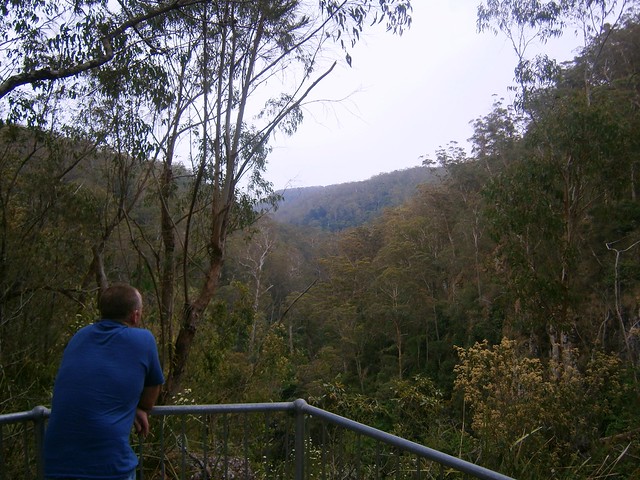 Our route took us in a big circle, in the middle of which was Queen Mary Falls. Since we didn’t actually ride to that point, we decided to drop by in the car on the way home. The falls are only a five minute walk from the car park on Spring Creek Road, so it was worth the detour.

We also stopped at Carrs Lookout where we were gobsmacked by the views of Mount Superbus and Wilsons Peak.

What a stunning way to finish the day.

All up we rode about 64km in 6 hours including breaks. We ascended 1,450m and I burned 3,700 kcal. The ride has two tough climbs, one sketchy descent and numerous river crossings. It also involves a three-hour each way drive from Brisbane. I’m giving it 9 out of 10 on the tough-o-meter. You need medium to high fitness, medium skills, a good bike, and some good riding buddies. Be careful after rain as the river crossings may be impossible to ford – which means a long detour. Take lots of water in Summer – it is hot work. Take lots of snacks.